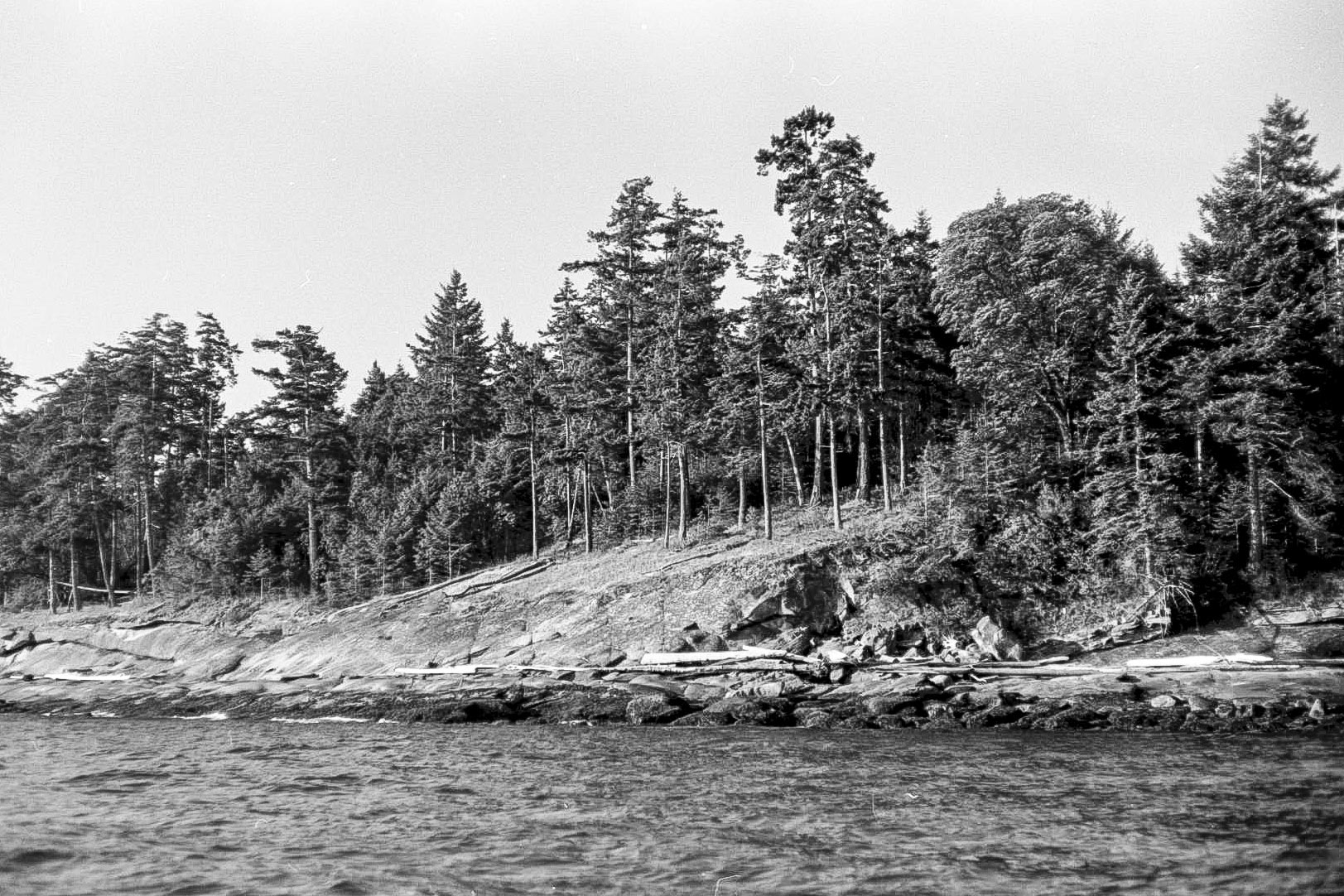 The front of our Valdes  property when we first saw it about 1971. 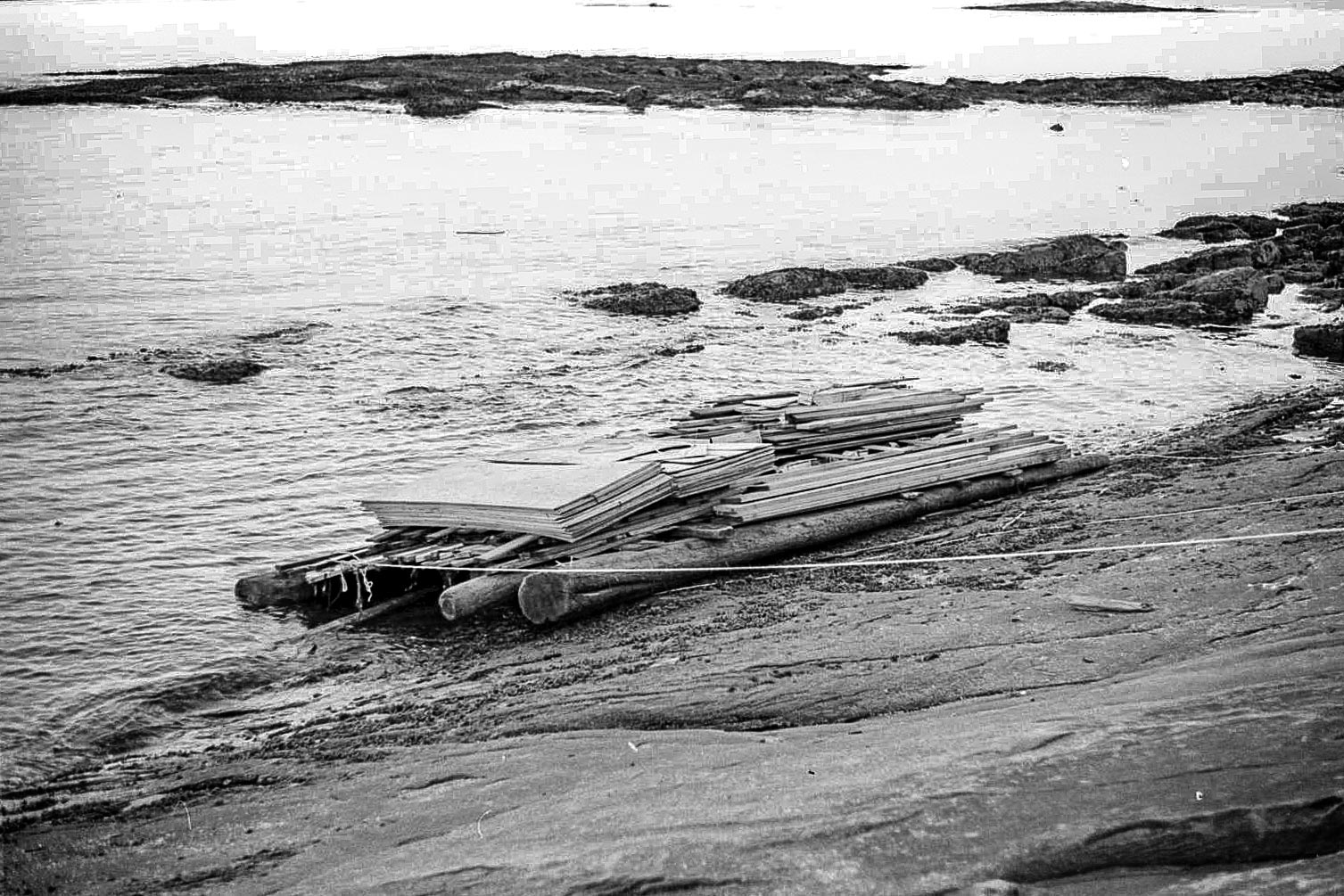 Dad assembled the building materials we needed at the North end of Galiano and towed them to the beach in front of the meadow where we built the cabin. 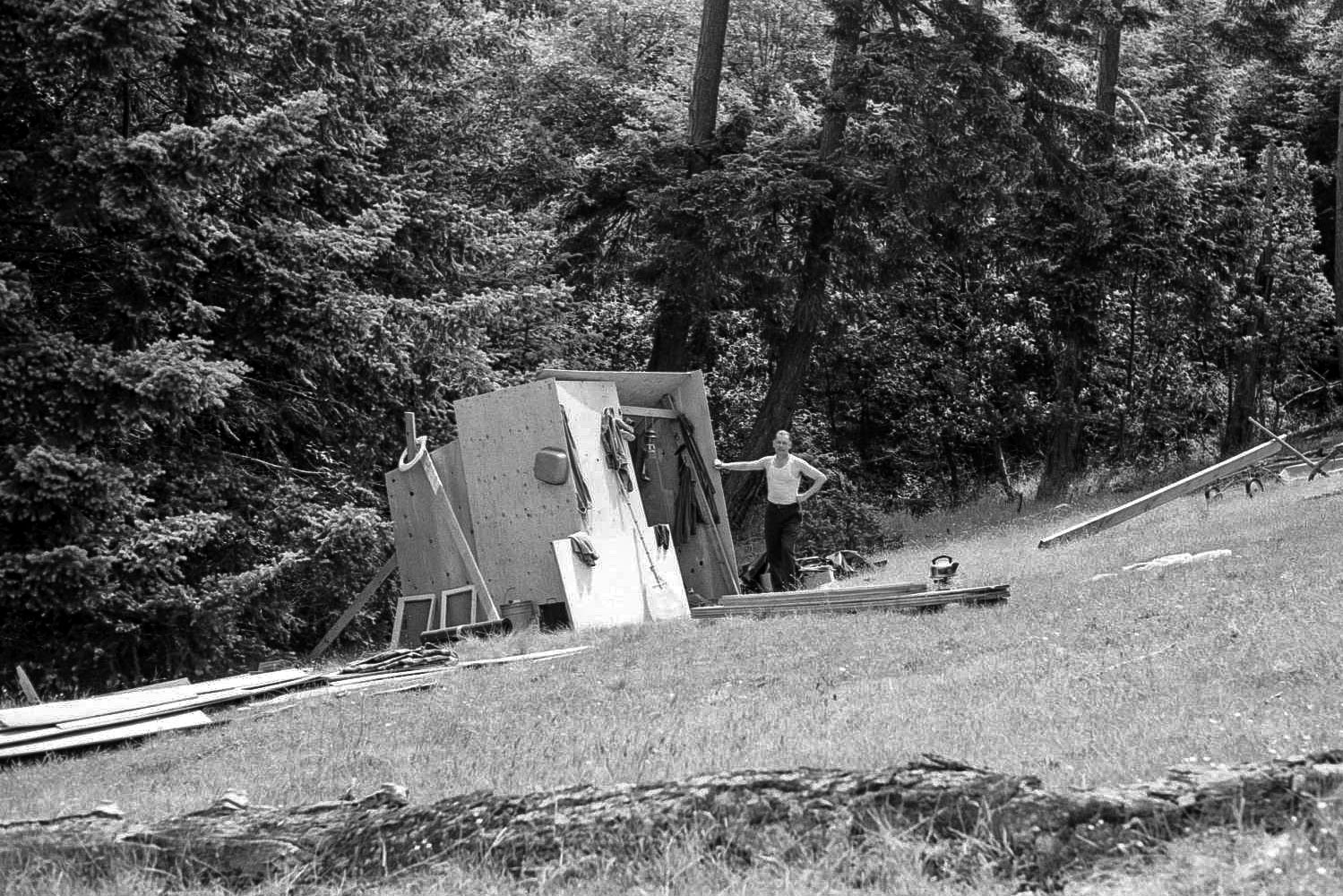 We moved the building materials off the beach and built “Habitable Dwelling No. 1” where we slept while we worked on the cabin.

In our original lease of the Valdes property there was a clause that required, as a condition of the granting of the lease, that we build a habitable dwelling on the land within two years, or maybe it was one year. But we had to build something. This was no easy thing as there was no ferry service to the island.

Dad and I talked about it and I sketched out a design and actually built a cardboard model of it. Once we settled on a design Dad began prefabricating the cabin in his workshop at home so that it could be assembled on the island without power tools. But getting it there was another thing.

With the help of his friend Cliff Taylor he then transported all the pieces to the North end of Galiano Island to the dock on the Indian Land there. He and Cliff assembled logs from the beach into a raft and then put the cabin lumber on it and lashed it all together. He then towed it across Porlier Pass and up to the beach in front of the meadow up to the building site. I believe it was Lloyd Detweiller and his boat that helped with that stage. I am not sure because I was not there that week.

You have to remember that in 1971 or 72 there was literally no one on the island and getting there was not easy. I know there was one cabin in Starvation Bay and one on Porlier Pass but I don’t think there were any others. The island was quite wild.

We discussed the building site. There was an excellent level spot at the front of the property on the North side. However, at the time my children were small and we were afraid of the water and the very steep bank. We would never be able to relax with the children playing out front of the cabin. On the other hand, the property passed through the meadow that ran up from the water and there was a good level spot there that would have a view of the water down the meadow and lots of space for the children to play. It was this spot we chose.

It was Grandpa that did most of the building on the cabin. I was working and had trouble getting away and he was anxious to get the cabin done. He was really into it and enjoyed going over to the island. On one occasion he went for a whole week by himself. Because all of the leaseholders were friends or family of Lloyd Detweiller’s (he was called “Det”)  Dad knew people over there and he was able to spend time with Det who was also planning for his cabin 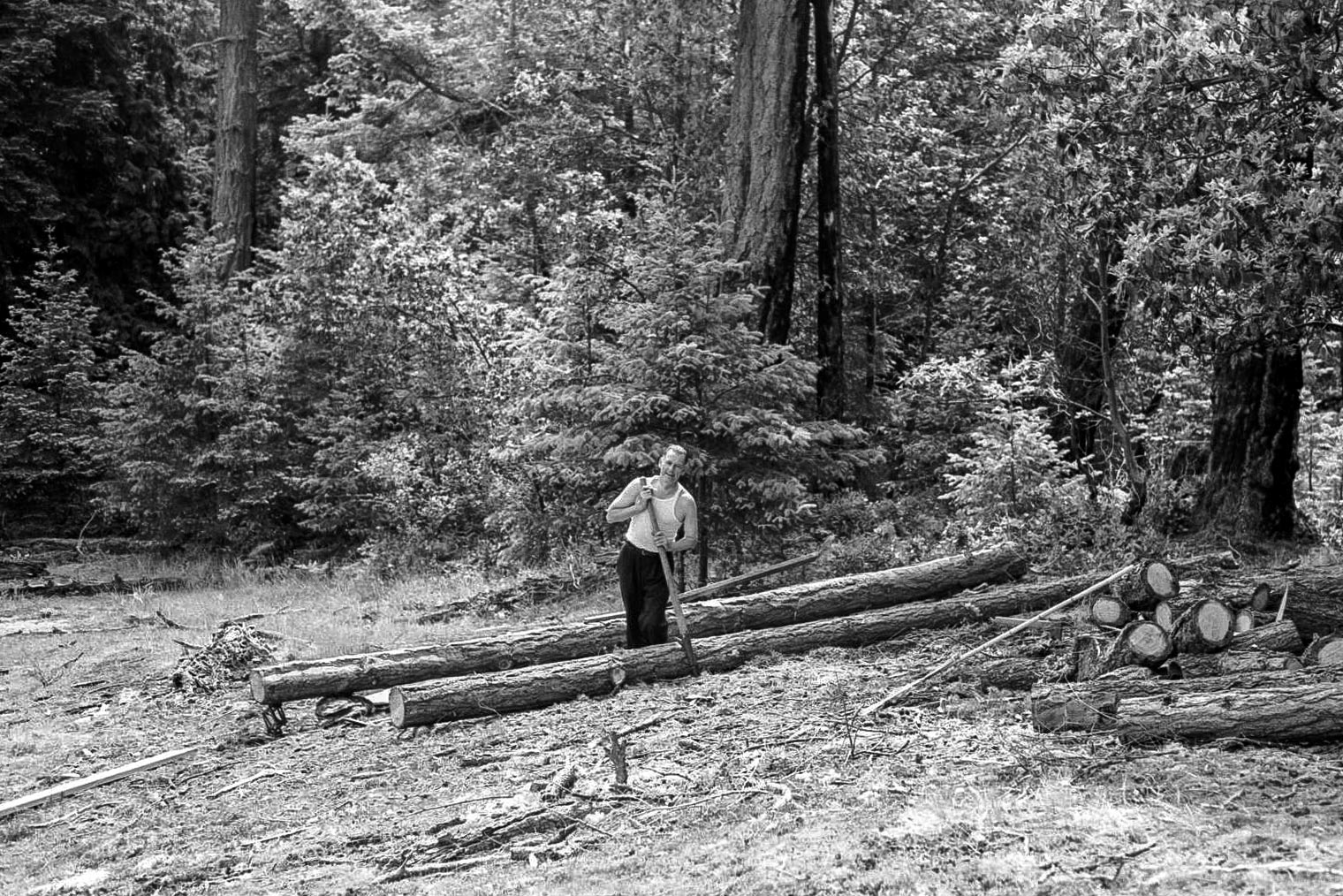 We built the cabin on two trees we felled. The logs were placed on top of rock cairns, the tops of the logs roughly leveled and then 2×4’s nailed on the top and shimmed to give a very level building surface. However, we did not skin the bark off the logs which was to come to haunt us. But I don’t think we were planning for fifty years down the road! In this picture Grandpa is leaning on a peavey which I think is still in the cabin.

Once the logs were in place and leveled the joists were laid across them for the floor of the cabin. Those joists were heavy and carrying them up from the beach, two slung between us by ropes over our shoulders, was a chore! 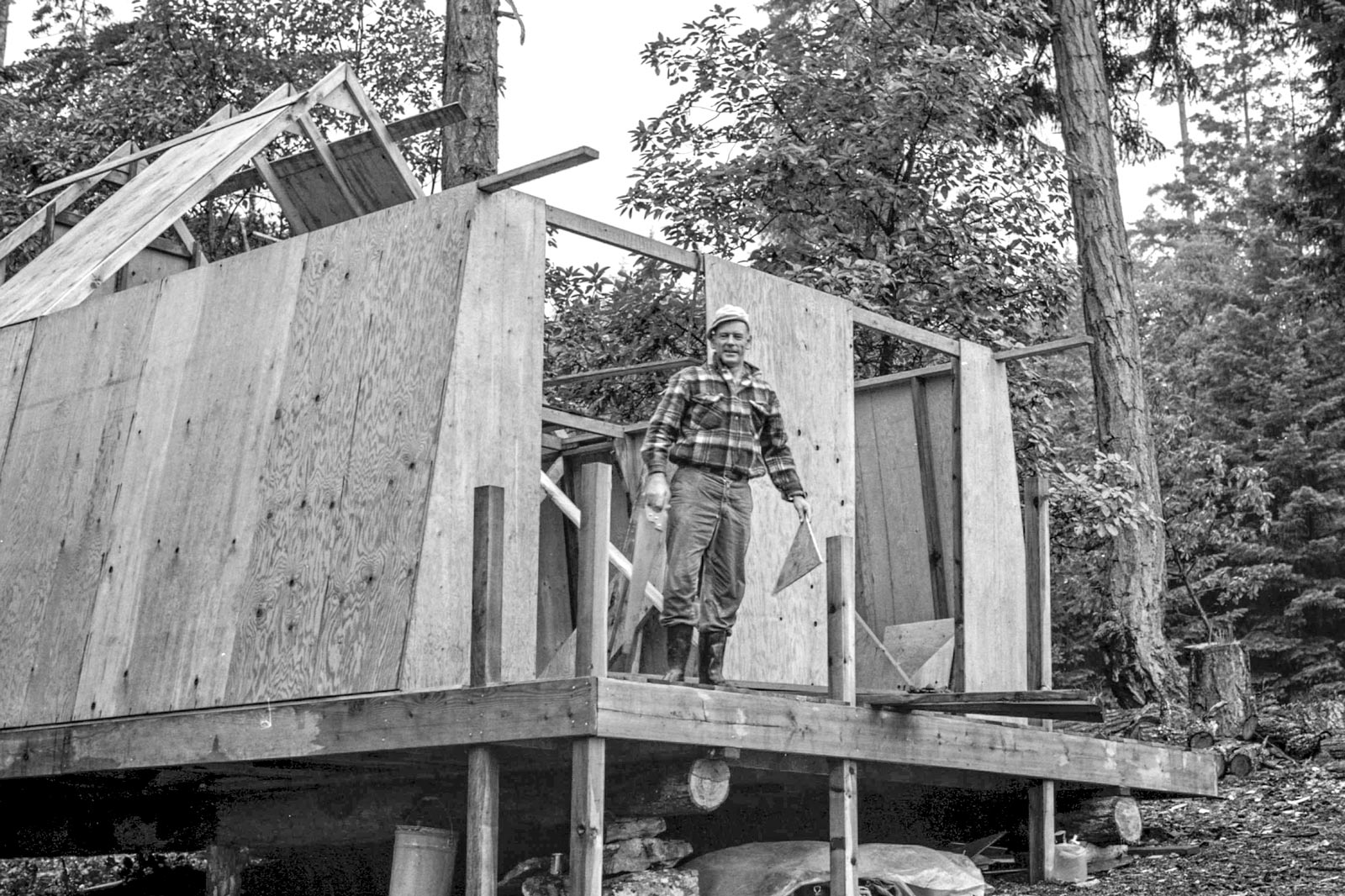 Dad did most of the construction. I went over as often as I could and helped lifting, handing him tools and nailing boards. 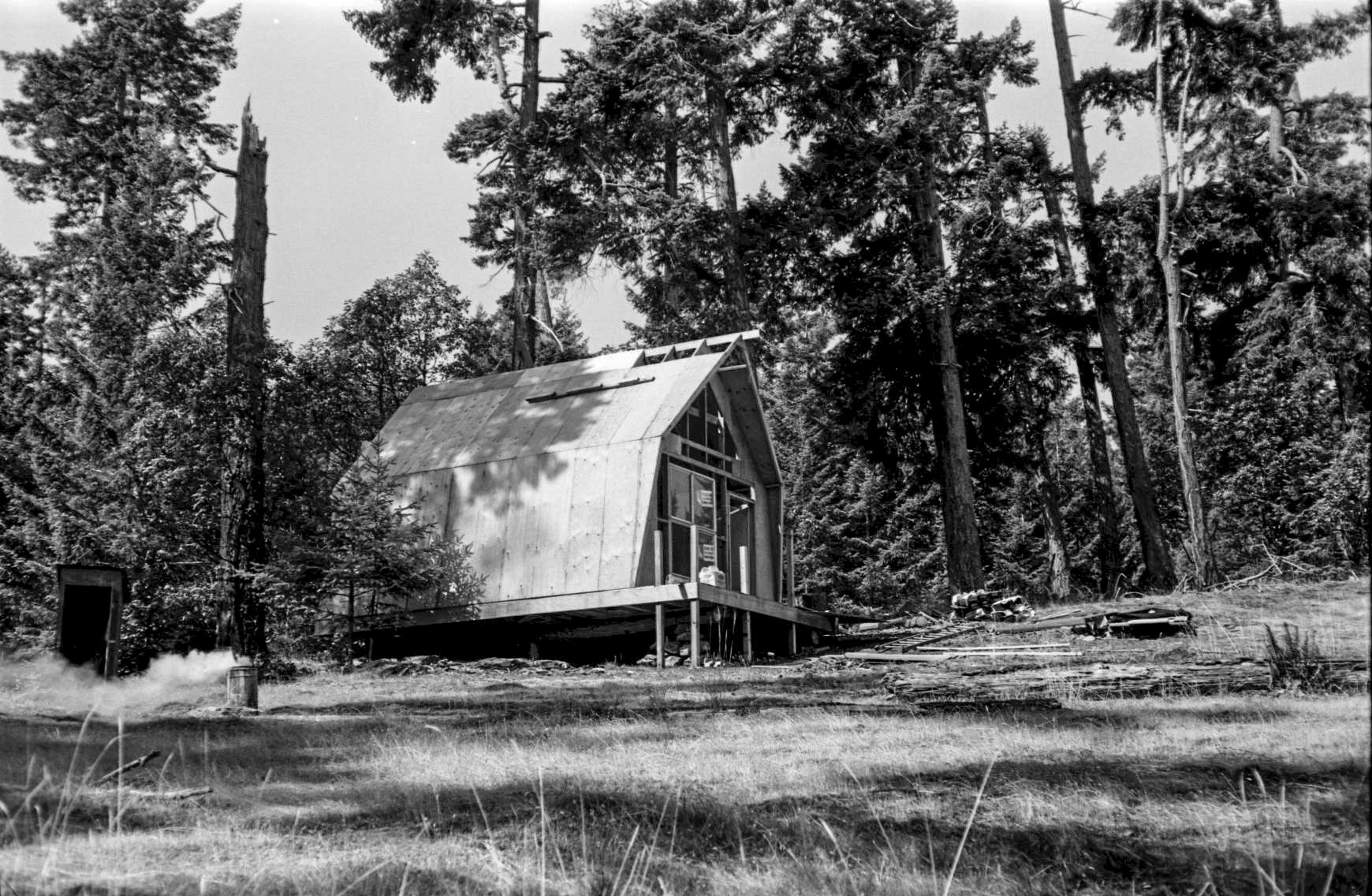 Here the roof is almost complete but the side windows are not in and the shingles are not on. 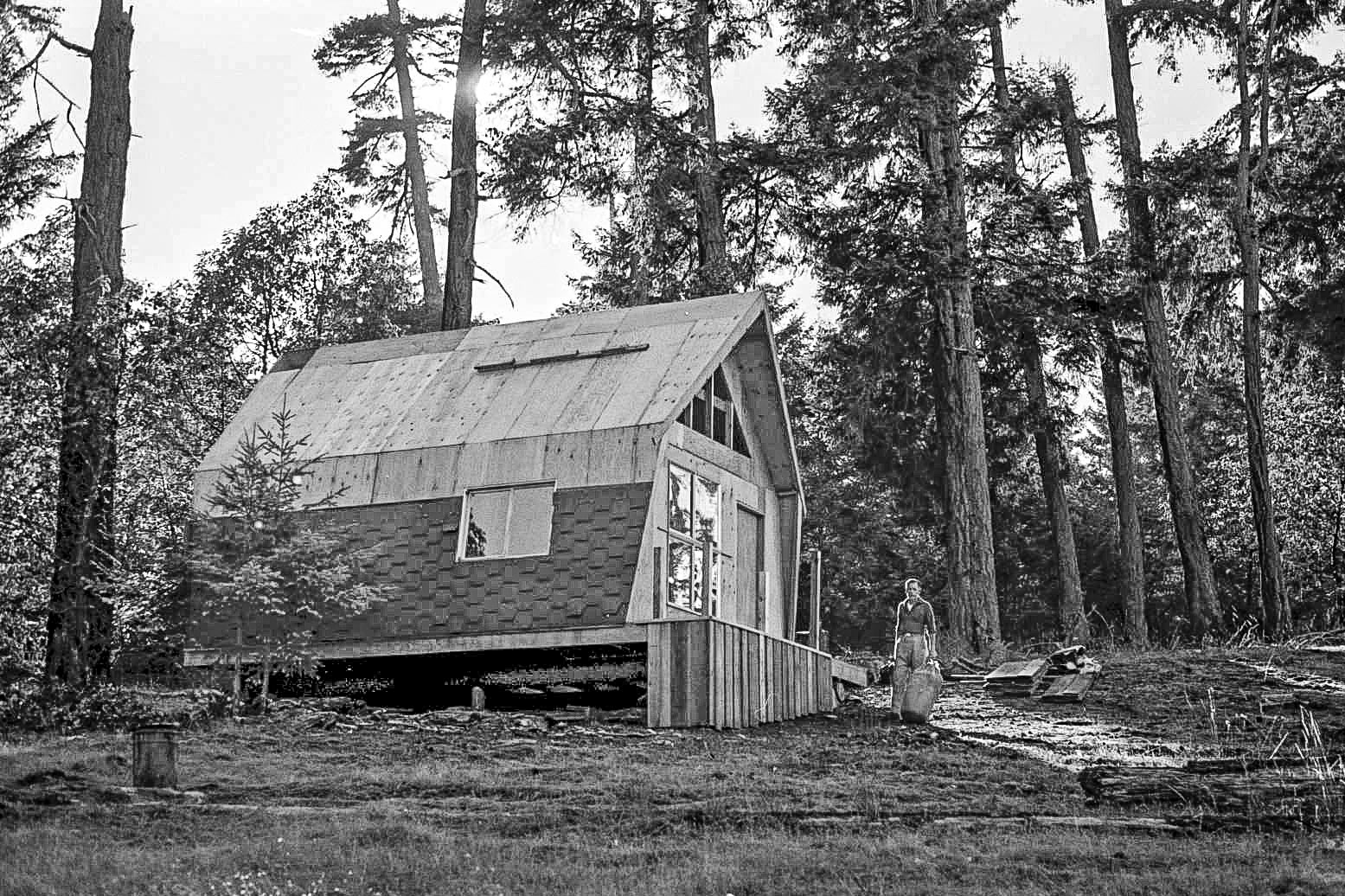 The side windows were added once the roof and walls were done. In this picture we have begun to add the shingles which covered the cabin. 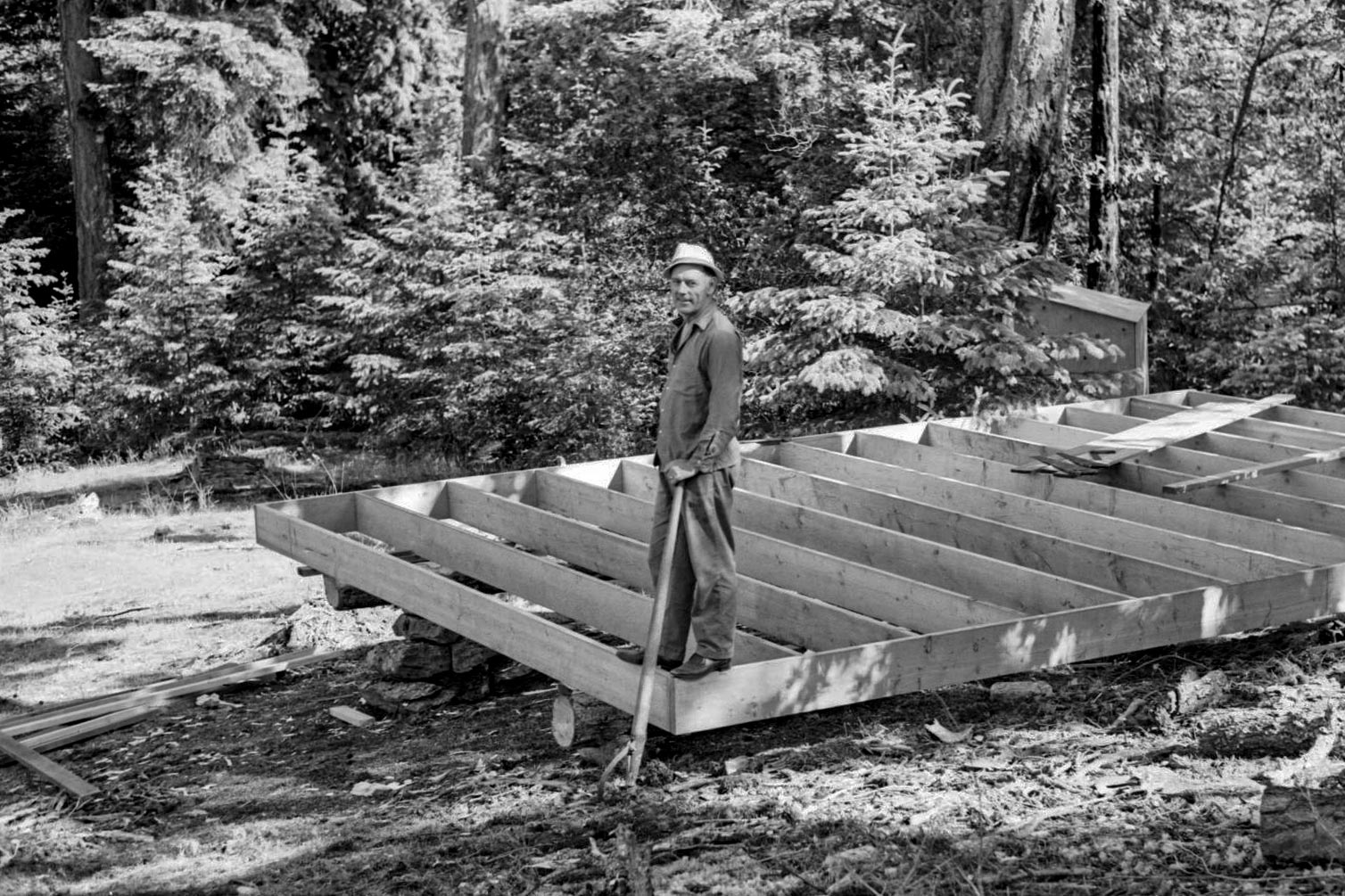 Once the joists were all in place we were able to begin the flooring and erecting the walls. In the background, to the right, is the outhouse which was used during the building as a tool and storage shed. 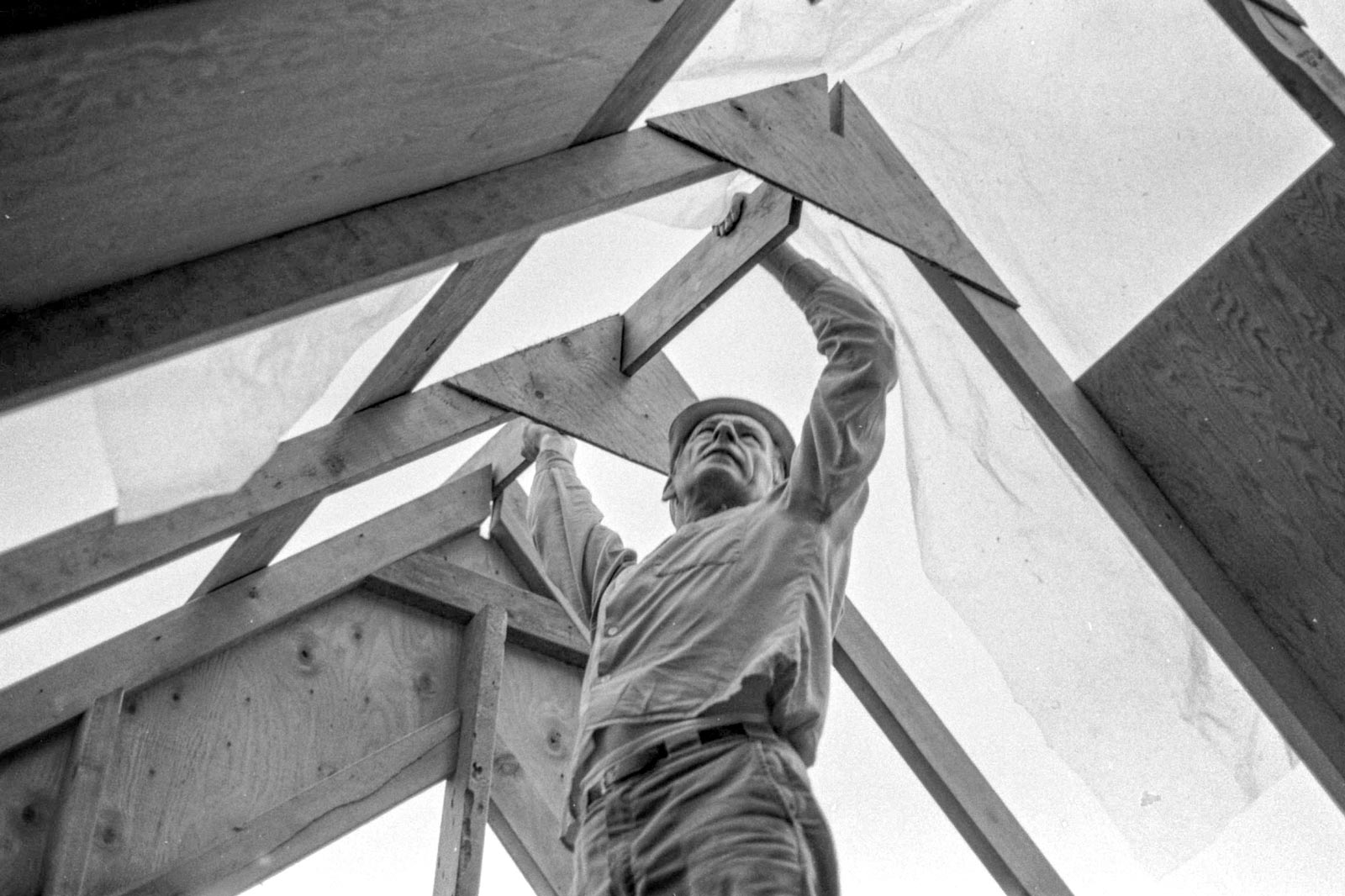 You can see here the precut boards and gussets that Dad had prepared at home.  Once on the island it was just a matter of assembling it.

It seems strange now but in those days before so many feet were tramping along the trails, walking anywhere on the island was difficult. The walk from our cabin to Oyster Bay, now Noel bay, was along the front by the water and there were spots where it was difficult. I had bought a bush knife and Dad used it to hack a trail through to the bay and he blazed trees along the way so you would not get lost. In those days the salal was six feet high and impossible to push through.

Eventually he found a way to go from the small meadow behind the house down to the meadow at Oyster Bay but that took a lot of clearing. Again he blazed the trail because there was a real chance of getting lost. That is hard to imagine now.

The other way, the walk to Starvation Bay was almost impossible. You had to stick to the shore all the way. The easy trail that exists now was not there. In the trees everything was blocked by salal. That salal seems to have all but disappeared and it is hard to envison it now.

For water we had to carry it from the little stream by the cabin in Starvation Bay. That was a half day chore and that water was heavy! We tried to bring enough from home but if you were staying more than a day or two, that was difficult. We put an old cedar eve trough along the bottom of the south wall of the cabin with a barrel at one end and that went a long way to easing the water problem. Just take some water, pass it through a coffee filter to get the critters out, and then boil it. Surviving on Valdes in those days was a challenge and it was actually fun.

At first we had no stove. Getting something so heavy and awkward was not something we could have rafted over as we did the lumber. Lumber floats and stoves don’t. 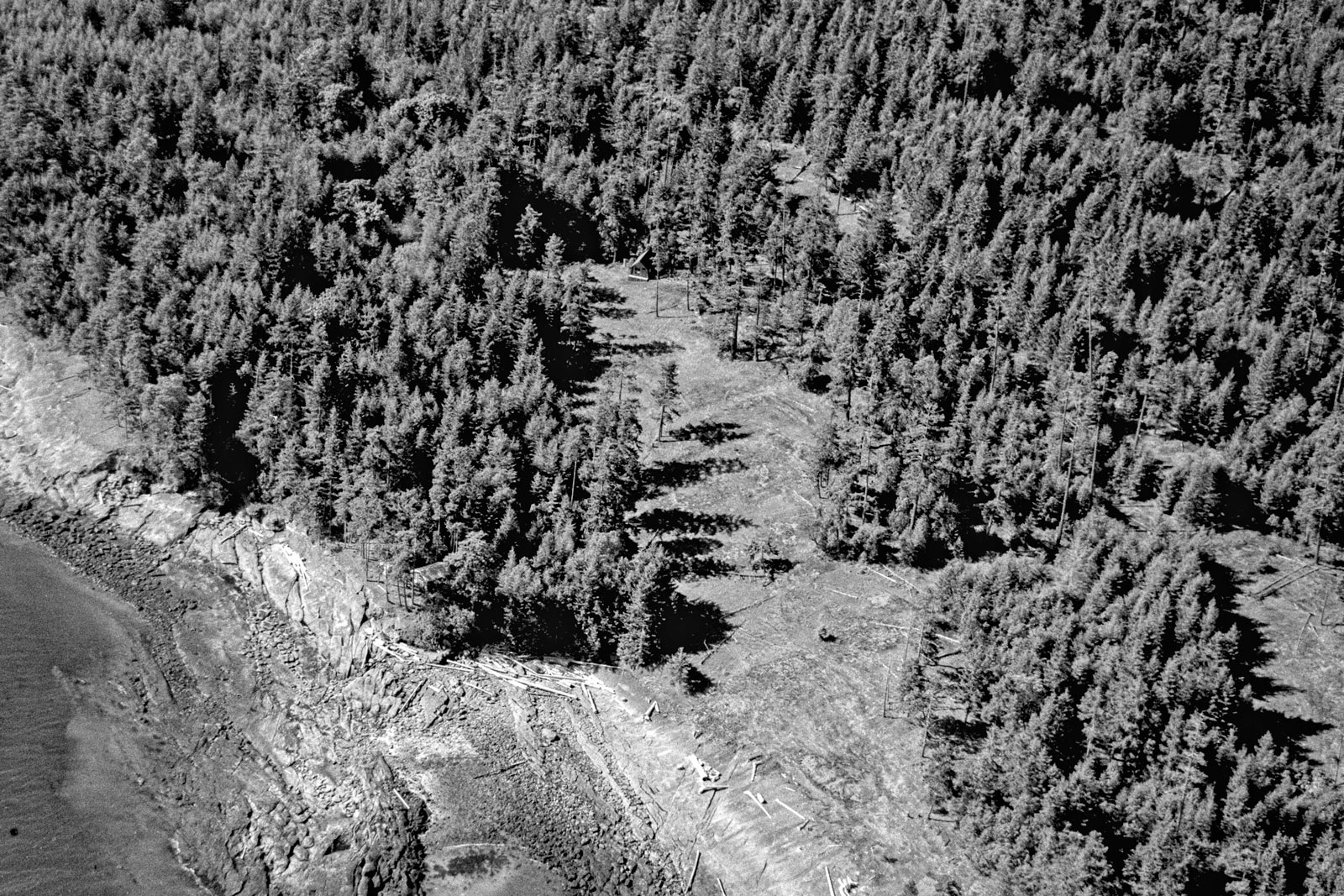 If you look at the top of the meadow you will see the new cabin. This was before the Johnson’s, the Pedersen’s or the Rivers built their cabins. We were alone and in the early years we seldom saw anybody passing by.

Dad was having fun. He closed in our cabin, put shingles on it, and then looked around for more to do. Det wanted to get to work on his own cabin and some of the other lease holders were interested in starting as well. So a few years after our cabin was done, I can’t recall how many, Dad and Det began planning for his cabin and there were other lease holders who were interested as well. And we still needed a wood stove.

I am not sure of the details but Dad and Det began arranging for a tug boat to bring a barge to the island with building materials. I believe when the barge finally arrived, I think in around 1974, there were five cabins on it plus a stove for our cabin. And the weekend it was coming to the island a work gang was present to off load the barge and to secure the materials on shore as best we could. 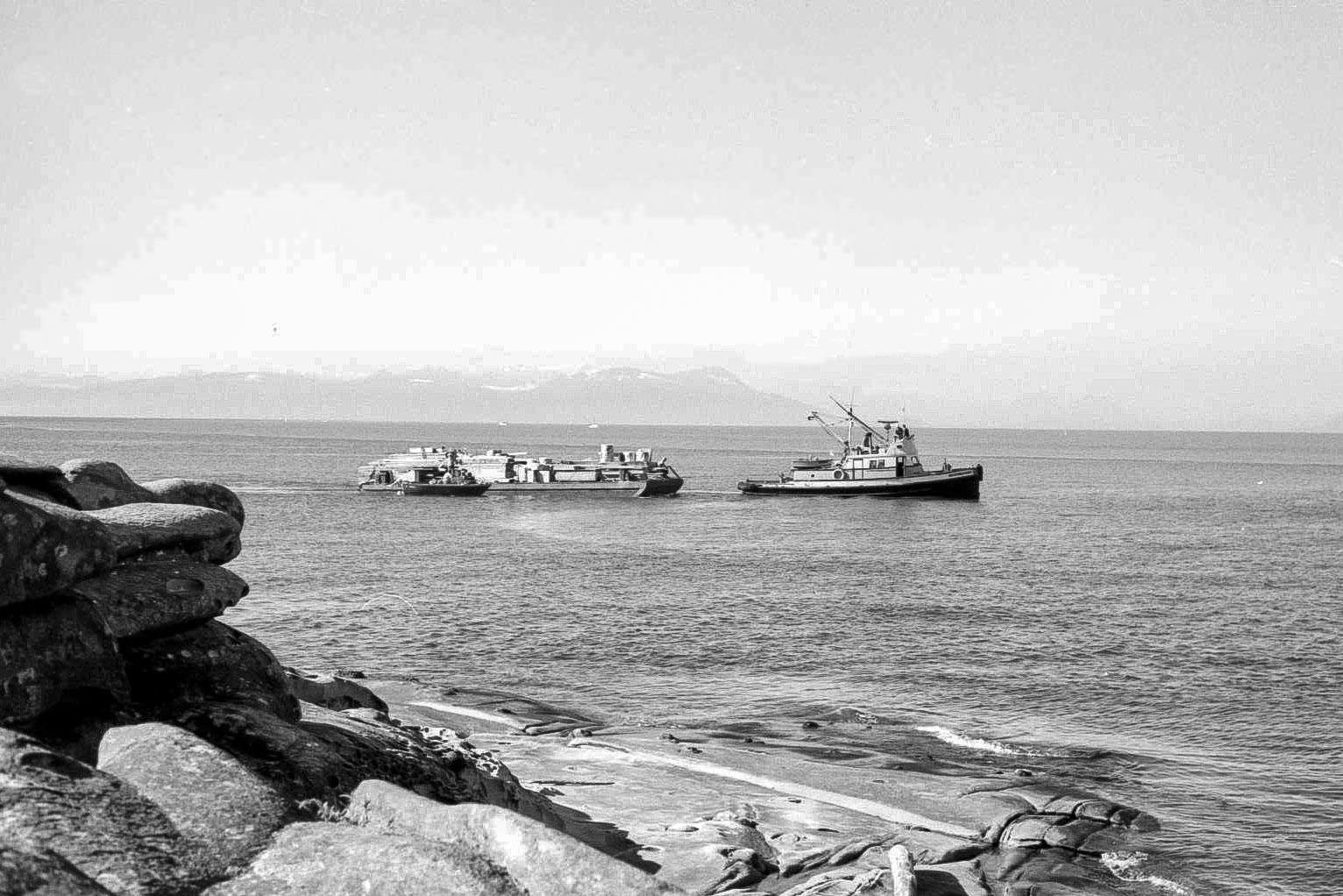 The “Virago Point 2” arrives at Valdes Island with a barge loaded with building materials for five cabins. 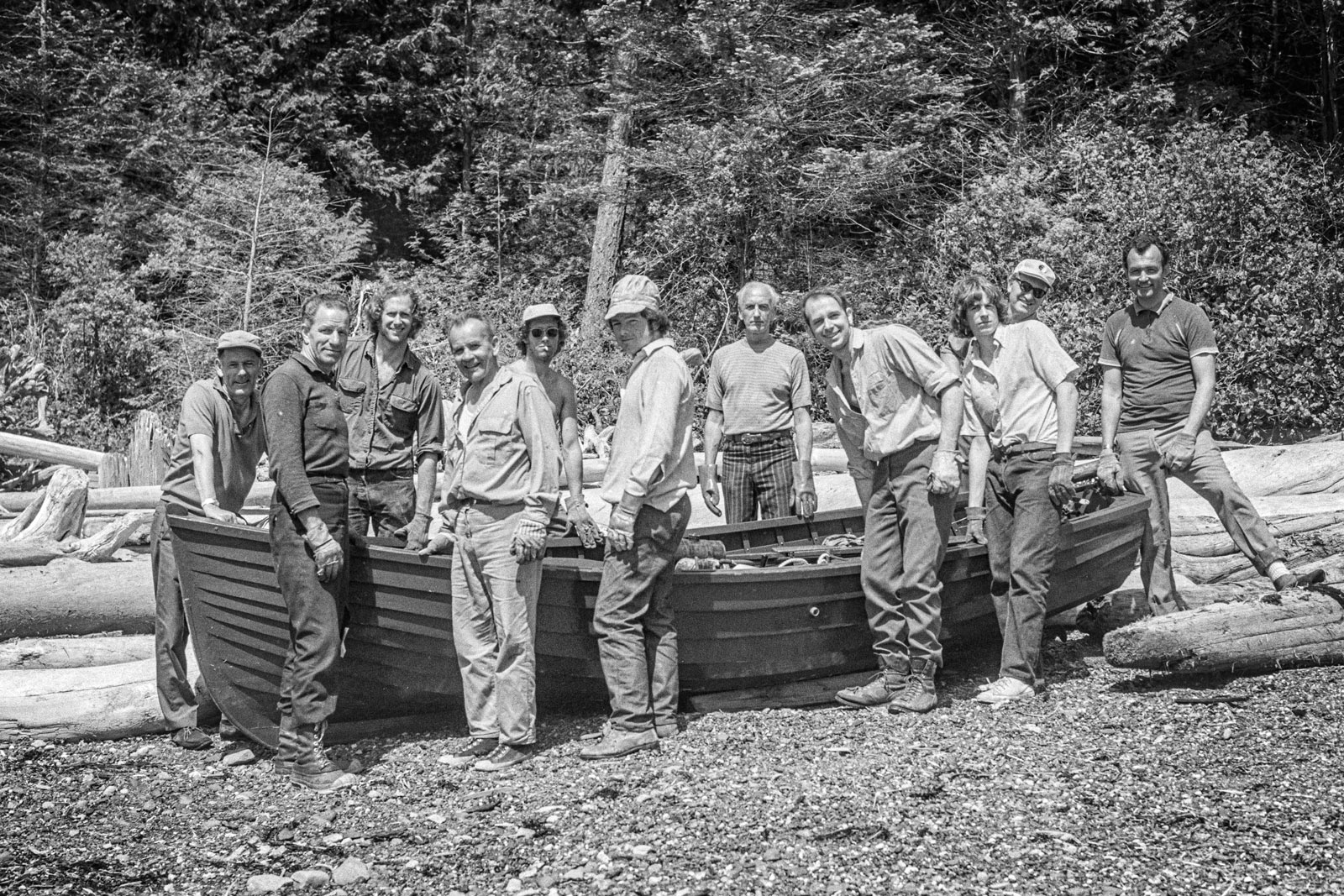 Here is the Barge Weekend workcrew. On the extreme left is Grandpa Bill and next to him is Lloyd Detweiller (Det) and then there is Cliff Taylor who was helping Dad all along. The names of the others are lost to memory but I believe the fellow on the far side of the boat in stripped pants was Kirk Oviette. I may be wrong on the spelling of his name. Kirk had the property that included the point on Oyster Bay. We dropped his building materials off and never saw him again. He never did build his cabin. 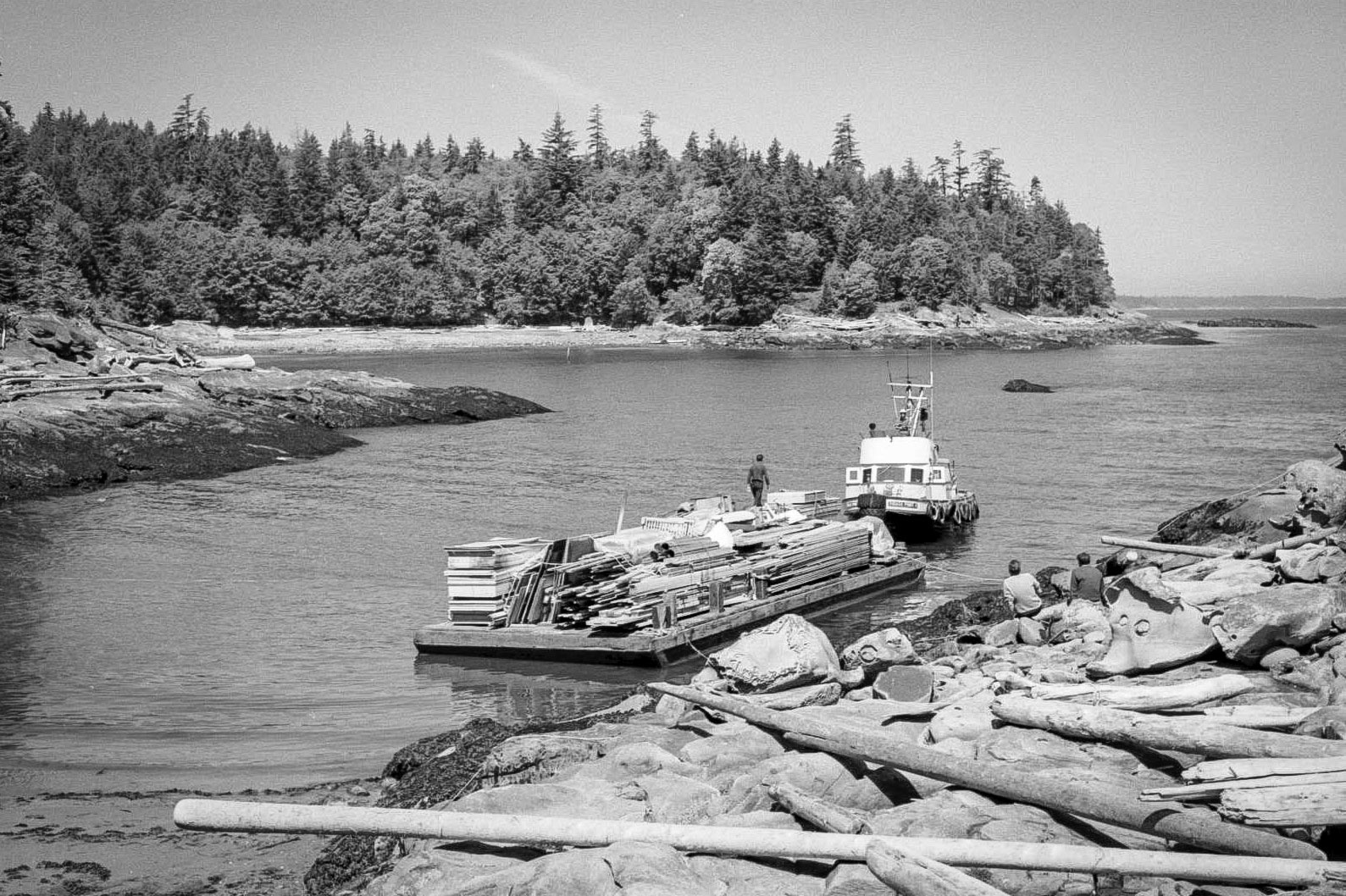 Here the tugboat is nudging the barge into the North bay on Detweiller point. That is Starvation Bay in the background. 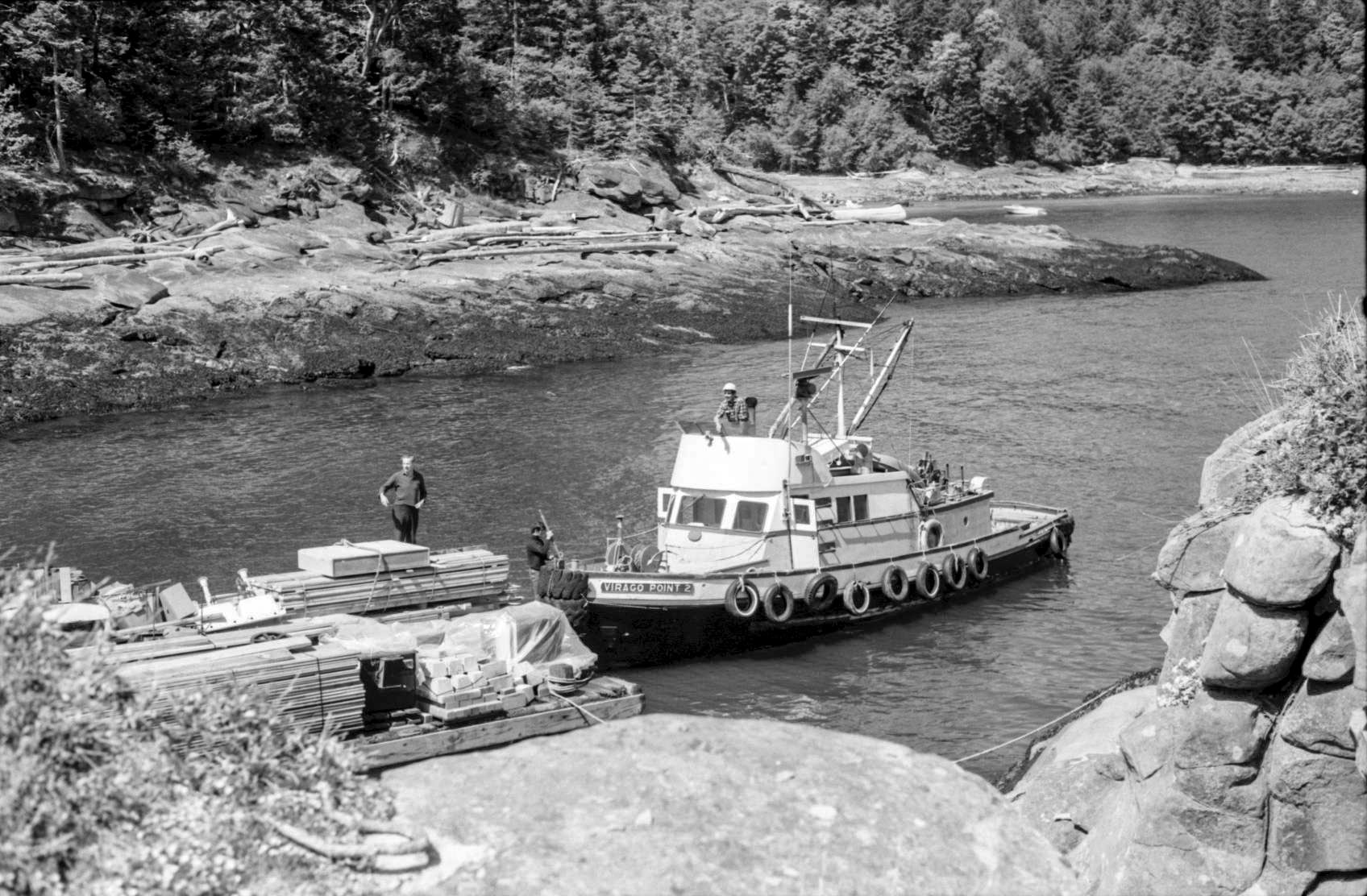 Material for two cabins were dropped in the North bay, one for Det’s cabin and one for a cabin across the bay from Det’s property. I think that was for his sister? 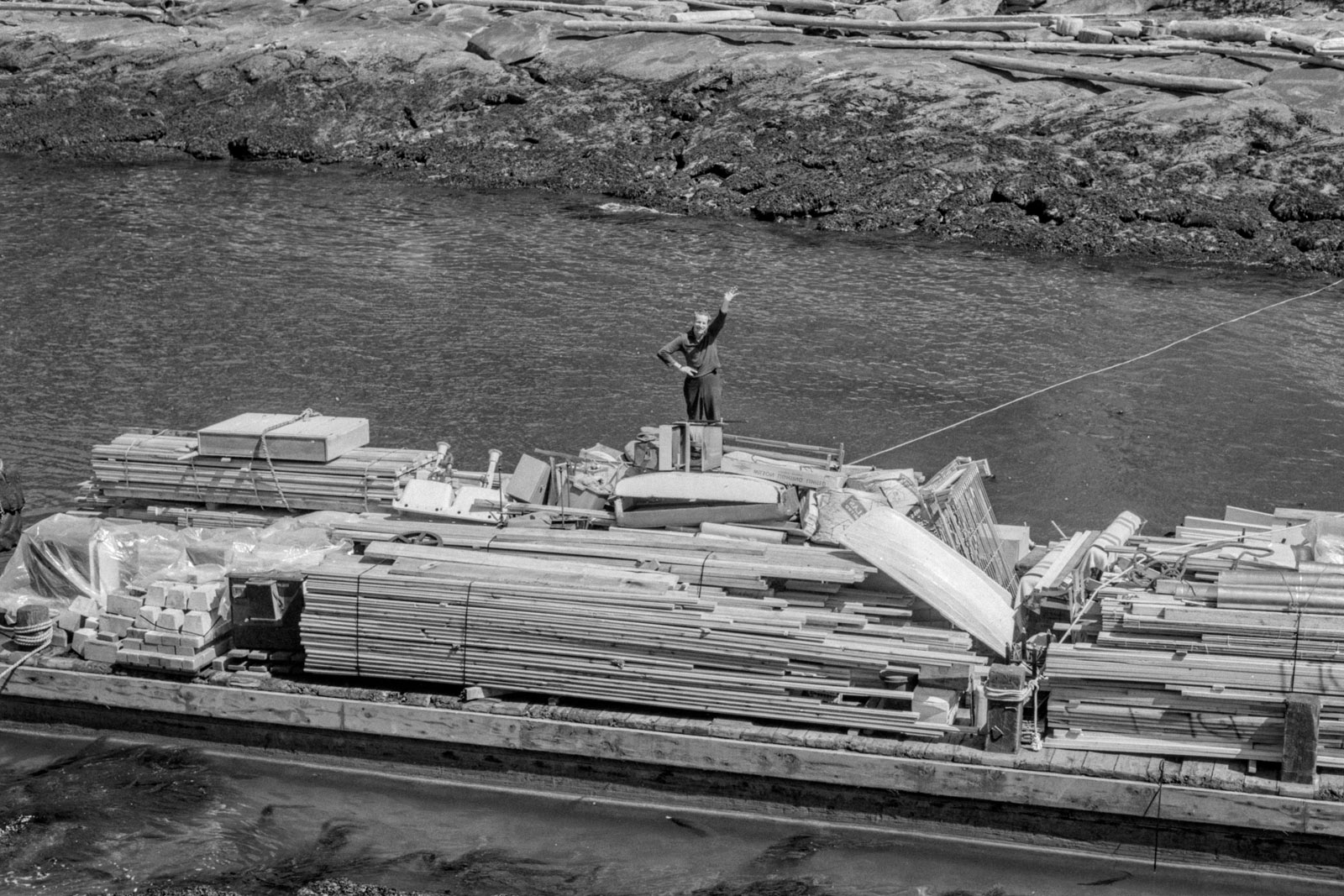 That is Det on the barge as they prepare to offload his cabin materials.

Unloading the barge in the North bay on Detweiller Point.

The barge put into the North bay on Detweiller Point first and we offloaded two cabins, one for Det and one for the lease across the bay. It sticks in my mind that was for his sister but I may be wrong. That took most of the day.

Then the barge was moved to the South bay and the materials for Det’s son’s cabin was off loaded. It was getting late so the tug left us for the night. In the morning the tub returned and we moved the barge to the bottom of our meadow where the materials for another cabin were delivered. I think that was for the Pederson’s cabin. And of course, we got our stove off the barge and carried up to our cabin.Finally the barge was moved again down to Oyster Bay where we offloaded Kirk Oviettes cabin. The building materials for his cabin lay for years just above the high water line in the trees slowly rotting away. I don’t think Kirk ever returned to the island. He certainly never built his cabin. 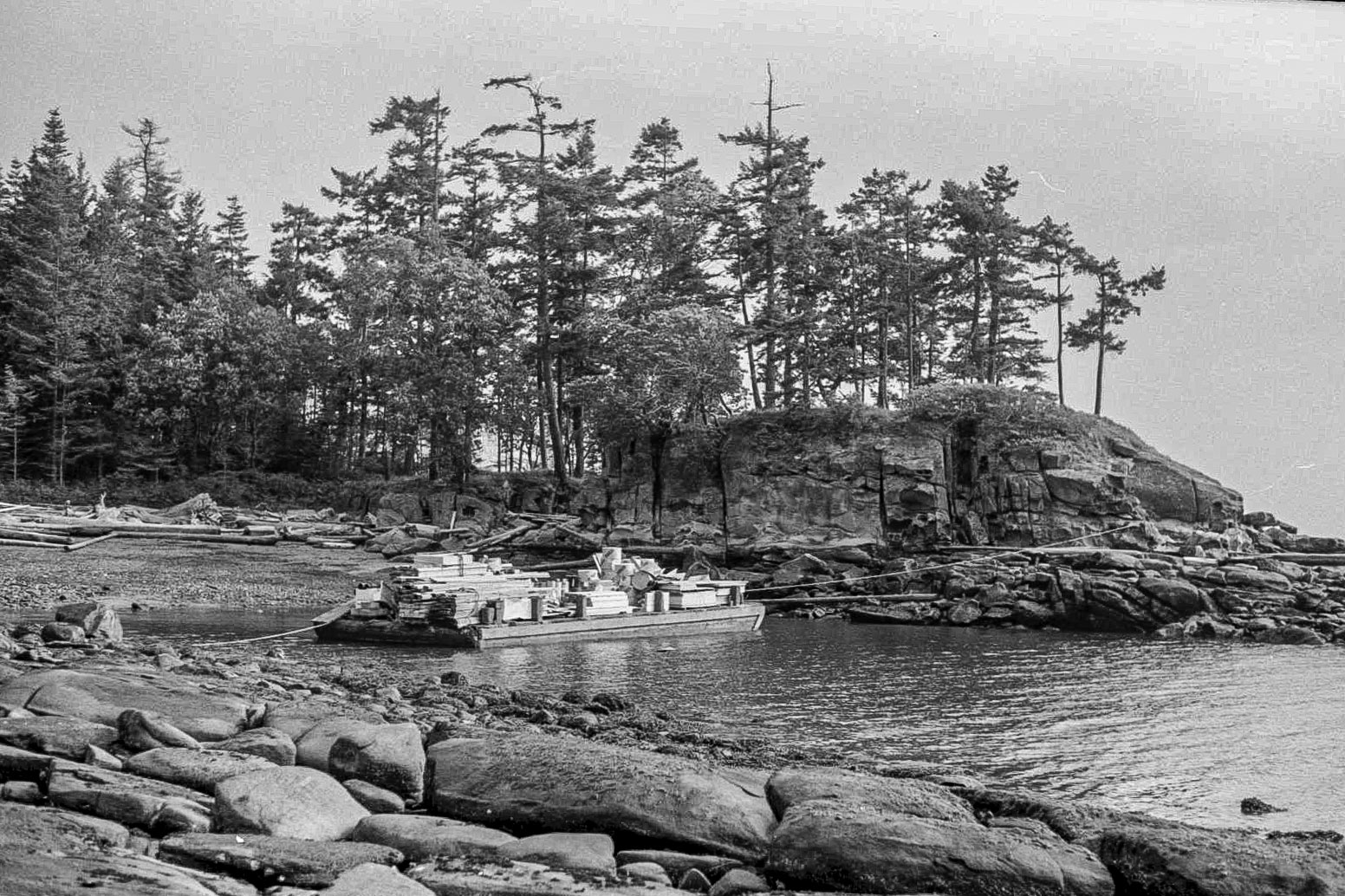 The barge in the South bay at Detweiller Point where it was left overnight for us to unload the third cabin.

As I recall, Leon Pedersen was a carpenter and when he built his cabin the workmanship was really excellent. I remember us marvelling at it. In this picture we have Leon and his wife Karen, I believe, and Dad is on the right end and Cliff Taylor on the left.

And that is how the first cabin came to be built. It was fifty years ago and my memory is failing. But that is the basic outline of the story. I don’t think Grandpa Bill had any idea the pleasure that cabin would bring to generations of Marr’s and Barchard’s. It was certainly our happy place.