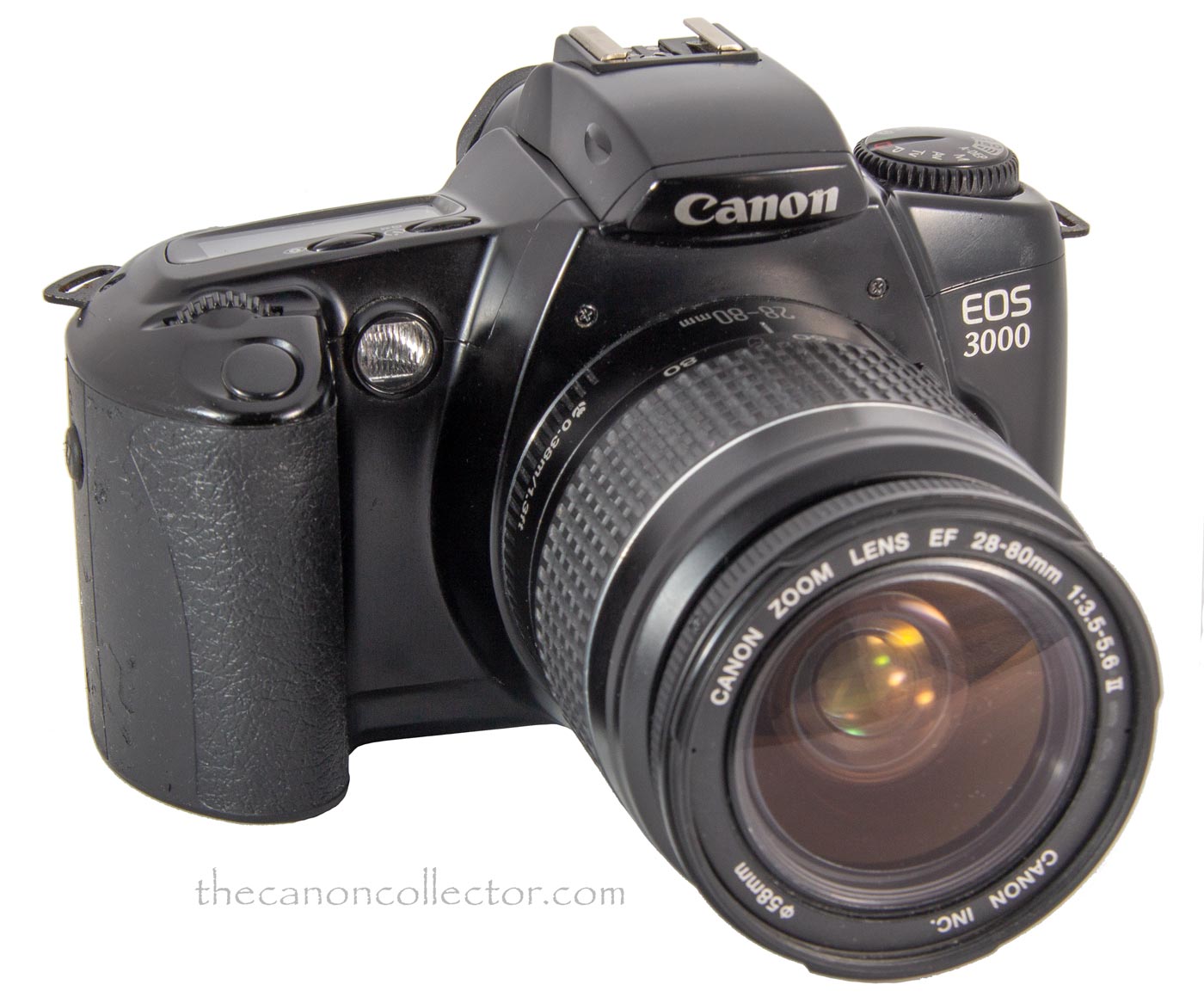 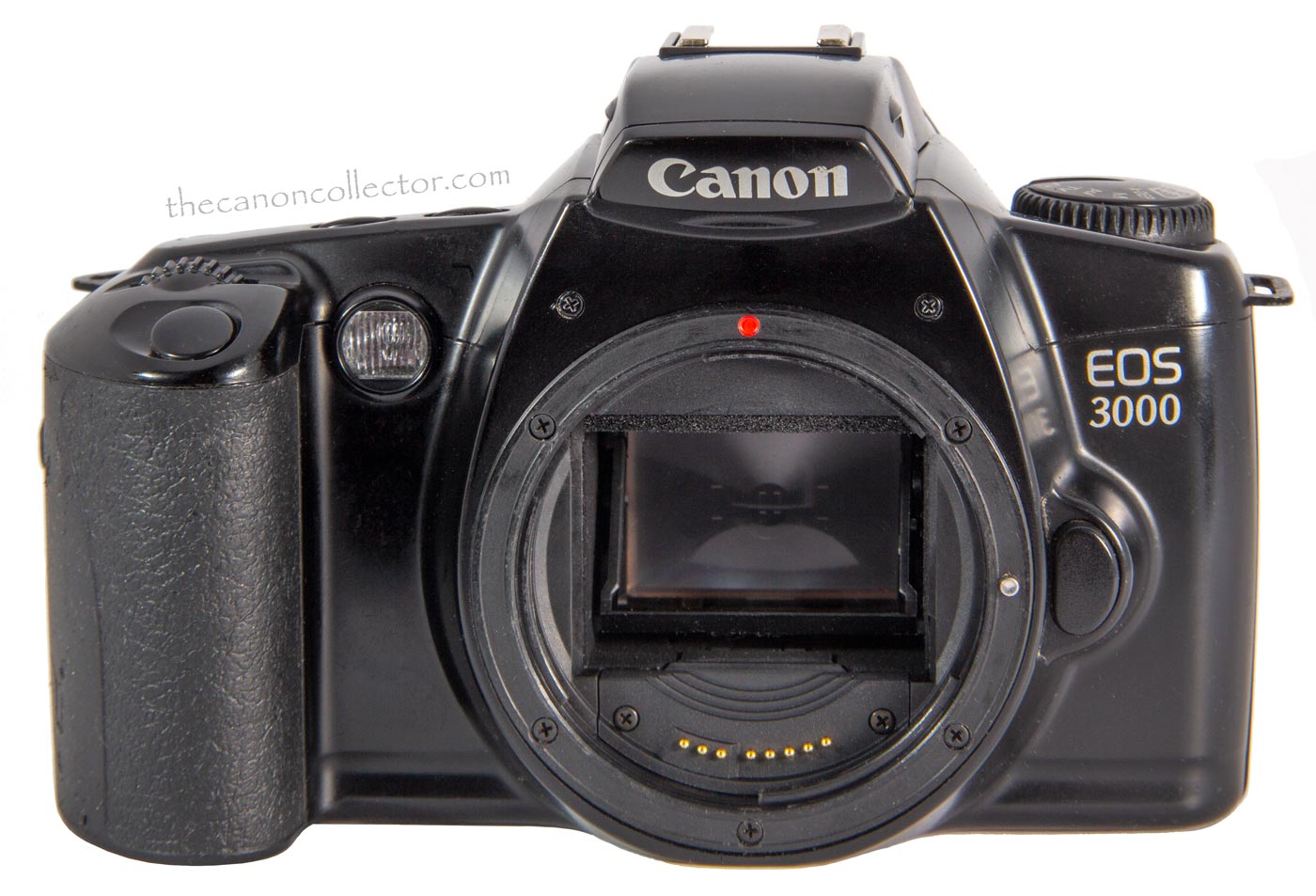 With the lens removed the plastic lens mount becomes obvious. But this is an EF mount and will accept all of Canon’s EF lenses which makes this a very capable camera.

We have been discussing “Entry Level” cameras and had a look at the EOS 5000 which was marketed in Asian. A few were sold in Europe as the EOS 888. This model was replaced in March of 1999 with the EOS 3000 which again was sold in Asian and a few in Europe as the 3000 or EOS 88. This time the new model was marketed in Japan as well as the EOS 3000. However, it was not made available in the American market.

This camera immediately impresses with its weight. It is a light camera thanks to the extensive use of plastics, even in the lens mount, and the lack of a pentaprism. Instead of a prism the camera has a mirror prism. This is essentially the same as the prism but the reflecting surfaces are mirrors. The resulting image is the same but dimmer. Internal glass reflections are much more efficient than mirror surface reflections resulting in brighter images in the prism. But mirror prisms are much lighter because the prism structure is hollow.

All of that said, this is still a capable camera and a considerable improvement on the EOS 5000. It has most of the features of the EOS Kiss, Rebel XS or EOS 500 cameras.

offering. The biggest improvement on this camera is the addition of a Mode Dial with which you can select Manual, Av, Tv, or Program mode or one of four fully automatic modes for Portrait shots, Night Scenes, Closeups and Landscape shots. All of these are familiar to modern camera users.

The shutter travelled vertically and was made of metal and capable of speeds from 30 seconds to 1/2000th of a second. X sync for the built in manual flash was 1/90th of a second.

The camera could read the film DX Code between ISO 25 and 5000 but if the cassette had no Code then film speed could be set manually between ISO 6 and 6400.

On loading the film, which was almost automatic, the film wound all the way out and then rewound frame by frame into the cassette as exposures were made. This was all was powered by two 3volt CR123A batteries. 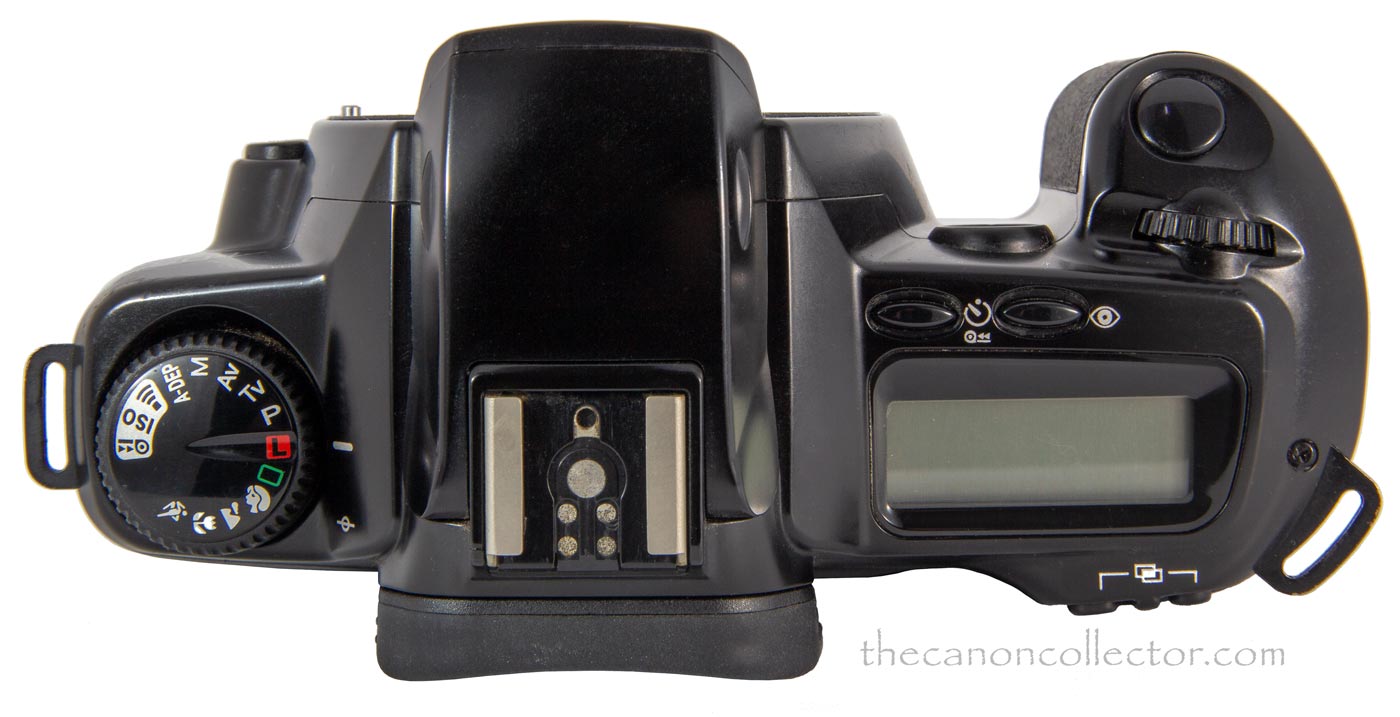 As we have said many times, this web site is not intended to instruct you how to use this, or any, camera.  That is all contained in the User Instructions which you will find here on the right. Do note that the Instructions point out that the 3000, called the 88 in Japan, both came with a non-interchangeable Data Back in a “QD” version. 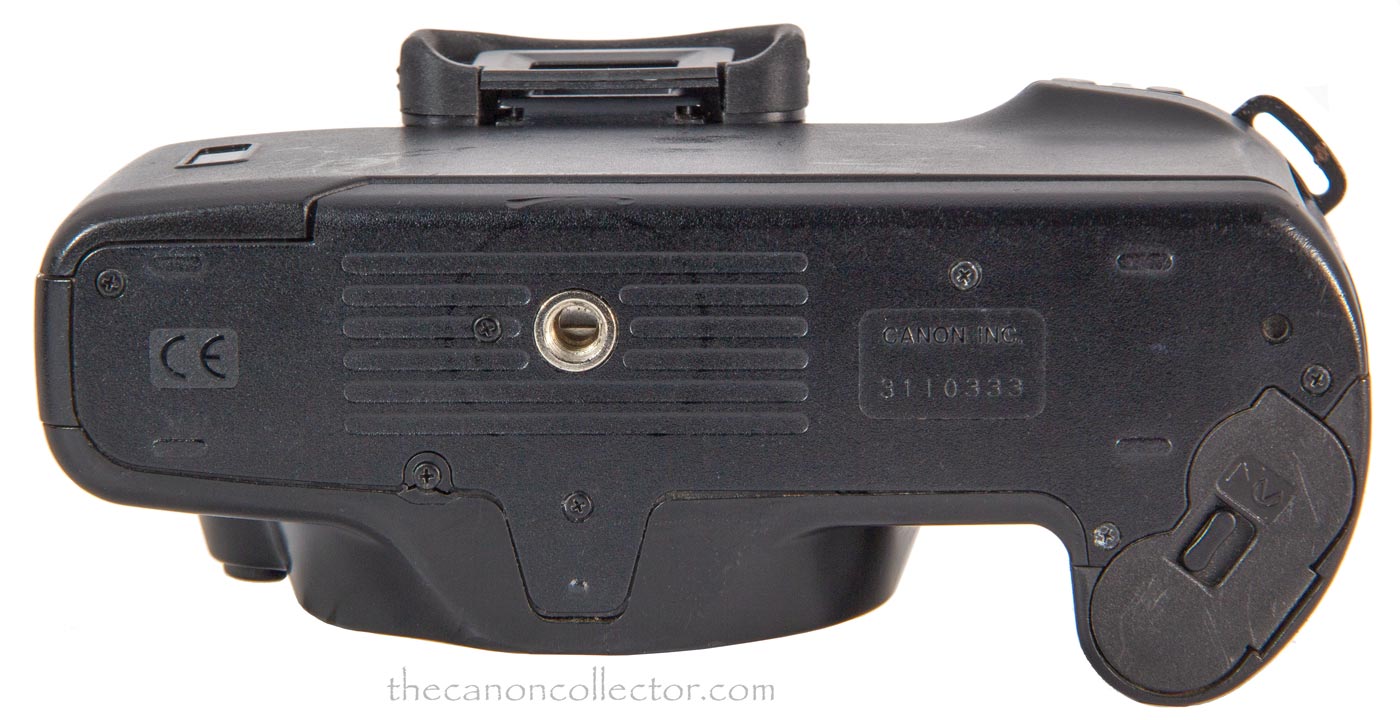 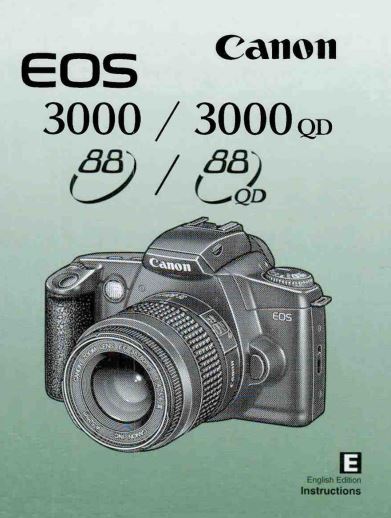 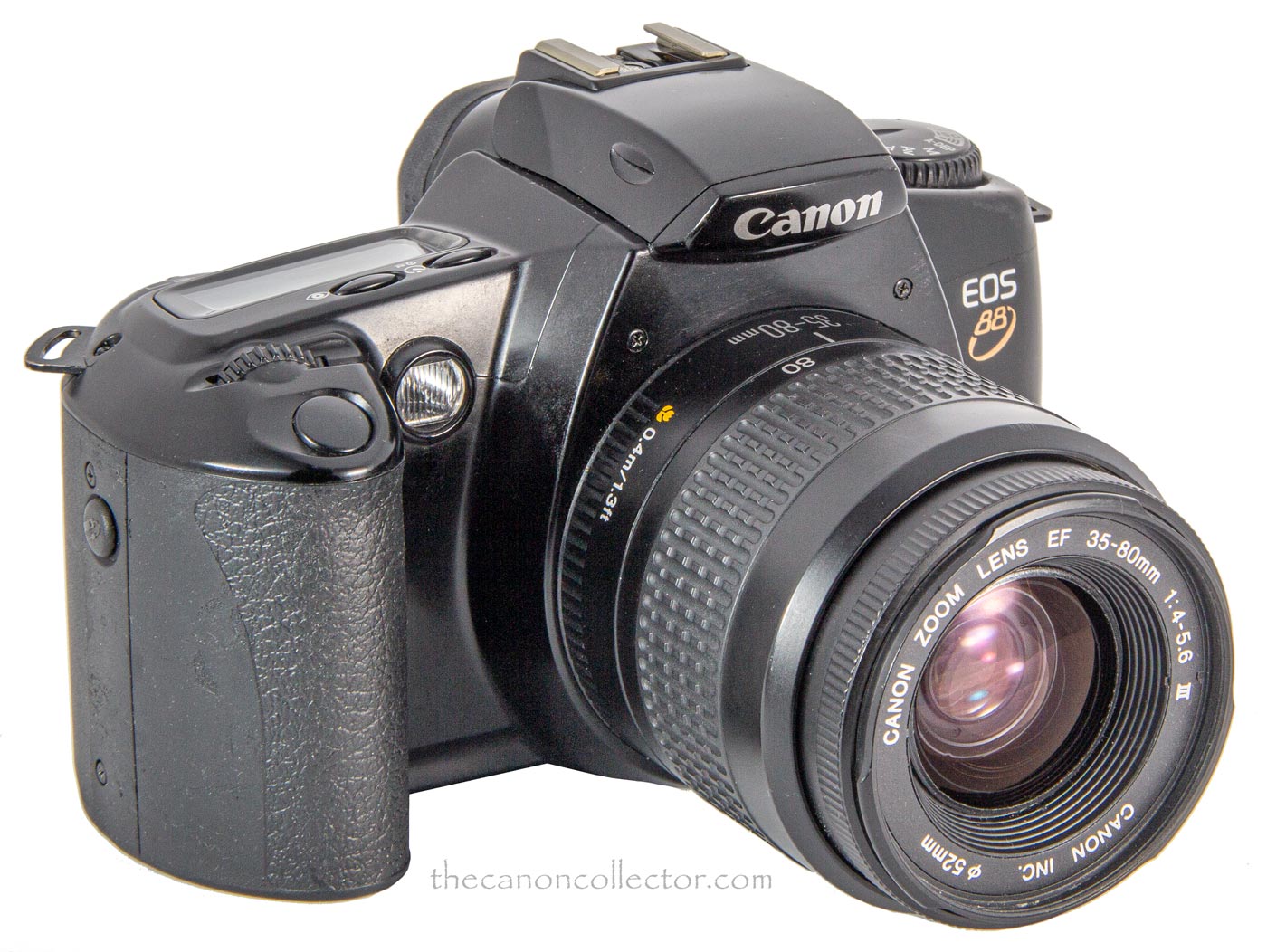 Both the EOS 3000 and EOS 88 were available in a “Quartz Date” version. The QD cameras had a Data Back that would imprint date or time on the film negative.  The term comes from the internal clock in the Back that was controlled by a quartz crystal oscillator. It is a term not used so much any more.

All models of this camera were actually wired for the Data Backs. It was a simple thing to include, basically a piece of wire and an electrical contact, so that any camera could be fitted with the Back. However, the Backs were not user changeable because it required a partial disassembly of the camera to do it. 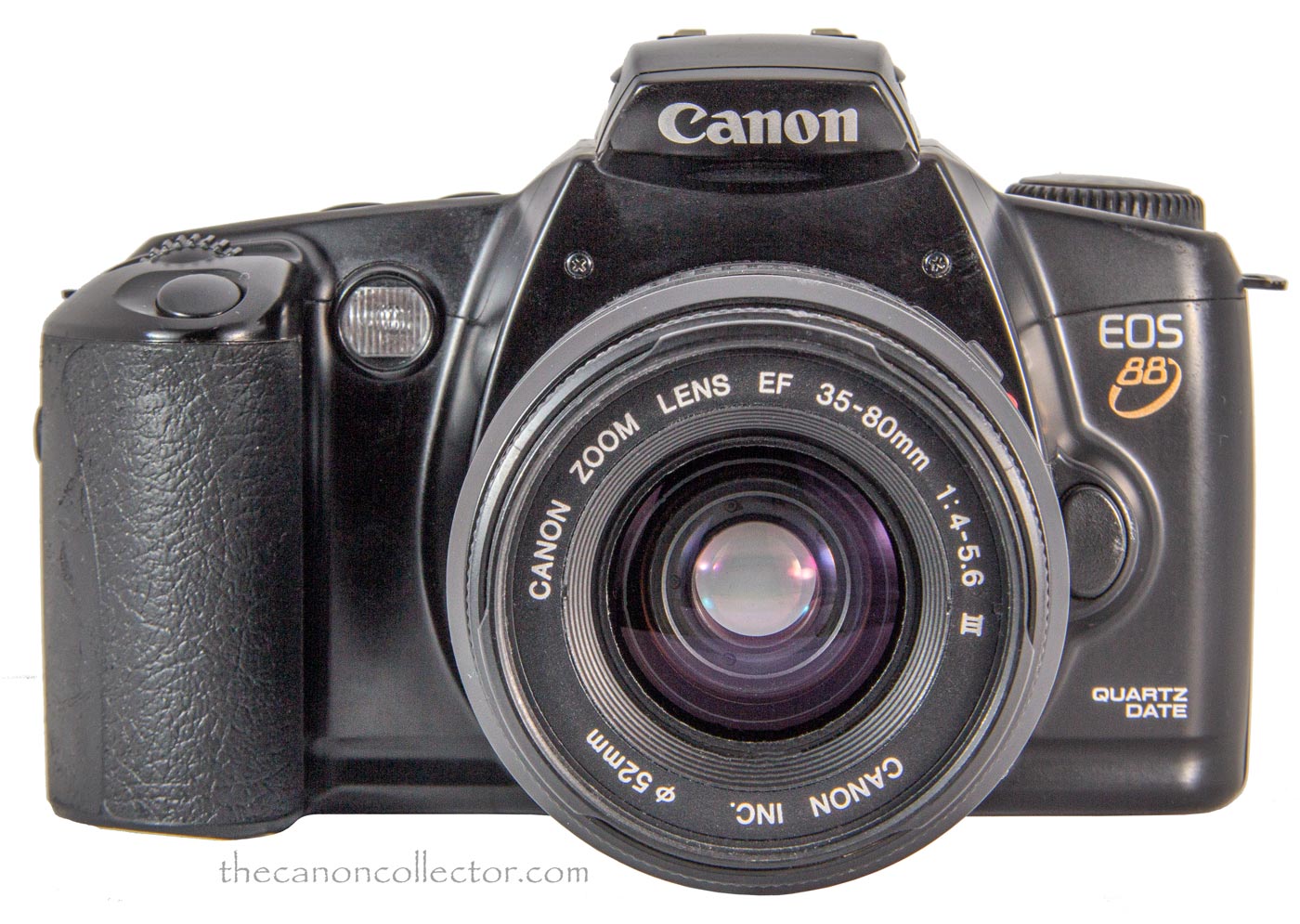 This is the same camera as shown just above. All QD models of this camera had “Quartz Date”  printed in the lower right corner (in this picture).

The Quartz Date Back was powered independently by a CR2025 coin style battery in a compartment on the back. The Back could be set to print nothing on the film but the clock continued to function and keep date and time current so long as the battery did not expire. It was normally good for several years in practice. 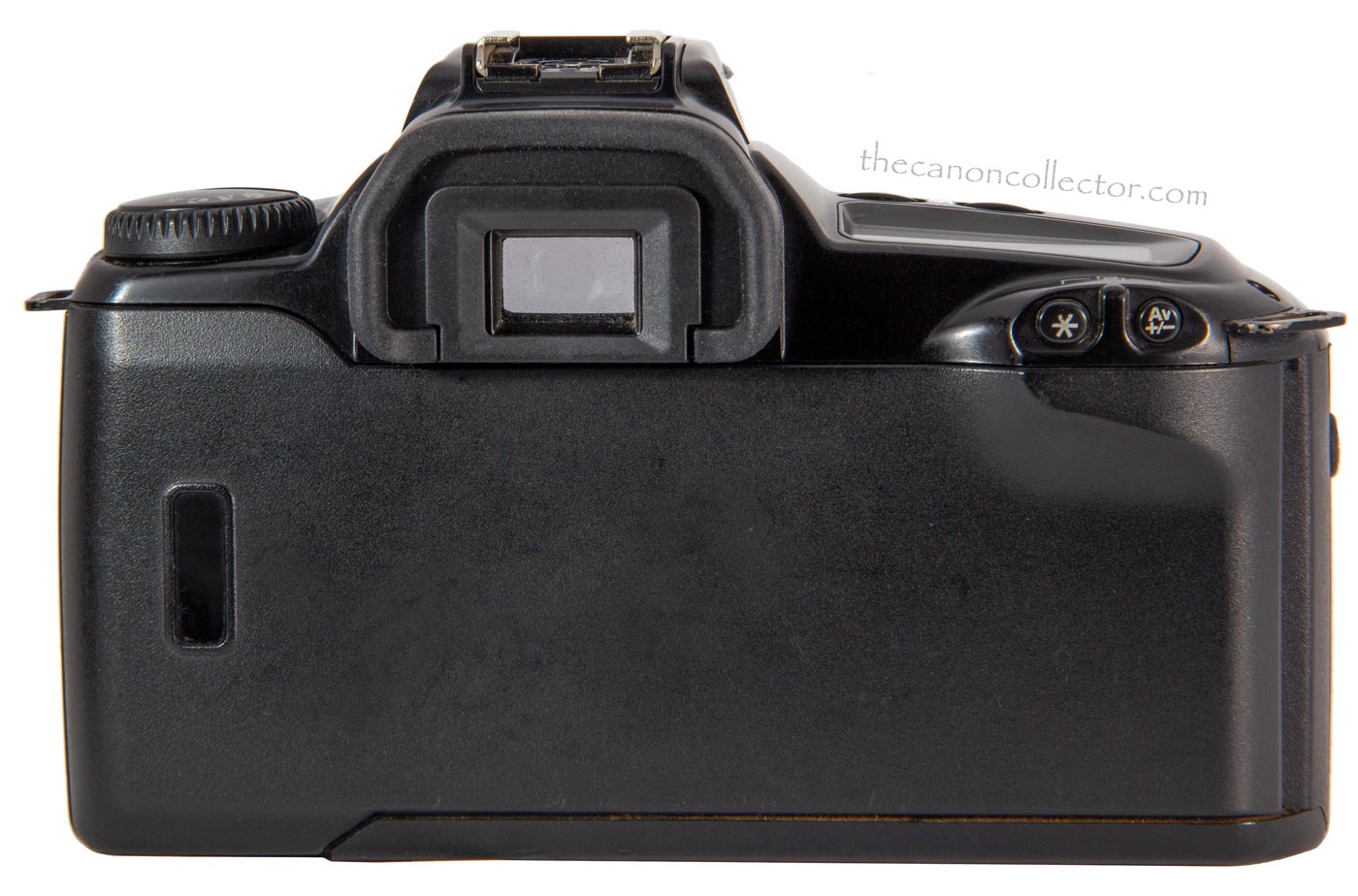 The back of the EOS 3000 non-QD version is plain with only the window for ascertaining if there is film in the camera. 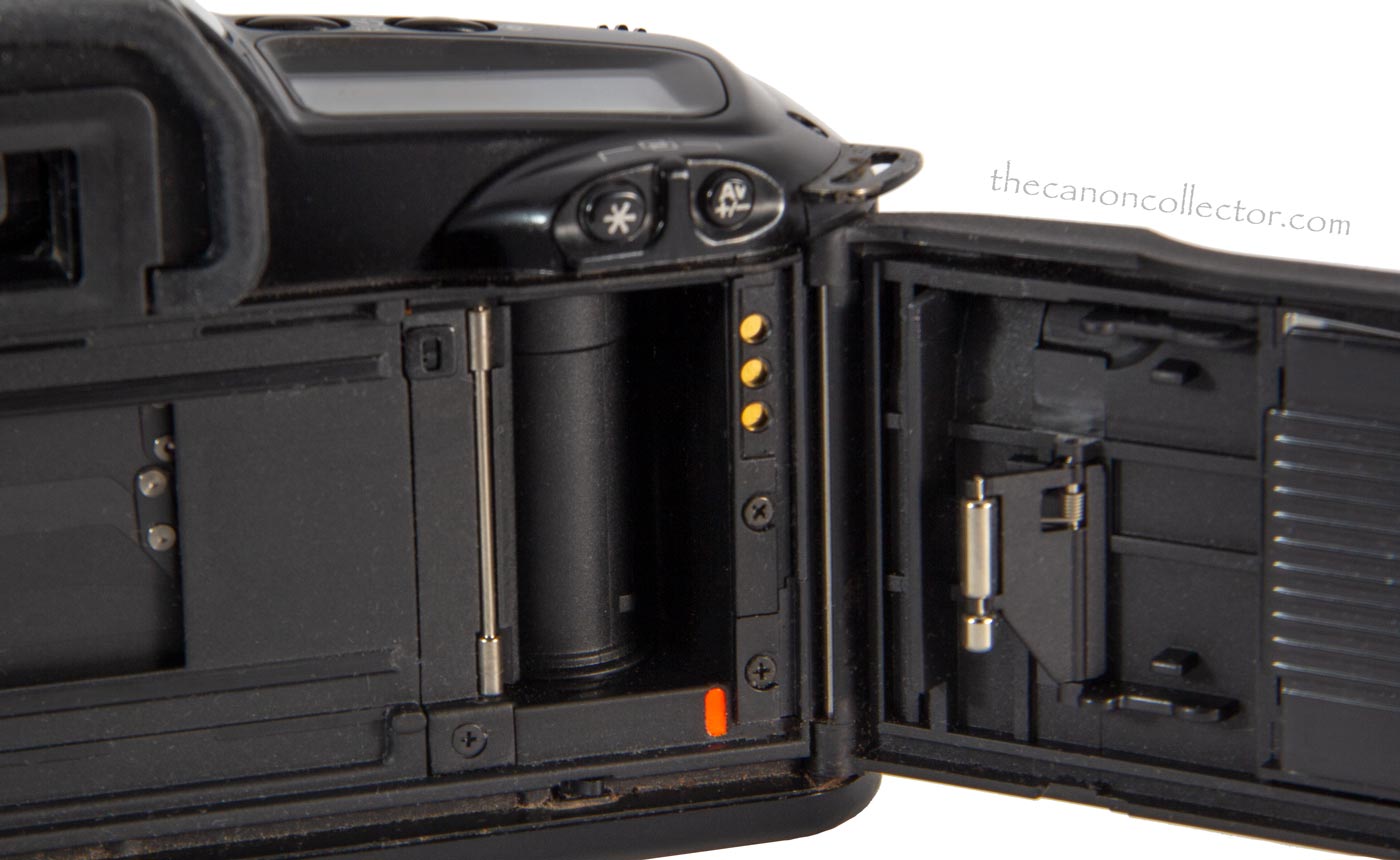 In the plain version of the EOS 3000 you can see that the hinge pin has no provision to retract it. Removing it requires the bottom to be removed from the camera. Also note the three round electrical contacts. The back has no matching contacts or cover for the CR2025 battery compartment. 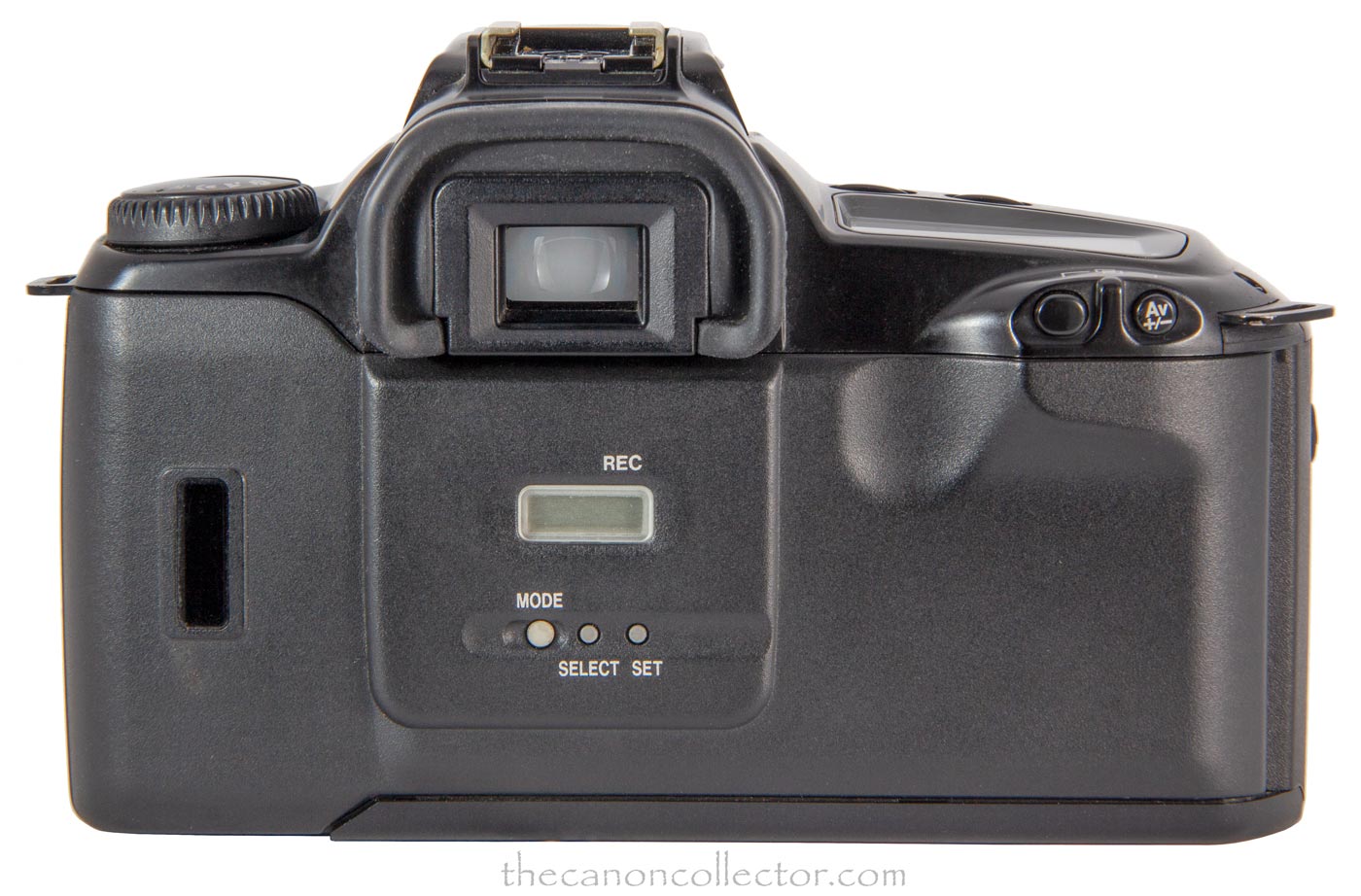 On the other hand, the back of the EOS 88 QD, and the 3000 QD, has a small LCD screen and buttons to control the imprinting of Date or Time on the film. 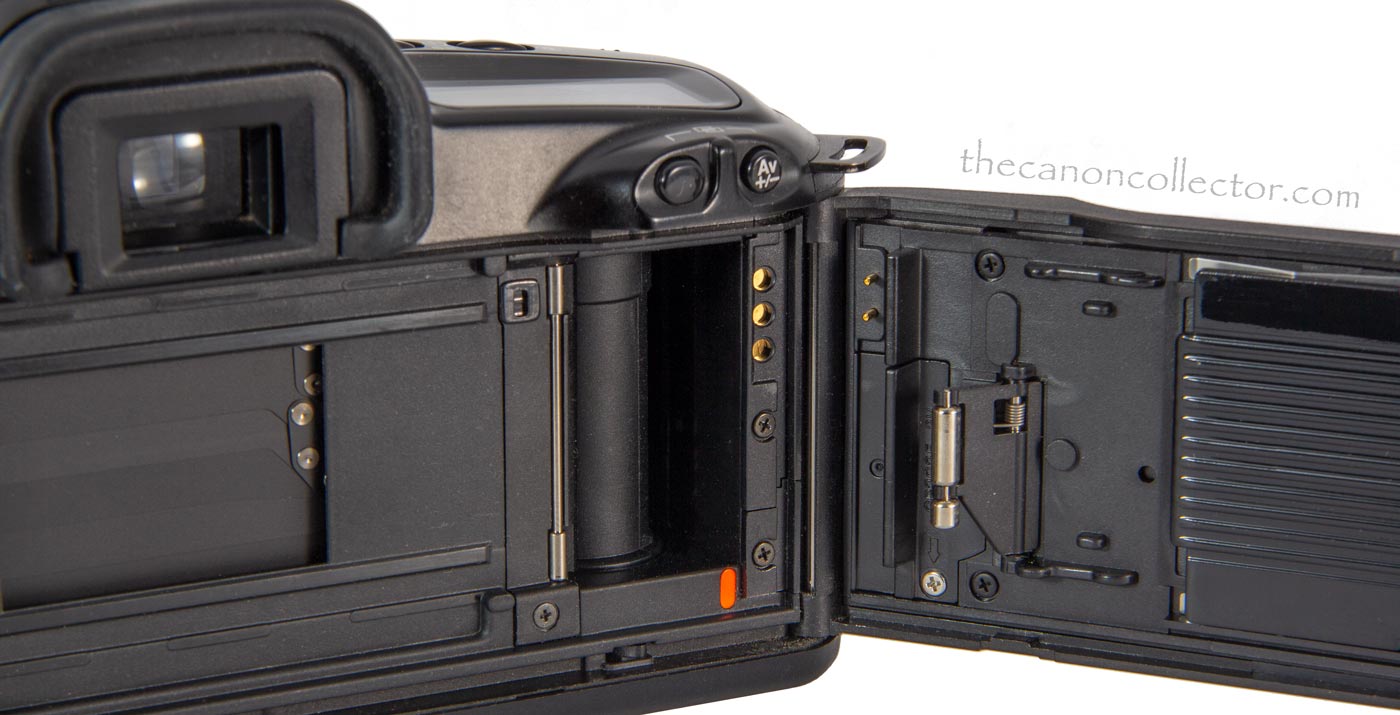 In the QD version there are two pins on the back that make contacts with the top two round electrical contacts on the body of the camera when the back is closed. The cover for the CR2025 battery compartment is visible at the bottom of the cover near the hinge pin.

And So …. in Summary

If you can get over how light and plastic this camera is, the is a great little film camera and a good shooter for anyone wanting to shoot some film. And the weight is a benefit if you want a travel camera. It is smallish and so light that you will not be aware of it around your neck. It can be used in Manual mode, Tv, Av or Automatic so there is nothing in your way of good pictures. And it can be used with any of Canon’s range of EOS lenses. That has to be a plus!