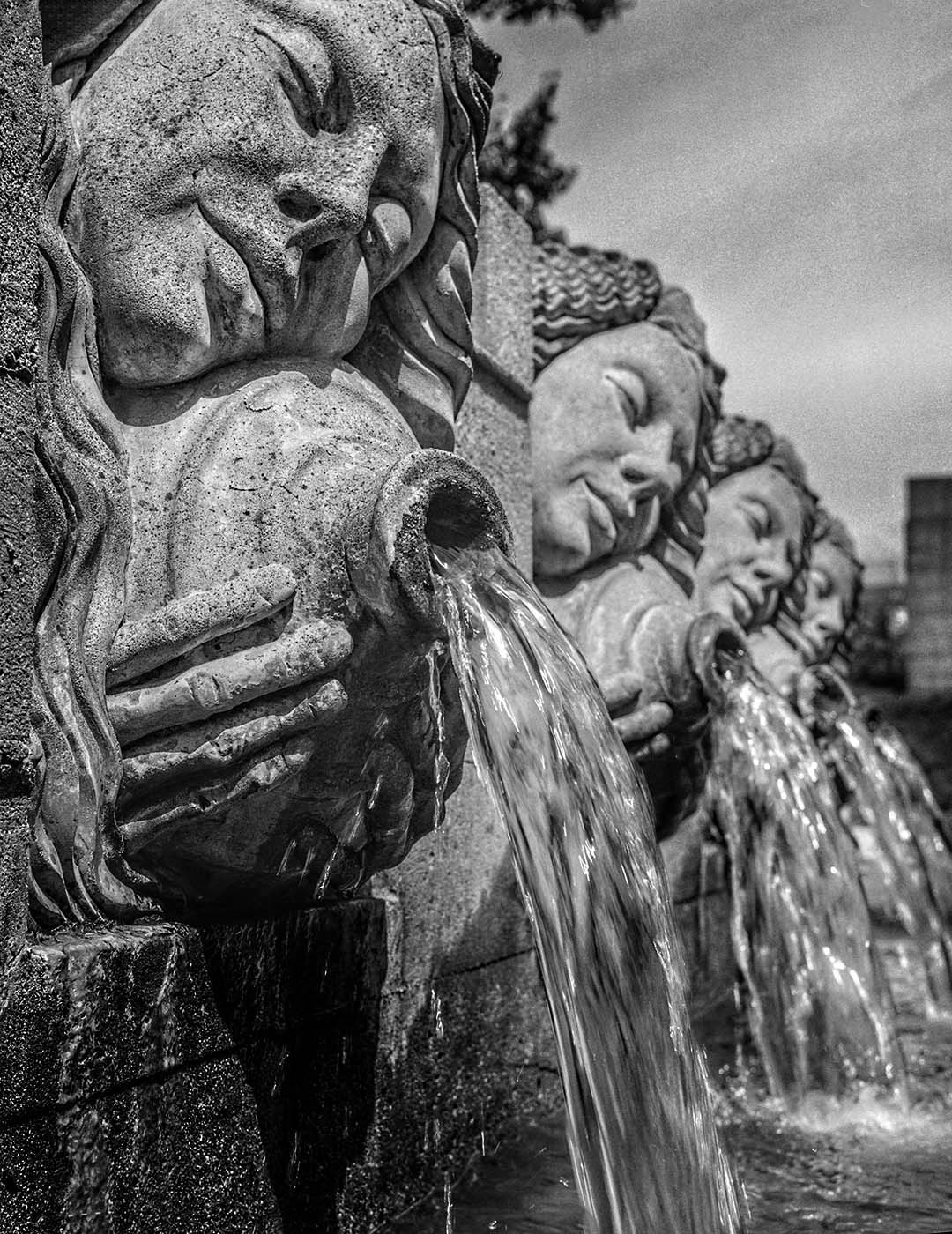 The “Four Maidens with Water Jugs” was my principal subject for the morning. This is a delightful fountain sculpture and I have never felt I had done it justice. I’m still not happy but this is better.

It is no secret that I like to take pictures. It is a strange thing but the whole process has always been satisfying for me: the fiddling with equipment, the capturing of an image, the preparation of the picture, all of it. I have found it so since my high school days which was 60 years ago. Two days ago my wife, Susan, was off to her morning at the gym and so I had a few beautiful hours ahead of me with no particular plans. It was one of these lovely mornings here in Vancouver. It was an early summer day, the air was cool, the sky blue, traces of cloud floating overhead. A perfect day to take some pictures!

I had two cameras with film in them that I wanted to use. The first was a new, new to me, Yashica D from the 1950’s loaded with 120 roll film and the second was my favorite 35mm F-1 which had a new lens on it I wanted to use: an FD 35-105mm f/3.5. So where to go. I thought through my options and settled on the Italian Gardens in Hastings Park. I have written about the Garden before in these pages. My wife and 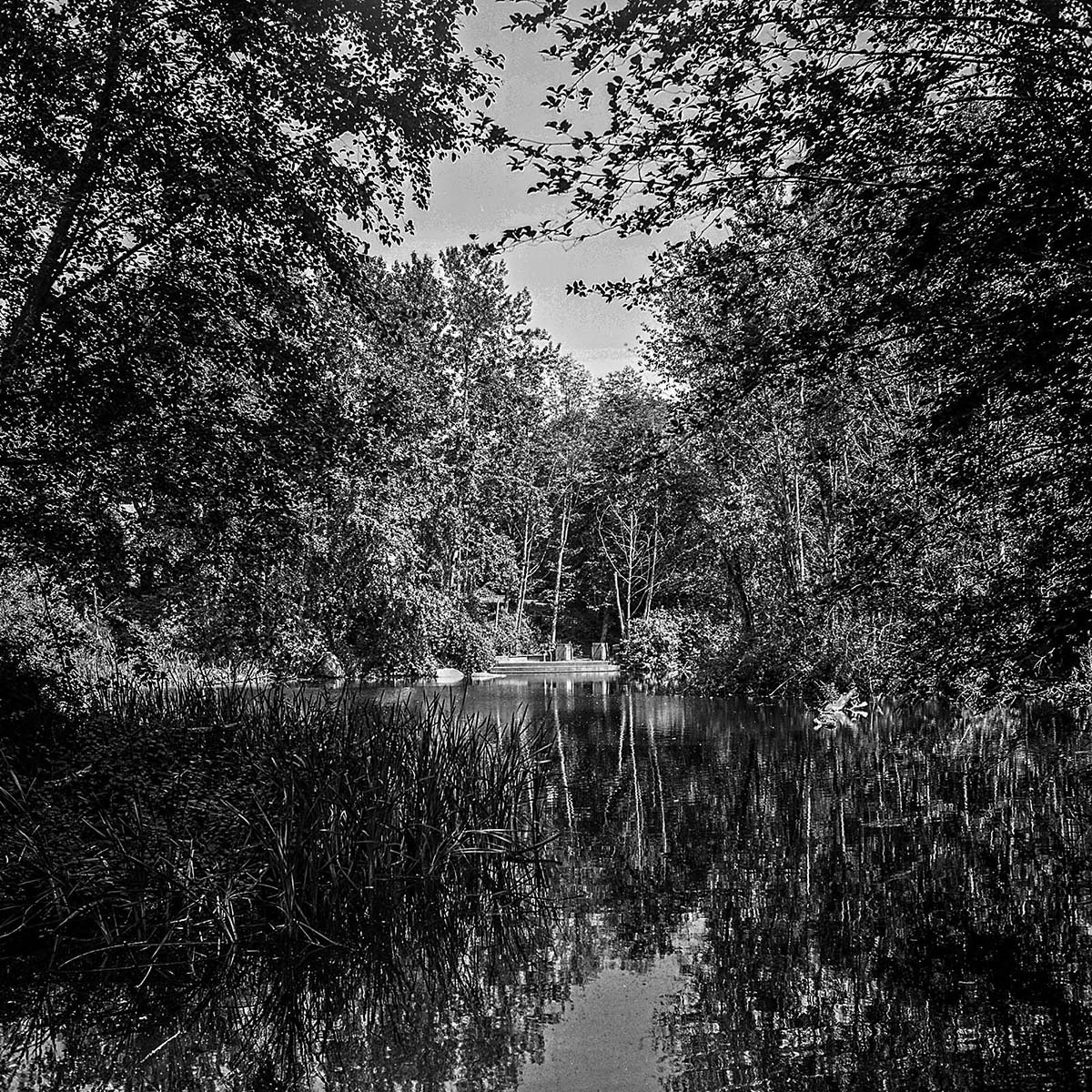 From where I parked I had to walk to the Italian Gardens and I chose to take the path past this beautiful natural lagoon called the Sanctuary. It is surrounded by forest paths and lookouts where one can watch the birds and fish.

I were early contributors to its creation and we were present on its opening day. We still walk there often.

In this garden there are interesting cement sculptures and I have never been satisfied with the pictures I have of them. Cement lends itself to black and white film, its surface has texture and depth and there is water which is always a wonderful subject for photography. So I had a project. I outfitted myself with a large camera bag, two cameras, monopod, light meter, hat for the sun and short pants with Hawaiian shirt. I must have been an interesting sight. I parked in the parking lot on the East edge of Hastings Park which is a fair distance from the Italian Gardens but the day was so beautiful and the walk was easy. I chose to go by the natural lagoon in the park, called the Sanctuary, which is a lovely forest trail through native West Coast vegetation. And I began taking pictures along the way. All of the images in this post were taken on that morning. 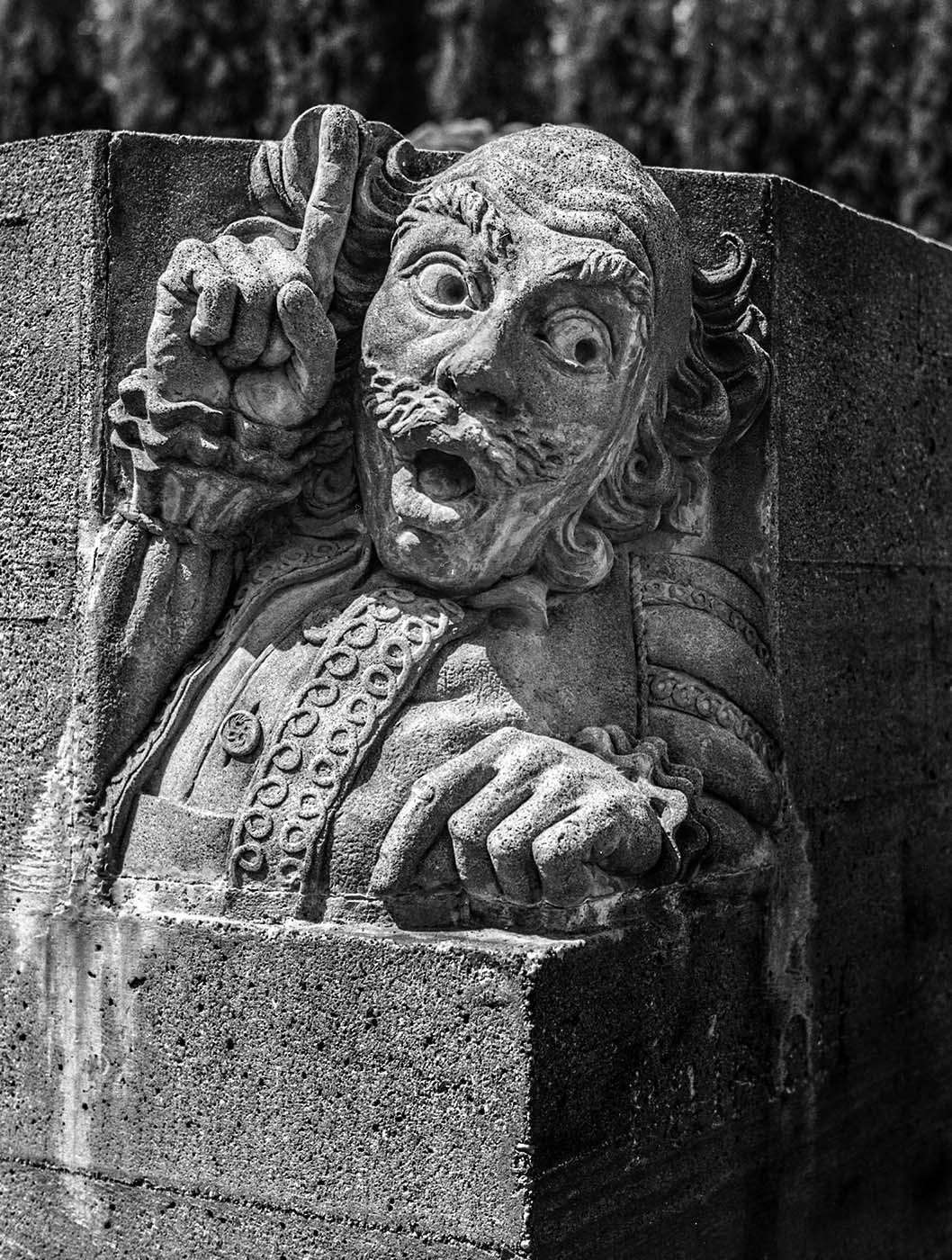 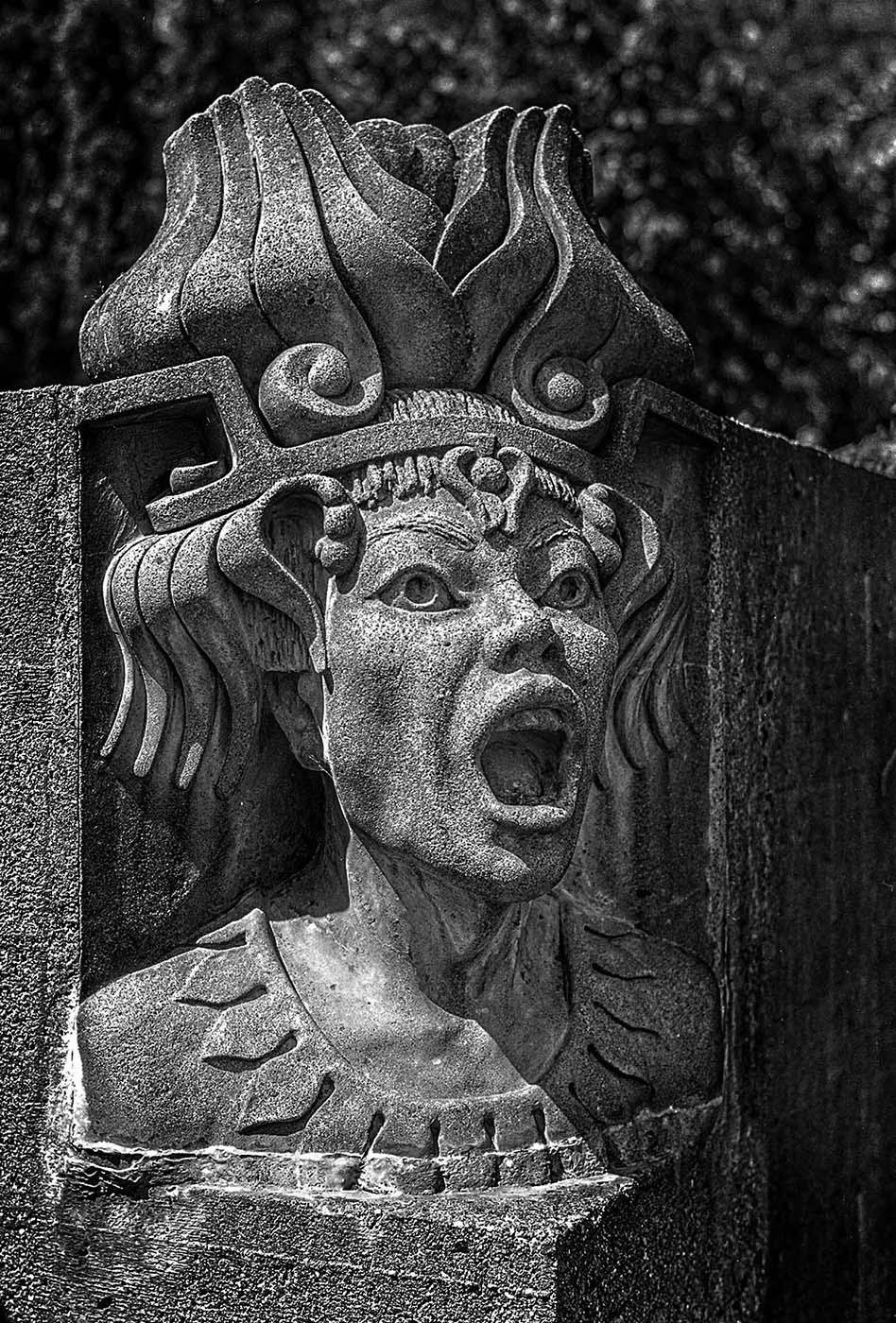 When I arrived in the Gardens I went immediately to a sculpture of four maidens with water jugs. I had identified this sculpture as my main focus for this outing as I felt my earlier pictures of it did not do it justice. Nearby were a group of small children, 5 to 6 years old, from a daycare or kindergarten. They were having a wonderful time, playing on the grass and splashing in the water. It was a great place for them.

On the opposite side of the fountain area, about 30 feet away, is a concrete wall and walkway which is called the Opera Walk. In the wall are several sculptures, in cement, of various figures from Italian opera. I set up my equipment here and began taking pictures of them. My back was to the children and my camera was clearly pointing in the opposite direction.

I had taken one or two pictures when the second adult with the children approached me again asking that I not take pictures “with the children present”. At this point I realized that they did not want me taking any pictures while they were there. Now that was foolish. I had my back to them and was obviously paying no attention to them and my camera was pointed away from them and plainly so.

I explained to the woman that I was not photographing the children, that I had no interest in them, and that I would continue as I was doing. I pointed out that we were in a public place and I had a right to photograph anything and anyone I wished and that there is no right of privacy in a public place.

She wanted to see my pictures and I explained I was shooting film and that was not possible. She then raised her cell phone and took my picture. That was interesting. She was exercising a right she wished to deny me. That annoyed me and I turned away and back to my pictures. I heard her say to her associate that I would not stop and that she had my picture

I wish this was the end of the story but it is not. I finished taking my pictures of the opera characters and when I turned, the children and their adults were gone. I did not hear or see them go as I was absorbed in my own activity. I went over to the sculptures on the fountain and took my pictures there at which point I ran out of film. I packed up my gear and began the walk back to my car. I had to walk a fair distance, about a quarter of a kilometer, and when I got to my car I put my gear away. As I was doing this a Parks vehicle drove past and the driver, in a friendly manner, comment on my car and we got into a conversation about cars. We spoke for about 10 minutes. I finally said I had to go and he drove away about fifty yards and stopped. I could hear him on the radio but I assumed it was parks’ business and I thought nothing of it.

I drove home, parked in the alley, because I was planning to wash our driveway, and went into the yard. Almost immediately I noticed two young men in jeans and T-shirts looking at my car and then coming to my back gate, which was closed and locked. They called to me and I walked up to them. They asked where I had been. I was uneasy about this and demanded to know who they were and why they were asking. They said they were Vancouver City Police and when I asked for identification, they were not in uniform, they produced their badges and pointed out their police car which I had not noticed parked in the alley. At this point I also noticed they were carrying sidearms. 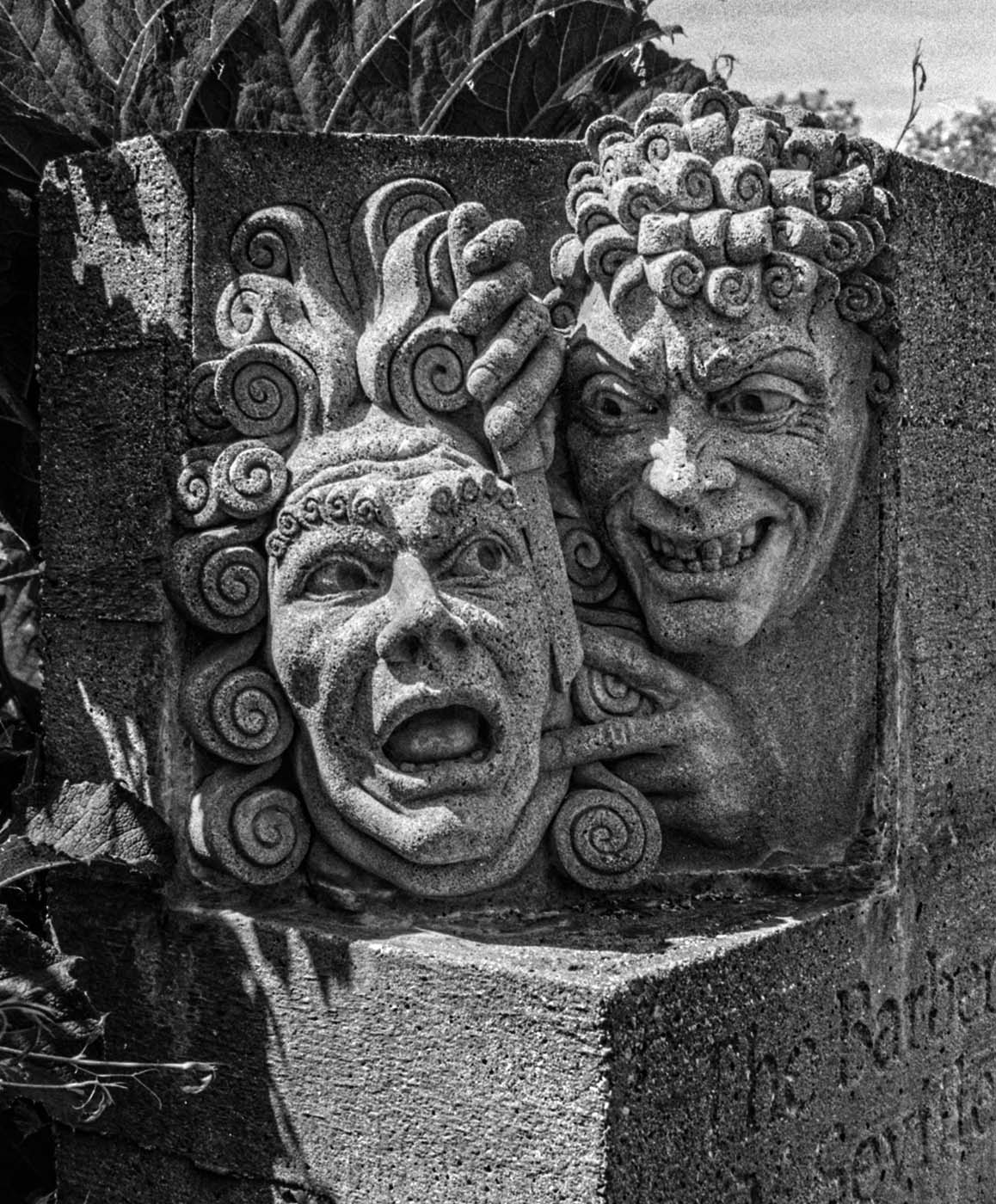 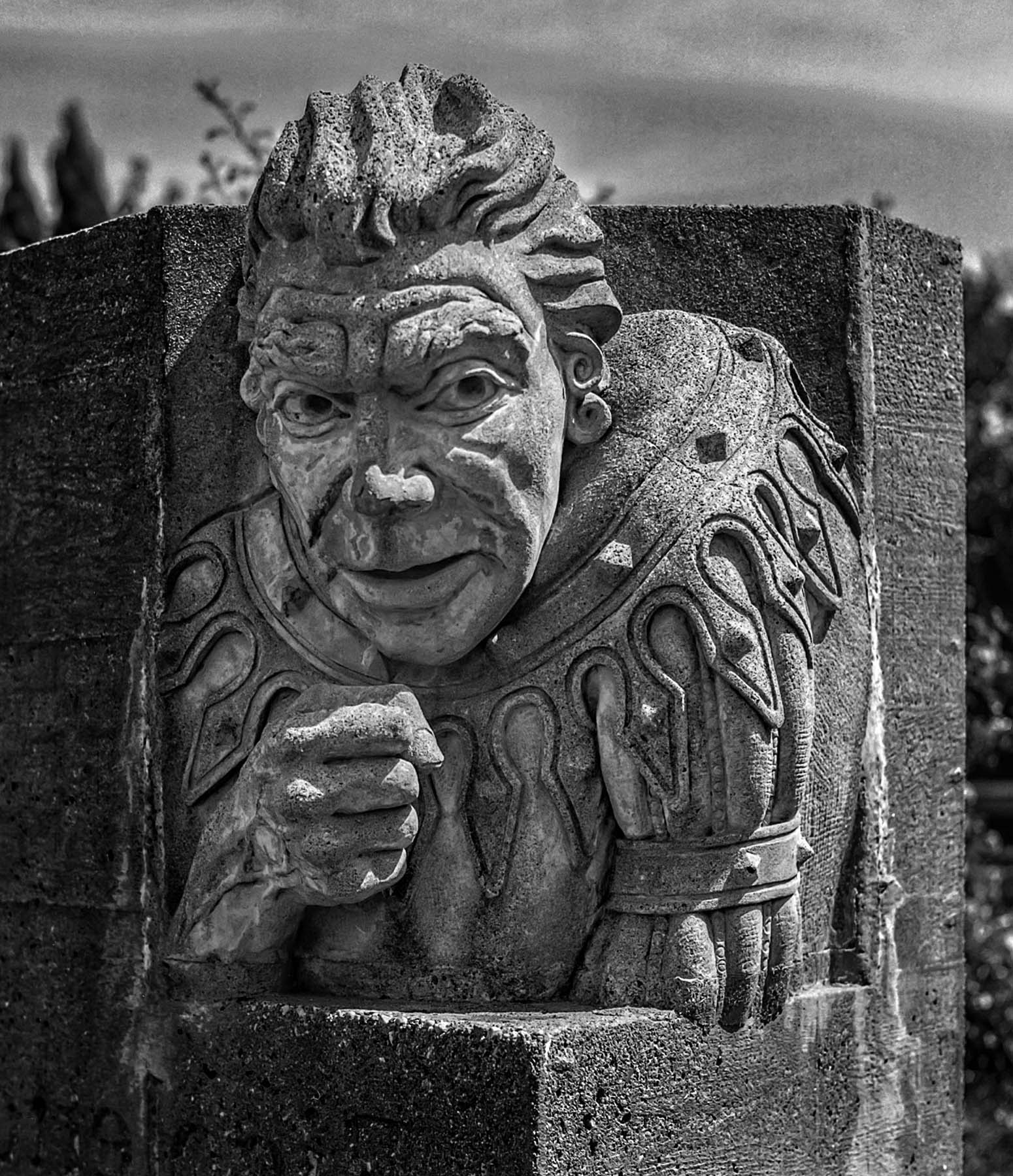 I invited them in and we spoke for several minutes about what had happened in the park. Obviously they had been given my licence plate number which must have come from the park employee. They said they were satisfied and apologized for what must have been a misunderstanding and they left. But I was not happy.

Now, let me say that the police were very polite and to the point. I have no complaint with the way they treated me and it is reassuring that a complaint can be dealt with so quickly.

That said, the story is still not over. My neighbor next door came to the back gate a few minutes later asking what was going on. He had been in the park at the end of the alley and been approached by police there and questioned. My home is on a cul-de-sac and can be accessed from the street or from the alley. There had been a police car at both accesses, one in the alley, which I saw, and one at the entrance to the cul-de-sac. And my neighbors were being questioned. So it was now a public matter. I felt my privacy had been seriously violated.

When the police left they said that was the end of it. But was it? There is now a complaint on file that I am a suspected pedophile, my name and address are connected to the complaint as well as my licence plate number and driver’s licence number. And what recourse do I have? When my name is called up by the next policeman to stop me what will he see there? Will he assume he is dealing with a pedophile?.

Now, about the women who filled the complaint, what am I to think. There was no threat to them or their charges, actual or perceived. I was not watching the children or taking their pictures. I was not lurking about. I was approached by them as soon as I arrived. I had no time for lurking!

They had no reason to suspect me of anything. I was minding my own business in a public place pursuing an innocent hobby. And I was the only person who had their picture taken that morning.

But the long and the short of it is that you cannot demand privacy in a public place. You cannot take control of a public park and dictate what others are allowed or not allowed to do. And you do not make baseless allegations of pedophilia against innocent people. You can do real harm. It was reckless and uncivil.

And what about what the children saw. They saw adults in conflict, they sensed concern, they certainly perceived the old man with the camera as a threat. I am not sure children should be taught that their elders are a threat. Teach them to be careful but don’t teach them to fear the elderly. These women certainly did not benefit their little ones by their conduct.

I complied with the request not to take pictures in the direction of the children. I turned away. And after the second approach I turned away again and, for me, that was the end of the matter. But not for them. They involved the police and made allegations against an old man about inappropriate behavior around children.

What about the future? I ran out of film before I was finished taking pictures. Do I go back and risk another confrontation? Do I watch out for children and stay away from them? I love children. I am a grandfather many times over and a great grandfather. I find joy in young voices. Avoiding children is not acceptable to me.

But I do know this: in the future, should something like this come up, I will be more vocal and more assertive of my rights to be in a public place and to take pictures. This is not Russia and I refuse to be worried about whether I can take my camera out. I was bullied and I resent it and I will not let it happen again. I was too willing to accommodate and walk away. In the end, it did no good. It would have been better to have had the police attend in the park with all present. Next time I will insist on it.

Oh, and by the way, I think I got some excellent pictures that morning in spite of the distraction.