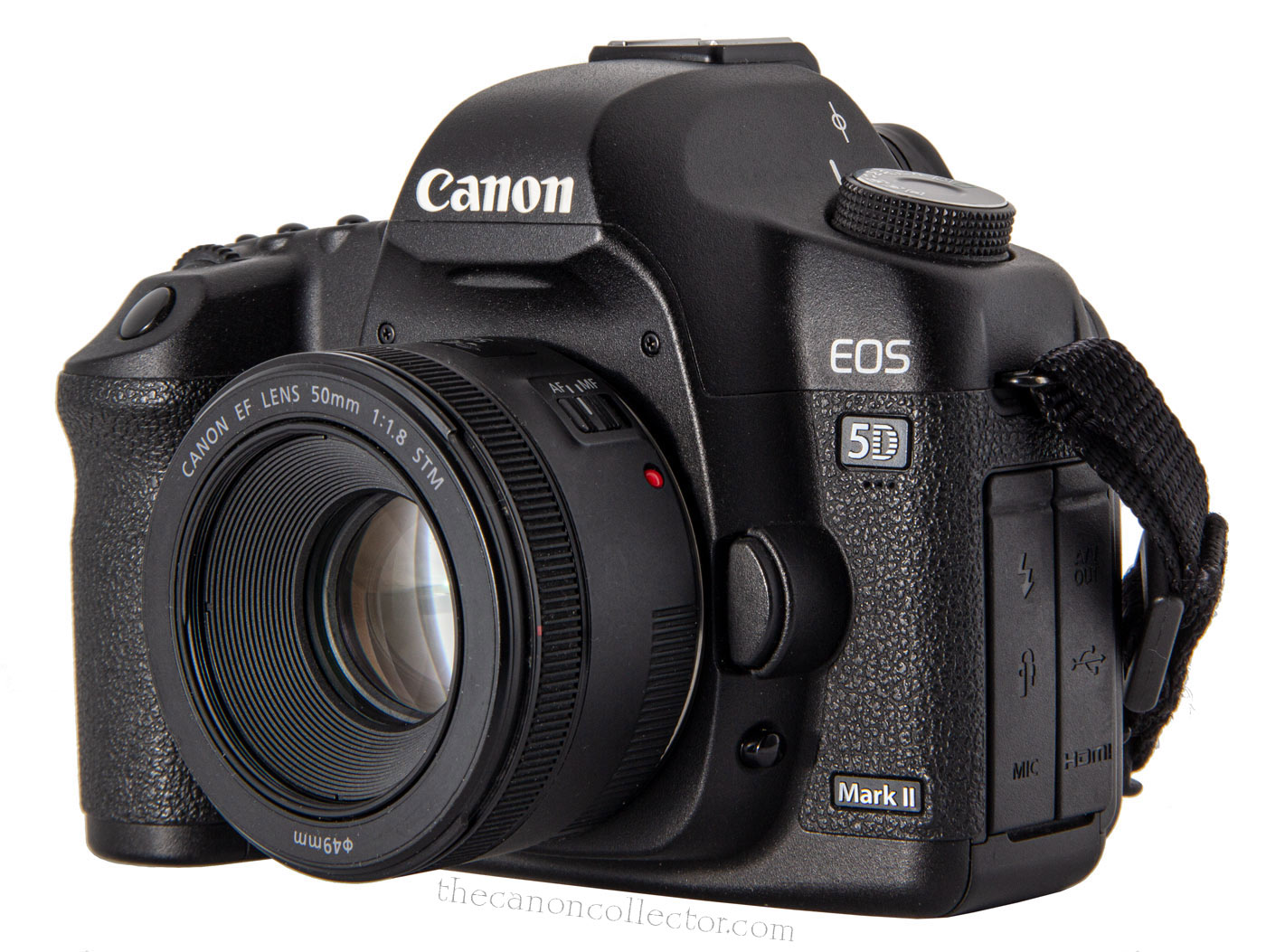 My EF 50mm f/1.8 STM lens mounted on my 5D Mark II. The immediate attraction to this lens is its light weight and small size. But just how good is it?

How Nifty is this Fifty?

I spend a great deal of time with my various old lenses and have
developed a pretty good idea
of their capabilities.  But I have
not really done this with my
current EF lenses that I rely on
day in and day out.

I was recently disappointed with
one of these lenses, I won’t say which one till I have looked at it further, when I got home from a day of shooting. The images were not of the quality I expected. But it was my fault for not investigating what I should expect from each of my lenses.

To correct this oversight I set out to examine my “go to” lenses to better understand them. The first one my hand fell on was the EF 50mm f/1.8 STM. This lens is currently (10 March 2020) still available new from Henrys.com for 169.99 CDN. This makes it one of the most inexpensive lenses marketed by Canon, ever. And it turned out to be hugely popular.

This is an attractive lens for more reasons that price. The build is mainly plastic but it feels solid. The lens mount is metal and the size, small, makes it an appealing lens to carry about. 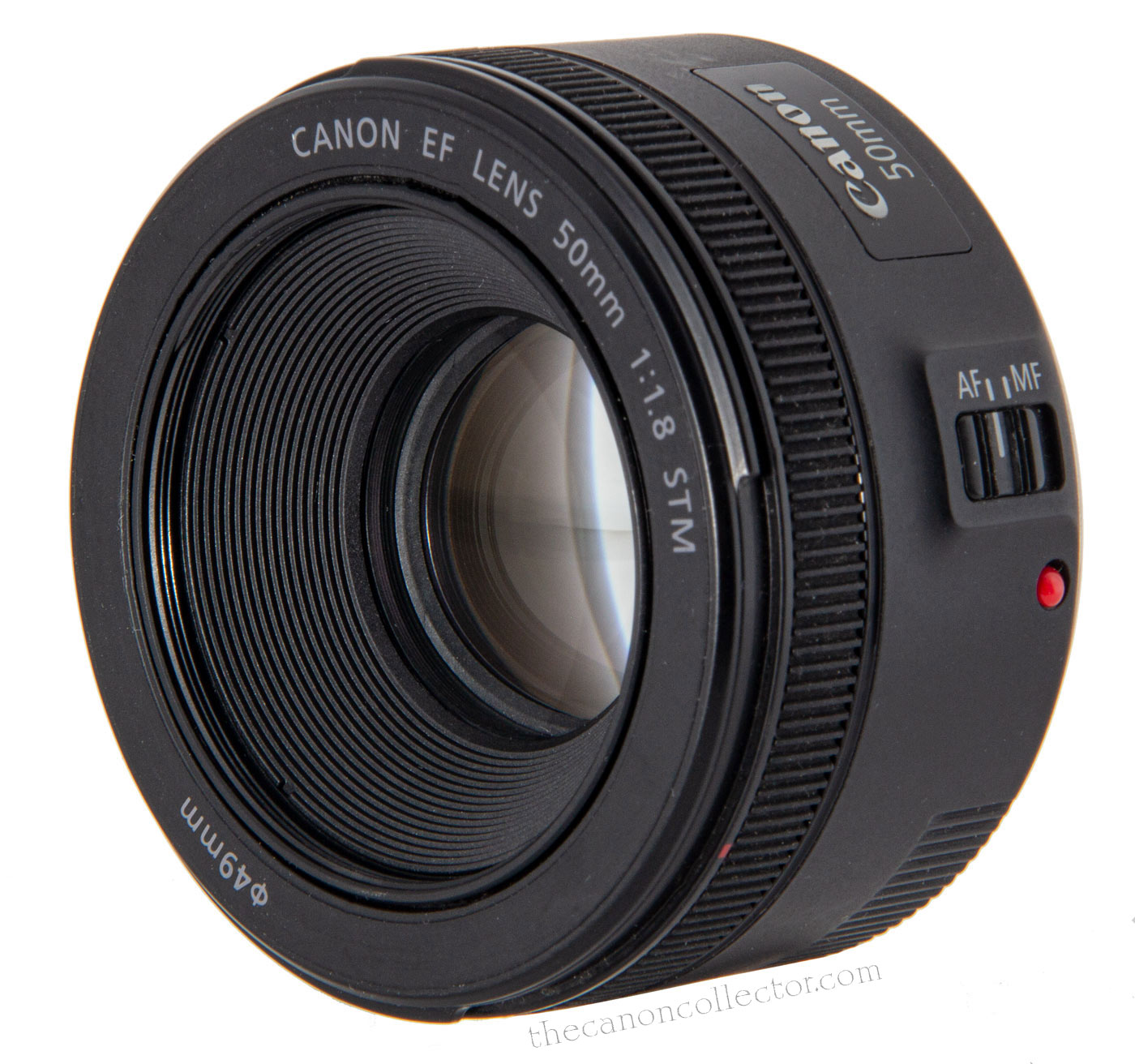 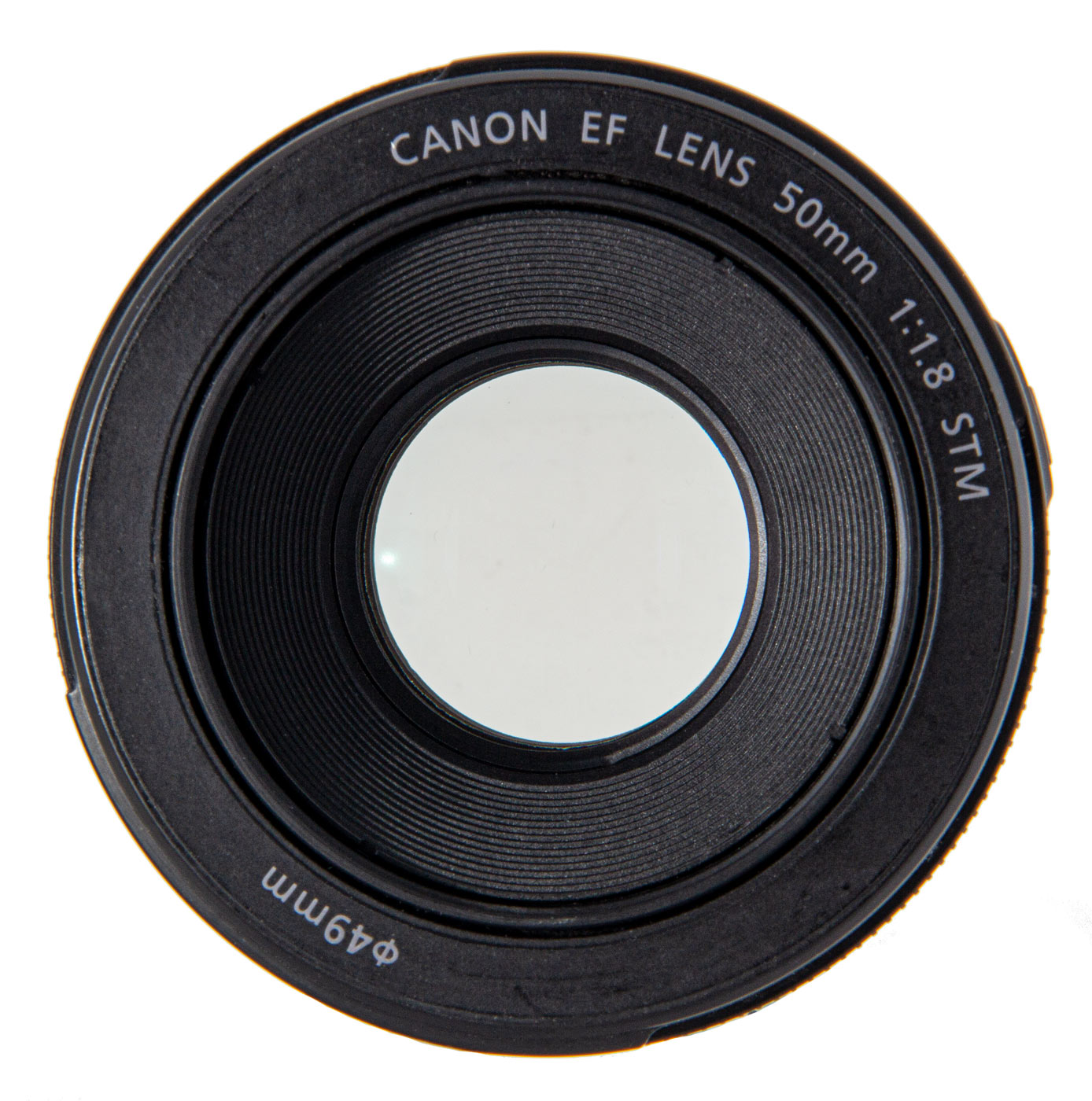 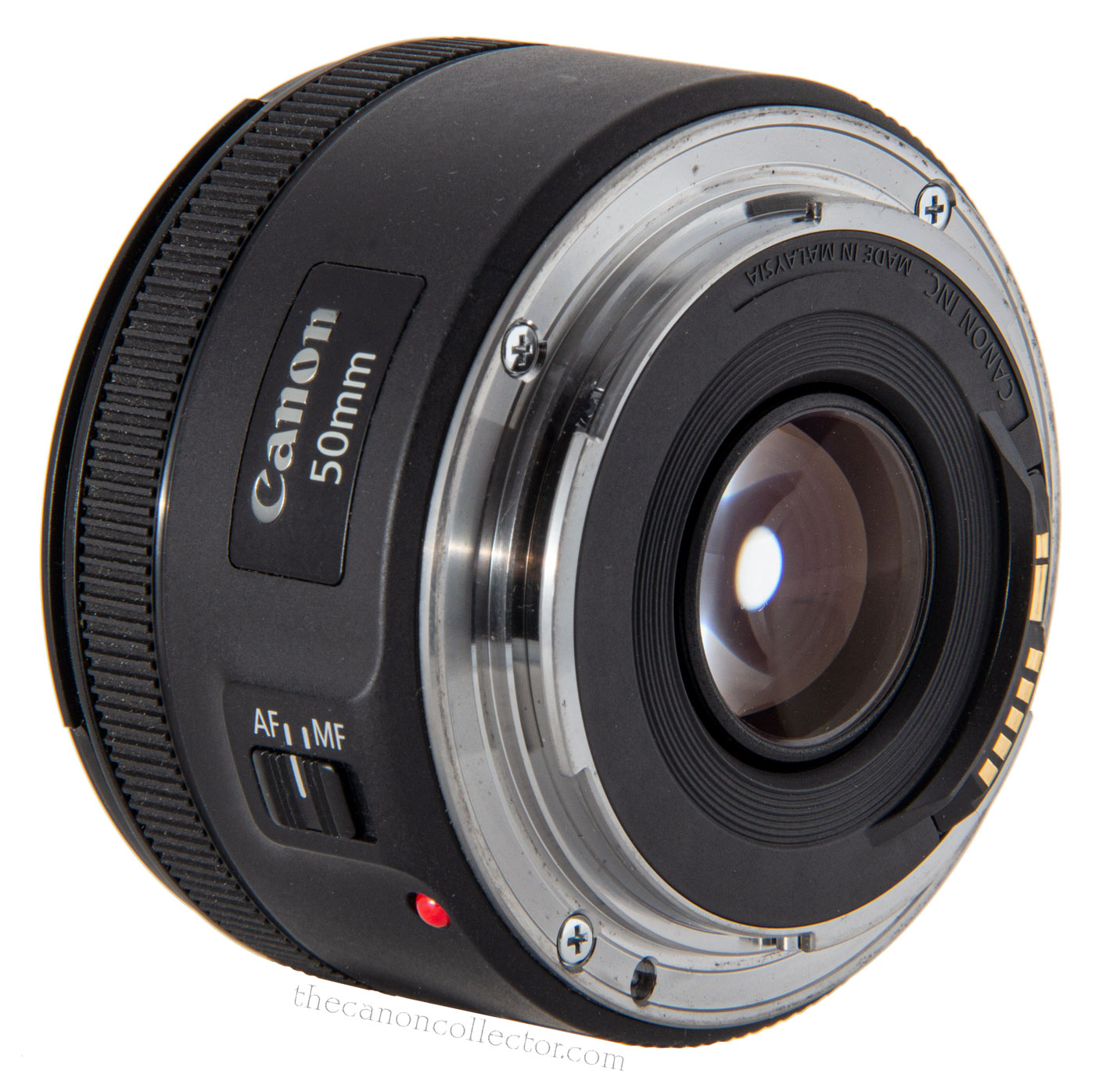 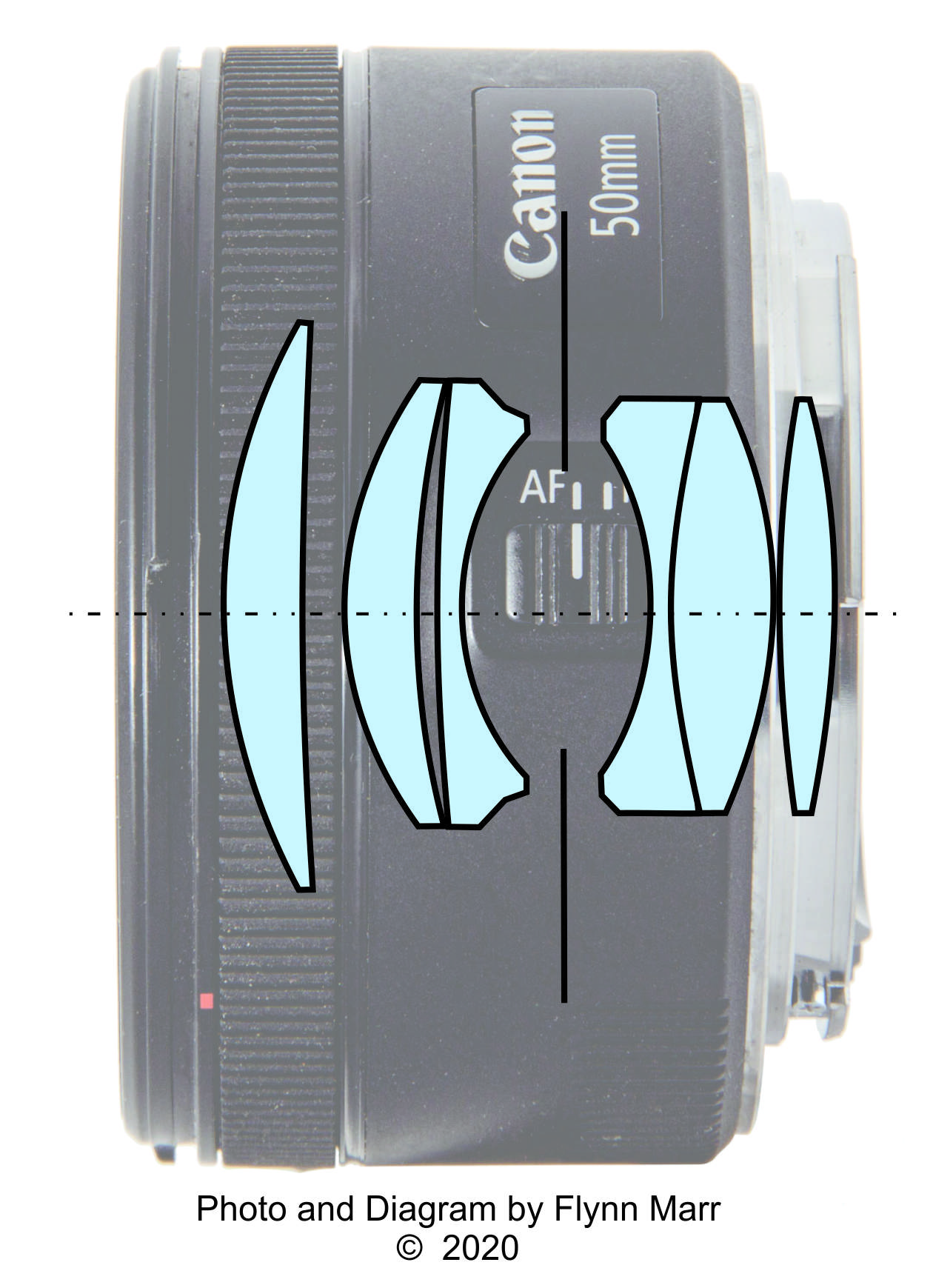 Canon has introduced three 50mm f/1.8 lenses into the EF lineup. The original was the Canon EF 50mm f/1.8 introduced in March of 1987. This was the most robust of the three iterations weighing in at 190 grams.

December 1990 saw introduction of the EF 50mm f/1.8 (II). This was the lightest of the three at 130 grams. It was very light, all plastic construction, including the lens mount. To be honest, it feels too light and insubstantial.

The current STM version was introduced in May of 2015 and with this model Canon attempted to address some build deficiencies and perceived deficiencies. This lens places in the middle weighing 160 grams, it has a metal lens mount, improved focus ring and stops down to f/22. Also the diaphragm has seven blades with rounded shape to provide a smoother bokeh.

Focusing power is provided by a Stepping Motor instead of the usual micro-motor of the earlier two lenses. This arrangement provides rapid accurate focus and is almost silent.

An added benefit of the Stepping Motor is that the focus ring is active while autofocus is engaged. Well, almost. The focus ring does not engage the focus assembly directly. It works by sending signals to the focus circuits in the camera which then translates the signals into focusing action. For this reason, the focus ring will only work when the camera is in single shot mode with the shutter button half depressed.

Although there is no indication on the lens itself, the elements have Canon’s Super Spectral Coating (S.S.C.) which is a proprietary multi-layered coating to reduce internal reflections and flare.

Reading on-line makes it clear that the internal optical elements in this lens are unchanged from the 50mm f/1.8 and 50mm f/1.8 (II) lenses and presumably the  quality of the images are constant as well. The differences are in the build.

In keeping with the low cost, the lens comes without lens hood or case. Just the front and rear caps. The lens hood is available at extra cost. It is the ES-68 and it has a bayonet mount with a lock button for security.

So now we come to the big question: how well does this lens perform? I began this exercise with the rather naive thought that, since this was a prime lens, that its performance would be superior to my “L” series zoom lenses. Ooops! Not only is that not true, but it is not fair to this lens.  What I did not take into account was that I was comparing a $170.00 lens to a $2,800.00 lens. Totally not fair.

Reviews of this lens on-line suggest that its performance is marginal wide open and only improves when you get down to f/5.6 to f/8.0. You can check out Ken Rockwell’s review of this lens. He generally likes the lens although he notes problems wide open. You can also have a look at dpreview.com’s review which does not have the same depth of analysis. They too rate this lens as good especially when stopped down.

The EF 50mm f/1.8 STM wide open mounted on my Canon R. You can see that the depth of field is very shallow, as you would expect. And the bokeh in the background is pleasing. In a picture like this the weaknesses of this lens turn out to be strengths.

So, what did I think? Well, I took images of brick walls at all apertures, the house across the road, scenes in the local park. And yes, this lens has some problems wide open. And it has some nice attributes as well. It vignettes strongly at f/1.8 but this is gone by f/4.0. However, it must be remembered that a modern digital camera, well Canon at least, can compensate for this to some extent in camera. In addition, sharpness falls off drastically in the corners. Again, this is gone by f/5.6.

But we don’t take pictures of brick walls and we often spend time creating in Photoshop the very faults we find naturally in the lens. So lets not look at pictures we would never take. Instead we should look at the kind of images we will want to take with this lens.

For an instance, take the picture on the left of my favorite model. Shot at f/1.8, wide open, the vignetting and softness in the corners is exactly what I would have tried to create in Photoshop. Sharpness in the face is more than acceptable for this portrait.

And yet, this lens has obvious problems wide open. But they are not problems in this type of picture. This demonstrates the importance of knowing the strengths and weaknesses of your lenses: you can select images to take advantage of what might otherwise be called faults.

There are times, however, when sharpness is important to your concept of an image. Take the Pine Tree below as an example. What appealed to me about this tree was the texture in the rugged bark. So I had two requirements for the image: the first was good detail across the image and the second was depth of field to handle the branches reaching out towards me from the trunk. The solution to both was to stop down the lens. And so this image was shot at f/16.

Because I was interested in real world performance I processed this image in Photoshop the way I would normally have done. Processing included sharpening, adjusting the Curves settings, deepening the color and contrast, and applying a vignette. 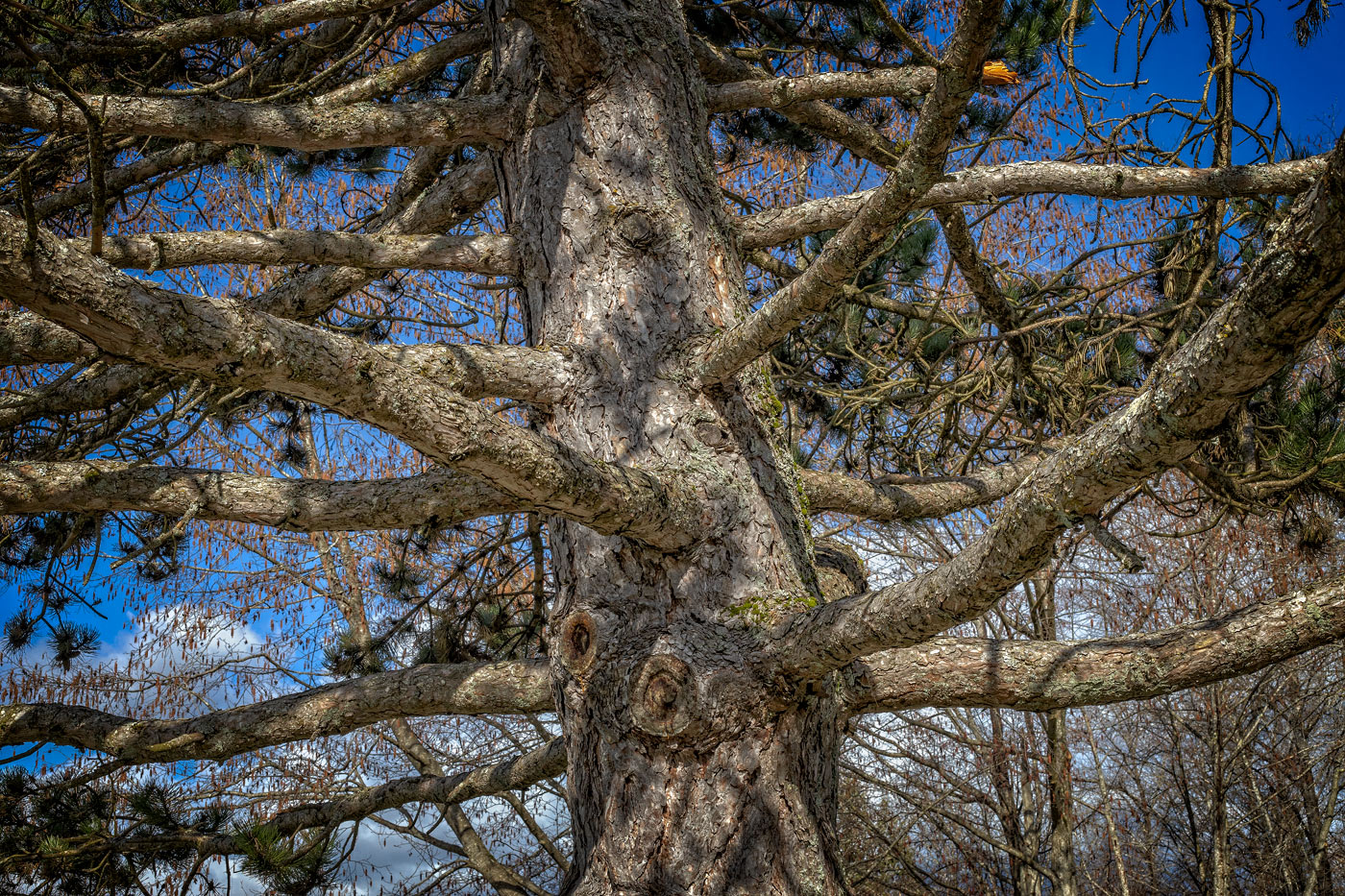 I have walked past this Pine Tree for years but I never really paid attention to it before. Then the other day I was looking for test images for my EF 50mm f/1.8 STM lens and I noticed the colors and textures amongst the branches of this tree. The camera was my Canon R and the image was shot at ISO 400, f/16 at 180th of a second. The ISO was pushed up so I could use f/16 because I wanted the depth of field to capture the branches as they reached towards me. Sometimes, when I like a picture, I can’t tell you why. Maybe its the roughness and texture of the tree or possibly the subtle colors. I don’t know what I like but I know it when I see it! I have processed the image the way I would with any image and that includes sharpening, saturation adjustments, curves adjustment and the like. The test here is to see how the lens performs in real world situations.

Looking at the image center at 100% the sharpness and contrast are excellent. As we might expect in the center of the image the lens is fully able to use the potential of the 30 mpx sensor. But what about the edges? 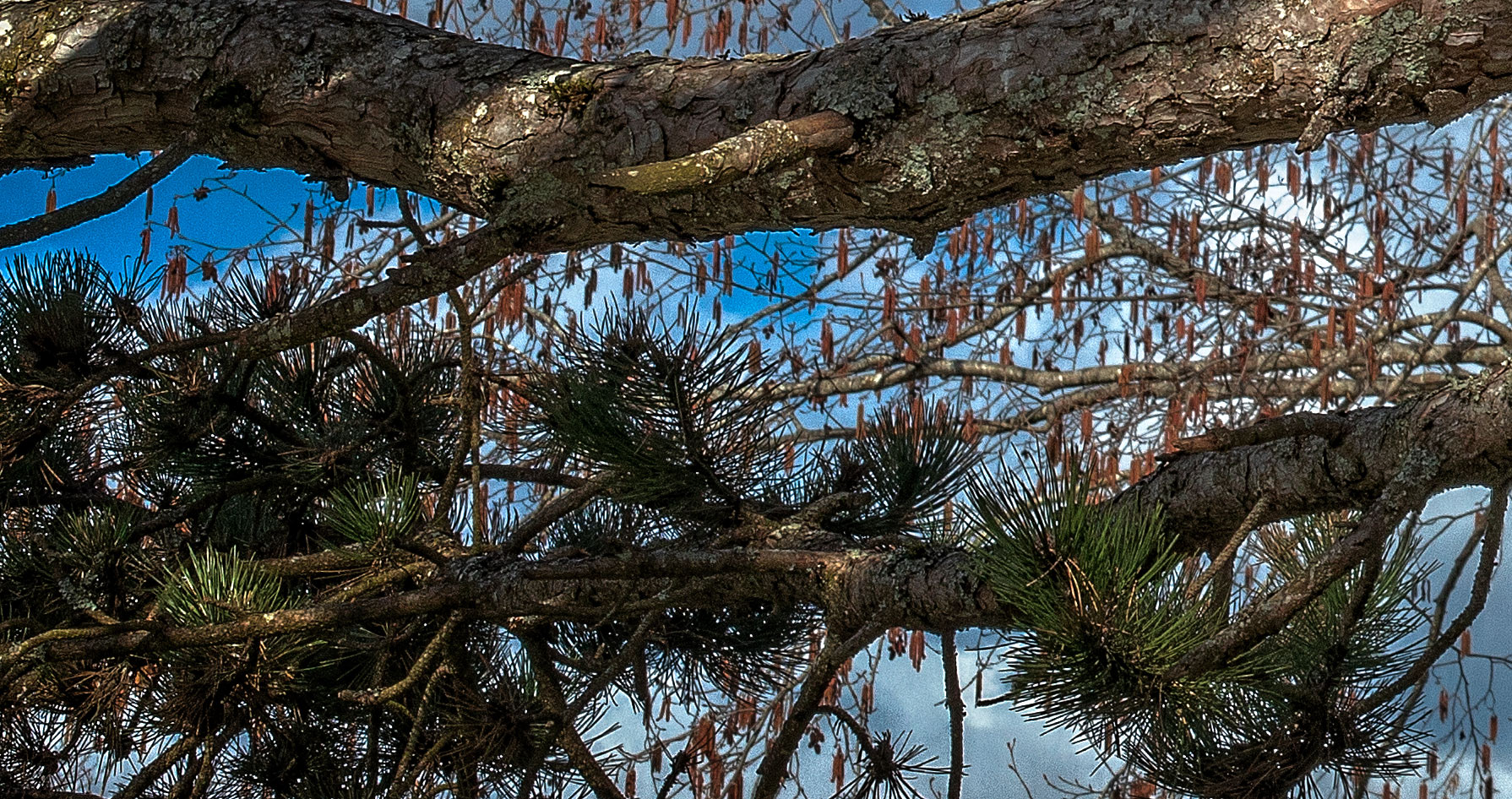 This is the bottom left corner of the image at 100% magnification. There is certainly nothing to complain about here. The thin white line around some parts of the branches is an artifact of the processing and not the lens.

Lenses are like people. Some are good at one thing and not at others. Some are easy to get along with, others not so much. Are there people who can do everything well? Very few. You have to chose your tool to suit the task. And that means knowing what the tools can and cannot do. The Canon 50mm f/1.8 STM is small and light. It is capable of great photographs. Would I use it to earn my living. No. There are better choices for critical applications. For family or travel photographs it is hard to imagine a better choice. Mounted on a Rebel camera you would have a small lightweight package capable of excellent photographs.

And so, to answer my own question, this fifty is nifty enough!