My second outing with film happened on June 12th of this year. I chose a black AE-1 to try out with an FD 50mm f/1.8 lens, the standard workhorse of the FD lenses. This camera is a lot less automatic than the EOS A2 I reported on in my last post. For film I chose a roll of 400 ASA Ilford with the same dubious past as the last roll: a sealed box but way over its expiry date by a couple of decades. And I found that shooting the AE-1 was a total pleasure.

The event we attended was the Italian days street party on Commercial Drive in Vancouver. This always a fun festival! It was an overcast day but dry and reasonably warm: poor light and comfortable. 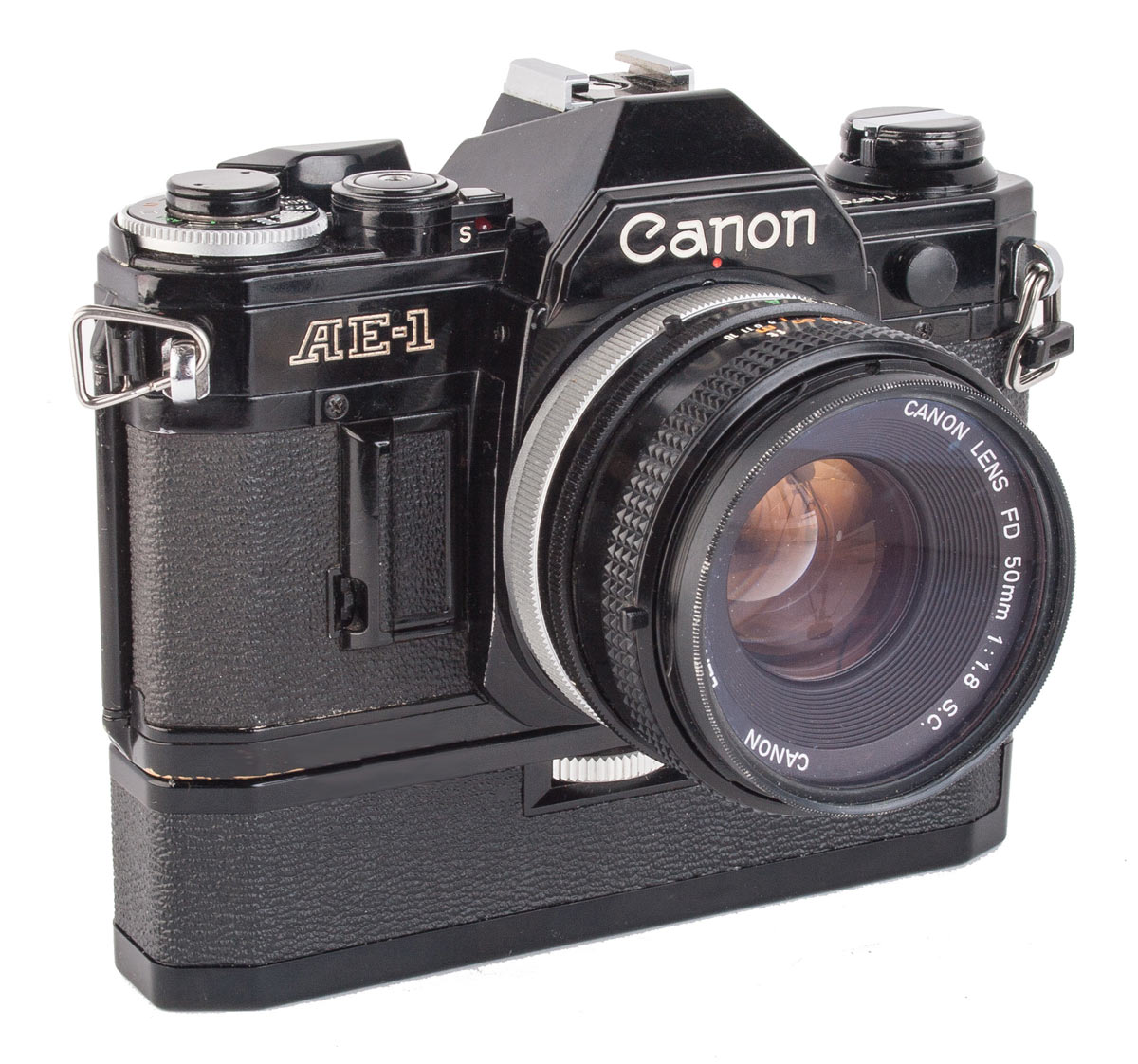 This is the AE-1 I chose to try out with the Winder A attached to it. This is a really sweet camera to handle and to shoot. 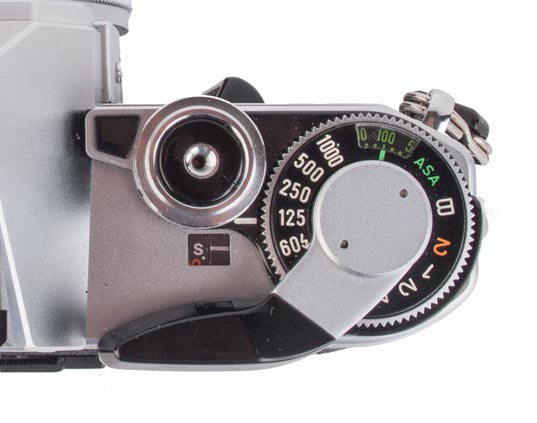 In Automatic Mode the only control one has is the shutter speed which is set by a very large and convenient dial under the rewind arm. The front edge of this serrated wheel is easily moved with the index finger along the front left edge of the camera top plate.

My first problem was loading the film. I thought I knew how but obviously not. I was merrily shooting away when I realized that the rewind knob was not turning when I advanced the film. A sure sign of trouble inside. But what? I had no darkroom handy to open the back so I risked all and snapped the back open in full daylight. Well, I hunched over the camera but that would have done little to protect the film. I found that the film had not caught on the take-up spool and had not advanced at all.

Once I got that straightened out I began shooting again. Now all seemed to go as it should. This camera was a pleasure to shoot. All manual but easy. You set the film speed. Then you choose between automatic and manual. I chose automatic by setting the lens to the green “A” on the aperture ring. And that was that.

Once that was done it was all Shutter Priority. You set your speed with the large easily managed wheel on the top of the camera, right side, and the camera did the rest. Because the lens is normally fully open and only stops down for the instant of exposure, you are not even aware of the light metering function. But there is no totally automatic setting. You have to choose shutter speed. I suppose once it is set you really don’t have to look at it again and in that sense, once speed is set, it is totally automatic until light conditions move beyond what the aperture changes can handle.

When I got the film back from Kerrisdale Camera I found all 36 exposures to be excellent: every one of uniform exposure and density. The metering was excellent. 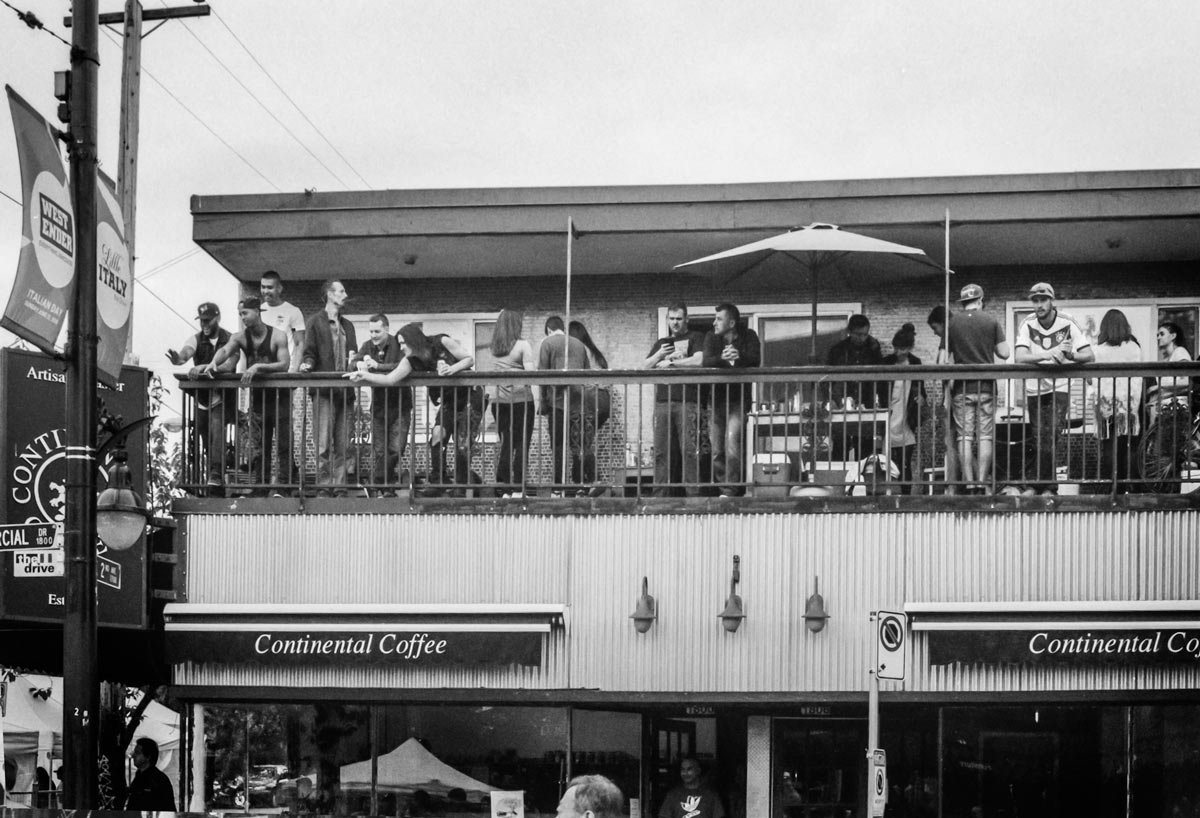 The overcast sky gave very flat lighting which is good for assessing the quality of an image. Not dramatic or artistic but very even. I am unsure about the effect of the age of the film but it cannot have helped. The images obviously suffer from the inherent limitations of fast film: grain, loss of detail, poor contraxt. That said, for a first try I am OK with the results. 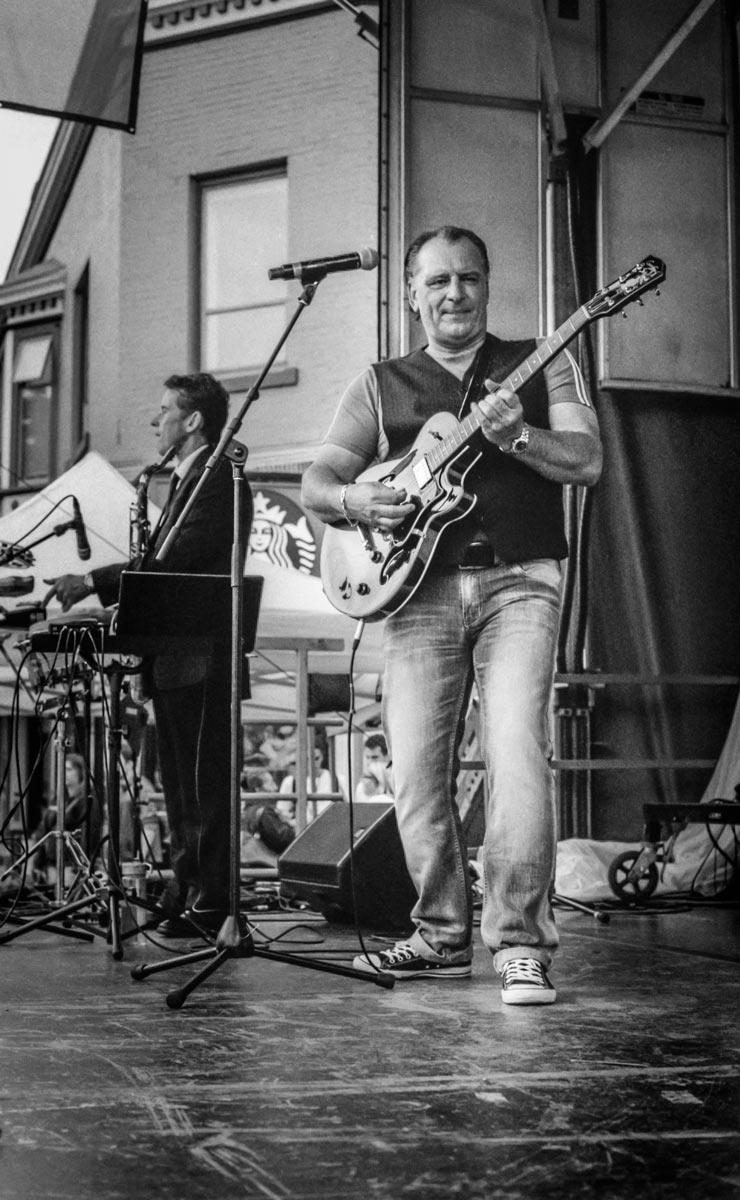 Lou Morocco was playing on one of the stages set up along “the Drive”. This is a fine image of Lou, especially so when you remember it was a 50mm lens and I have had to crop it to bring him forward.  Below to the left I have taken a section of this image and enlarged it further. It stands up pretty well. 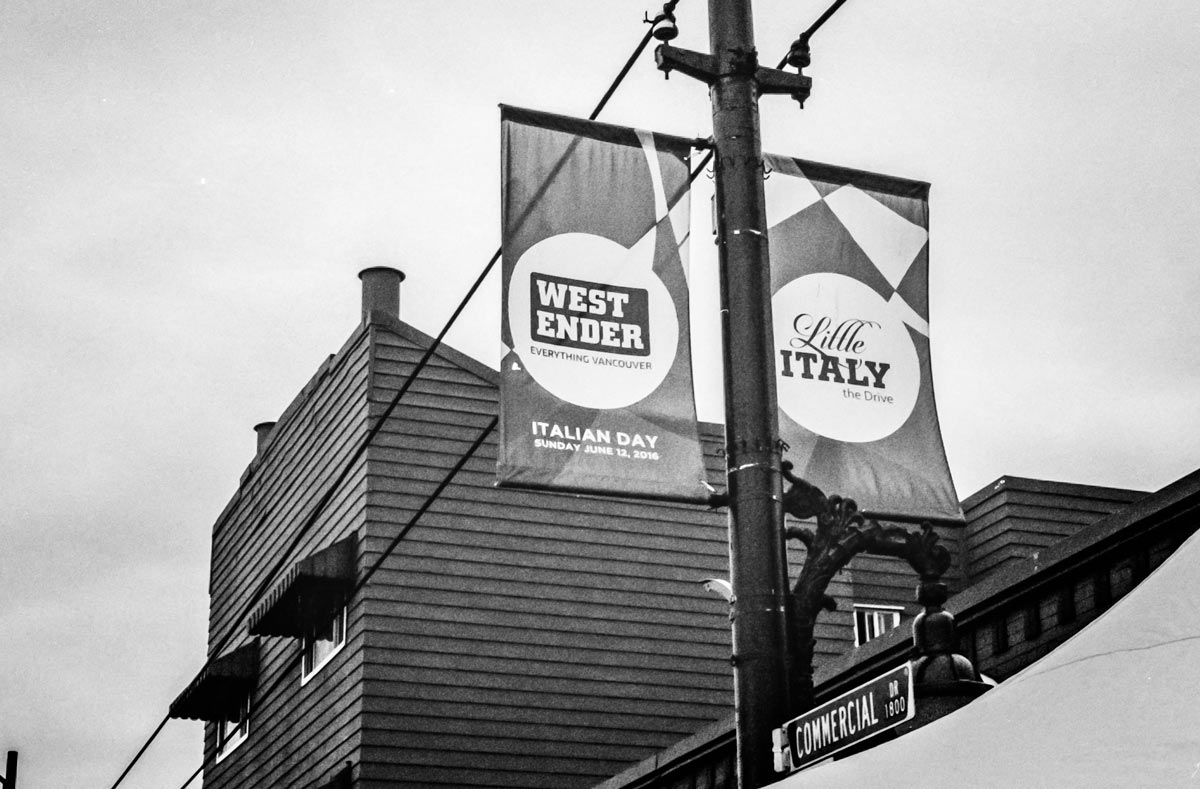 This is an image of some banners on lamp standards. This is a good image to examine because the subject was stationary and bright so I was able to use a fast shutter with a small aperture. It seems pretty sharp. 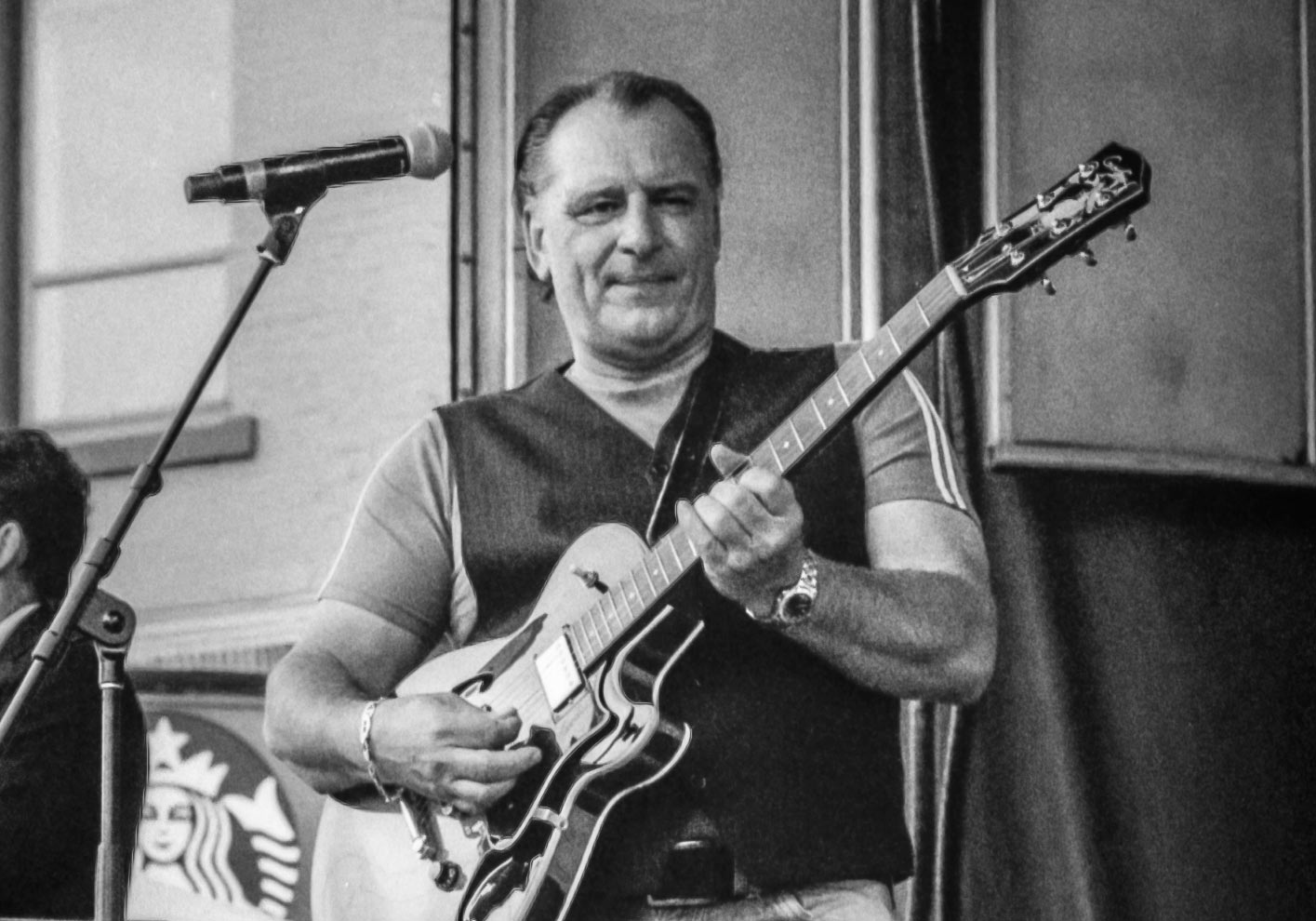 This is a section of the image of Lou to the left. I feel that I can improve the sharpness and tone of the images considerably but considering the conditions this is not bad.

I did not play with the manual settings but if I had chosen to do so, the light reading was available in the view finder. All I had to do was set the shutter speed and then adjust the aperture to the value shown.

I had chosen to shoot with a Winder A attached to the camera and so every time I took a picture the film advanced smoothly and rapidly. The winder worked well and allowed me to concentrate on taking pictures. It was also much quicker than winding manually. I can’t believe I took pictures all those years without any automatic aids such as this.

I now understand why the AE-1 was so popular. It is compact, light, yet feels solid and well made. It shoots smoothly and the metering is consistently good. This is a great little camera.

I am still not sure just how good an image is possible. These pictures are not bad but I know that this camera and I could do better: better film, better developing, higher resolution setting on the scanner. And we’ll have to talk about that scanner one of these times! It’s good, but …….