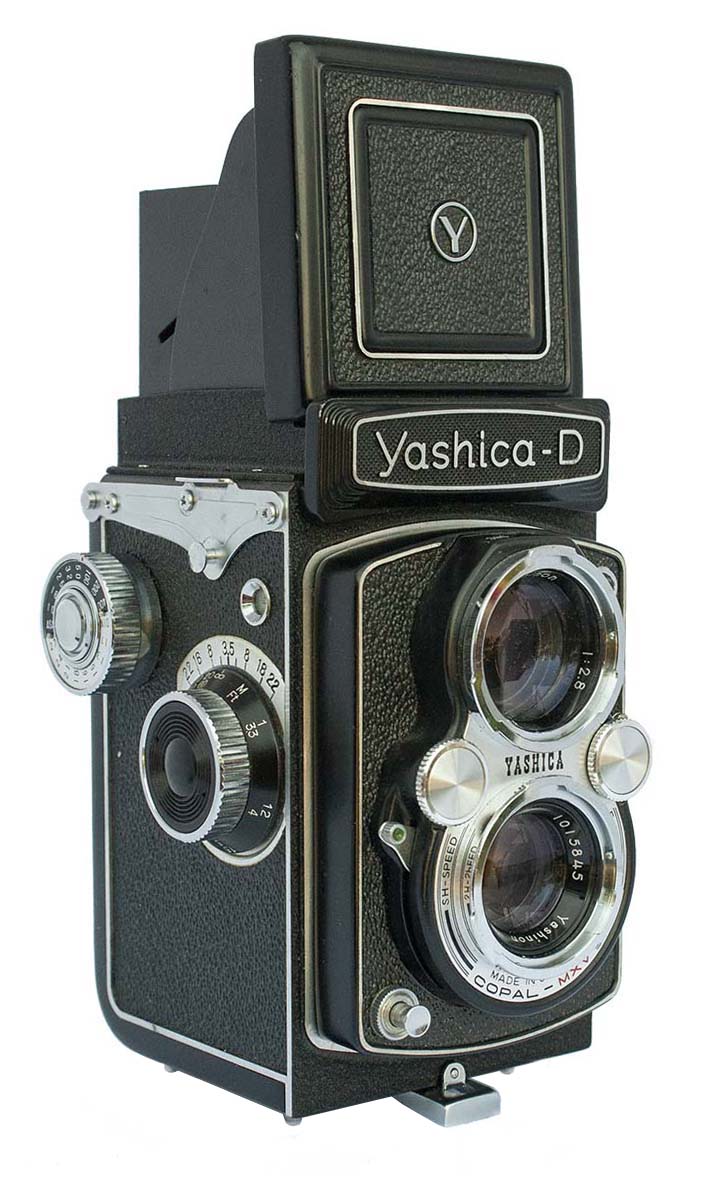 This is the Yashica D I acquired in the last several days. You can see that it is in excellent condition.

That’s the problem with collecting, isn’t it: like a sweet tooth, once you get a taste you can’t stop. I just wrote about buying a Yashica A twin lens reflex for reasons of nostalgia. I had one as a teenager and remember with fondness using it. And here I am using one again. But that is not the collecting part.

I was on Craig’s List the other day and found a gentleman selling an assortment of cameras his father had and in that group of cameras was a Yashica D. I went to see these cameras and the price on the Yashica was excellent. What was I to do? I bought it. It was not my fault, really! Now I have a Yashica A and a D. Well, what about B and C? And is there an E? (Yes, yes there is an A, a B and an E. Hmmmm……) You see what I mean about collecting.

Once I had my new treasure cleaned up I began doing a little research to learn more about the Yashica TLR’s. It is interesting that Yashica did not really record much about its early history and production records or those records

The Model D looks much more like its more expensive German counterparts. 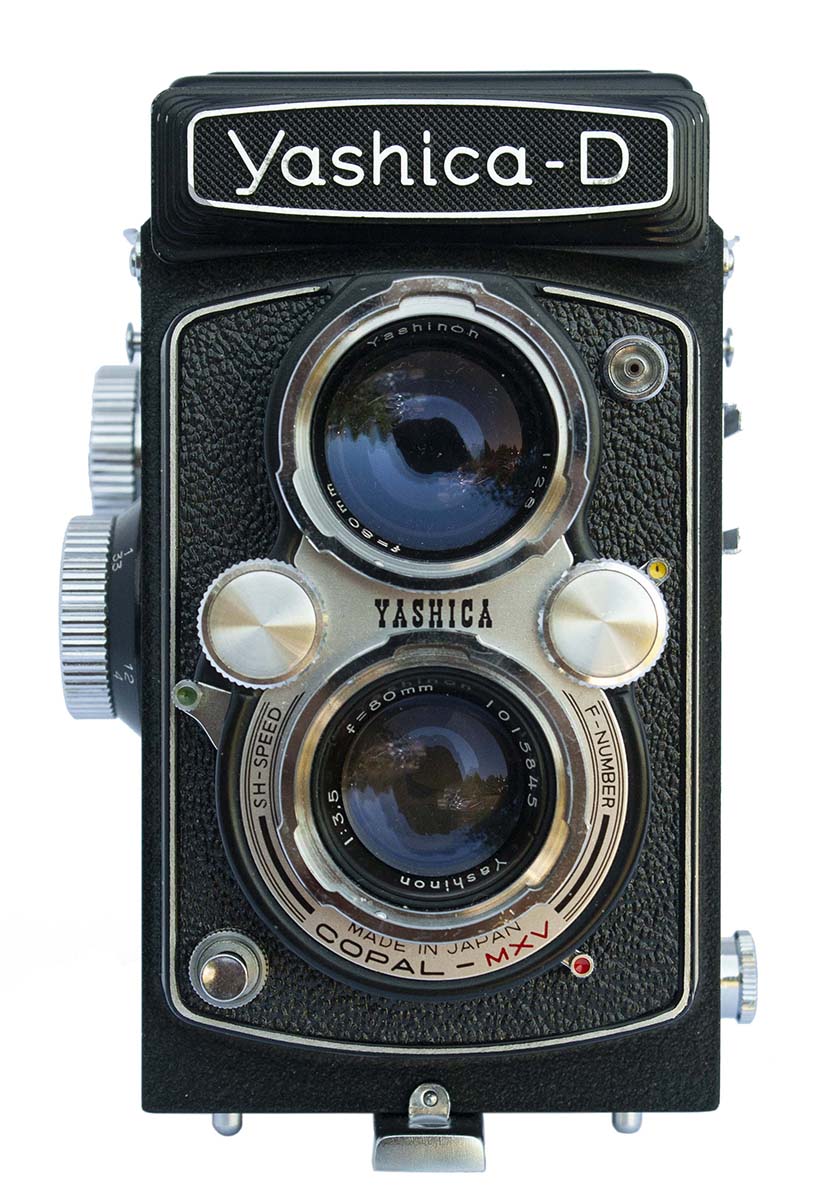 The lens and control assemblies differ greatly from those found on the Yashica A. 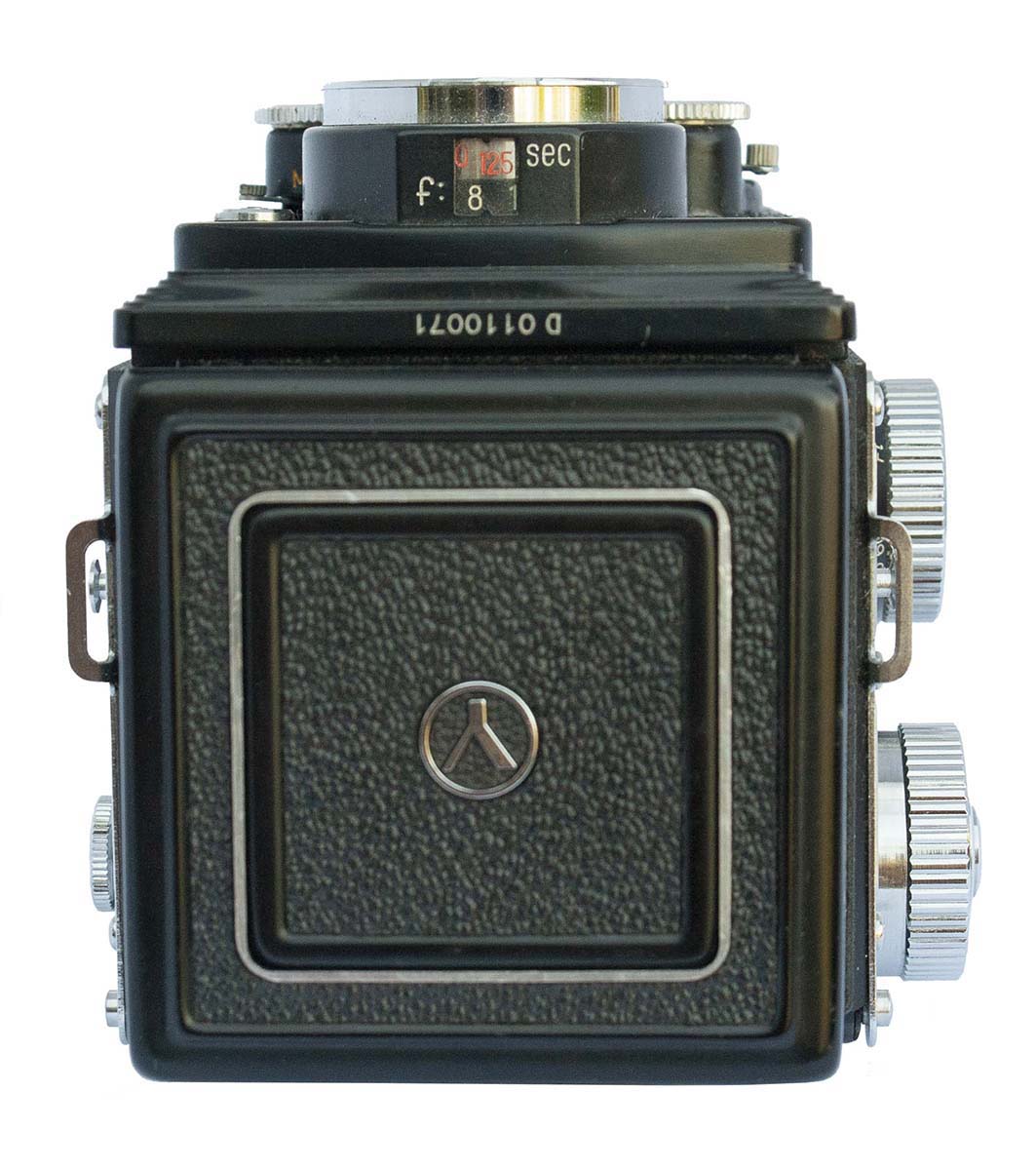 F stop and shutter speed settings are visible in the small windows above the lenses. 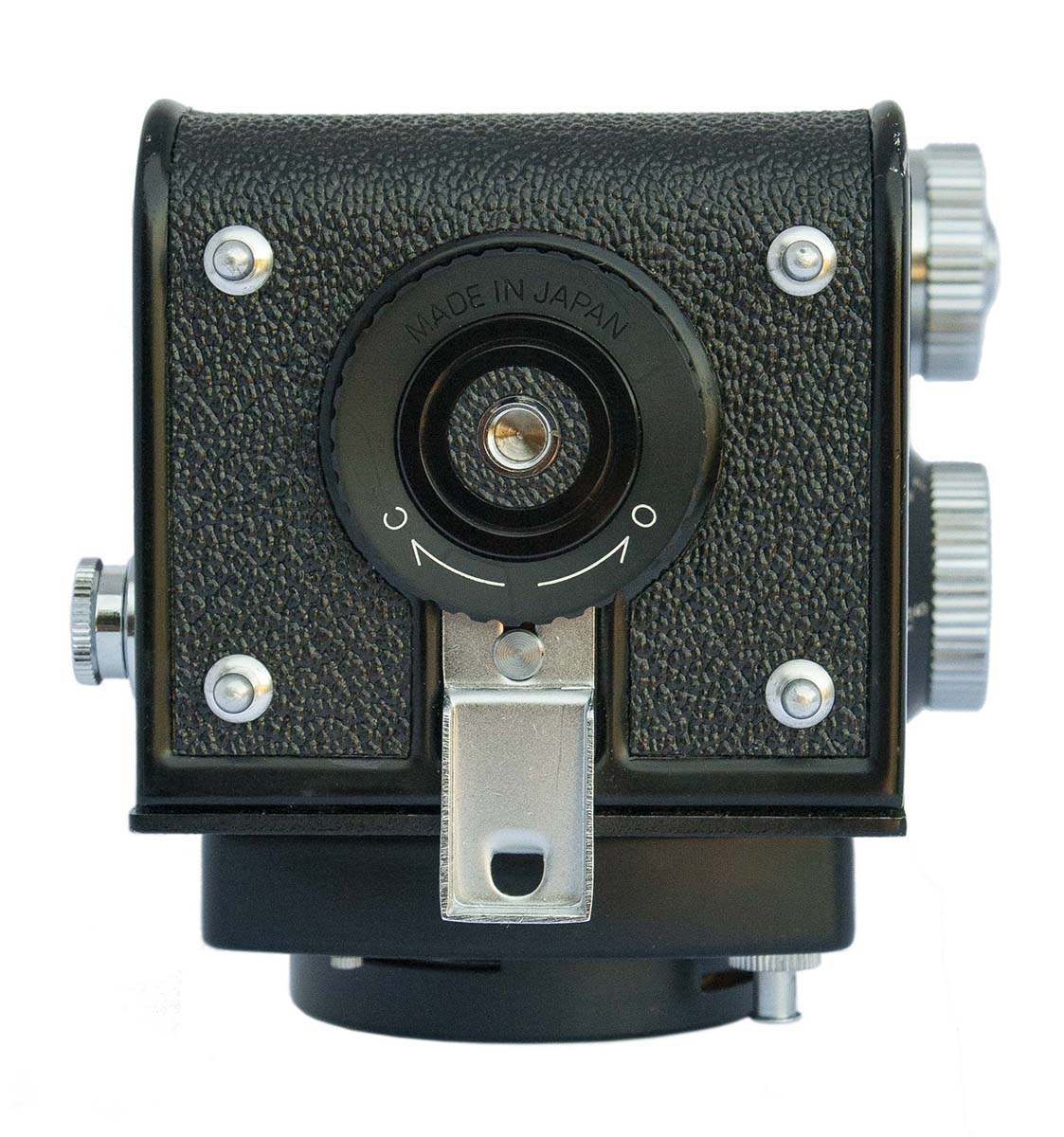 The bottom of the Yashica D, like the Model A, has only the lock to close the camera.

have been lost over the years. So collecting these cameras is a challenging undertaking.

In my reading I came across a website that is full of excellent information: http://www.yashicatlr.com/. If you are interested in Yashica Cameras this website is an absolute “must” read.

The Yashica D is very like the Yashica A but it was a more expensive model that came out about the same time. It uses 120 film giving 12 6 x 6 cm images. The production dates are approximately 1958 through 1974. Early copies of this camera had the Yashikor 3 element 80mm f 3.5 but later versions had the improved 4 element Yashinon. The later versions also had a Yashinon f 2.8 viewing lens to give a brighter image in the viewfinder. This is what I have. 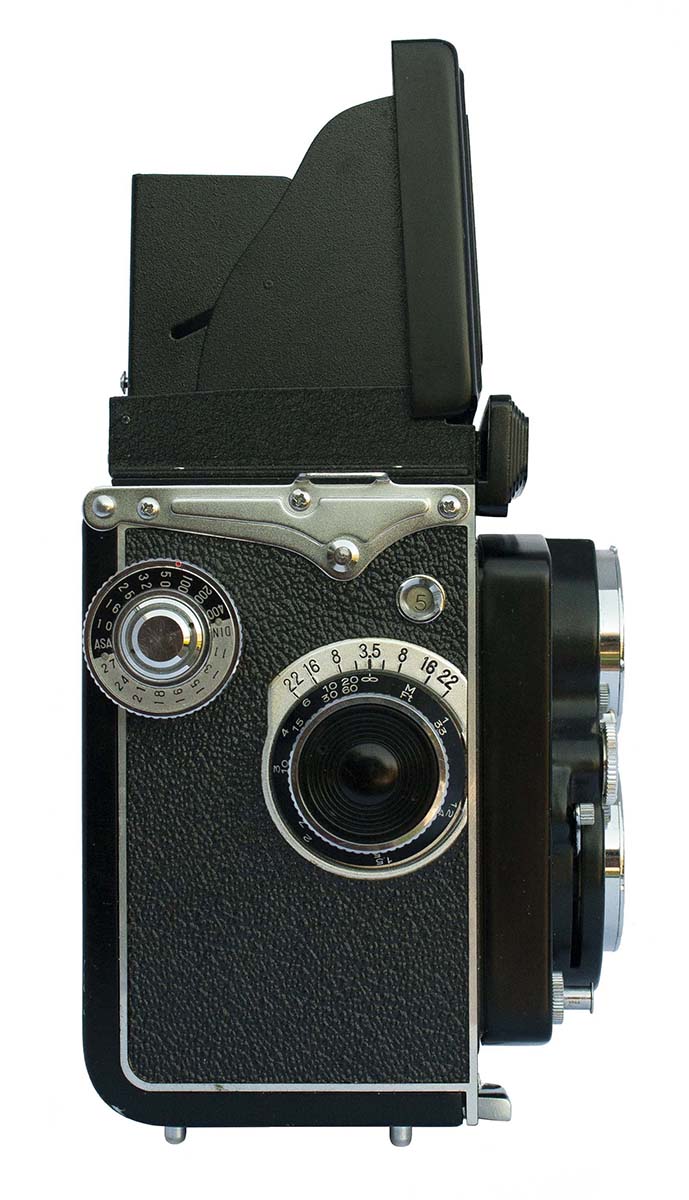 The right side has the same layout as found on the Model A: film advance and focusing. 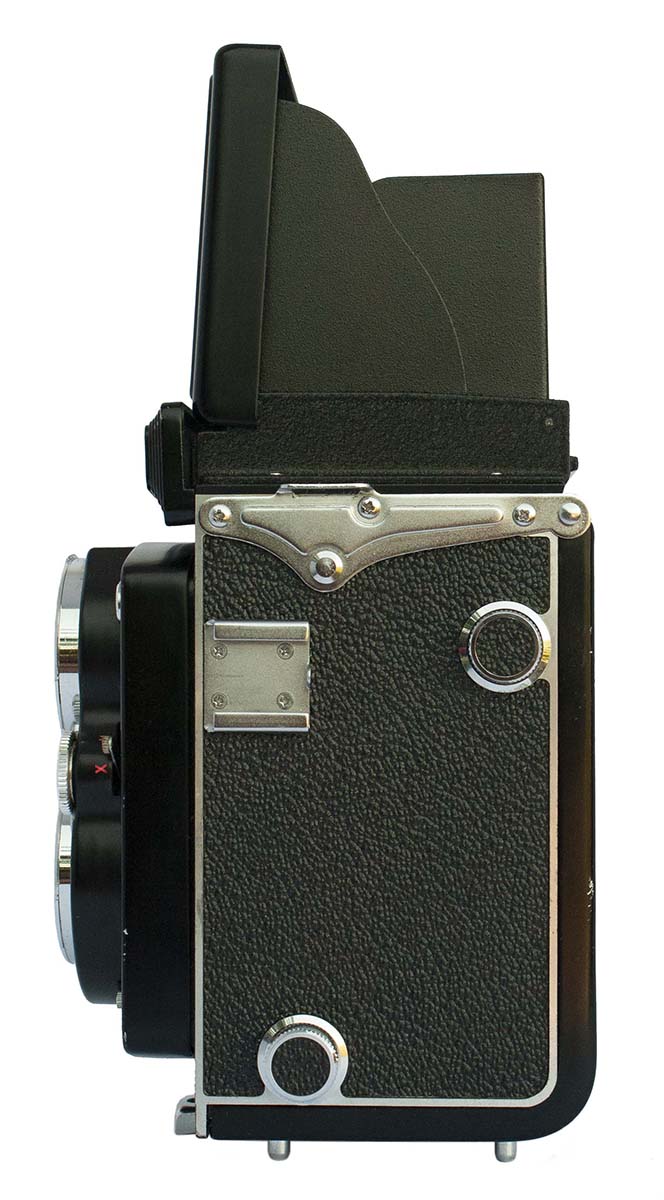 The left side has the “cold” shoe. A camera strap attaches to the silver bar at the top on both sides. 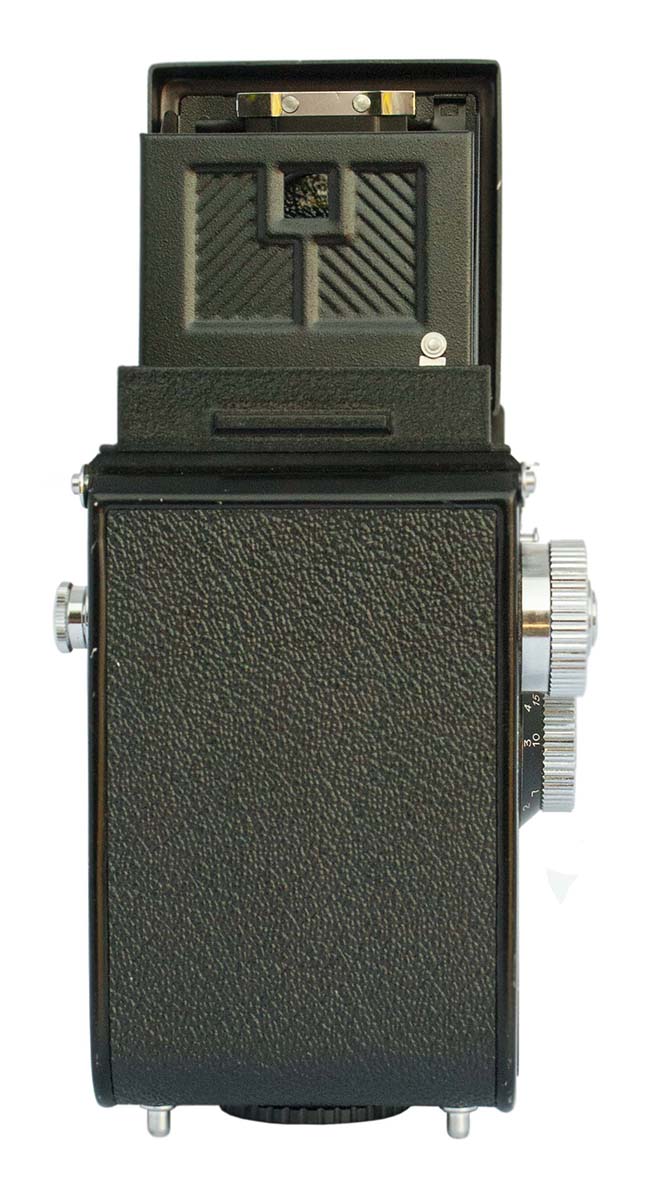 The back is plain. There is no little red window to see the exposure number on the film.

Besides the better lens, the improvements are in the range of control this camera provides. F stops are still 3.5 to 22 but shutter speeds run from 1 second to 1/500th. This is a considerable improvement on the Model A’s 1/25th to 1/300th. The shutter and f stop are set by turning small wheels on either side between the two lenses.

My new camera has the f 2.8 viewing lens and the ground glass is noticeably brighter. This makes focusing easier however, for accurate focus, the magnifying glass should be used. 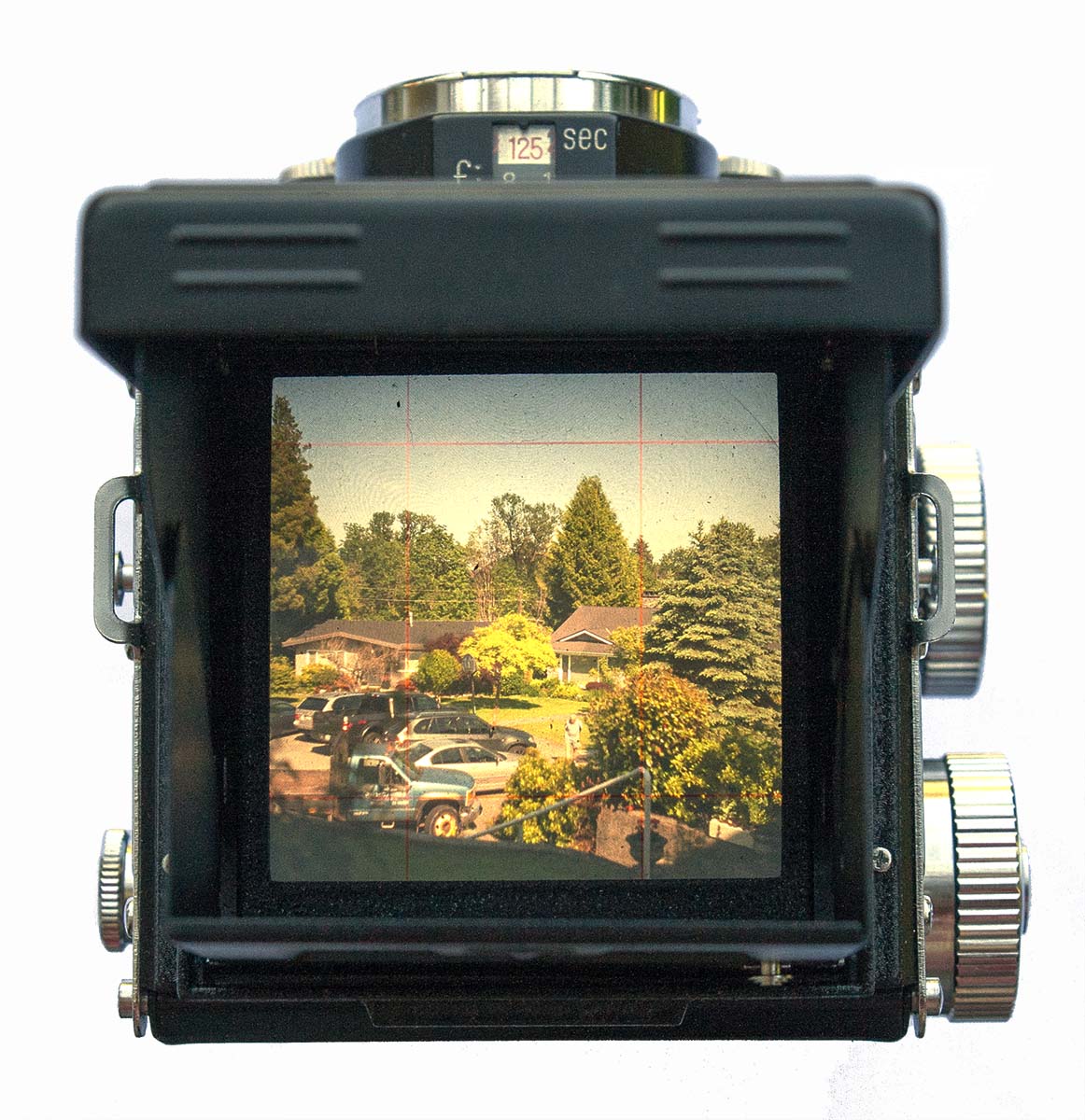 The ground glass is brighter than on the Model A thanks to the f 2.8 viewing lens. 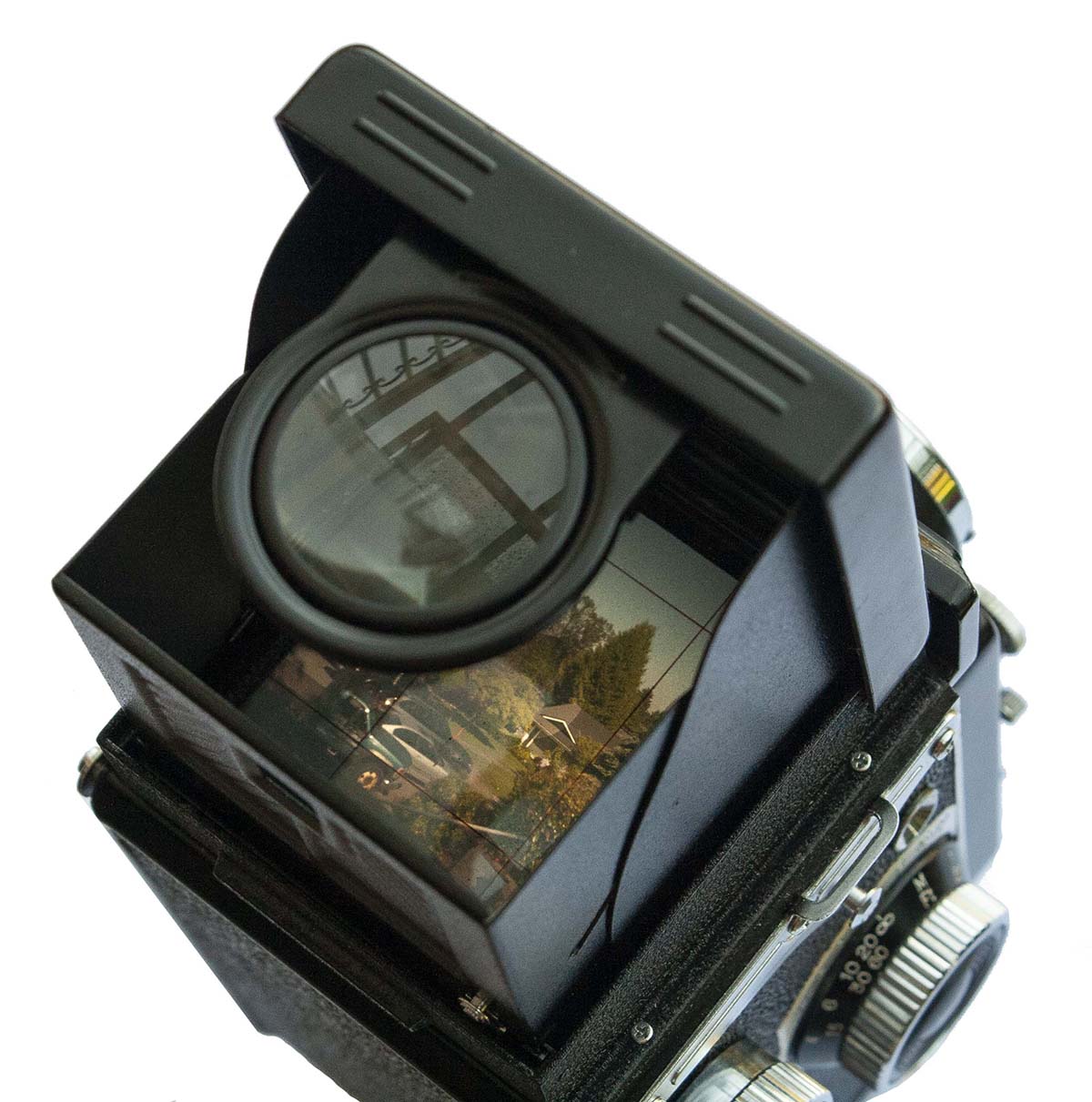 For accurate focusing the pop-up magnifier is essential and is easy to use.. 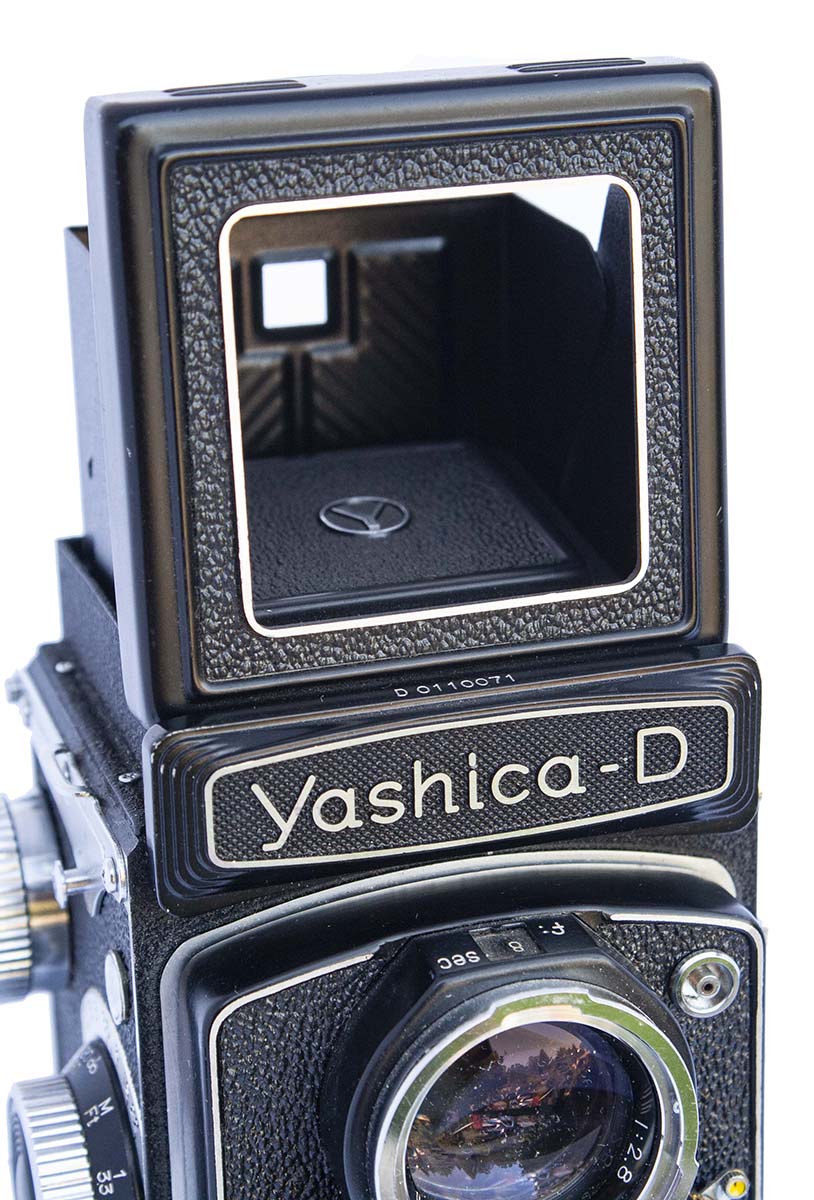 There is even a sports finder without optics for fast moving action. 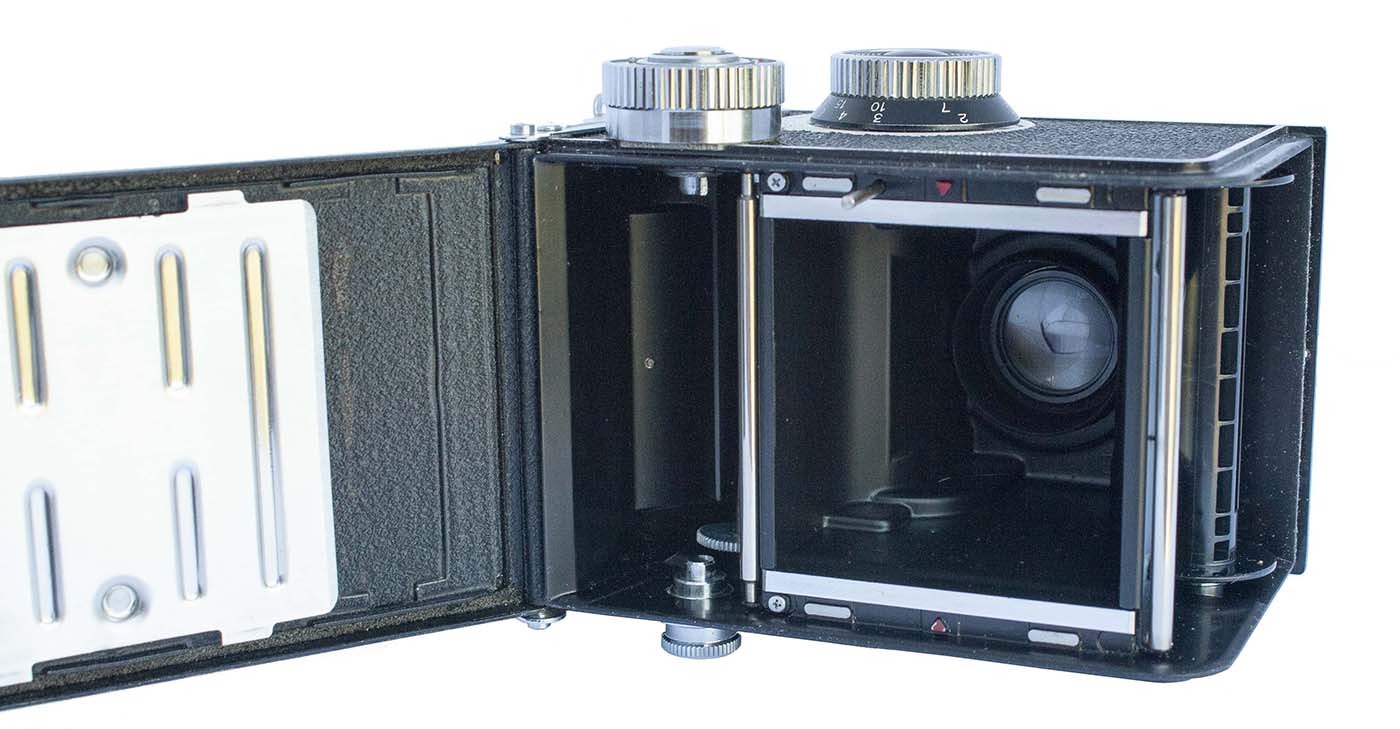 The interior strongly resembles the Model A. 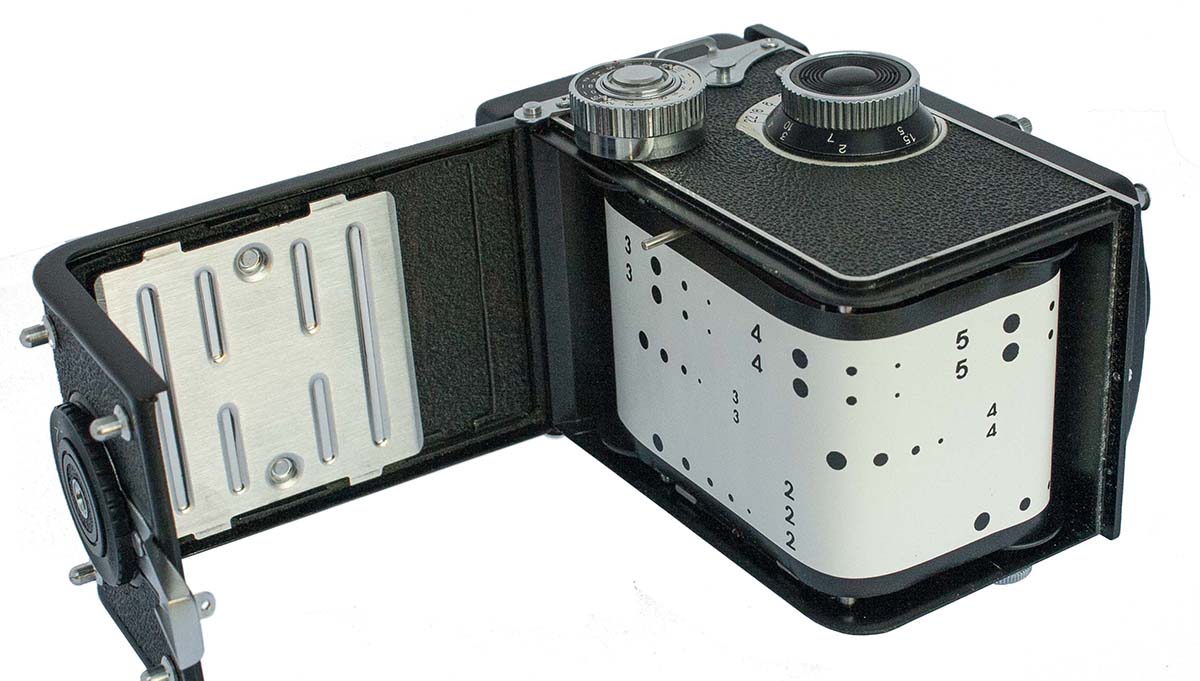 The film is loaded and camera opened. 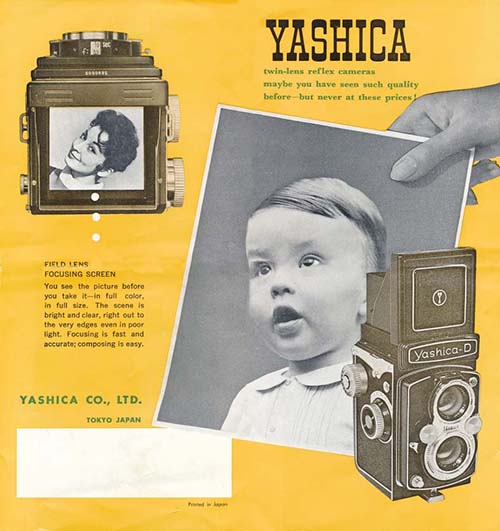 One page brochure for the Yashica D 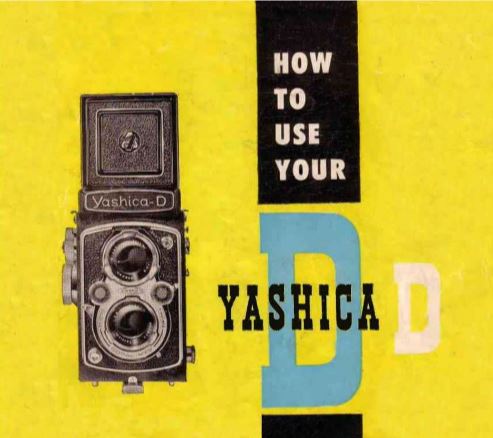 In most other respects this camera and the Model A look and feel alike. They both have a solid enjoyable feel in use. Although they are copies of more expensive German cameras they are not cheap knock-offs. These are quality cameras.

Details of my Model D are: