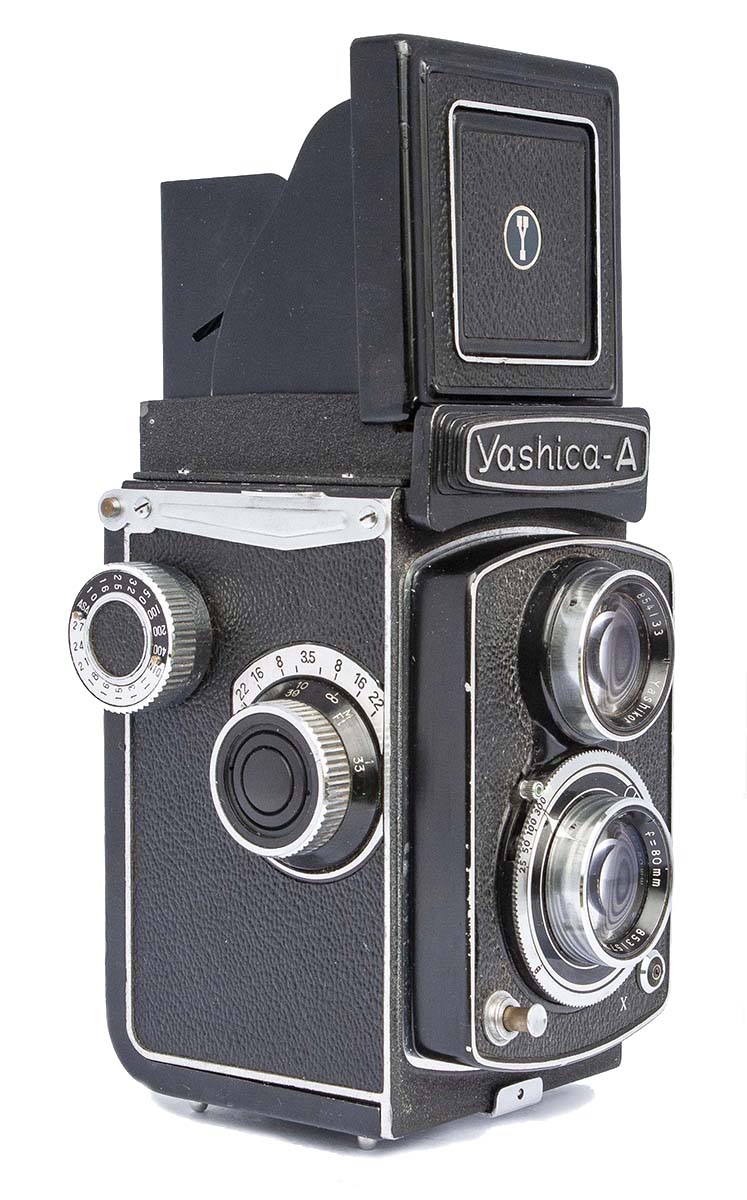 This is not my Dad’s Yashica “A” I talk about here but one I have acquired recently and cleaned up.

I am standing between my Aunt Katherine and Uncle Harold at the Honolulu airport in Hawaii in 1958 and in my hands I am holding my Dad’s Yashica “A”.

I was in high school in Toronto when my father bought a camera for the family. He was not a photographer by any means but he wanted a decent camera to take large color slides which were all the rage then. I had my Brownie Hawkeye but dad was after something with more features. He chose the Yashica “A” 120 roll film camera.

This camera was produced by Yashica between the years 1958 (there is some question of the exact year) to 1969. It physically looked like the Rolleicord which was itself a less expensive version of the Rolleiflex camera. Compared to my old Brownie, it was a Cadillac! I remember spending time just playing with the aperture and shutter controls and being fascinated with them. Now it seems such a simple camera but, then, it was complex to my limited experience. And for learning the basics of photography, shutter speed and aperture control, it was perfect.

I remember taking the Yashica to Hawaii in 1958 so it must have arrived in our home in the first year or so that it was on the market. I have always loved things technical and this was magical. I could vary the shutter speed, I could change the aperture, and it could be focused. I didn’t know what all of that meant at the time but I set out to learn.

It had no built in light meter (things were weird in those days) so Dad also acquired a simple selenium cell meter to go with the camera. Nothing automatic. Perfect for learning. Today one can take great pictures perfectly focused and exposed and never learn anything about photography, about light, or about the functions of the camera. Back then, you had to learn.

Eventually I wanted to try my hand at developing a roll of film. It was Christmas 1959 or maybe January 1960 that I made my first attempt. It was black and white 120 film taken on this camera. Looking back, developing that roll was so primitive! I had no film tank; I simply had a set of three small trays made by Kodak. They were each a different color and would nest one inside the other. The smallest would just hold a 5″ x 7″ print. I filled  the largest with developer and, holding the film between my two hands, I rolled the film through the developer, back and forth, in the pitch dark. Then a bath of acetic acid and then I rolled it through the hypo. Great fun. But I got images and I was hooked. 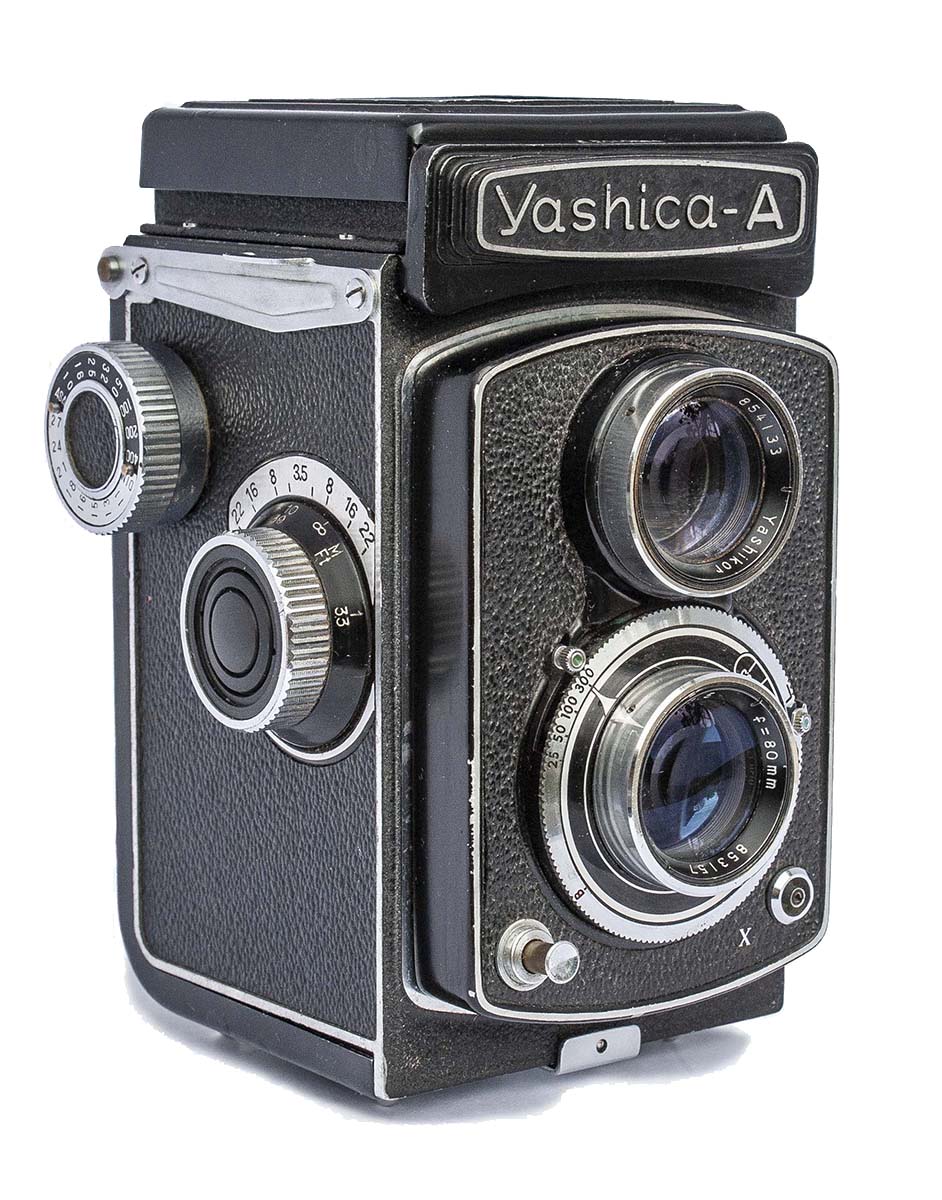 This Yashica “A”  controls may be simple but they are laid out where you would expect them. A neck strap can connect to the silver bars at the top of the sides. 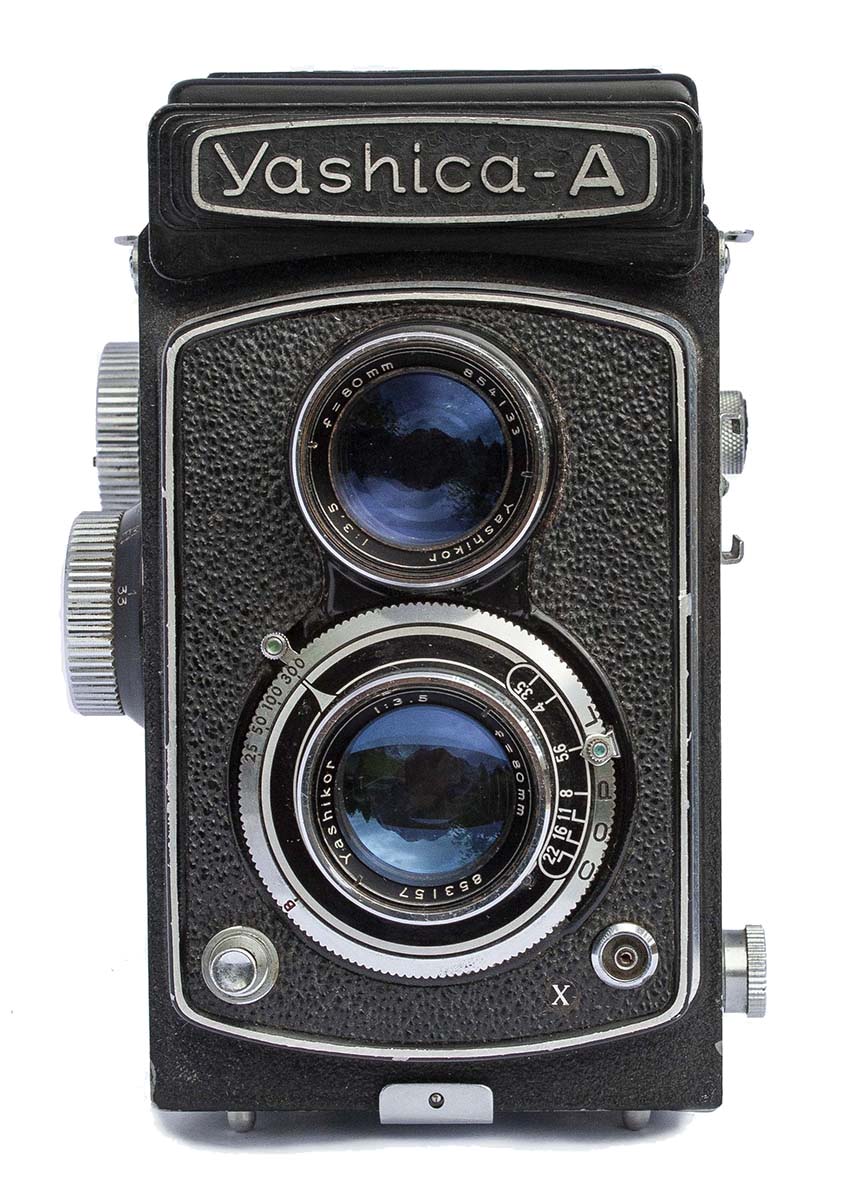 In the picture the shutter button is on the lower left and the PC “X”  sync socket is on the right. Shutter and aperture settings are visible on the ring around the lens. 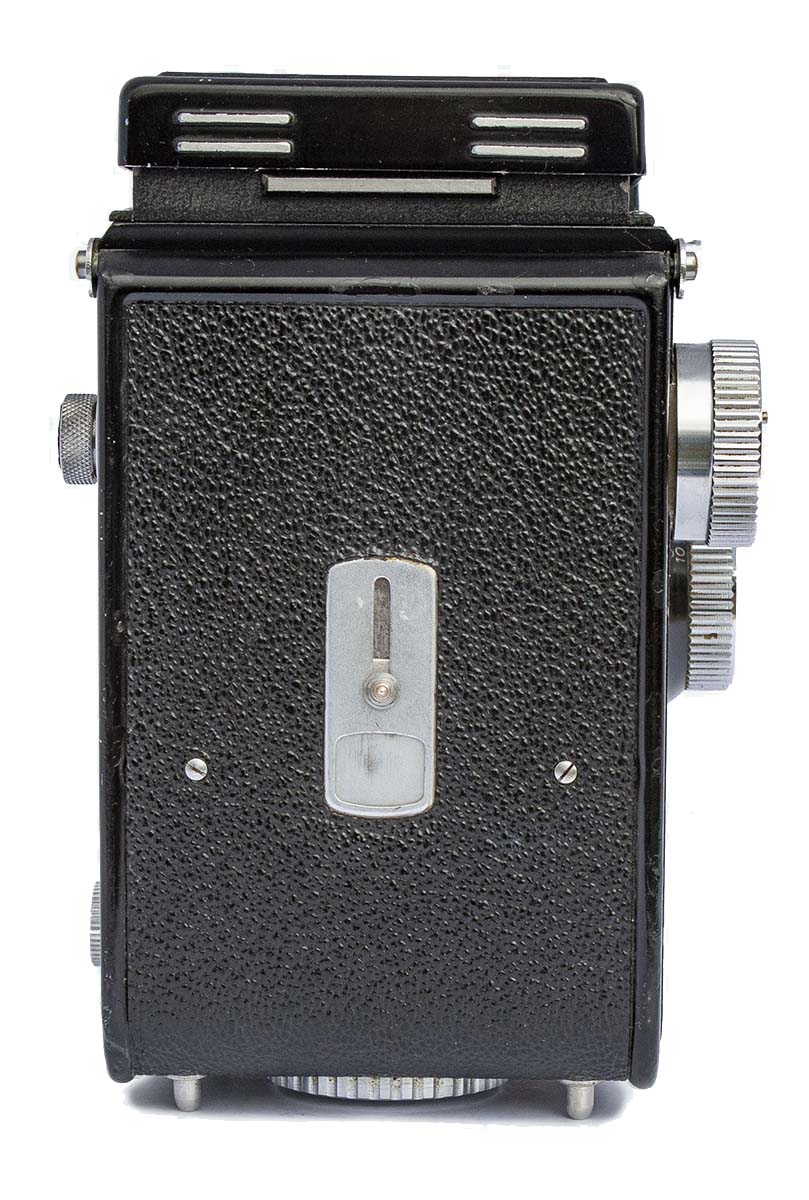 The thing on the back of the camera is the ruby red window to read the film image number. It is covered by a sliding door to keep out extraneous light. 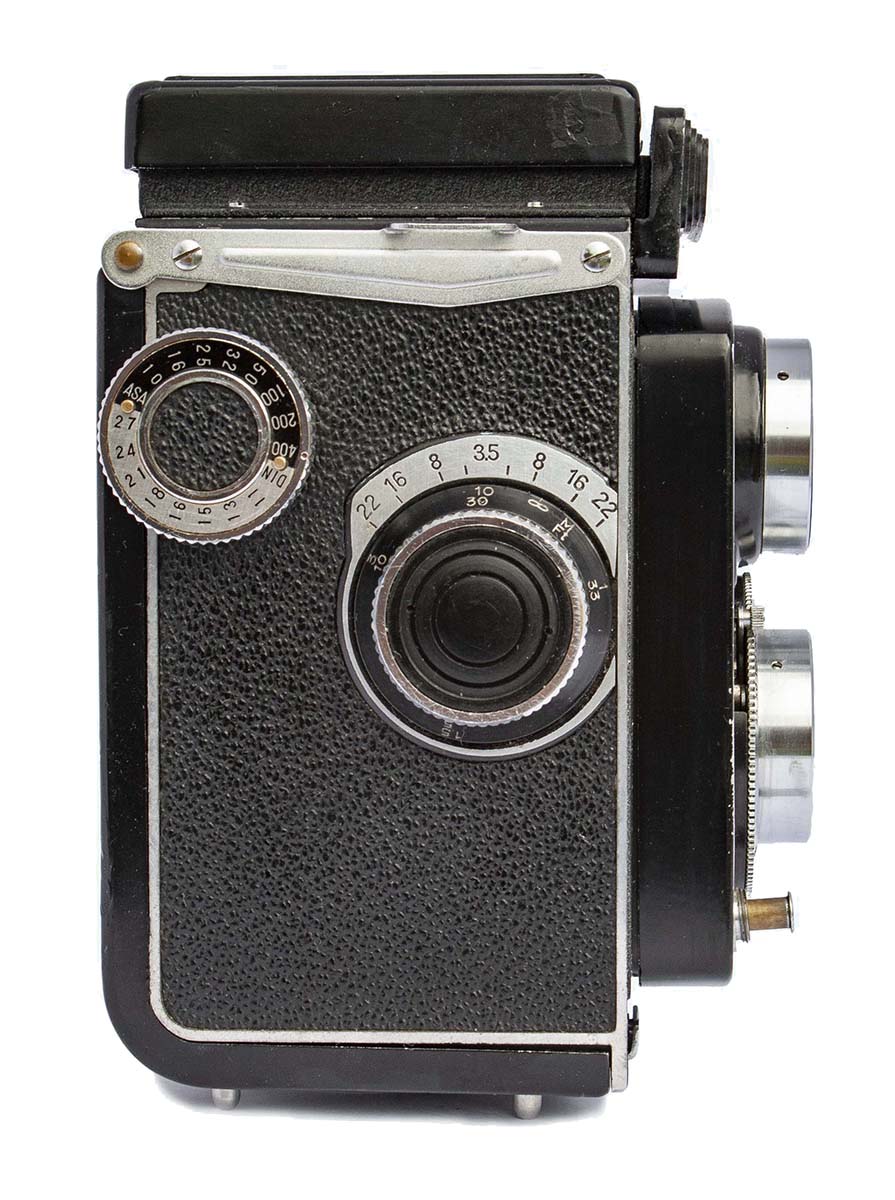 On the right side are the film winding knob and the focus adjustment. 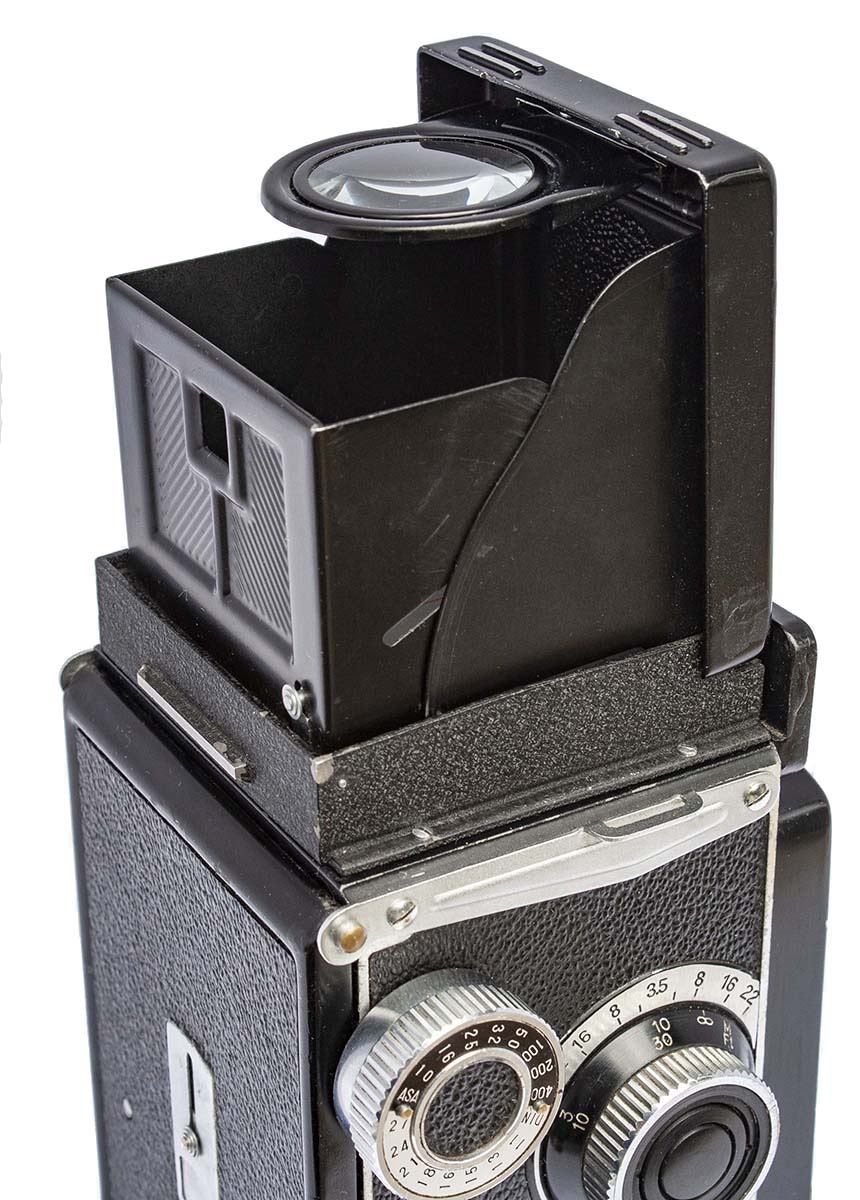 The ground glass screen is protected by a folding metal hood. 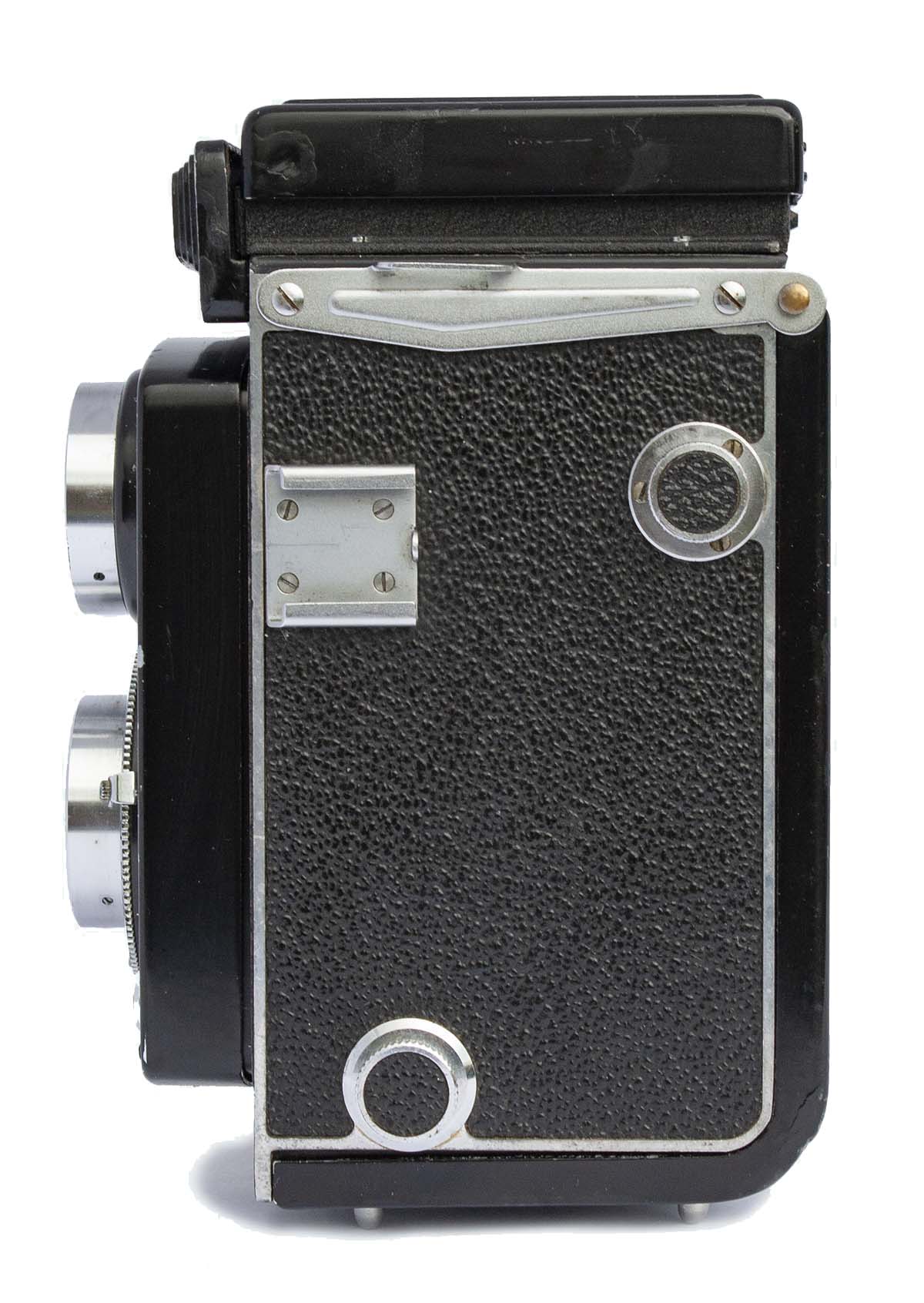 On the left side is an equipment shoe for mounting a flash. 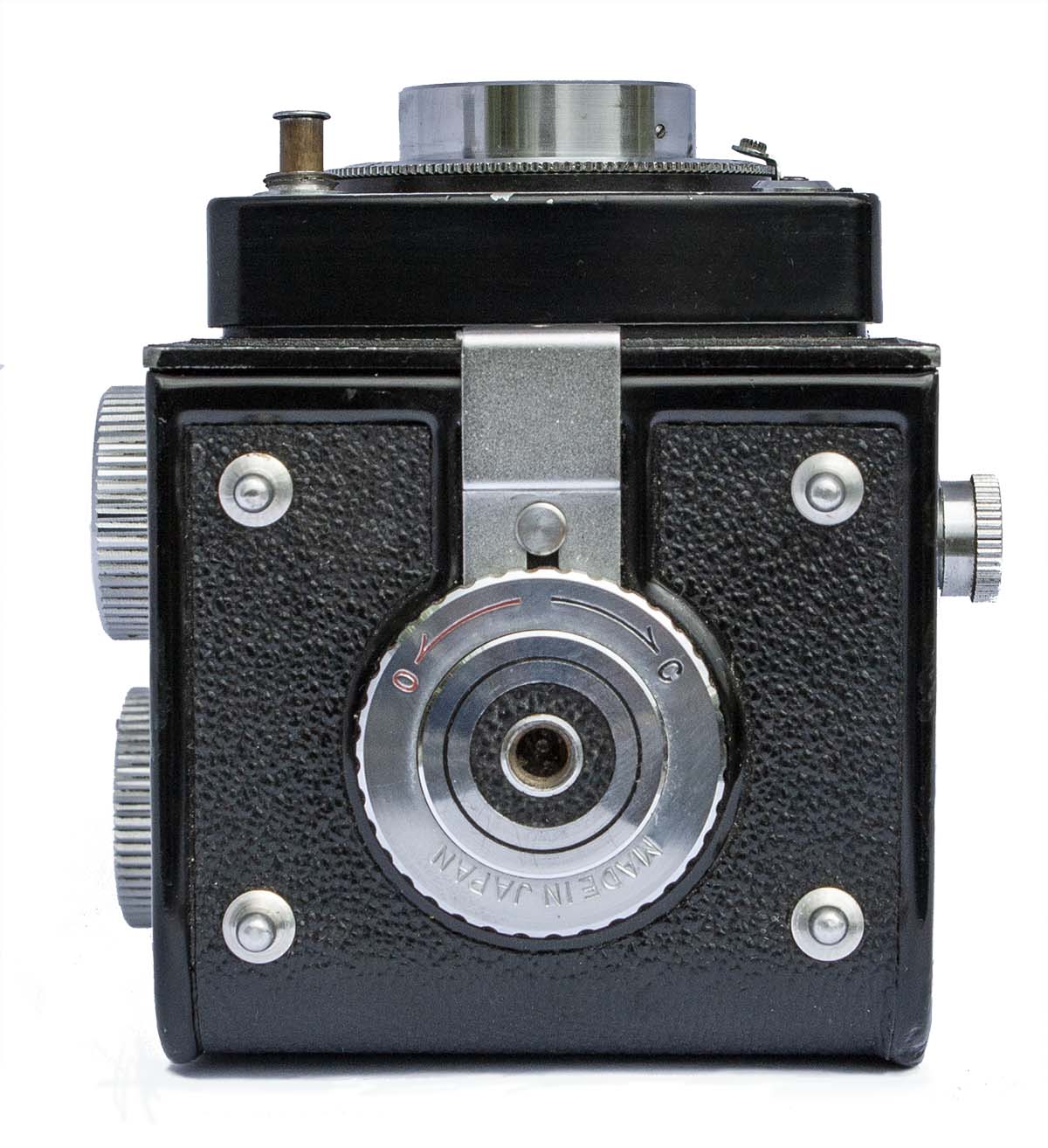 The large dial on the bottom is turned to open the camera to load film.

On that first role of film was my new girlfriend Nora, later to be my wife, who put up with my hobby for years. She must have hated my picture taking, but she never complained

This was a great camera for a beginner. I bought books and read everything I could. Kodak had a great little series on all aspects of photography. I read the magazine Popular Photography. I even signed up for a mail order photo course with the New York Institute of Photography. The lessons came monthly and you sent in home work to be marked. I stuck with that for a while but eventually I had to go off to college and a lot of that sort of thing had to be packed away. But that is another story.

I don’t know what happened to that camera. I asked my dad about it a few years ago and he couldn’t remember either. We looked for it when he passed away but it was nowhere to be found.

In those early days, in my final years of high school,  I was trying my wings at interesting photography and that camera was able to produce fine images.  It was a simple camera but all of the basic controls were there and with a little effort, it was capable of fine work. 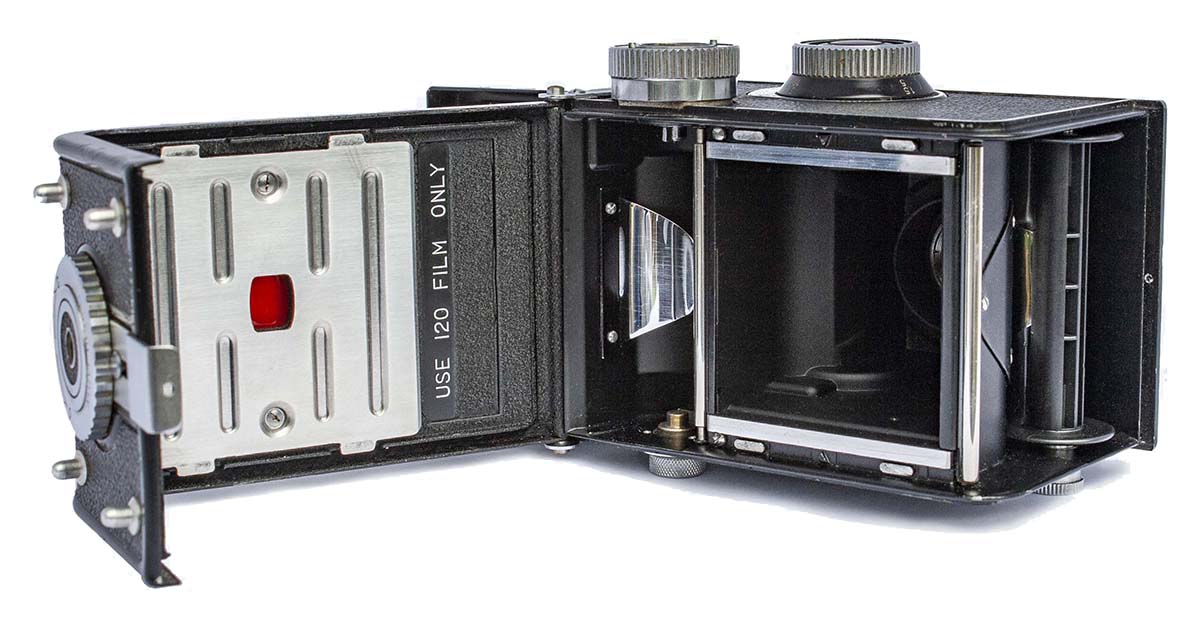 Inside the camera is straightforward for a twin lens reflex. No surprises here.

I was at a camera show a few days ago and found the camera you see in these photographs. It was dented, the paint chipped and even a part missing. However, the optics were clear, dirty but clear, and the shutter and iris seemed to work well. After appropriate bargaining, it was mine. As you can see, it cleaned up real well.

The Yashica Model “A” used 120 film giving a 6 cm by 6 cm image. There was no light meter and so no battery. It is a purely mechanical camera. These cameras were finished in black leather with a few available in a cream color with brown finish on the metal. There is no hot shoe but a PC sync plug is on the front. Because the camera uses a leaf shutter the sync works at all shutter speeds.

Mine has the Yashikor lenses. When introduced this camera had Yashimar lenses but these were later replaced by the Yashikor lenses. The main lens is 80mm f/3.5. The f stops run from 3.5 to f/16 and the shutter runs from 1/25th to 1/300th. A very basic range of settings. 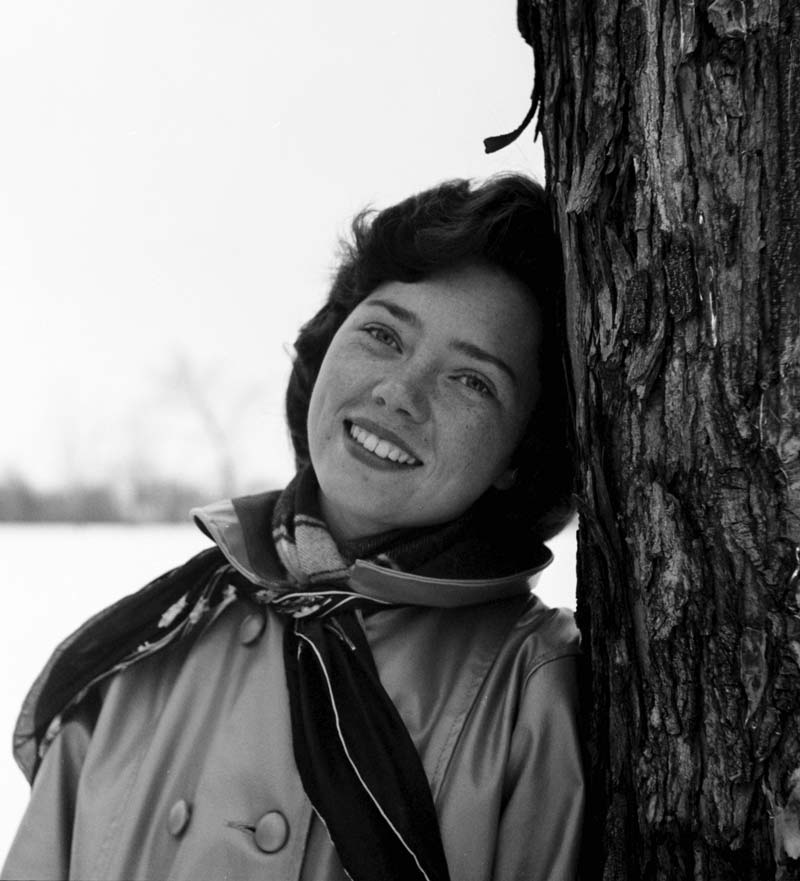 On the first roll of film that I developed was this image of my girlfriend, Nora, who was later to become my wife. It was taken on my Dad’s Yashica “A” around Christmas of 1959. 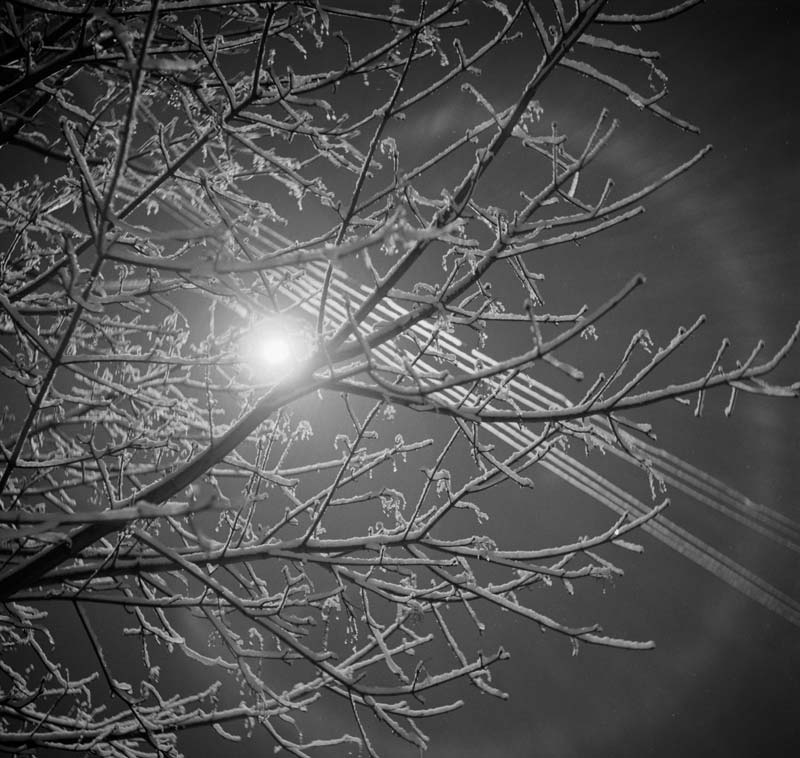 This image of a snow and ice storm outside our Toronto home shows the ability of the Yashica “A”  to take good photographs.

So what has all of this to do with photography and art? Well, not so much. Except …. the artist must learn his craft and how he does this can be instructive. Before you can paint a great picture you have to learn how to use a paint brush. Those early days when I had to learn about aperture and shutter speed and how to measure light in a scene have given me an instinctive feel for my cameras. I can judge exposure without a meter with pretty good accuracy. I know where I want my focus point and how much depth of field I want and what aperture will give it to me. And after taking tens of thousands of images and then looking at them critically, I know what pictures will please and what will disappoint.

Where all of this intersects with art is in experience. Anyone with a modern camera can take a beautiful picture … once. But day in and day out are their pictures above average, do people comment an their beauty, are they acknowledged as superior photographers? Do they regularly create artistic images? Well, that depends on experience and the ability to use a paint brush! And this is how you learn.

And how good is it? 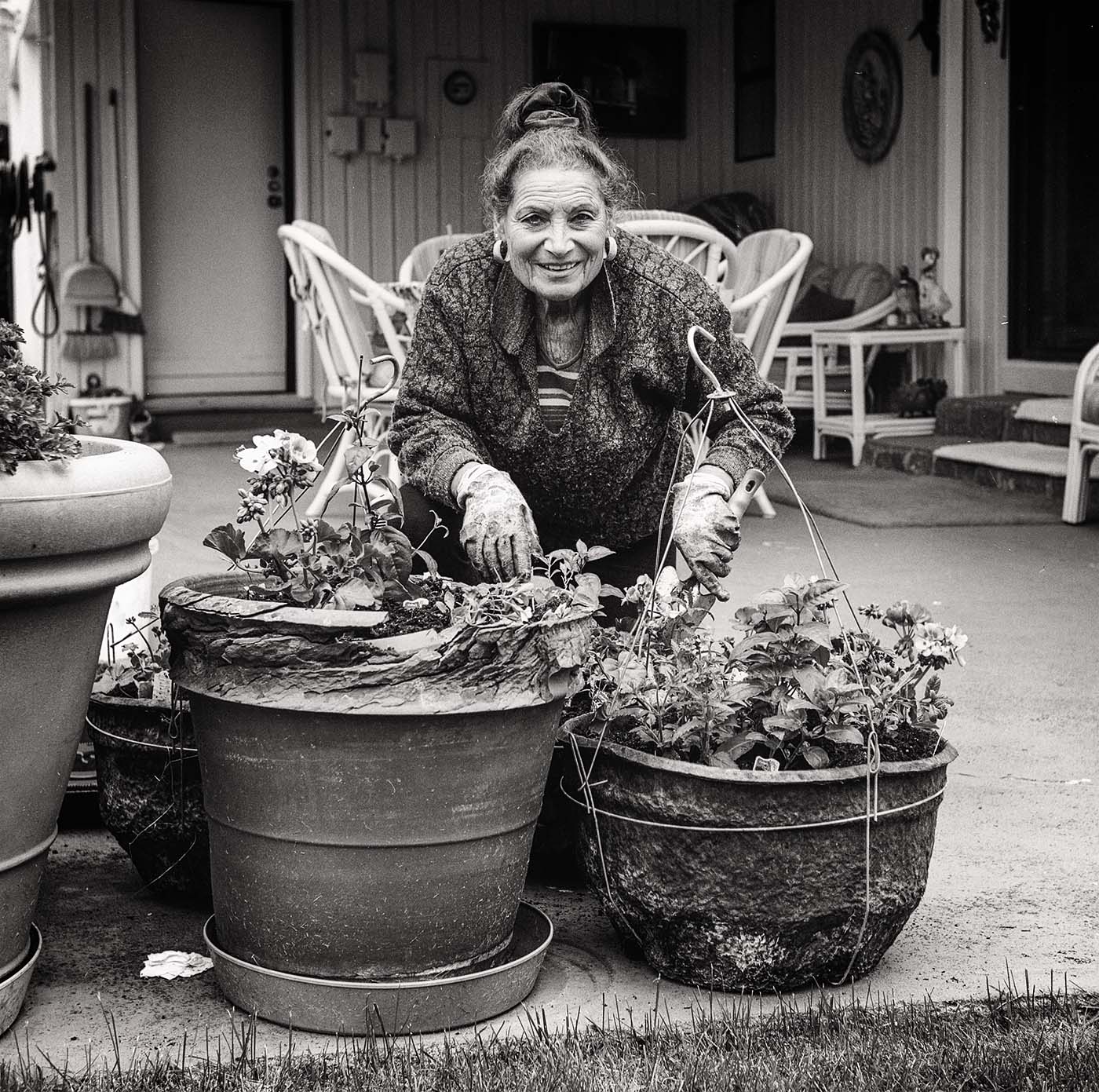 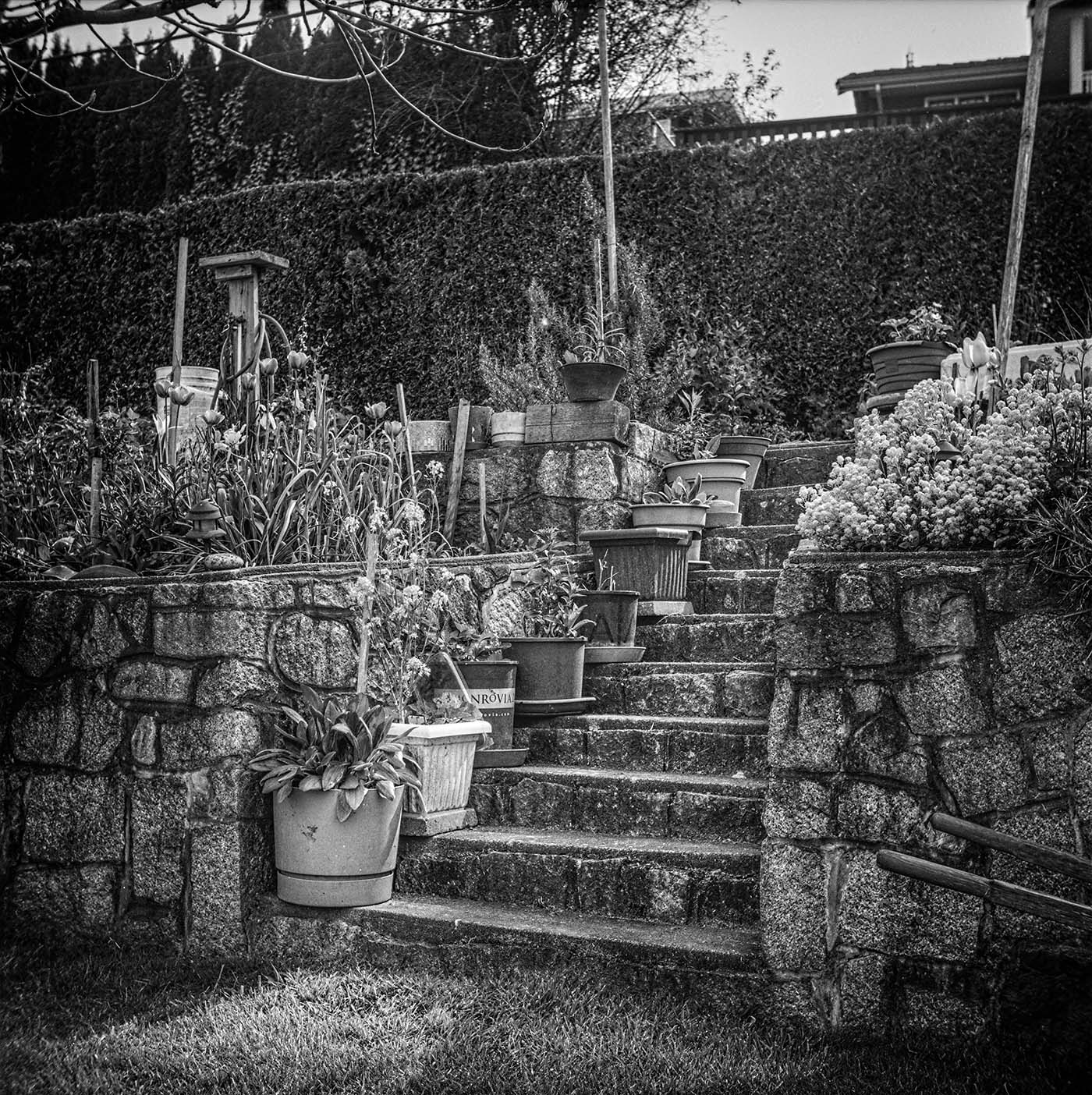 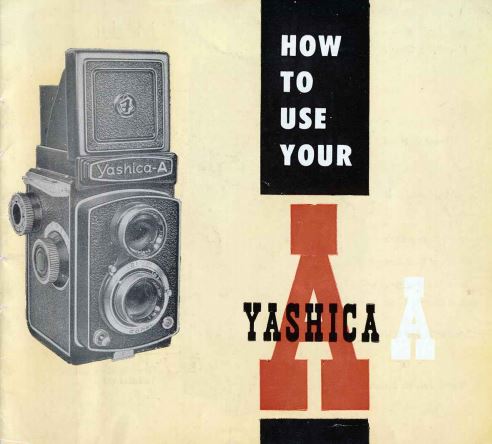 I remember feeling that my Dad’s Yashica was a great camera. Of course, up to then my point of reference was a Brownie Hawkeye. So I was anxious to see if my new Model “A” was as good as I remembered. I loaded it with Ilford Delta 100 and shot a dozen images around the house. I made a mistake and exposed half the roll incorrectly which gave me six images badly over exposed.  I guess I am a true amateur at heart!

This error did serve to remind me that, with film, over exposed images are not sharp images. Too much light splashes around inside the film hiding sharp edges and fine detail.

From these three images you can see that this camera takes a fine picture. 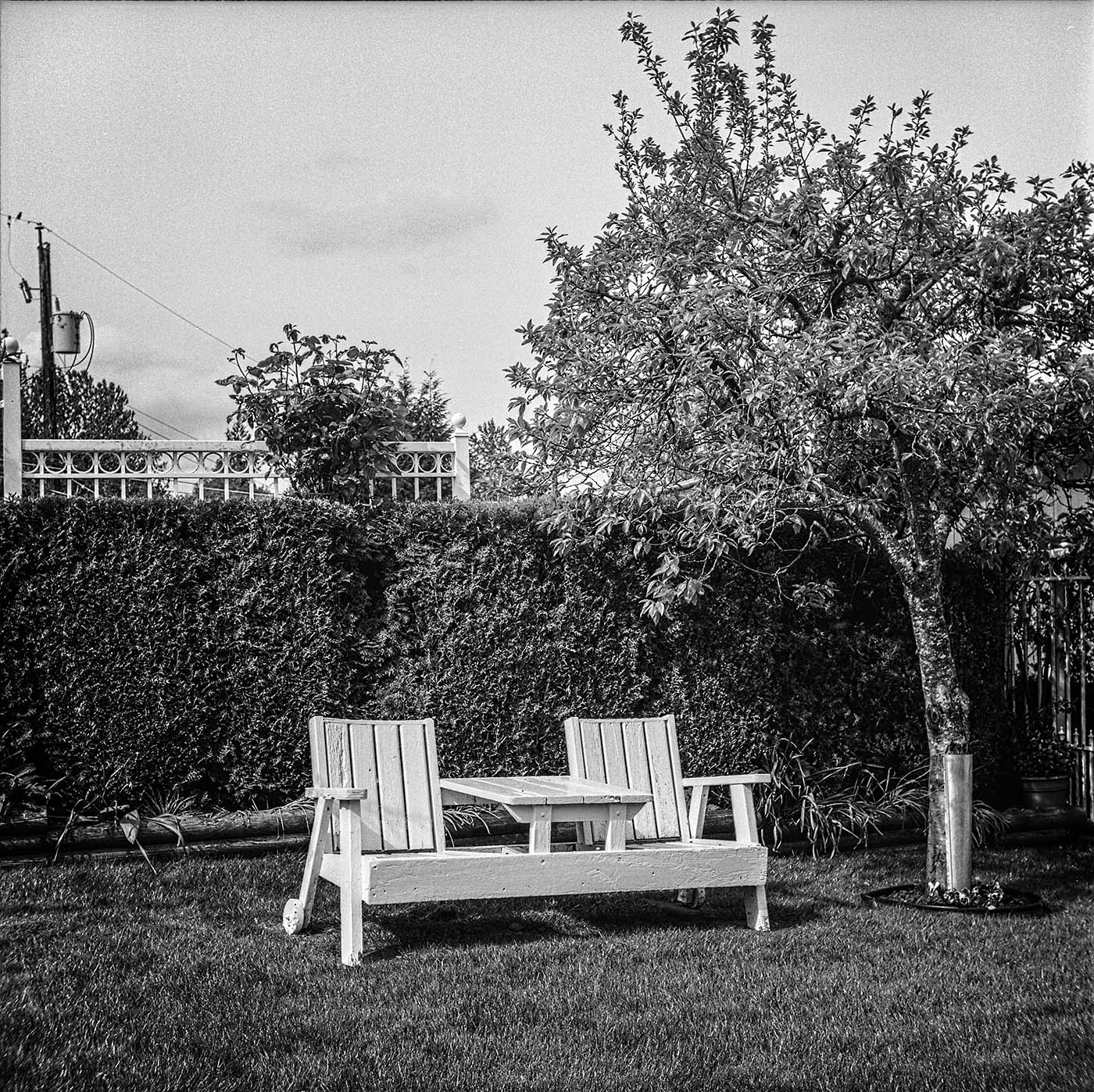 There is reasonable sharpness across the frame enough to give respectable enlarged prints .  All in all, my new Yashica Model “A” is a great shooter!

Now, for completeness, here is the user manual for this camera. By the standards of a modern DSLR’s bloated volume, this is pretty thin gruel. For an experienced camera user, the manual is unnecessary.

This is a pretty simple camera. However, I think of my father with his new camera and the manual would have been invaluable to him. He did not know cameras and to him this was a wonderful complex machine. So have a look at it and you decide.