But is it Photography?

So here is the question this week: is it photography? Well, maybe I should back up a bit. This past week I received an e-mail ad for a new Topaz plugin called Impression. The blurb said that it could turn photographs into art. Well, I am skeptical of these claims. Like the vibrance and saturation sliders, these programs that want to turn photographs into art usually disappoint and when they are used, they are way over used. And anyway, these programs seem to start with the premise that your image is not art and is sorely in need of help. That bothers me.

On the other hand, and yes, there is an other hand, the blurb offered me a 30 day free trial. So, why not. I was pessimistic and less than open minded. But I decided to give it a cursory once over. The program downloaded and installed without a problem and was immediately available in Photoshop as a plug in. That was neat. I like software that installs easily and integrates seamlessly.

Then I had to choose an image to play with. I was not intending to spend much time on this so I chose an image that I had recently been working on. It was from my “100 Images of Italy 2014” project which I had called “Geraniums”. There was no other criteria than it was close by. 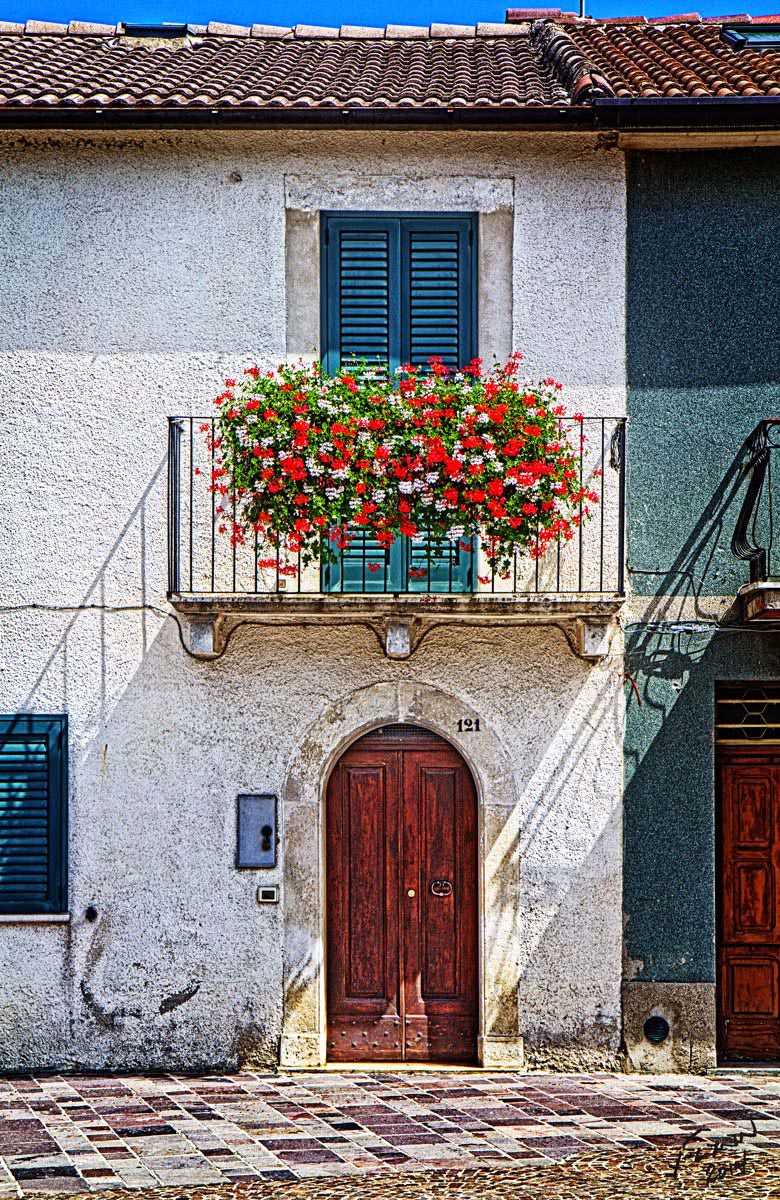 This is the original Image I called “Geraniums”.

I was never really happy with this image. It did not project the feeling I had when I was standing before this lovely home on that warm Italian afternoon. I remember the fragrant air and the brilliant colors and probably the pasta I had for lunch. But all of that was not to be found in this image. I posted it in my “100 Images” collection but I knew there must be a way to do better. It has always been my intention to revisit this image. I like the composition and the subject. It is the post processing that needed work.

So, I loaded the processed image, on the right above, into Photoshop and then called up the Topaz Impression plugin. I must admit I was caught off guard by what happened next. The plugin opened up much the way my OnOne modules do with the image displayed but one of the program’s presets was applied to it. It was a charcoal drawing preset and it looked pretty good. In fact it was excellent. It is here just below on the left. I had not expected to be impressed right out of the box.

There are dozens of presets and I played with them for an hour or more being totally charmed by this software. Not everything suited this picture but there were a few presets that were right on! I think that this plugin will not work with every image or even most images. But that is for later exploration.

Of course, the presets are simply suggestions to get your creative juices flowing. And each one allows you to jump in and begin moving sliders around. However, to be honest, I have not had time to dig into that feature yet. Nor have I tried other images. But let’s look at some of my results on this image and talk about them.

These are just four of dozens of presets. Some work well and others not so much. But I suspect from my experience with presets in other programs that what works depends on the nature of the image. Software such as this is not an end in itself: it is merely a tool, a paint brush in a jar of dozens of paint brushes, to be used when it seems appropriate.

There are some interesting possibilities here. For an instance, the charcoal rendering on the bottom left is very pleasing. Here we layered a more painterly version behind the charcoal version and then let the red flowers show through. In other words, what if we did not give total control to the Impressions software but used it as a part of our process? We could come up with something like this.

I like it. But it does not give me the Italian sunshine and fragrant air that I want my viewers to see and, more importantly, feel. With every image we seek to project a different “feel” depending on what we saw before us when we took the picture, or what we conceive in our imaginations afterwards.

So we keep looking through the presets and we come up with one called “Turner”. Well, he is one of my favorite artists. I actually wrote about him in an earlier. Well, this one really ‘turned my crank’! Below is the result. This is a straight “preset” from the program without any tweaking. And it captures, for me at least, the feeling that I want to project. 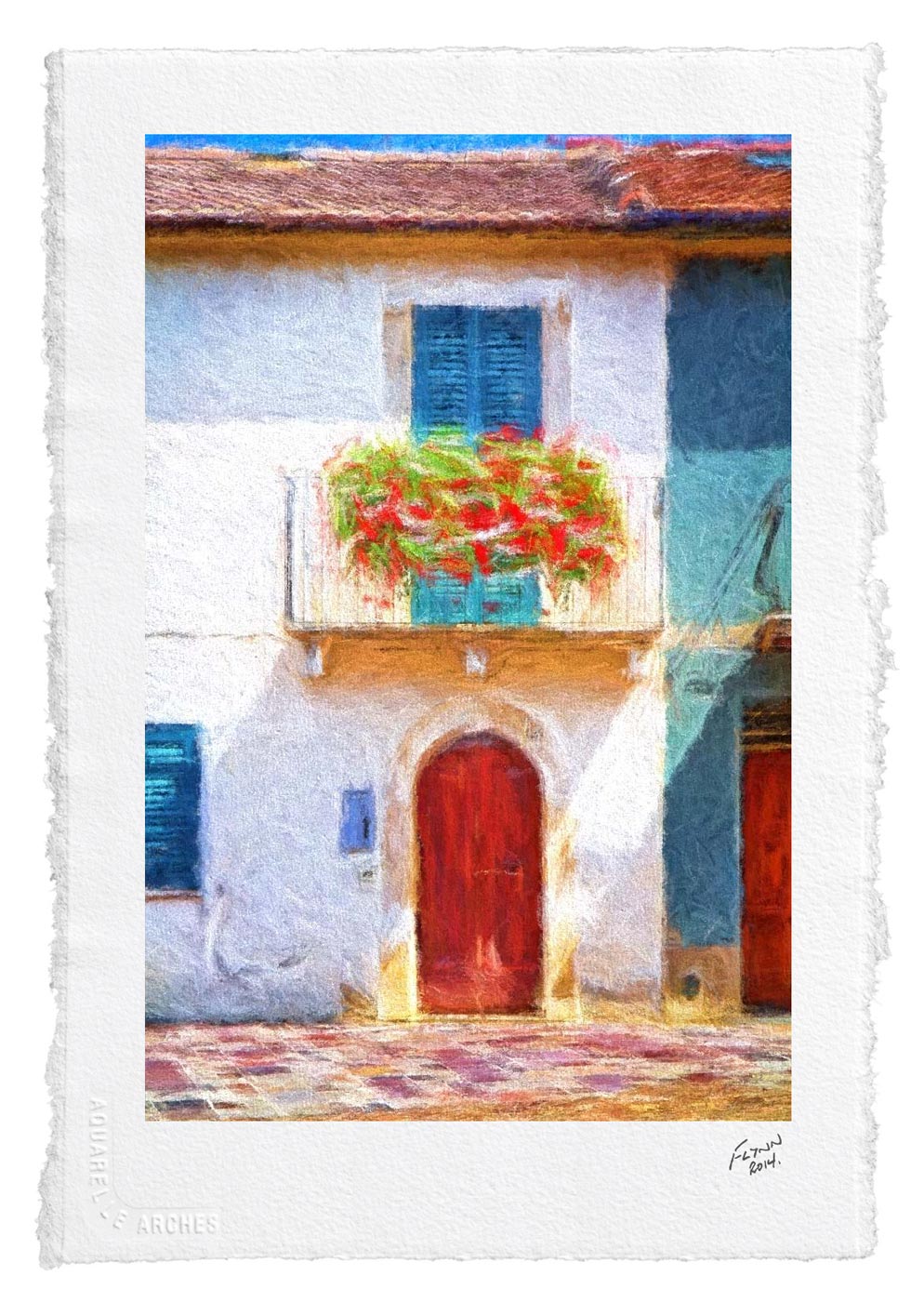 Now this I really like. There is my sunshine! In fact, I think I like it better than the original at the top of the page. I have yet to do a print and that will be the final test. Well, no actually, that will not be the final test. That will come when I present it to Susan and see if she will let me hang it in the house. I assure you that none of you want your work to face that test! I think I will also put this up on 500px and see how it ranks. Maybe even get some feedback.

But, to the issue: is it art? Is it even photography? At what point does post processing take you out of the realm of photography? The composition is mine. It was my camera that recorded it so we could sit here and discuss it. I set various parameters such as contrast, brightness, vignette, saturation, sharpness. But the Topaz programmers created the brushes and the overall effect. So how do we apportion credit for the work?

I have said many times in these pages that I am not much interested in f-stops and shutter speeds. Yes, I use them, but once the work is done they are irrelevant to the viewer. It is about the impact the piece has, not about how I did the work. So, maybe, I am looking at this from the wrong angle: instead of discussing the process I should be discussing the result: the impact the work has on the viewer. Which brings us back to the “living room test”: would I be proud to have this image on my living room wall? More critically, would Susan allow it?

Well, that answer may have to wait. I look forward to doing a print. I have not done that yet. I already get questions about my prints from non-photographers: what is it?; what process did you use?; is it an etching?; is it a water color? This image on a nice textured watercolor paper is bound to elicit even more such comments. It will not look like photography. But more than that, I think it will look wonderful. I can see it on a wall in a room with low light levels and a spot illuminating the print. I think it will just glow. More than the original image, this treatment captures the warmth of that sunny Italian day. And that alone gives it credibility.

My 30 day trial of Topaz\’s Impression has not expired yet. I still have three weeks in which to play with a few other images and make some prints. This program has caught me off guard and I am certainly going to explore it further. And I may find that I can’t be without it in my tool kit.