How to be a Better Photographer 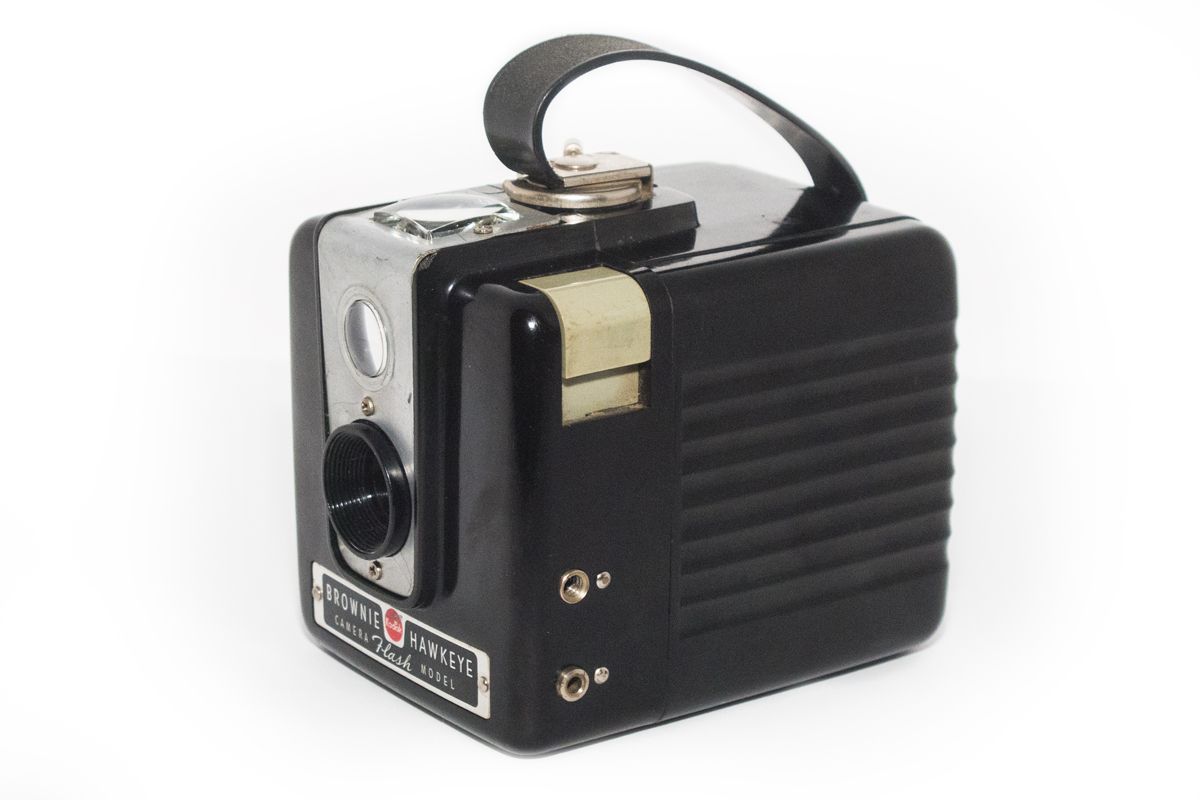 The Brownie Hawkeye is a simple box camera introduced by Kodak in 1949. It was fixed focus, fixed iris, fixed shutter speed. And it worked just fine. 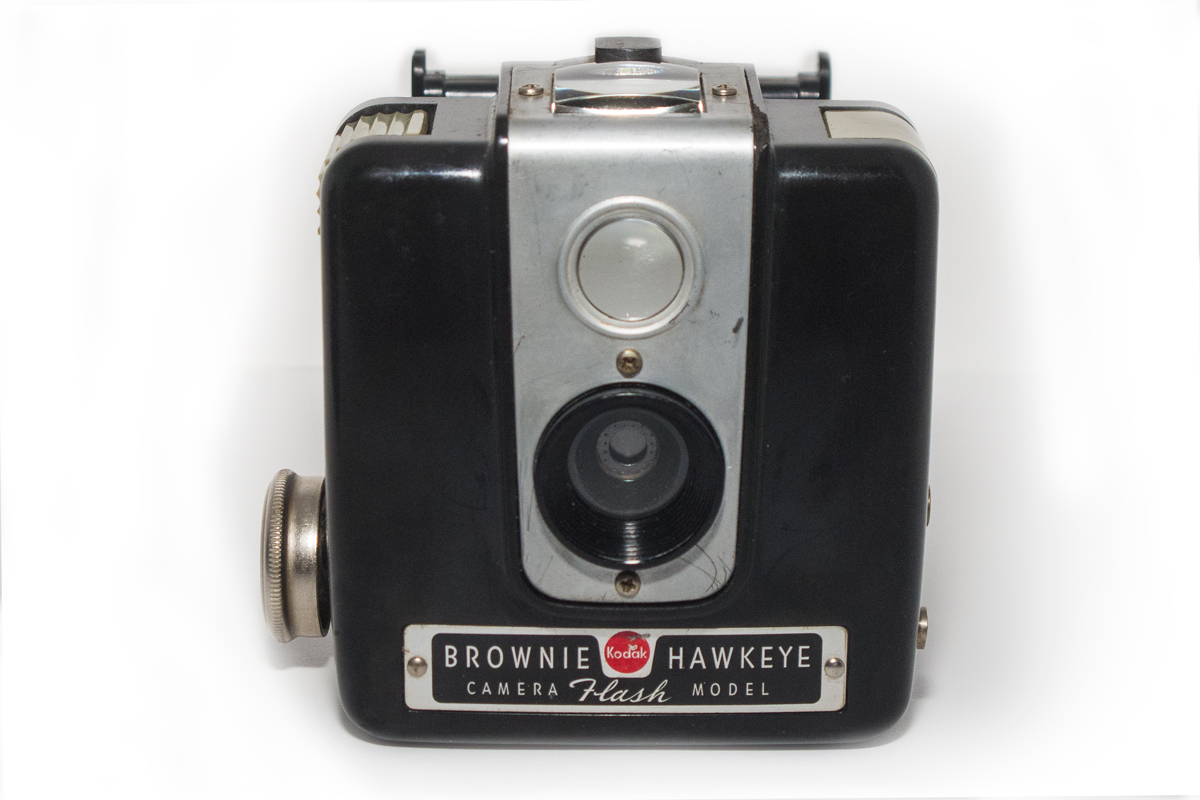 To aim the camera you looked into the viewfinder, the lens on top, and saw the scene through the top lens on the front. The bottom opening is the actual camera lens. You can see its fixed aperture. The lens is actually behind the shutter.

So you have decided to take better pictures, up your game so to speak, so you are looking for a new camera. Well, I can save you a lot of money. Go to the next camera show near you, or go on-line, and buy a Brownie Hawkeye. Should set you back about $10.00 at most. And learn to use it.

I can hear you now! “A Brownie what ….. ?” Everyone will tell you that you can’t take pictures with that. It is from the stone age. “Don’t waste your time” they will say. But they are wrong.

You see, good pictures are not in your camera; they are in you. The camera is simply your tool for painting with light. Painters use paint brushes. But some use their palette knife. Some throw their paint. Some use sponges. But the determining factor in which results are “art” is the concept in the mind of the photographer. It is not in the brush he uses.

Now, to the Brownie Hawkeye. It is the last and probably one of the best box cameras. First introduced by Kodak in 1949 it was in continuous production until 1961. Their original price was $5.50 and today they still command that or more. They are made of moulded bakelite and they take 620 film. (620 film is simply 120 film with a reel that has a smaller flange to fit in more compact cameras)

This camera is the height of simplicity. The negatives are 2 ¼ inches square. The lens is a simple meniscus affair and the shutter has only one speed. You get f/16 at 1/30th of a second. That’s it. You focus by putting your subject more than 8 feet away.

“But”, you say, “that won’t take better pictures than my Nikon whatever”. Well, if you can’t improve your photography with the Hawkeye, you are a lost cause. 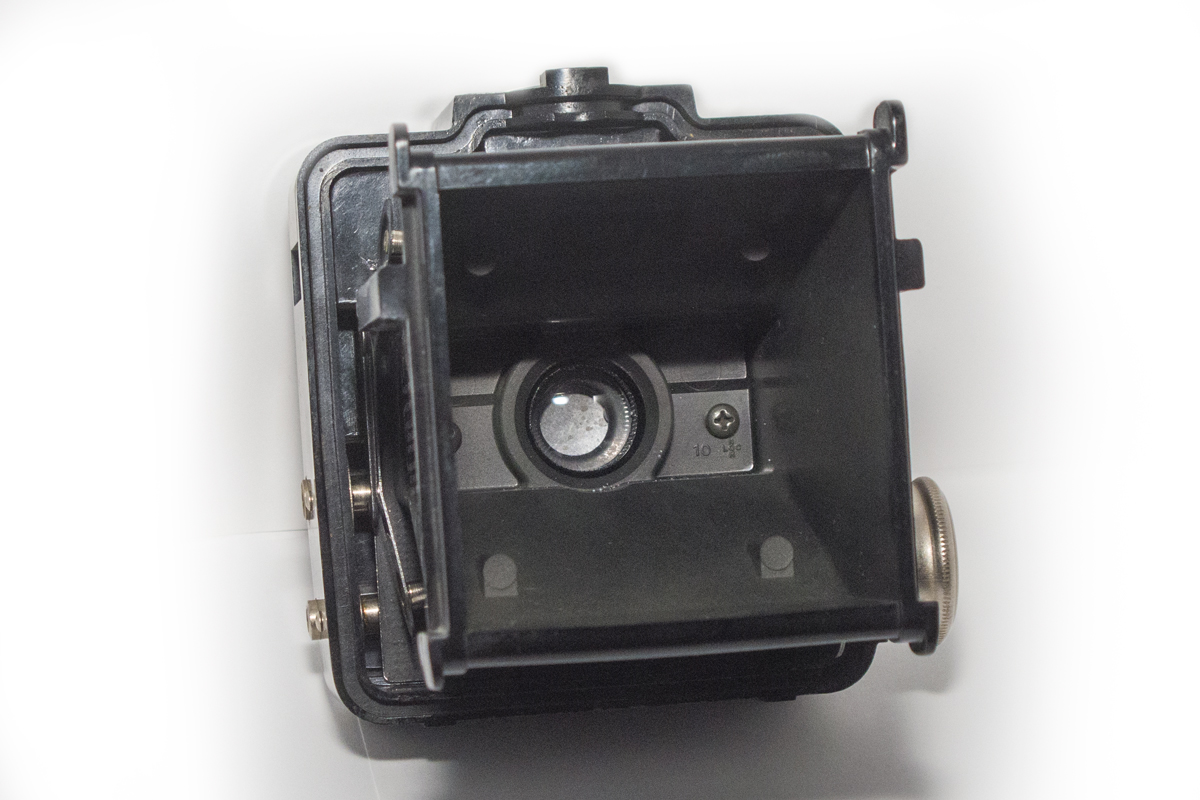 Inside the camera body is the simple lens which is fixed in place. There is no way to focus this camera. 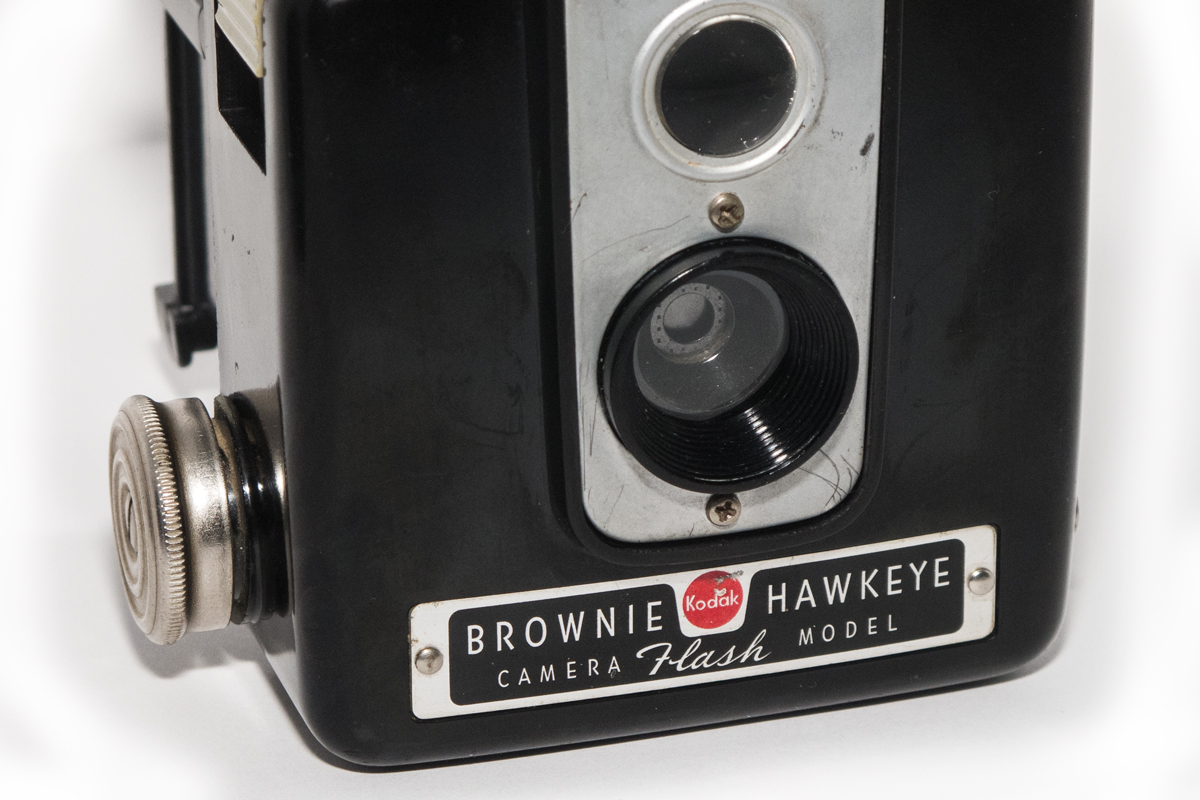 The lens on the outside is a flat piece of glass. Then the fixed aperture, the shutter blade and the actual lens is inside. 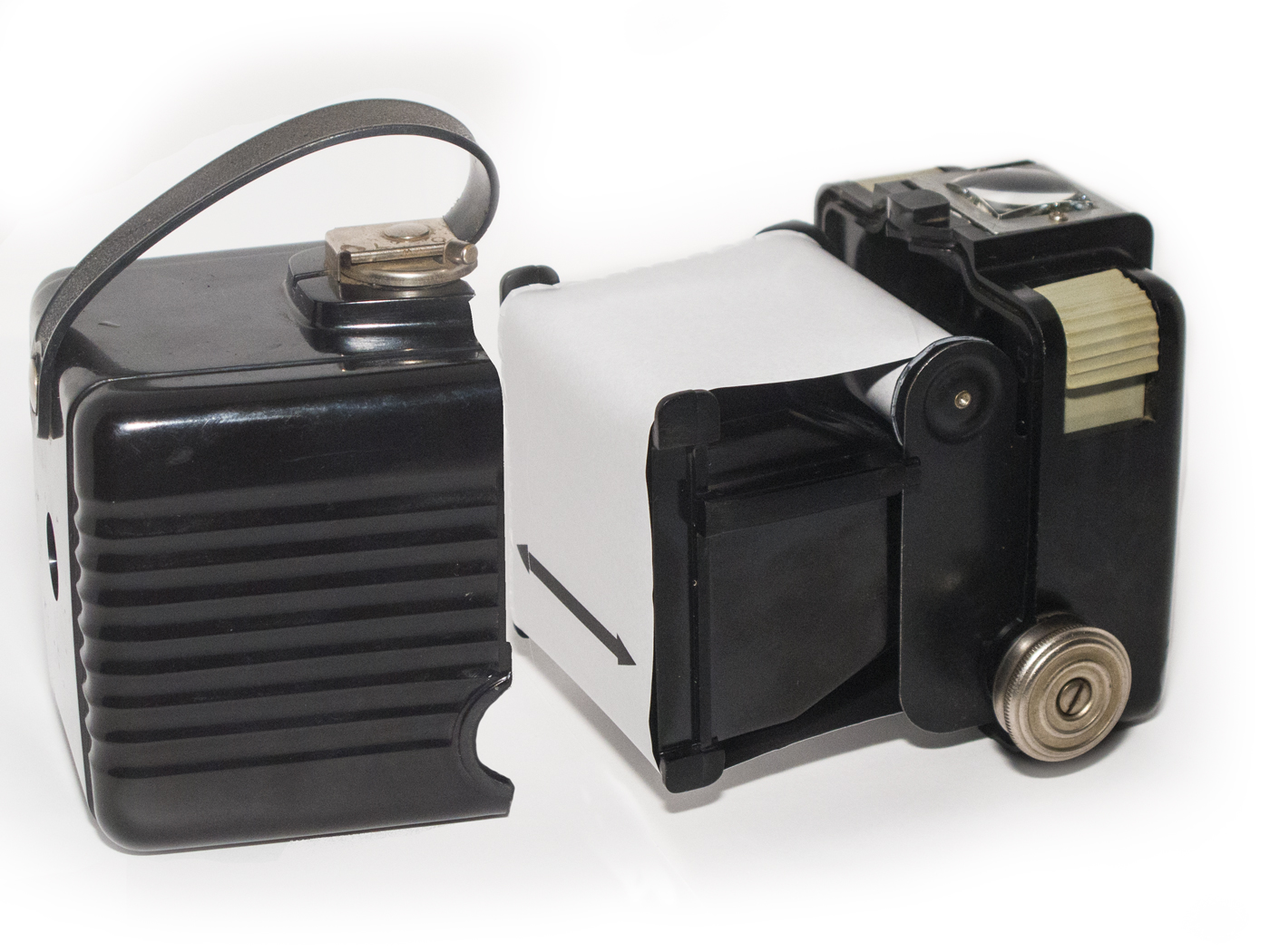 Here’s the deal: with the Hawkeye you will have to pay attention to film speed, to the weather, to the direction of the sun, to the subject you are shooting. You will have to deal with the inherent weaknesses in this camera: the lack of sharpness, the slow shutter speed, the inability to set your aperture. But it can be done. And when you learn to take great pictures with this camera, it will liberate you and inspire you. Then you can go and buy the Super Duper Nikon Whatchecallit. Then you will know how to use it properly.

So how do we approach this. Well, you may recall that I have commented in these pages that the sharpness of modern lenses can be a problem if you are trying to take a painterly picture. Sometimes you want to be able to blur your edges. Well, if you get that urge, then this is the camera for you. Softness is its name! 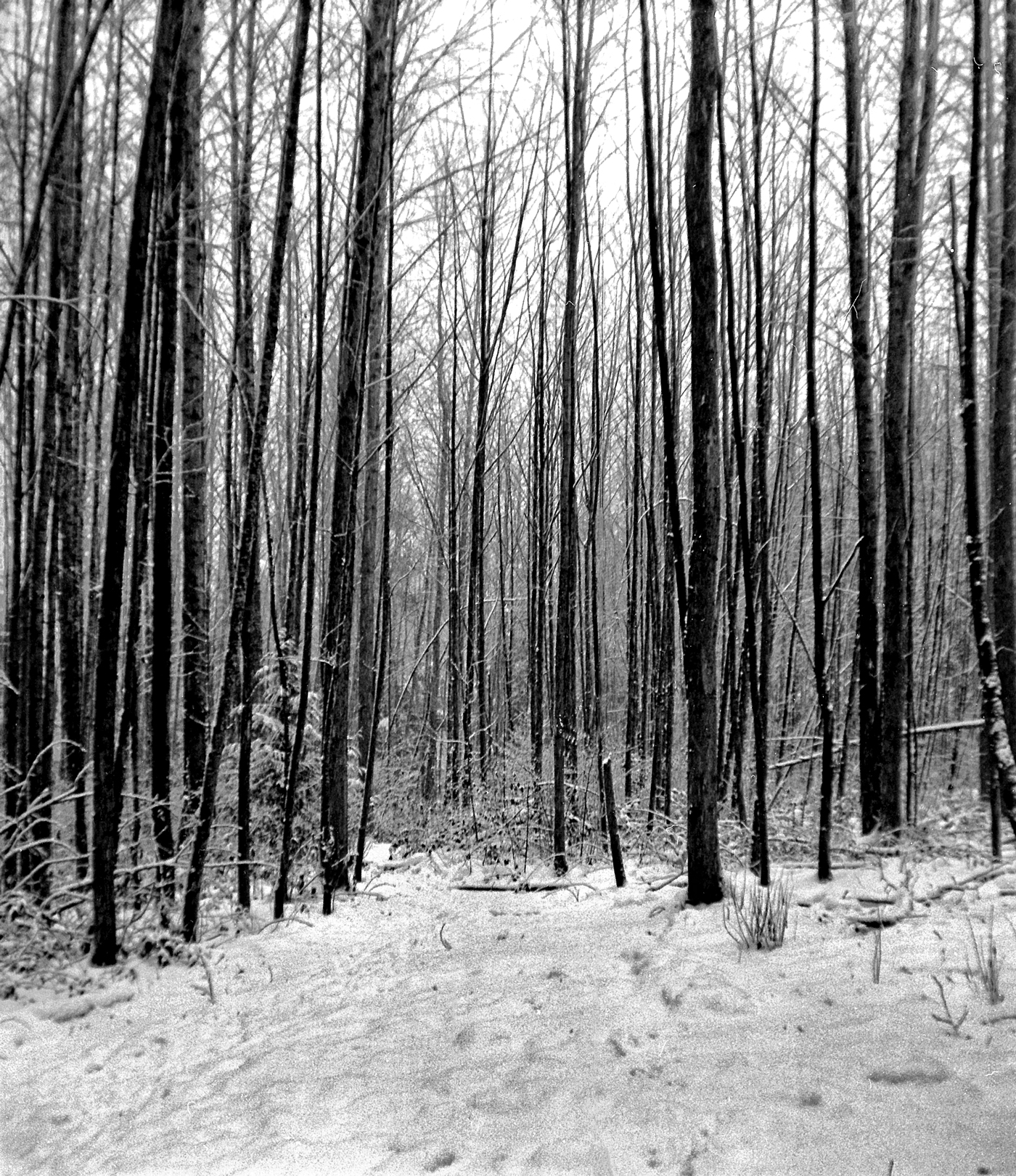 “A snowy day in the Woods”
You can see that this little camera can take a decent picture. The image is not really sharp but in some situations that would be a good thing! 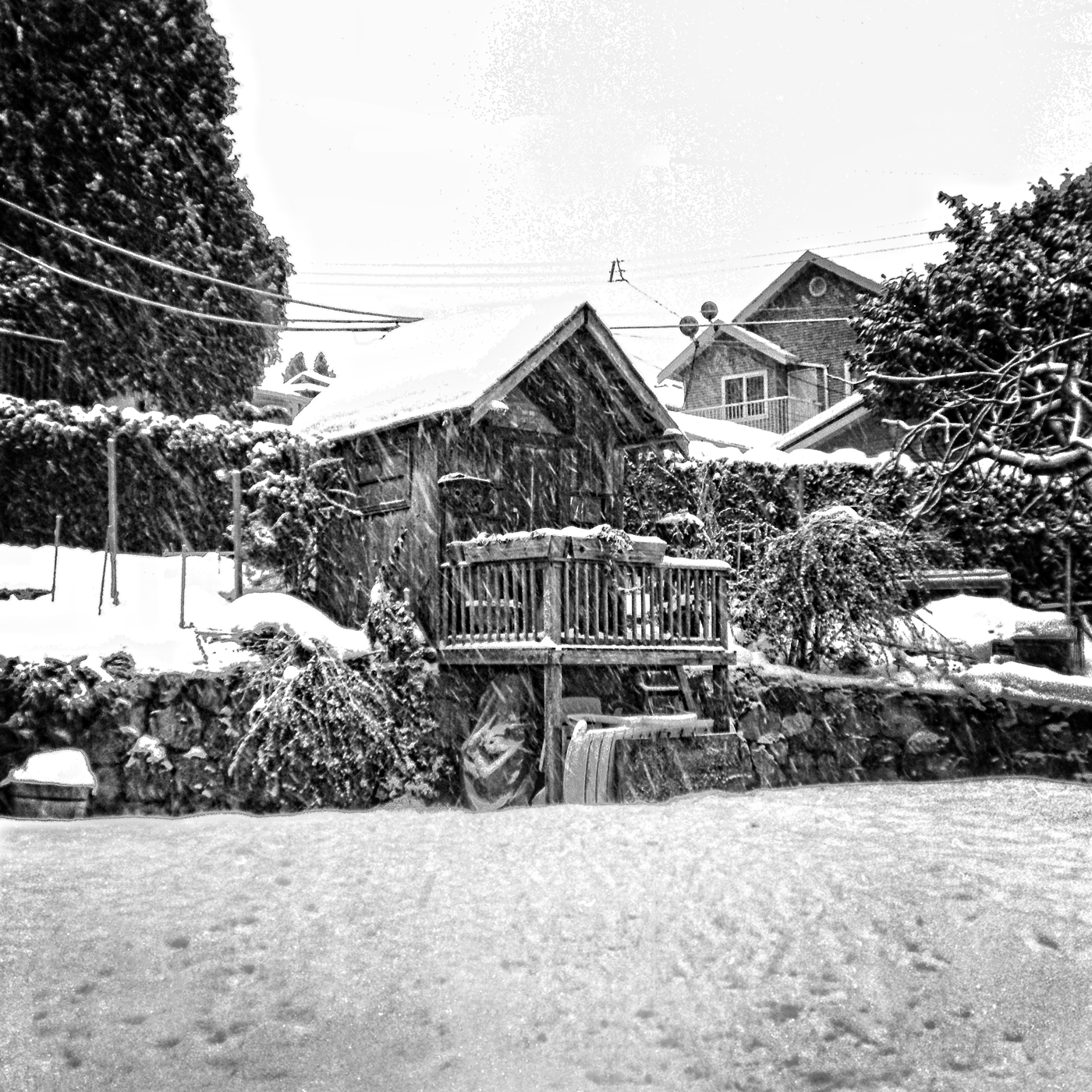 “Garden Toolshed in Winter”
It was snowing in the backyard when I took this. The film gave a low contrast image. Once developed I scanned the images so I could proceed digitally.  I processed the picture in the HDR module of the OnOne Photo 10 suite to bring out the contrast and still keep a tonal range. I could have spent more time working these images but they were not worth hours of work. And I was in a hurry to write this piece and show my pictures to you. 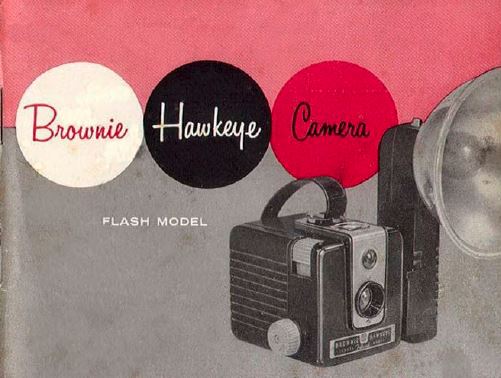 If you can figure out how to get good exposures, then you will have understood light. With only one f stop and one shutter speed you have to manipulate your film speed and the natural light conditions you find. You need brightness but sun light creates horrible shadows. So what do you do? You figure it out and in the process you become a better photographer.

It is through challenging yourself, researching, reading, learning and practice that you will improve you photographs. You can’t do it by buying a better camera.

Enough with the lecture. I have a Brownie Hawkeye and I was anxious to try it out. I bought a roll of film. But it is mid winter right now and it was snowing. Undeterred I went out and shot my twelve exposures. I was not after art. I wanted to use the camera.

The film was ISO 125 and my light meter … yes, use your light meter … said that the light was right for that speed at 1/30th at f/16. It was cloudy bright but with snow on the ground there was lots of light bouncing around.

Can this simple little camera take a decent picture? Well, you tell me. Here are three of the pictures out of a roll of twelve. I rushed this time. When spring comes and the weather is better, I am going to spend some serious time with this camera. 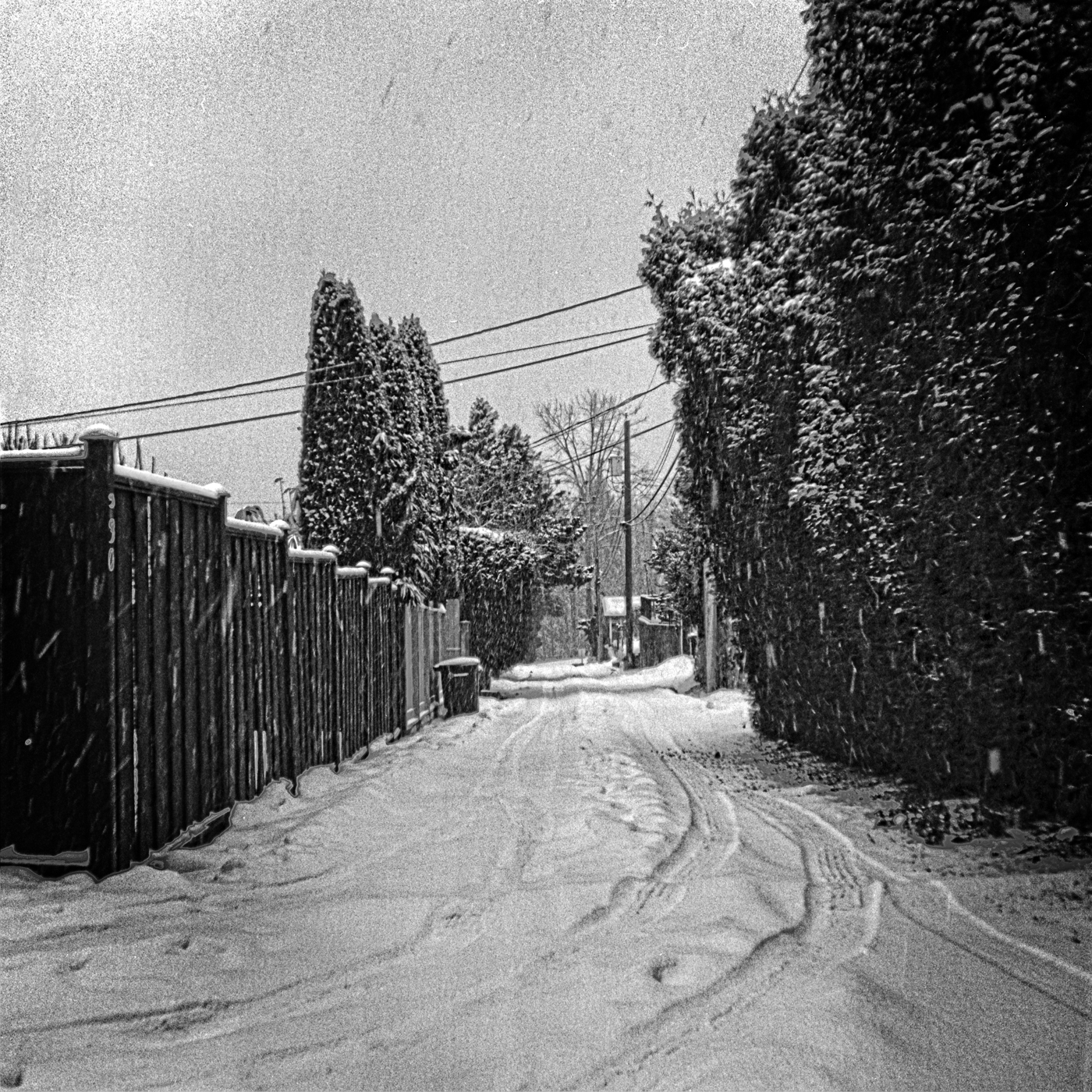 “Snow in the Lane”
Same day in the lane behind the house.

I have, perhaps, over simplified the road to good photography. But I am serious when I say there is much to learn in these old cameras. And, yes, 35mm and 120 film is still available and there are places that will develop it for you. So do it. It will be fun and you will learn a great deal.

Now, when you get your Brownie, it will probably not come with a manual. You can use mine. Just click on the image to the left. And enjoy!  Good luck!