Have you noticed how a scene will connect with something within you; you look at it and you don’t want to pull your eyes away; you photograph it and you keep returning to the image; your mind keeps going back to it. It is different images for each of us. We all see different things in various scenes. I think it must depend on our experiences and our emotional makeup. When you find such an image before you, you just have to take photo after photo of it, or paint it, or draw it, over and over. At least it works that way for me.

I love the gondolas of Venice. I have hundreds of images of them and every time I am in Venice I take more. Closer to home, there are the flowers in my wife’s garden. Every year she turns her little patch of soil into the most wondrous paradise. I spend hours out there with my camera immersed in the form and color of the blossoms. I intend to create a portfolio of those photos one day.

Another subject I have returned to several times is a wrecked fishing boat lying in the mud of the Fraser River beside River Road in Richmond. It has been abandoned to the mud and tide and is rapidly deteriorating. I have taken pictures of it several times over the past year and the advancing decay is apparent.

All of the images I have taken have several problems which I have tackled over the last few months. The first has been contrast. The interior of the boat seen through the ruined windows is dark while the exterior is very bright. That was eventually solved by the judicious use of HDR techniques.

It has always seemed to me that the decay and sense of destruction calls for a harsh treatment. For an instance, I think a grunge black and white treatment might go well with this subject. That is the great thing about modern photography: the range of interpretations possible is endless.

Part of my work flow is to have different versions of an image on view in my surroundings for several days. I look at them over time and as they become familiar I see them differently and find things I want to bring out, or suppress, before I invest the time and effort to print the final image.

Contrast apart, the background in the image is a problem. The river at this point is not wide and the far bank interferes with the image as I see it. 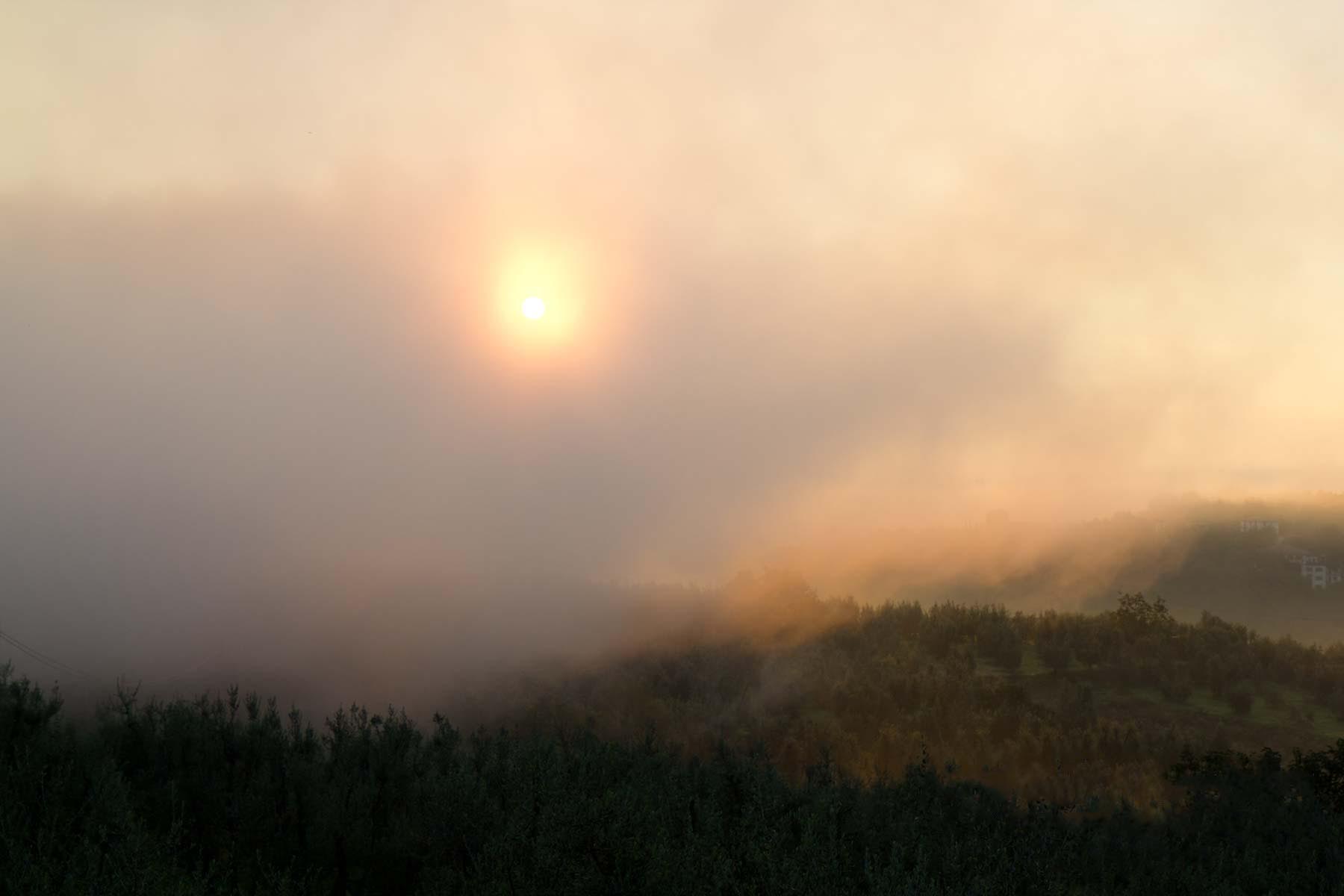 Jenn Williamson, an artist friend of mine, had mentioned another image she liked on my website. This was “Olives in the Mist”, a picture I took in Tuscany in 2012. That got me thinking about using the sky and mist from that image as the background here. I threw together a low resolution test of the idea. It did appear feasible. Now, the methods used to blend two images together in Photoshop are varied and they can be quite complex if you want a seamless integration, which I did. The process involved crating one layer with just the water on it, one with just the boat and one with just the mist and then combining them.

An immediate problem was the color: the mist image was in tones of brown and orange; the water was predominantly blue in tone. I reduced the color saturation in the water and moved the color balance to the red end of the spectrum. By itself this is an unrealistic rendering but it fit with the sky very well.

On the boat itself, however, I did not change the saturation or color balance so that it stood out from the muted background. And when I combined them together, painting, blending and erasing as I went, the result looked like this.
This is the result of blending the three individual layers I created from these two images. Actually, there is a third image used for a touch of blue sky in the upper right corner.

I have enjoyed this little project because it takes a step beyond photography and uses the camera and printer more as paint brushes to apply color to canvas. The image of this boat stuck in the river bank slowly disintegrating created feelings for me that went beyond a mere photograph. Post processing allowed me weave several techniques together to actually project how the real life scene impacted me.

As for the title of this post, it is from a poem by Longfellow about the United States: “Thou, too, sail on, O Ship of State! Sail on, O Union, strong and great! Humanity with all its fears, With all the hopes of future years, Is hanging breathless on thy fate!” In my mind, the way the world is trending, this image may become an apt metaphor for the present state of the “Ship of State”.