A Walk with the Canon Pellix

Taking out my old cameras , like my Canon Pellix, for a photo walk has become a bit of a surprise. I thought I was just going to take a walk down memory lane and reconnect with my days of picture taking in the 50’s and 60’s. But it is fast becoming much more than that. 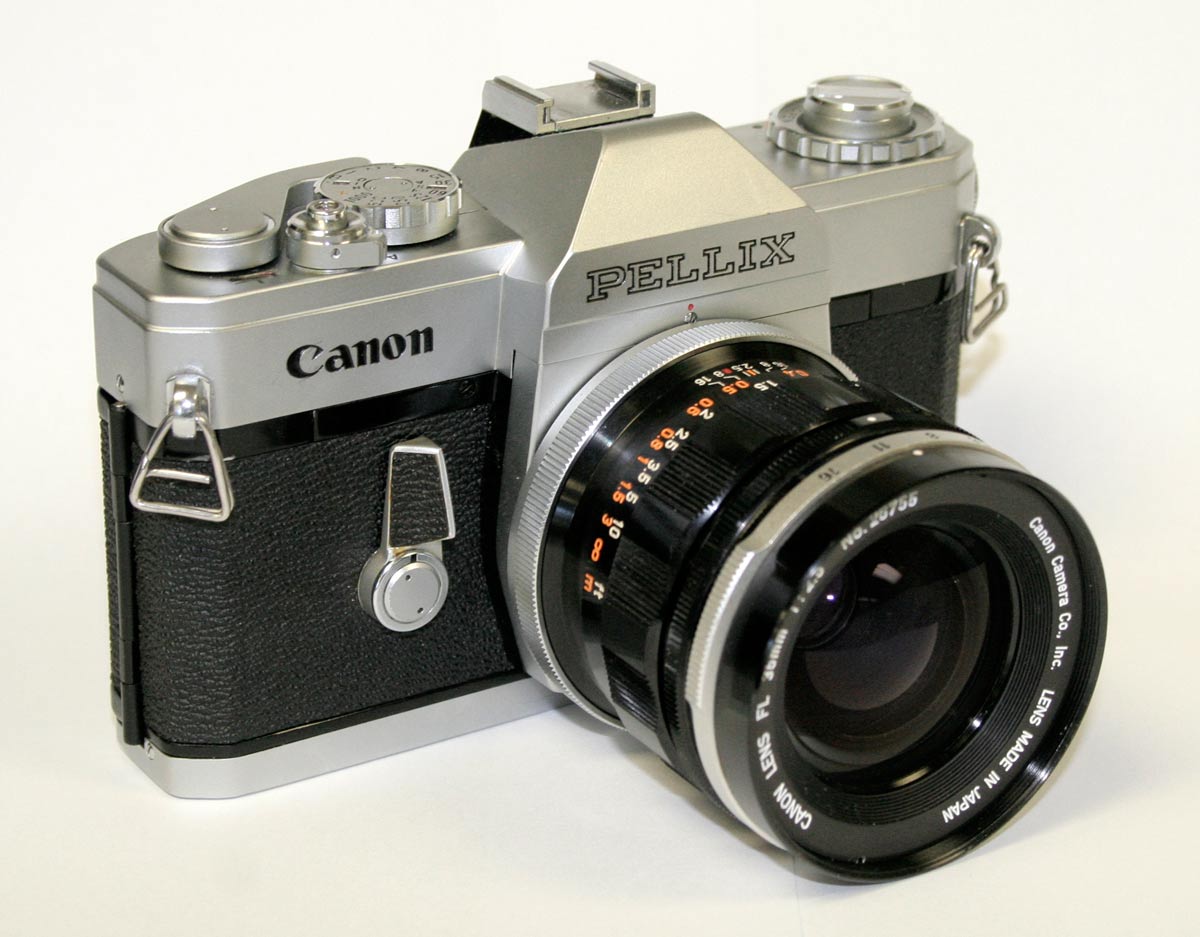 The Pellix is an F Series camera and it has the heft and feel of an FT or any of the others in the series. Being an early member of this group of cameras it takes an FL series lens and FD lenses should be avoided. This camera is prone to damage if the wrong lens is mounted.

The modern digital camera is a wonderful instrument but in a way it isolates us from the photography we want to pursue. These cameras do the picture taking and we just become stand ins for the tripod!

Using the old cameras without all the fancy automatic features forces one to think about f stops and fractions of a second and light levels and all the elements that go into a great photograph. Stuff that we don’t have to consider in our digital world. The old cameras get us back to thinking about light and how it will react with the film in the camera.

I am rediscovering picture taking. My thinking about this is far from done but I know I am loving it. My mind keeps going back cameras in a way it was not doing before these photo forays began.

This past July 21st I took out my Canon Pellix for a walk. This camera was an experiment with a fixed mirror and I wanted to see how it was to use. I paired the camera with an FL 50mm and FL 135mm lens and Ilford 400 Professional film. Again, I was not out to create art. I wanted to see what the camera could do and hone my rusty skills in the darkroom. 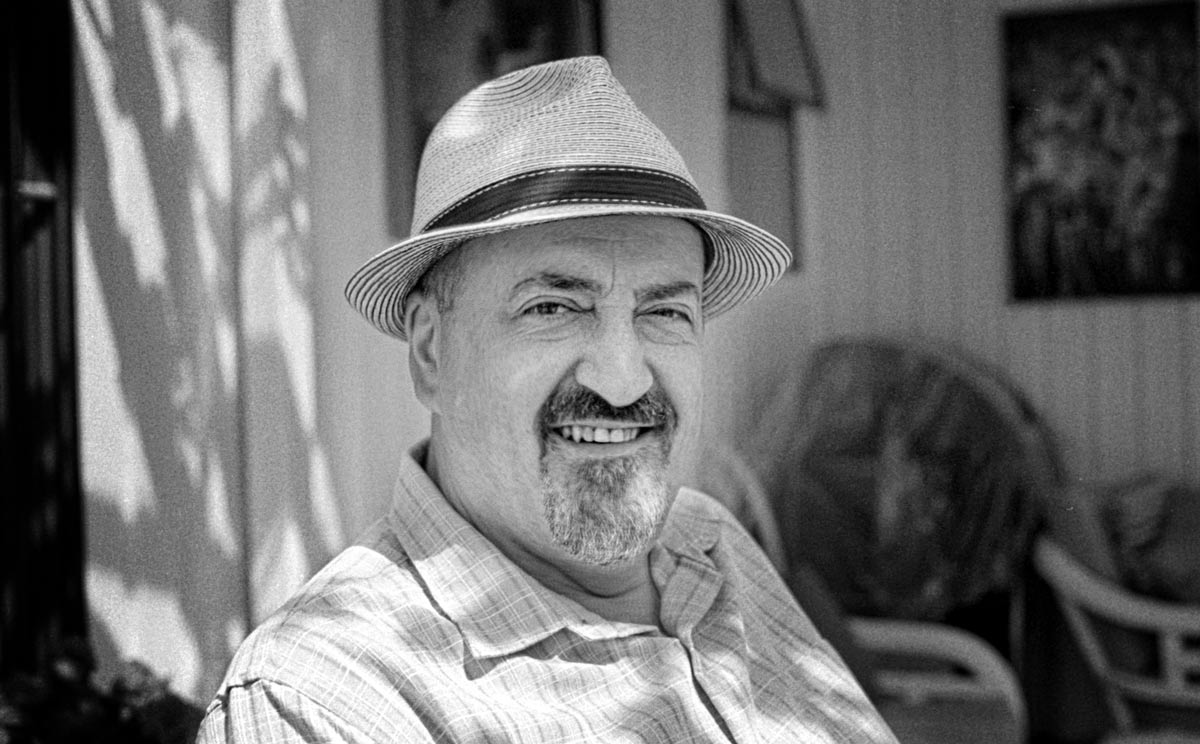 My son-in-law Joe served as my model here and you can see that this camera takes a nice image. I am not satisfied with my film developing yet but this was only my second roll since getting back into developing. I expect great things to come as I get better! 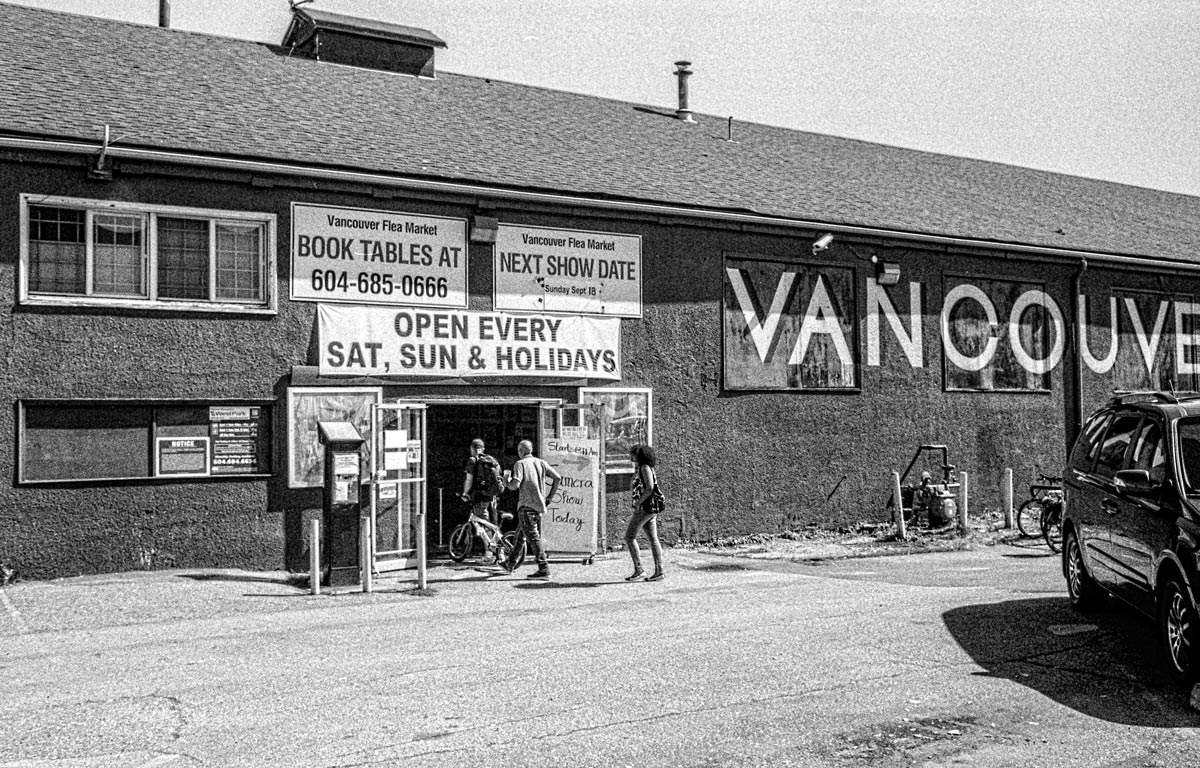 I went to a small camera show here in Vancouver with my Pellix, which attracted some considerable attention. The show was in this building and this image gives us a wealth of detail to examine. This camera delivers where it counts – on the film.

This camera requires an old EPX 625 mercury cell to operate the light meter but those are not available any longer so I used an Energizer 625G. The mercury cell is a fairly constant 1.35 volts which is why they were popular. The 625G is an alkaline battery that puts out 1.55 volts and they vary in voltage depending on the age and usage history of the cell. This batter was fairly new so it was probably over the nominal required voltage by about .2 volts or roughly 15%. Not enough to harm the electronics but certainly enough to throw off the exposure meter.

The first thing I noticed was that the light meter reading was exactly the same as that my 60D was giving me for the same ASA number. Interesting. Possibly the Pellix is not sensitive to voltage, presumably because it has a voltage regulating circuit on board. In any event, I took no steps to correct for the voltage.

The light metering is interesting. To take a reading you press the lever on the front right of the camera towards the lens. This stops down the lens and activates the meter needle which you then move by adjusting aperture and shutter until the needle rests over a small circle etched on the viewfinder glass. It was a little awkward because I don’t have enough hands but once I got the hang of it I was OK.

Setting the shutter was too awkward with the camera up to the eye so shutter must be set before the meter reading is taken. 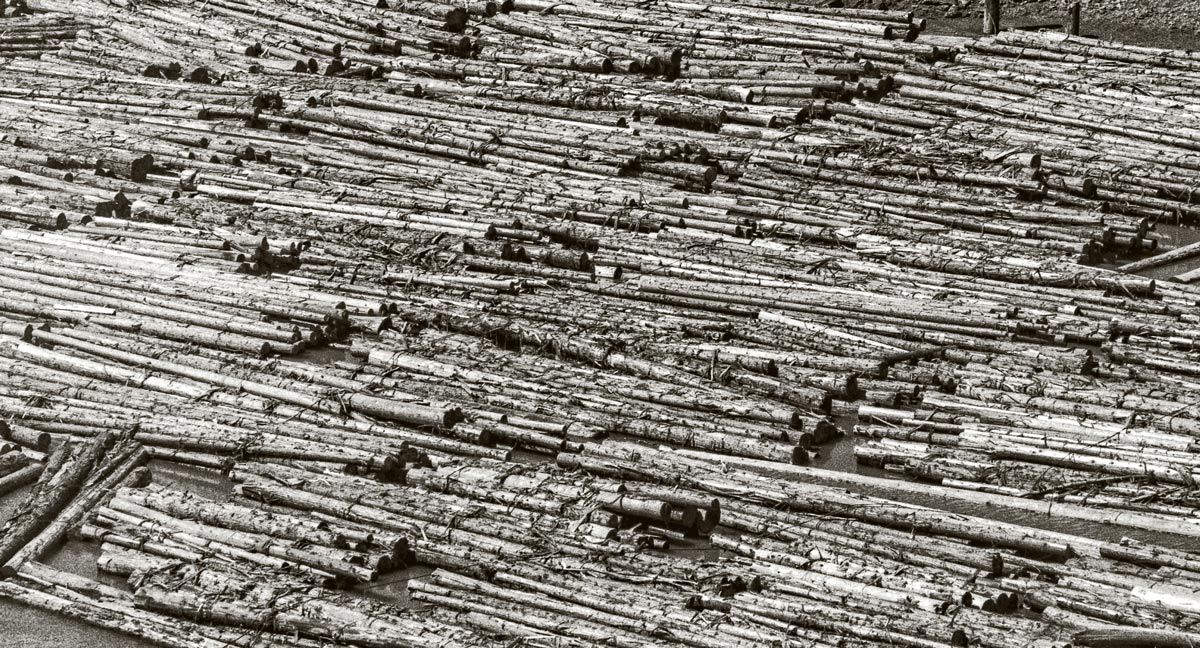 This log boom in the Fraser River under the Knight Street Bridge contains a wealth of detail. I would not call this art but it is an interesting study and it shows the potential of this camera.

Remembering to do everything was the problem. Set the shutter speed, view the subject and set correct aperture, and … oh yes … I forgot to wind the camera and to take the shutter button off safety … so we start over.

The shutter is not a two step release as with the 60D, XTi and many other Canon cameras. I found it to be a bit soft but if you push far enough the shutter finally releases. It is not quiet but you certainly don’t get the slap of the mirror as it jumps up out of the light path.

This camera is big and heavy like the others in the F Series and I really like the feel of it. I like the shutter button lock. I was always forgetting to wind the film. This meant that I would get all ready for the shot, focus, compose, breath slowly and …. The sutter is not wound. Take the camera from my eye, wind, and then start all over again. But, if you wind after every shot that does not happen. But you have to lock the shutter so you don’t shoot accidently.

So, 24 exposures later, I took the film home and later that night developed the film. Oops, a problem. The film was fogged in a repeating pattern. Hmmmm …..

The fog went from edge to edge so the problem was not with the shutter (which does not go edge to edge). It was not fogged in loading because the effect was there over the whole film from one end to the other. Light getting into the film canister would only fog the top two or three layers. So what could it be? 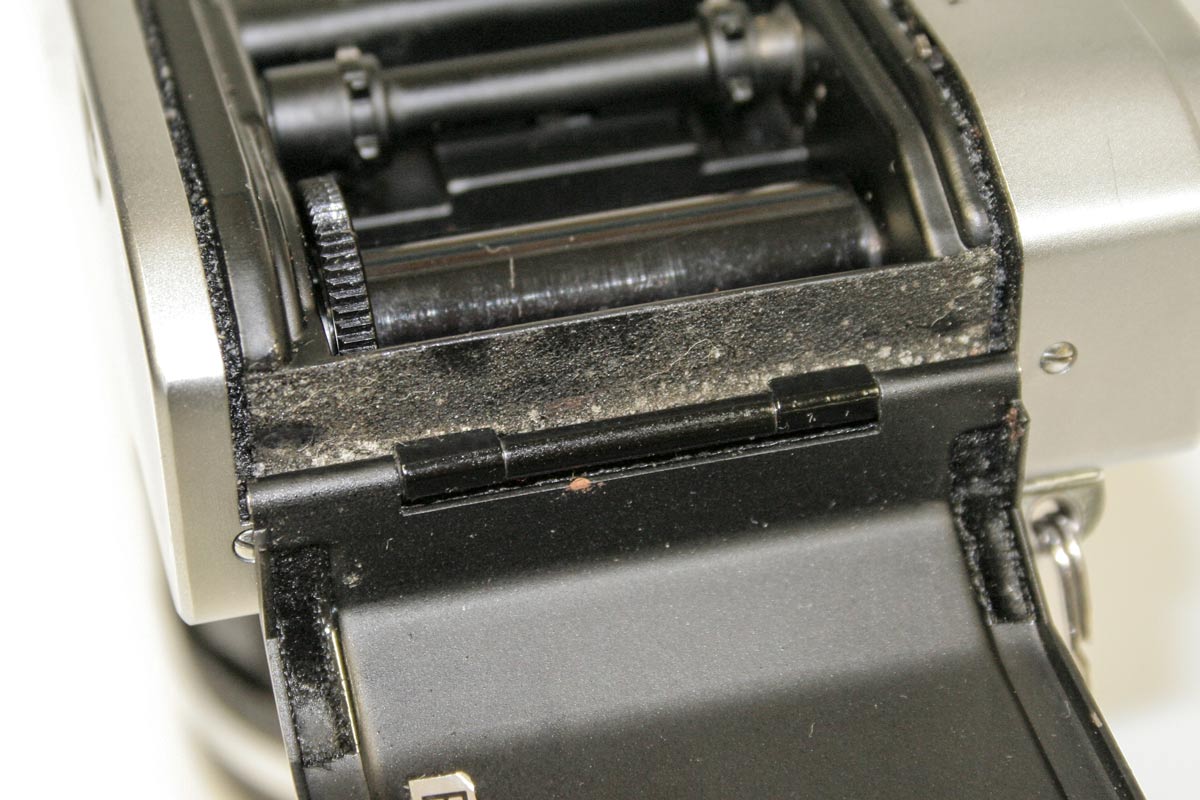 Here you can see that the foam is missing on the flat surface at the end of the camera. When the camera back closes it does not come in contact with this surface but stands about a millimetre or so from it. Enough for light to travel from the hinge into the film compartment. 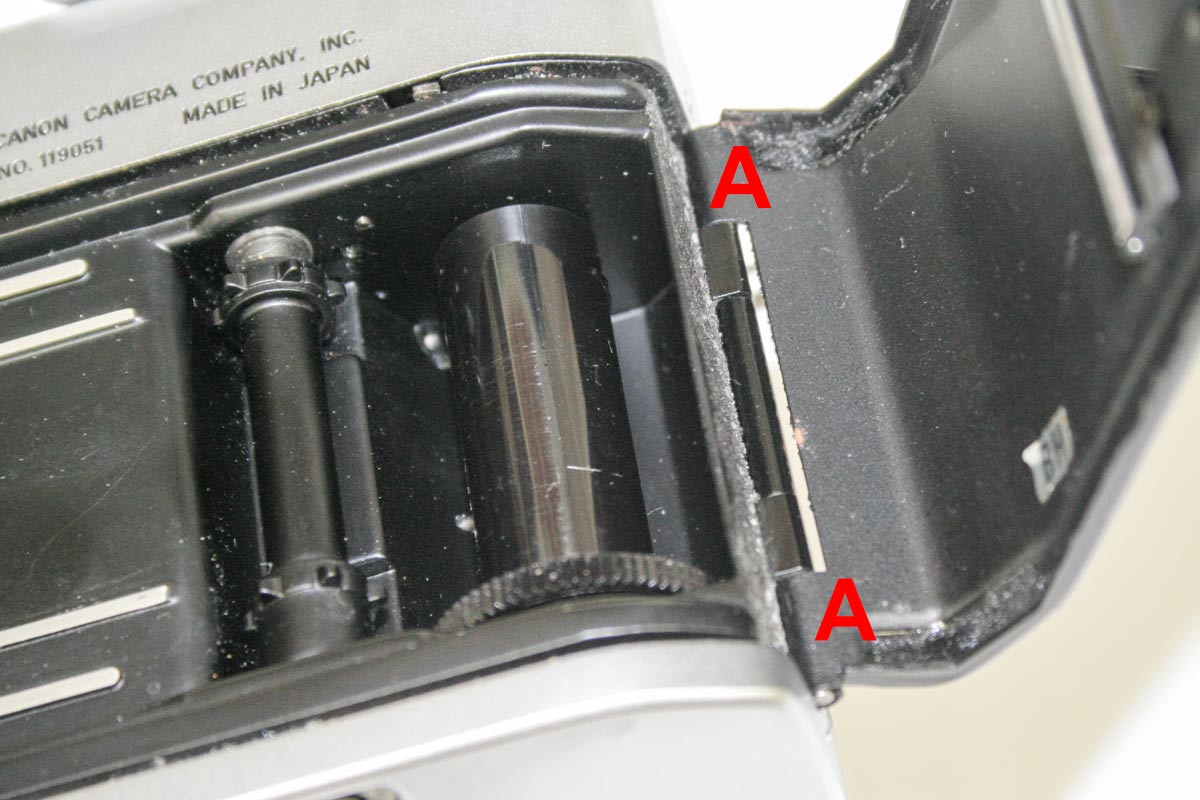 Between the two red “A’s”  you can see a bright white line. That is the gap in the hinge and it does not close up when the back does. This camera relies on the foam light baffle to seal off the film compartment. The foam that is not there because of the age of the camera.

I sat with the film and the camera and thought about it. First thing I noticed was how dirty the camera was. I had not done a complete clean of the camera before taking it out. That was an embarrassing discovery! I like clean equipment but I was obviously not meticulous about it.

If I had been I would have noticed that the foam light seals had turned to goo as the foam from this period was wont to do. In fact, at the hinge for the camera back it was gone altogether. And when I looked closely there was a wide gap between camera body and back right along the hinge!

It seemed unlikely that this was the problem but taking the film and looking at it I noticed that the fog pattern was always the same distance from the shutter opening and it stopped just at the point the roller holding the film against the winding sprocket crossed the film. And at that point the fog extended across the film in a sharp line, just as the roller did. That was it.

Light was leaking in at the hinge and shining across the film until it got to the roller which blocked it from going any further. That formed the sharp line across the film. It all fit together. But at this point I only had a theory. The next step will be to install new foam and then take another roll of film. I will report fully on the process. 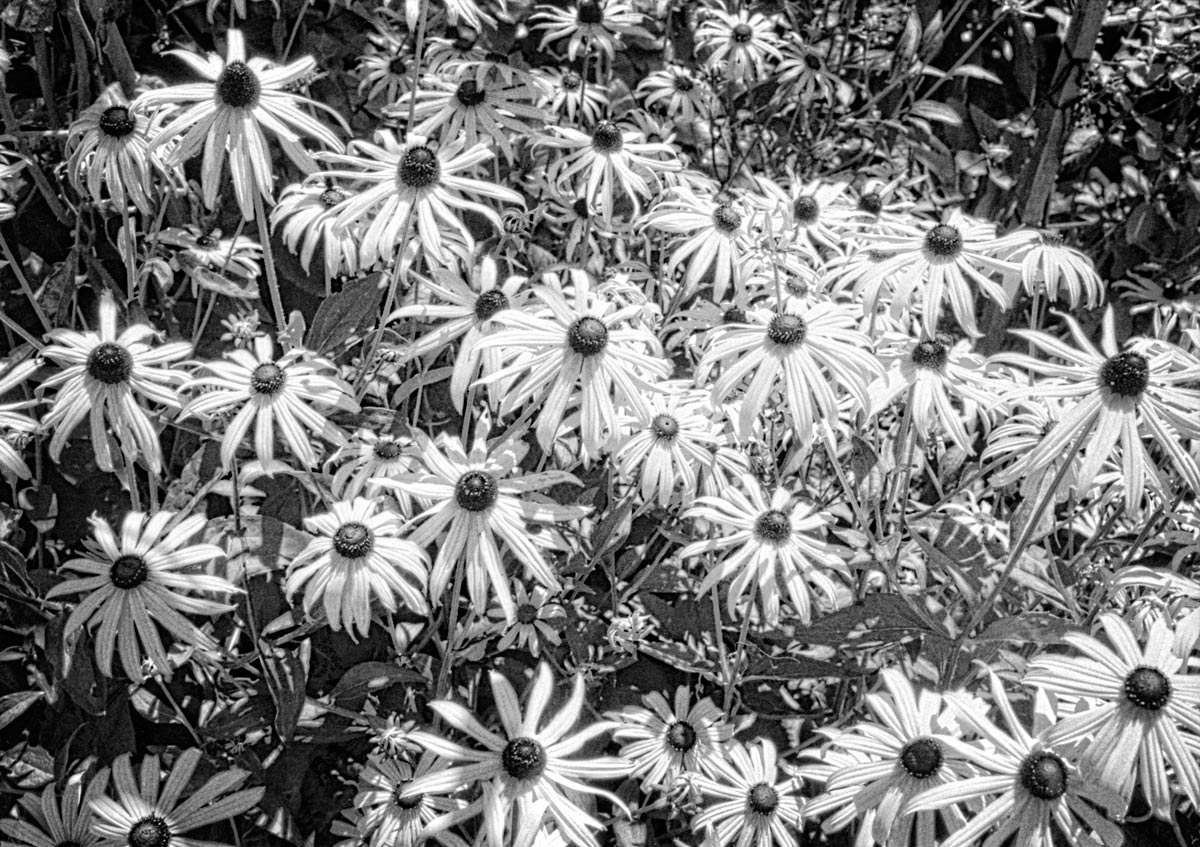 One last image. Out of the whole roll of film, these were the only images I was able to salvage. I will repair the foam light seals and report fully to you on how I do it and the results with another roll of film.