A Day with the Brownie Target Six-20 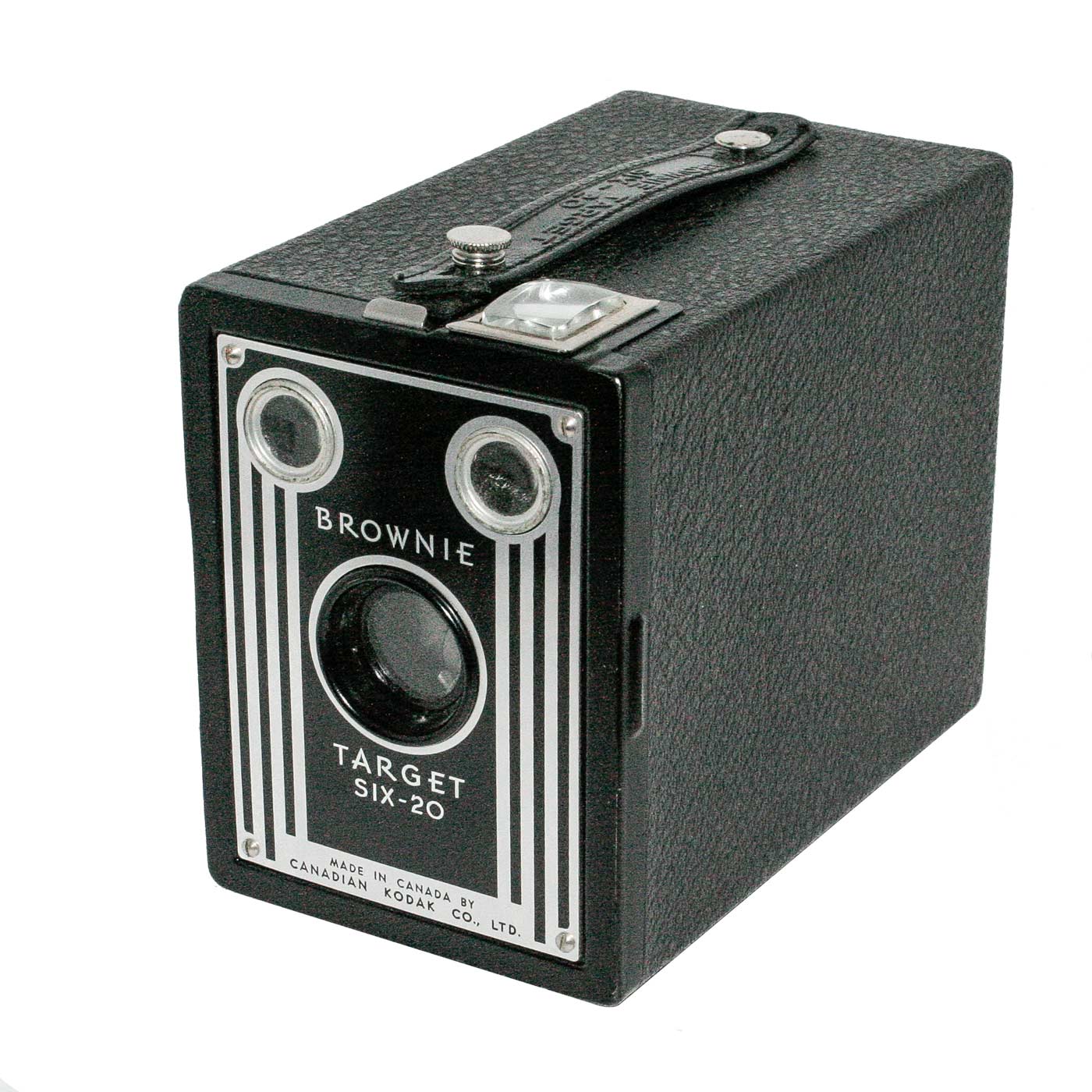 This is my Kodak Brownie Target 620. It is in new condition and fully functional. But then, there is not much to go wrong with it that cannot be easily fixed.

Knowing how you hang on my every word, you will undoubtedly remember my writing about acquiring a Kodak Brownie Target Six-20. Being in such good condition is is truly a machine worthy of the name “camera”. As I said earlier, I was anxious to actually try it.

Unfortunately, time is at a premium in my over busy life and I did not get around to it right away. I read about 620 film, and wrote about it, and even spooled a role of 120 film onto a 620 reel. But by then I was into a dreary winter of rain and snow and the picture taking was not the best. A holiday in the Caribbean intervened and then I got busy writing about that. But I was still thinking about my Target 620.

Finally, in frustration, I took the box camera and shot whatever was at hand. Well, as much as you can shoot in eight frames! I took a picture of Susan’s daughter

and her family on their sun deck and then I went out into a snowy slushy day with no sun and used up the rest of the roll. This is not the way to pusue photography but I wanted to see what this camera could do.

I finally developed my film the other night. Seven images. Well, eight really but I did a classic double exposure right out of the starting gate. So seven usable images. Amazingly, they all seemed reasonably well exposed. And these are big negatives! But I was not very happy: they appeared very contrasty.

I had used my light meter and the camera gave me a choice of 1/30th second at f/11 or f/16. I took the closest option and it seemed to work. Probably a great credit to the film and not the photographer. So lets look at the images and see what we learned. 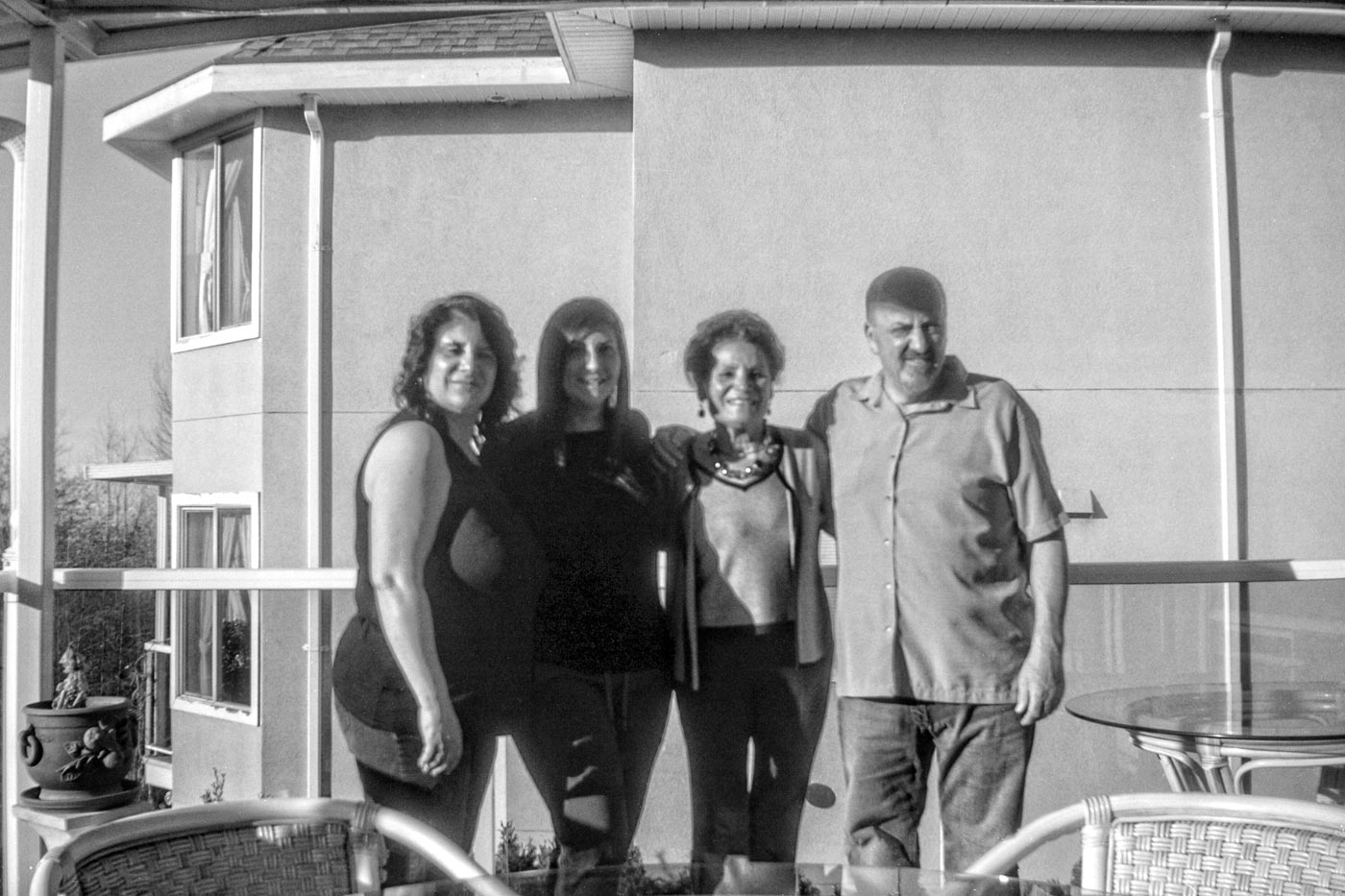 I took this picture on Christina’s sun deck late in the evening in winter when the sun was low. The shadows were terrible and would have been a challenge for any camera. I was about ten feet away which, according the the camera’s manual, is in the camera’s range of focus. “Everything 8′ and further from the lens will be sharp”. Well, “sharp” is a relative term.

First the composition. I took two images and in both the camera is pointed too high. I cannot imagine that I would do that two times in a row. I know

better. So I suspect that the viewfinder is misaligned or there is a parallax problem.

Contrast is high but once I got the images scanned I was able to bring up some shadow detail but the shadows are still objectionable. But really, I didn’t give the camera a chance. The light was terrible.

But look at the focus. It looks like I moved the camera during exposure. But, no, look at the building in the background: it does not seem to have moved. In fact, its focus is not that bad. I think, rather, that I am simply too close to my subject in spite of what the book says. But that is a tall order, to be focused from 8 feet to infinity.

I didn’t crop this image, or any of the others here, because I want you to see the whole negative and assess the corners and edges.

On this camera the trigger is very primitive. It is just a small piece of metal that sticks out the side of the camera and you have to push it to trip the shutter. It takes considerable movement of your finger which is not good. The camera is awkward to hold to start with, the shutter is slow and there is no image stabilization, and add to those problems that you are moving your finger as the shutter fires. This is a recipe for camera shake during exposure.

On a modern camera the shutter is fired by the press of a button and that press involves minimal movement. Typically it is a two stage affair and the final press fires the camera without the finger actually moving. And, of course, we use higher speeds and we have image stabilization. And even then the use of a tripod comes highly recommended.

So this old camera presents challenges just in the ergonomics of the thing to getting sharp images.

That is all my Brownie has for a lens: a single piece of glass. At least I assume it’s glass. And that seems strange because I have always been told about the problems of single element lenses. And yet, look at the background of the image above. It shows some semblance of quality. Hmmmm!

That got me really curious because I had never considered what one could do with a simple lens. When I thought about it, I had no idea what single elements could do or whether they might be useful.

So what can this lens do with more distant objects that are more in focus? That quetion led me to look more closely at the other images on my roll of film.

This is where I got taken by surprise. I was not happy with my other images. The contrast was too high and the subject, a slushy street scene, was not very interesting. But I chose two of the negatives, the same scene, one horizontal and one vertical, and scanned them and processed them. It was exciting to see what I could do with what I thought were inherently poor images. 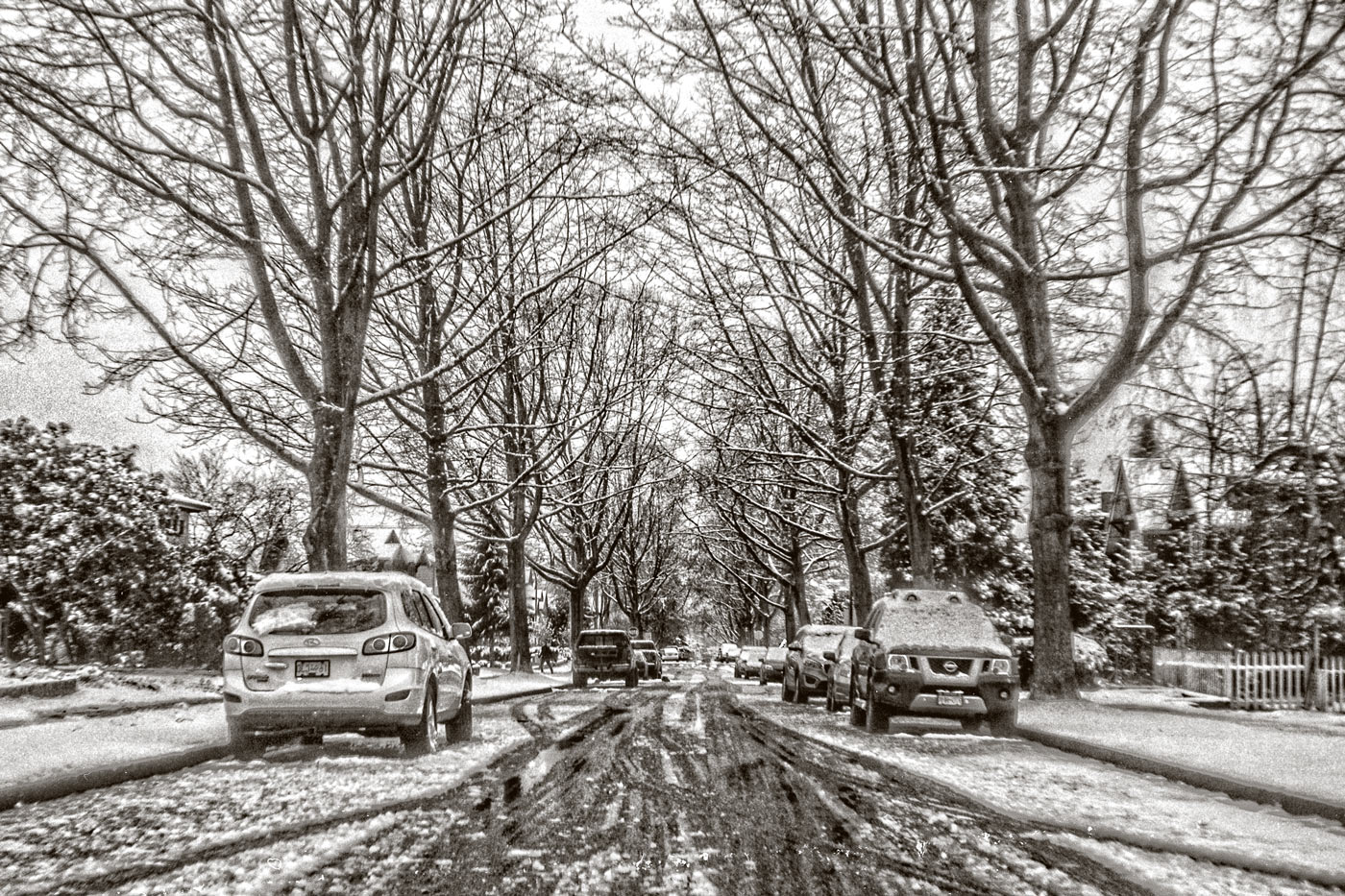 Grey sky, white snow and slush, black street and trees. Black and white film was able to capture it all. 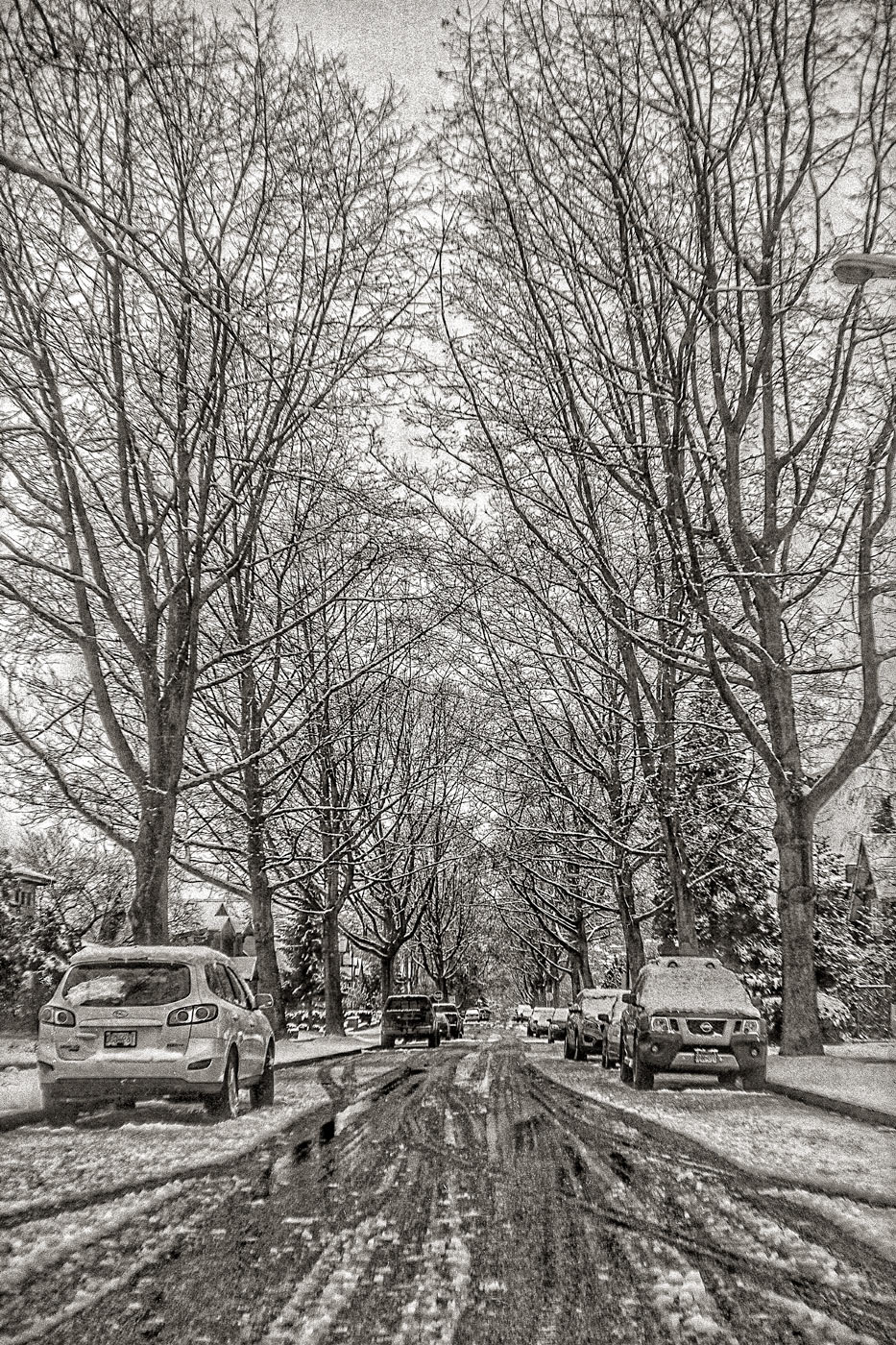 My slushy street scene. This was a very black and white image. There was no color in the day.

These images are really interesting. First, they have pretty good focus. It falls off to the edges and especially the corners but a decent 8X10 inch print is possible. And remember, these cameras usually yielded contact prints or at most 4 x5 inch prints or their equivalent in the day. So, for the expected output the lens is totally adequate.

But there is more. Look at the structure of the image. I don’t know how to describe it but there seems to be a structure to the blur on the edges of elements in the picture. It seems to have a sharpness surrounded by a halo.

I remember writing somewhere here that I envied oil and watercolor painters their abilty to blend edges. I was concerned that modern cameras are often too sharp making interpretation very difficult. With today’s cameras you really get what is in front of you without the ability, in the camera at least, to blend and interpret. This lens seems to solve that problem. I think it could be a useful tool in ones kit.

So, given the poor shooting conditions, I am impressed with my first outing with this camera. There will be other days in the field.  I want to see what we can do with better shooting conditions. I have a feeling that anyone who dismisses these old cameras out of hand is missing a lot.

And this is why I am shooting my old cameras. I am learning about photography. I have been taking pictures for sixty years and here I am still learning. Go figure!!!