I have been waiting for a long time for a Canon mirrorless camera. As I have said here, I even bought a Sony NEX C3 to experiment with a mirrorless body (that just increased my appetite for the Canon offering). For months I have been reading the rumors and speculations published online by sites such as canonrumors.com and dpreview.com.  As we all know, the wait ended a few weeks ago with the introduction of the Canon EOS R camera.

I don’t do camera reviews on this site. There are so many people online who do that better than I could that I am content to refer you to them. I am trying to describe my collection and comment on various Canon cameras I manage to acquire and place them in an historical perspective.

A few weeks ago I purchased a Canon R after reading comments and reviews about it. And I am loving it! This is an incredible camera from a non-professional enthusiasts point of view. It is so much fun.

But where does this camera fit in the Canon lineup? 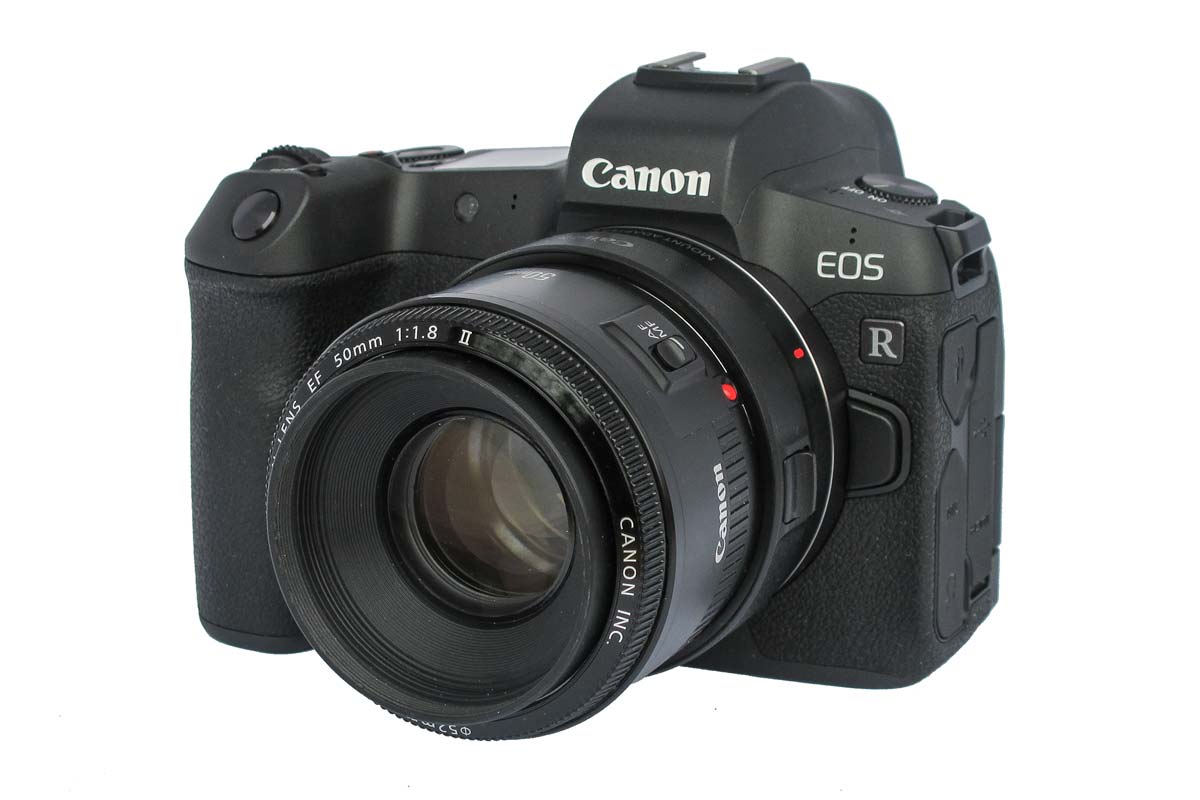 This is my new EOS R with an EOS EF 50mm f/1.8 II lens. The beautiful thing about this camera, or at least one of the beautiful things, is that it will accept all of my EF lenses. Using the Canon adapter it is fully functional as if made for the R mount. 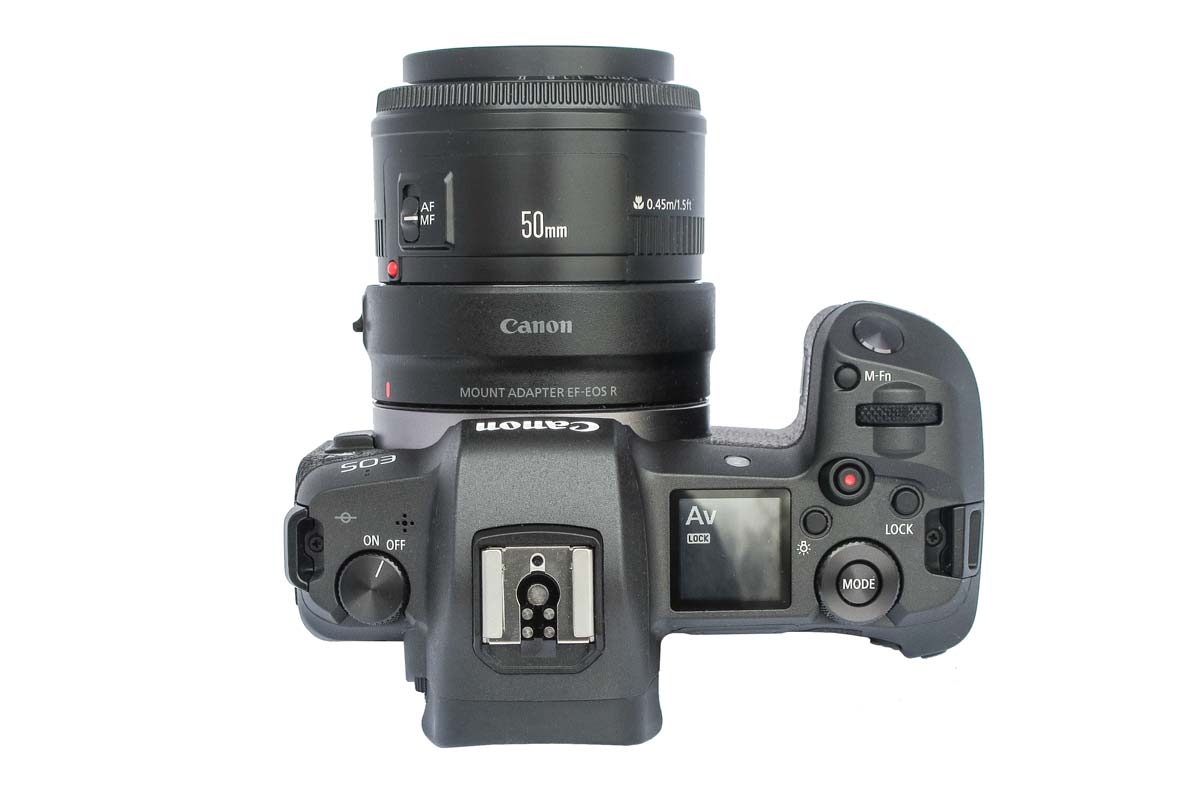 The top is clean and simple. The hand grip is deep and comfortable to hold. Accessing features takes a little getting used to. 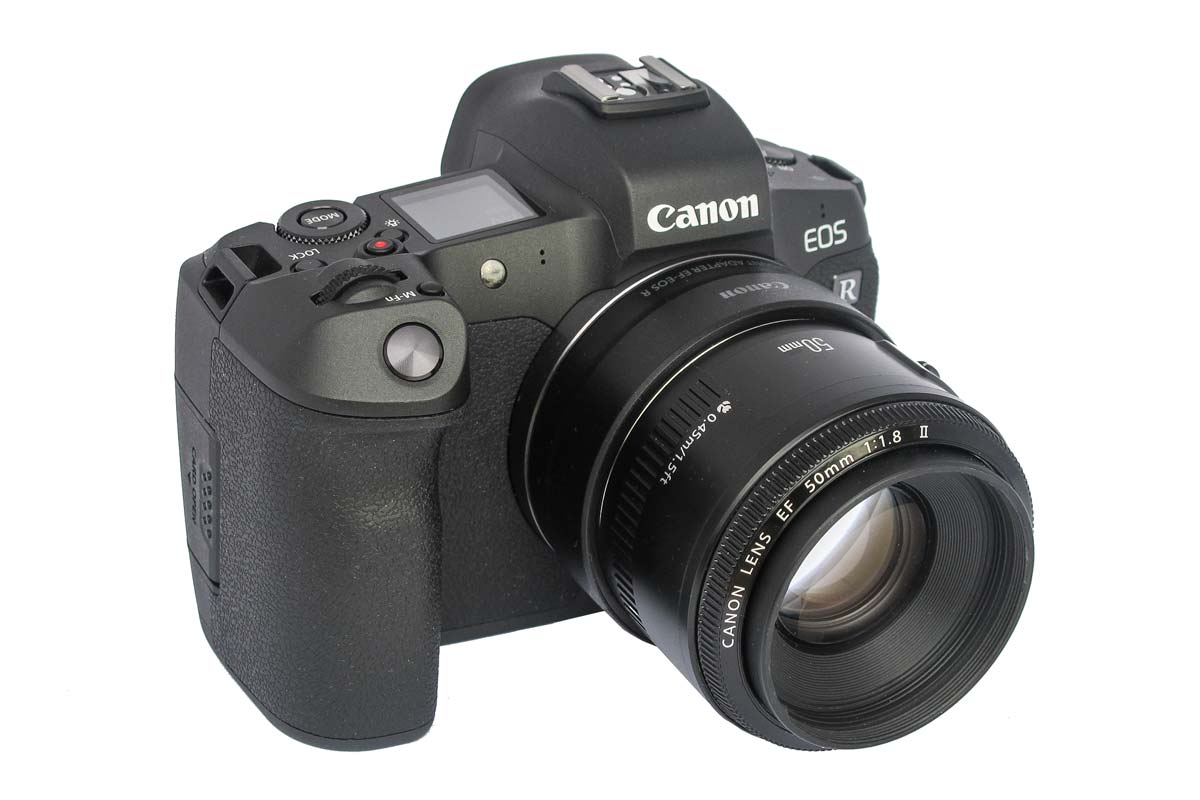 The EOS R looks very like its predessessor DSLR’s however it is noticibly smaller. 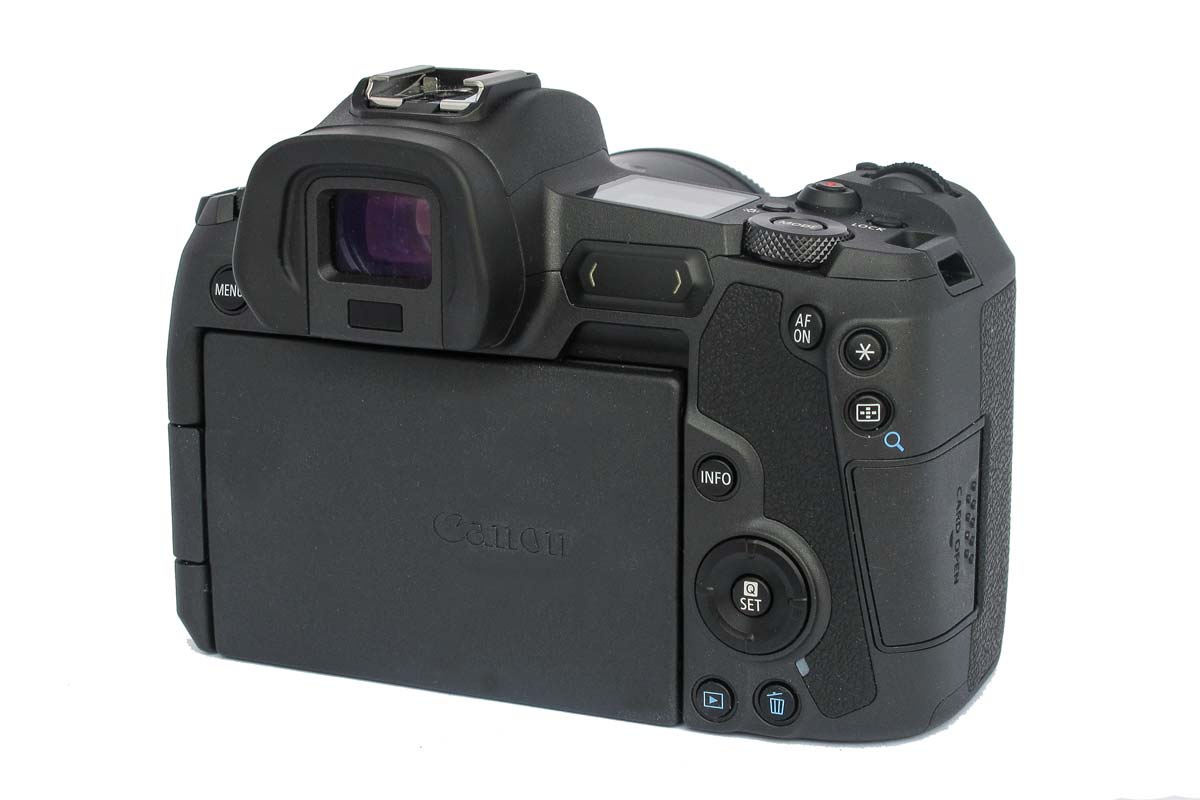 The LCD screen on the back is fully articulated. Here it is shown in the closed position.

The story of Canon cameras can be divided into lens mount eras. As cameras have developed the demands on lenses have changed and this has shaped the development of the lens mount

The rangefinder cameras for years had a Leica M-39 screw mount system with a flange distance of 28.8mm. These were manual lenses in which the user had to set the focus and the aperture. These cameras and lenses are generally referred to as the “S” series. This lens mount was adequate for the rangefinder era.

In March of 1959, under pressure from their competitors, Canon introduced the Canonflex SLR camera. The camera had a mirror inserted into the light path which flipped up when the shutter was triggered allowing the light to pass to the film. A flange distance of 28.8mm was not sufficient. Not only that but Canon wanted to have a lens that stayed fully open for focusing which required a certain amount of communication between lens and camera body. A new lens mount was necessary along with new lenses. The old “S” lenses could not be mounted on this new camera with its 42mm flange distance so new lenses were required. Enter the Canonflex R series of lenses. 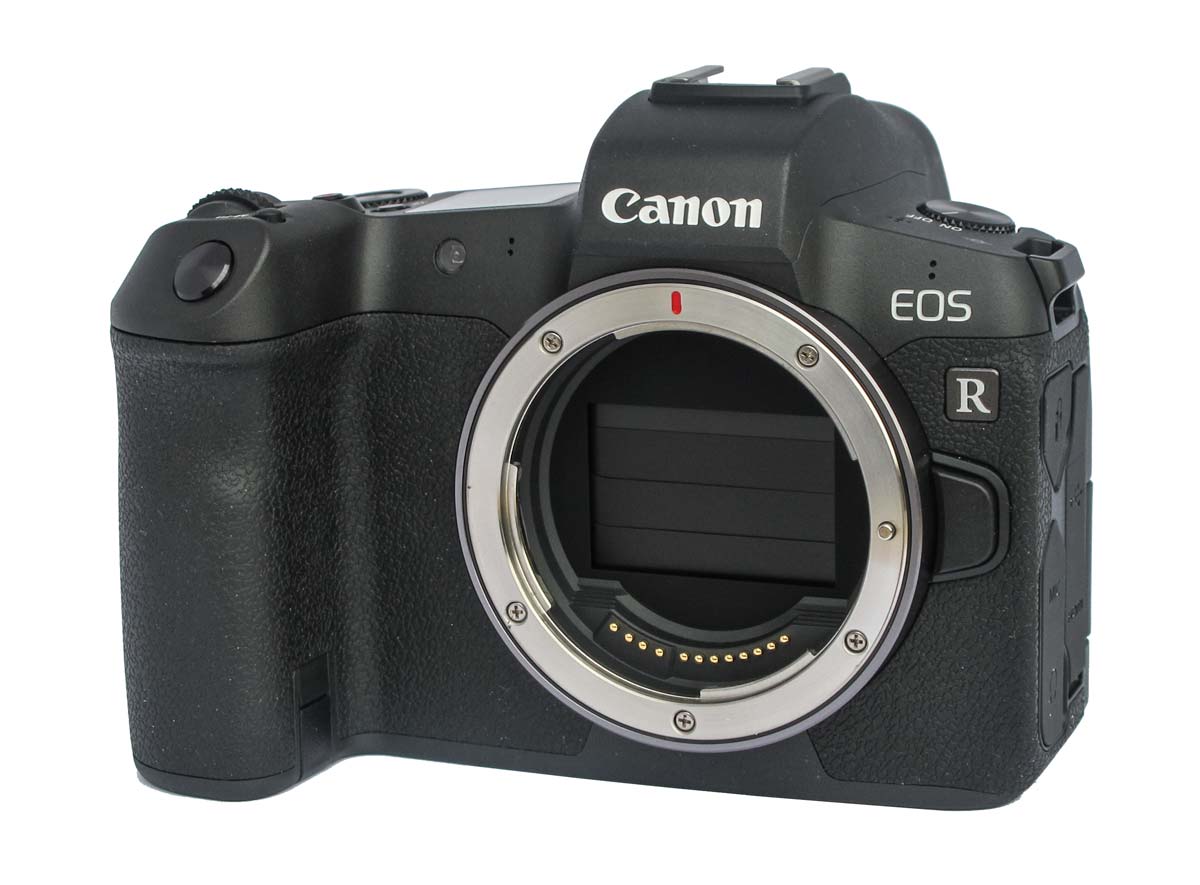 With no lens or EF adapter an the camera the shutter that closes over the sensor when the camera is off  is clearly visible.

The LCD screen opens the same way as it does on my 60D, which is very useful in the field, and it contains much more camera information.

The Canonflex did not do well in the market and in April of 1964 Canon introduced the Canon FX, the first of the very successful “F” series. And with it came a slightly modified lens mount, the FL mount. It still maintained the 42mm flange distance and, although it had a quick return mirror, still required aperture to be set manually.

Market pressure kept forcing development of new features and at the time through the lens metering was becoming important. The R and FL mounts did not adequately provide for this.

Once again a change was needed to meet the new demand and in March of 1971 Canon introduced the FD lens mount with the F-1 camera. This was basically the FL mount but provided for lens aperture information between camera and lens and automatic setting of the aperature. Flange distance was unchanged. The FDn lens mount made the FN more of a bayonet mount but nothing else changed and the FD and FDn are interchangeable.

With no lens and the EOS adapter off the camera the shutter that closes over the sensor when the camera is off is clearly visible. 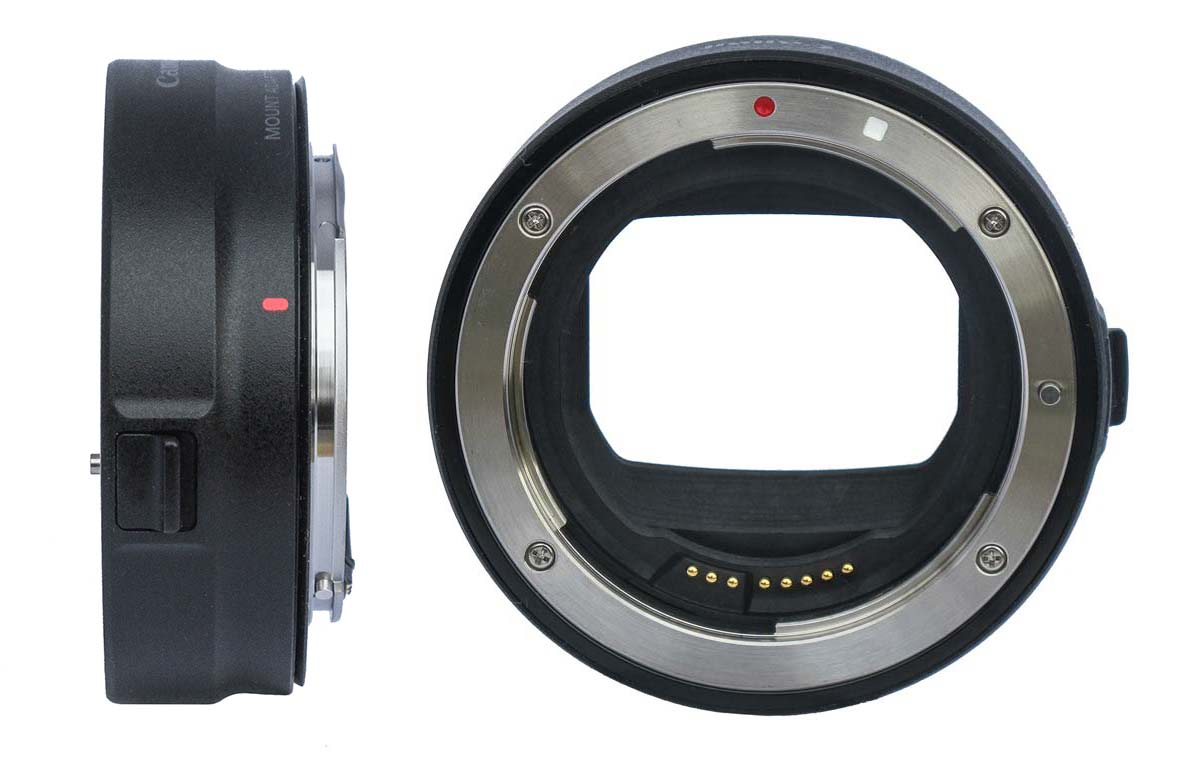 EF and EF-S  lenses can be used on the Canon R with no degradation in function. It is as if they are native to the camera. This means all of my EF glass is still useable. 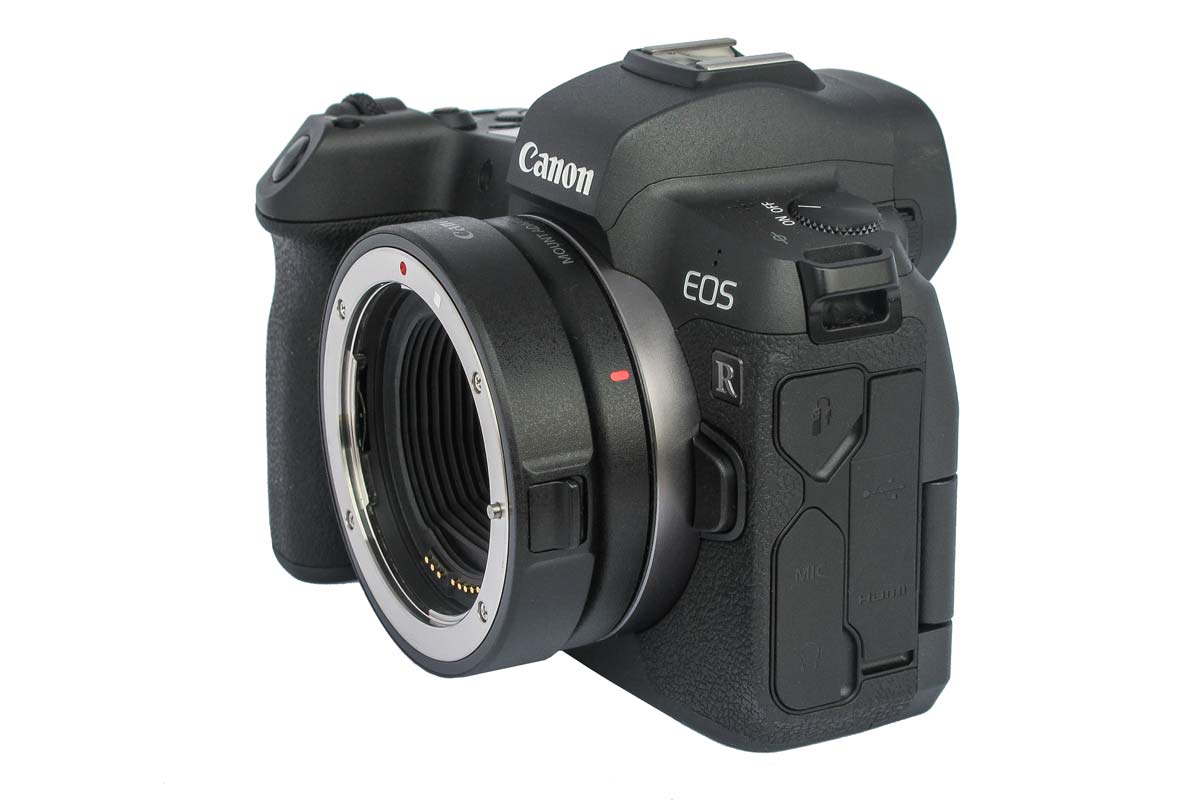 Because I am using my old EF lenses, for now, the EF adapter stays on my Canon R, as shown here. Eventually, when the budget permits, I will venture into the new RF lens made specifically for this camera. 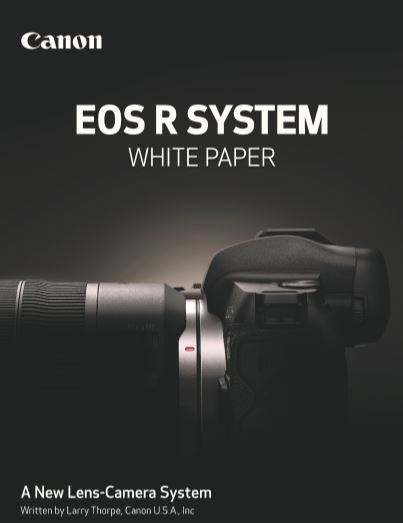 Before releasing the actual Canon R camera Canon published a very interesting discussion paper on the present state of the EOS system and why it needed to change. This is a very interesting publication and well worth an hour of your time. 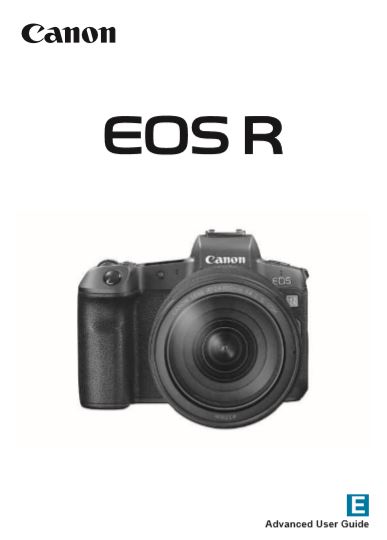 The Canon R is a new  and requires a new way of thinking about your camera. When you buy the R body there is a User Manual in the box to get you started. But it is not the full manual. That you get online. This is the book you go to to learn how to use this camera. Read it here or download it to your hard drive and study it with camera in hand. It’s fun and every day I learn a new trick or two.

The FD mount served well for many years, however, the market intruded again: autofocus had arrived. The venerable FD and FDn mounts had no provision for communicating focus information back and forth or moving the lens forward or back.

Canon made some difficult decisions at this point concerning the development philosophy of their lenses and history has shown them, with hindsight, to have been very wise. They chose to include the necessary focus motors in the lenses themselves and not in the body of the camera. And they decided to do away with mechanical linkages in favor of an all electric communication lens to body and back. This became the EOS (Electro Optical System) system introduced in 1987. The first camera mount in the system was the EF (Electro Focus) which was followed by the EF-S and the M mounts.

Flange distance on this mount was 44mm, the largest yet in the Canon lineup. It meant that earlier lenses, to be adapted to the EF mount, would not achieve infinity focus without an adaptive lens.

This was hard on users who had big investments in FD glass and there were many complaints. But few would argue today that Canon did not make the right decisions.

So, here we are, with a new camera and a new mount, again. Why? The RF mount, introduced with the Canon R, is physically similar to the EF mount and they look very much alike. There are a few more electrical contact pins but that is the only obvious difference.

But think about the layout of the camera. By removing the mirror there is no further need for the long flange distance of the SLR style camera. And for reasons of optical engineering, which totally escape me, the wide mount diameter combined with short focal distance allow for the creation of more precise lenses. So this camera has a flange distance of only 20mm.

Wait a minute! That is shorter than any of the other flange distances in the previous Canon lens mounts. Hello! That means that all previous Canon lenses, with appropriate adapters, will be usable on this camera. There is already an FD to RF adapter and more are sure to follow. In fact, almost any lens from any camera can be adapted to this body. They will be manually operated lenses but for those of us who love to play with our cameras and lenses, this is a boon. That alone justifies the investment in this camera, at least, for me.

A brilliant stroke of genius has been the creation of adapters for EF and EF-S lenses so that they function flawlessly. I am staying with my EF lenses for now so that I have backward compatibility with my earlier gear. The same lenses for both systems. Why not when they function equally well on both.

I hear that the new RF lenses are incredible and eventually I will acquire them but they are pricey and so they can wait.

In operation this camera is a new experience. Many of the settings are unfamiliar and I am experimenting with the camera and reading the manual daily. This requires study and I wonder if the casual shooter will be comfortable with this camera.

I like the size of it: smaller than my 5D II or 60D and more on a par with my XTi. Good to hold, the controls are positive with a good solid feel. That said, this camera has received much criticism. However, no mater what Canon came out with there would be those who felt a different way would have been better. I cannot speak as a professional, but as an avid enthusiast, this is a great camera and I can work around the rough spots. For me, the Canon R is a dream come true.