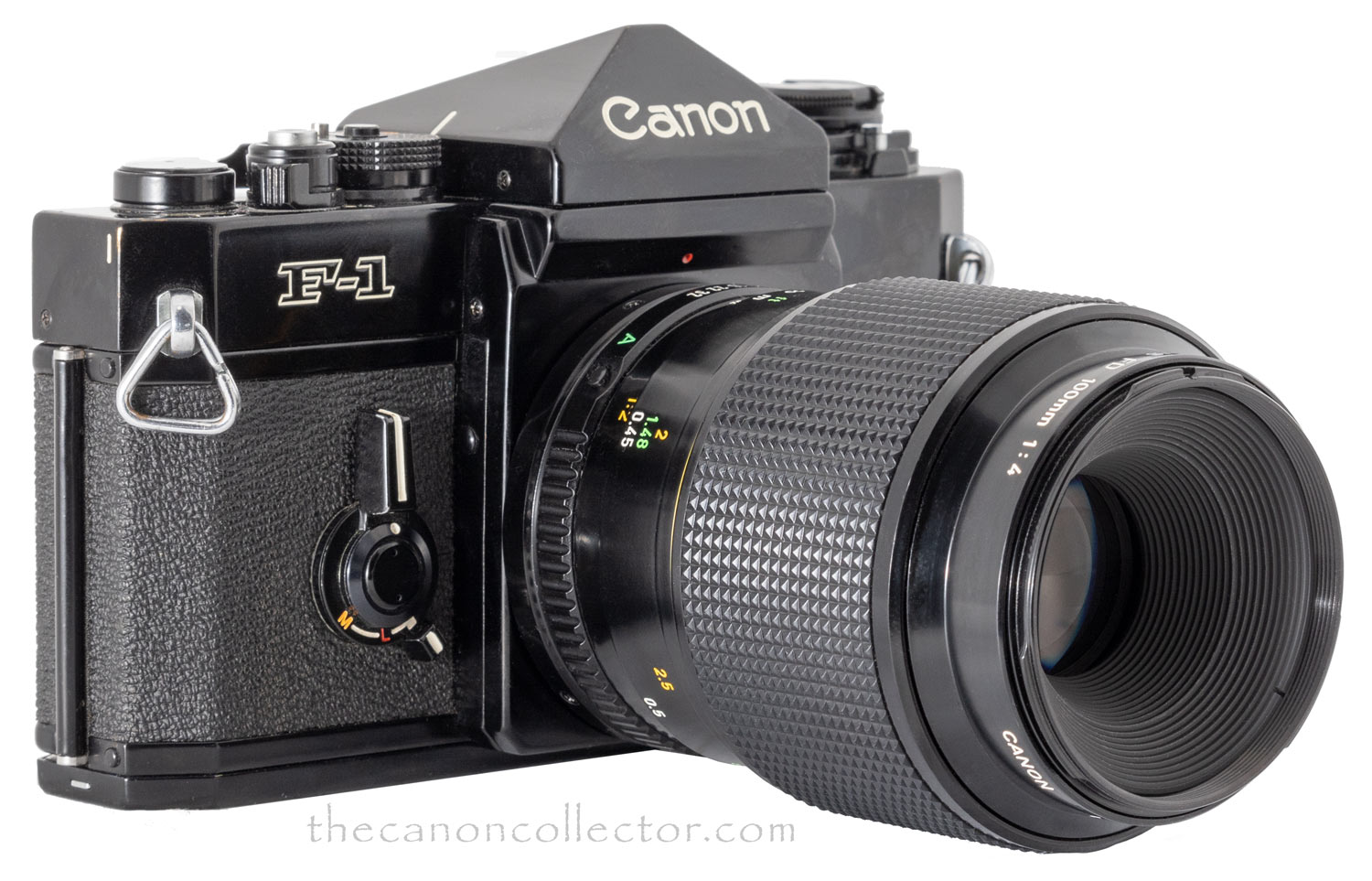 Before the arrival of the single lens reflex camera macro photography was a difficult
field that required skill and patience.
Without TTL viewing a good close-up
image was a hit and miss thing when
it came to 35mm photography.

Taking a close-up image was simple
in that all you needed to do was move
the lens further from the film surface.
But then focusing and exposure became
two difficult problems. Canon offered range
finder camera users extension tubes to move
the lenses away from the film plane but because of the difficulties of focus and exposure their use was largely restricted to

copy stands and technical applications where the added effort was deemed worthwhile. There was little or no casual use for macro lenses. Macro photography with 35mm cameras became mainstream with the arrival of the single lens reflex camera.

The Canonflex was not with us long enough for a macro lens to be introduced. The first such lenses appeared with the FL lens mount and the F Series of SLR’s. The first to be introduced was the FL 50mm 1:3.5 Macro which was first marketed in June of 1965. Then in September of 1969 they introduced the FLM 100mm 1:4 lens for close-up work. This was called a “bellows” lens because, although it was an FL mounted lens, the barrel was not long enough for the lens to be used without a bellows unit inserted between lens and camera.

With the introduction of the FDn lenses Canon introduced the FDn 50mm 1:3.5 Macro in June of 1979 and then in September of 1979 came our current lens under discussion: the FDn 100mm 1:4 Macro. (For completeness I should mention the FDn 200mm 1:4 Macro introduced in April of 1981 but we are not going there right now.) 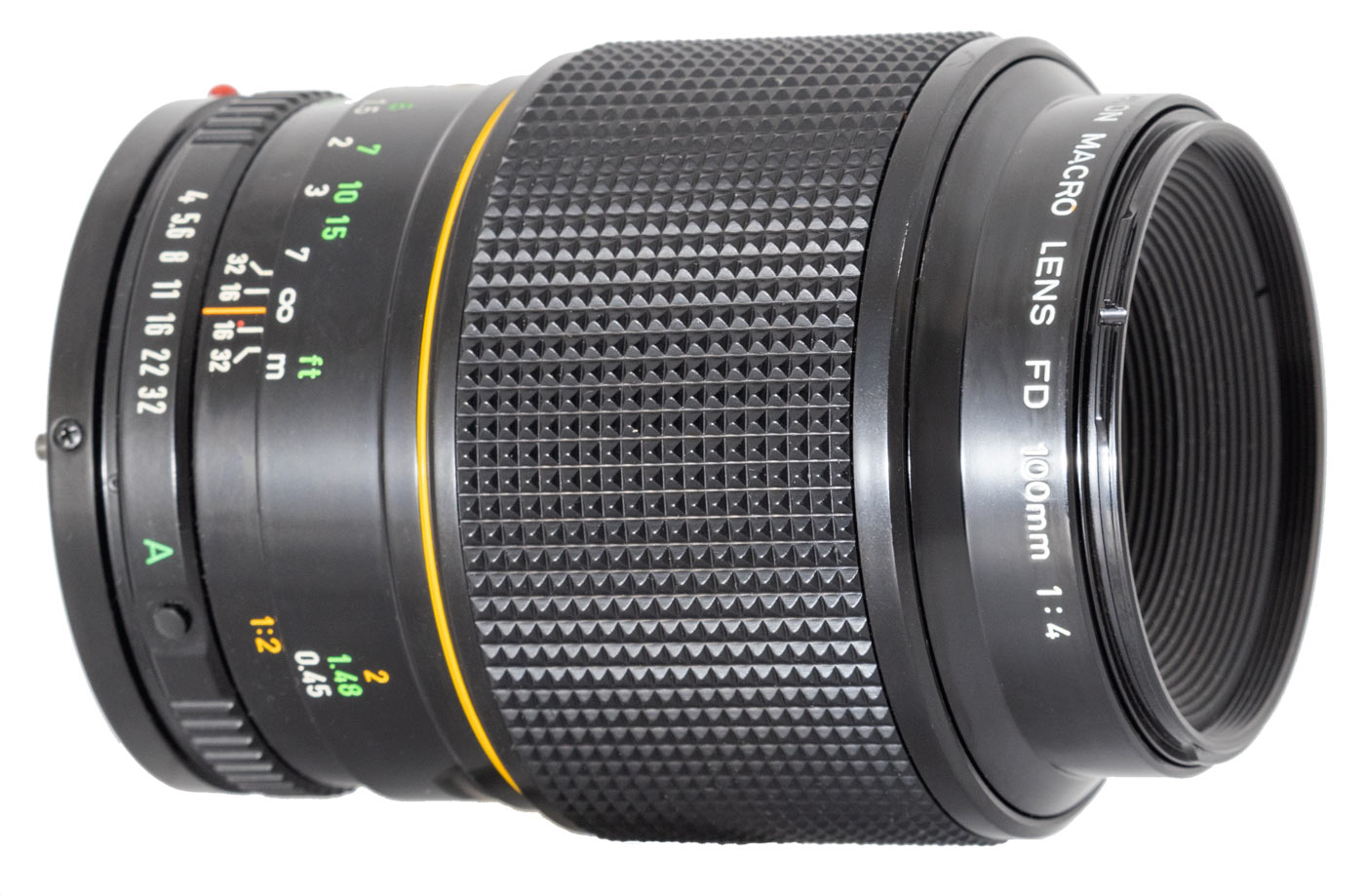 The FDn 100mm 1:4 has a generously large focus ring which hides a switch to increase friction on the focus helicoids to prevent focus creep when the lens is pointed downwards. 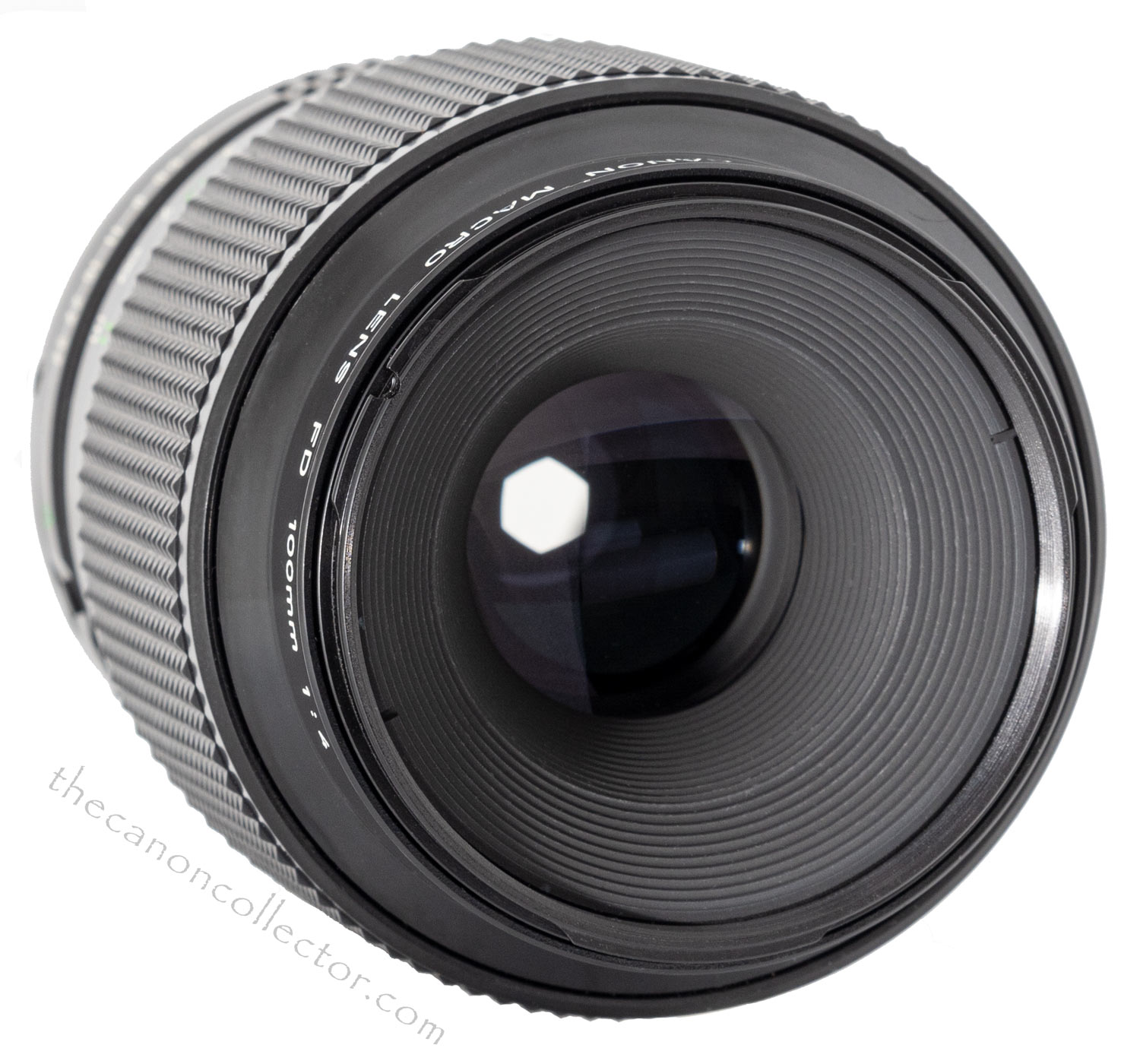 The front lens element is set back in the lens barrel providing a built in lens shade. The lens filter thread is 52mm diameter.

The 50mm macro lens is very common and can be purchased for under $100.00. Although it is an excellent lens it does offer some problems, the greatest of which is the distance from lens to subject at high magnifications. The lens, and camera, get so close to the subject that good lighting becomes a problem. The lens and camera’s shadow interferes with the light. The only way to increase that distance is to make the focal length longer allowing high magnification while still leaving enough distance for achieving an even illumination of the subject. Of course that means shallower depth of field which is why this lens will stop down to f/32.

To allow for focus from infinity to a few inches the lens barrel is constructed so as to allow the actual lens to move away from the film plane more than normal lenses do. So the lens focus ring by turning it several turns will extend the lens out dramatically as can be seen in the following photos. 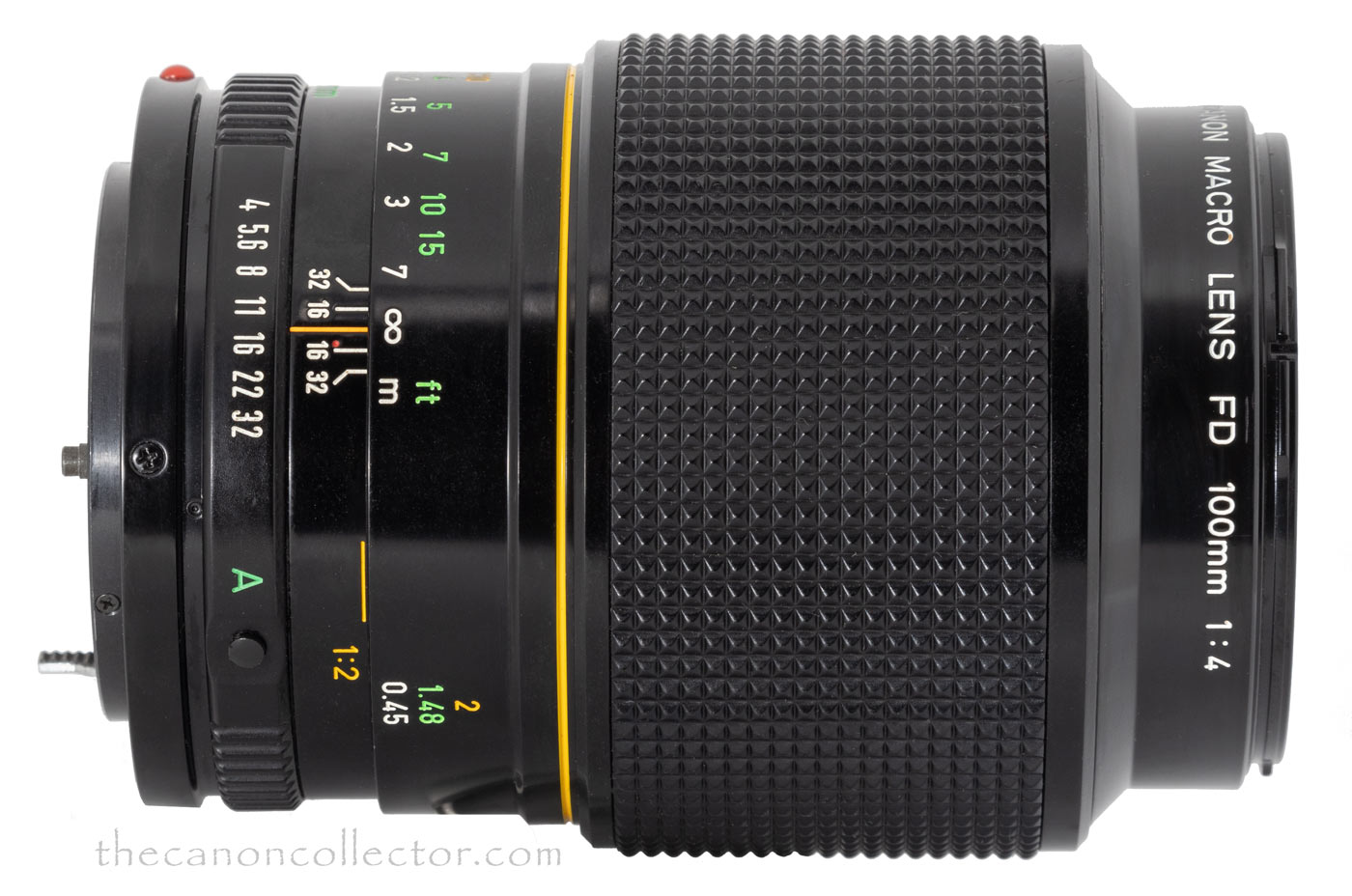 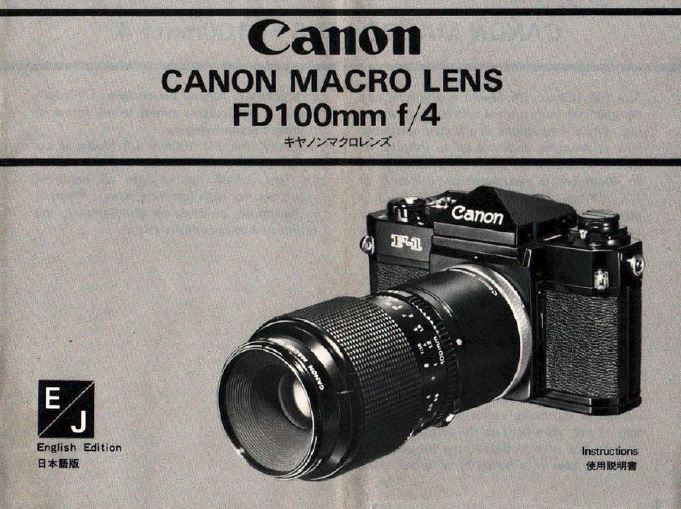 The FD 100mm f/4 Macro lens is almost identical and the manual for that lens explains the operation of the FDn version and the FD 50-U Extension Tube.

One last feature to note is indicated by the yellow line that surrounds the lens barrel in the pictures above. This band is just behind the knurled focus ring. 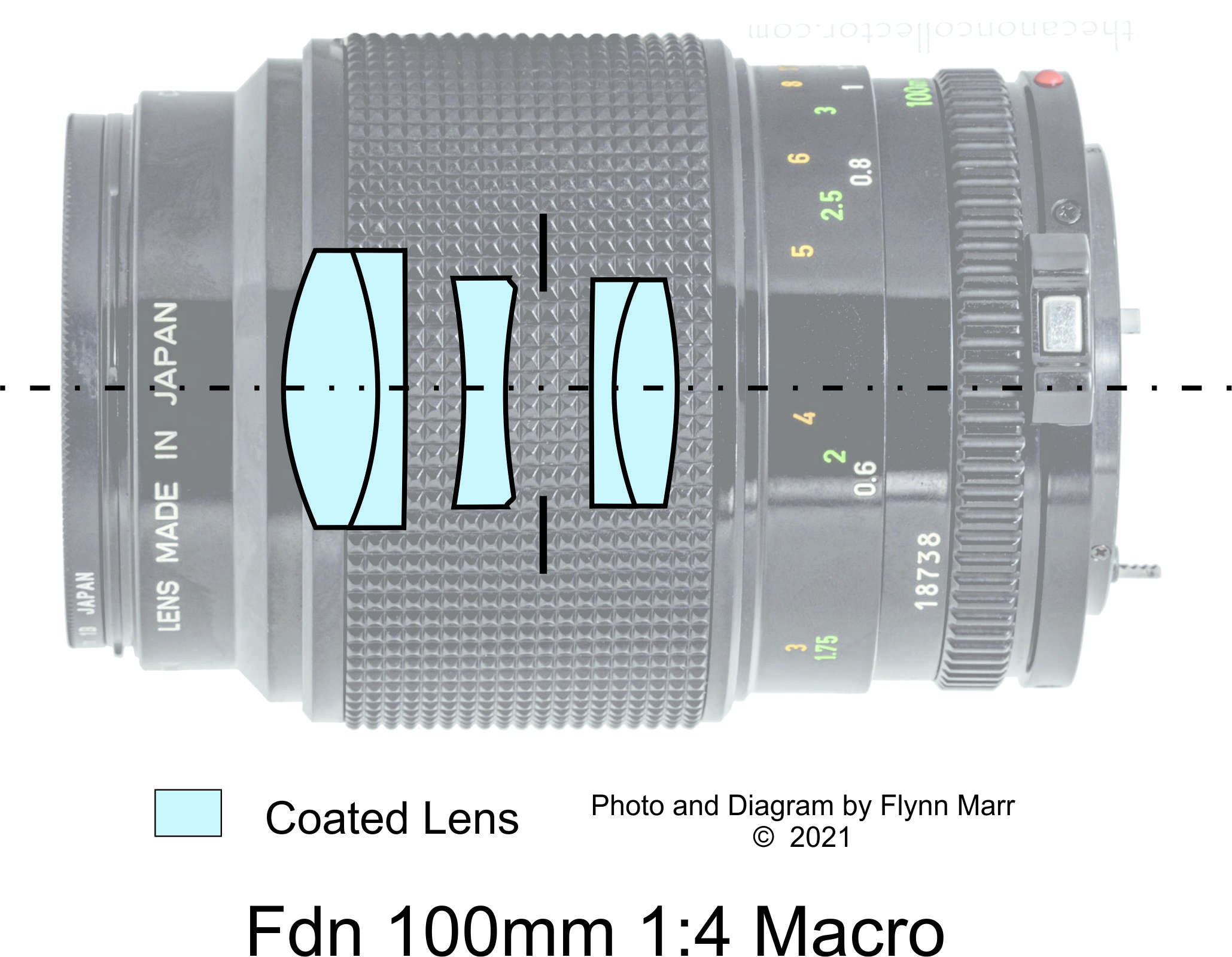 Shooting with the FDn 100mm Macro

Everything I read says that Canon Macro Lenses are especially designed to reduce aberrations to yield highly detailed accurate images. This is supposed to be especially so when the subject is very close to the lens. Well, it must be true because the performance of this particular lens is astonishing.

For my testing I mounted the lens on my Canon R which gave me 30 megapixel images to examine. Again, let me say that my tests are not scientific or exhaustive but only a sampling of the lens’ abilities. Regardless of magnification, from infinity to a maximum magnification of 0.5 this lens is sharp and almost aberration free. Look at these images: 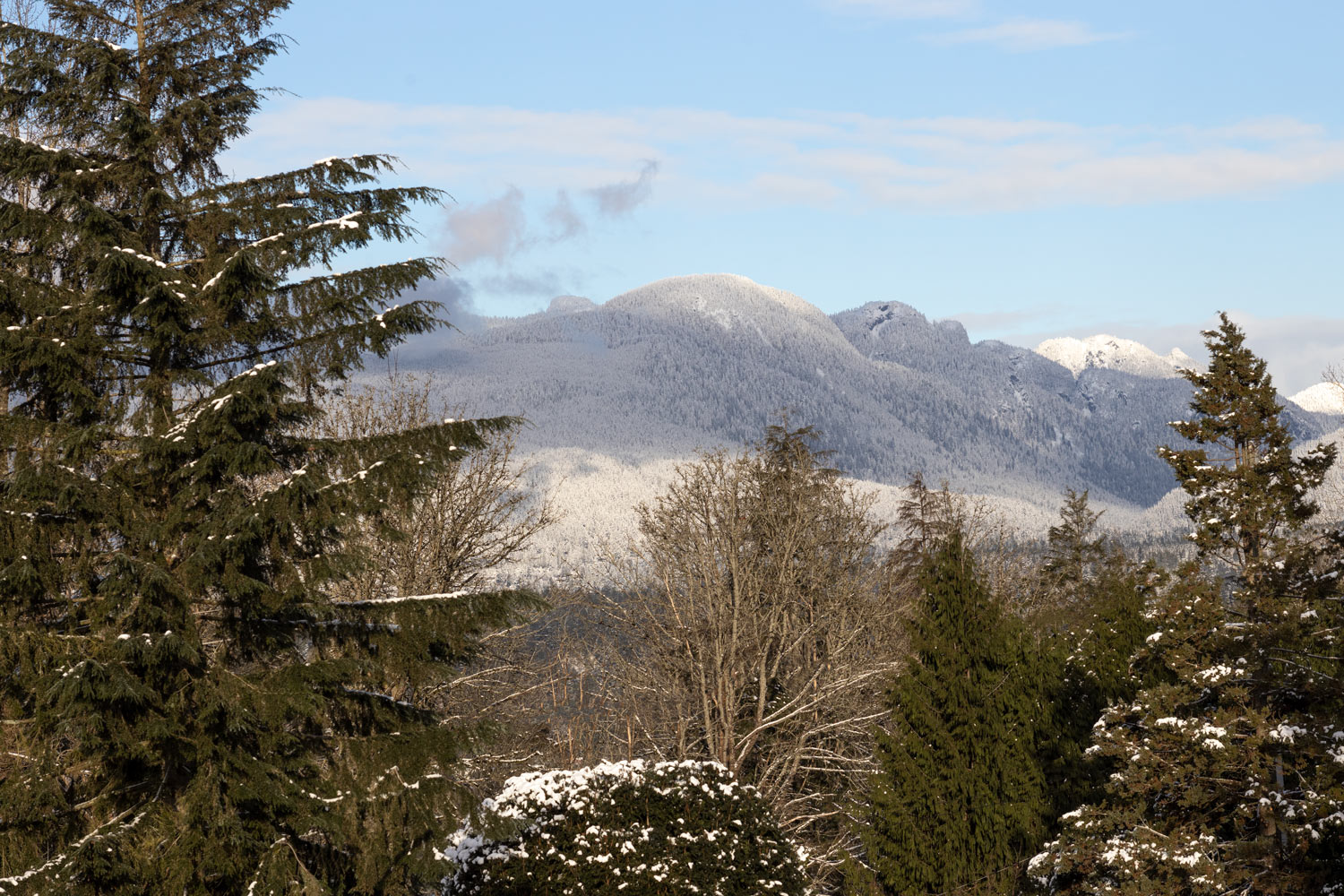 This image is taken from an upstairs window in our home. The trees on the edges are more than 50 feet away and the mountains of course are in the far distance. I shot this at f/11 so we are looking at the performance near the optimum aperture for this lens. This is the whole frame. 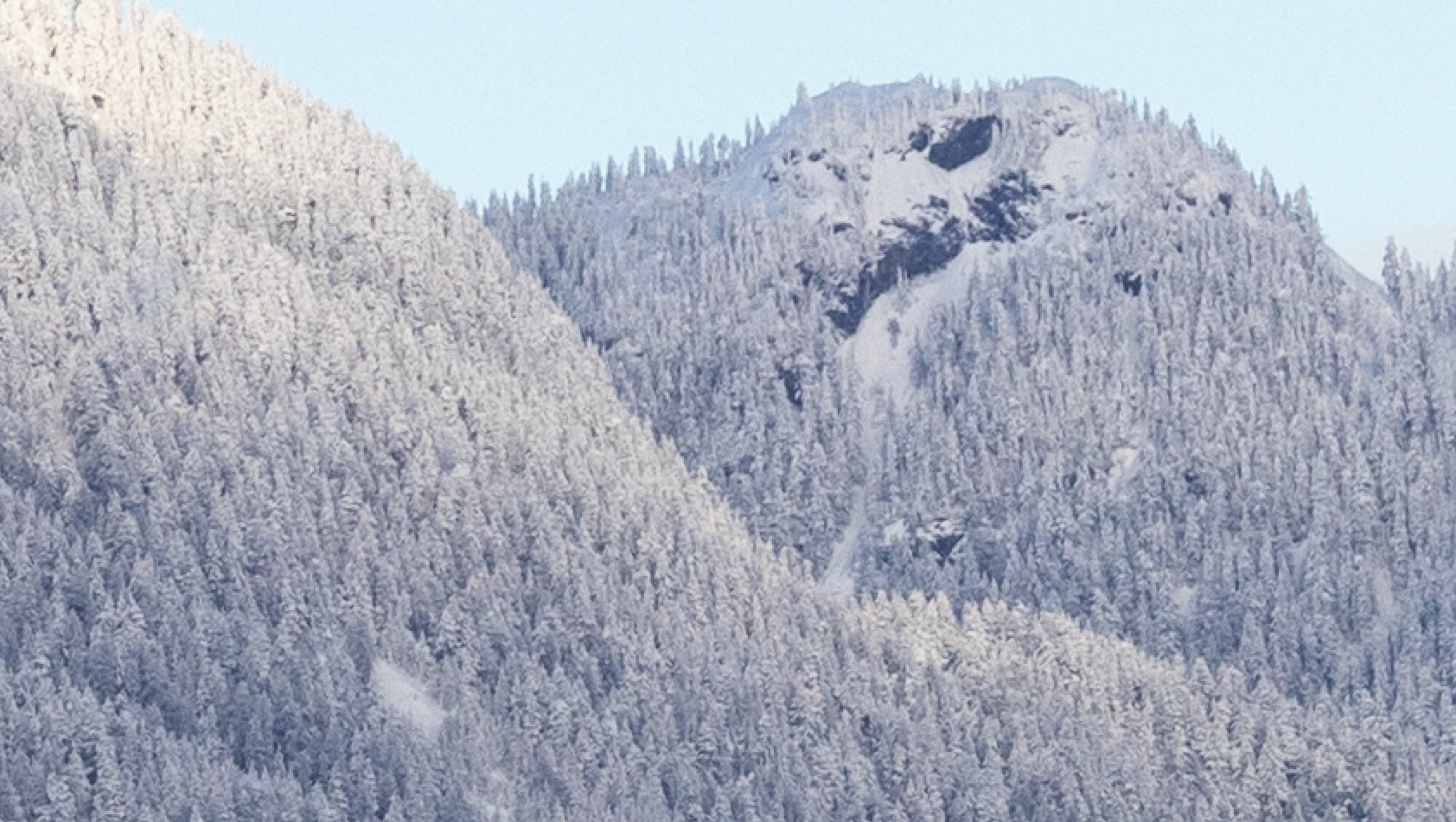 This is the mountain top taken from near the center of the image at 200%. Individual trees and rock faces can be made out without difficulty. There is no apparent color fringing. 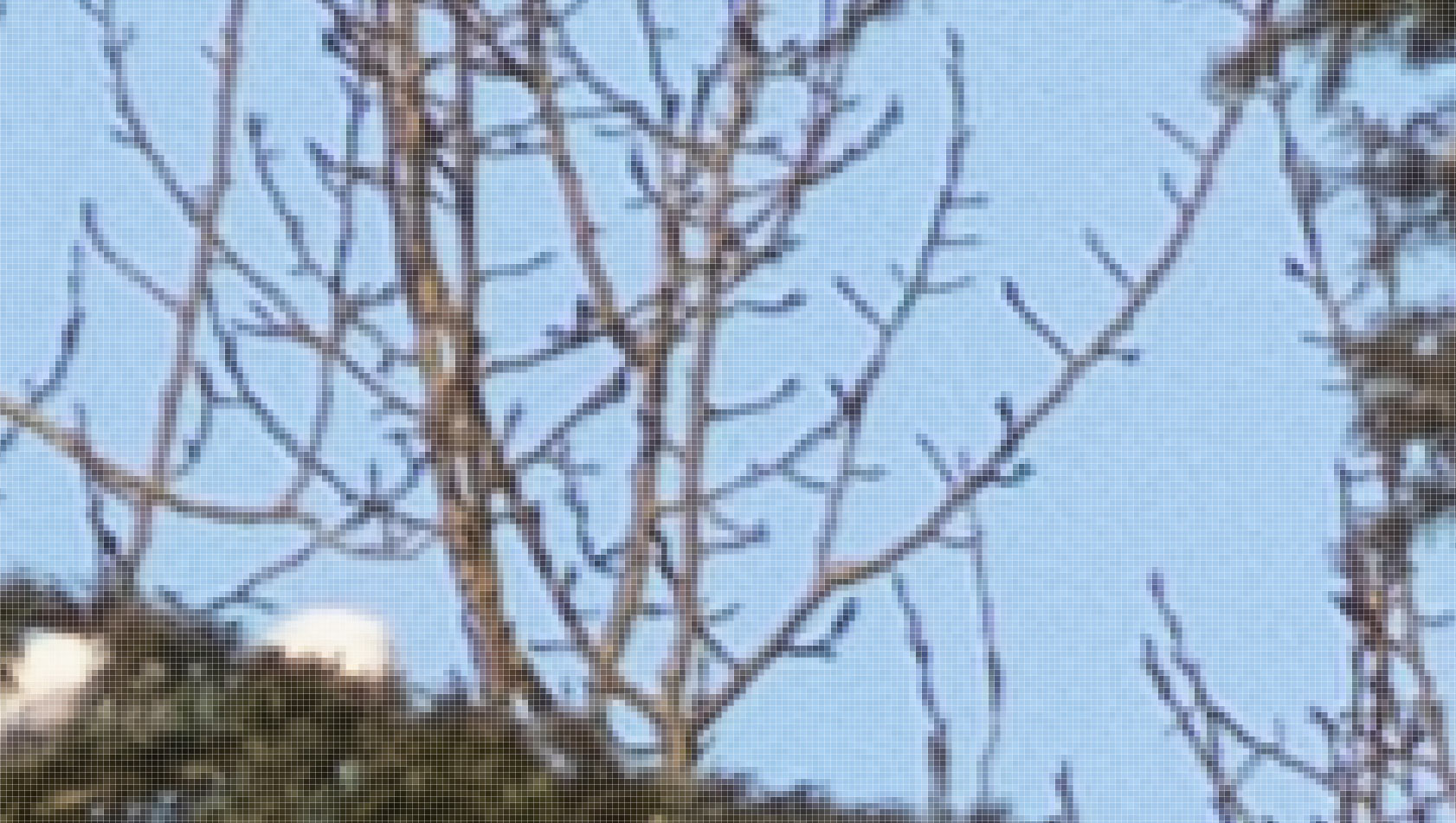 This is taken fron the extreme top left of the image and shown at 700%. Yes, 700%! The image is heavily pixilated BUT notice there is no color fringing and edges are sharp – in the corner of the image!

That is impressive! Now we have to go to the other end of the range and look at an image at 0.5 magnification. For this test I took a nice clean 10 euro note and put it in my light box. I used a tripod and stopped down to f/16. 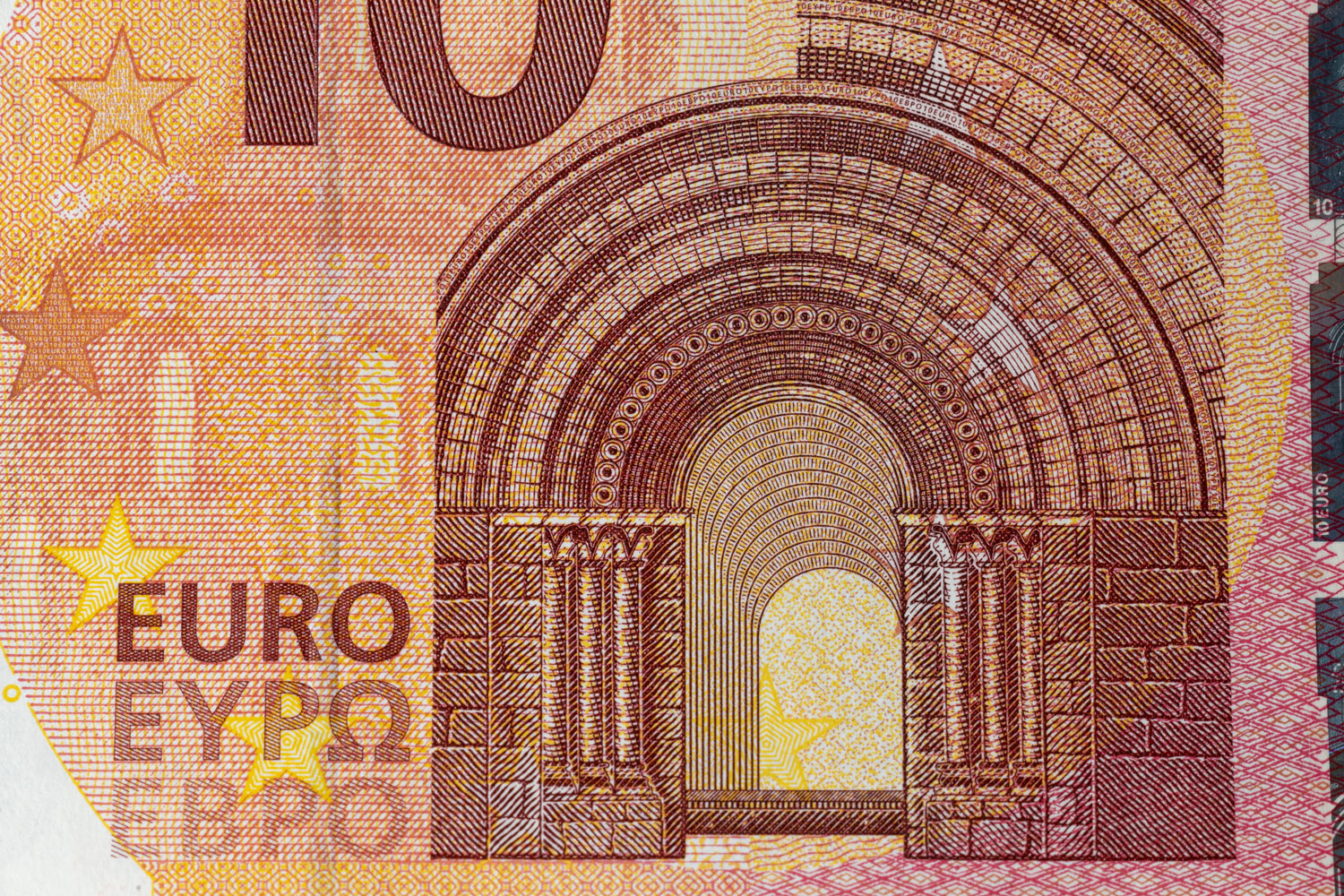 This is a full frame  image of the center of a 10 Euro banknote taken at maximum magnification with the lens set at f/16. 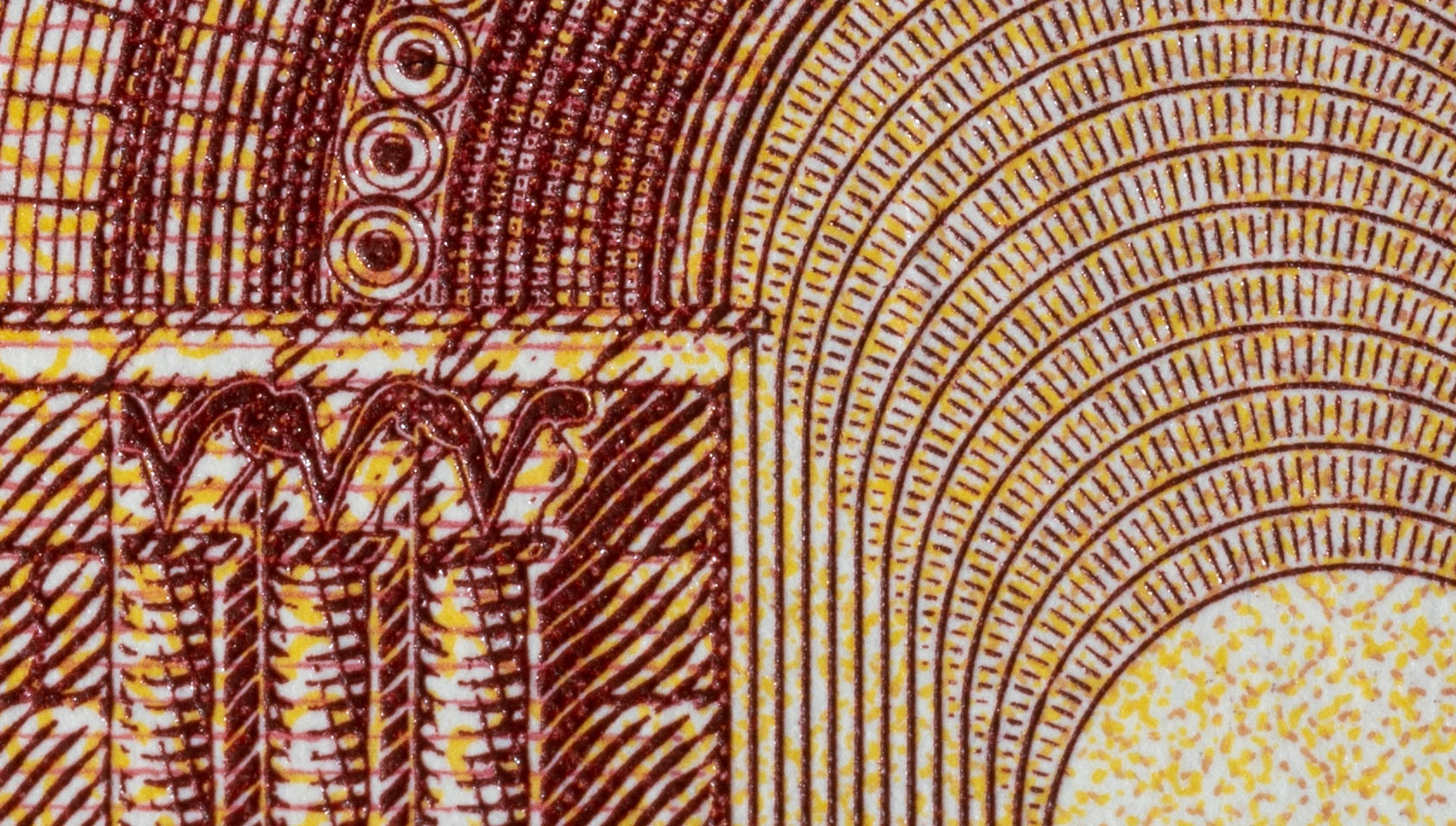 This is the center of the image rendered at 100%. 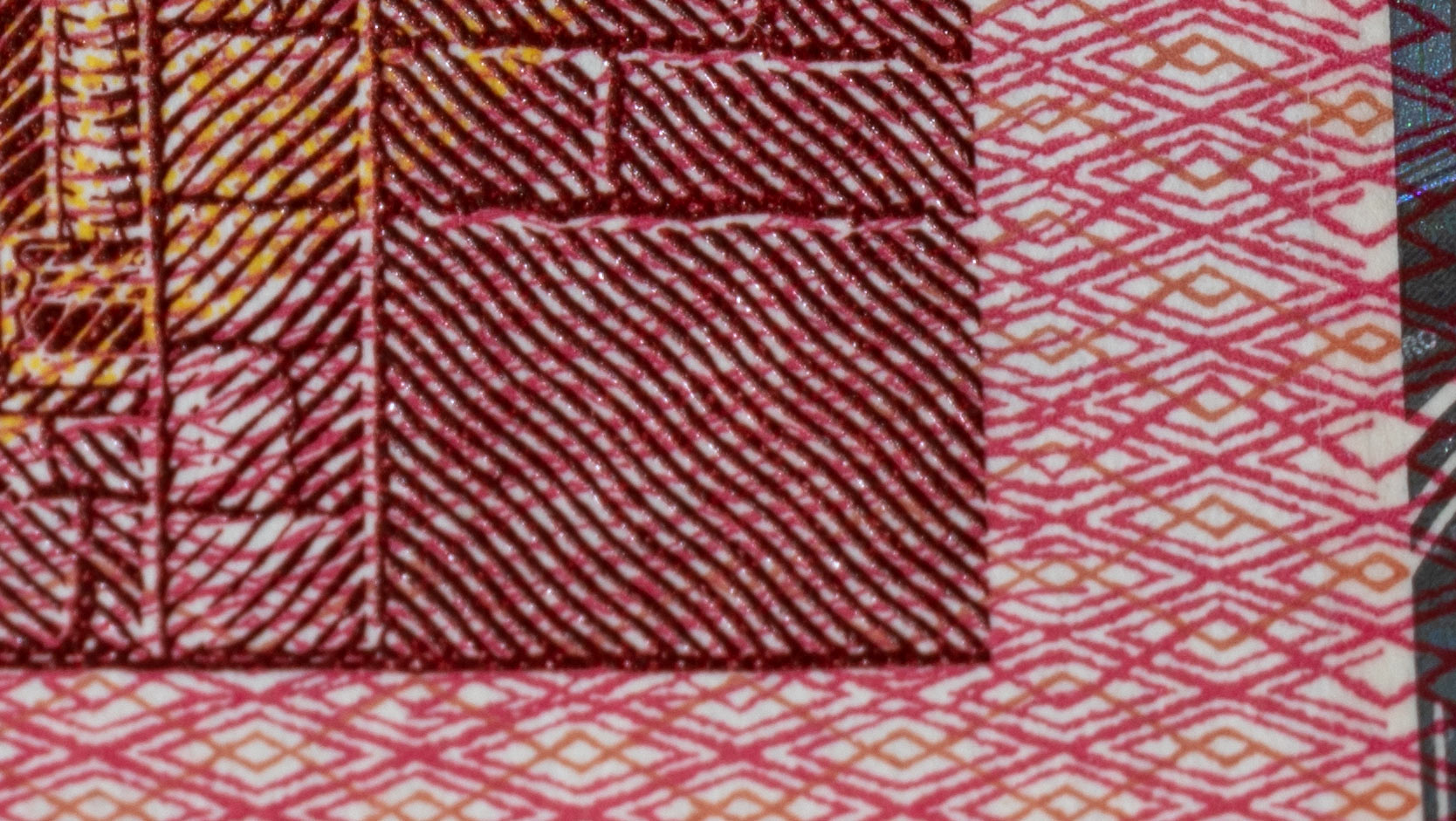 And this is the bottom right corner rendered at 100%.

I am impressed with this lens. It is not often I can see so little to criticize in the performance of a lens. Considering it was designed for use with film it is amazingly good. In addition to this wonderful performance, the lens is well built, solid, shows little evidence of plastic parts, and it is silky smooth to operate after fifty years in storage.

From my reading it appears that this lens is changed very little from the 100mm f/4 S.C. Macro and I suspect the performance of that lens will be on a par with this one. Well done Canon!