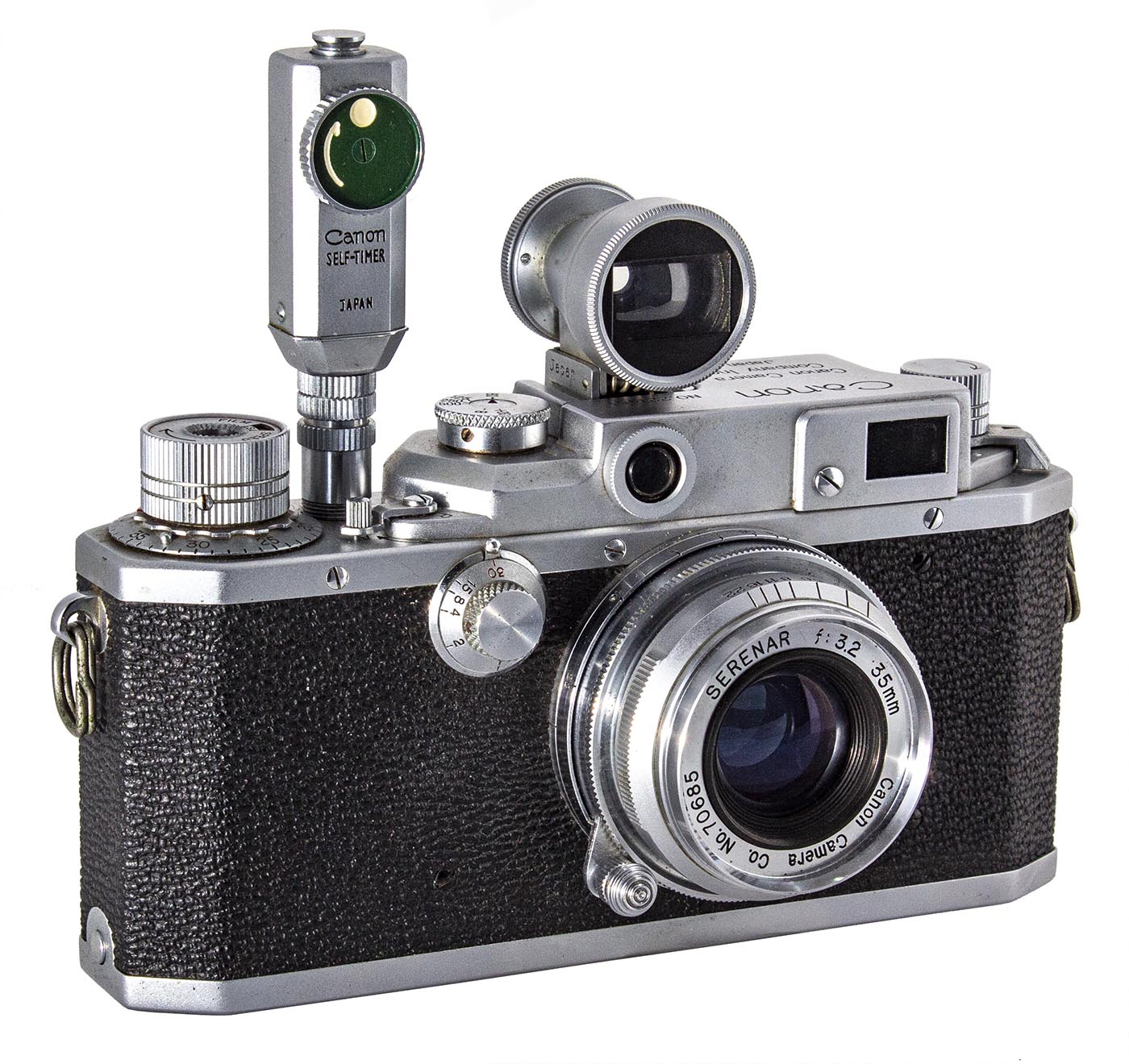 With the cameras comes a wealth of paraphernalia and we have to wonder what belongs in the Collection and what does not. I often buy a camera and it comes with the camera bag it was kept in. What do I do with the bags? They are certainly not part of my collection. A few I use but most are on my tables at the camera shows for a fraction of what they cost originally.

On the other hand, the camera on the left, a Model II D2,
has two accessories on it that are very much part of the Collection. The first
is the Canon Self Timer, the first model of several that Canon created before these devices were included in the camera bodies. The second is the 35mm viewfinder to compliment the 35mm Serenar lens on the camera.

There seems an endless variety of camera add-ons created by Canon to extend the usefullness of their cameras. But very little attention is paid to these devices, especially the little things like the Self Timer above. Information on the Internet is scarce and E-bay, when it offers these items, does not include a great deal of information about them.

One source of information I have is my growing Library of Manuals and Catalogs which do list what is available for the cameras being described.

We are going to try and sort all of this out here and offer as much information as we can find. This will be by no means an authoritative description but simply what I learn as I go along. And remember, this website is really just my working notes for my collecting. It may often be wrong or incomplete. Have patience. And if you have something to contribute, contact me!

I am dividing illumination into two sections: Flash units and Strobes. By “Flash” I am referring to artificial light provided by flash bulbs. Most younger photographers today don’t remember flash bulbs but us old timers do, for sure. We should define a few terms before going any further:

Flash Syncronization or simple Flash or even just Sync refers to the means by which the flash is fired to illuminate a scene. We take this for granted in this day of automatic strobes and built in flashes that pop up when they are required. But it was not always so easy.

There are types of synchronisation. You didn’t think this would be simple did you?

X Sync – This signal will fire the flash or strobe when the shutter is fully open and all of the film is exposed at once. Advanced cameras have an indicator showing the maximum speed at which this occurs. We want this speed to be as high as possible because it is used to control the background ambient light and the higher the speed at which this occurs the more control the photographer has over the light.

X stands for Xenon which is one of the inert gases used in strobe flash tubes. When the sync signal is received a high voltage field is applied to the gas in the tube to ionize it which makes it conductive and allows the full flash charge to race through the tube from one end to the other. As the current passes through the tube it excites the gas which produces photons of light for as long as the current flows.

This setting is suitable for strobes only as it does not fire in advance of the film being exposed. As a result a flash bulb would likely not reach full light output in time to illuminate the scene and expose the film.

S, M and F Sync – these are specific to flash bulbs. The bulbs themselfs have a rating, S, M, or F.  The initials simply stand for Slow, Medium and Fast. Unlike a strobe which fires almost instantaneously a flash bulb produces light by burning magnesium wire wool in the bulb. It takes time for the burning to spread and the bulb produce maximum light. So the bulb is fired slightly before the shutter is fully open to give the bulb a chance to catch up.

M bulbs were the most common class of bulb and they took 20 to 25 milliseconds to reach full brightness.

FP Sync – is again specifically applied to FP flash bulbs. Some special bulbs were made to burn for a longer time. In this way, they produced light for the full time the focal plane shutter is in motion. In this way the photographer is not constrained by the speed at which the film is fully exposed. At very high speeds the film is exposed by a slit formed by the first and second curtains as they travel together across the focal plane. The long burning bulb produces light through out the time it takes for the shutter opening to cross the film. Again, the signal is given slightly before the shutter begins to travel to give the bulb a chance to get burning.

FP bulbs took about 30 to 35milliseconds to come to full brightness and gave reasonably constant illumination for 25 to 30 milliseconds.

The PC Socket is a plug on a camera for attaching a flash or strobe. It was invented in the 1950’s by two German’s, Gauthier and Deckel, who were involved in the manufacture of leaf shutters in lenses. The name derives from Prontor/Compur, a shutter manufacturer, who adopted this as a standard connection on its shutters. Eventually it became a world standard connector.

Today this connector is seldom seen except on older cameras or modern professional ones.

And then we have the hotshoe which is the way most modern cameras sync with an external strobe. Not all modern cameras have a hotshoe. The first F-1 did not have one (it could sync with a strobe but that is another story) . The Canonflex did not have one either. And some cameras had an equipment shoe for mounting a flash that used a PC socket, or a light meter, or an external viewfinder. There is much that needs to attach to a camera that does not require a sync signal.