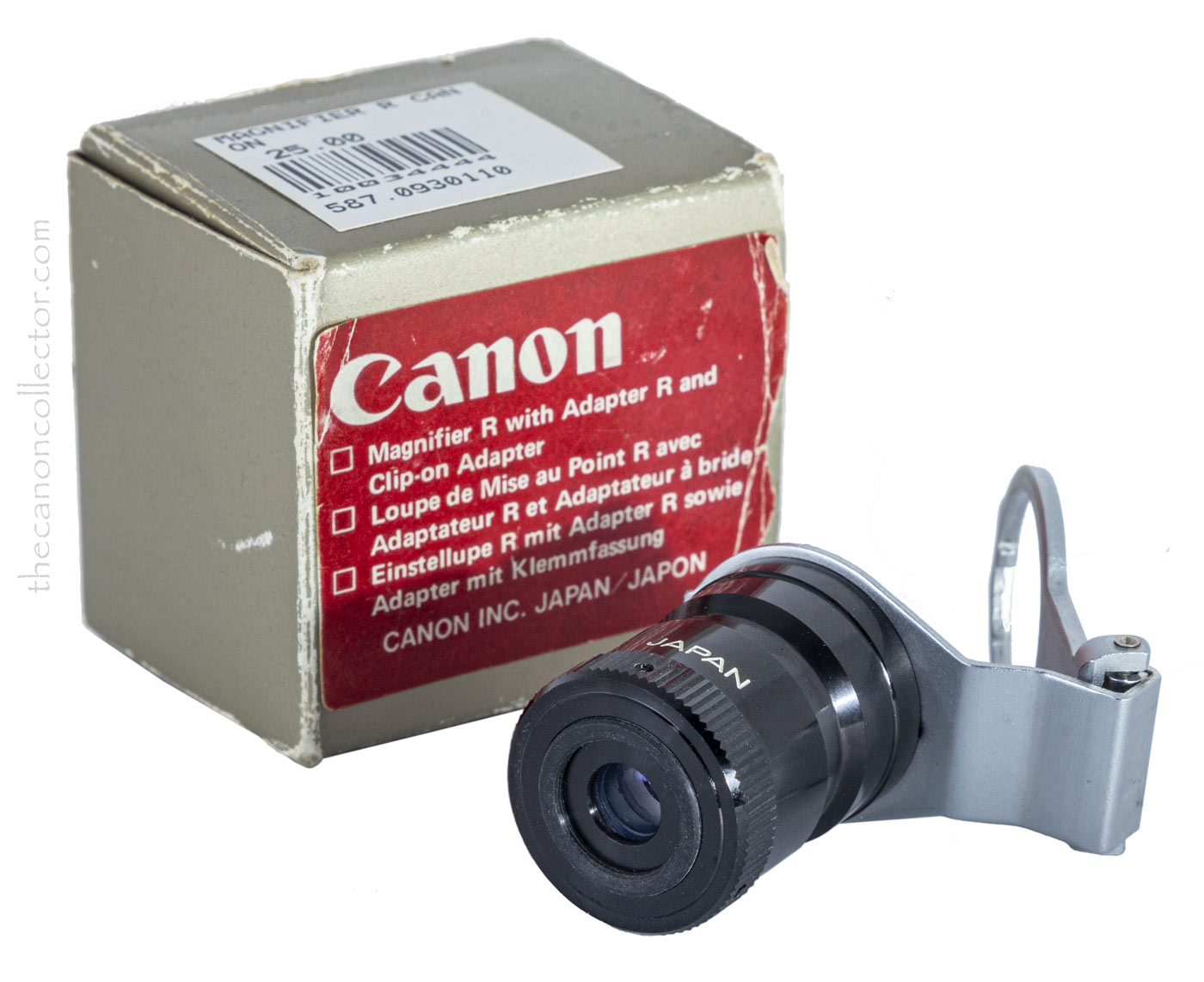 The Canon Magnifier is a magnifying eyepiece of 3 single elements which magnifies the central portion of the focusing screen by a factor of 2.5. It was designed for precision focus closeup work such as
copying and archiving. It can also
be useful with wide angle lenses
that can be difficult to focus
because of the wider depth
of field.

The eyepiece rotates to adjust
the focus and accommodate
different eyes.

The Magnifier came in two
versions, one with the “S” adapter and the other with the “R” Adapter. The adapter attached to the eyepiece of the camera 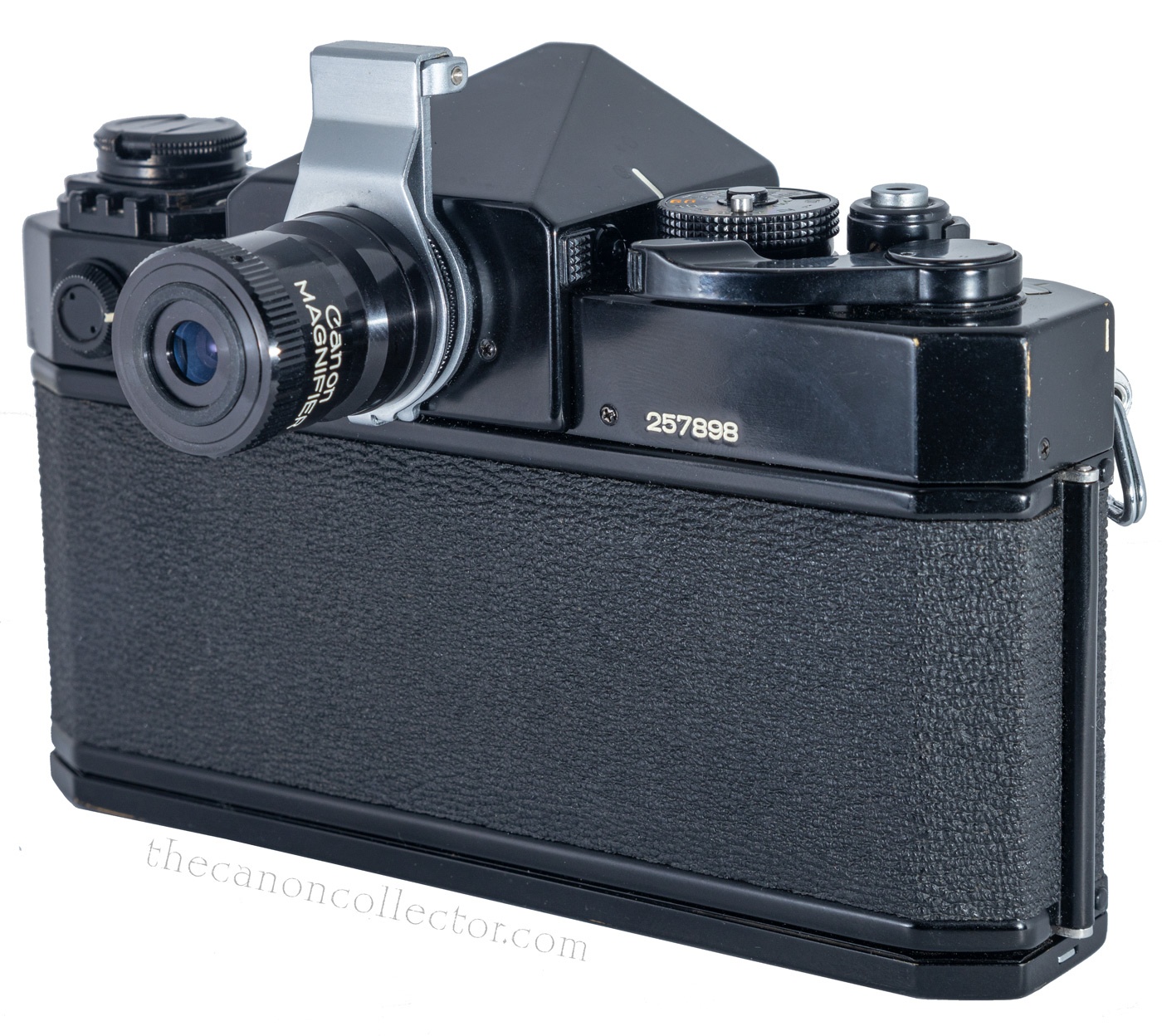 To mount the Magnifier R on the F-1, as here, the eyepiece ring screws off, the Adapter R is placed over the frame and the ring is screwed back on. 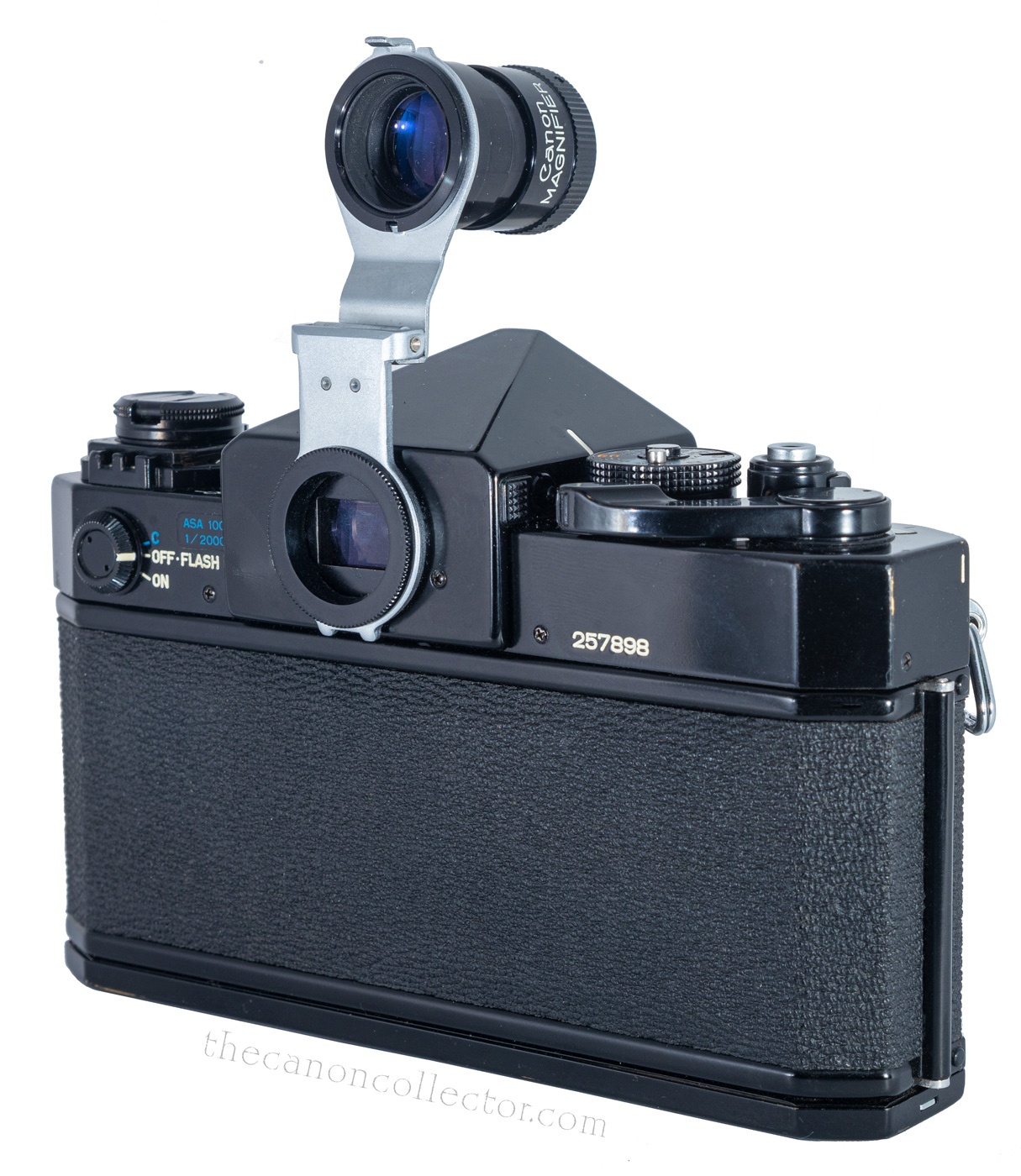 With the Magnifier in place you cannot see the whole focusng screen to compose the image. So the Magnfier is designed to flip up out of the way for a complete view.

and had a hinge that allowed  the eyepiece to flip up for a regular view through the view finder. The Magnifier was the same regardless of the version and had no model identifier on it. It simply said “Canon Magnifier” and “Japan”. However, Canon referred to the “Magnifier R” and “Magnifier S” depending on which adapter it was on. But  the same Magnifier unit screwed into the two different Adapters.

The Adapter “S” works in exactly the same way as the “R” but it has a square mounting clip which slides down over the square plastic eyepiece of any of the “A” series cameras. I don’t have one yet to play with but I am sure it mounts on other SLR’s as well.

Because the actual Magnifier would screw out of the Adapter it was possible to buy the Adapters separately so that one Magnifier could be used with both the Adapter “R” and “S”. This obviously allowed maximum functionality at minimum cost.

The Magnifier comes with a simple Instruction Sheet in several languaages. However, the device is so simple that the Instructions are not much additional help 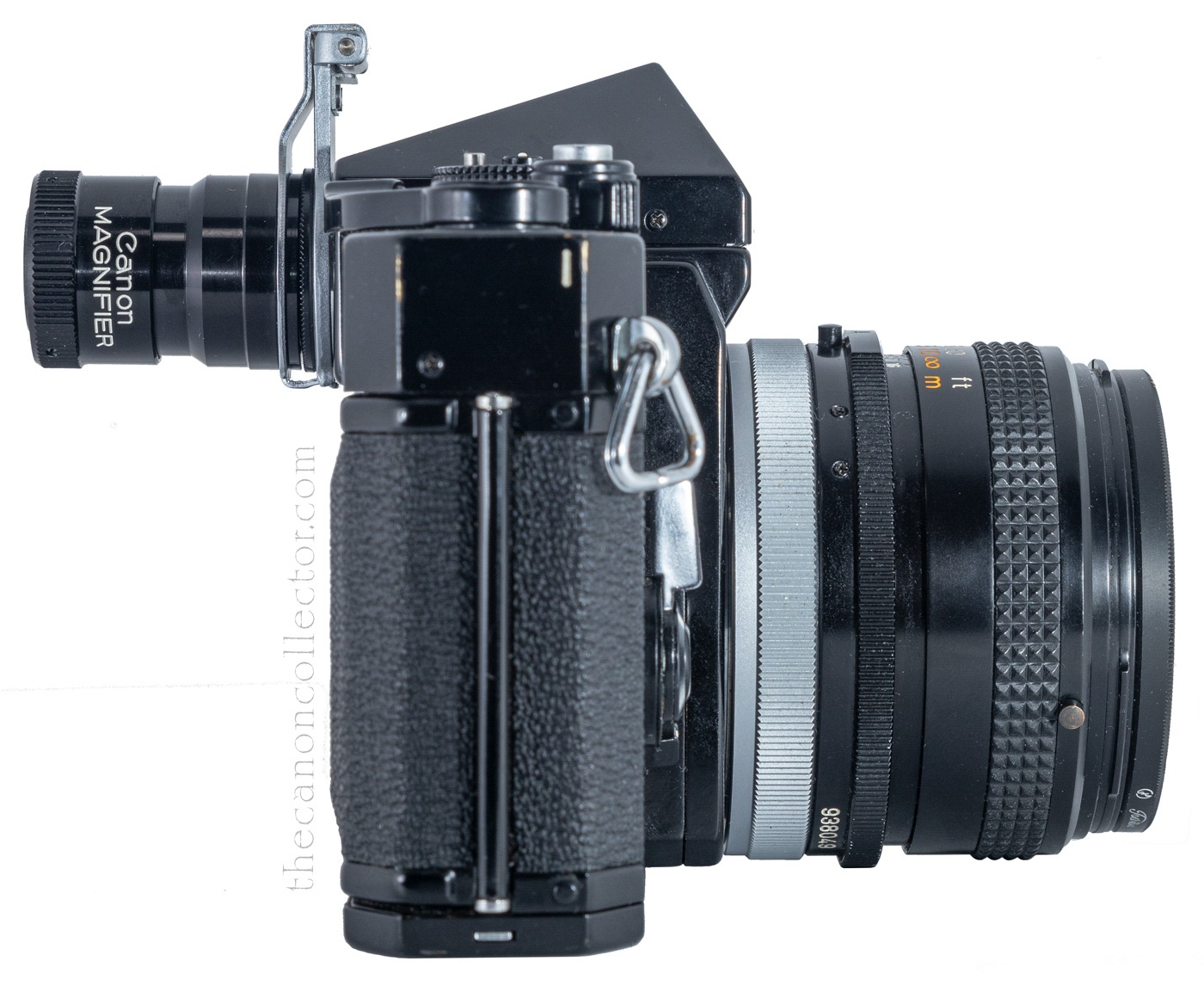 Seen from the side one can see how far out the magnifer projects. The optics are such that the eye position is critical and this can make the Magnifier difficult to use, especially when the camera is mounted vertically. 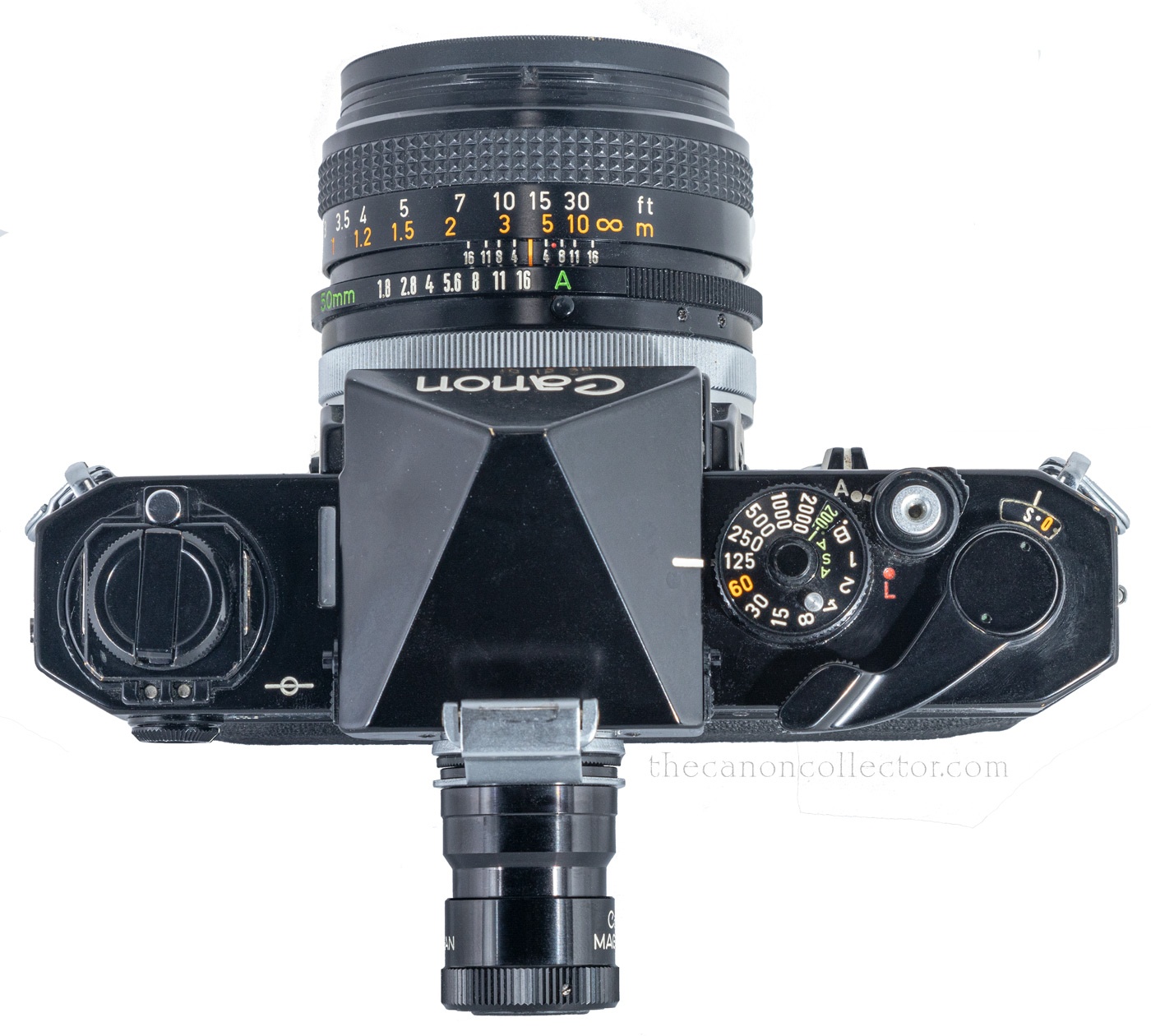 The Magnifier R mounted on my F-1 seen from the top.

This is the Magnifier on the Adapter “R” for use on SLR’s with round eyepieces, i.e. the F-1 and F-1n.

This image of the Adapter “S” shows the square mounting clip. 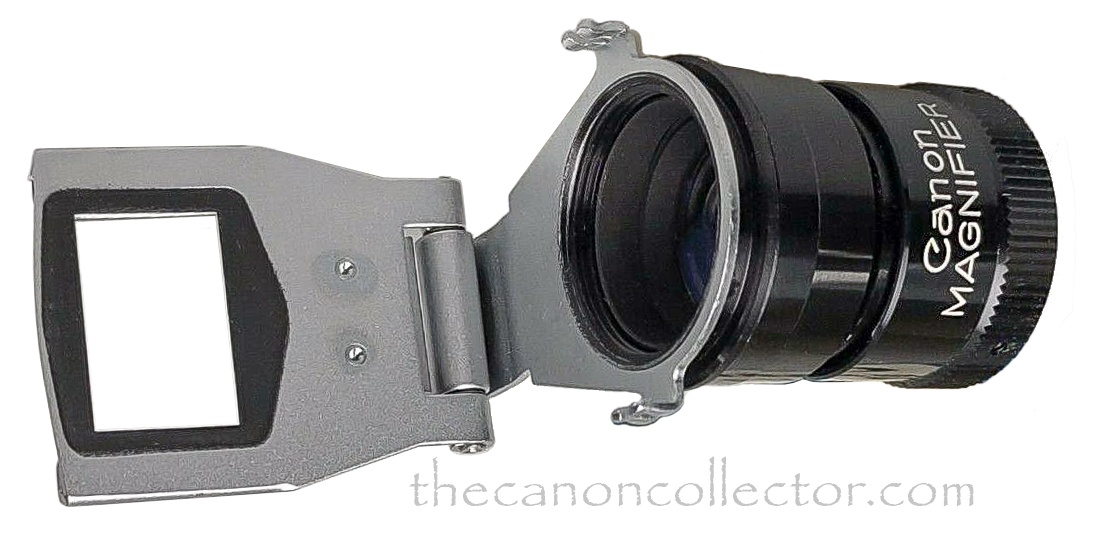 The Adapter “S” swings the Magnifier up just the same as the Adapter “R”. 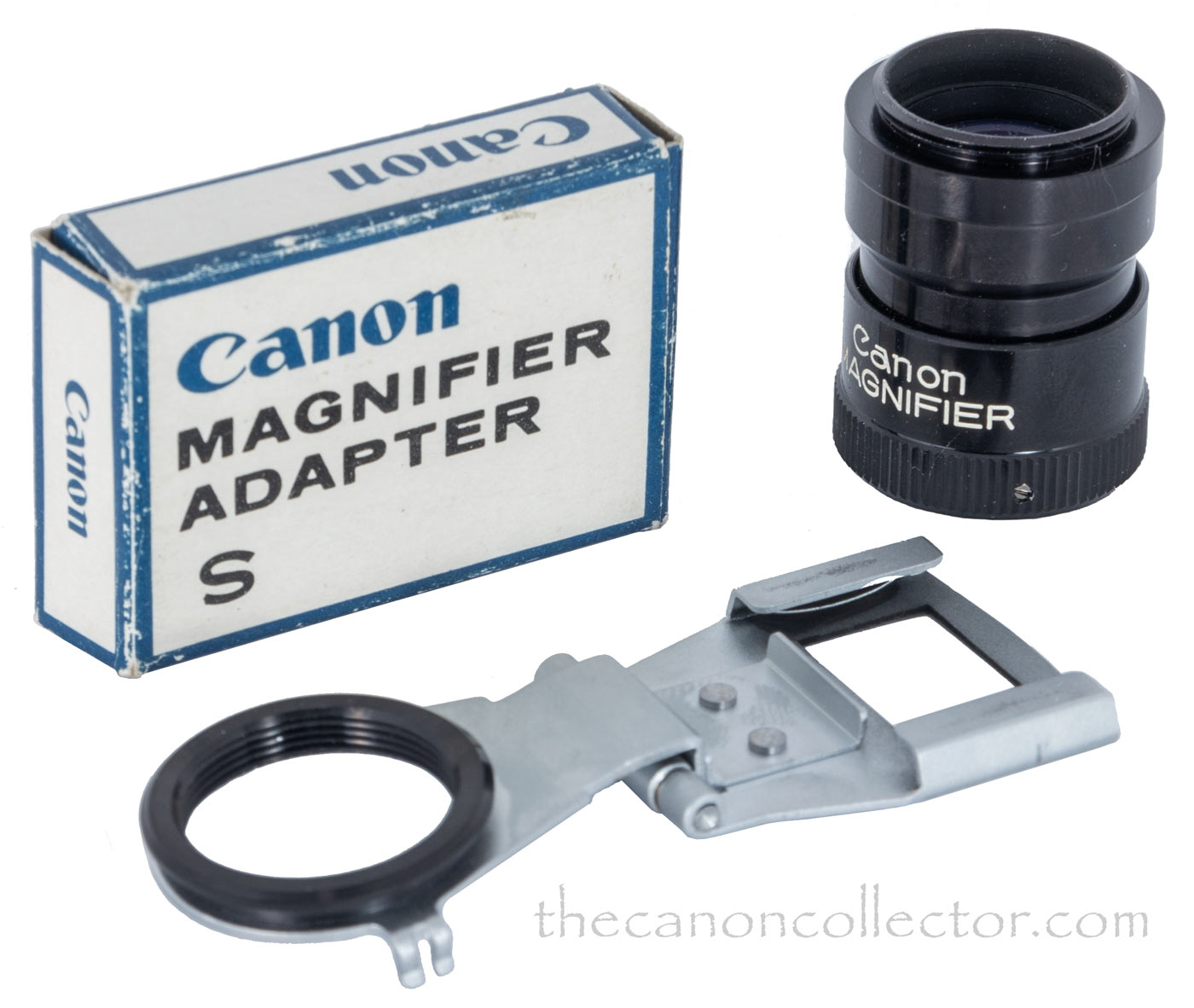 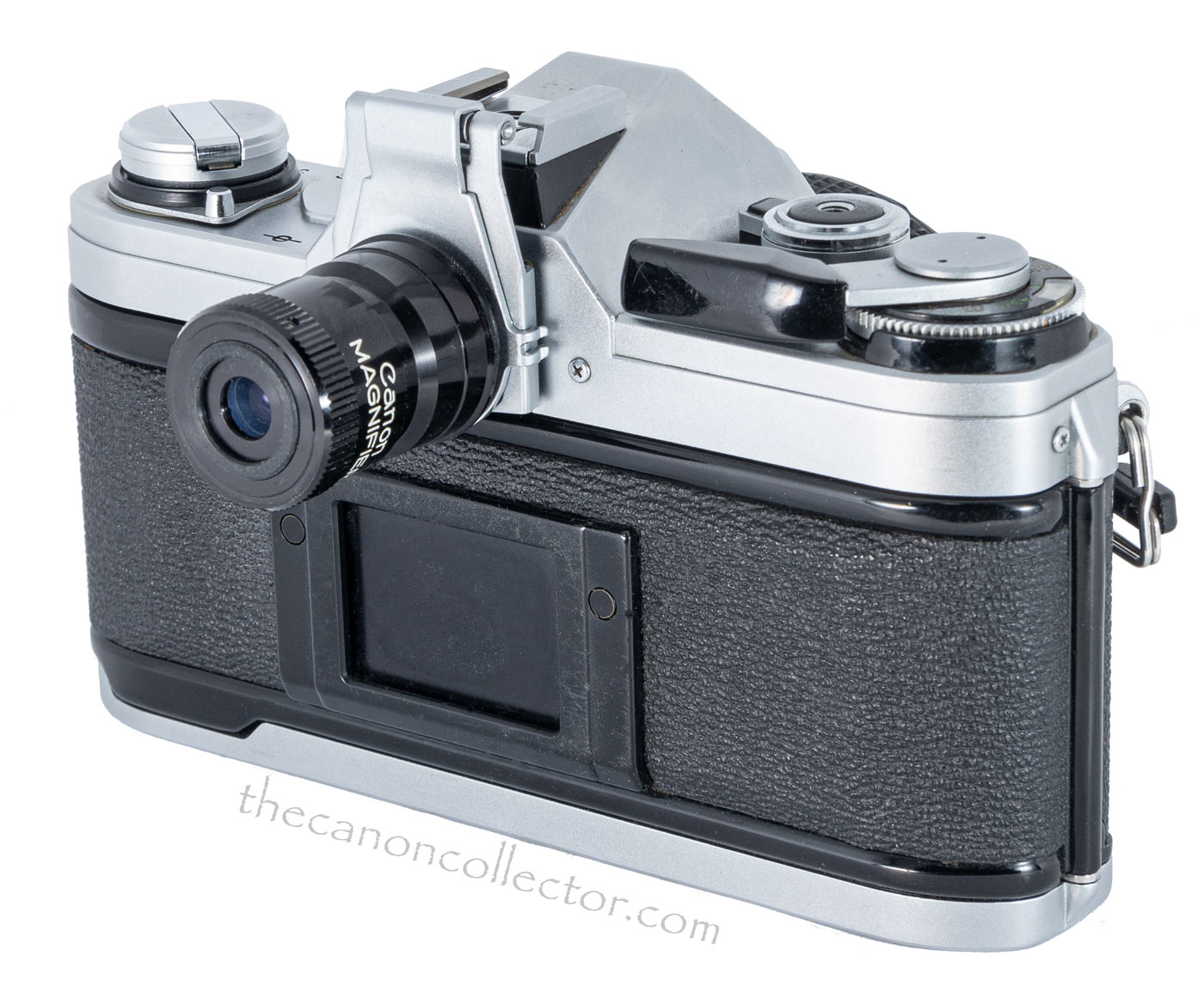