The Canon F-1 and the F-1n have no hot shoe or equipment shoe to mount a Flash Unit or Speedlite. However, on the left end of the top deck there is a PC Shoe for flash sync. There are also sync connections in the collar that surrounds the rewind crank.

That collar around the rewind crank also contains rails into which the user can insert a “Flash Coupler”, a device that adds a hot shoe to the left side of the camera.

Simple devices that extend the capabilities of the F-1 system, we will look at them one at a time. 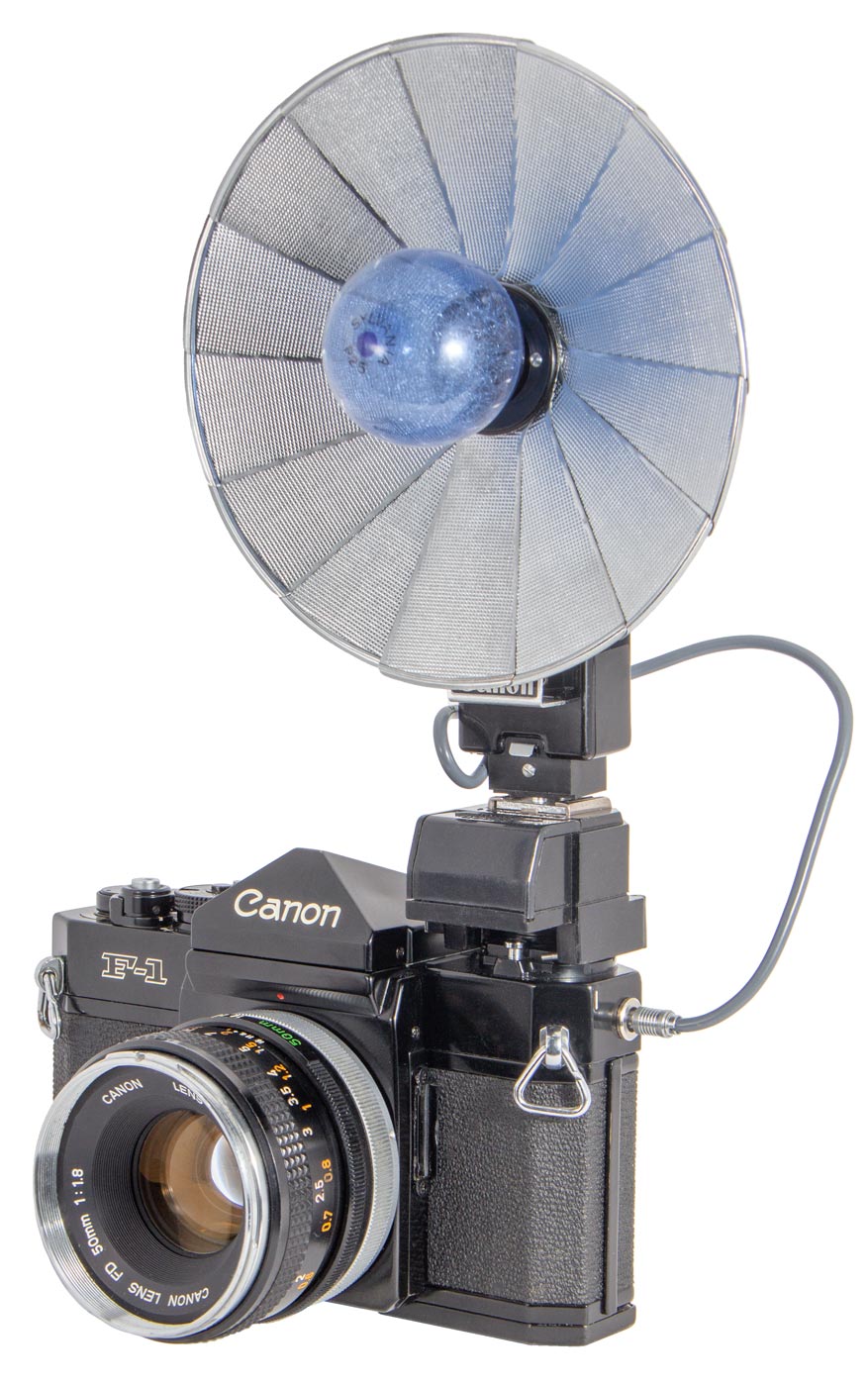 The F-1 has no hot shoe, or equipment shoe of any kind. However there is a PC Socket on the left end of the body and two electrical contacts for flash sync located behind the collar around the rewind crank. 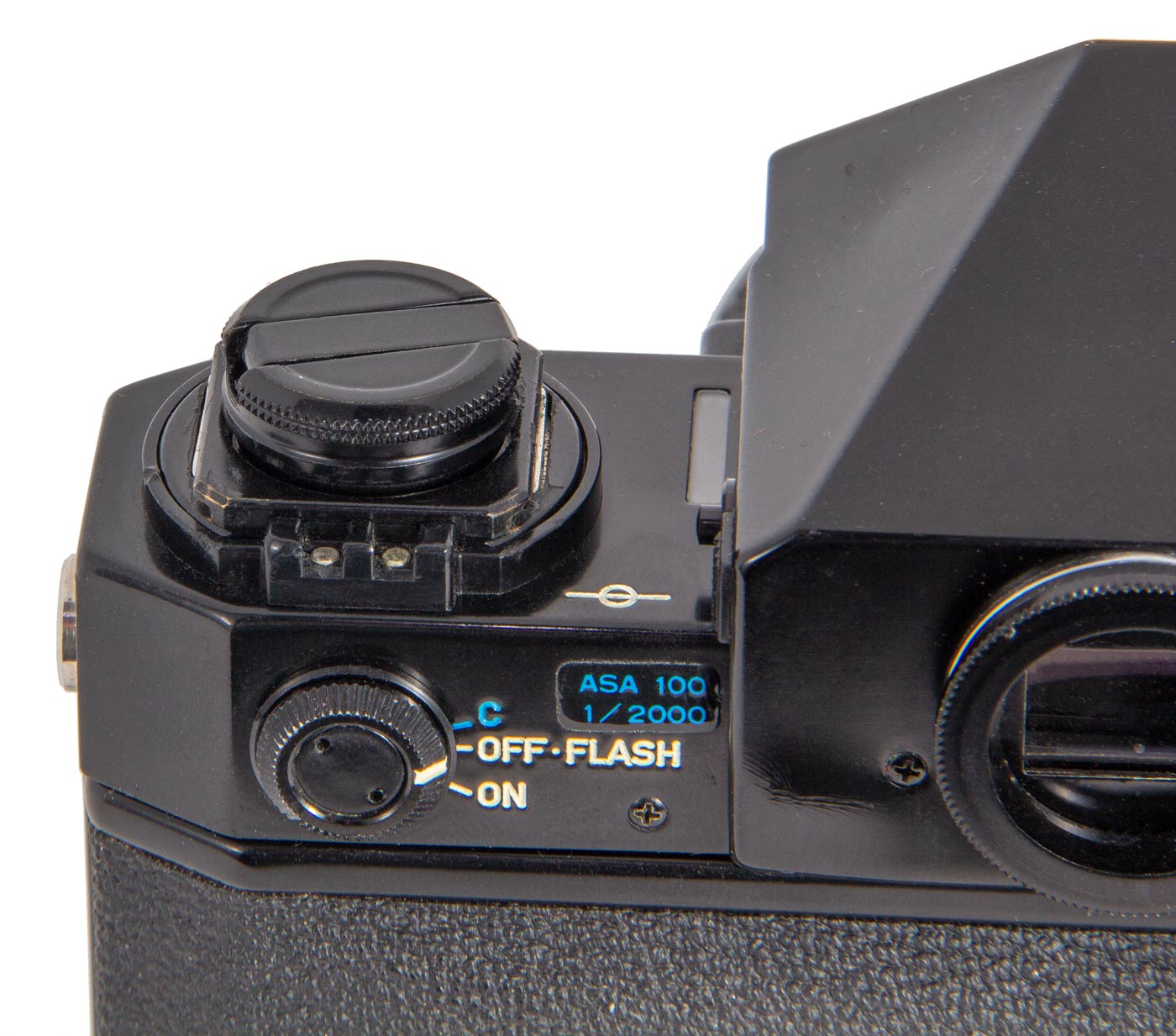 Looking at the rewind crank from the back the two sync contacts are visible as small metal pins on the back of the crank pedestal. 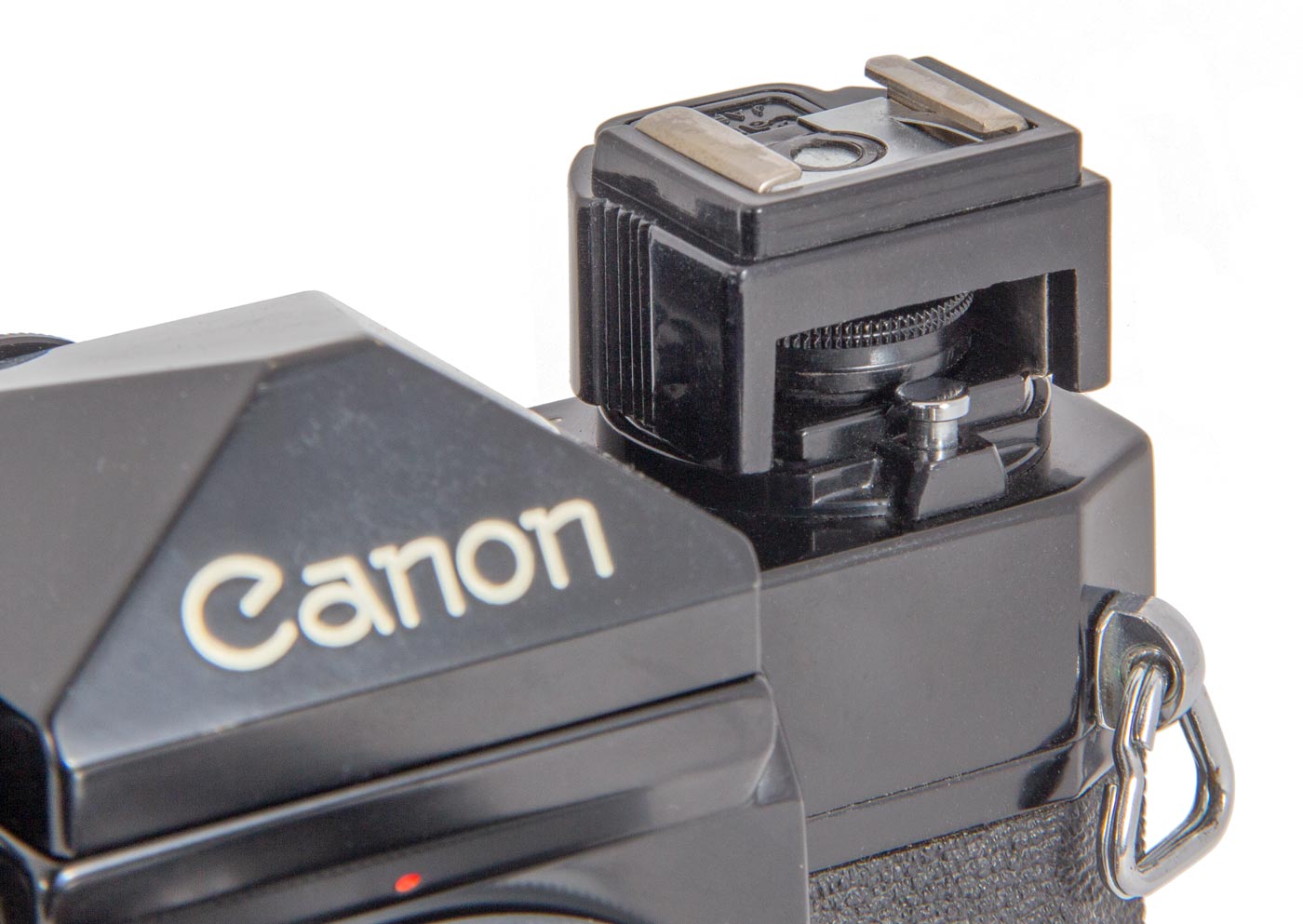 The Flash Coupler D slides on, from the back, over the Rewind Crank. It sits over the rewind crank while in use however, it must be removed for film loading or unloading.

The Flash Coupler D has no lock so it relys on a friction fit to stay securely on the camera. This is a good tight fit on my camera but I don’t know what happens with considerable wear and tear.

Because this Flash Coupler sits over the rewind crank the camera cannot be opened and film cannot be rewound with it in place. It must be removed to load or unload film. 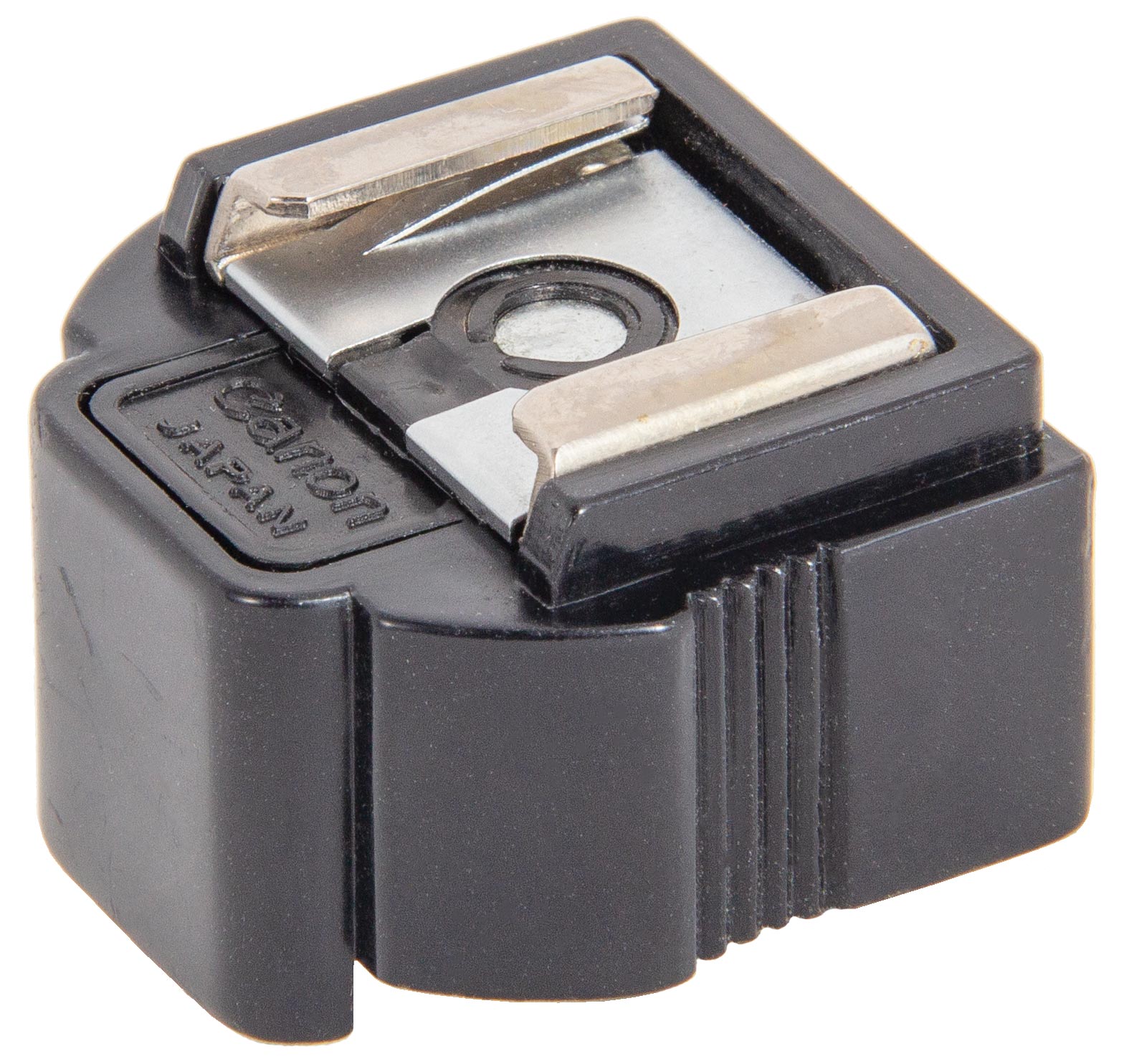 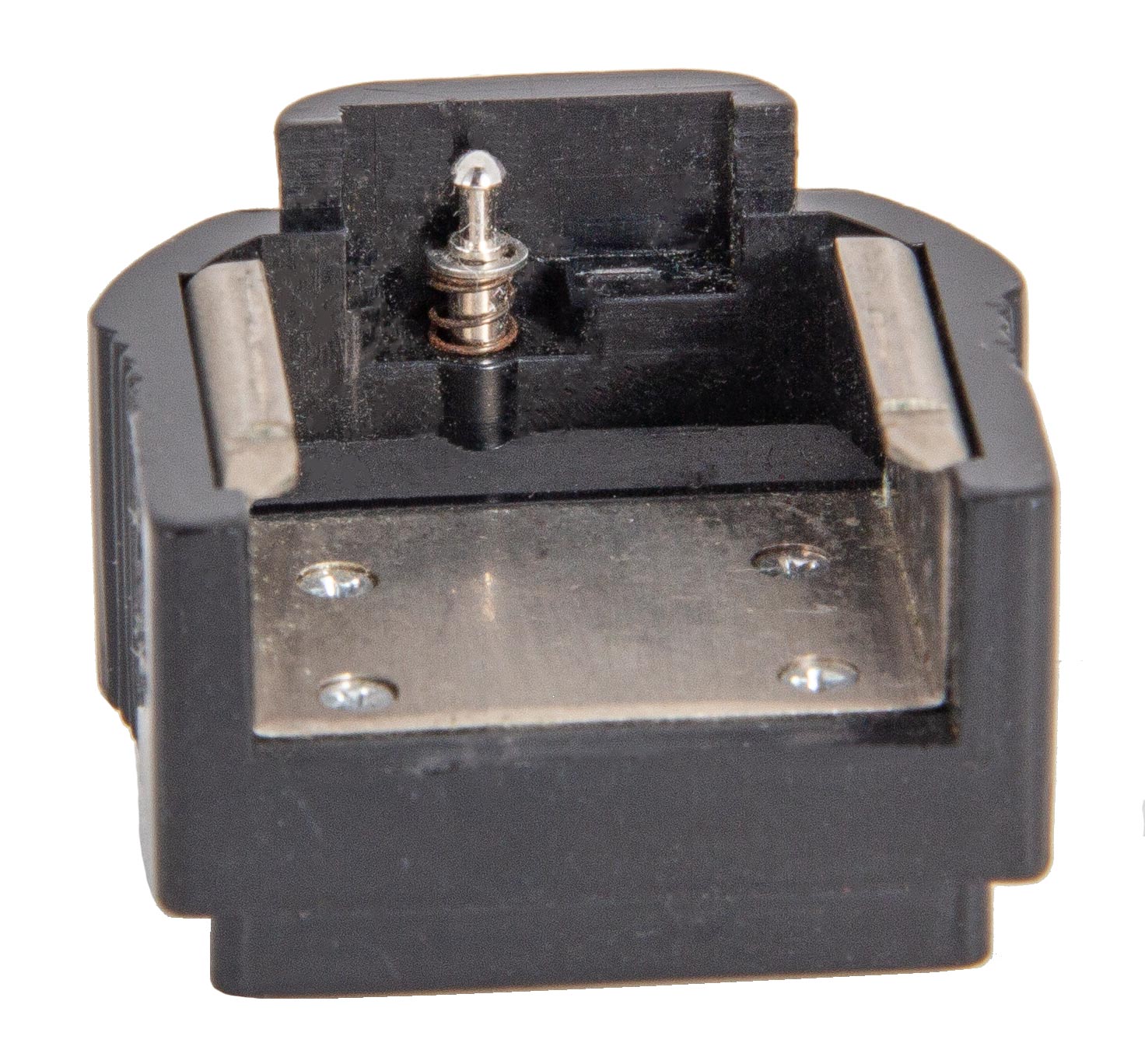 Looking at the bottom of the Flash Coupler we see this unit has a metal mount for durability. The single electrical contact is visible 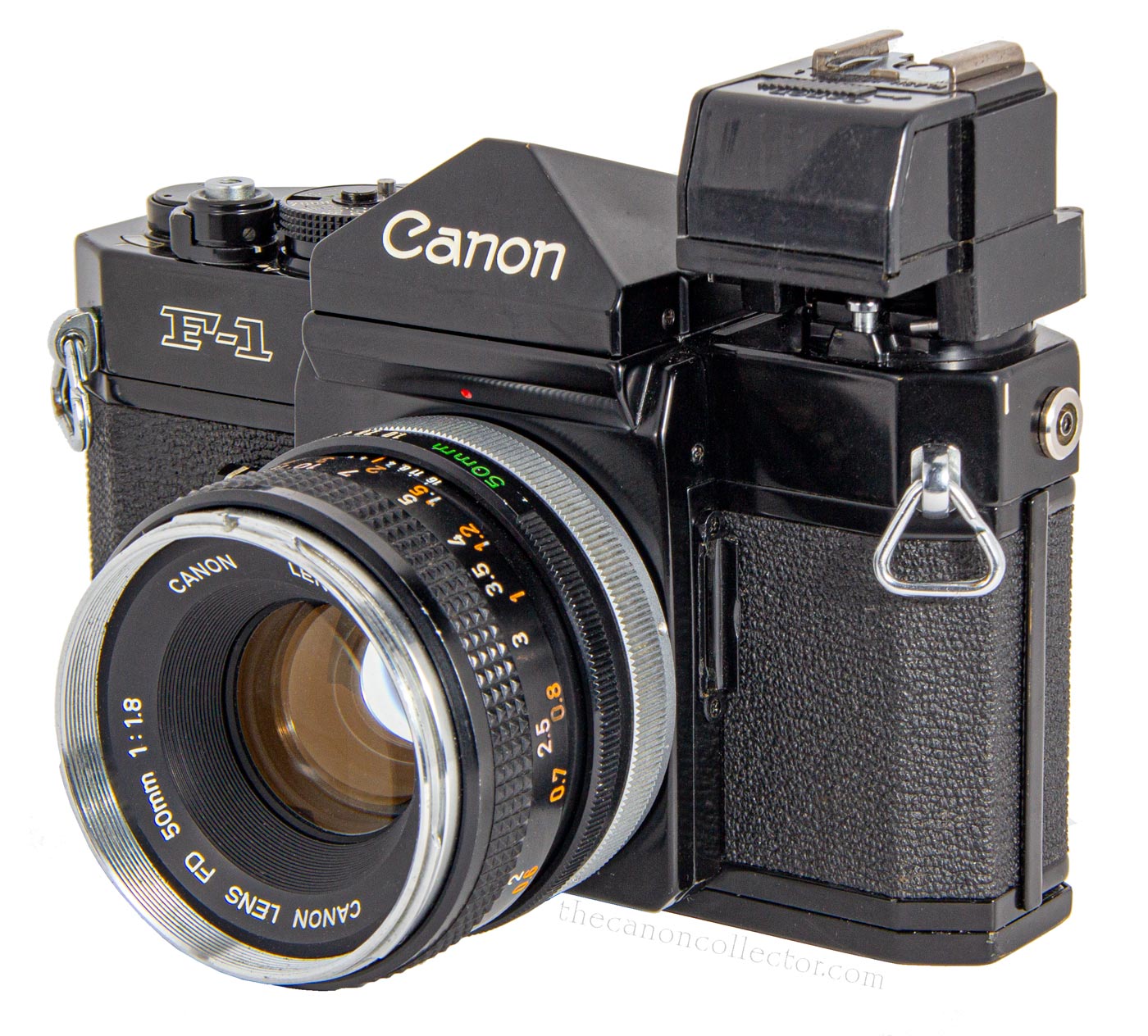 The Flash Coupler L slips on over the rewind crank on the F-1 just like the Coupler D does. But the size difference is immediately obvious.

Canon created a system to adjust for this variation in charge which they called their CAT (Canon Auto Tuning) System. The 133D strobe unit was designed to report the capacitor charge to the camera exposure metering system so it could adjust the meter reading to compensate for it. The Flash Coupler L was designed to take advantage of this sytem when using the 133D Speedlite.

The Coupler L slides over the rewind crank in the same way as the Coupler D. It is larger physically because Canon has added two features to this unit which has required the addition of two batteries to power them.

The first new feature is a light bulb to illuminate the meter needle visible in the view finder. Normally the 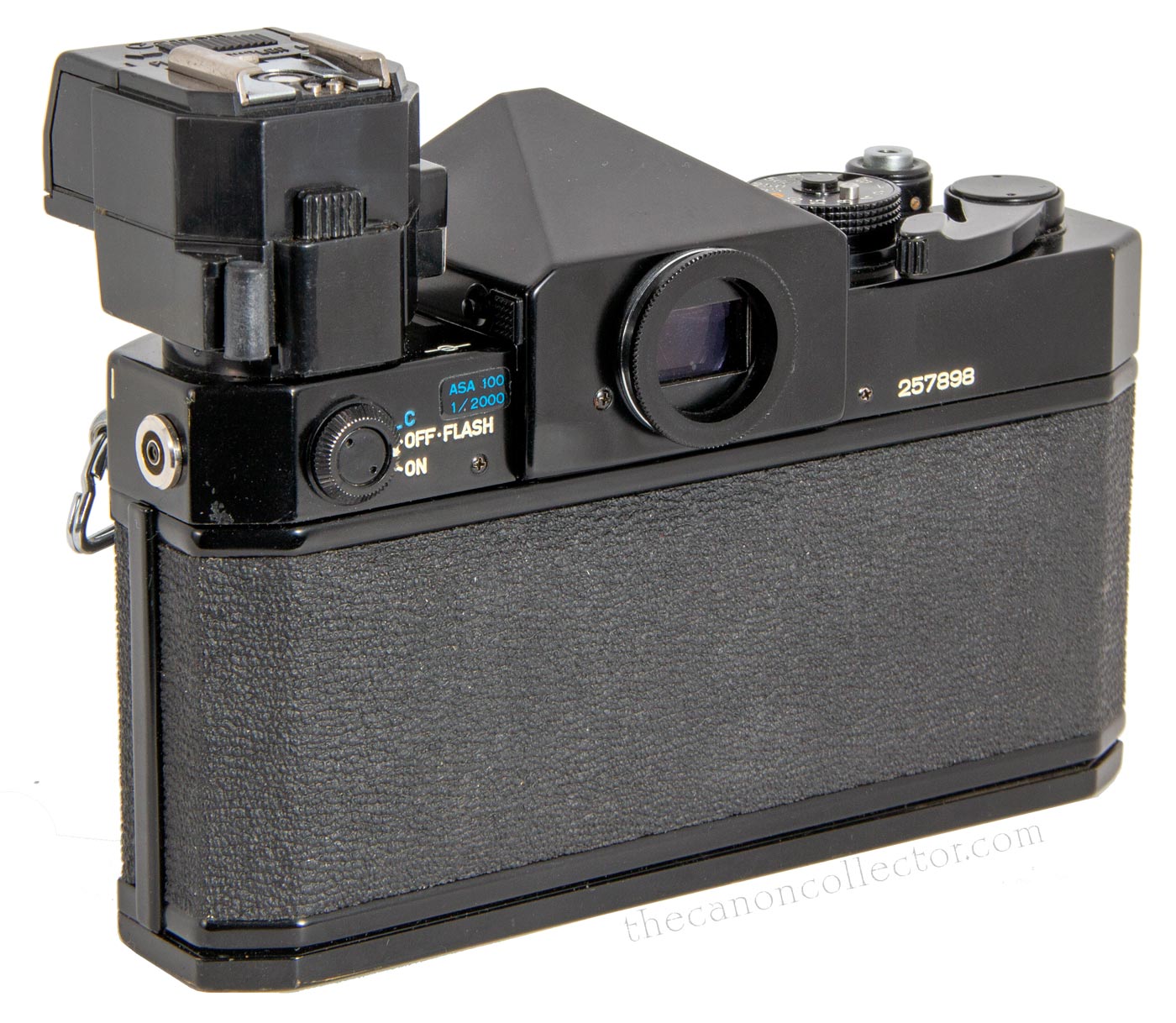 The Flash Coupler L slips over the rewind crank from the rear. On the back is the switch to turn the meter needle illumination on and the lock handle for locking the unit on the camera. 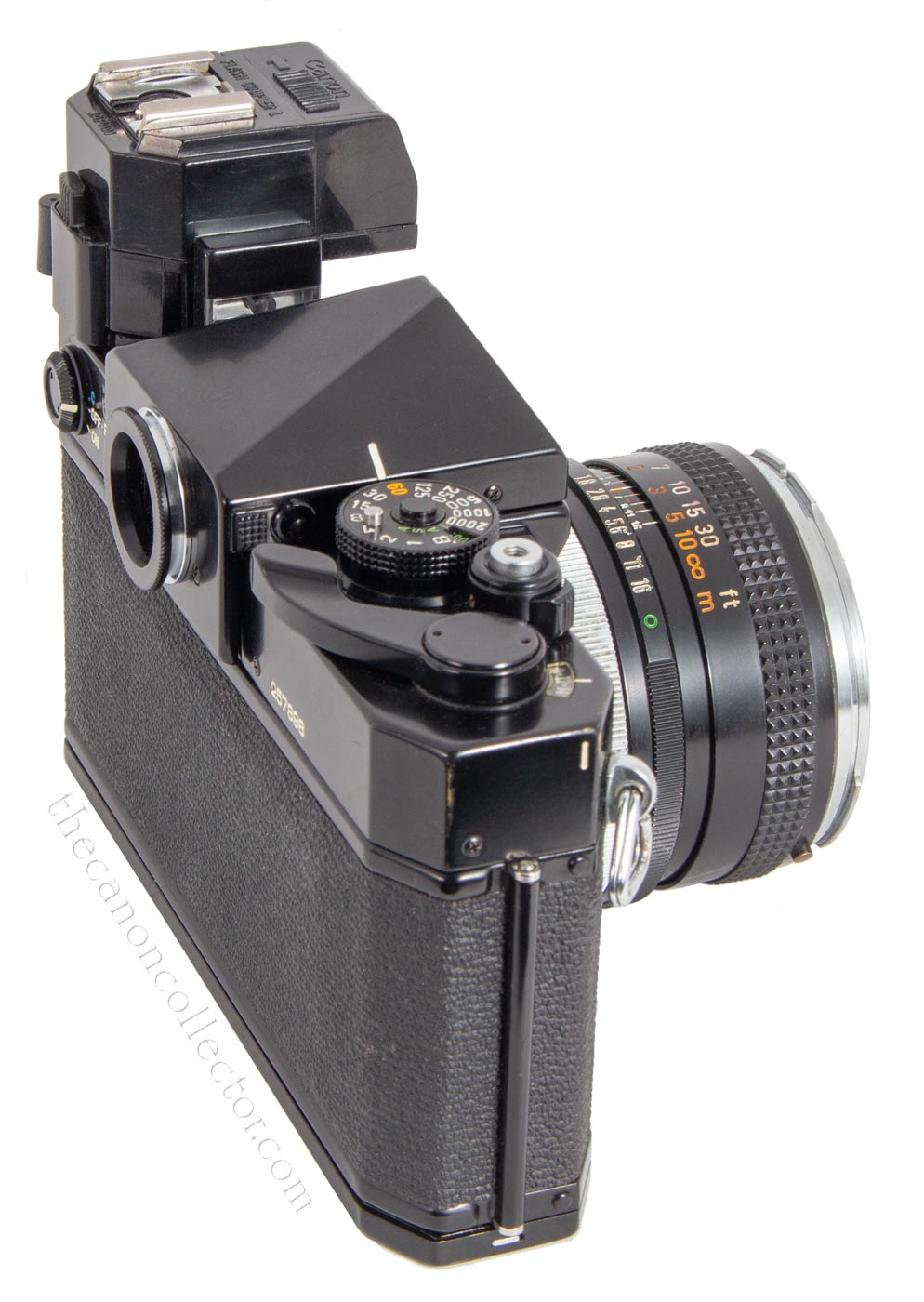 The Coupler L extends further forward than the Coupler D and that is where the two batteries that power it are stored. 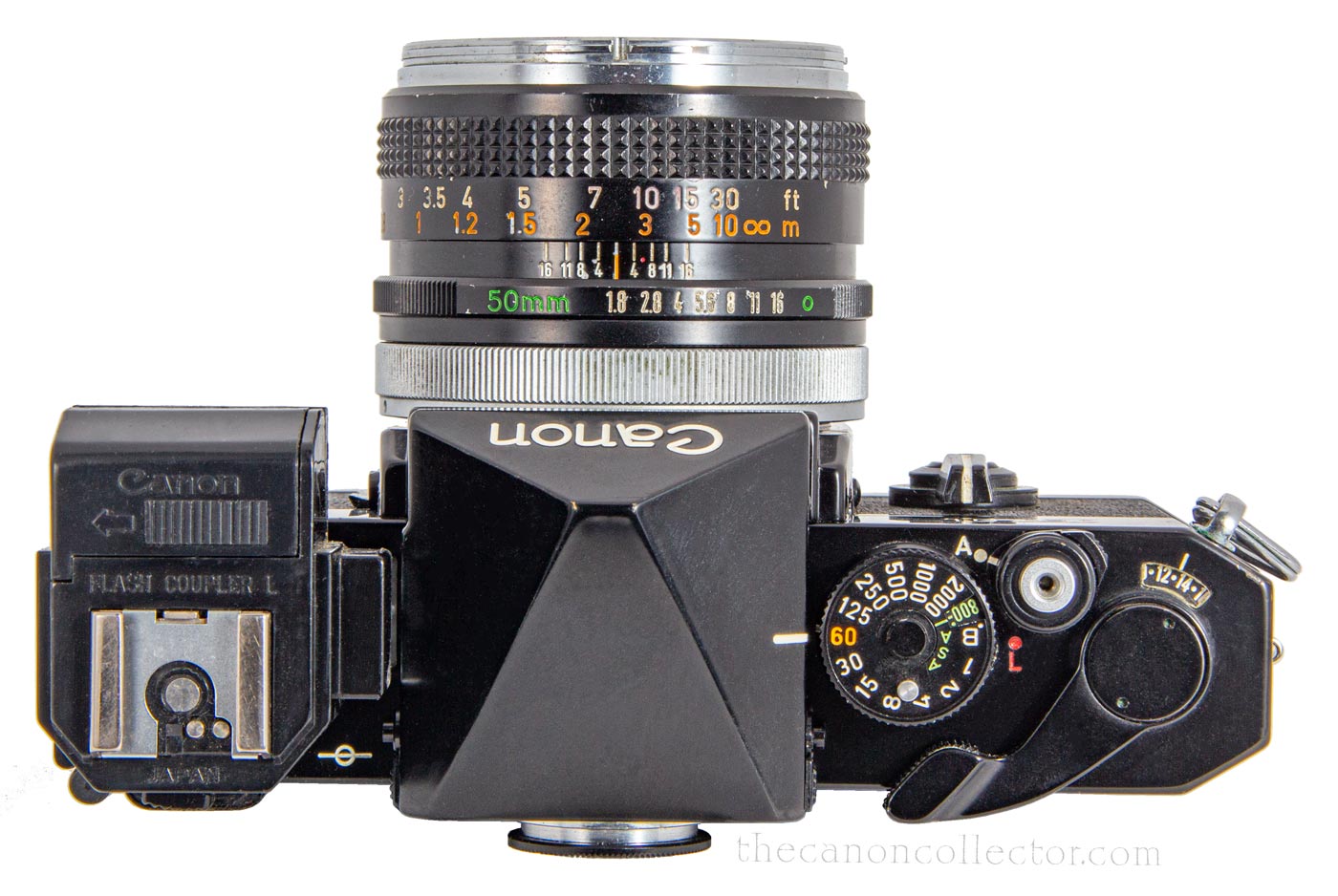 From the top you can see how far the Coupler L reaces forward. Looking on the top of this extension you can see that it opens to load the two batteries that power the Flash Coupler L. Notice too the two flash contacts in the hot shoe.

needle is illuminated  by ambient light entering through a window on the top deck lying beside the left side of the pentaprism. An extension on the right side of the Flash Coupler L which contains a small light bulb. This projection sits out over the window and the light bulb shines down into it. The result is that the meter is illuminated regardless of light conditions around the camera. There is a slide switch on the back of the coupler to turn the bulb on and off.

The second battery powers the CAT system. The functioning of this method of exposure compensation we will cover when we have a look at the Speedlite 133D. It is complex and not often encountered. Because of the improvements in flash systems it is unlikely you will ever need to consider using this system. 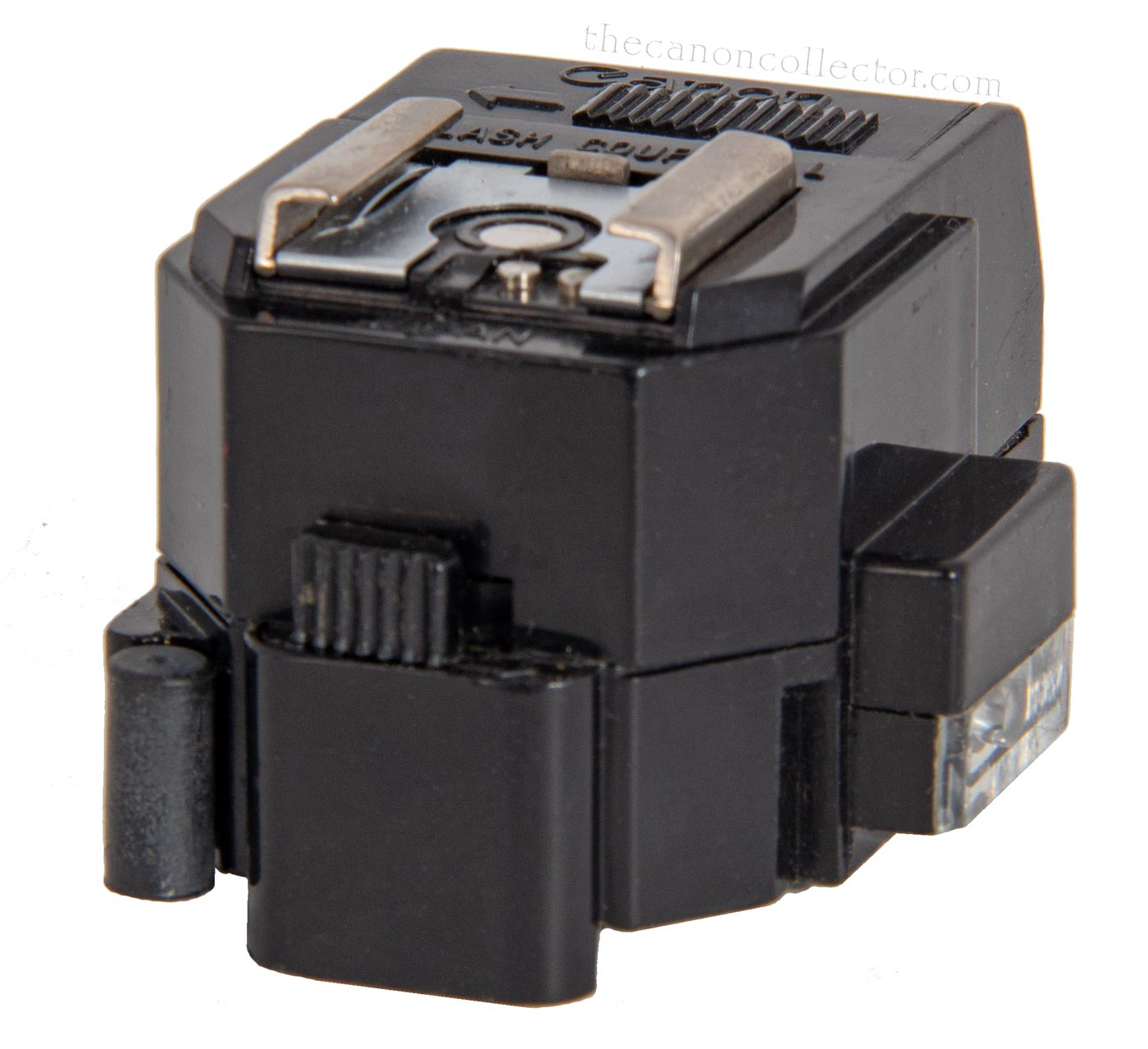 In the middle of the  back of the Flash Coupler L is the switch that controls the illumination bulb which can be seen on the right edge in this picture.

The bottom of the Flash Coupler L reveals the two electrical contacts necessary for the operation of the flash and of the CAT System. They are visible as two pins on the left edge. 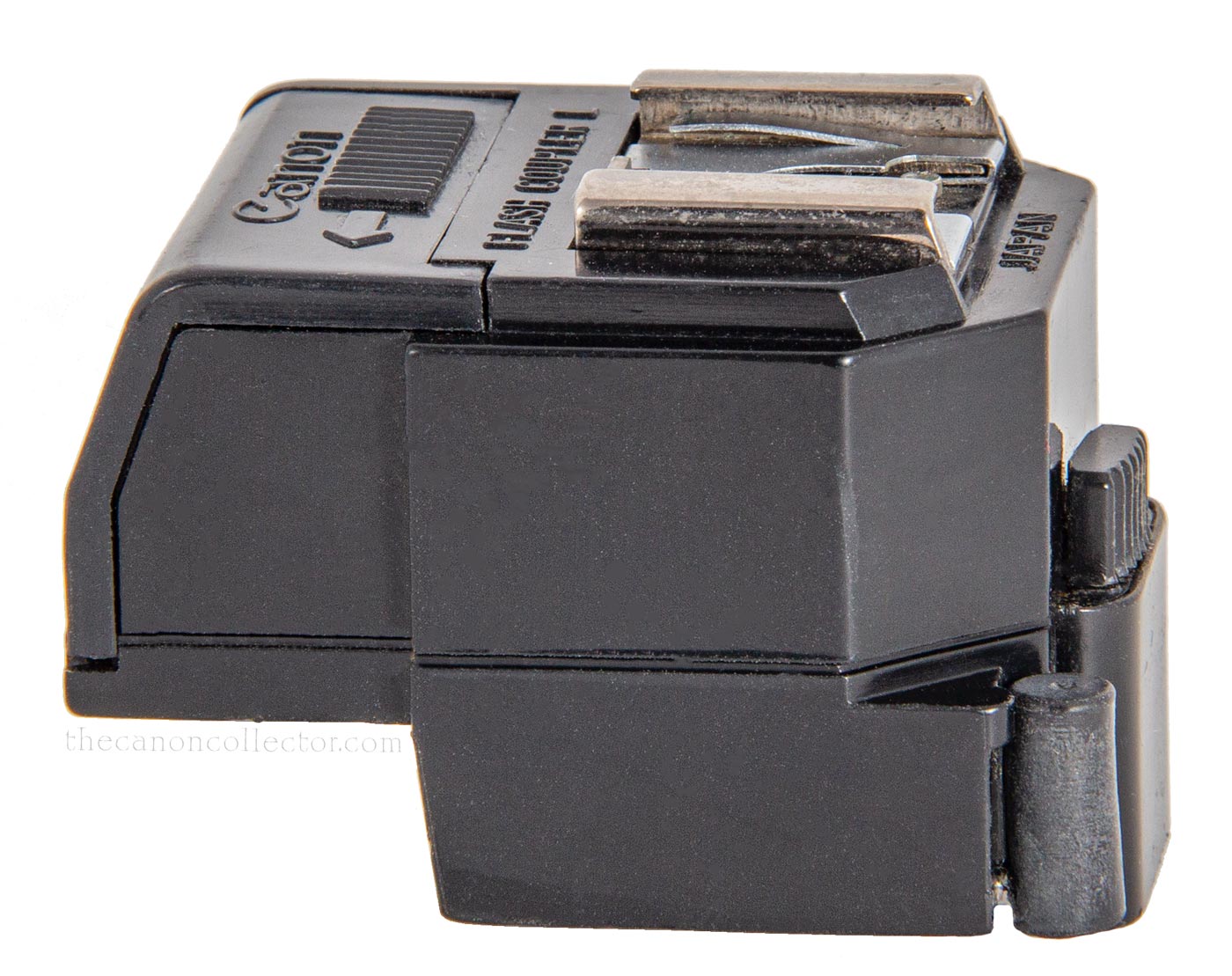 On the top at the left is the cover to the battery compartment and on the right edge at the bottom is the lever to unlock the Flash Coupler from the F-1 camera.

The Flash Coupler L comes boxed with an Instruction Sheet. It doesnèt reeally say very much. 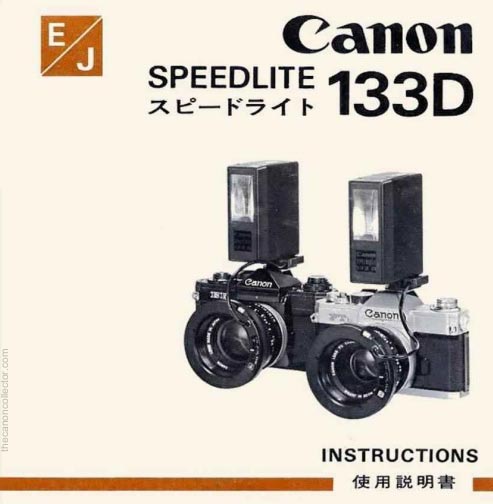 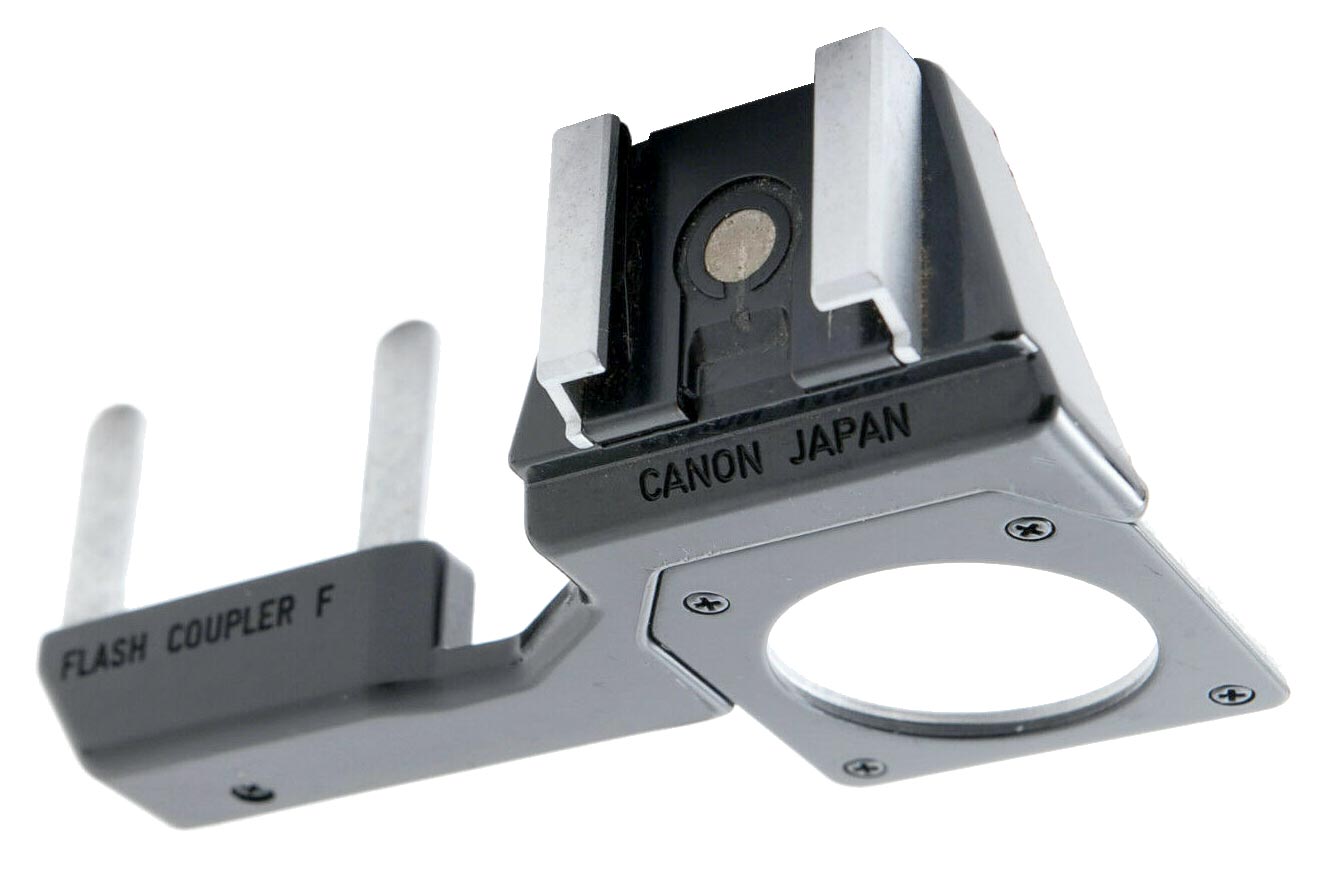 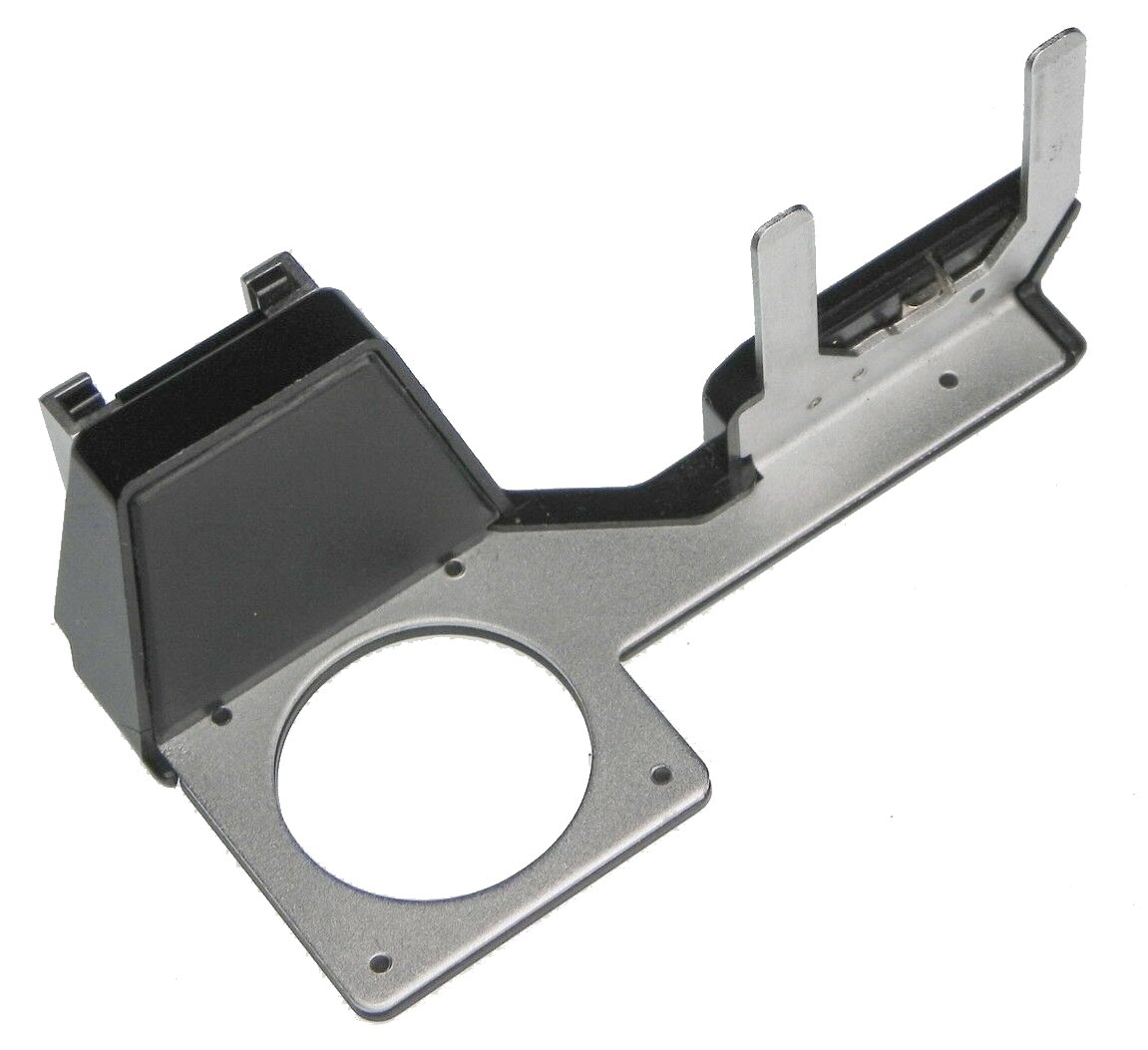 Unfortunately I do not yet have a copy of the Flash Coupler F. It is a neat device than gives the F-1 a hot shoe above the eyepiece over the pentaprism. You get the hotshoe and you can still use the rewind crank. 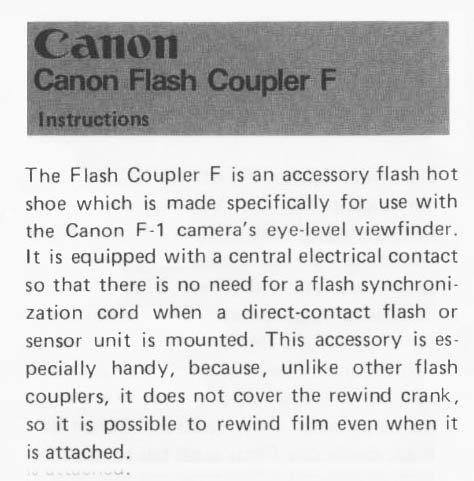 The Instruction sheet that comes with the Flash Cupler F is not very helpfull but it does give instructions for how to install it.