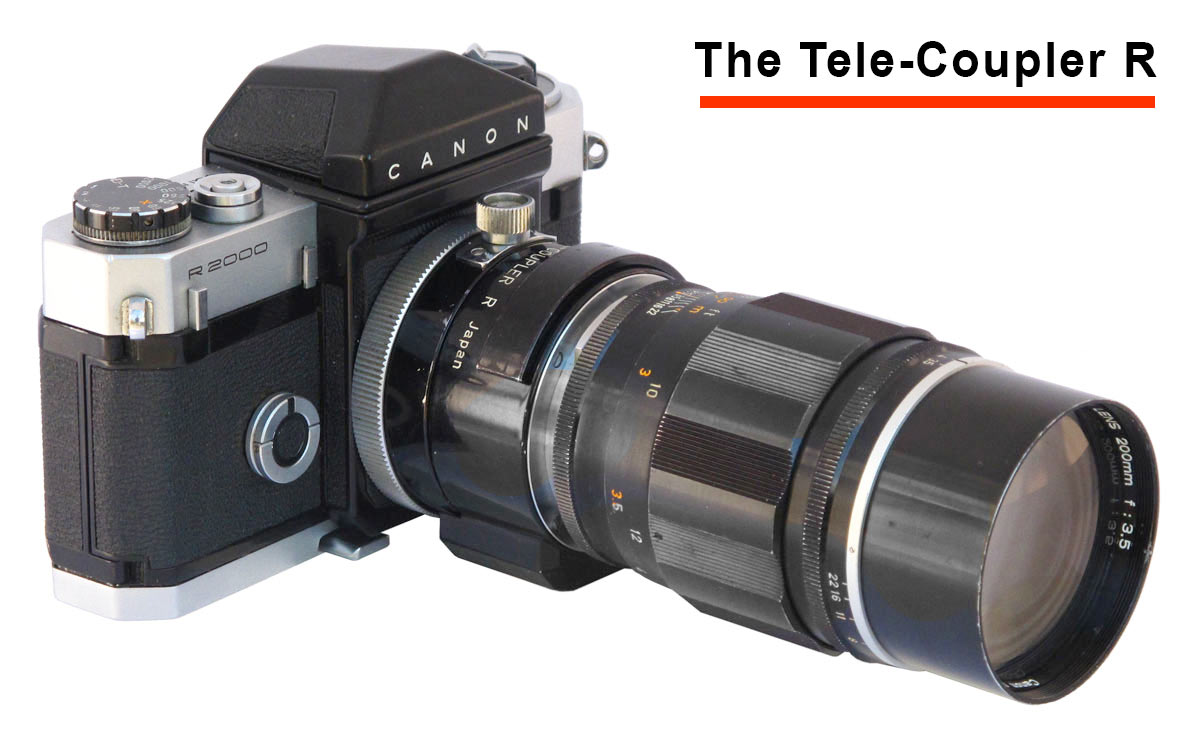 My Canonflex R2000 has mounted on it the Canon Tele-Coupler R with a 200mm f/3.5 lens attached. The Coupler inserts the same thickness between lens and film as the Mirror Box 1 does for range finder cameras. 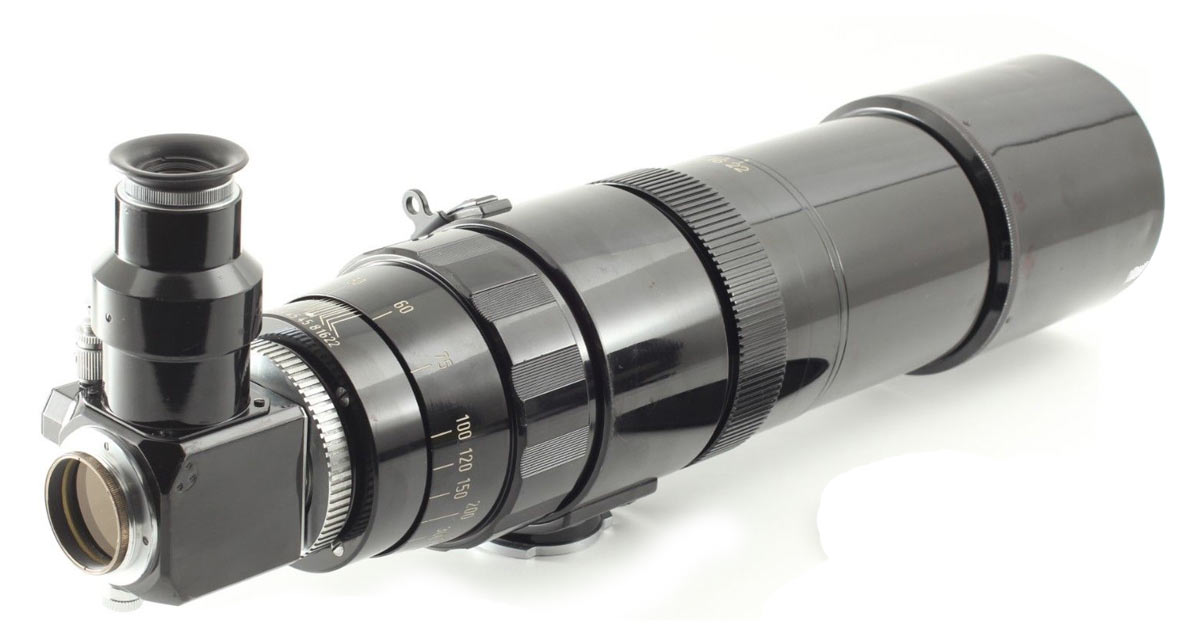 This is the Mirror Box 1 fitted with a 400mm lens. The Mirror Box screws into the standard M39 lens mount of a rangefinder camera. 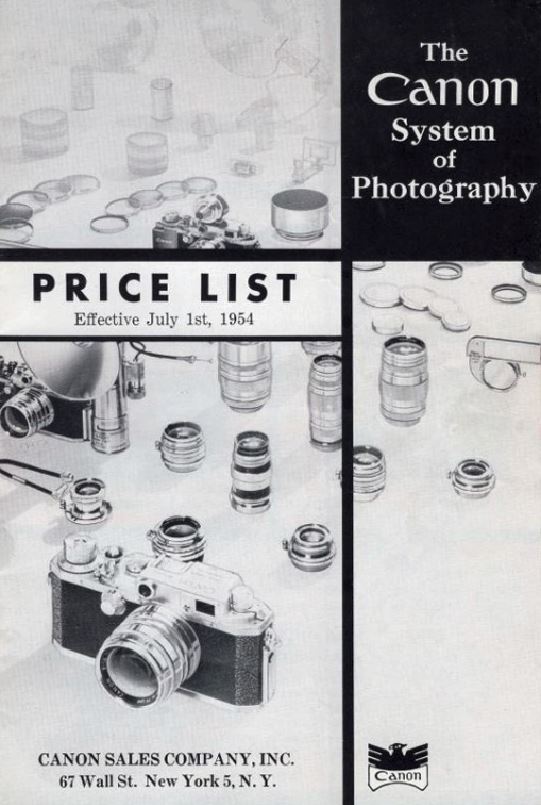 On page 9 of this 1954 Catalog there is a listing for the 800mm lens referred to in the text with the “mirror box housing”. On page 11 the Mirror Box is listed as being available separately.

I was browsing in a local camera store and I came across the above lens assembly. I didn’t know what it was other than the lens said “Canon Lens 200mm f:3.5” and it had an M39 screw mount. The attachment said “Tele-Coupler R” and the lens was screwed into it. The mounting threads were inside a two lug bayonet mount ring which I didn’t recognize. It was a new one to me. The lens and converter were fitted into a brown leather camera case that said “Canon R 200 f/3.5”.

Once home with my new treasure I found it mounted easily on my Canonflex R2000 and focused to infinity correctly. But what did I have?

The internet was very confusing on the subject. I found the Tele-Coupler R easily enough but there seemed to be no clear explanation for it. So I continued to dig and I think I finally understand this family of attachments. Let me explain what I found.

Rangefinder cameras have trouble focusing beyond thirty or forty feet because as the distance from the camera increases the angle being measured becomes small and tolerances critical. But long lenses, anything beyond about 200mm, are very sensitive to focus at those ranges.

For this reason lenses beyond about 135mm have been slow to appear for rangefinder cameras.

Canon did introduce an 800mm f/8.0 lens in March of 1953 (Kitchingman). They solved the focus problem by mounting it on what they called a “mirror box housing” or “mirror reflex housing”. This later came to be called the Mirror Box 1 and this is how I shall refer to them hereafter. A mirror was inserted into the light path which diverted the light up to a ground glass with a view finder lens above it. When the picture was taken the mirror was first moved up out of the way and the shutter could then be released. Not a very satisfactory arrangement. Although this Mirror Box was of Canon’s usual solid build, it was awkward to use and certainly not useful for sports or action photography.

Canon introduced the Model P in December of 1958. In the advertising brochure promoting this camera a 200mm f/3.5 and 400mm f/4.5 lenses are shown with the Mirror Box 1.

So, up to the introduction of the Model P the Mirror Box 1 was the solution for focusing  long focus lenses.

This changed with the introduction of the Canonflex camera in May of 1959. With the addition of the mirror in the camera the Mirror Box 1 was no longer required. Now long focus lenses could be focused by the camera in real time and very much more conveniently.

However, to go with the new camera Canon needed lenses and it was far easier to adapt existing lenses to the new camera than to create new ones from scratch. This is where the Tele-Coupler R came in.

The Mirror Box 1 added space between the lens and the film plane in the rangefinder camera and the long lenses that used the Mirror Box 1 could not mount directly on the Canonflex.  However, the Tele-Coupler R added sufficient space for these lenses to function on the Canonflex properly with accurate infinity focus. 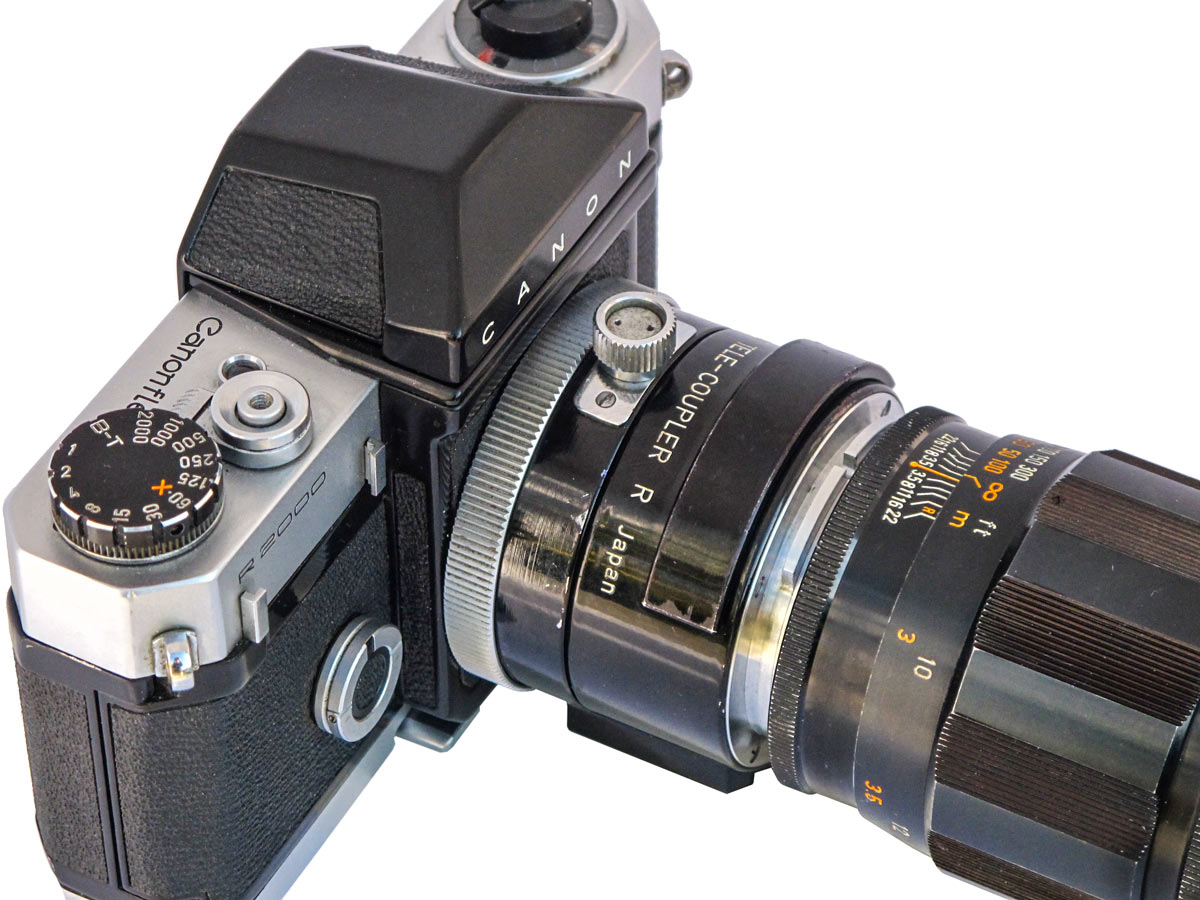 This is a closeup of my Canonflex R2000 with the Tele-Coupler R and 200mm lens mounted. You can see that my Tele-Coupler R is a little worn around the edges. 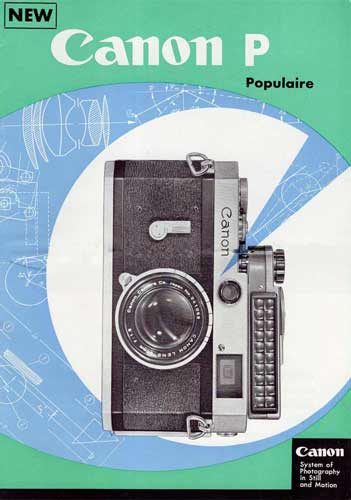 This Canon P Brochure shows and refers to a 200mm and 400mm lens that uses the “mirror box housing” which is shown in an image of these lenses. 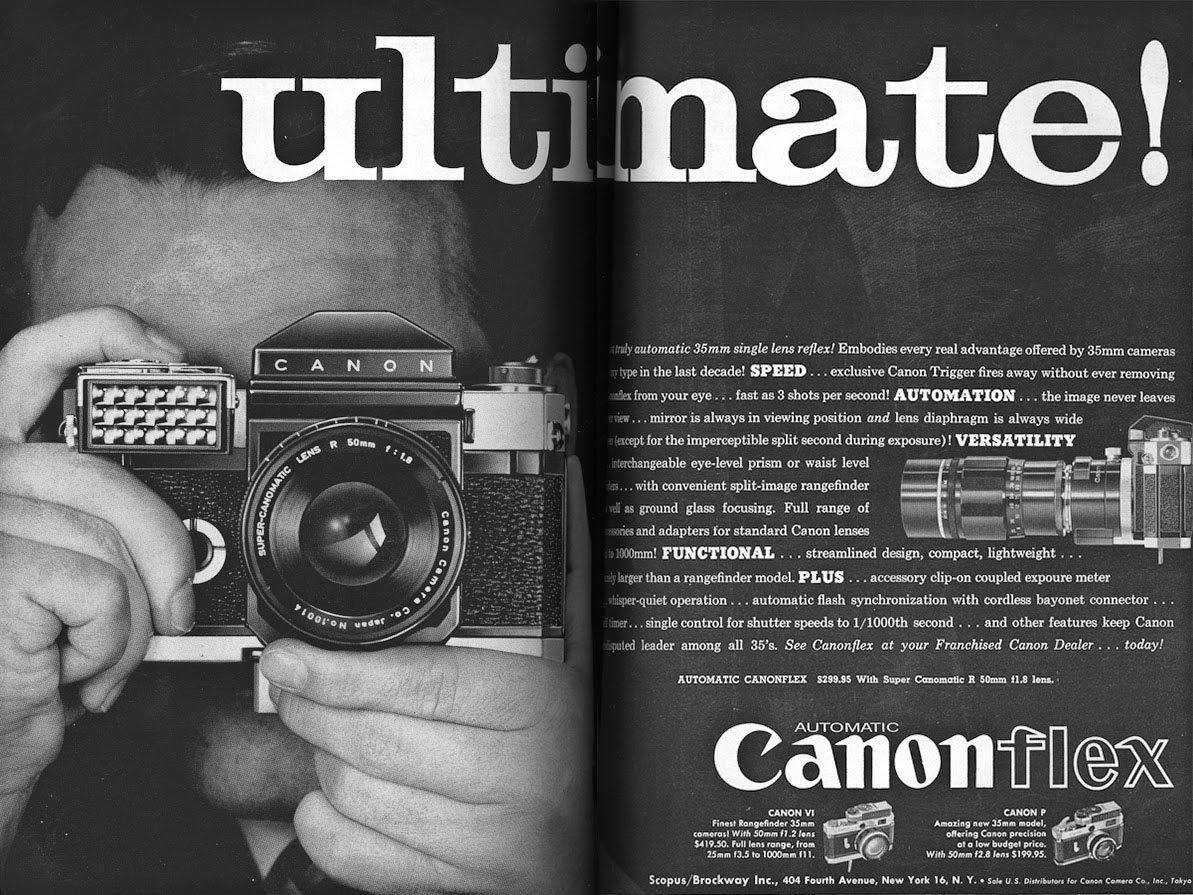 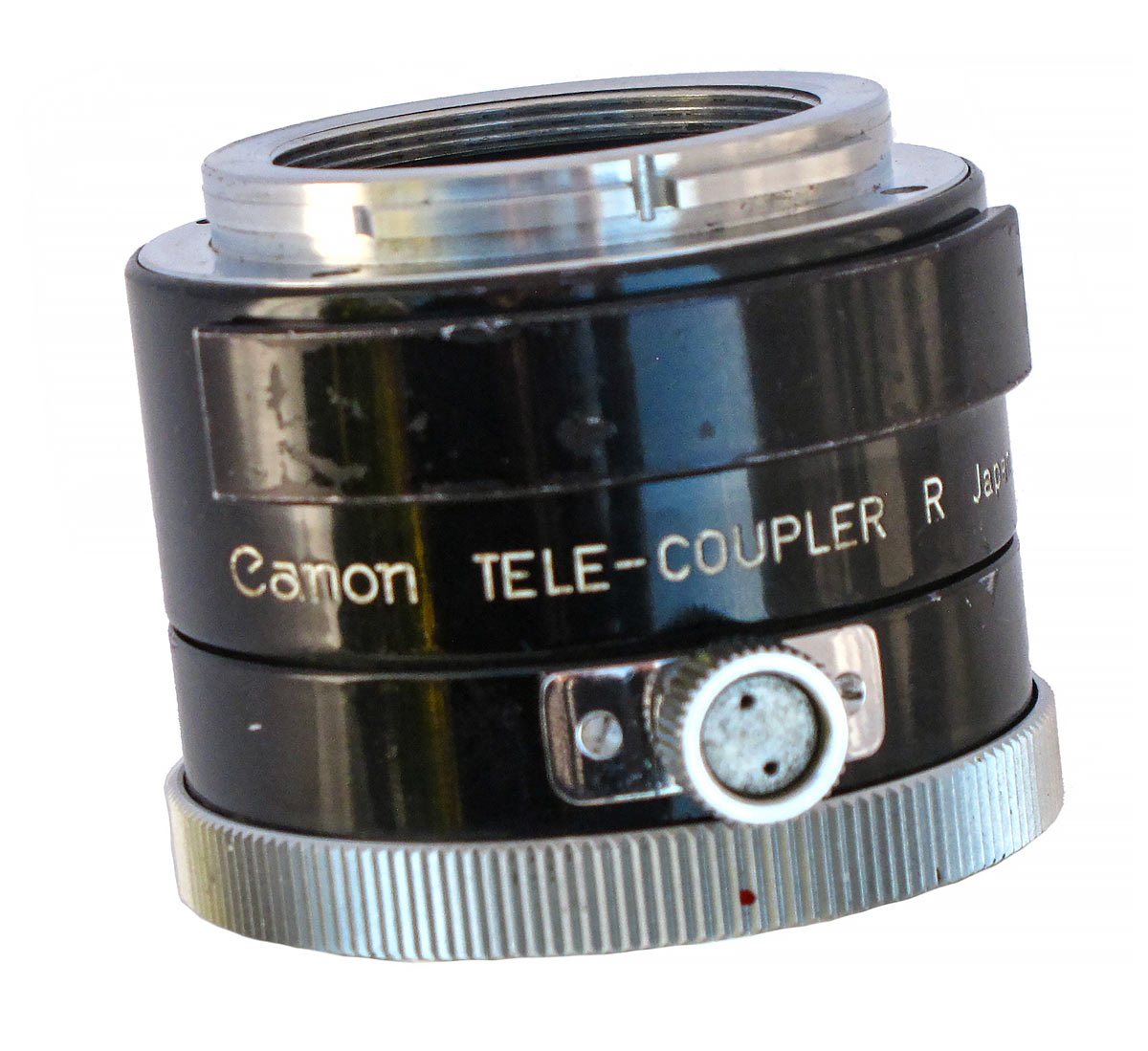 This is the top of the Tele-Coupler R. It has the chrome ring of the new “R” mount introduced with the Canonflex. The knurled knob when loosened allowed the whole mount to rotate by 90 degrees to change picture orientation. 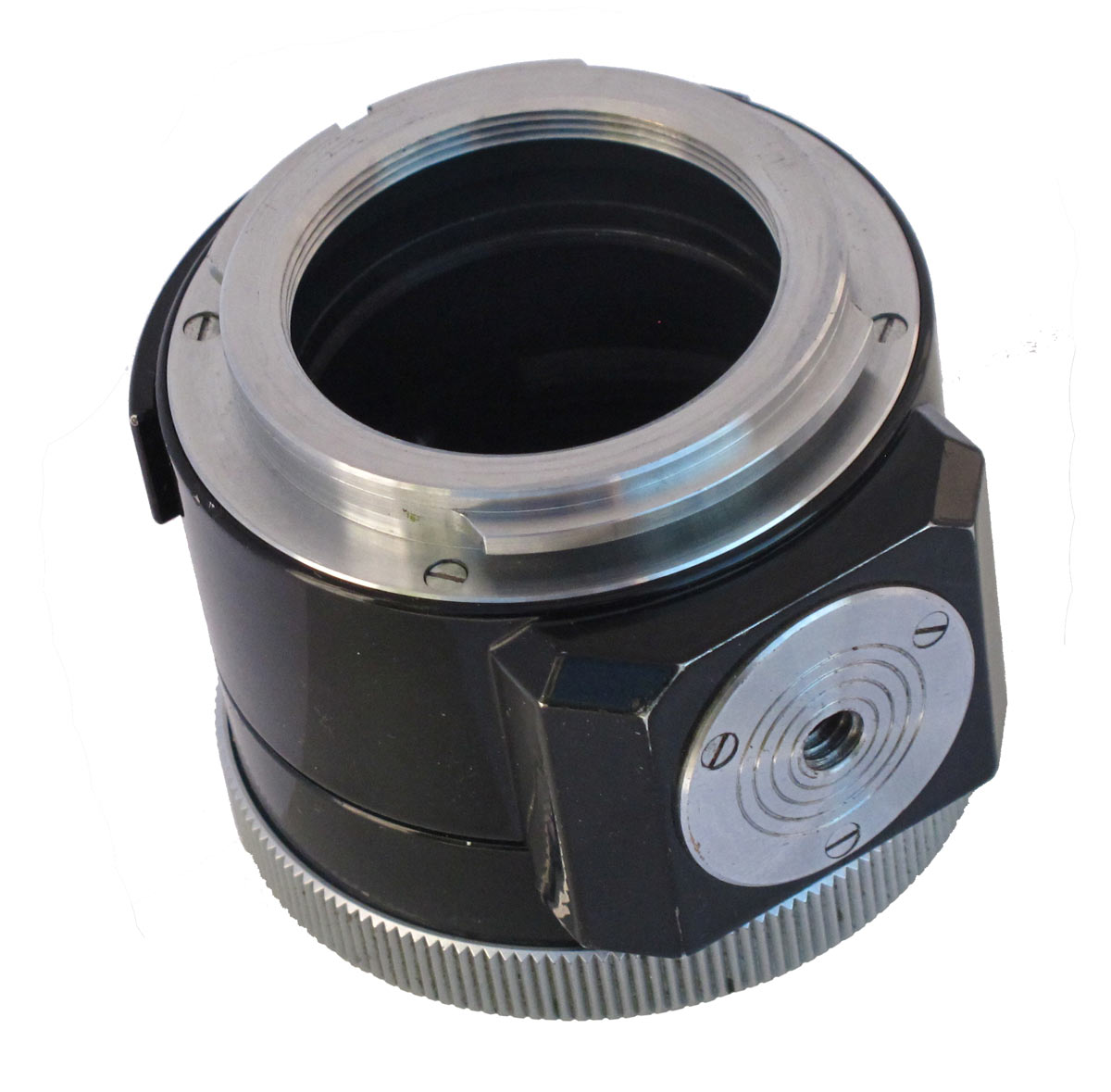 This is the bottom of the Tele-Coupler R showing the substantial tripod mounting foot. The picture gives a good view of the two lug bayonet mount with an M39 thread mount on the inside of it. 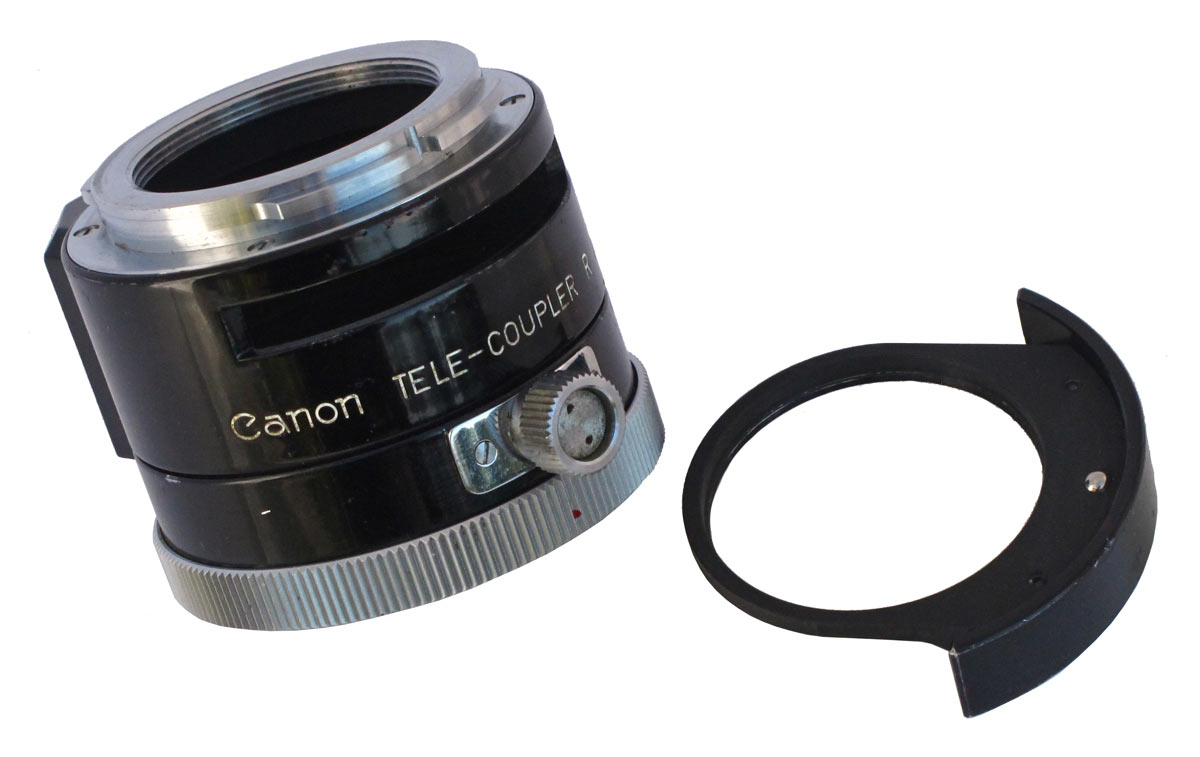 The Tele-Coupler R has a built in filter mount which is shown removed from the Coupler. This mount has a 39mm thread cut into it. 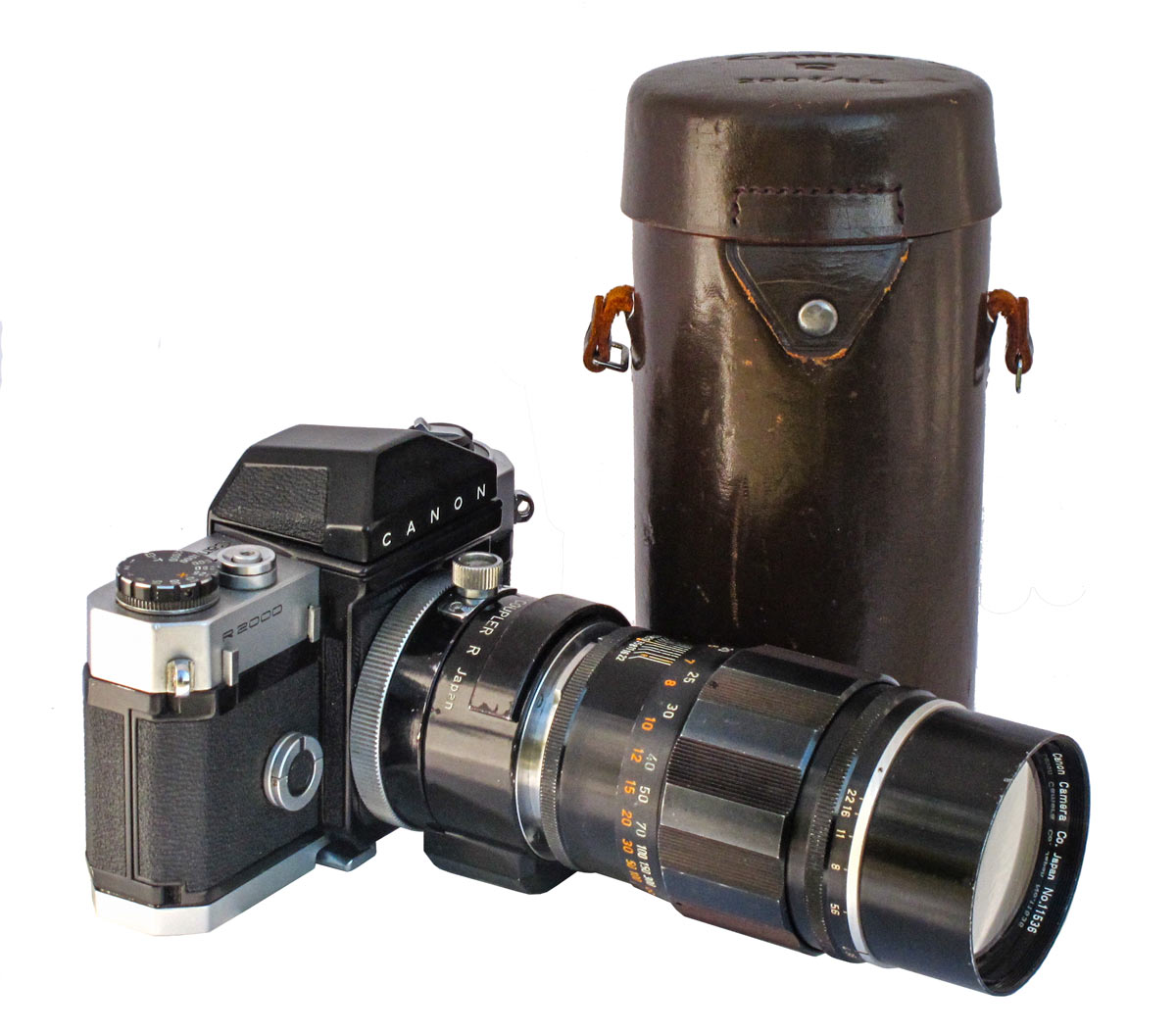 This lens came in a tan brown carrying case typical of Canonflex lenses with “Canon R 200 f/3.5” impressed into the leather top. The lens and Tele-Coupler together fit into this case.

So that is my Tele-Coupler R. A little bit beaten up but a welcome addition to the Collection. However, let’s take a minute to finish the “Coupler” story.

In January of 1961 Canon introduced the Model 7 and the Mirror Box 2. Now remember, at this point the last camera in the Canon lineup was the Canonflex and the Model P before that.

It is interesting to note that in late 1961 Canon introduced two lenses designed especially for the Mirror Box 2. They were the M 200mm f/3.5 and the M 135mm f/2.5. They were the only two lenses to be designated as “M” series lenses until the EOS-M cameras of our day. I have tried to fit Canonflex R lenses and lenses for the Tele-Coupler onto the Mirror Box 2 but they don’t fit. Well, they fit but they won’t focus. If you look in the User Manual for the Model 7 the only lenses listed for the MB2 are the two M lenses referred to here.

But think about the confusion at that time. A couple of years after the introduction of the Canonflex Canon was still developing range finder cameras. SLR cameras were new and had not taken a large share of the market up to that point. Canon did not show dedication to the new system until introduction of the F series of cameras with the Canon FX later in 1964. All of the camera companies were cautious because to misjudge the market could spell the end of a company.

The details of my own copy of the Tele-Coupler R are:

Lens Mount:      Canon R on the camea end and a two lug bayonet mount on the lens end with an internal M39 thread.

Condition:         Condition is very good but there are signs of hard use although the unit is sound.

Acquisition:      The Lens and Tele-Coupler were acquired October 10, 2018. The photographs here of the Coupler are the unit I have. 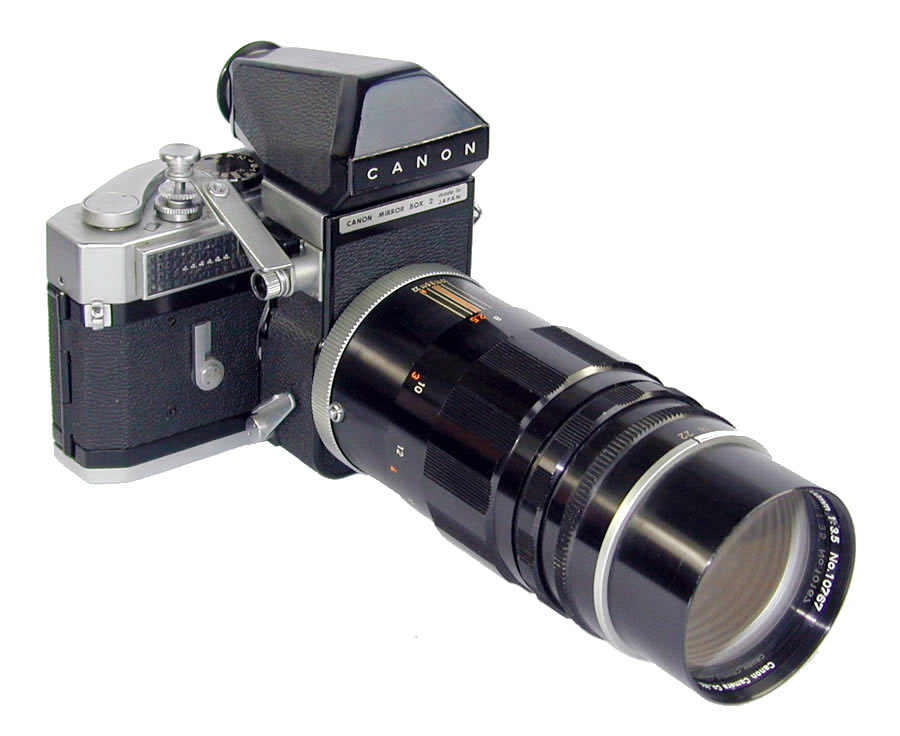 This is the Mirror Box 2 mounted on a Canon Model 7. The Mirror Box 2 was created for long focus lenses where the rangefinder precision was not sufficiently accurate. 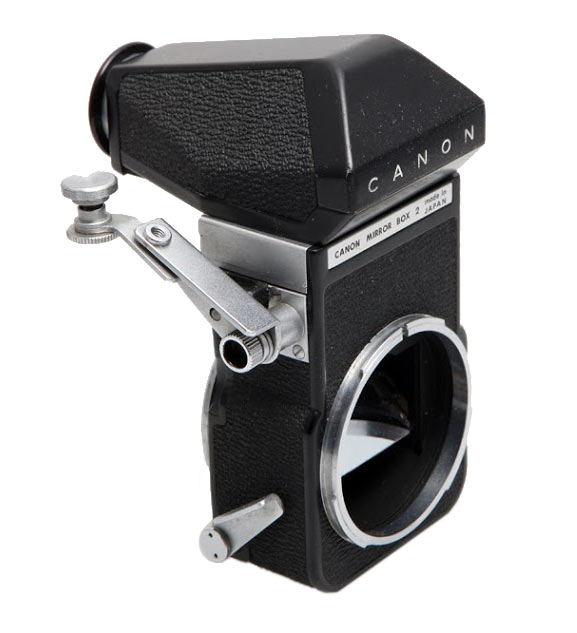 The top lever on the side of the Mirror Box 2 extended over the shutter button and when it was depressed to fire the camera the mirror first flipped up out of the way. The mirror stayed in the up position until reset with the lower lever.