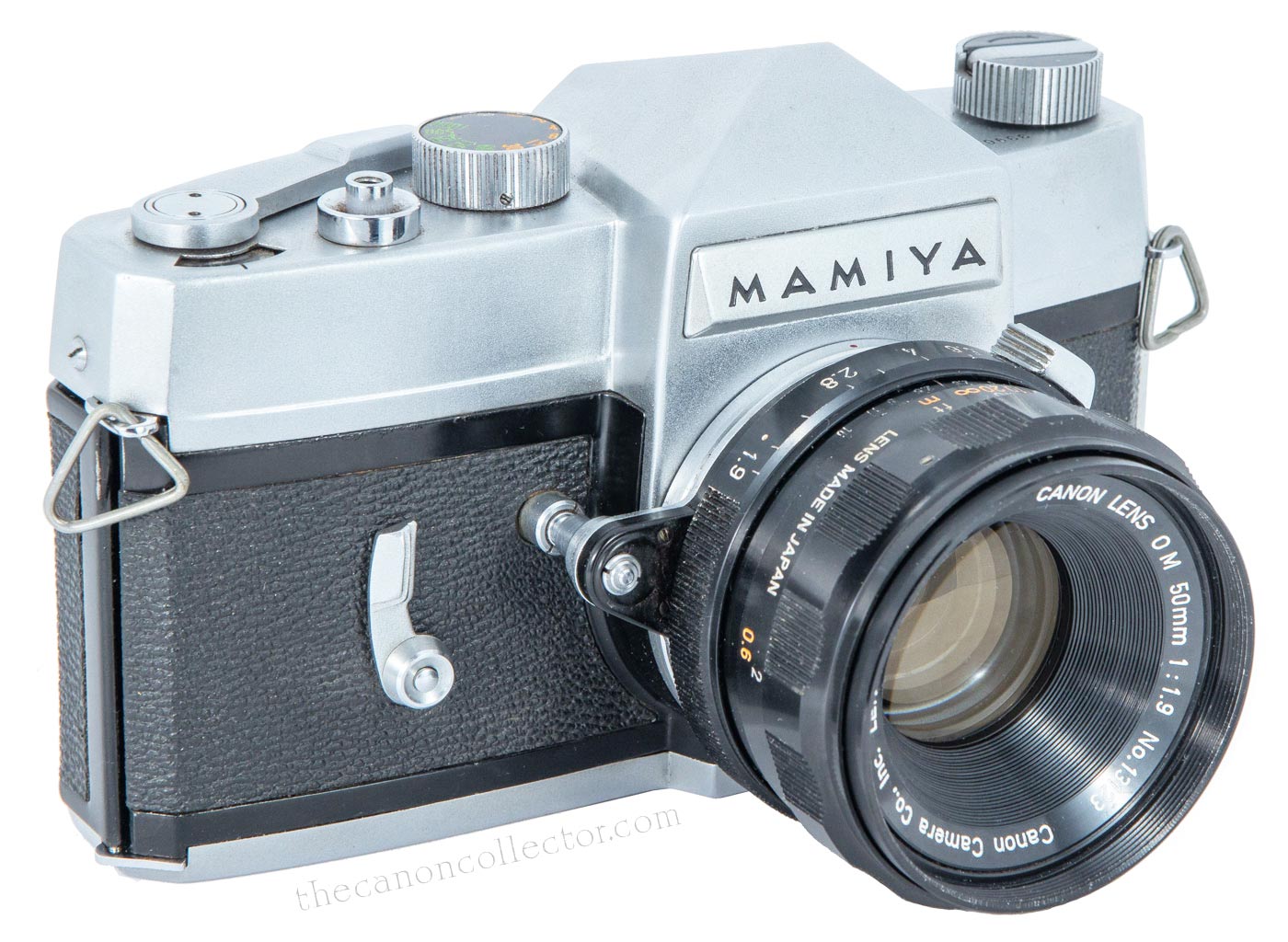 What is of interest here is not the Mamiya Prismat NP pictured but the lens on it. This is the Canon OM 50mm f/1.9 lens in an Exakta mount. It is a unique lens and somewhat rare these days.

That is a Mamiya camera. What is it doing on a Canon collecting website? Well, as they say, therein lies a tale!

the early 1960’s Osawa was distributing Mamiya products in Japan and to the world. They were also the wholesale distributor for Canon in Japan. Bob Shell tells us in his book that Canon was also a minority shareholder in Mamiya.

It was in this period, 1959 through 1962 that Canon was struggling with their Canonflex lineup and was in some difficulty. Whether this was a motivating factor or not I don’t know but the two companies worked jointly on Mamiya’s first SLR. The camera was totally a Mamiya design but as they were not known for quality lenses at this point they sought a Canon lens for their camera. This was to be a high end option to be offered alongside the equivalent Mamiya lens that normally came with the new camera. 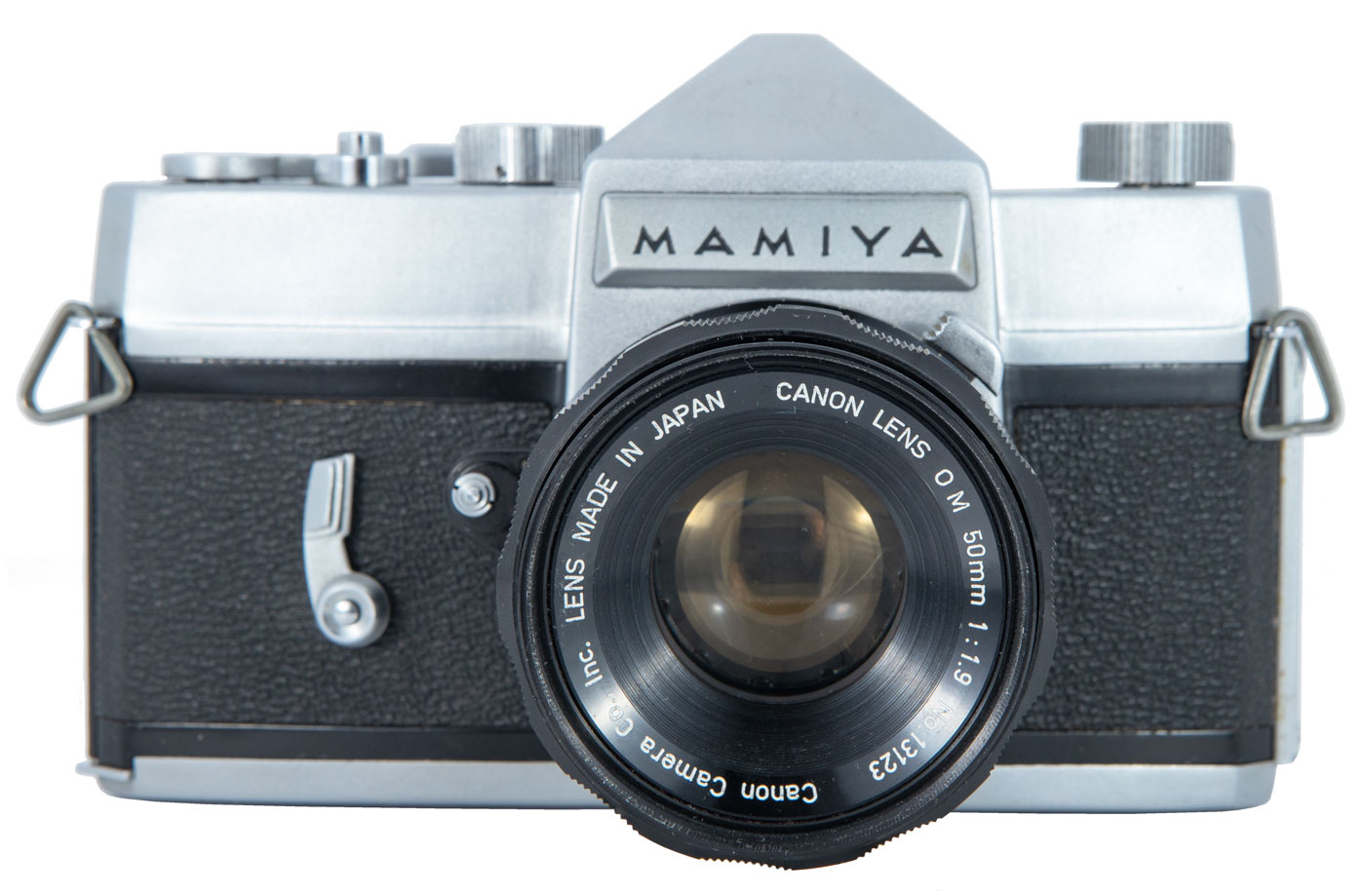 The clean lines of the Mamiya Prismat NP are typical for manual cameras of its day. The unusual feature is the Canon lens mounted on it with an Exakta lens mount.

The top deck of the Prismat is clean and functional and laid out in what became the standard layout for manual SLR’s. 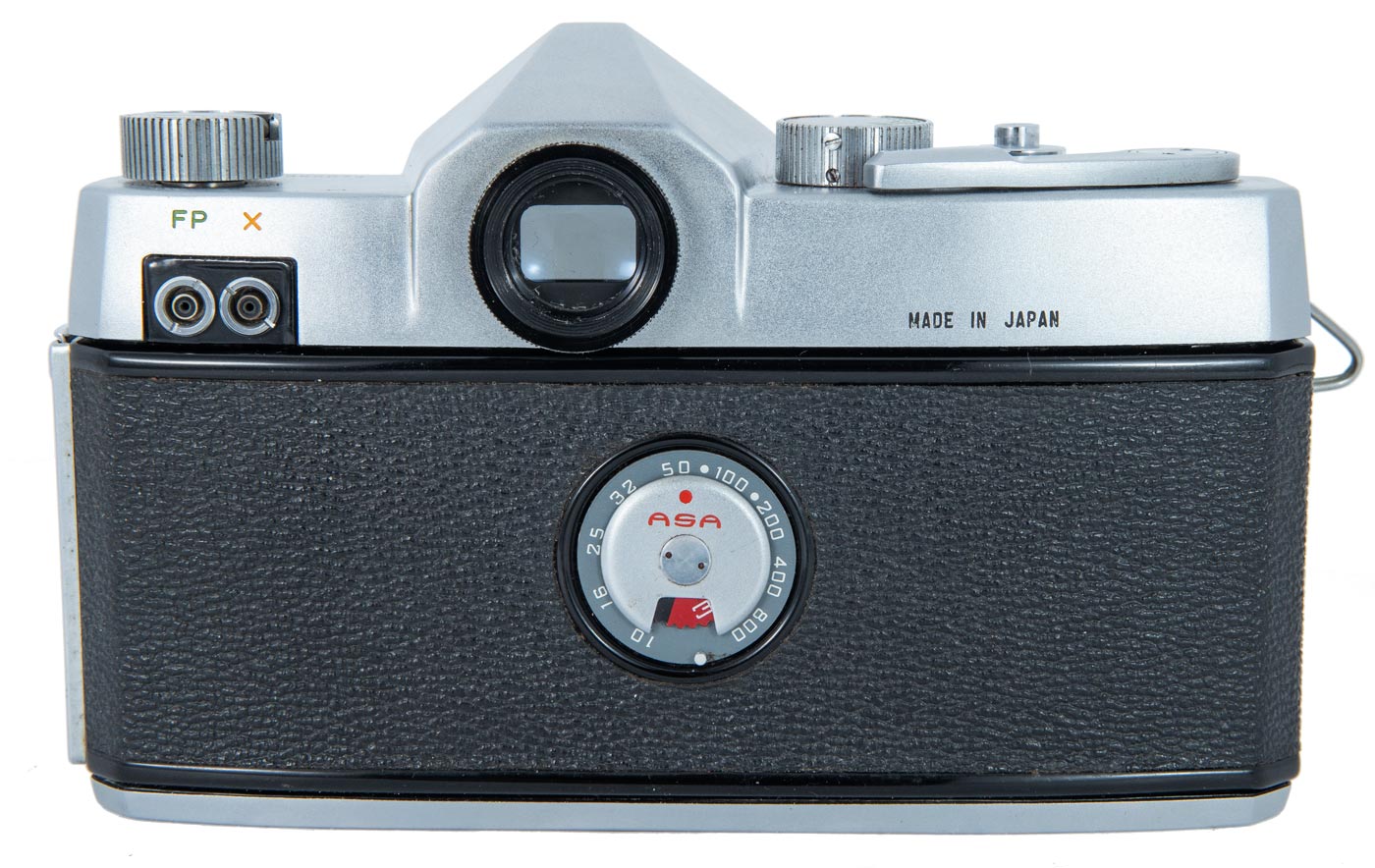 The back of the Prismat has two flash PC Sockets, FP and X sync. The back swings open and on it is mounted a film reminder wheel which is set manually.

The bottom reveals nothing but the tripod socket and the sprocket release for rewinding. 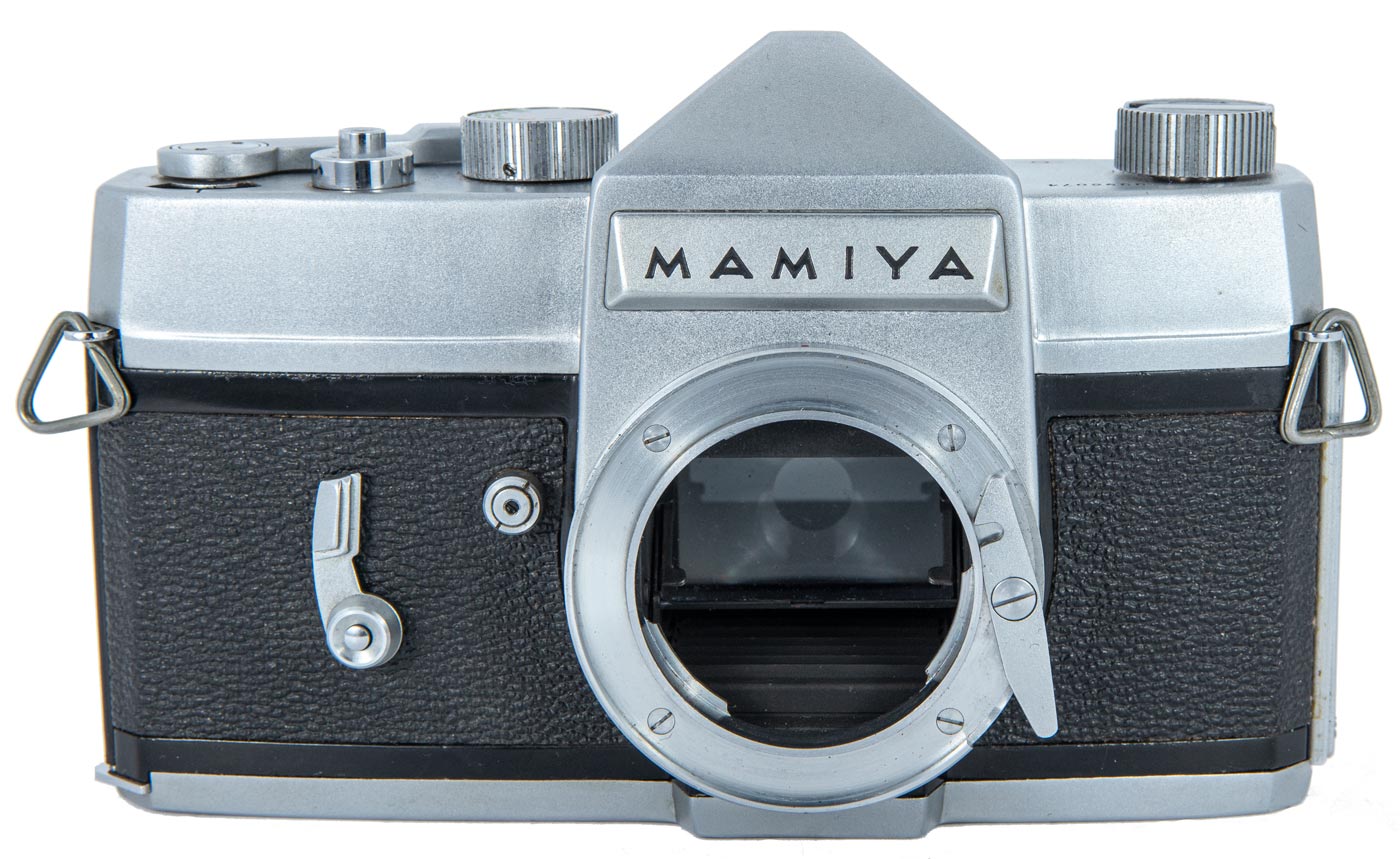 The lens mount is a simple bayonet mount that locks in place with the side mounted latch. 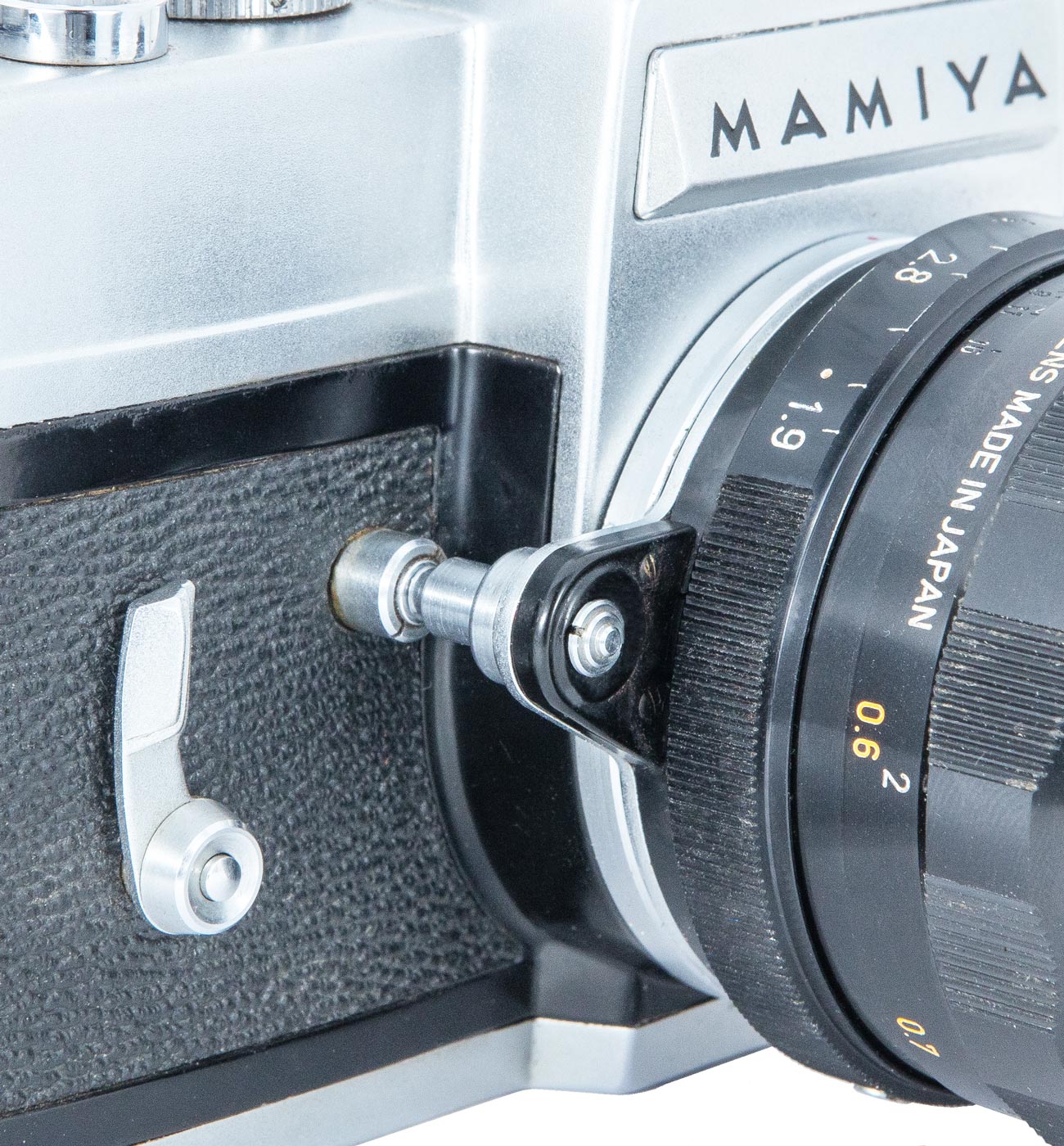 When mounted the lens has a tab which sits over a plunger on the front of the body. As the shutter is pressed the plunger moves forward causing the lens to stop down to its preset f/stop.

The camera that Mamiya came up with was the Prismat. The first model Prismat was not widely marketed, if at all. The Camera that made it to market was the Prismat NP. Although not a runaway success it was marketed around the world. Sears rebranded it as the Tower 32B or the Sears 32A. A metal vertical shutter version of the NP was known as the Sears SL II. In the UK it was marketed as the Mamiya Prismatic or the Mamiya Reflexa.

The Prismat was a good camera and with the Canon lens was capable of excellent pictures. Loading the film was standard and it handled like other manual cameras of the day. The differences centered around the lens.

Mamiya chose to go with the Exakta lens mount which was a simple bayonet with no provision for communication between lens and camera. As a result there was no way for the lens mount to signal the lens to stop down before the shutter fired.

Exakta camera lenses would overcome this by placing a tab on the lens over the shutter button, which was mounted on the front of the camera beside the lens mount, and when the button on the tab was pressed it closed the aperture just before it pressed on the shutter button.

The Prismat reverses this process. When the shutter button is pressed a plunger moves forward out of the front of the camera and presses a button on a tab on the side of the lens so that the iris shuts down to a preset f/stop just before the shutter fires.

Setting the f/stop is done as on a normal FL or FD lens. The iris is then “cocked” by pressing a silver tab on the top left side of the lens which opens it to full aperture for focusing. It then stops down when the shutter button is pressed just before the shutter fires.

In all other respects this is a good solid camera and it feels like other manual cameras of the time. It reminds me of my Minolta SR-1. 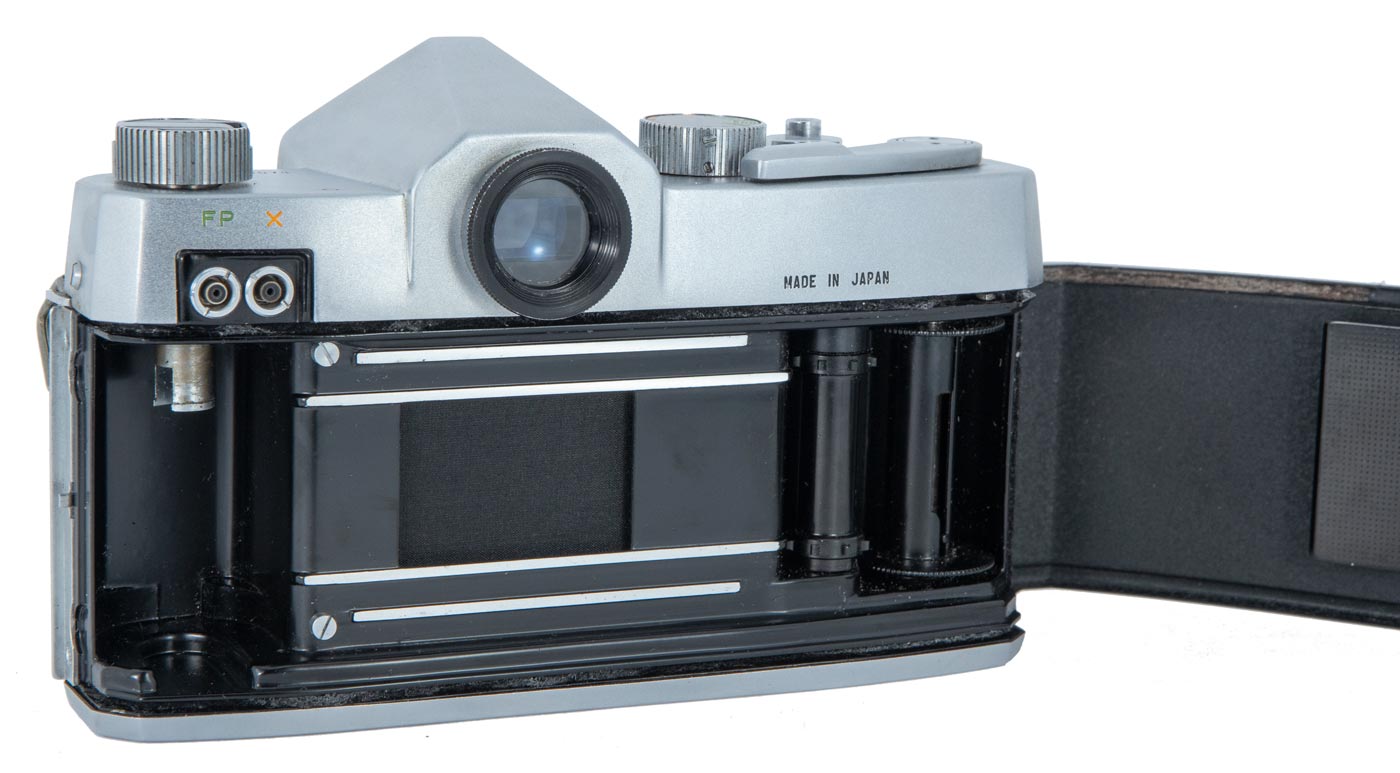 Inside the Prismat is the same as all of the mechanical cameras of this period and loading and unloading the film is simple and easy. 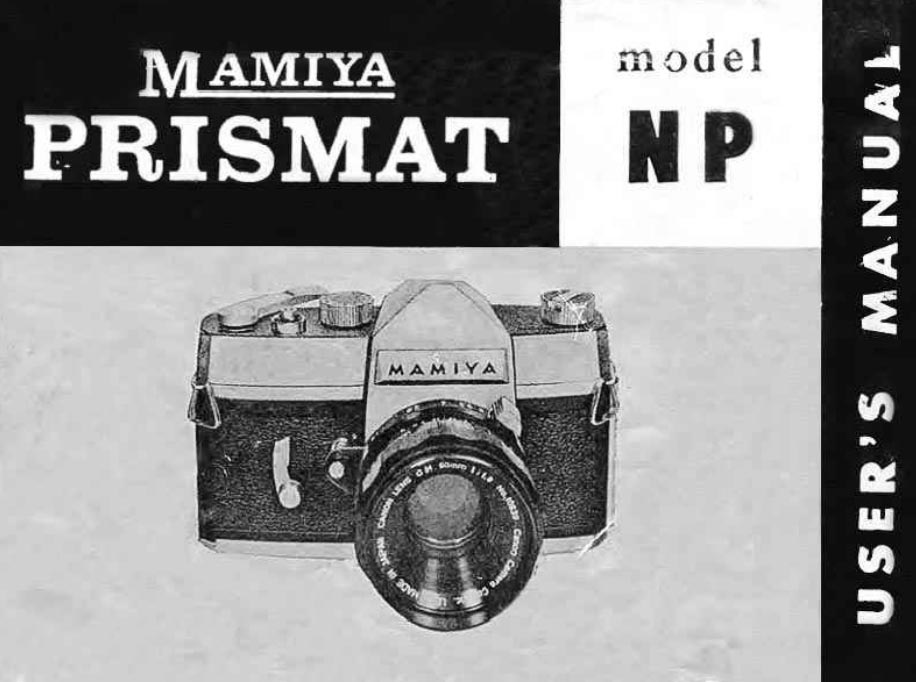 Camera operating details can be found in the User Manual above. Information is a little sparse but the camera is simple.

The OM 50mm f/1.9 lens is somewhat rare today and commands a price well above comparable R, FL or FD lenses. The deepset front element and name ring looks very like the R 50mm f/1.8 lens Canon was then producing for the Canonflex cameras. Lens barrel diameter was smaller and the filter ring was only 52mm as opposed to the larger Canomatic lenses. 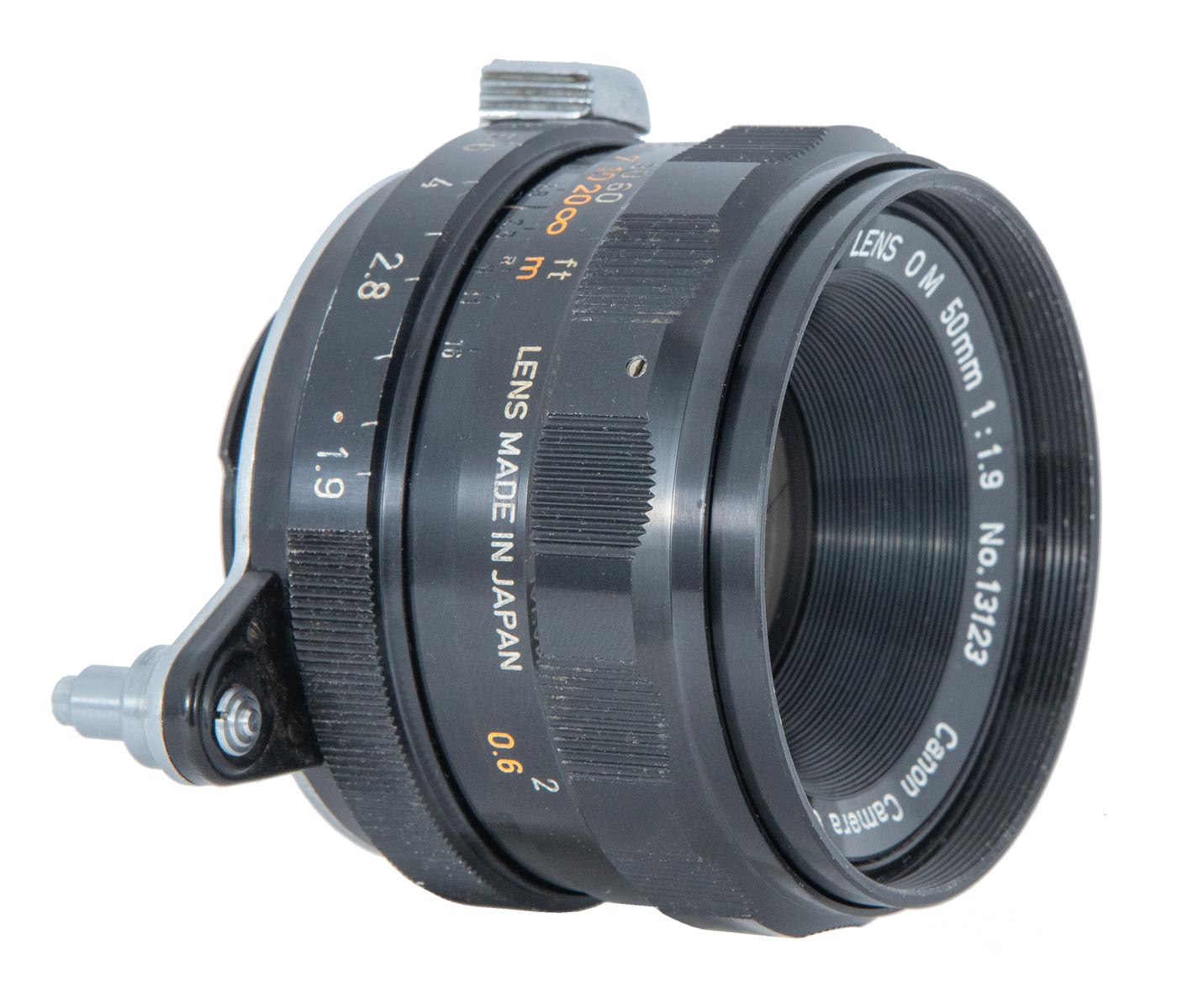 The OM 50mm f/1.9 lens had a deep set front element and name ring very like the Canomatic R 50mm f/1.8 lens. The tab on the left of the image is the “stop down” trigger which was fired by a pistion on the front of the camera body.

In this rear view of the lens the “stop down” trigger detail can be seen. At the top of the image is a metal tab that moves counter clockwise to open the stopped down lens to full aperture for composing and focusing an image. 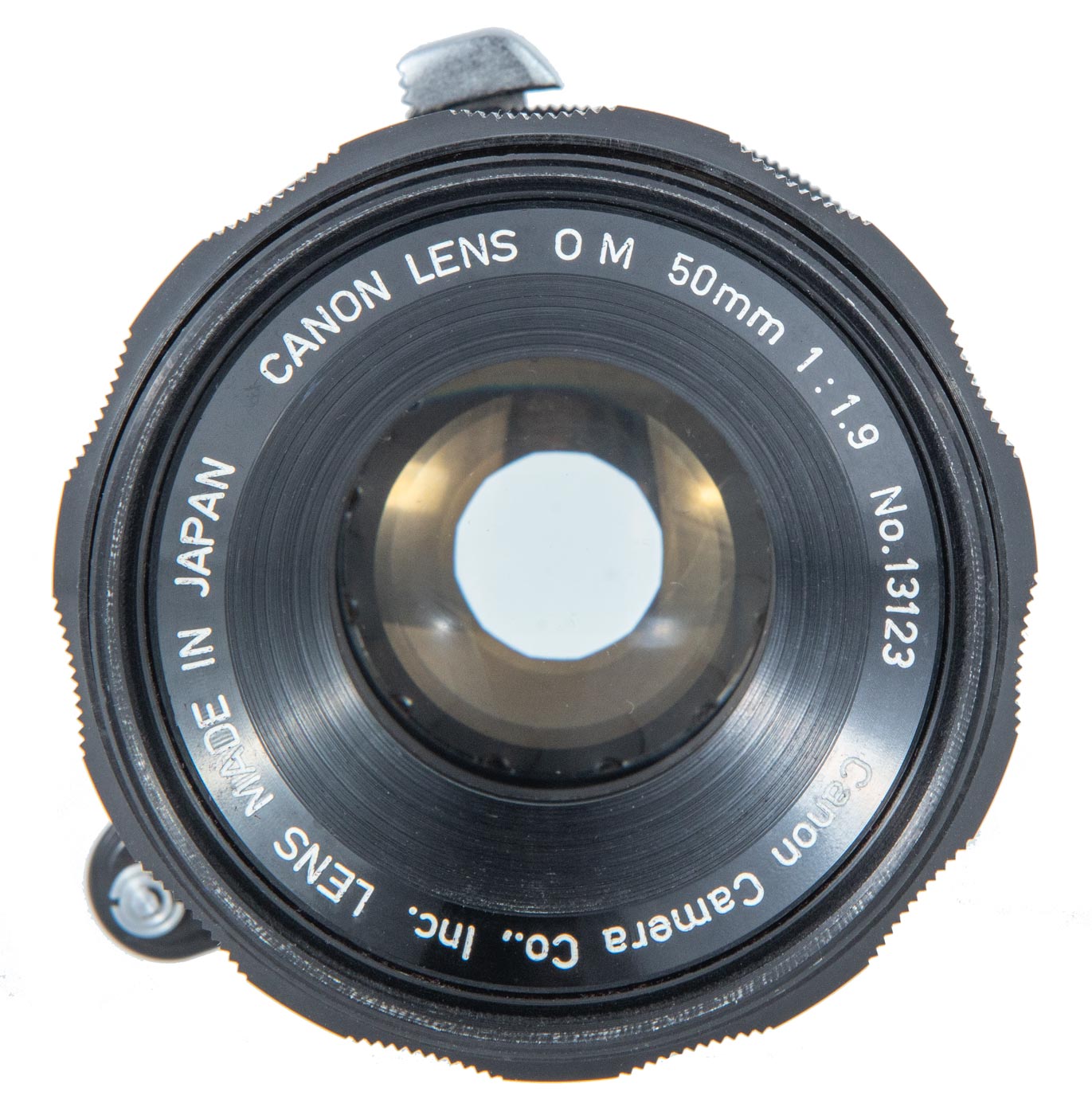 The layout of the name ring and lens surround is identical to the Canomatic 50mm f/1.8 lens which suggests the lenses may be the same internally. However, that is not known for certain, at least by me. 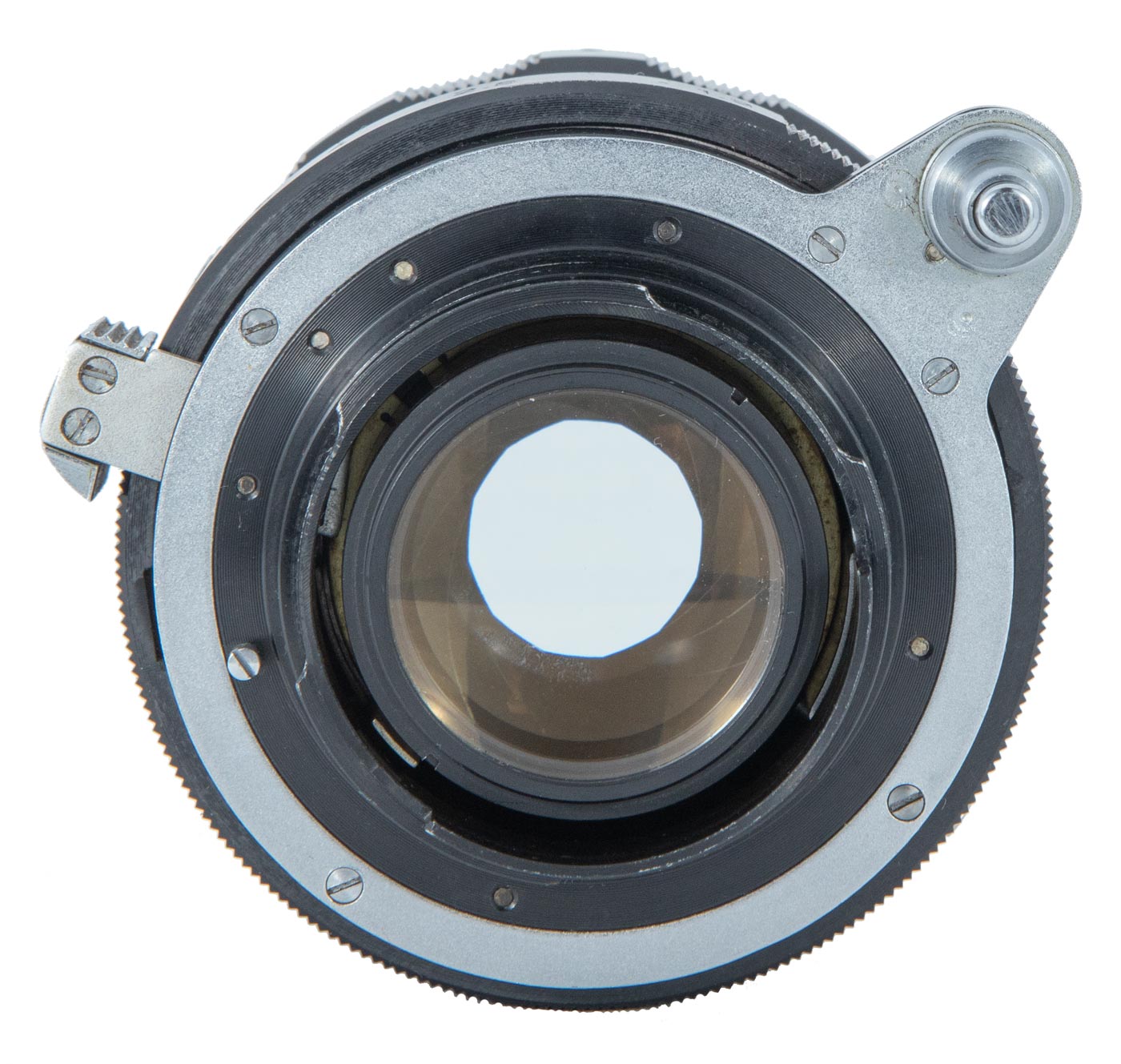 A straight on rear view of the Canon OM lens shows the bayonet locking lugs quite clearly. Note the absence of any linkages on the back to allow lens and camera body to communicate information.

Examining the Canomatic R 50mm f/1.8 and the OM 50mm f/1.9 closely reveals that the front and rear elements appear to be identical and it seems to me that this OM lens may simply be the Canomatic repackaged. I have not examined them internally but that would not tell us much more. It seems logical that they are the same lens as Canon was already in production with the Canomatic 50mm.

The OM lens designation is also a problem. Looking at my sources there are two suggestions but no one seems to say for certain. It may stand for “Osawa/Mamiya”. Another suggestion is that it means “Original Manufacturer”. But here too we have no definitive answer.

Shooting with the Prismat and OM 50mm f/1.9 Lens

I love to shoot with my old cameras and this one was no exception. It appeared to be functioning well so I loaded it up with a roll of film and out I went for a walk.

The camera handled well. It is solid, a little on the noisy side, and the shutter is a bit soft. I like a crisp trigger release on my rifles and my cameras.

I thought the method of opening the aperture before every shot would be bothersome but I found after a few shots it simply became part of the process. It was not problematic at all. And it is a fail safe system. If you do compose and focus with the lens stopped down it will still take a properly exposed image. No, the arrangement is quite practical. 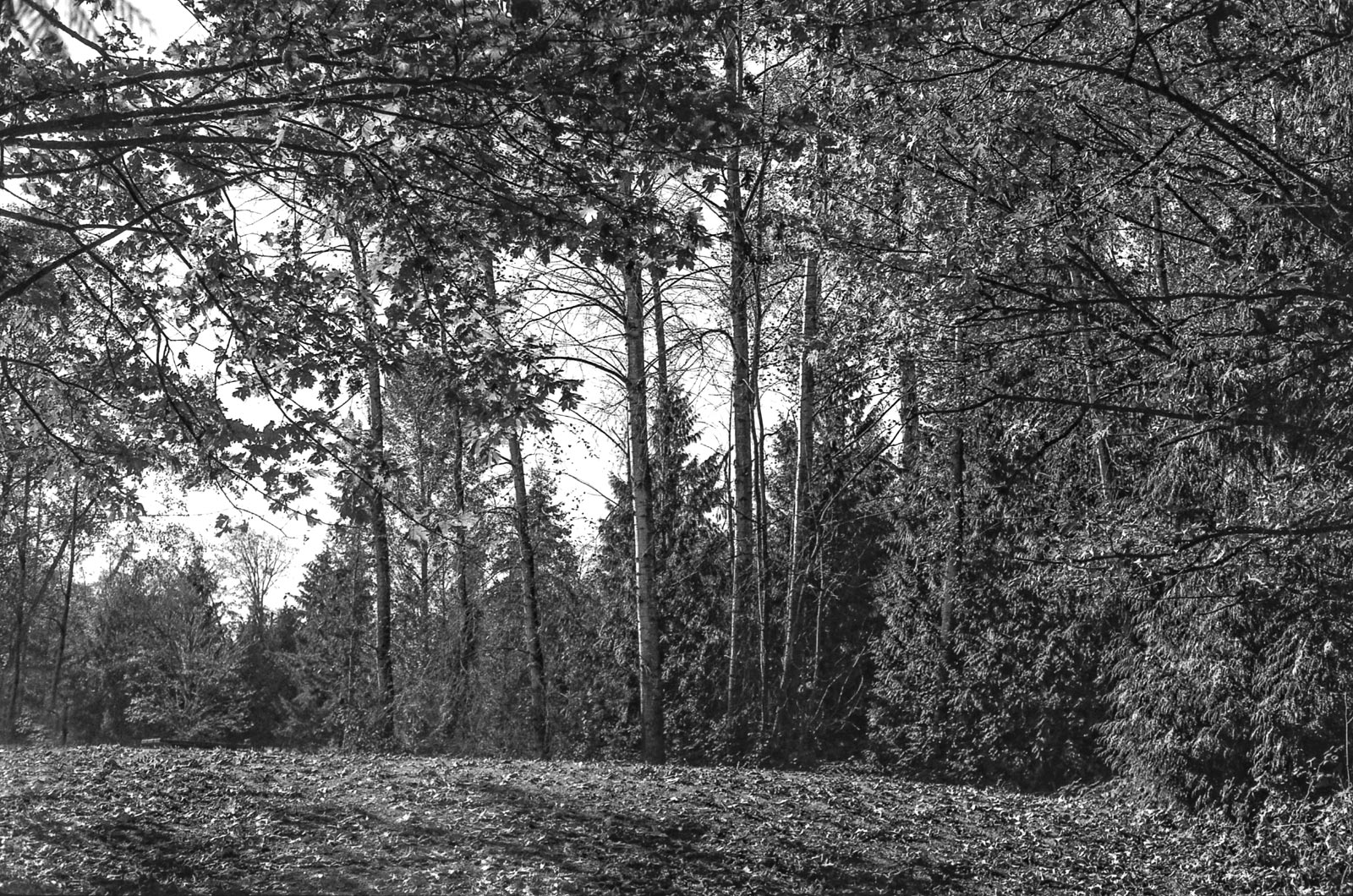 It was a beautiful late October day and at our latitude the sun was not very high in the sky giving me very dramatic shadows. Unfortunately I underexposed my roll of film. I think I lost track of time developing somewhat and the negatives turned out a little thin. So my two examples here have poor shadow detail and are a bit contrasty from my software trying to compensate.

I scanned the images with my flatbed Canon scanner so the detail has suffered a little but from these two images you can see that this camera is certainly capable. I found the lens to be subject to flare which was agrivated by the sun being so low in the sky. I think too that the shutter curtains are leaking light at the bottom. Not on every image but on a few. Using this camera, any film camera really, it is a good idea to keep the lens cap on until you are ready to compose and shoot a picture.

In summary then, it is a decent camera and the lens is capable of good images. The lens mount and the method of stopping down the lens is not an impediment to good photography. I like the camera. But then I like all my cameras. 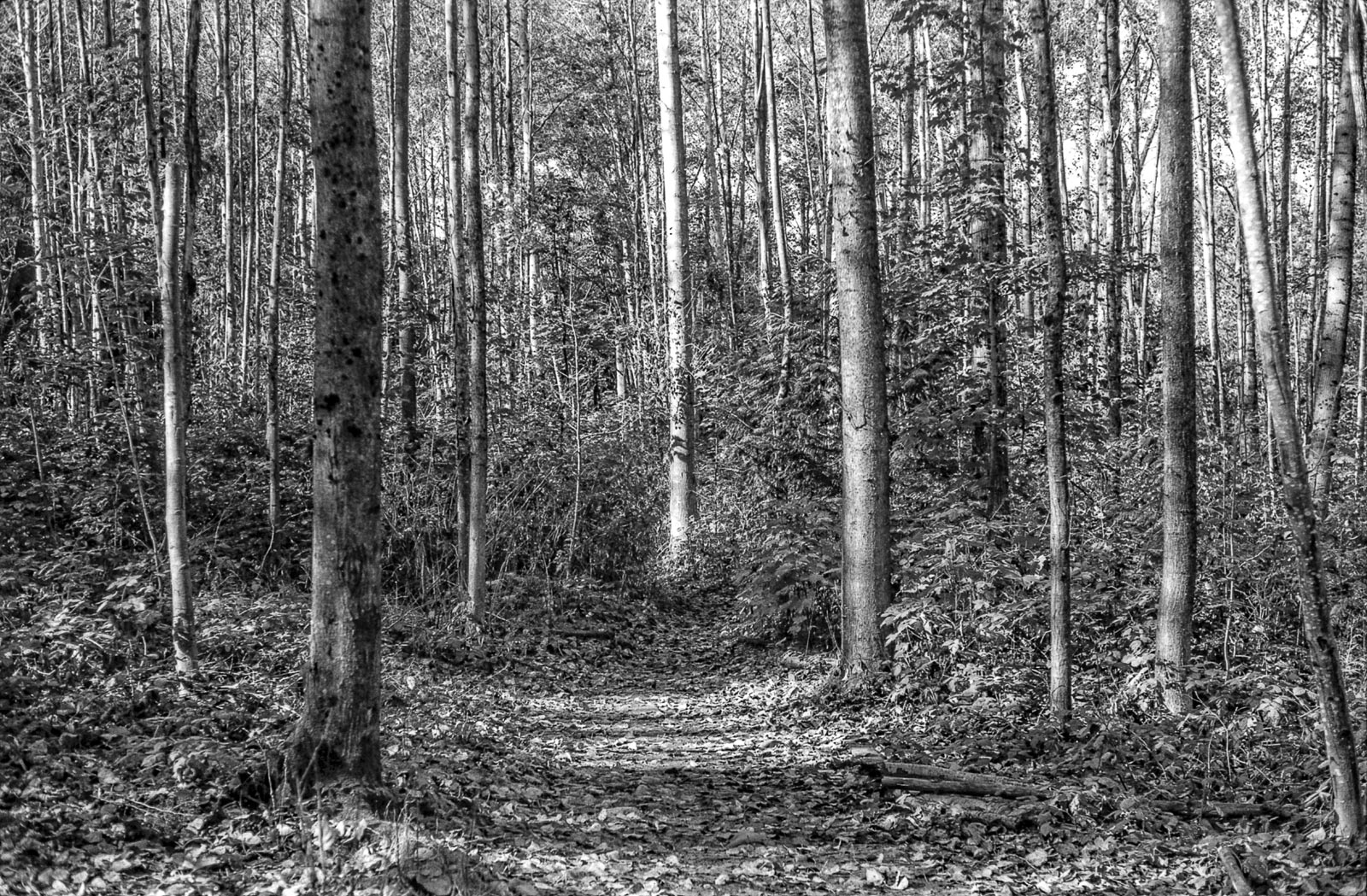