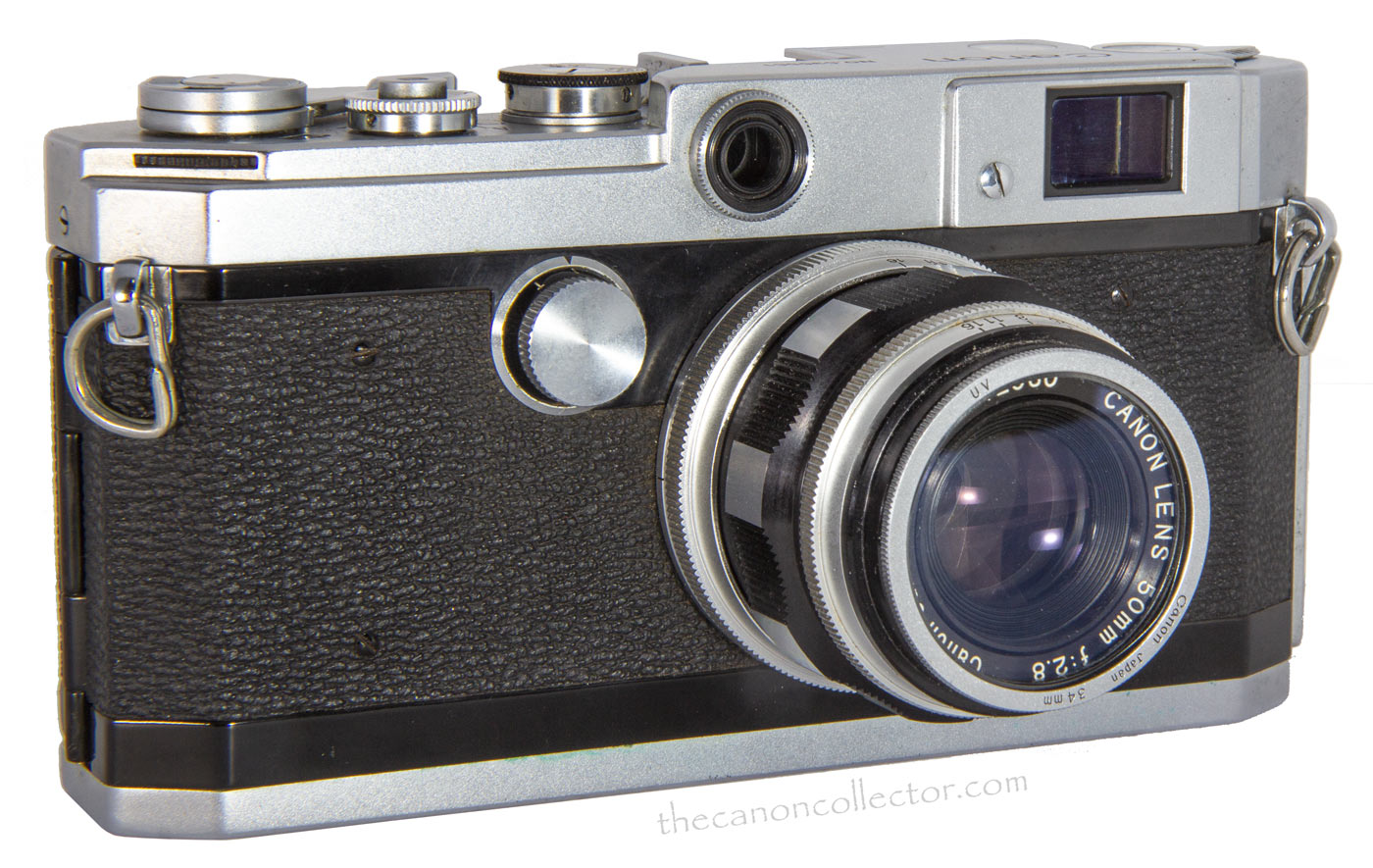 My Canon L3 with the first model of the S 50mm f/2.8 lens. This was intended as a replacement for the older 50mm f/3.5 collapsible lens. 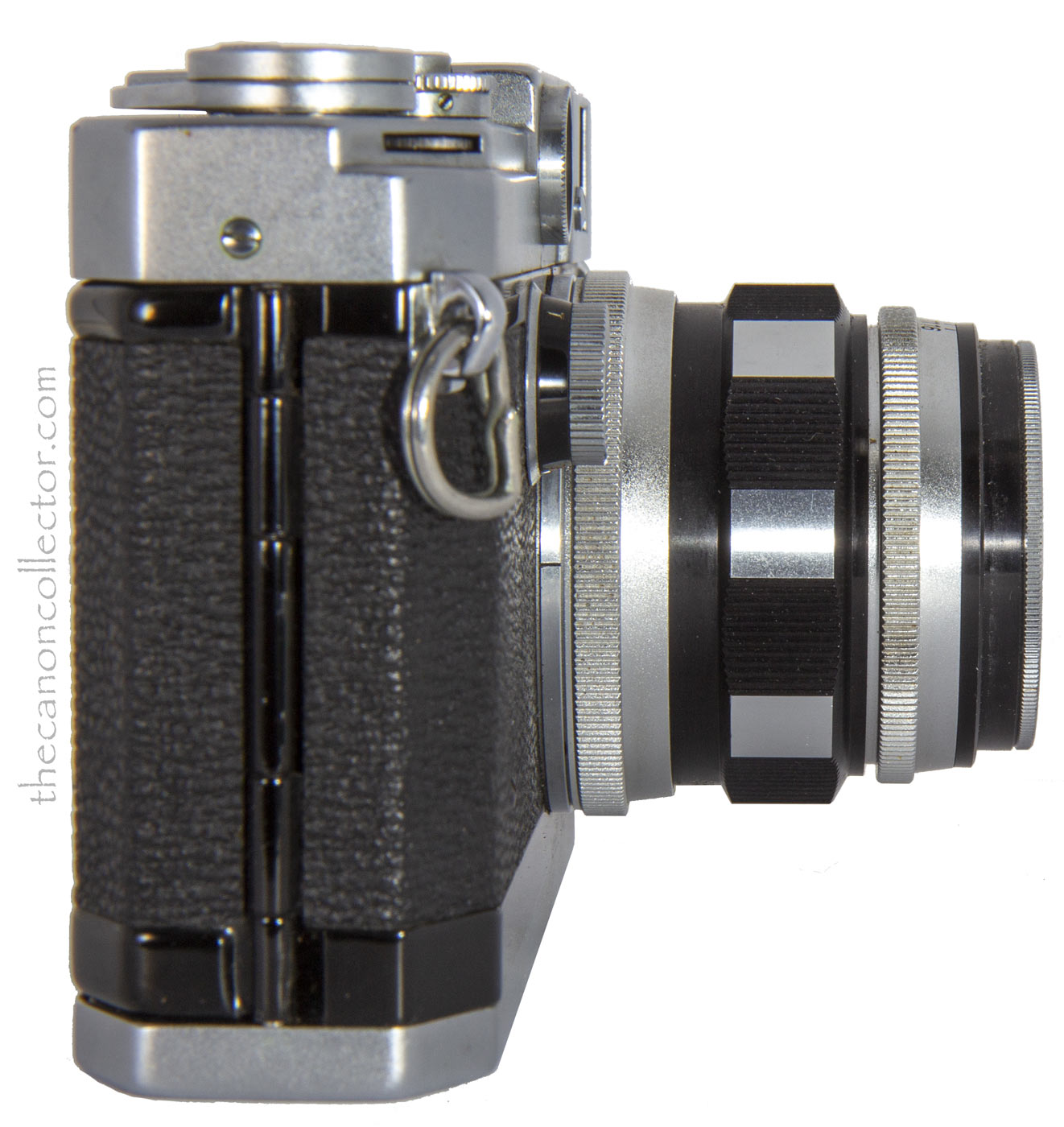 In this side view of the first model mounted on the L3 the “Zebra” package is very obvious and quite attractive..

In January 1955 Canon introduced the first of three 50mm lenses with an f/2.8 aperture. This lens was intended to retire the venerable 50mm f/3.5 collapsible lens which had been one of Canon’s first ‘in hose’ commercial lenses. The new lenses were basically the same lens formula with updated packaging. They were non-collapsible, slightly faster and much more attractive. All three were variations on the same lens with external cosmetic differences. Imaginatively they were called the 50mm f/2.8 (I), (II) and (III).

The first of these three lenses was, as I said, introduced in January of 1955. It is a simple
design of four elements in three groups. It
has an 8 bladed aperture going from f/2.8
to f/16. Filter diameter is only 34mm.

The package is a little out of the ordinary
for the Canon lenses of the time: it is a
“Zebra” with alternating black and silver
sections on the focus ring.

The front of the lens with the aperture ring rotates with focusing so there is a second aperture scale on the other side as well so one is always up and visible to the user. 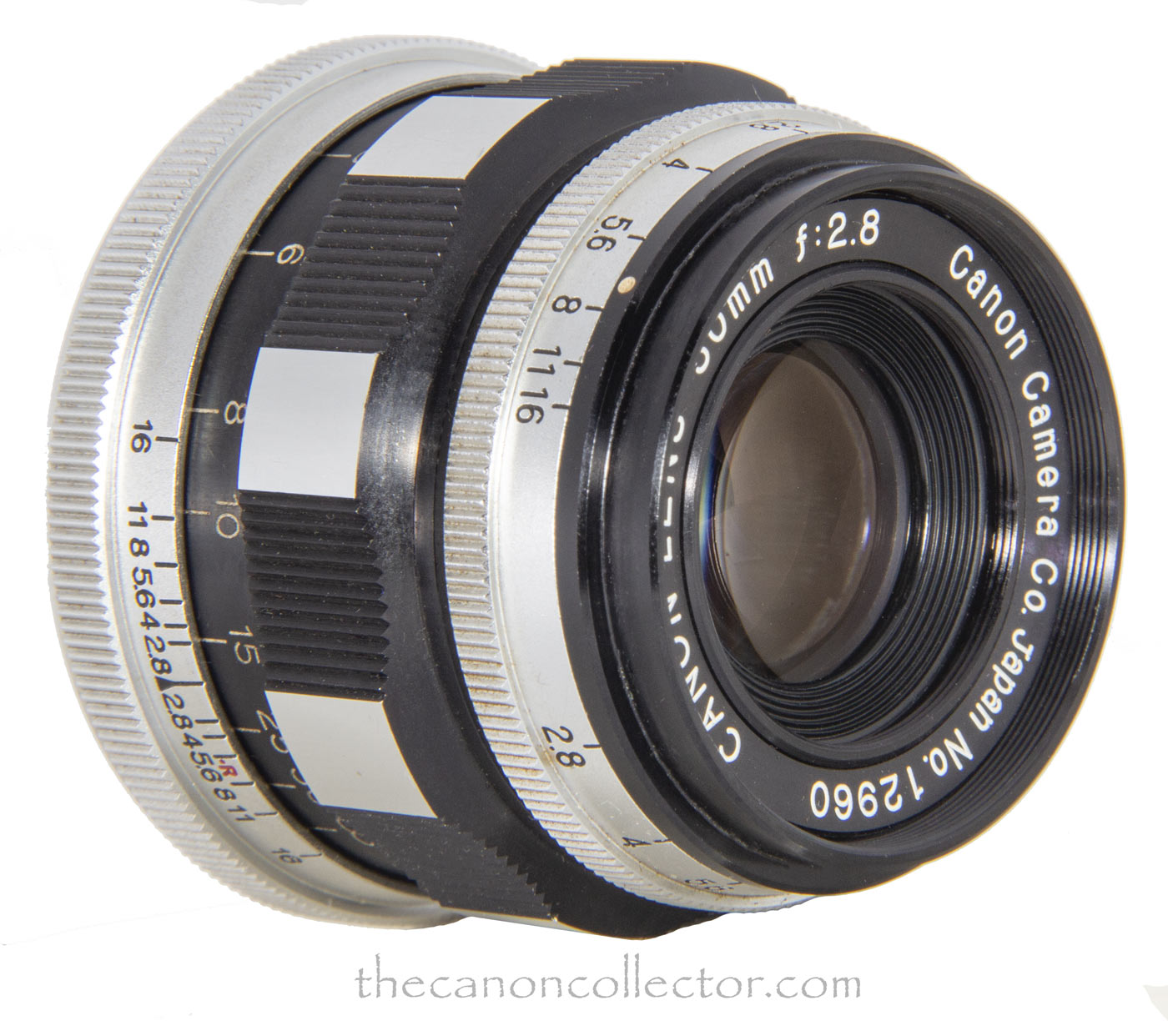 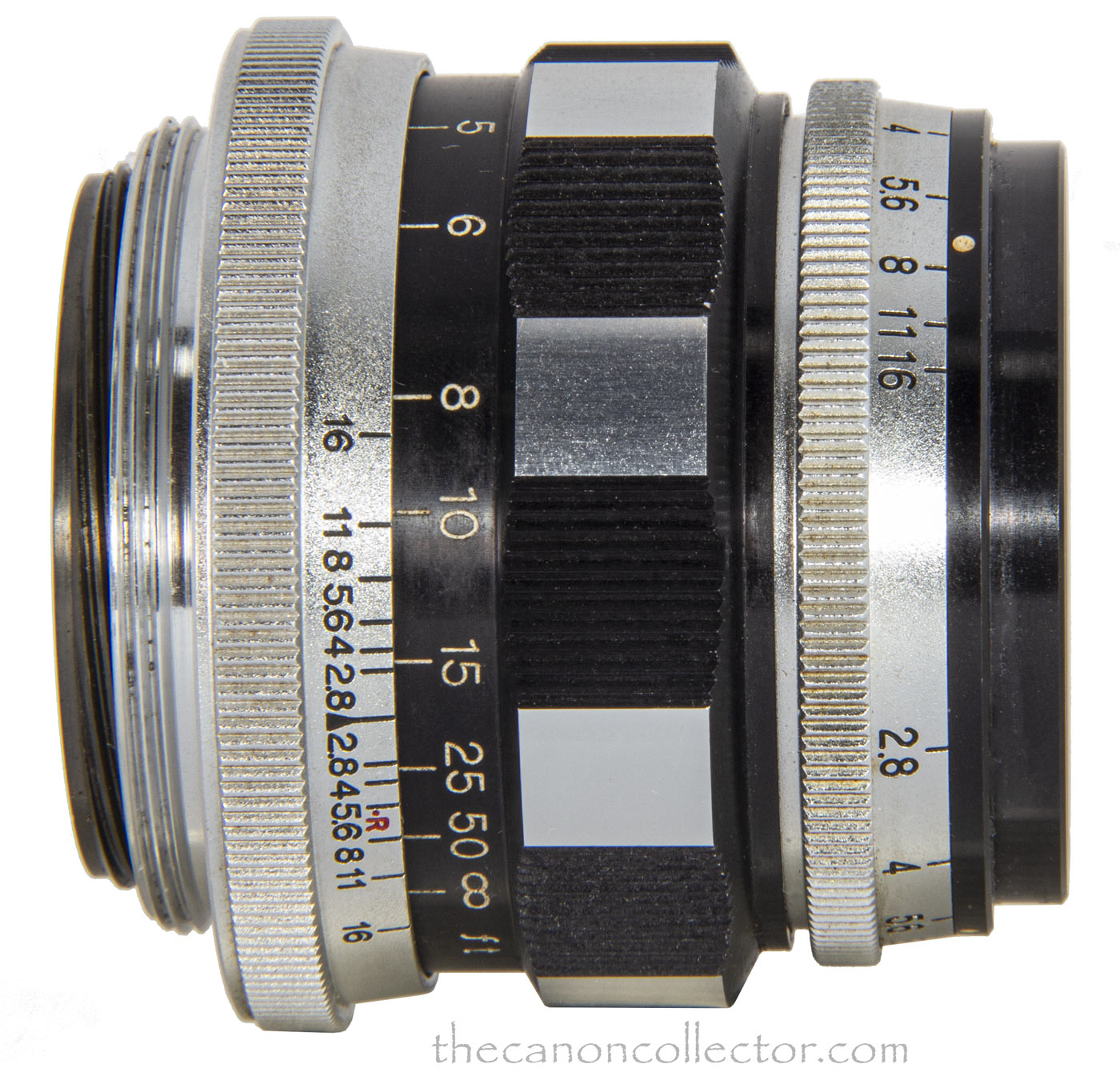 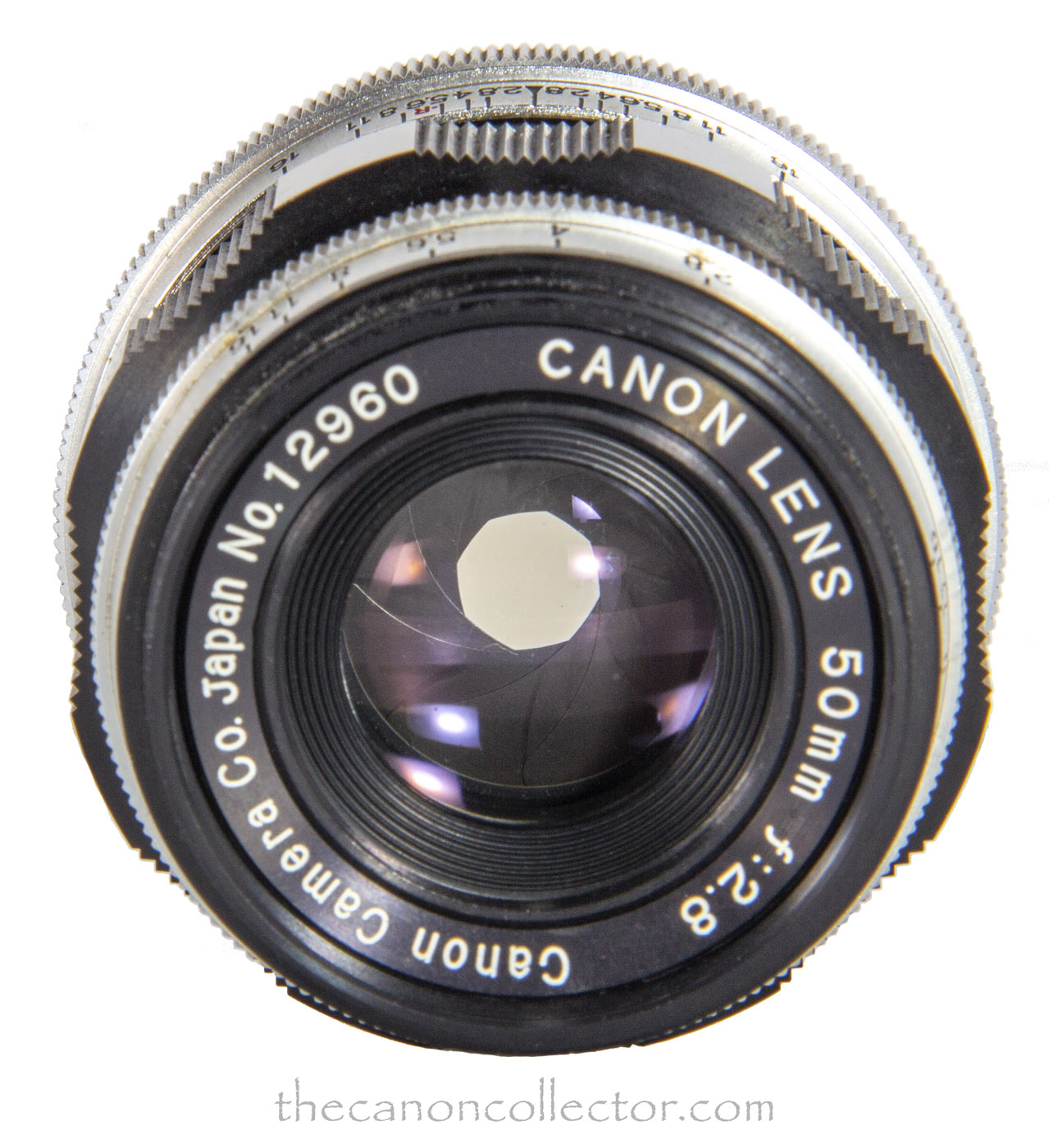 So How Does it Shoot?

I like this lens. It is small and light compared to lenses with wider apertures and as you can see in the diagram on the left it is a very simple design. As I have said before here, I don’t do rigourous tests. I just want to know if a lens can take a decent picture. And you know, this little lens packs a real surprise.

I mounted it on my Canon R, which is my go to test rig, and took it on a walk with Susan. I used the Peak Focusing feature in the camera which made the manual focus a breeze. In fact, it was almost as easy as using auto focus on an EF lens.

I assumed that this lens would take an average picture, low contrast and fuzzy on the edges. This is where I got a surprise. Lets look at one picture. 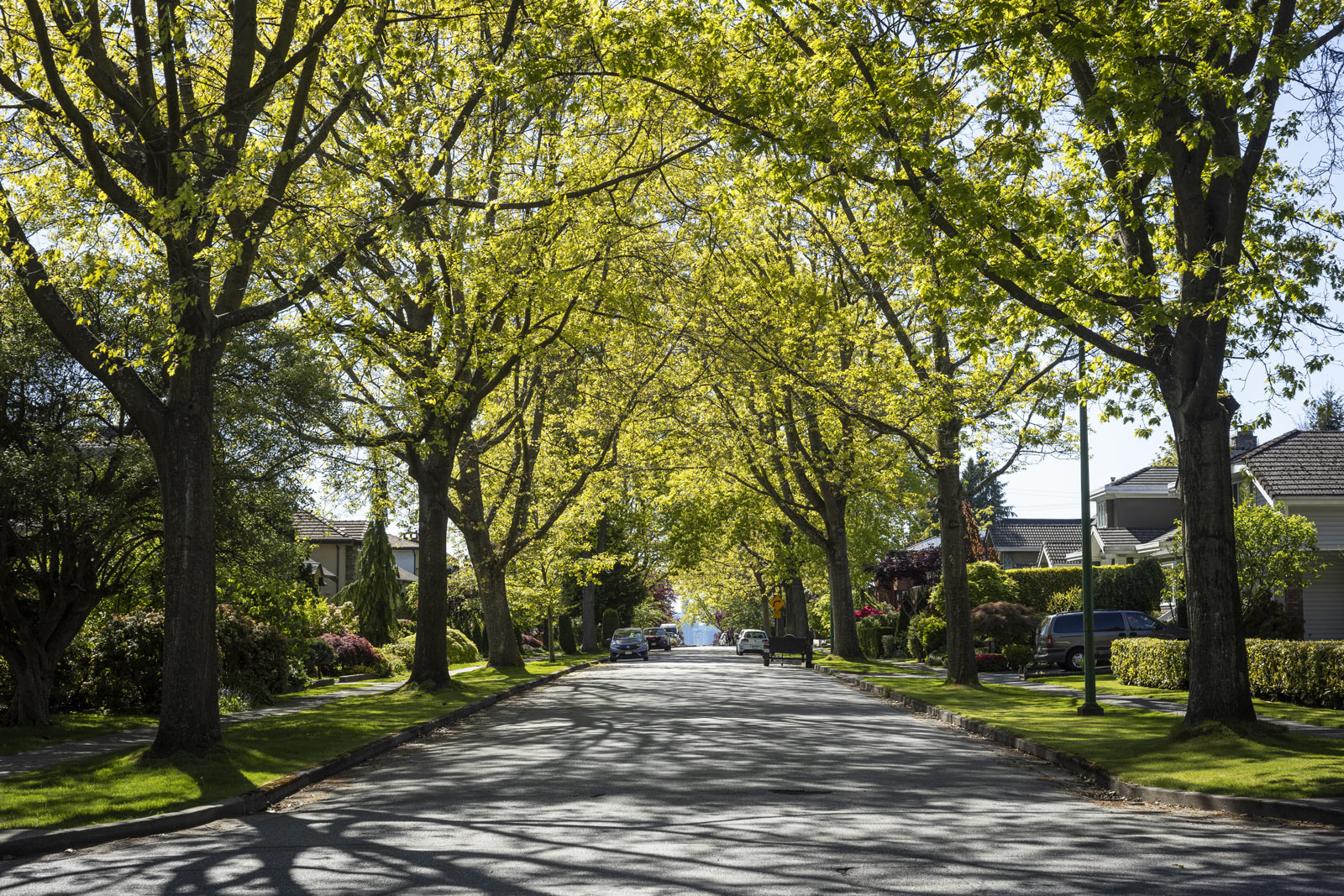 This image was shot on my 30 mpx Canon R with the 50mm f/2.8. It was set at f/8 and the image has been sharpened and tweaked in post. I had to add some vignetting because this lens was uniform across the whole field. Colors were bright from the start and contrast is excellent. 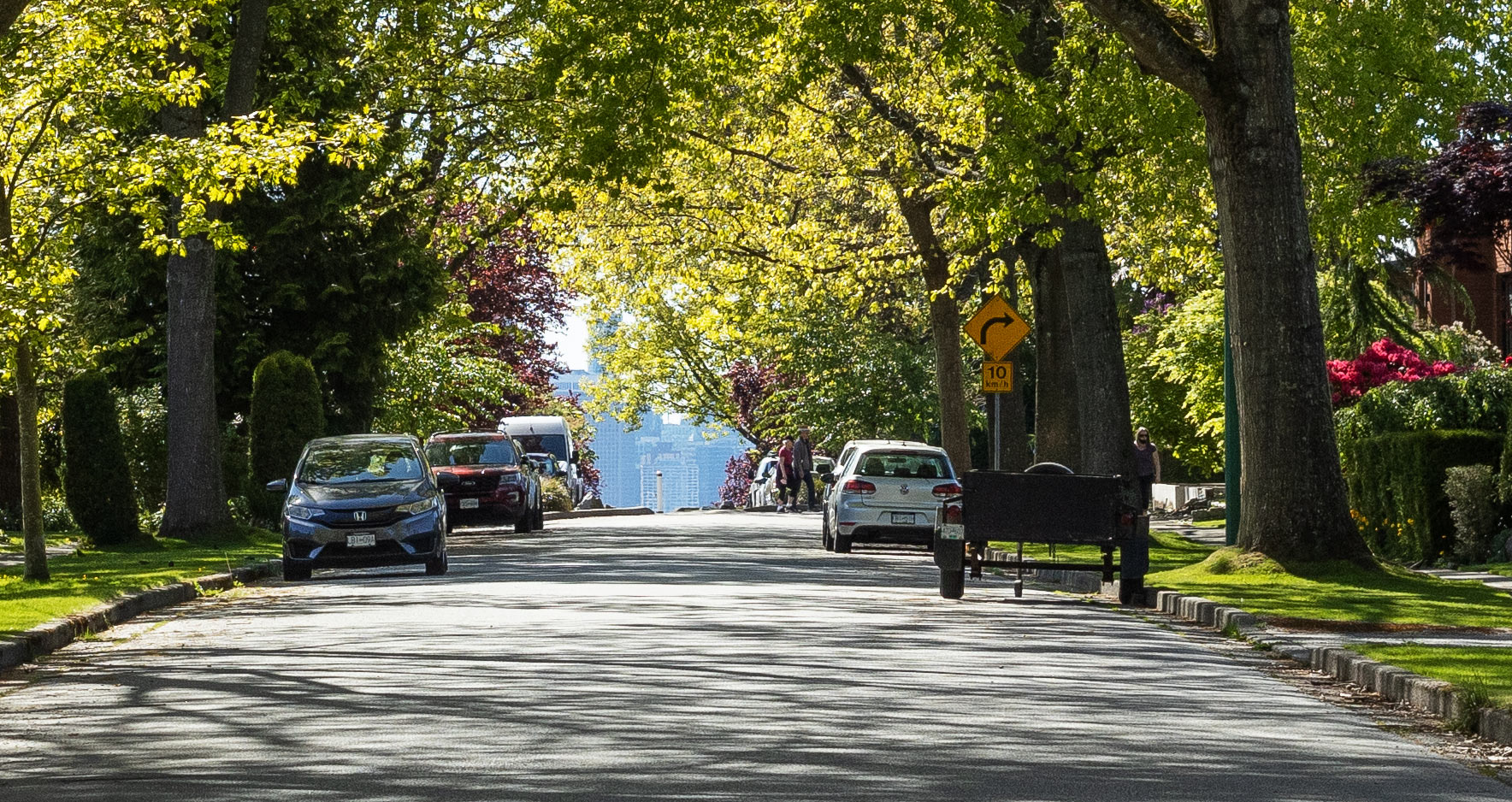 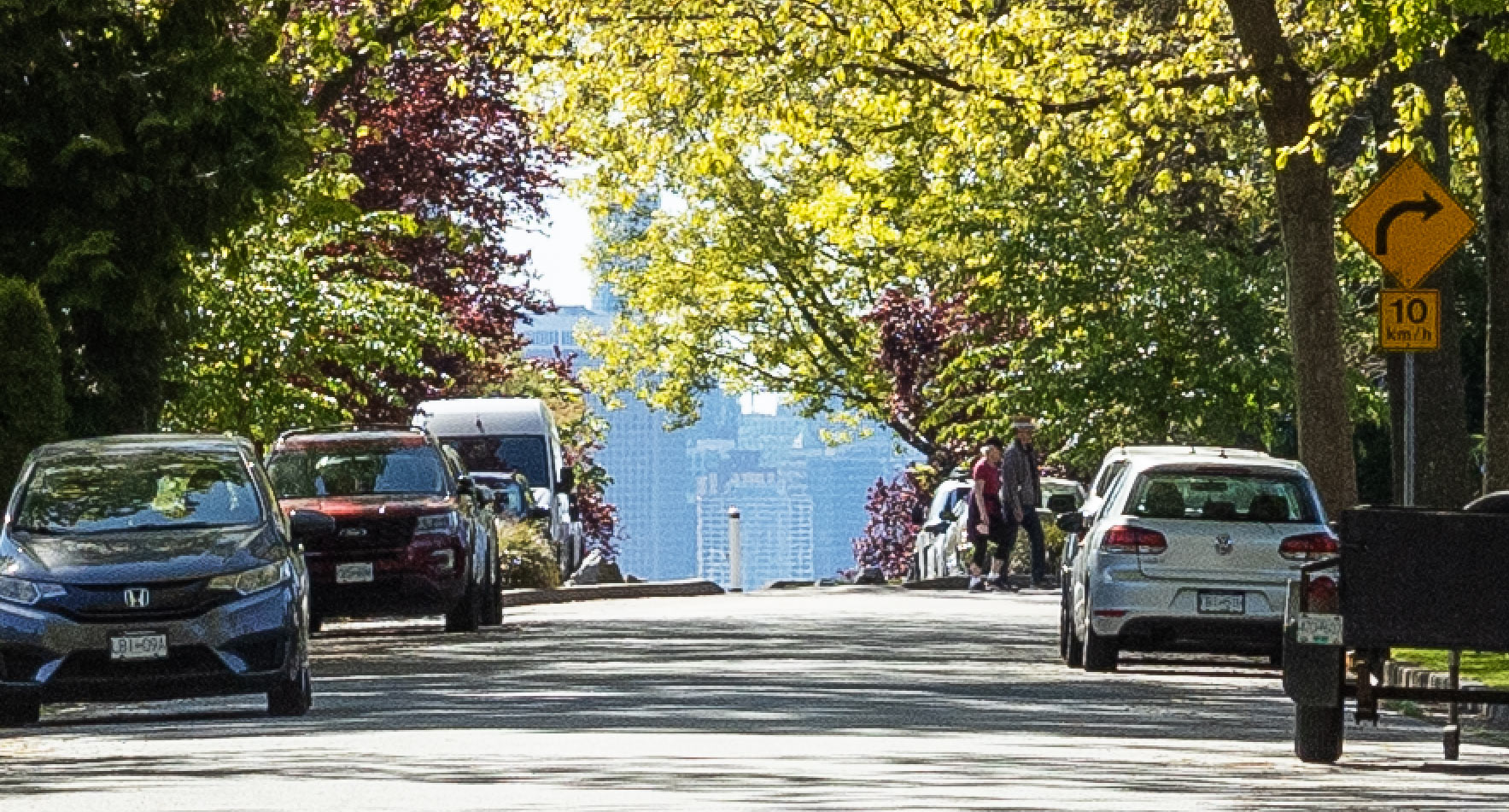 Almost any lens is good in the center. On the left is the center at 100% and on the right at 200%. You can just begin to see pixelation at 200% but notice that the edges are still crisp. The transition on sharp edges is two pixels wide at most. That is as good as any modern lens. It is the edges that will tell the tale. 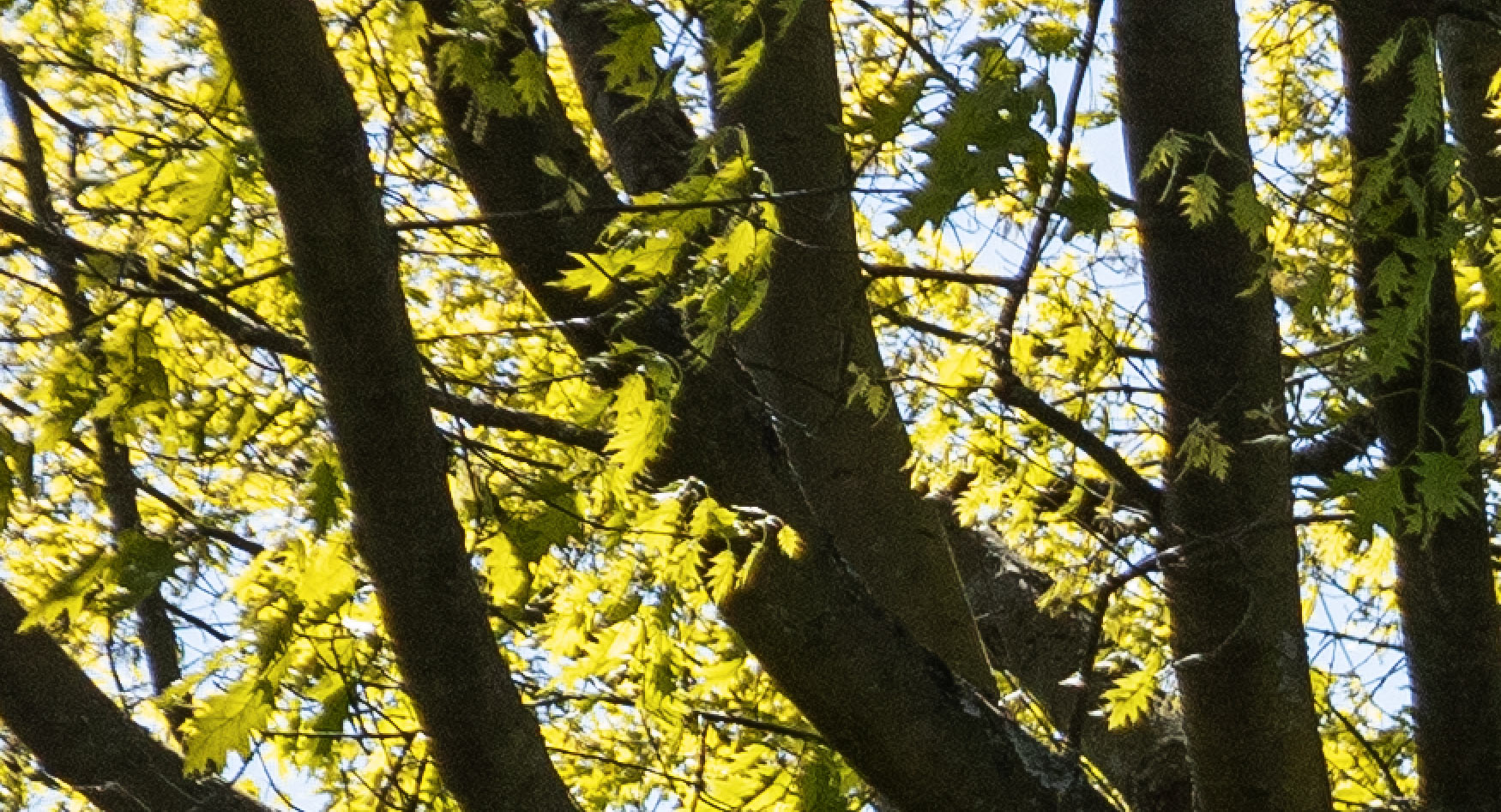 Above we are looking at the upper left hand corner of the image. Again, the left at 100% and the right is at 200%. Yes, in the extreme corner the sharpness begins to fall off. But look at the 200% image. The fall off is only in the extreme corner. By the center of that image, at 200%, the edges are sharp. And more than that, notice the complete lack of color fringing! This lens is really quite incredible. And notice the definition in the really small branches against the blue sky. 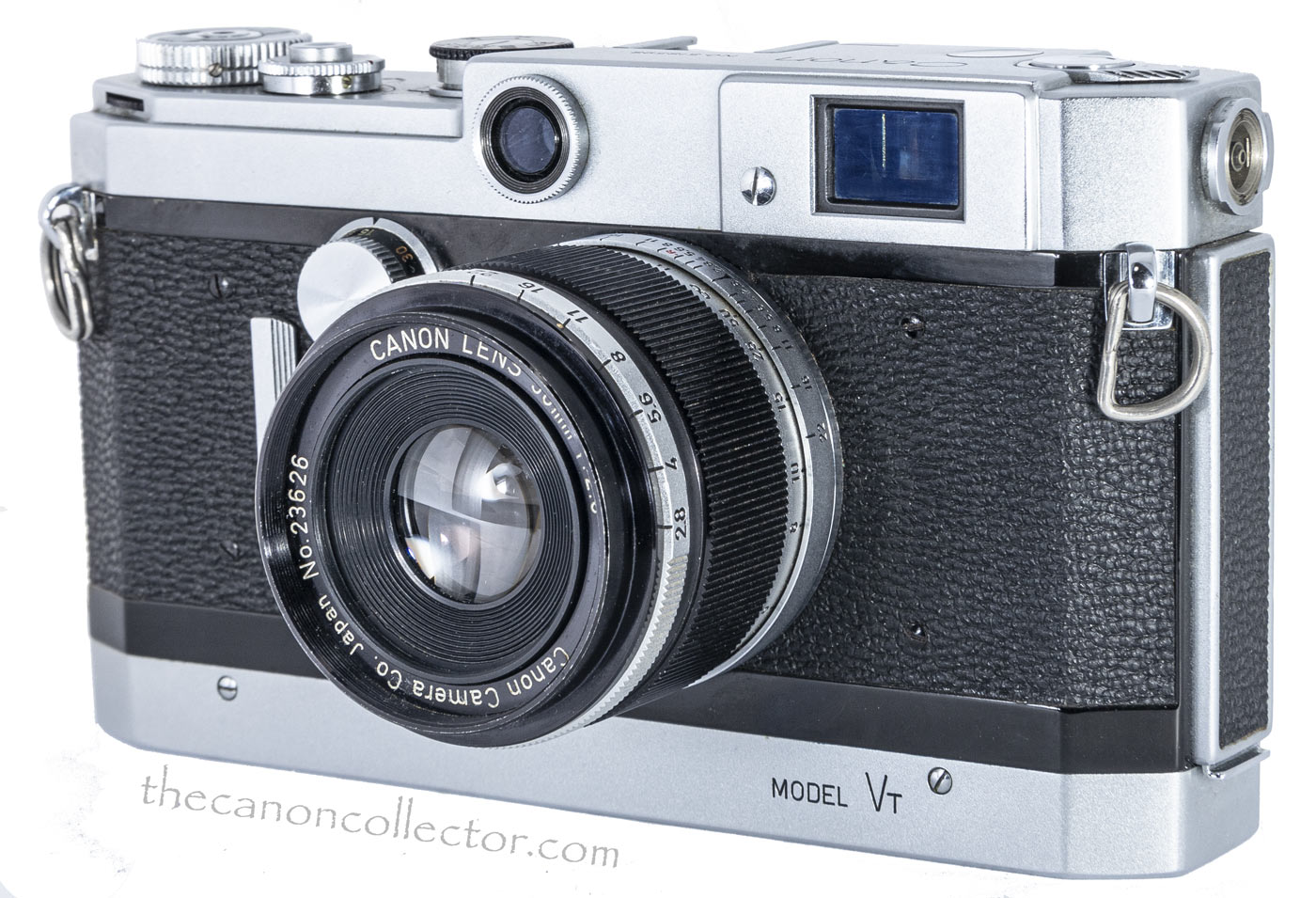 This is my 50mm f/2.8 (II) lens mounted on my Model Vt body. You can see the design is now like others in the Canon lineup of rangefinder lenses. 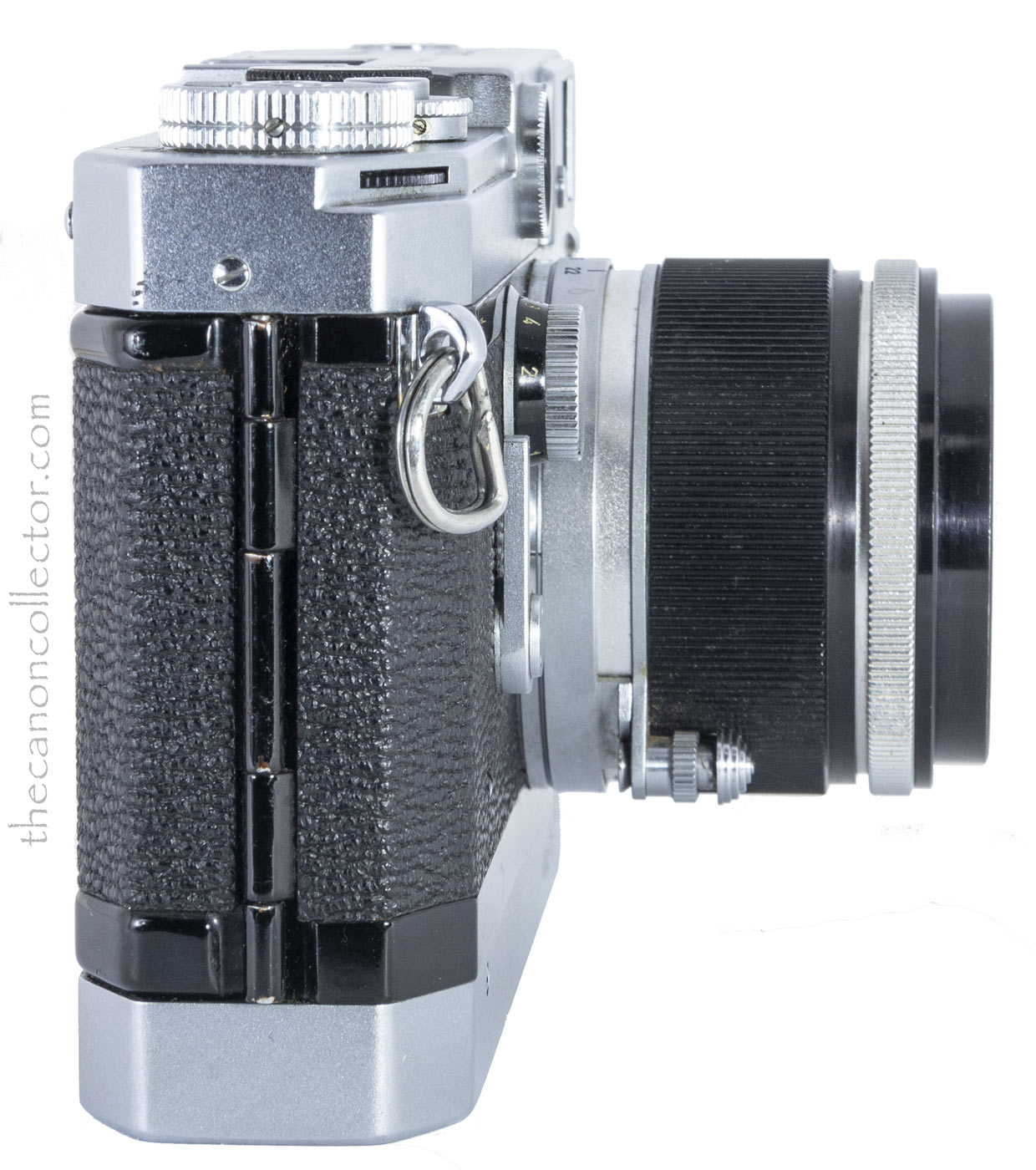 As I have said, I like the 50mm f/2.8 (I). It is a pretty lens with its two color design. However, it did not look like the lenses Canon was producing at the time and it stood out. Possibly too much because in November of 1957 Canon released the second model of the lens and did away with the ‘Zebra’ color scheme. The design reverted to the appearance of the other lenses being produced at the time.

As far as I can tell, the optical design did not change through the three models of this lens,. Yes there was a third model but more of that later. Also the text on the name ring did not change.

The infinity focus lock lug was added to this lens in keeping with others in the series. And the front element did not rotate with focus so a single f/stop scale was adopted. The second one was not necessary.

The diameter of the lens increased probably due to the added complexity of not having the front of the lens assembly rotate when focusing. The filter diameter was also increased to 40mm.

For the first and second model there were special clamp-on lens hoods available  in 36mm and 42mm respectively.

Kitchingman tells us that the first model was produced from about January 1955 to October 1957, the second from November 1957 to January 1959 and the third from February 1959 to December  1959. He seems uncertain about total numbers produced but says that official numbers say about 7500 of all three models combined.

I have not tested my copy of this lens. As it appears to have the same lens formual I assume that the performance will be the same as that noted above for the first version, subject to variations from lens to lens as is normal. 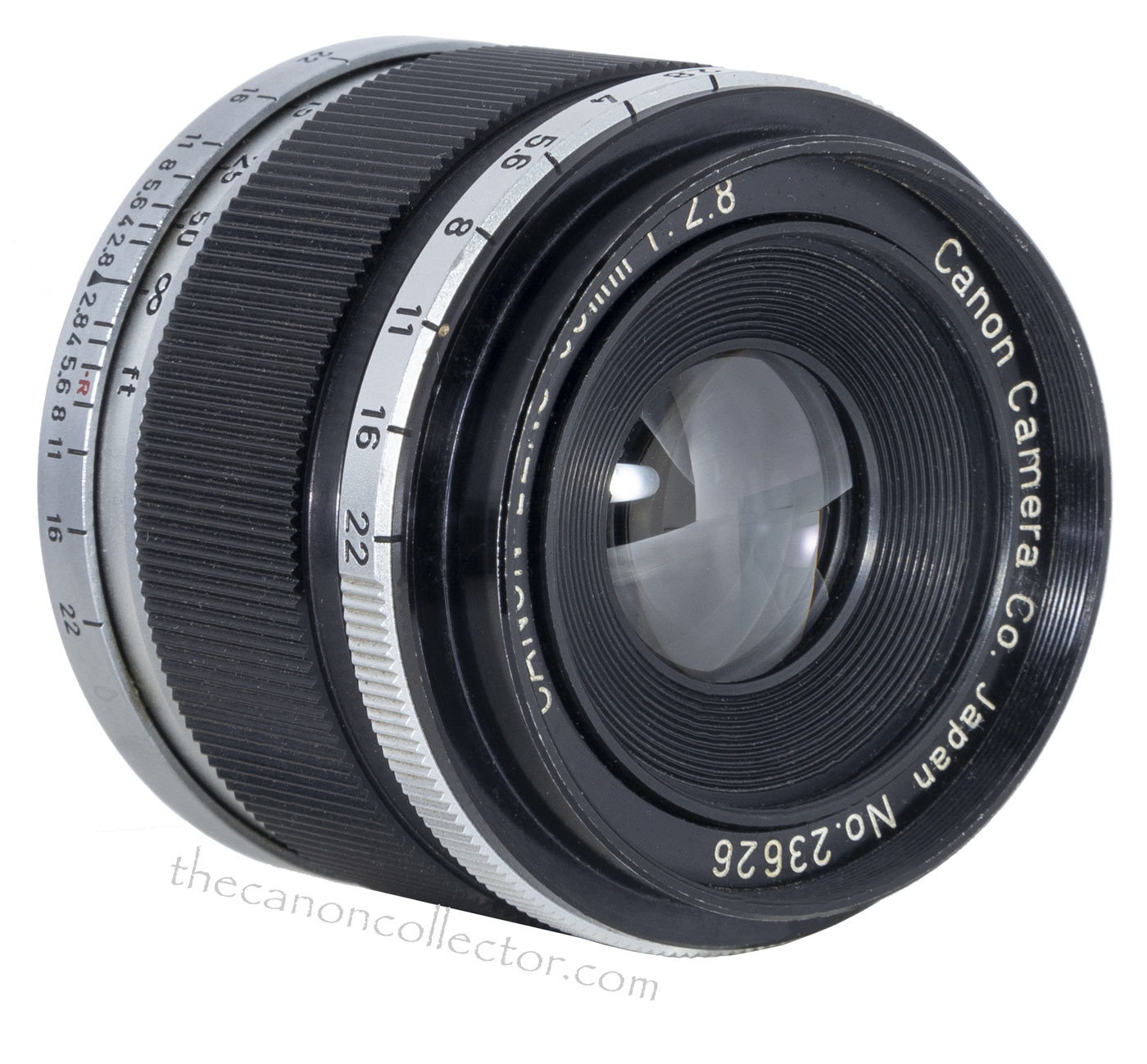 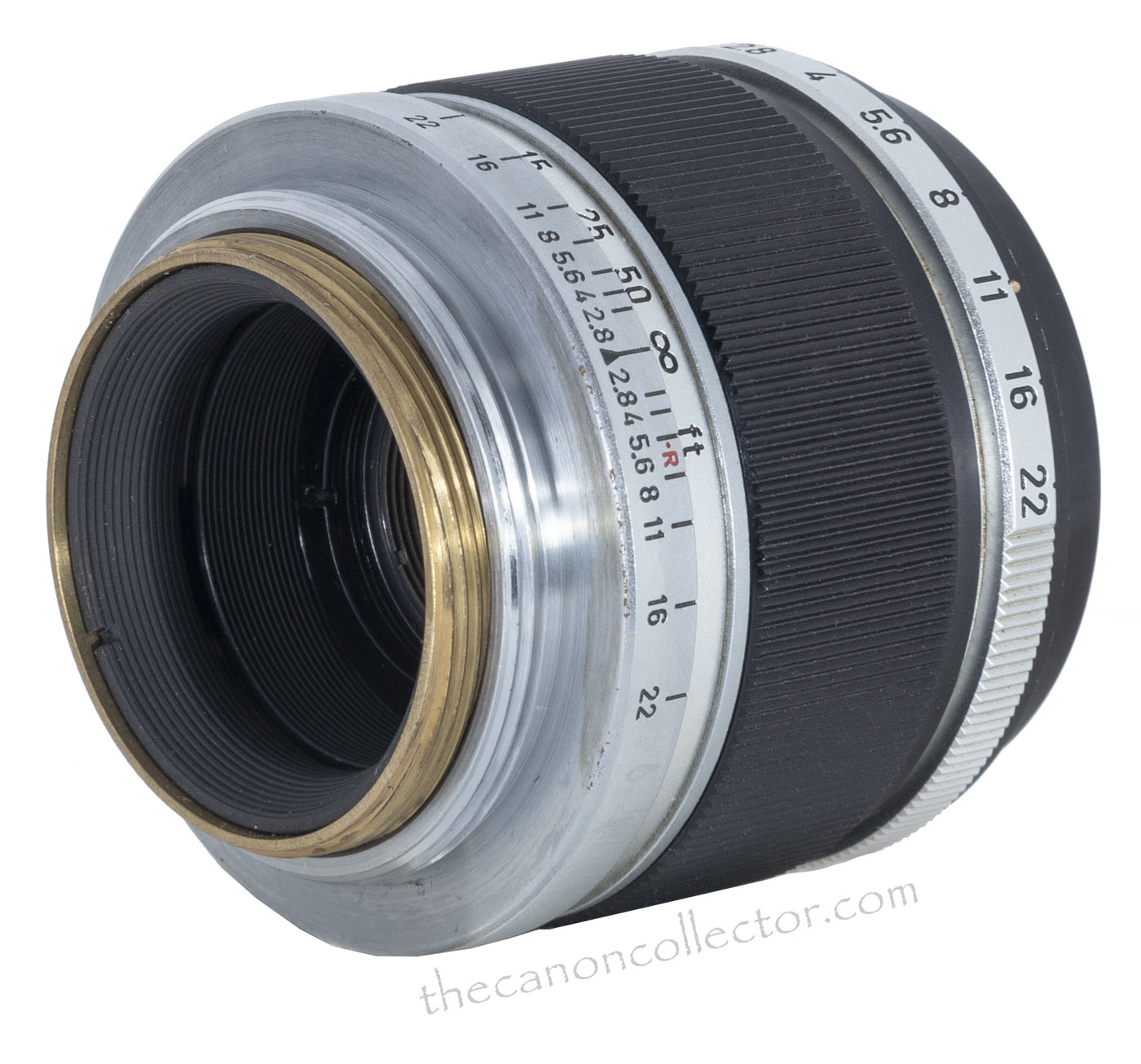 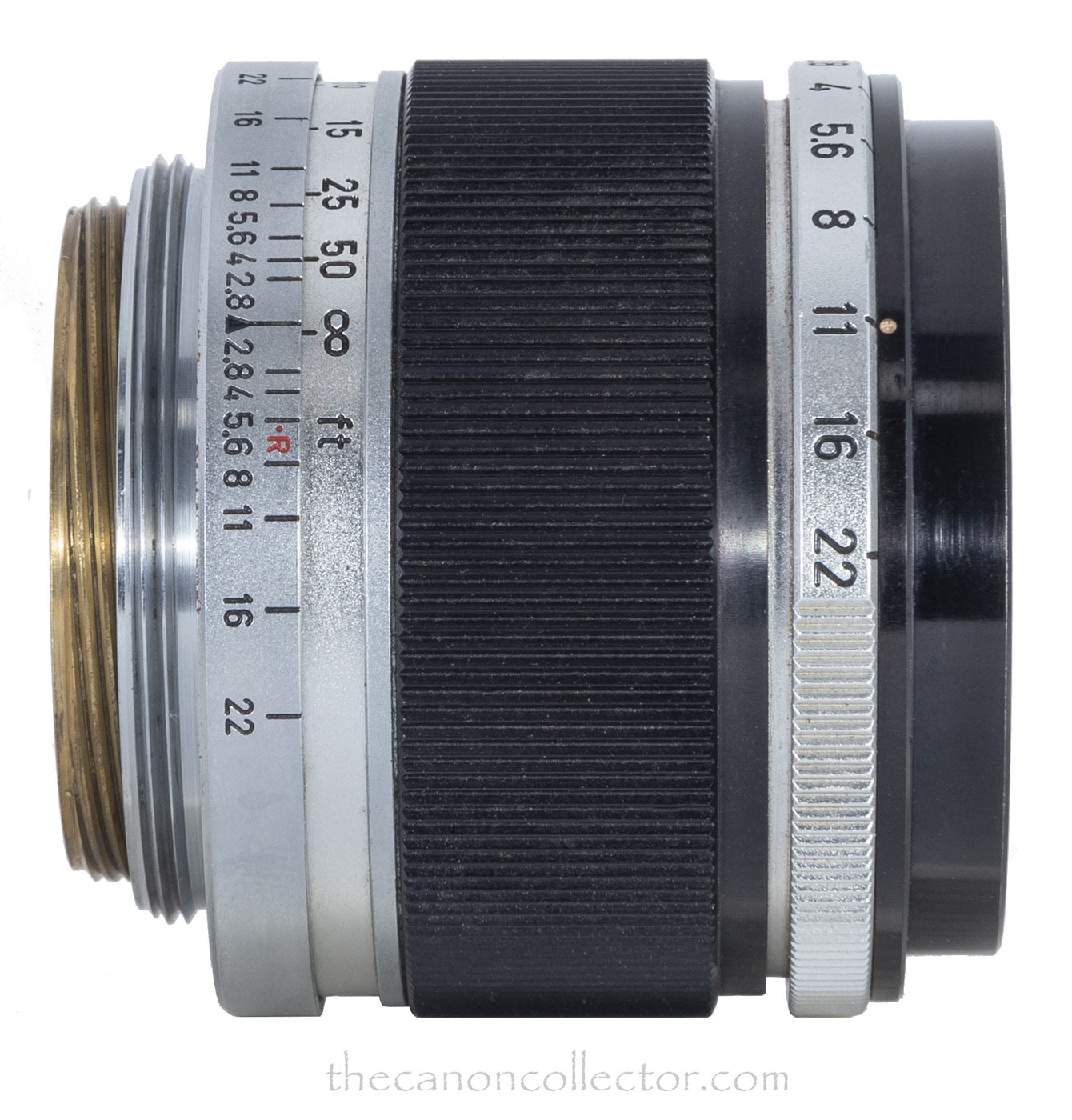 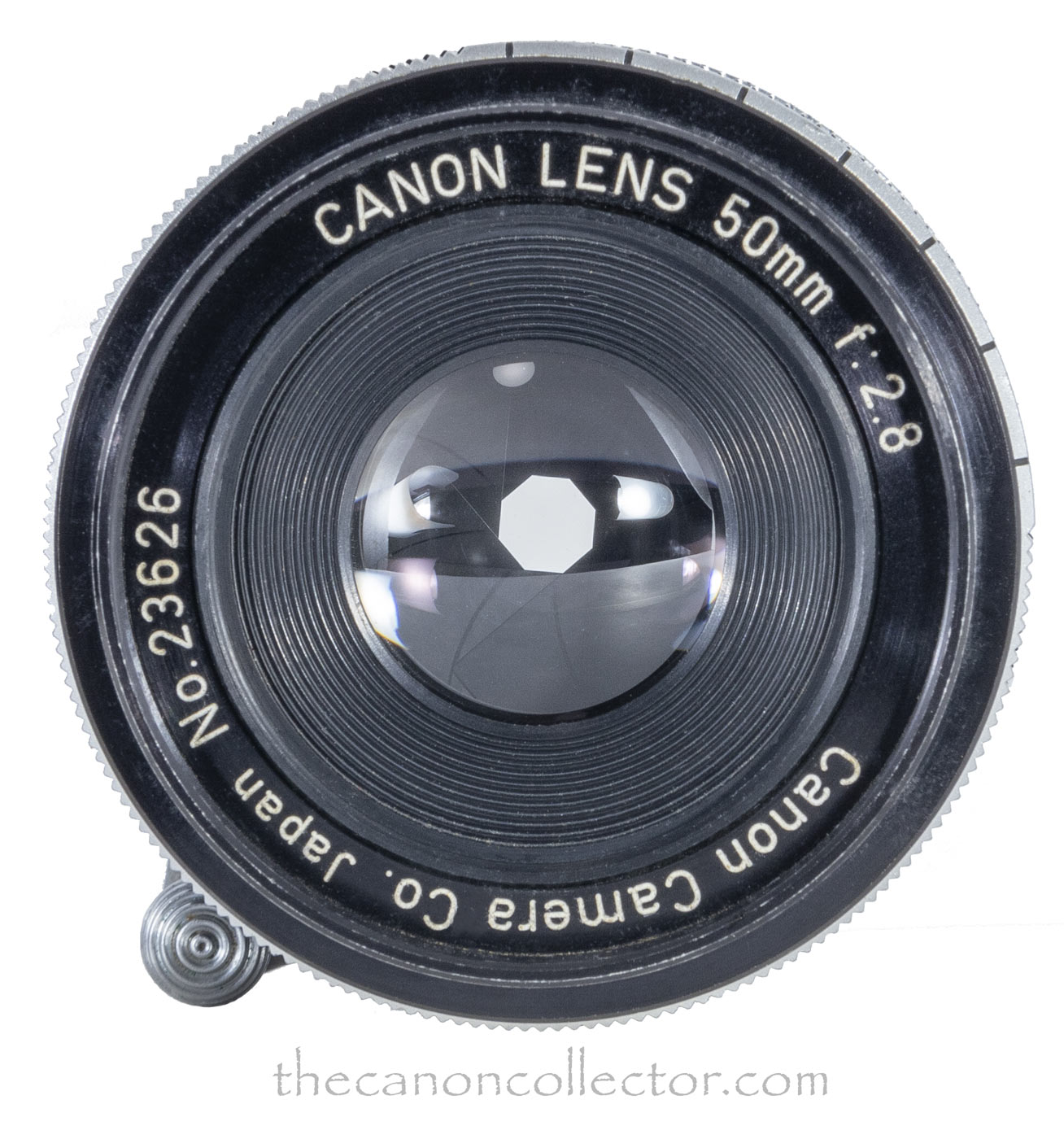 I do not have a copy of the third version yet and I will wait until I do to report on it.