The PX625 mercury cell was a great little battery. Its main feature was its ability to provide a steady stable voltage over its lifetime and then fail quickly when its life was over. This stability made it perfect for use in measuring circuits, such as CdS light measuring devices, where the readings were dependent on voltage. Unfortunately, it also poisoned the environment. It was based on mercury which is a pernicious toxic poison. As a result, some years ago the manufacture, import or same of these batteries was outlawed in North america. I don’t really know about the rest of the world but I assume Europe and Britain did the same. 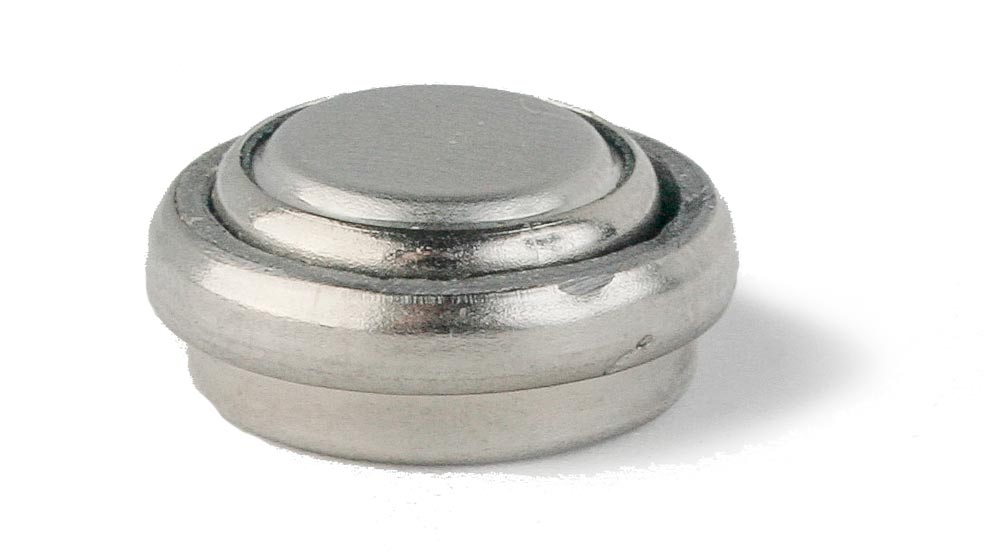 This is the infamous “mercury cell” or PX625. Once you know the shape you will always be able to recognise it. In fact it is a double walled unit. The mercury cell is a straight sided battery placed inside this ridged case and held in place with a plastic ring. 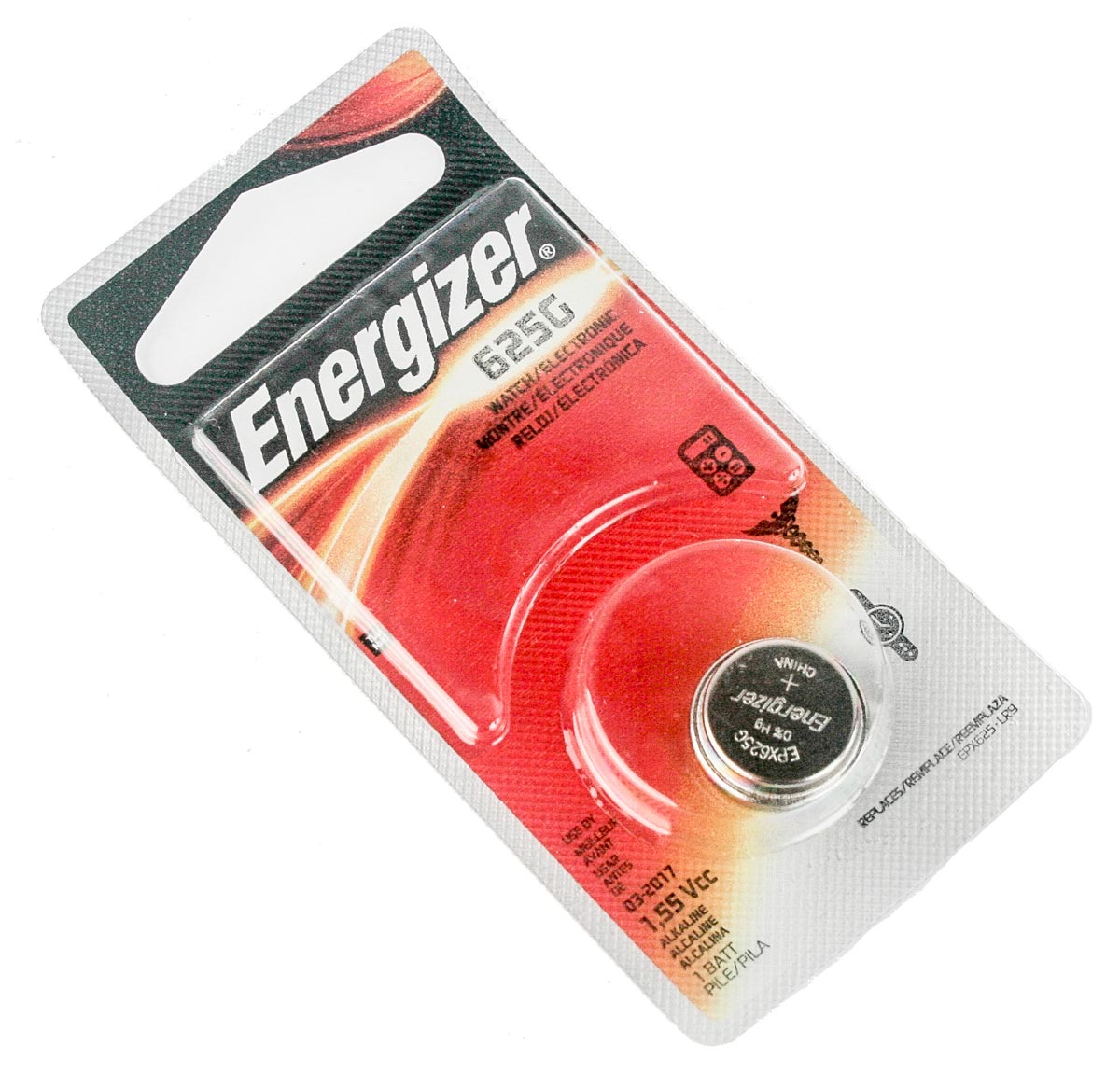 This is the 625G in its package. It is currently available for a few dollars. Unfortunately, it is not a viable option.

In the 60’s and 70’s many camera manufacturers used this cell to power their cameras’ CdS light meter circuits. As the battery is no longer available, the use of these cameras became problematic and most people just gave up on them and put them away, or worse, put them into the land fill. All, that is, except collectors and assorted luddites who found joy in using these old machines.

So, what are the alternatives? I have been interested in shooting some of my old cameras and this desire has brought me up against this problem. Of course, I have done the obligatory internet search and there are all kinds of solutions and much advice.

The first alternative I tried was to simply use a 625G. This battery uses the identical case but internally it is a standard alkaline battery. These were never a first choice of manufacturers because the voltage of alkaline based cells fluctuated with age from about 1.55 volts to 1.3 volts. Light measuring circuits could not rely on a steady voltage. Include voltage regulating circuits drove the complexity and cost of the camera up.

The other problem with this battery is that the mercury cell generated 1.35 volts and that means the alkaline battery delivers too high a voltage, about .2 volts, at the beginning of its life and too little at the end by about the same amount. To see what this actually meant I took one of my F-1’s and put a 625G into it. I then measure the light in a scene. Then taking several of my EOS DSLR’s I got what they thought the reading should be and I found the F-1 to be overestimating the light by one full f stop. I can compensate for this if the battery keeps a constant voltage, but, as we have discussed, it does not.

Some cameras have circuits that will adjust for this voltage difference. One of these is the Pellix which seems to give the correct exposure reading with the 625G. I have heard that some Canonex cameras will accept this battery without exposure adjustment. But I know that the F-1n does not like this battery.

There is an alternative suggested on the internet that seemed to be the answer. Zinc-air batteries are powered by oxidising zinc with oxygen from the air. These batteries have high energy densities and are relatively inexpensive to produce. They have holes in the back of the case that admits air into the cell to react with the zinc. 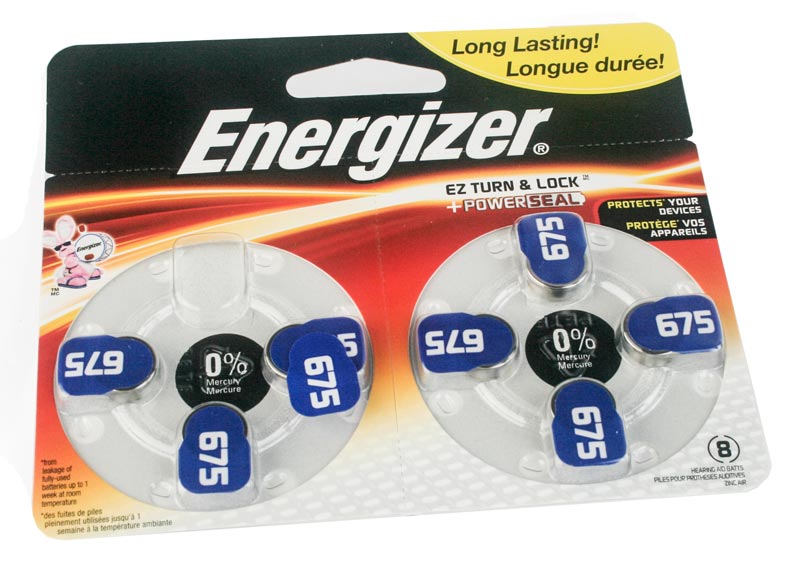 The 675 usually comes in bubble packs and it works out that they cost each about one dollar. In the pack they each have a sticker covering the whole back to keep air out of the holes on the back. So long as the sticker on their back is not removed they have a good shelf life. 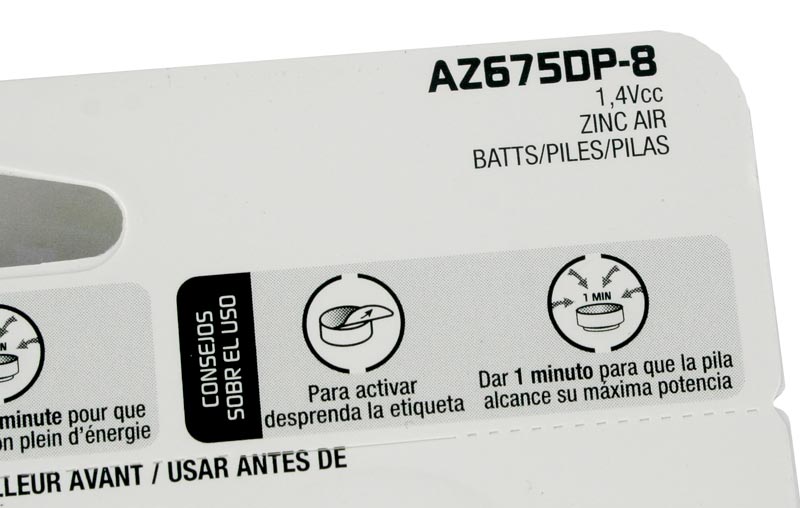 On the back of the pack the nominal voltage is given as 1.4 volts which is close enough to the PX625’s 1.35 volts for our purposes.

And the characteristics of these cells are promising. They output 1.4 volts (perfect!) and their output is constant throughout the life of the battery (also perfect). Almost as good as the PX625 mercury cell. I see on the internet differing estimates of the life time of these cells in use ranging from 3 months to a year. But that is offset by the fact that they are not expensive; about a buck each.

The cell that seems to be used is the 675 zinc-air battery. It normally comes in multi-packs. Each cell has a sticker on the back to keep the air out and so long as the sticker is not removed the cell has a shelf life of years. The problem with the cell is that it is too small in diameter and not high enough for reliable contact in the camera.

Following what I found on the internet I took a dead 625G (not the mercury cell) and cut the top open and hollowed it out. To raise the 675 in the case I folded a piece of tin foil and tamped it into the bottom of the case. Then I dropped in the 675. The fit was loose but the height was right. I should have done something to tighten the cell in the case but I was in a hurry to try it out. I dropped it into my F-1 and it worked as I had hoped.

I then replaced it with a 625G alkaline cell and the reading was one stop higher, just as it should be. Success!  All I had to do was add tin foil around the sides to make the fit a little more snug and I was done. I would be able to change the 675 cells as they expired and use the unit in any camera that required a mercury cell. 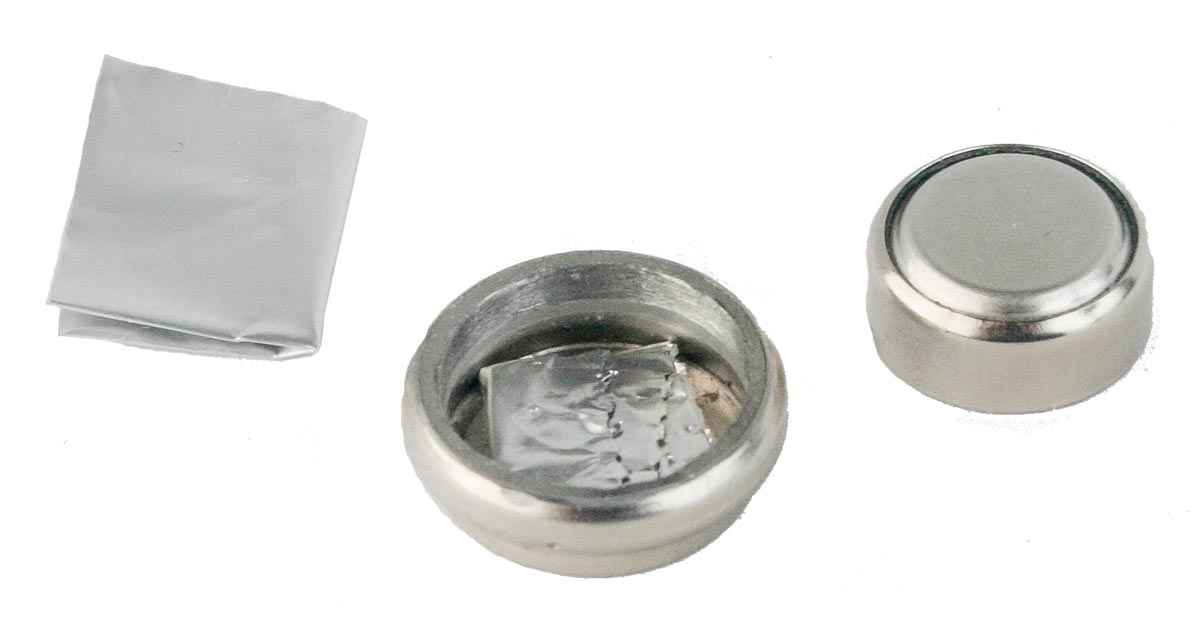 On the right is a straight walled 675 cell. You can see that it is not as wide as the case in the middle which is the hollowed out 625G. On the left is the little pad of aluminium foil I tamped into the bottom of the case. The 675 dropped into the hollow case but was a little loose. The total height was the same as the PX625. 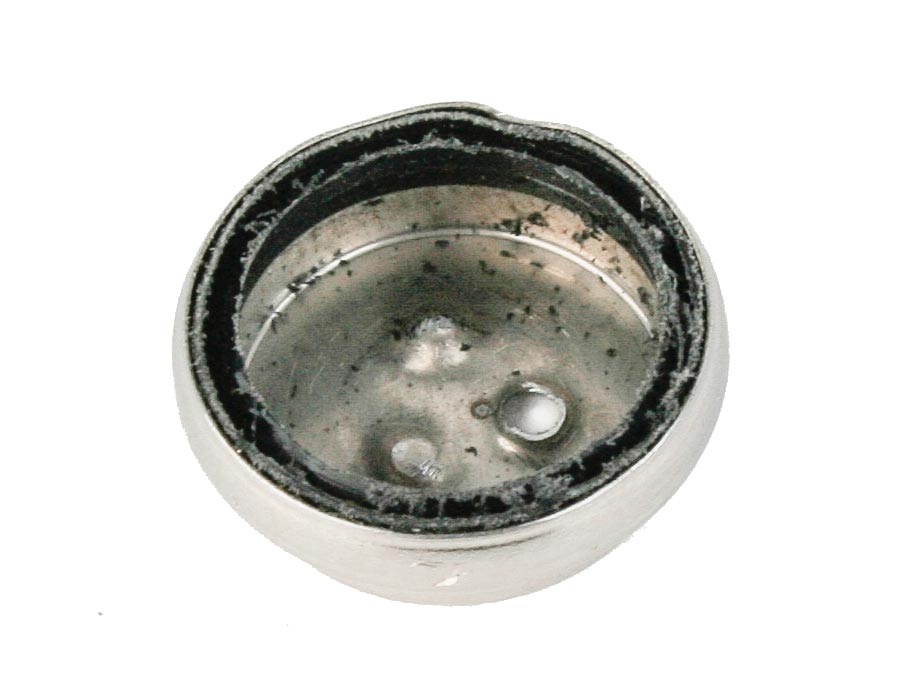 Here you can see the “dimples” I have put in the bottom of the case to raise the height of the 675 in the case. One of these dimples actually punched through the case leaving a hole which is probably a good thing as it will allow essential air into the case.

So I had a unit that worked. But as I was reading I saw the suggestion that the tin foil would obstruct the air passage to the zinc-air cell. Hard to imagine when you look at how small the holes in the cell were but … maybe. I found a suggestion to not use foil but to punch dimples in the bottom of the empty case to raise the zinc-air cell to get the right thickness and once the cell was off the bottom of the case, air could circulate. Good plan.

I didn’t have another 625G so I decided to hollow out a PX625 mecury cell. Yes, there is mercury in them. A small amount of liquid mercury ran out of the case as I cut it open. (Mercury is very toxic. I hollowed out the case, wiped up the inside and the lose mercury and bagged it all for the toxic recycling people, And I washed up thoroughly. If you do this yourself, do the same and be very careful.)

I found that the PX625 mercury cell is a separate cell inside an outer case and the two are held together by a plastic insert between them. I was able to lift out the inner mercury cell and leave the plastic inner liner. Then I used a center punch to create the three dimples in the bottom. On one dimple I accidentally punched right through case bottom creating a hole. As it turns out, all the better for air flow.

I carefully reamed the plastic liner until the 675 battery pushed into the case snugly. I then put the whole unit into my F-1 and again it worked like a charm. Below is a photo of the assembled unit. 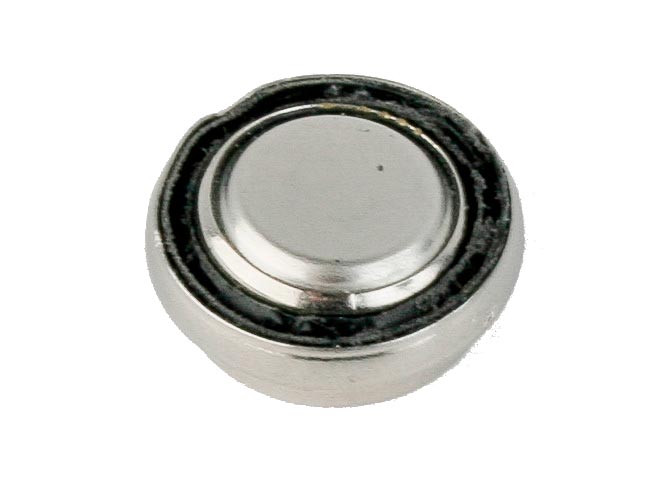 This is the assembled unit with the 675 battery inside the PX625 case. You can see that the plastic liner is a bit raggedy and I dinted the edge of the case while removing the inner mercury cell. But, still, it works like a hot damn!!!

Since I wrote this post I have shot a great deal of film in my F-1 and my AE-1 simply using the 625G and I have had no problem.  I find that the Ilford film I use has sufficient latitude to absorb any difference introduced by the extra .2 volts (15% over voltage). After making this adapter I have never used it and my negatives are fine.

So, do your own testing but I think you can safely use the 625G and forget the difference in voltage letting the film accomodate the exposure difference.

For a more exact replacement try the zinc-air WeinCell MRB625. These do not last as long as an alkaline cell but the match to the PX625 is much closer.

Shooting with my TLb I was testing the light meter in the camera against my Sekonic L-358. The readings always seemed to be around a half to a full stop different. This was using an alkaline 625 battery.

I then mounted the camera on a tripod and with the 625 cell took a light reading. Without moving the camera I then replaced the 625 with a Zinc-Air 675 cell mounted in the above adapter. (You have to remove the tape covering the holes in the battery case to allow the air to enter. It then has to diffuse into the cell before a stable voltage is obtained so I left it for an hour or more before doing this test.)

The reading on the light meter was reduced (as one would expect with the lower voltage) by almost exactly one stop. This change brought the camera and the Sekonic into very close agreement. So there was a significant increase in accuracy.