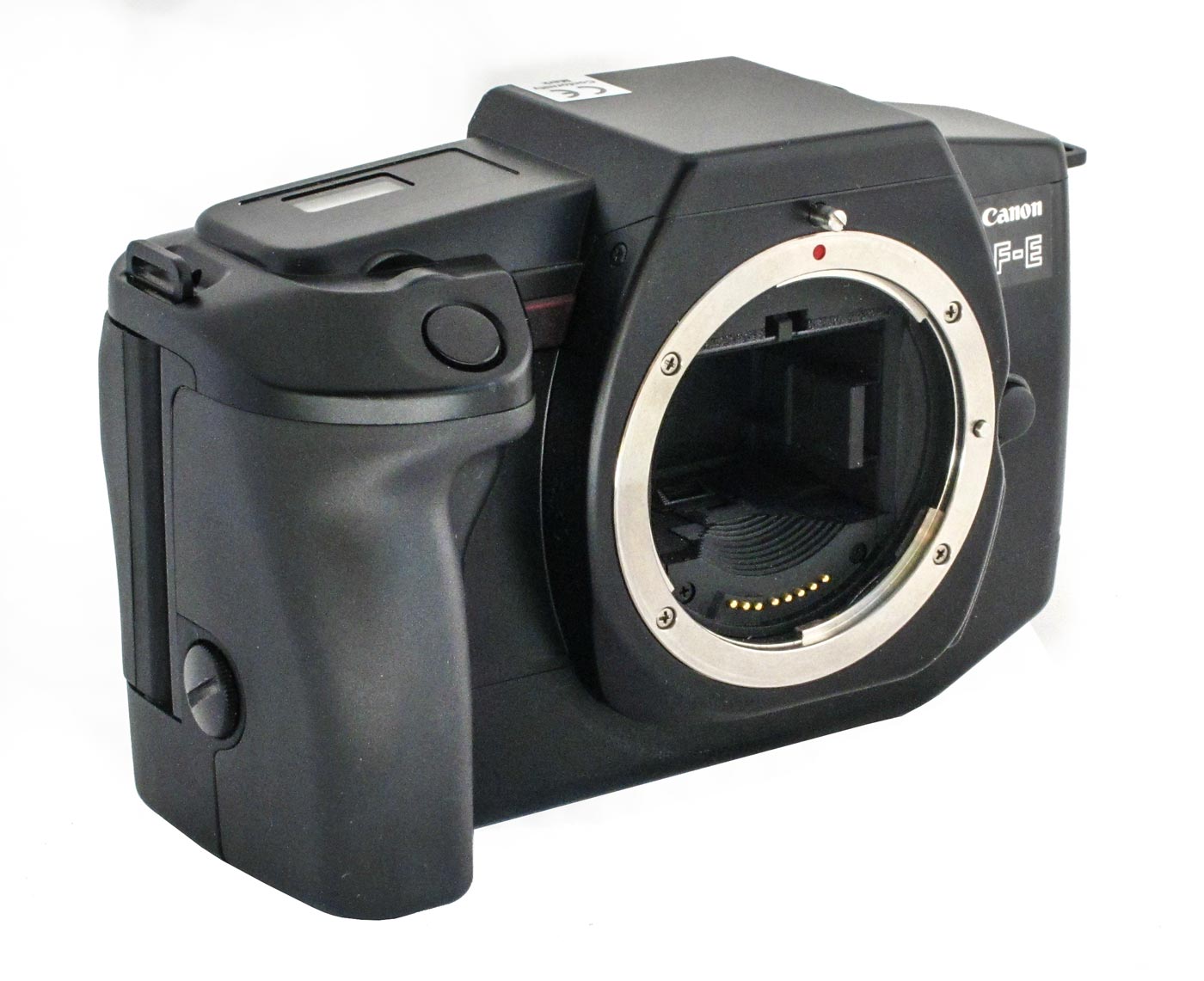 The obvious features of the F-E are the EOS lens mount and the lack of a prism. The general configuration suggests a Canon 650 SLR from 1987. 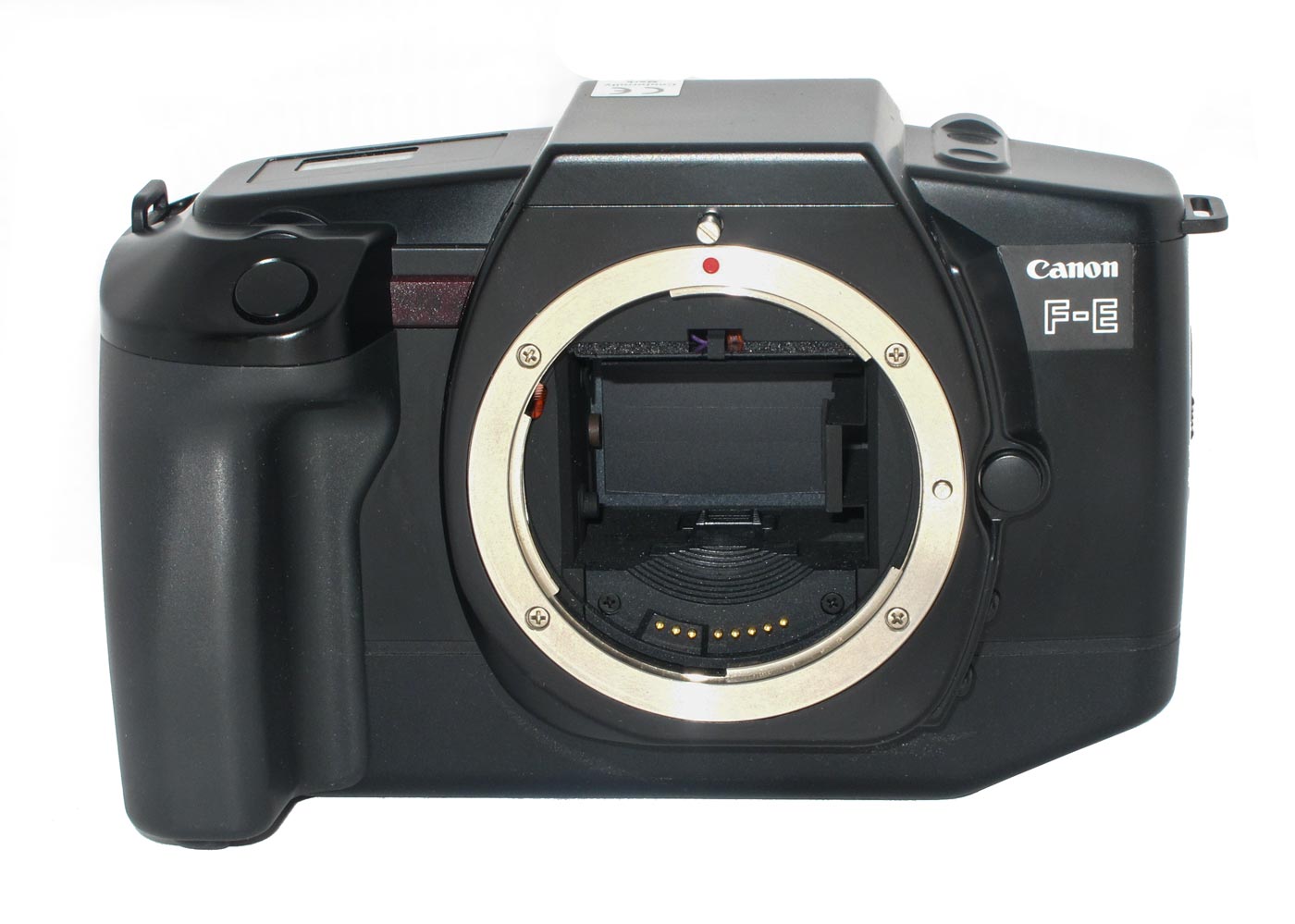 The “Canon F-E” label on the right side is a sticker applied to the body. At the top of the lens mount is a pin probably for locking the alignment of the camera. 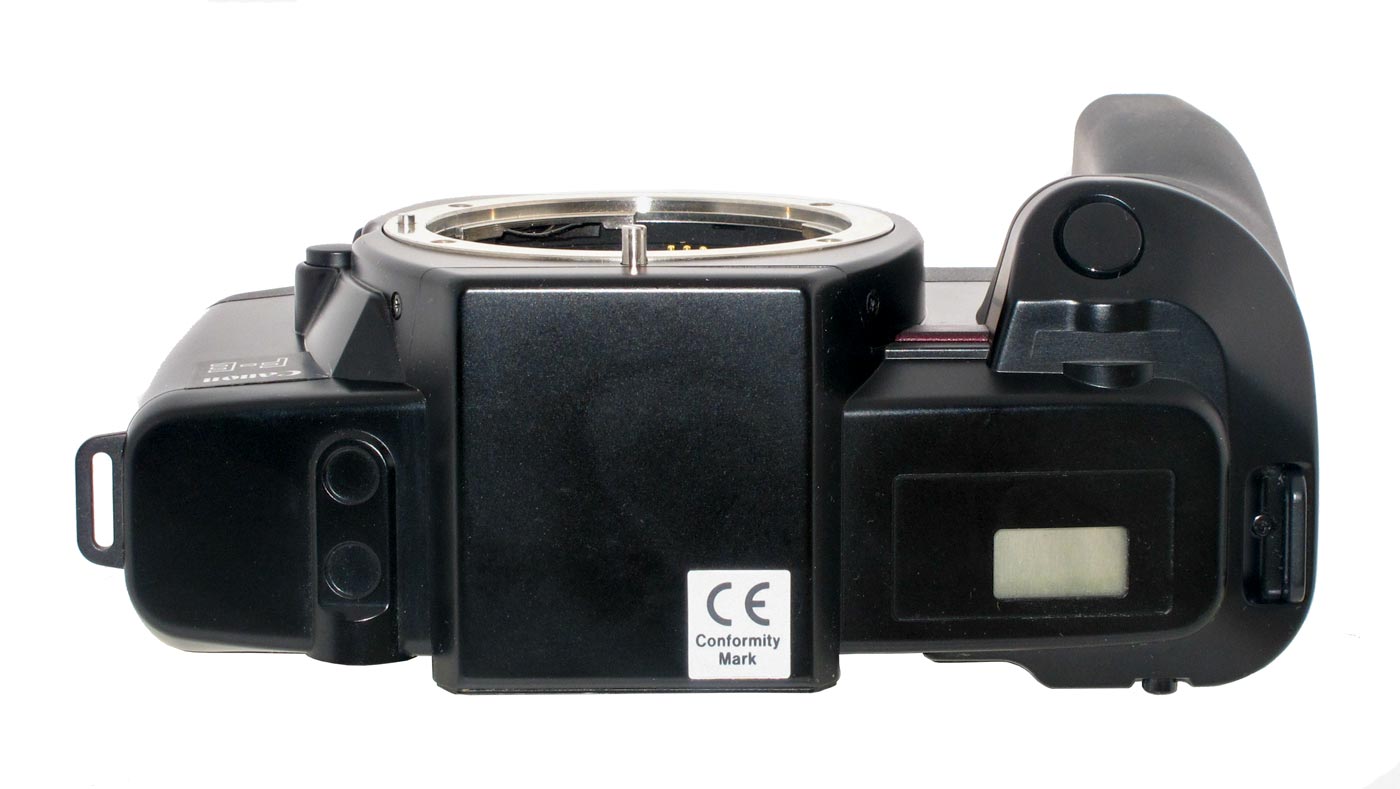 The top of the camera has none of the usual controls we expect on an SLR. The LCD screen is small and gives little information. 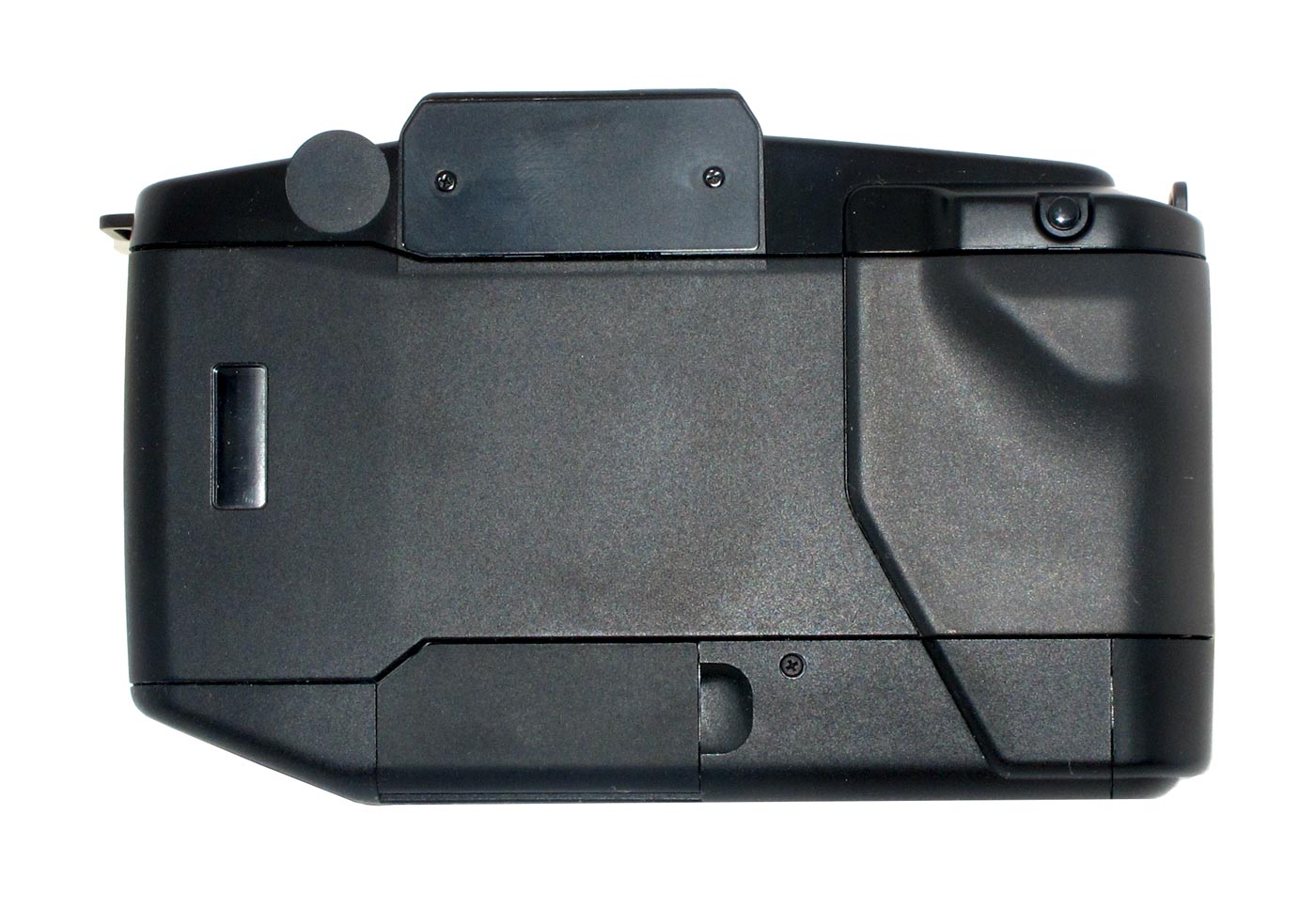 The back of the F-E lacks a view finder which makes sense as there is no mirror or prism. Otherwise the back is the same as the EOS 650 right down to the “Switch Cover”.

And now for something I know nothing about! It began about a year ago when I received and e-mail from a collector in Europe asking if I had ever come across a Canon F-E. He sent me three photos of a strange looking camera that resembled an SLR but it had no prism or means of aiming the camera. I replied that I had not and that it looked like an early EOS model and I guessed that it was from the late 1980’s. I could find nothing about it on the internet at all.

Then, this past month, I came across this same camera on E-bay offered by Pacific Rim Camera for $175.00 USD. That piqued my interest and I made an offer for it. Finding nothing on the internet to compare it with I was unable to determine a reasonable price. Assuming that Pacific Rim was in the same quandary I made a low-ball offer and they accepted it. The camera arrived about a week ago and it certainly is an interesting unit!

Long long ago, in another life, I studied physics at University. One experiment we did as students involved a double slit illuminated by a sodium vapor light source. It was almost 60 years ago so I don’t recall the details. However, for my lab report, I mounted my Minolta SR-1 on an optical bench and took an image of the interference pattern cast by the slits. I don’t even recall if I used a lens on the camera. This was my first experience with scientific imaging. 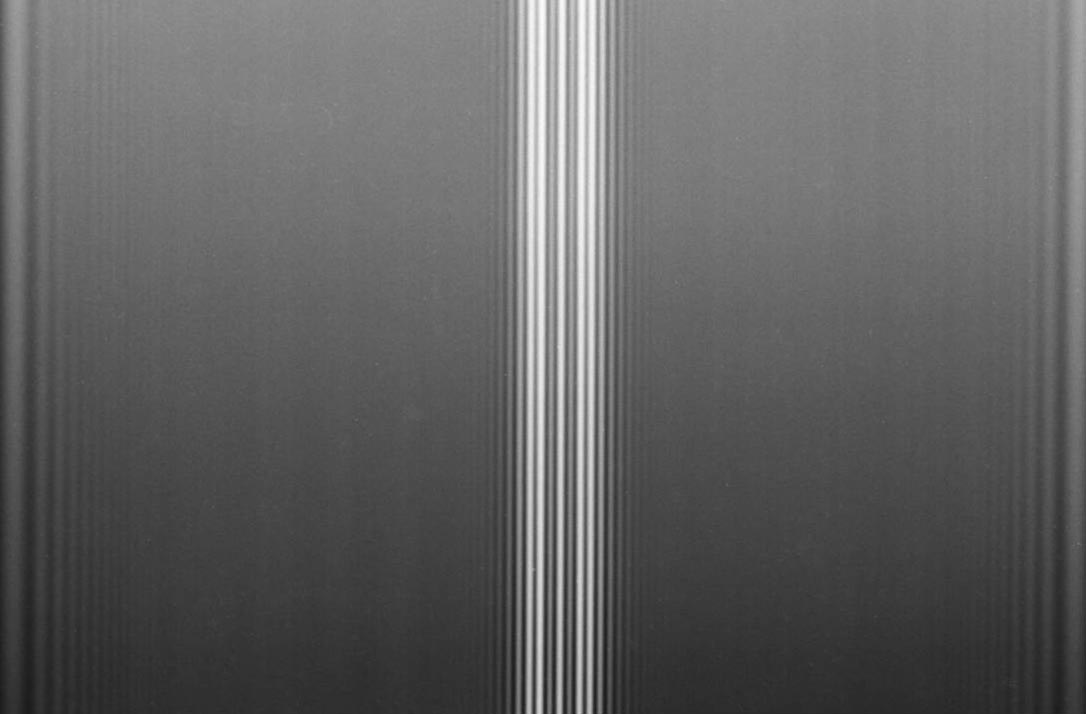 This is the image I took almost 60 years ago of a physics experiment we did during my undergrad years.

A few years later I was working in an electronics research lab and one of the instruments I was using was a Tektronix oscilliscope. It had a hood that mounted over the screen with a Polaroid film pack on it to take images of traces on the screen.

Until now those were my sole experiences with imaging that was not “photography” until this F-E came along. 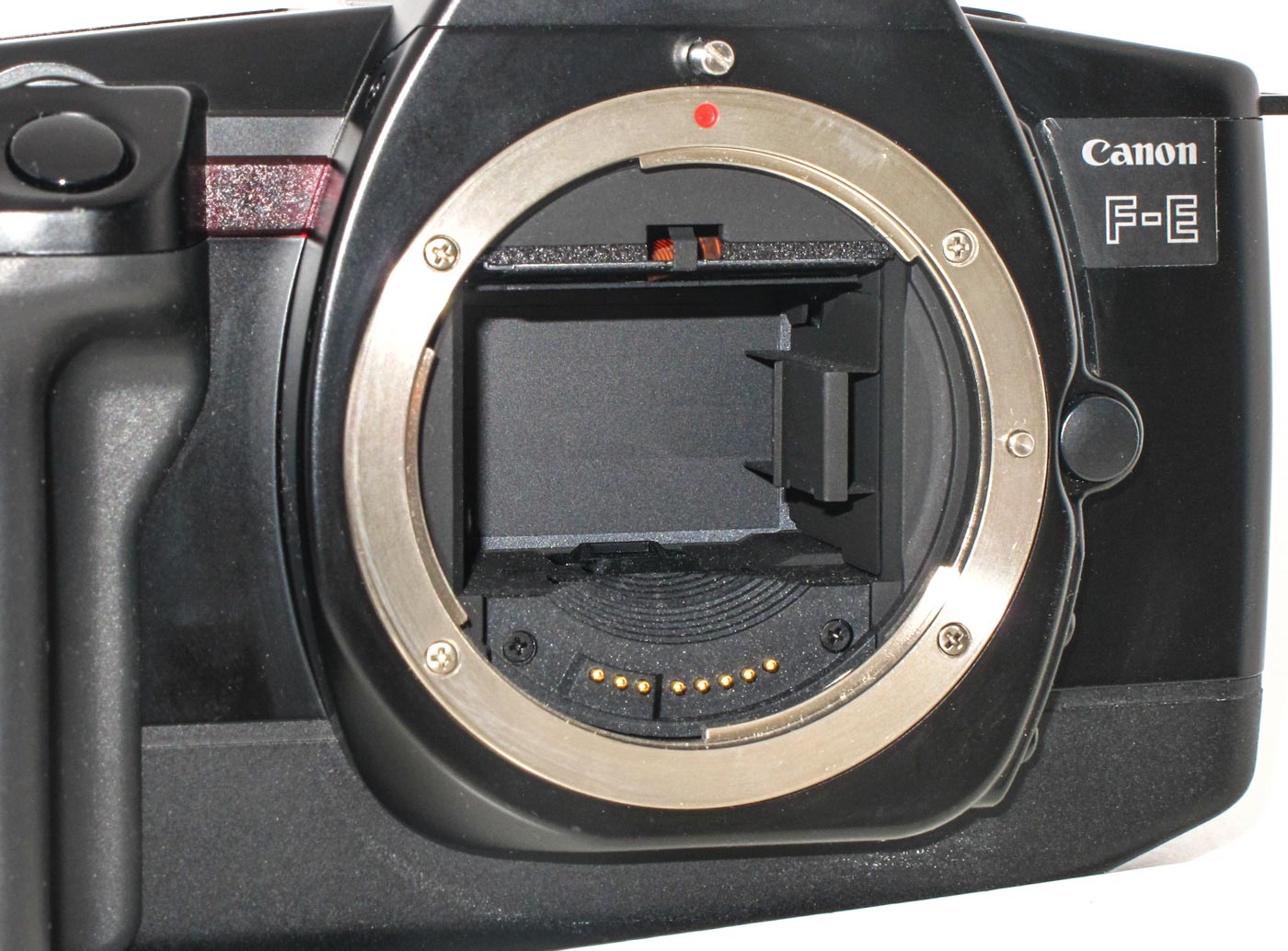 The mirror box has no mirror! The shutter is as expected for a Canon camera of this period. The electrical contact pins are correct for the EF lens mount but their function, if any, is uncertain. 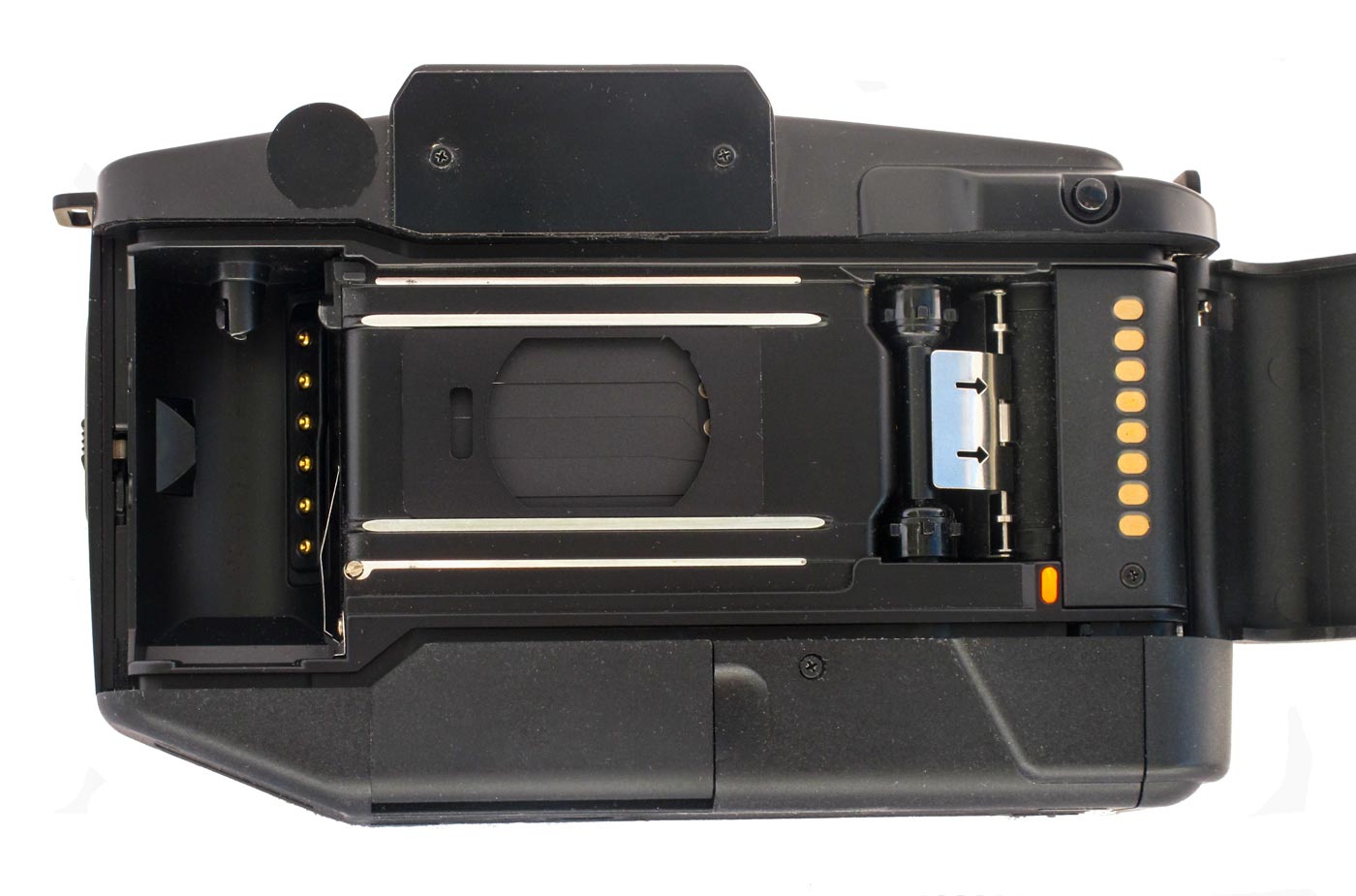 The interior is unremarkable except for the shape of the image opening. Film loads exactly the same as other Canon SLR’s of this period. The functioning of the DX Code and Data Back electrical contacts is unknown. 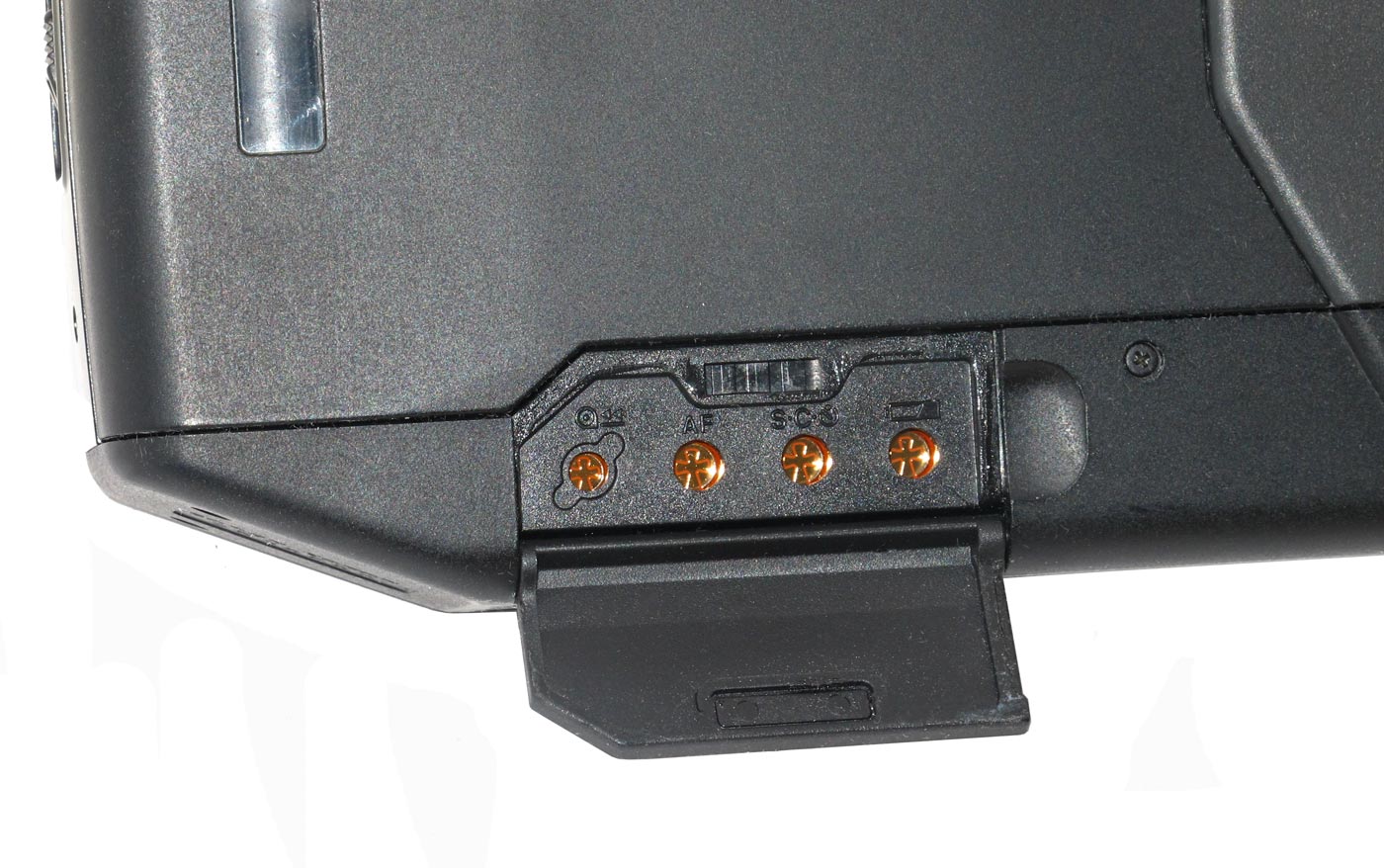 On the back to left of center there is a door Canon calls the “Switch Door” which appears to have been glued shut at one point. There were buttons here for various camera functions on the EOS 650 but they are absent here although the symbols for them are present in the plastic just as on the 650. The usual latch is magnetic and it is completely missing although the cutouts for it are there. 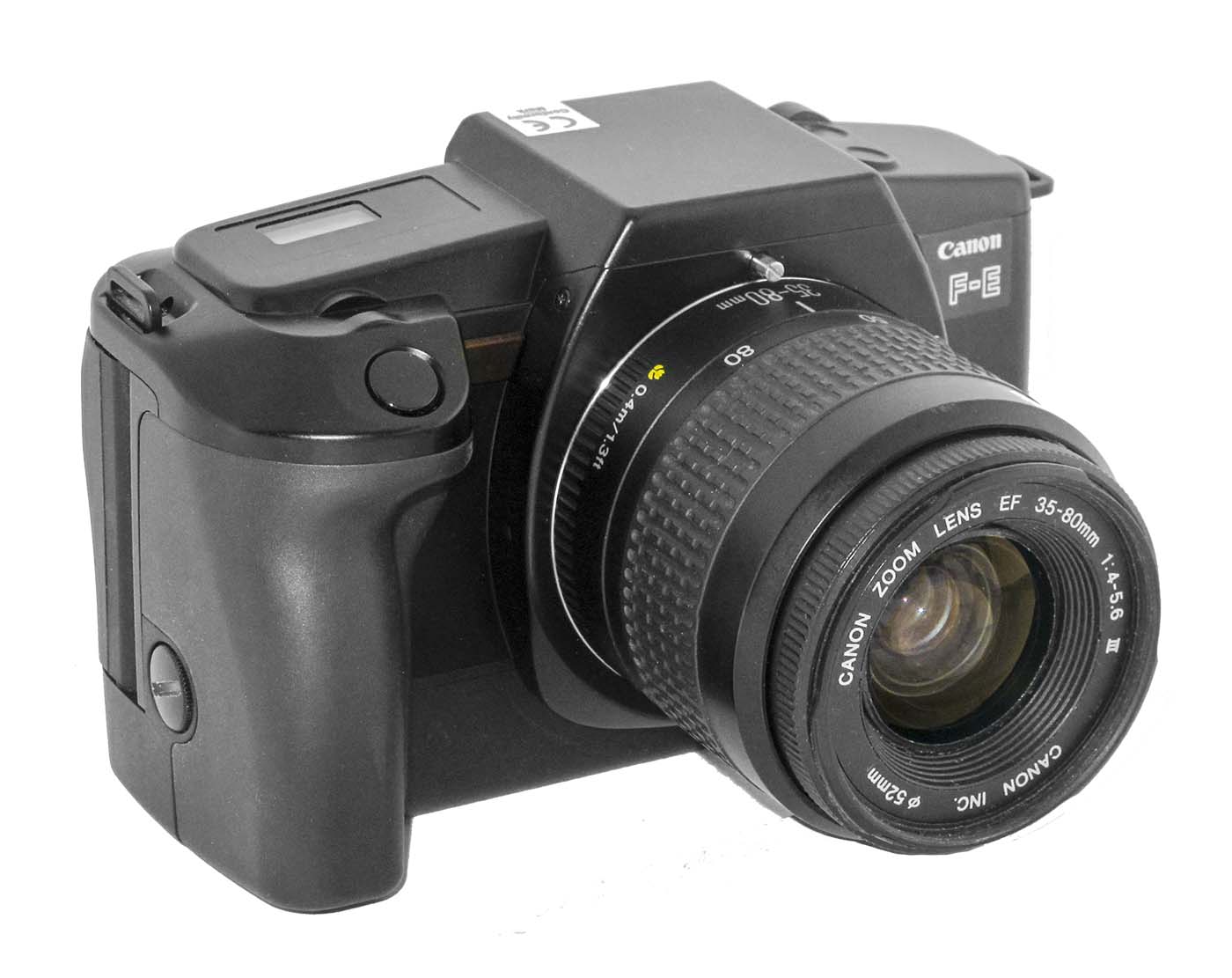 This body has an EF lens mount. Here an EOS lens has been mounted on the camera to demonstrate the mount but the camera will not communicate with the lens.

Canon was involved in X-Ray imaging almost before it began development of the first rangefinder cameras. The Canon website says that the first X-Ray camera was developed in 1940. This was a film camera that was adapted to take images of fluoroscopic screen images created by x-rays.

Dechert comments on these X-Ray cameras in his book and outlines their development into the 1950’s saying that much of their history is “mysterious”.

Canon stayed with imaging cameras and still do to this day although, with the advent of digital imaging, they have come to look less and less like cameras.

When I received the F-E I did a closer search for similar cameras and I found a couple for sale or sold on the internet.

The F-A appears to be built on a Canon AE-1.  The F-R seems to be on the body of an F-1 as does the F-Rb. But I don’t have these to compare closely, yet. All in good time! 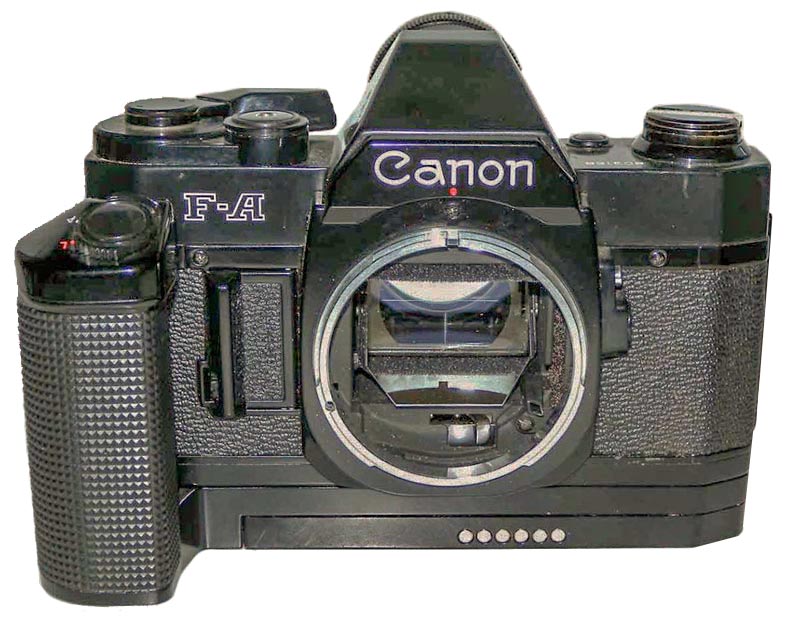 These images of the F-A, F-R and F-Rb are from auction sites I have found on the web. These cameras come up for auction now and then and they command very respectible prices for cameras that cannot be used to take normal pictures. 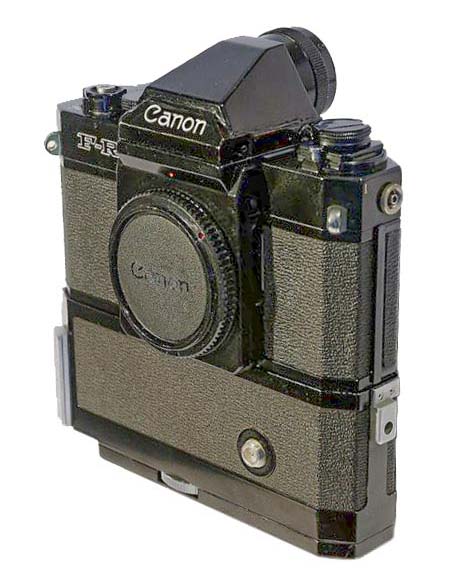 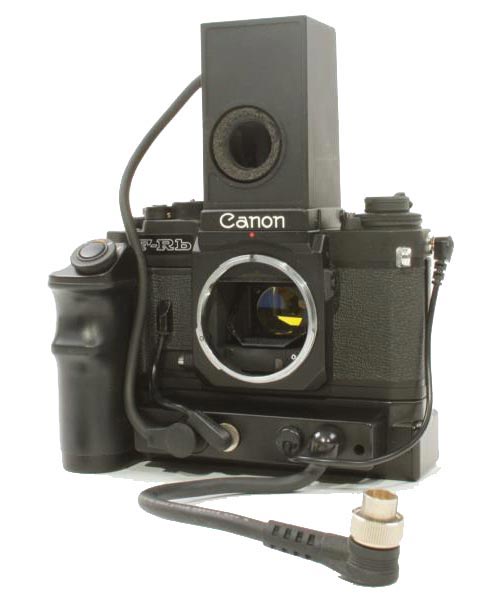 When I received the F-E the first thing I did was put a fresh 2CR5 battery in it to see if it worked. And, yes, it did …. sort of. The small LCD screen on top lit up and indicated whether there was film in the camera and what exposure number the unit was on. And it loaded film correctly, wound it and rewound it. So I believe the camera is functional. So far so good.

I next put an EOS lens on the camera and got … well, nothing. This camera will not communicate with an EOS lens. No focusing, no aperture control. And, of course, there are no controls to operate as you can see. So, this unit is obviously dependent on other equipment for its proper functioning. But I have no idea what equipment that would be.

On the top you can see the “CE” sticker. This is a certification symbol indicating that the camera passes the health, safety, and environmental protection standards for products to be sold within the European Union. That does not mean that the camera was used in Europe but it was certified as being in compliance with their rules. 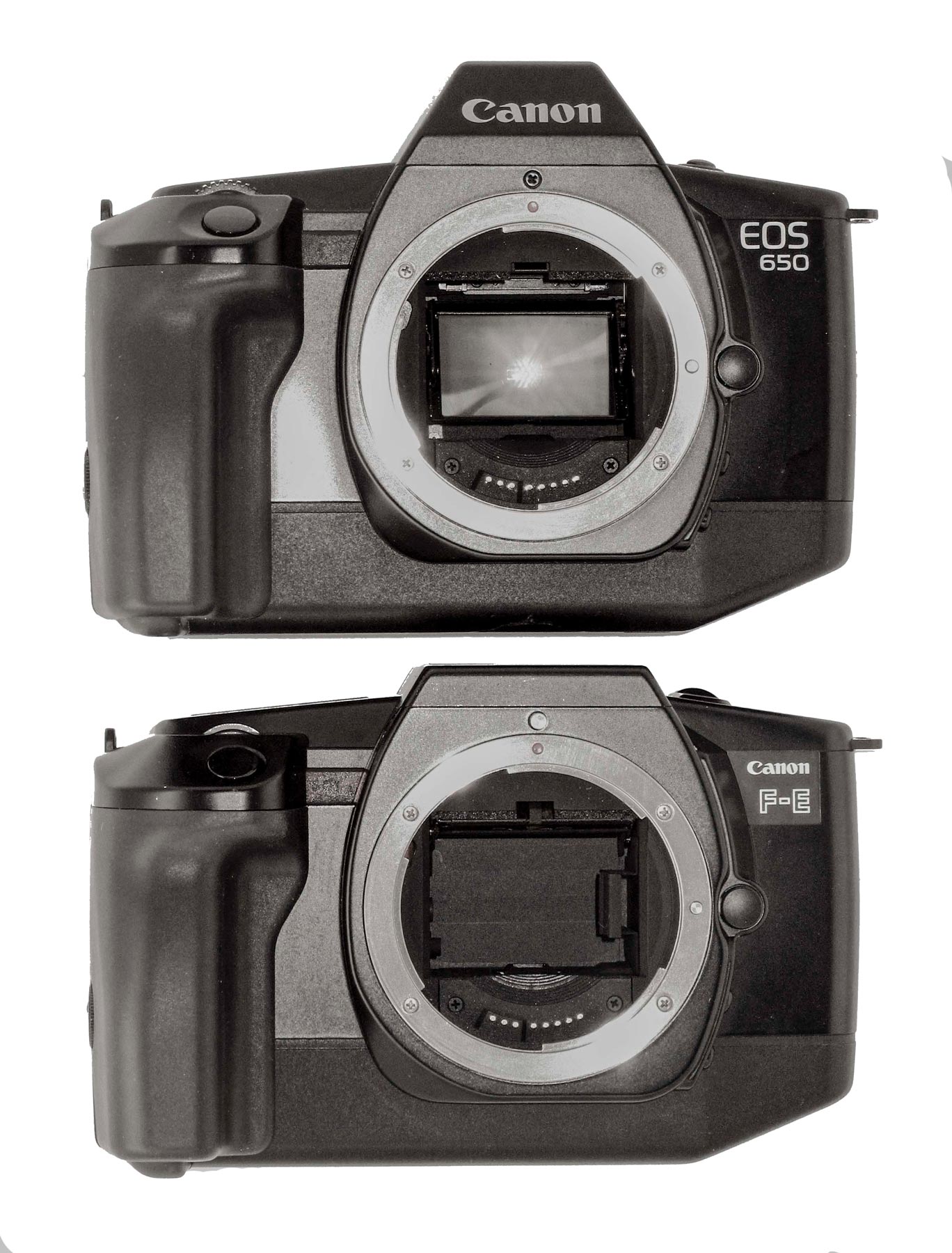 When you compare the F-E with a Canon 650 from March of 1987 the similarity is obvious. 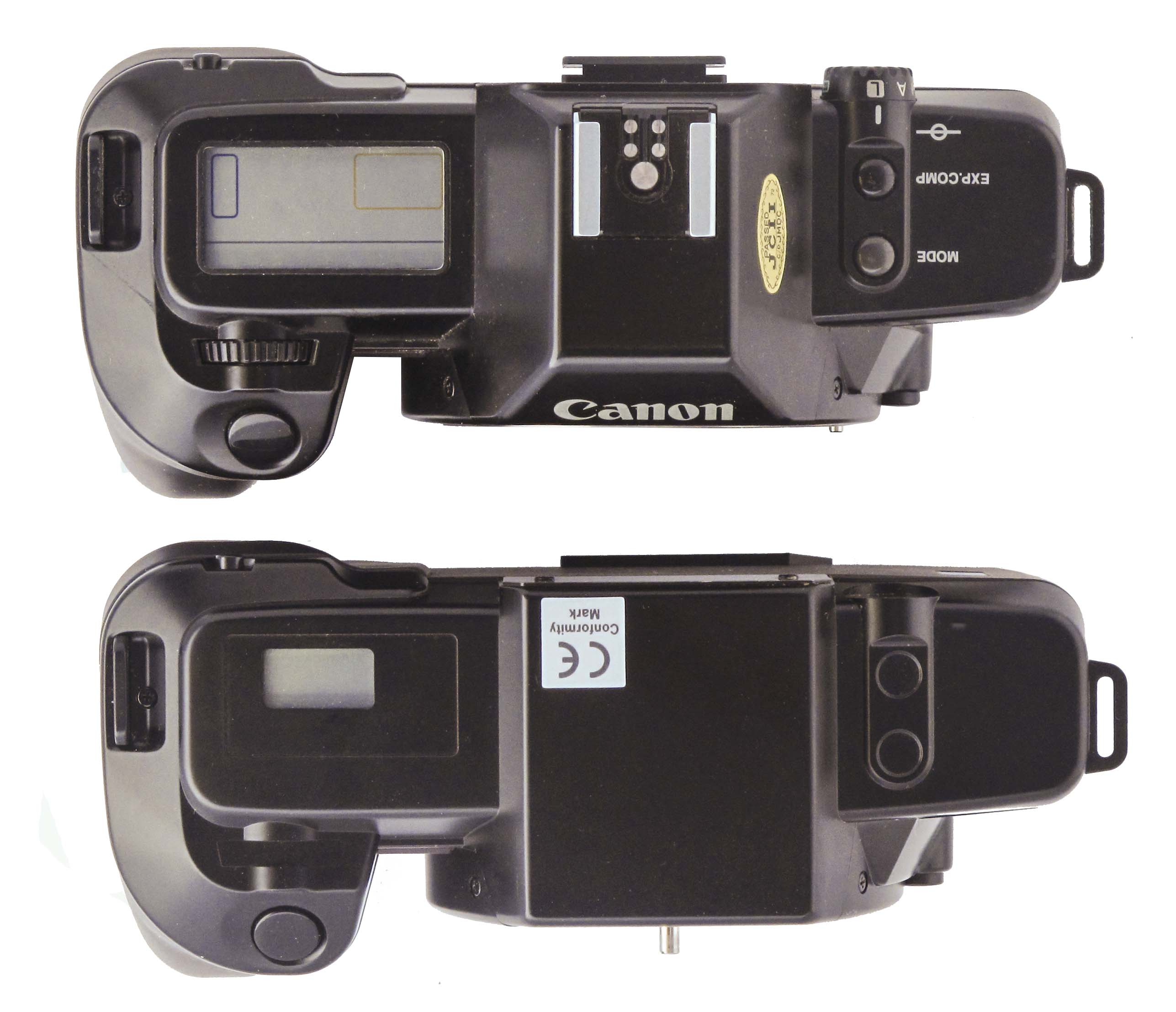 Although the tops are very different the layout is the same. There are none of the usual controls but the spaces and structures are all there for them. 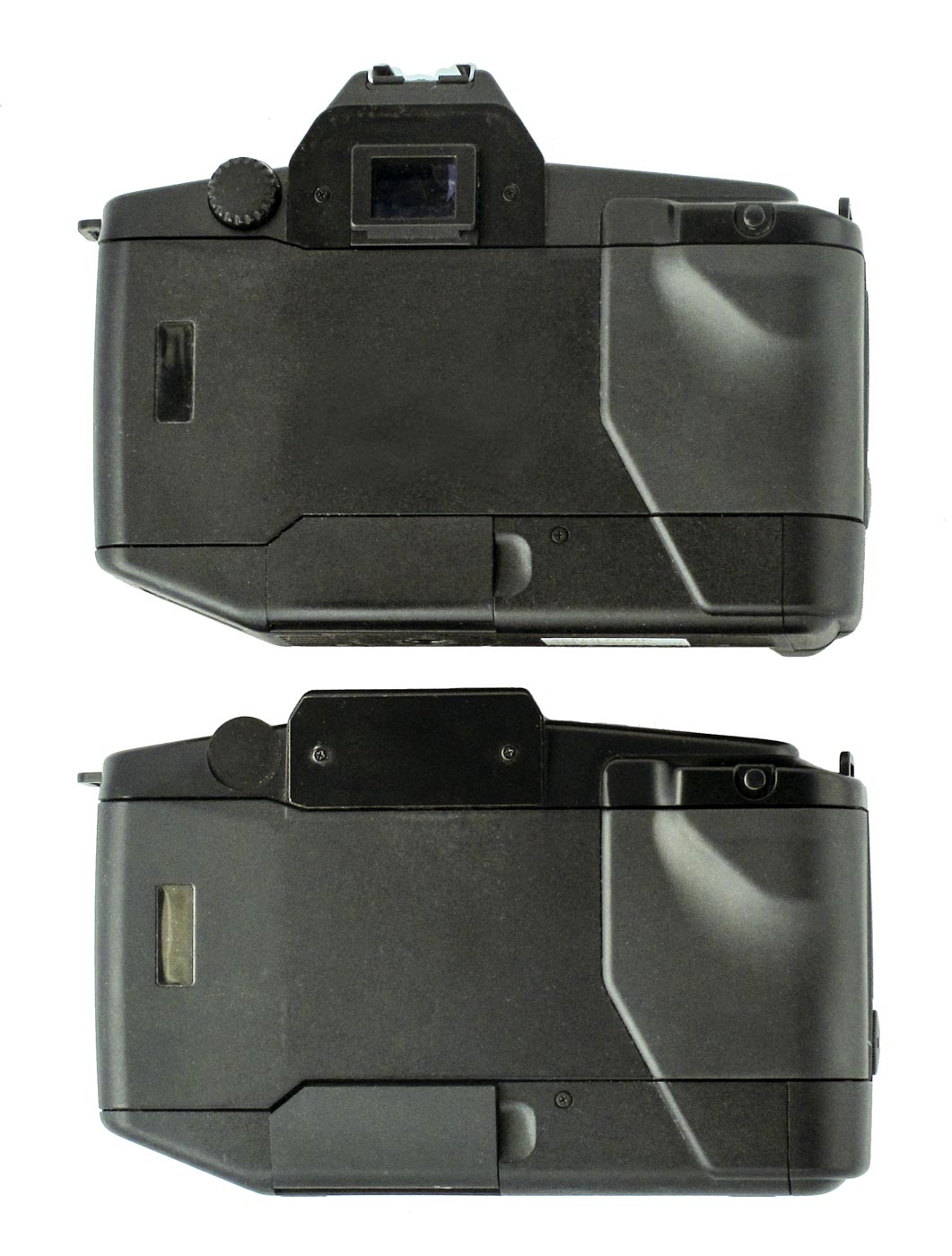 The backs appear almost identical except for the lack of a view finder. 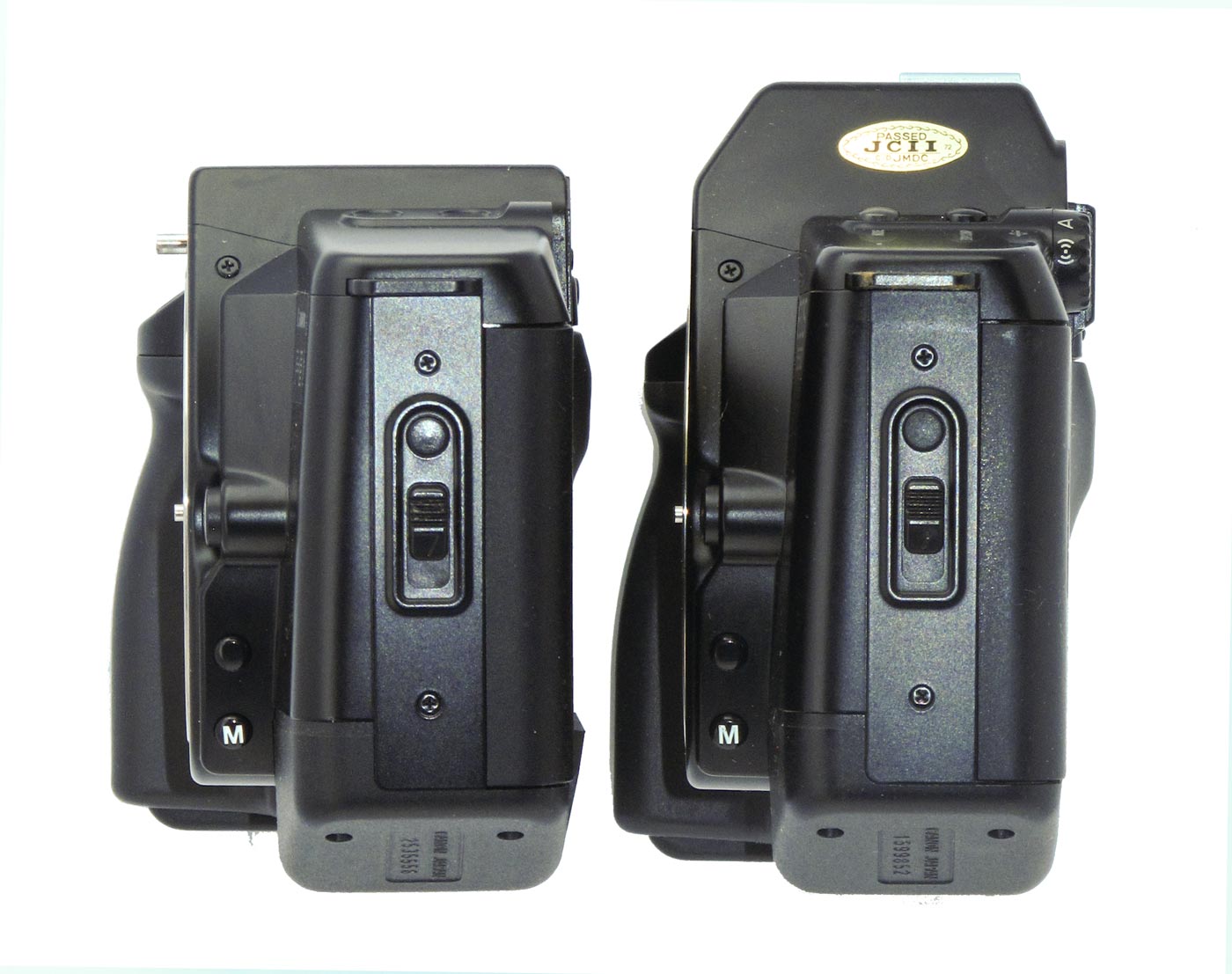 The left side back release buttons are the same. But the lack of a penta prism is obvious. 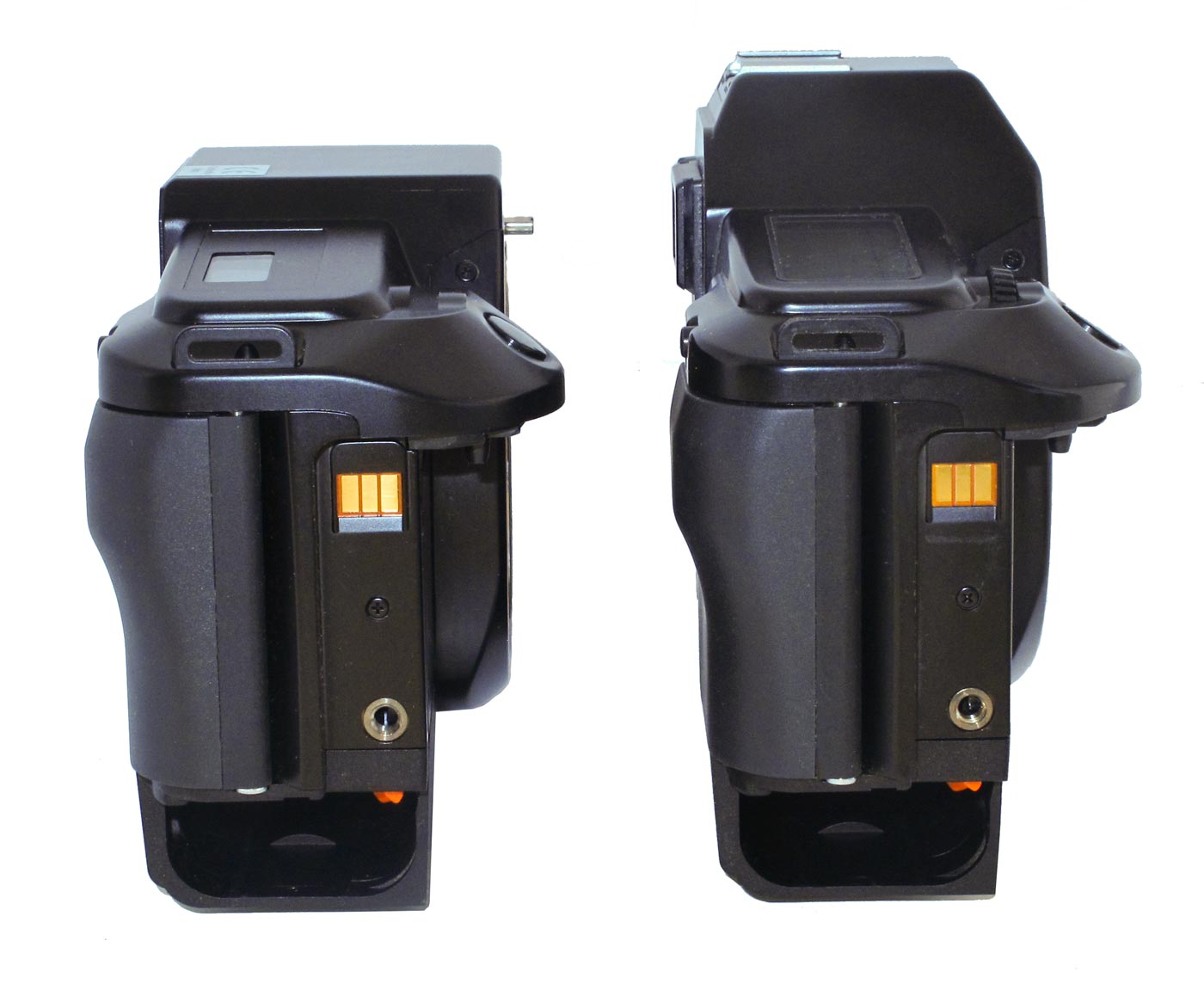 The right side with the battery compartments open shows the exact same structure. 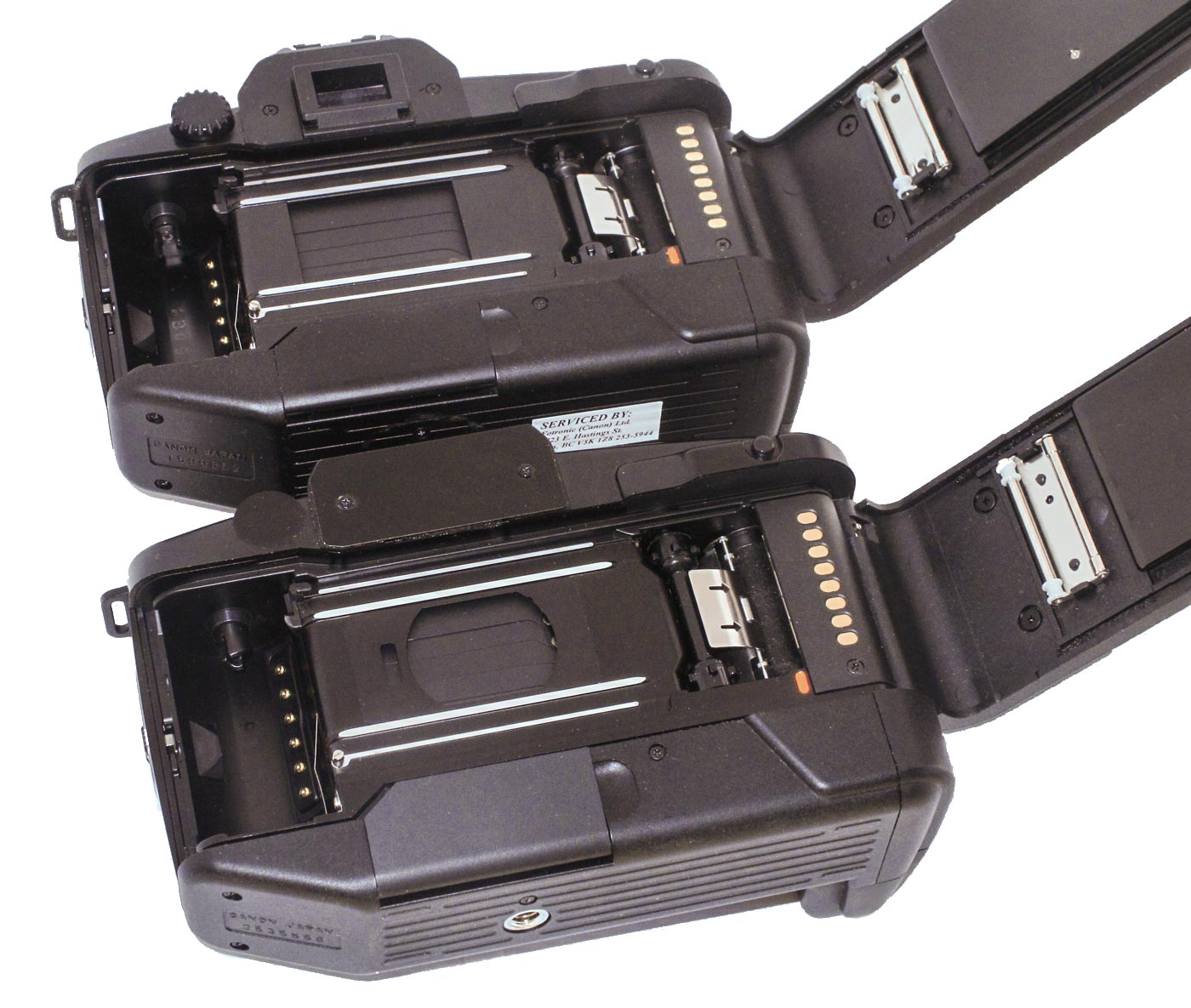 From the pictures above you can see that this camera is based on the EOS 650 which was the first camera to use the EF lens mount. The body of the 650 is clearly discernible in the body of the the F-E. If other cameras of this type come my way at reasonable prices I will acquire them and write them up here. And as I learn more about them I will update this post.

So that is my Canon F-E and now you know as much as I do about it. It has a place in my collection. Although it appears to be working it is not a “shooter” as most of my cameras are. But I like it.