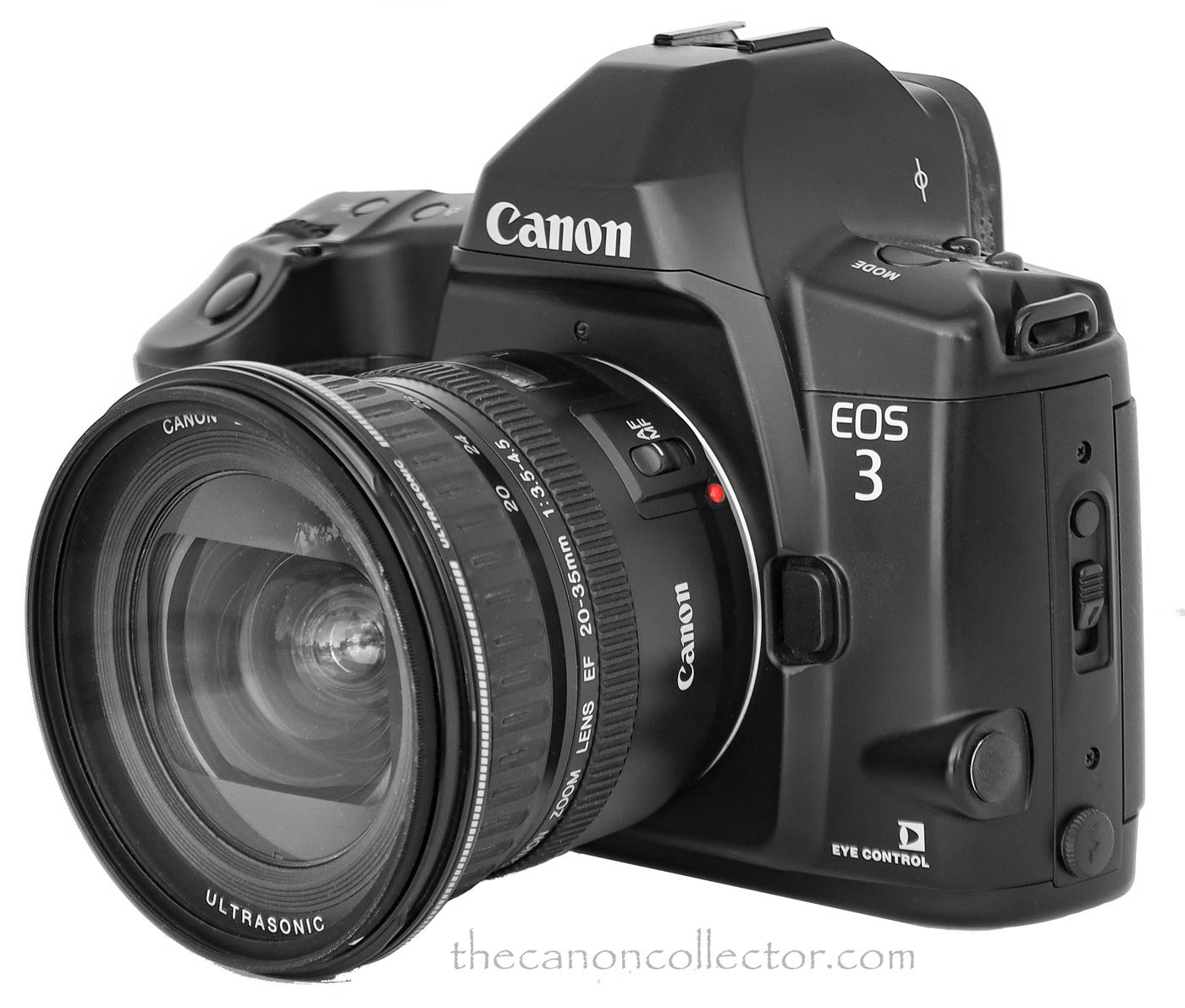 My EOS 3 is a sweet film camera. It’s heavy and solid but it has the quality Canon has become known for. It is a film camera but shooting with it is as smooth as digital in every respect.

EOS, as we all know, was one of the Titans and was the goddess of the dawn. Her brother was Helios, god of the sun, and her sister was Selene, goddess of the moon. She is mentioned several times in the Iliad and appears in ancient Greek art.

Canon seems to be drawn to classical gods and goddesses. The very name Canon derives from Kwan’on, an east Asian deity of mercy and compassion. The first Canon camera produced in 1934 was called the Kwanon.

But back to cameras. Canon’s first autofocus camera was the T80 brought out in 1985. Three special autofocus

lenses were produced for this camera: the AC 50mm f/1.8, AC 35-70mm f/3.5-4.5 and the AC 75-200mm f/4.5. Canon thought carefully about the functions of the various components and decided that the motor(s) driving these lens were to be in the lenses. Motors at that time were not small and the lenses themselves are distorted by the space reqirements of the motors. The AF feature of these lenses would not work on any other camera although they could be used as FD manual focus lenses.

To create the autofocus single lens reflex it was obvious there was going to have to be more communication between camera and lens. The venerable FD mount was not able to accomodate the additional requirements. The T80 system worked but it was a hybrid mechanical electrical system. Canson’s vision was to eliminate the mechanical linkages altogether. This created a more robust and functional partnership between camera body and lens. It was time for a new lens mount and the lenses and camera bodies to go with it. The EOS System (EOS is short for Electro-Optical System) was the result. 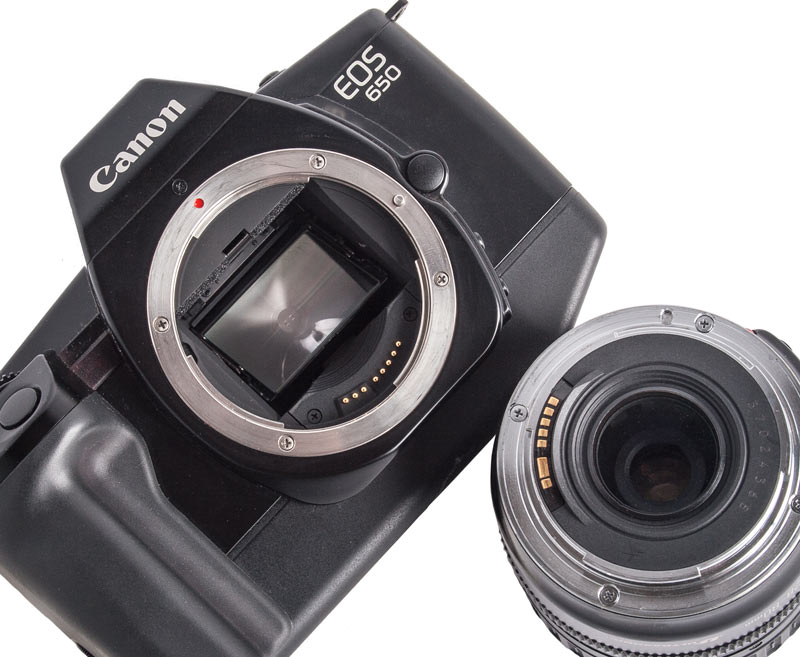 The EF  (Electro Focus) lens mount made its appearance on the first EOS camera, the EOS 650. Mechanically the mount is a bayonet style but all communications between lens and camera are electronic.

The first EOS camera was the EOS 650 introduced in March of 1987. It was all electric. Look at the camera body and lens.  No levers, no pins, just a series of electrical contacts. This was a liberating concept. For instance, lens aperture became irrelevant to exposure. Think about the zoom lenses that say “f/4 – 5.6”. Their aperture changes with the extent of the zoom, but the camera can adjust, quickly, invisibly, instantly.

Essentially the lens is just a collection of motors and pieces of glass. It contains no computing ability. It is the camera body that takes control. By doing this all of the EF lenses will work on all of the EOS bodies, automatically.

At the time it was introduced the EF mount had the largest internal diameter (54mm) of all mounts on SLR cameras. It had a Flange Distance of 44.0 millimeters as opposed to 42.0 millimeters on the FD mount. As a result the earlier FD system is not compatible with the EF mount. Adapters with focus to infinity are impossible without added lenses which inevitably reduce image quality.

We should define a few terms regarding Autofocus so that the descriptions of various cameras makes sense. There are twi types of focus sytems: Passive and Active.

Active Auto Focus relies on some means of measuring the distance to the subject. The usual ways are by emitting infrared light or high frequency sound waves and measuring their reflection from the subject. These methods do not rely on light coming through the lens and they are generally not good at selecting particular objects to focus on. 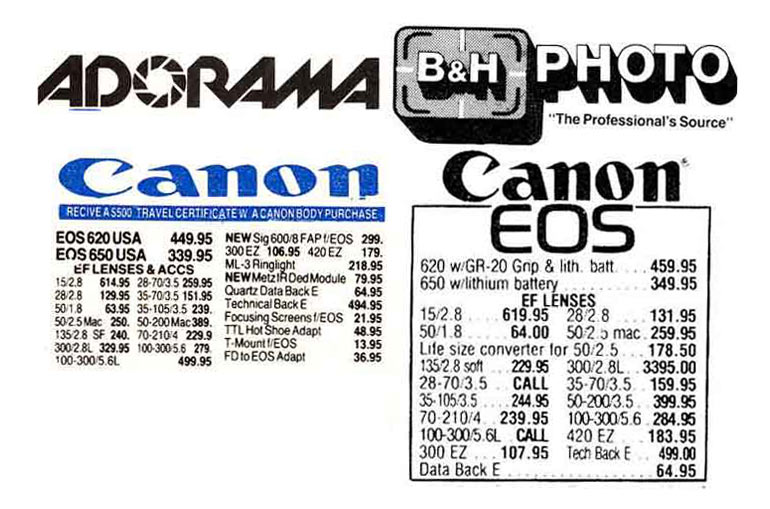 The Passive method determines focus by analyzing the light coming from the subject to the camera through the lens. These methods are generally more accurate in terms of distance and the ability to pick out particular objects to focus on.

Phase detection is a complex system but it is exact and rapid. Basically it relies on the fact that two samples of the light coming through the lens, from different parts of the light stream, will focus at different positions depending on how out of focus the object is. As system comes closer to focus the two samples converge and become one.

Contrast Detection on the other hand is a simpler system but it is slower to react. It relies on the fact that the boundary between light and dark parts of the image will become narrower the closer the system is to focus. In other words the contrast increases as focus is approached.

We tend to forget that the EOS system was developed for film cameras and the modern form of the digital camera was fully realized in the EOS A2 and EOS 1 V, cameras that used film. Using one of these cameras is a delight and any confirmed digital SLR user will feel right at home.