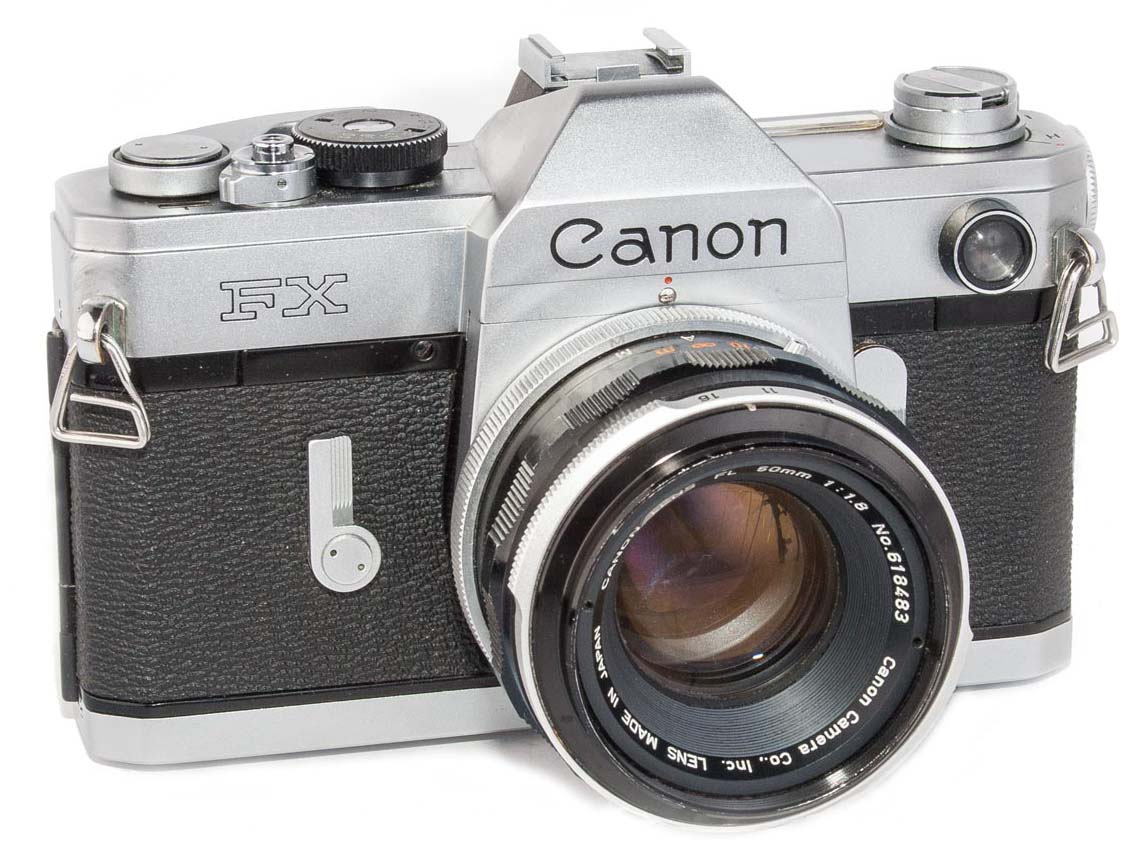 The Canon FX was the first camera in the F Series of Canon cameras and the beginning of Canon’s march to dominance in the camera industry.

When Canon came out with the Canonflex
in May of 1959 the Pentax SLR had already
been on the market for 2 years. It was a confusing
time and no one knew if the SLR would make
serious inroads into the camera market. That is
hard to imagine now.

Canon put a great deal of effort into the
development of the Canonflex which they
brought out in 1959. Unfortunately, the camera
and its marketing had several deficiencies which resulted in very poor sales. At the same time, almost to the day, Nikon introduced the F-1 which was a far superior camera and it established Nikon as a power in the camera market for a decade.

In view of the poor showing by the Canonflex, Canon

rethought its single lens reflex design and in 1965 brought out the Canon FX, this first of the F series. With the FX Canon began a series of cameras that were eventually to recoup the loses of the Canonflex era. Names like F-1, AE-1, EOS 1 and a host of solid practical cameras made Canon the preeminent camera maker it is today. And it began with the Canon FX.

With the new “F” series came a new lens mount. The “R” mount of the “Flex” series gave way to the “FL” mount which was used on the FX, FP, Pellix, FTQL, PellixQL, and TL models.

In March of 1971 Canon came out with its flagship SLR, the F-1 and again the lens mount changed. The new mount was called the FD lens mount and it had sufficient communivcation between camera and body to allow for complete TTL metering.

All subsequent F series cameras used this new mount. The last camera of the F series was the New F-1 which came out in September 1981, unless one wanted to count the very specialized New F-1 High Speed Motor Drive Camera which was introduced in February of 1984.

1964 to 1984 was twenty years of development and innovation of the Canon camera which eventually led to the “A” series, the “T” series and finally the EOS cameras that are with us today. But it really all started with the Canon FX of the “F” series in 1964.

This is a selection of F Series cameras in The Collection. From the left in the front row are an FTb, FT, TX, and another FT. Behind is a black EF (I have only seen black ones), a Pellix in the back, then a TLb and an FX (both hard to identify in this image) and finally a New F-1 and an F-1n. 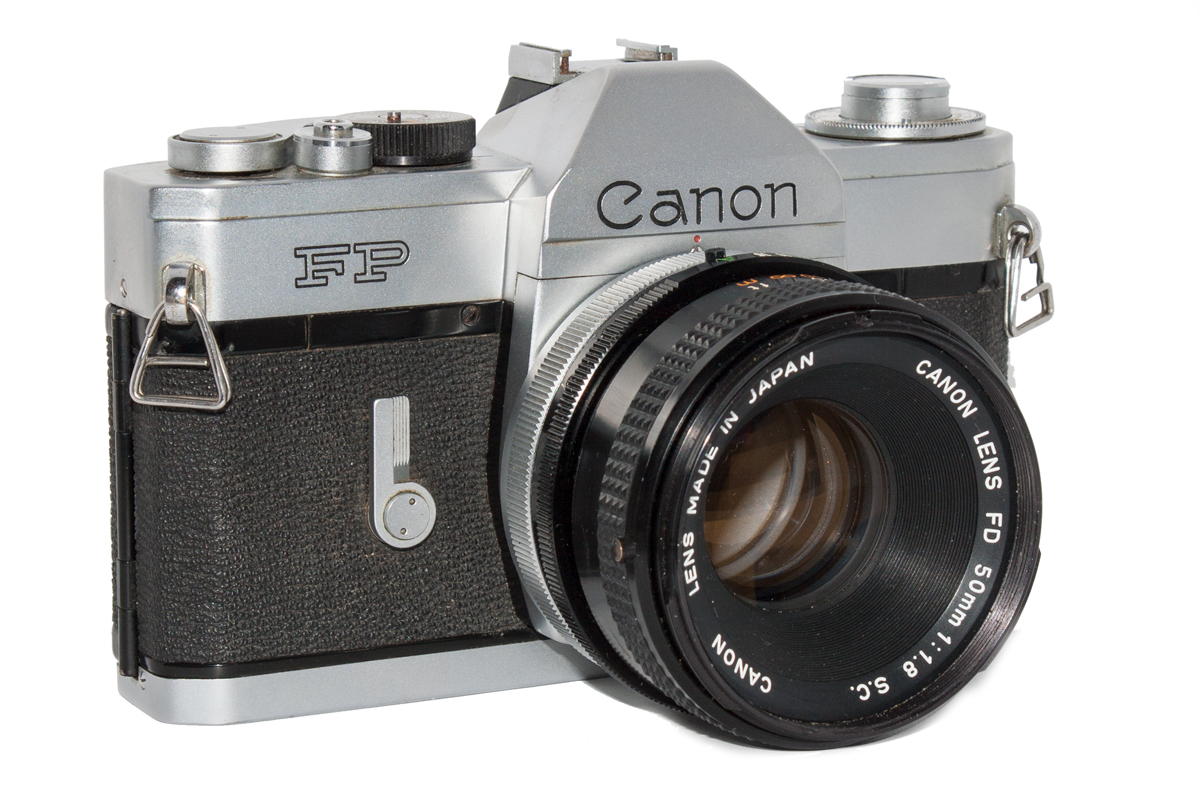 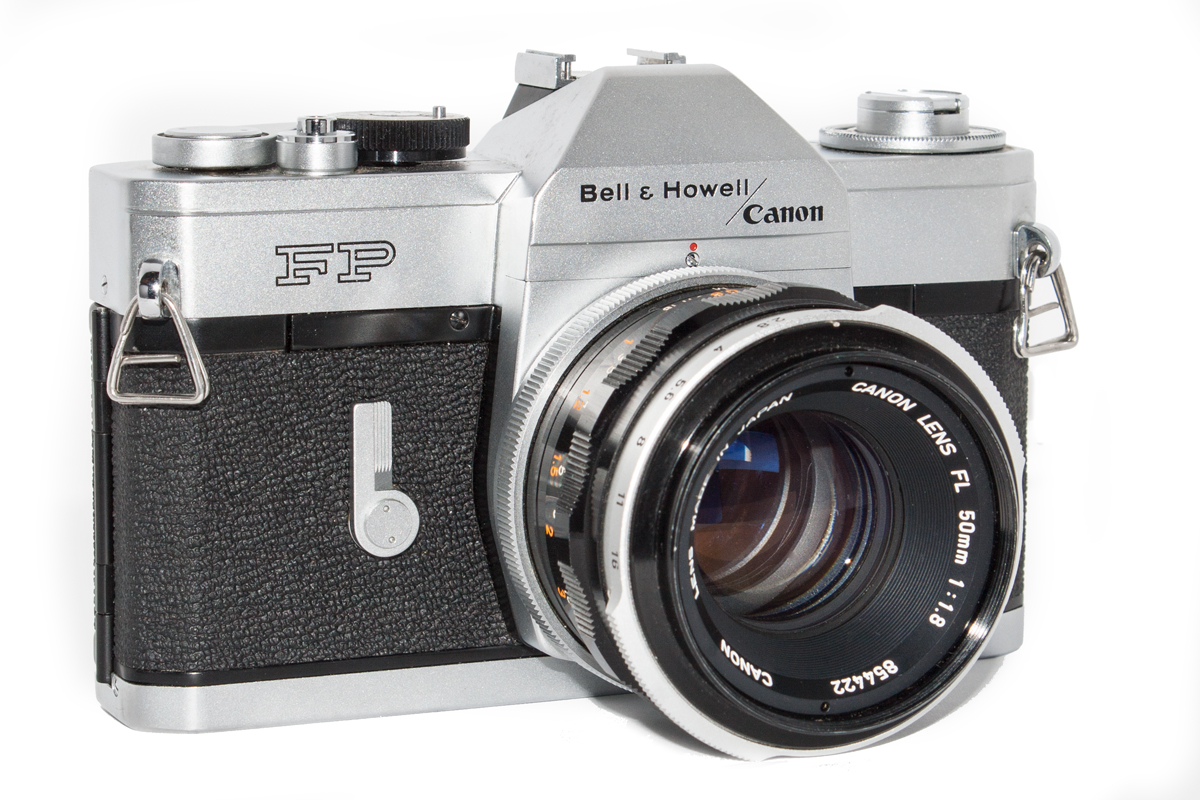 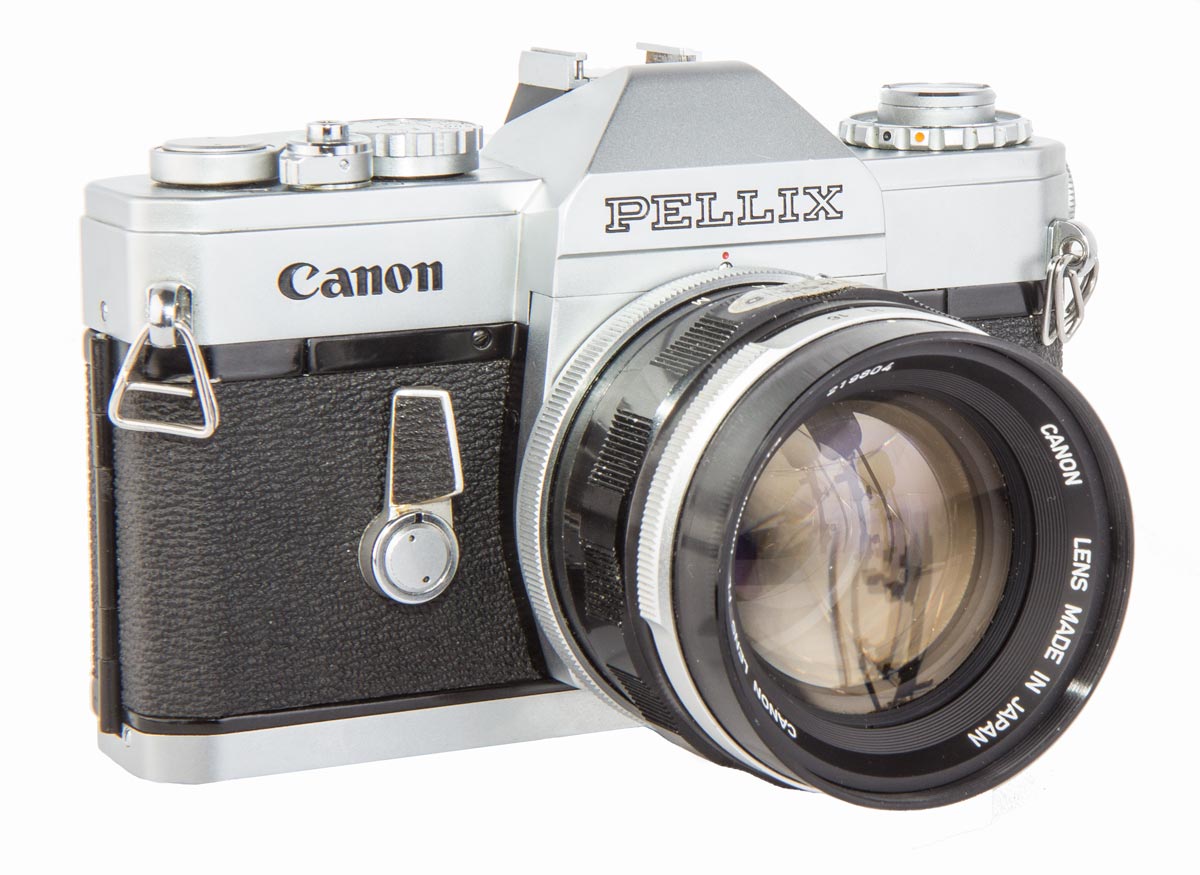 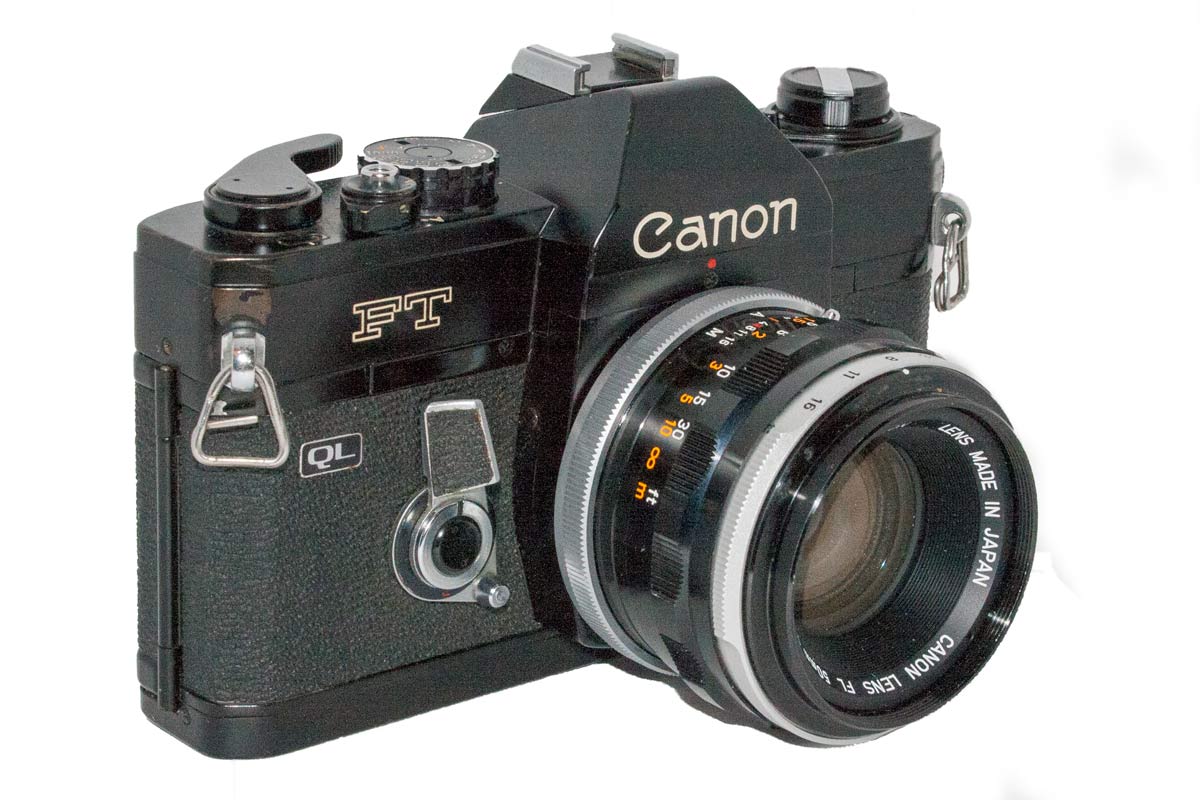 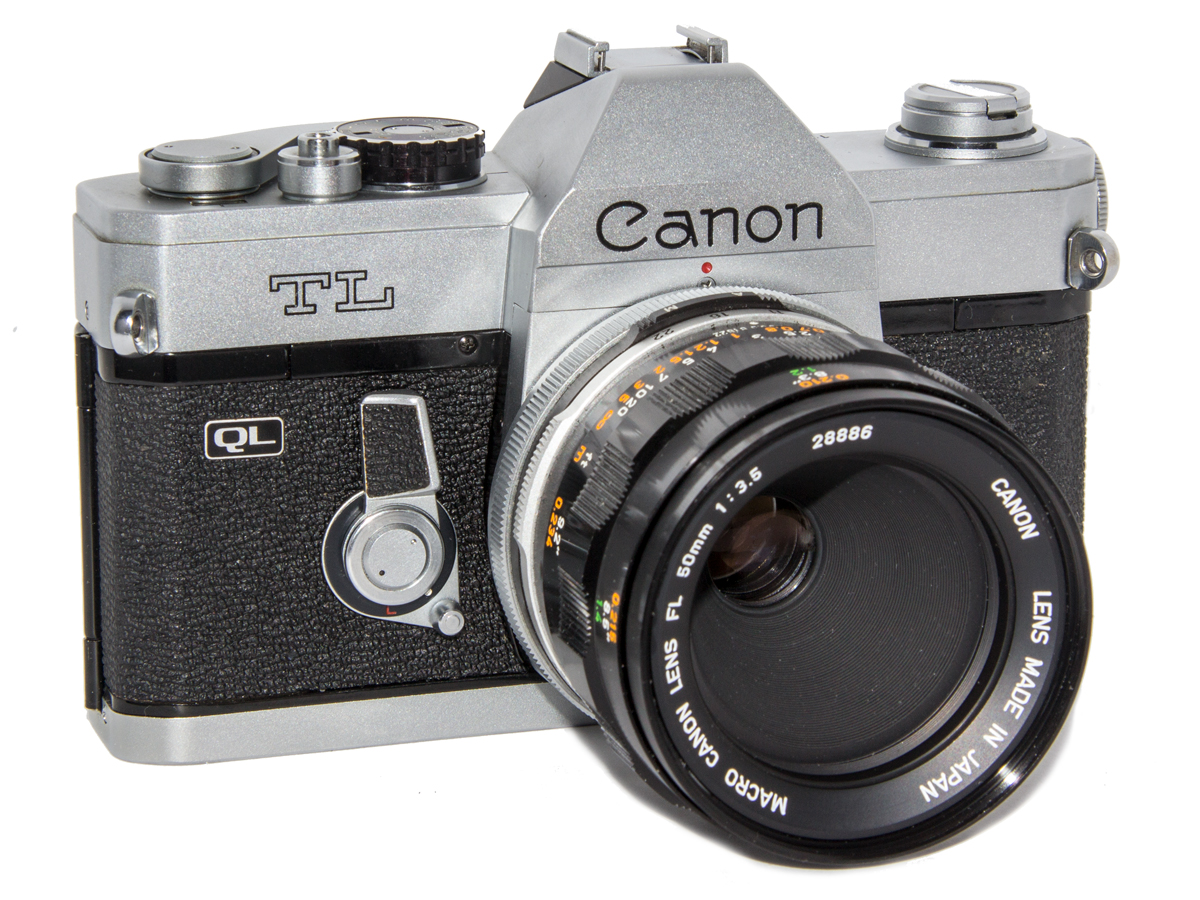 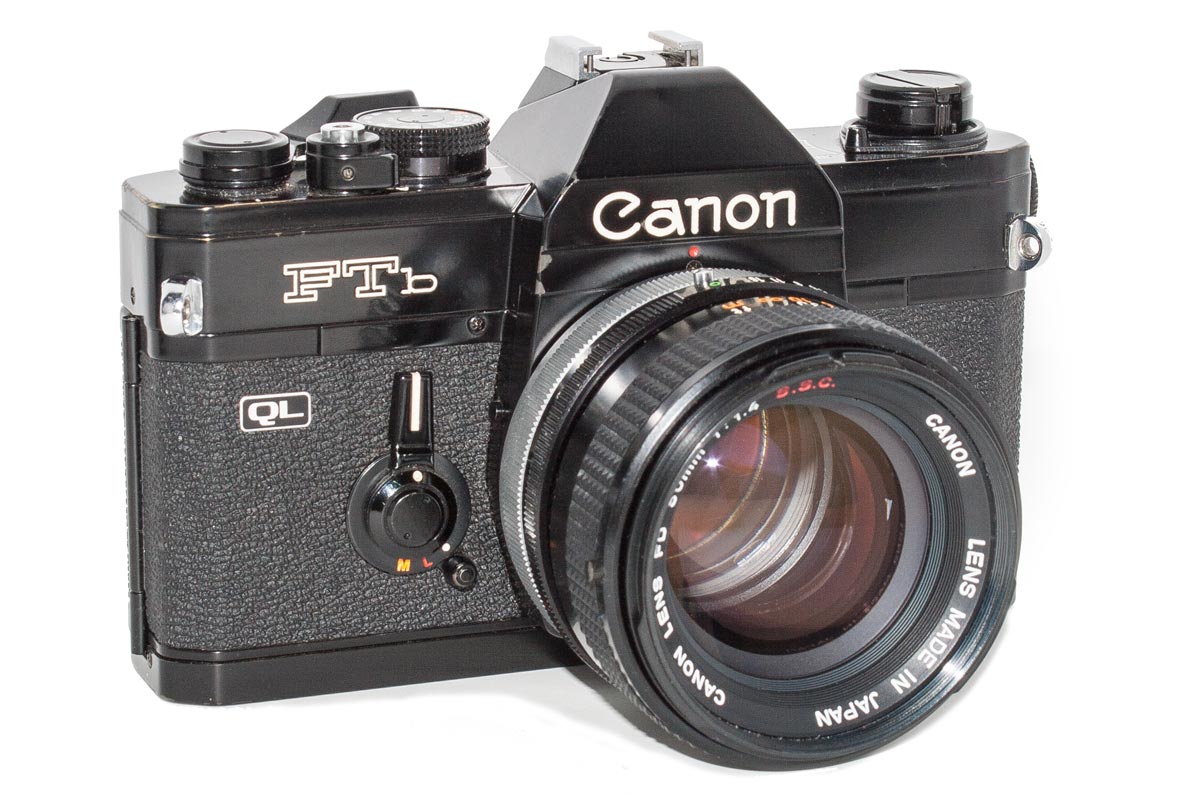 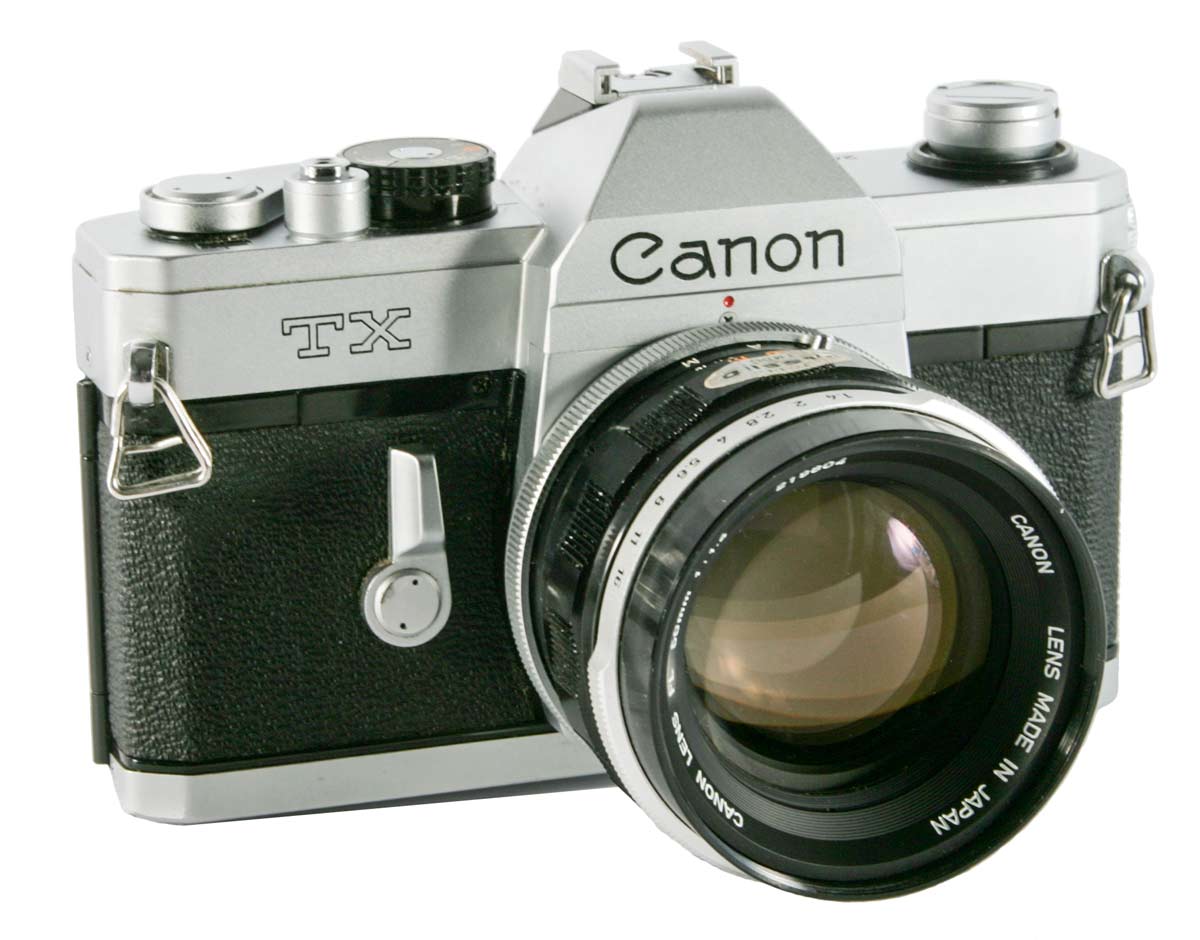 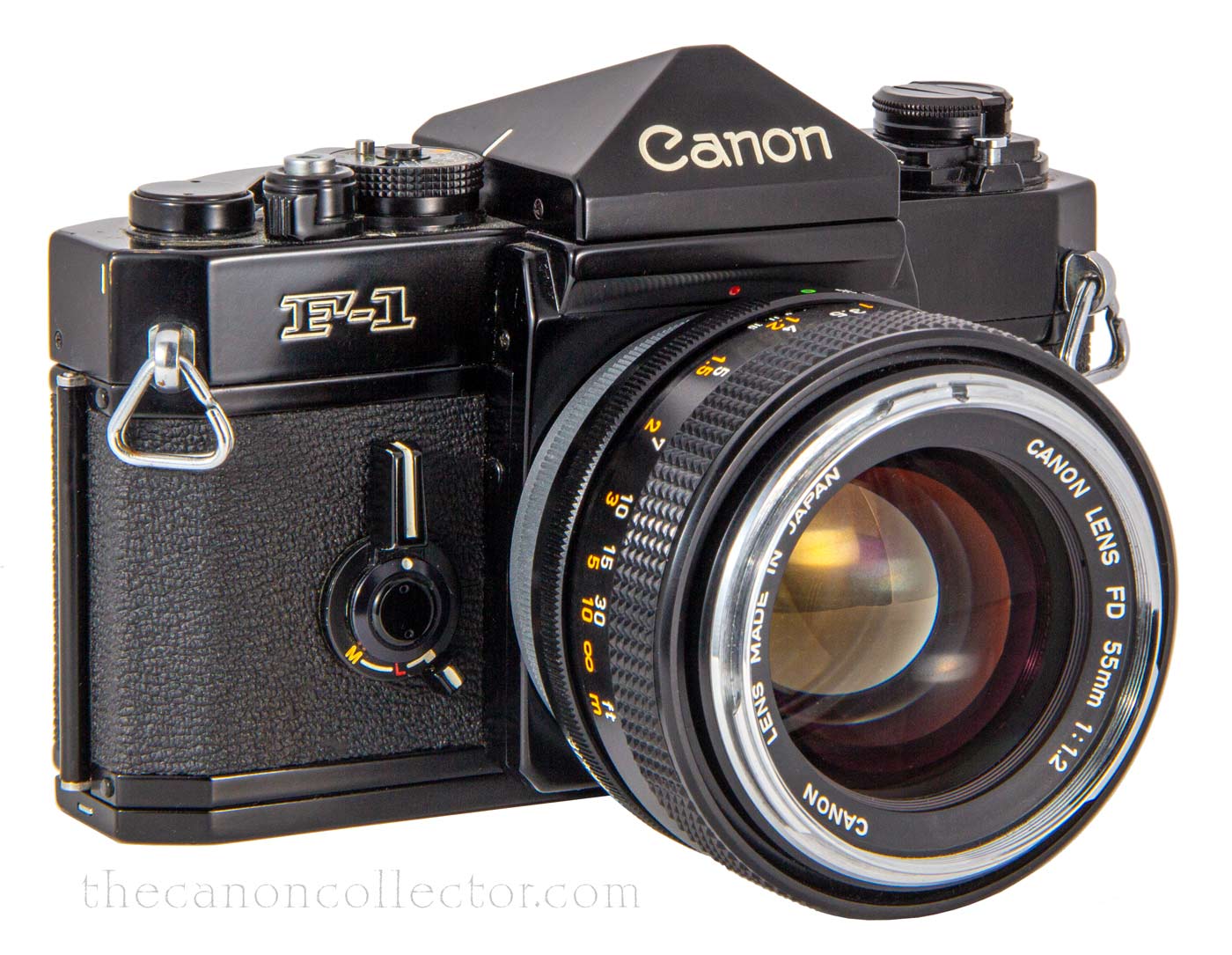 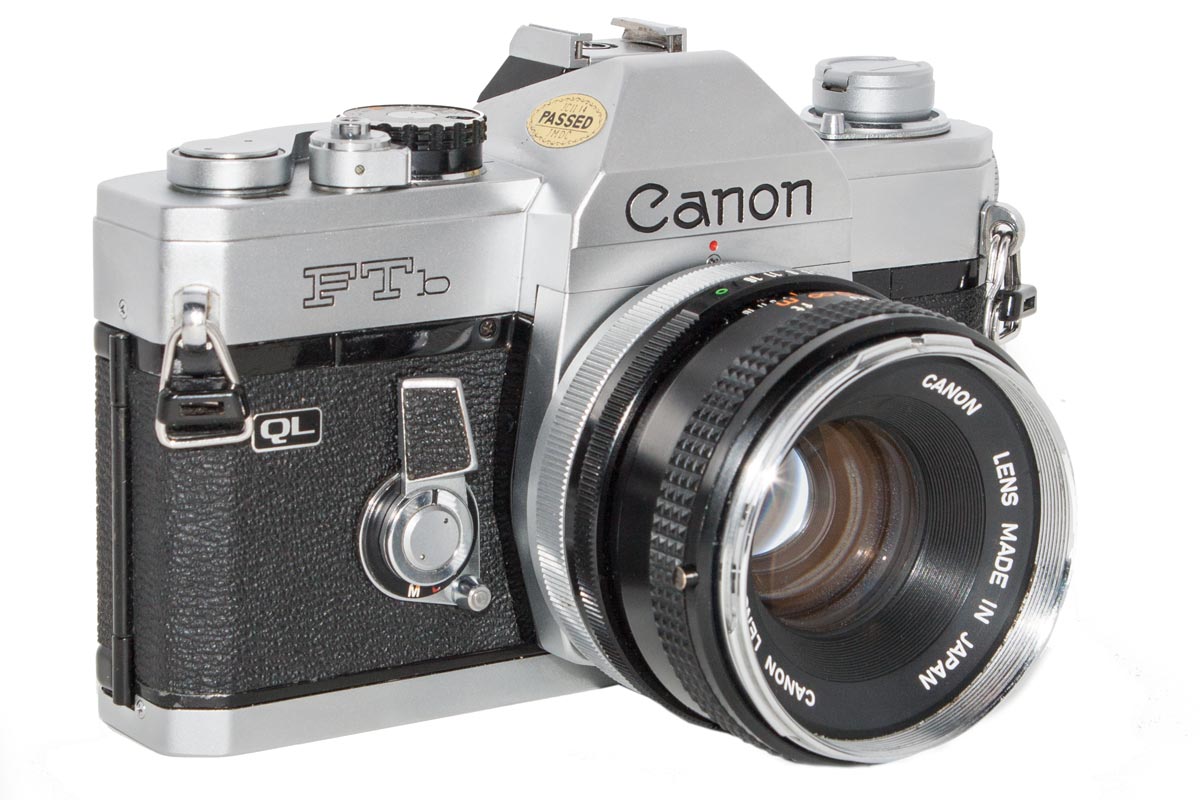 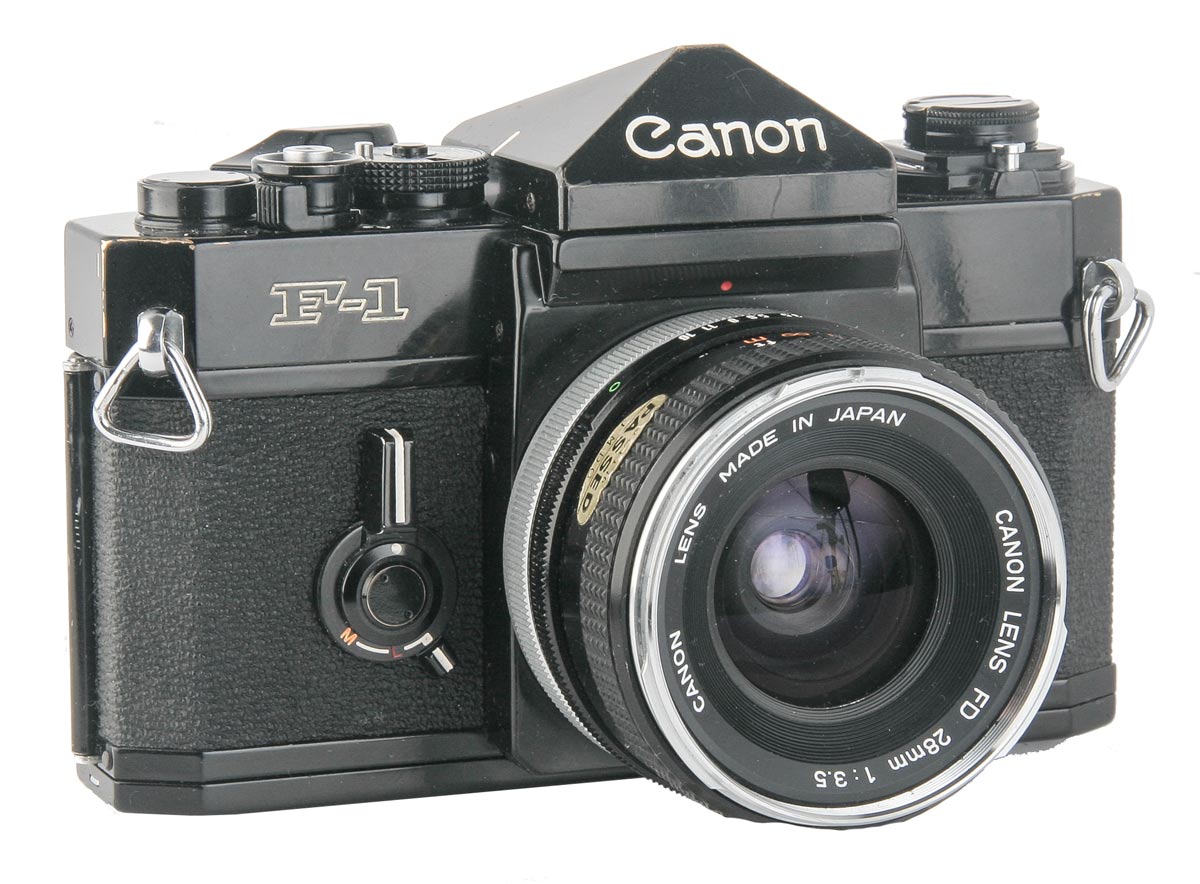 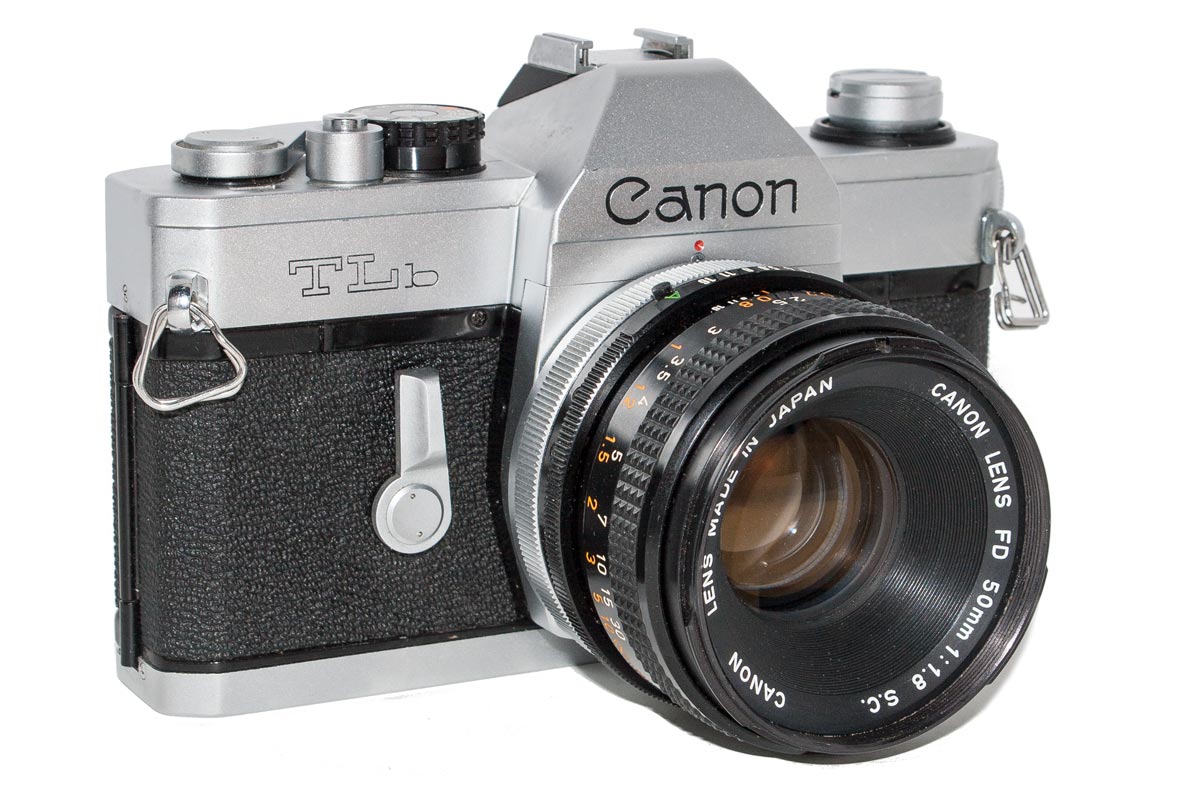