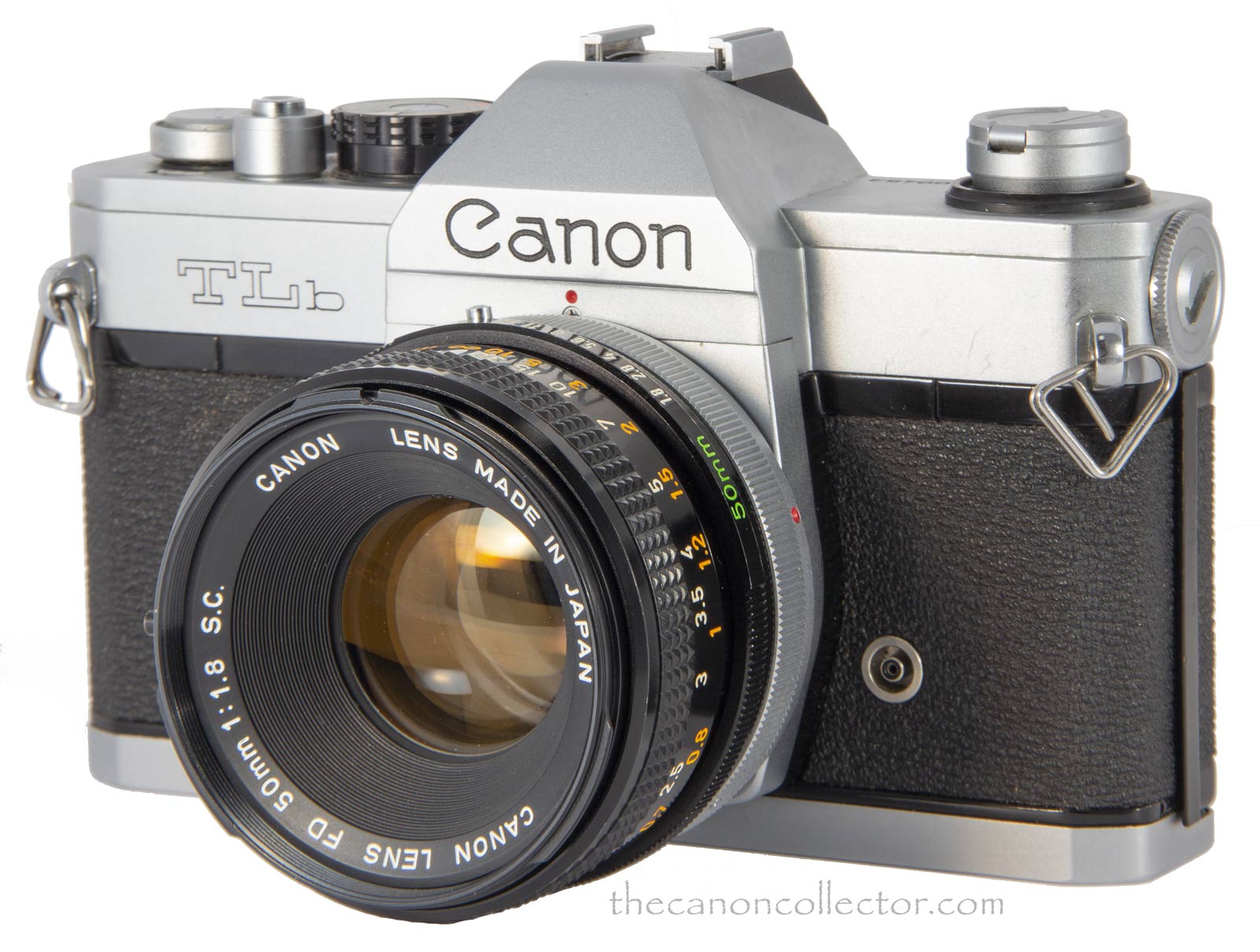 This is my TLb (Ser. No.: 169453) which is in excellent condition but which, unfortunately, no longer works. A project for a long winter’s afternoon! The PC Socket is visible to the right of the lens. This is the only flash sync on the camera. No hotshoe. 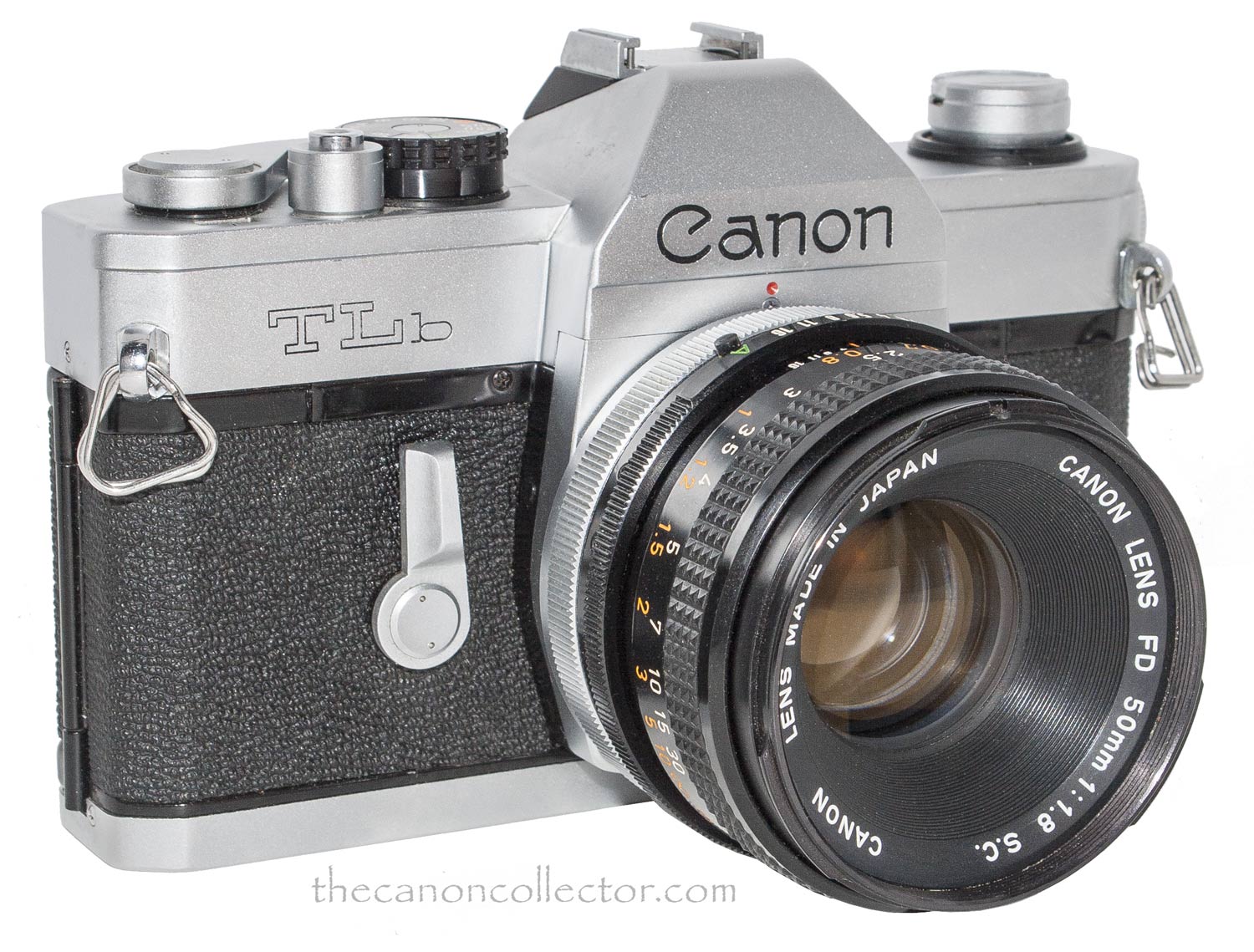 On the other side of the lens is a lever that looks like a self timer lever. But, no: it is a stop down lever. Push it towards the lens and the lens stops down which previews depth of field or allows stop down metering for FL lenses.

The Canon Museum says that the Model FTb was released in March of 1971 and that the F-1 was released in the same month. Now, Bob Shell tells us that he was selling Canon cameras at the time and that the FTb was available several months before the F-1 (check out page 50). If that is the case it would make the FTb the first camera to have the new FD mount, successor to the FL lens mount.

The F-1 was intended for the professional photographer while the FTb was aimed at the rest of us. However, the FTb was a reliable full featured camera. It was the first Canon SLR to be a resounding market success. And rightly so!

However, the F-1 was expensive and the FTb was not cheap. What was needed was an “entry level” camera for the amateur photographer and the beginner: a competent camera that eliminated unnecessary extras to keep the cost low. This was to be the Canon TLb which was introduced in April of 1976.

Placed side by side it is obvious that the FTb and the TLb are related: they look identical except for the lack of controls on the TLb. Canon has removed the on-off switch, the battery check switch, the shutter button lock, the hot shoe, and the top shutter speed has been reduced to 1/500th second. Look inside and you will see the Quick Load feature has been left out.

However, the two cameras are built on the same body. They have the same dimensions and share the same feel of a quality built precision camera. The TLb has a built in match needle light meter. The film speed can be set from ASA 25 to 1600. It is powered by the 1.35 volt PX625 mercury battery which is no longer available.

The shutter is a horizontal travelling rubberized cloth mechanism and in that regard the two cameras appear to be identical. 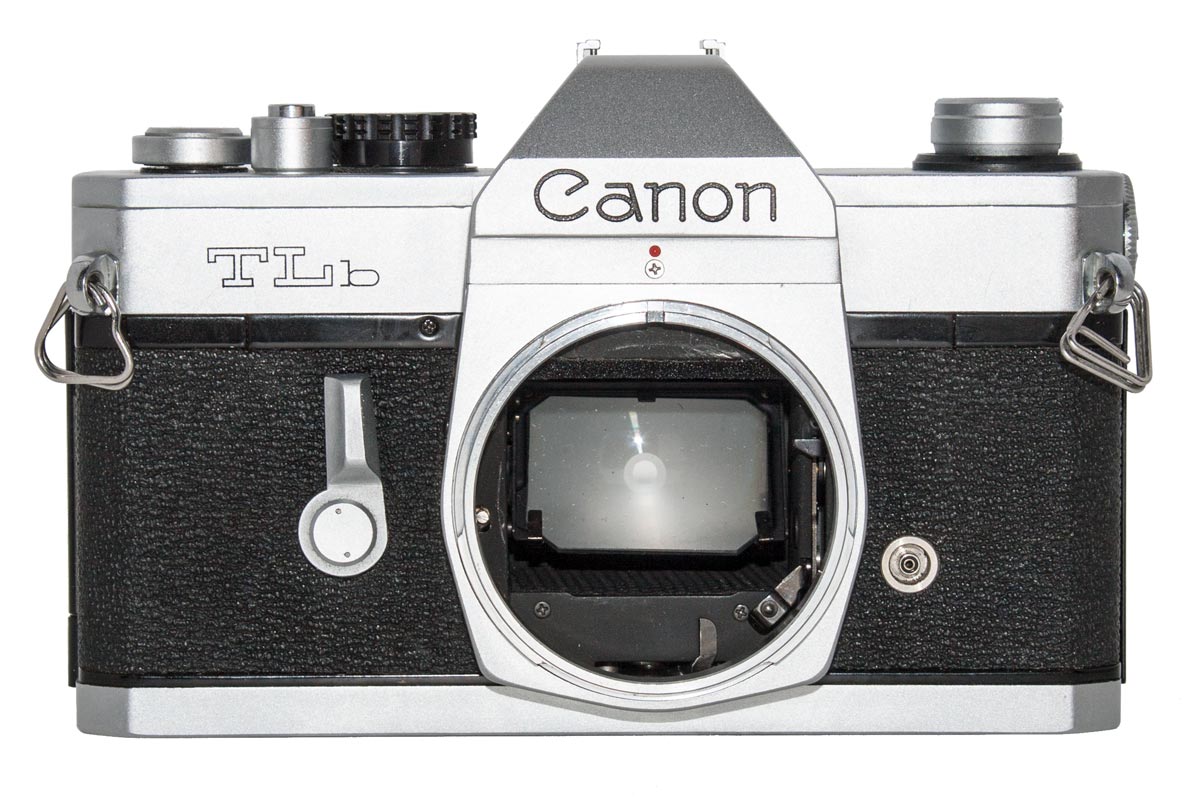 On the front, left of the lens mount (in this image) is the Stop Down Lever. On the other side is the PC Socket which is the only source of sync signal. 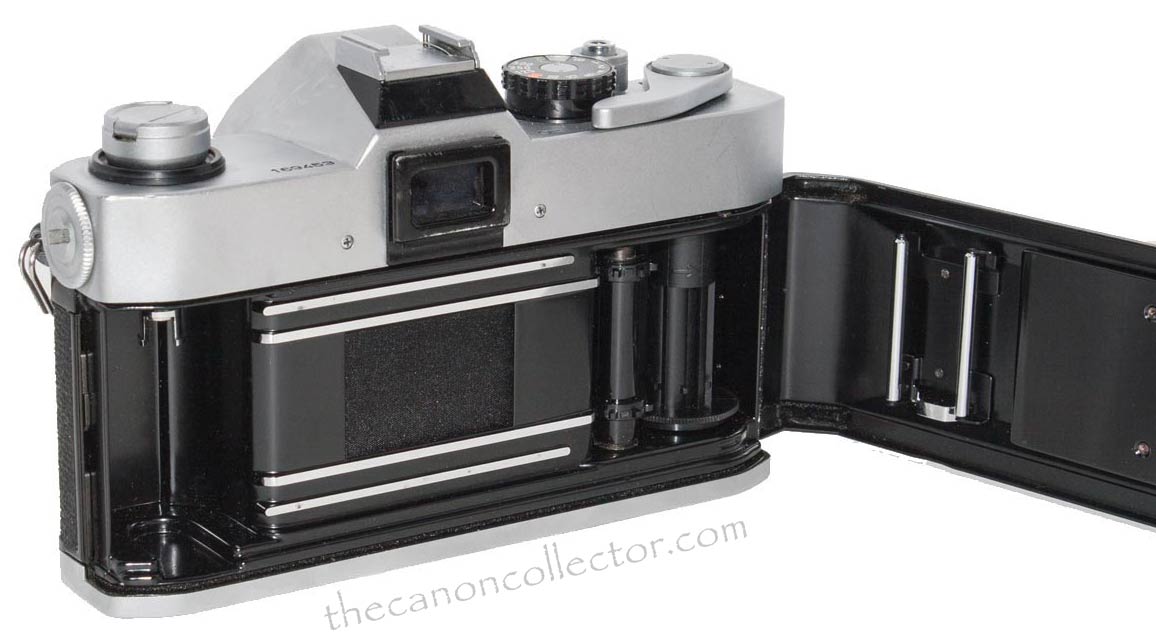 The inside of the camera has no surprises: it is completely manual. Film must be threaded into the take up spool and film advanced manually for three frames before taking pictures. 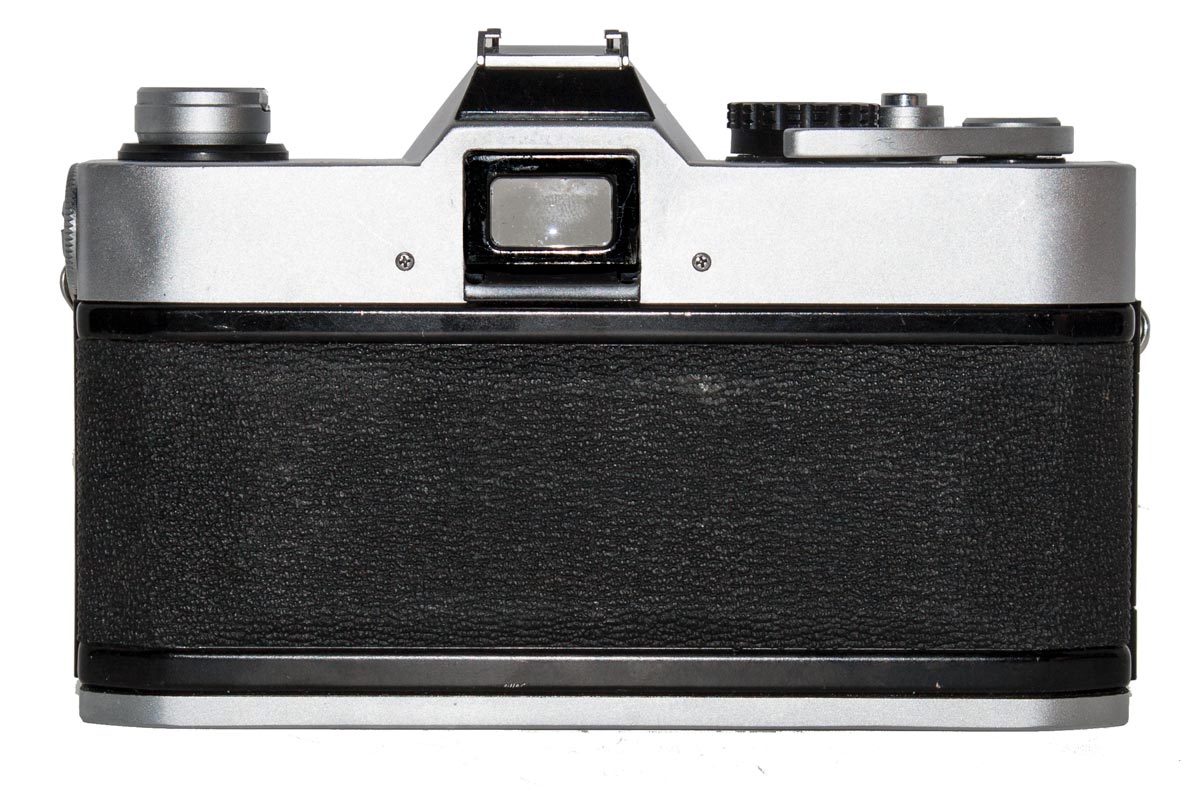 The back is plain in the extreme. Not even a clip to hold the end of the film box naming the film and film speed.

The bottom plate of the TLb is clean containing only the Rewind Release Button and the Tripod Socket. 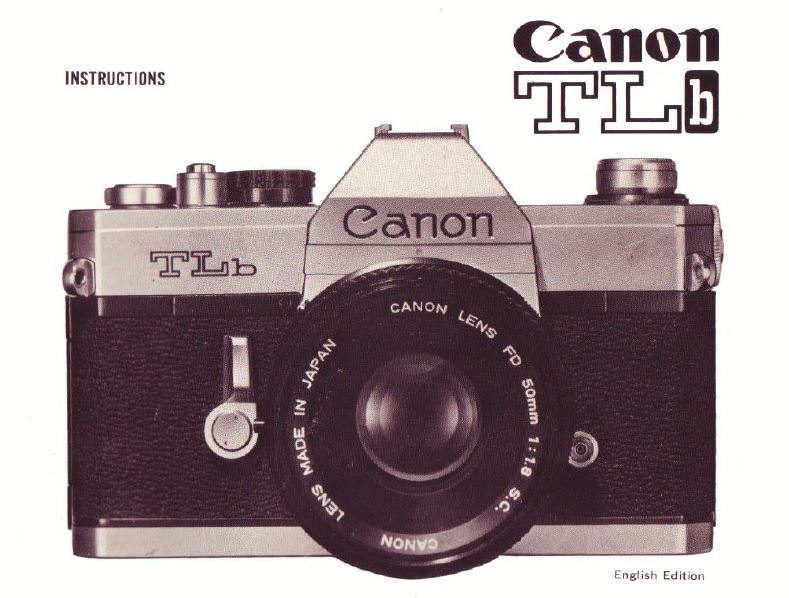 Detailed operation of the camera can be found in the Instructions. Before using this camera read this cover to cover.

It is interesting to note that Canon came out with a TLb with a hot shoe: they called it the TX. This was actually released in March of 1975. It appears to have been a parallel development with the TLb and both were marketed in the same time period. They are very similar and obviously built on the FTb body.

When thinking of these cameras think of them as a family. At the top is the F-1 aimed at the professional market. Then there is the serious amateur/semi-professional FTb. On the bottom rung is the TLb or the TX. In today’s terms think EOS 1, then EOS 5D and finally EOS Rebel. Same relationships.