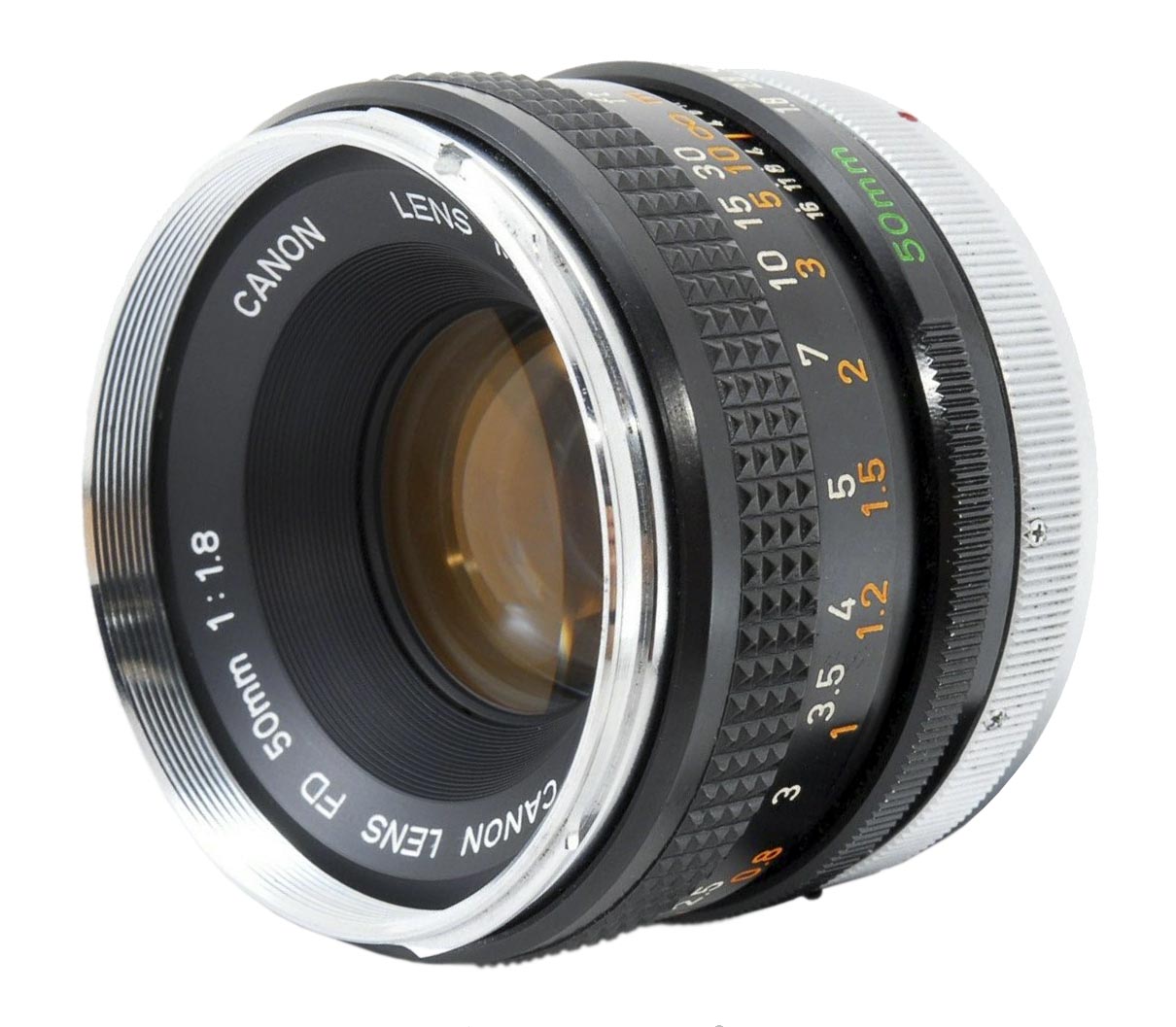 This is the first model of the FD 50mm f/1.8 lens with its distinctive “chrome nose” filter ring. 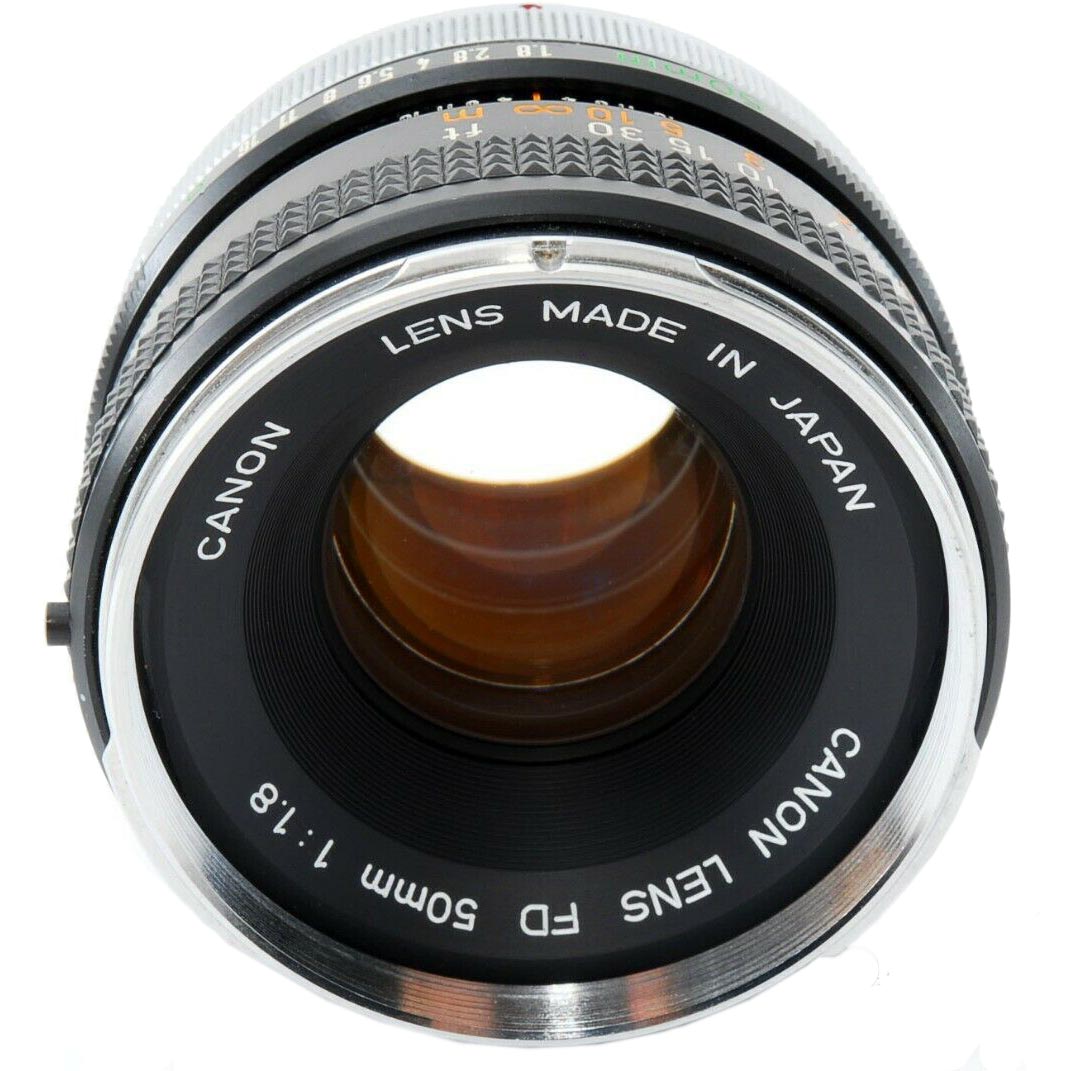 The Name Rings on the first and second versions were identical and there is nothing here to distinguish between them. 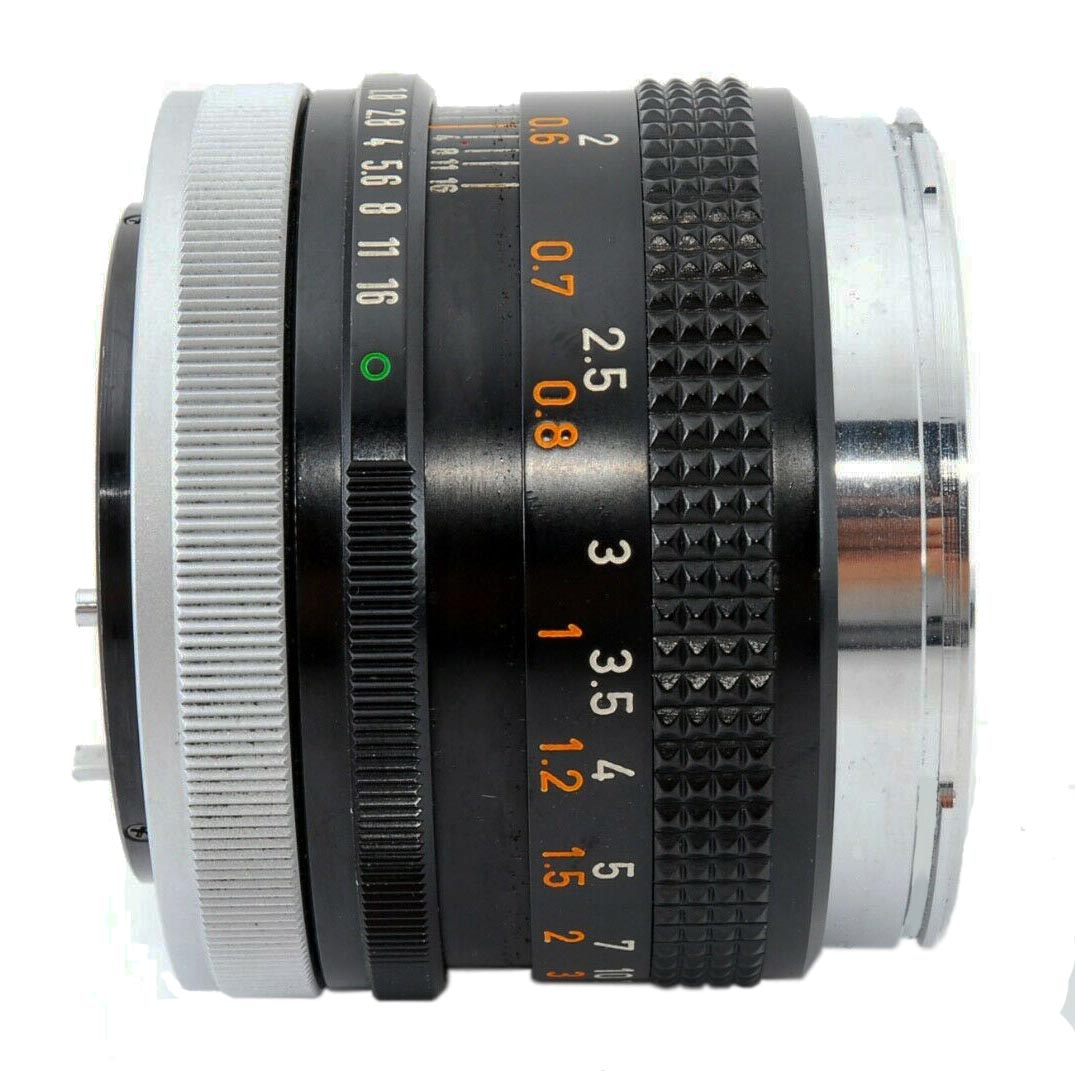 In this side view the Green “O” automatic mark is clearly visible. On the original F-1 turning this ring to the “O” setting would allow the camera to set the aperture automatically, i.e. operate in Shutter Priority mode.

If we accept what the Canon Museum says, which I think we can in this case, Canon produced 4 distinct versions of the FD 50mm lens beginning in 1971 with the  introduction with the Canon F-1 camera body. In this article we are going to look at all four of these really excellent lenses.

The first in the series was officially known as the “FD 50mm f/1.8 (I)”. Together with the second in the series, they were instantly recognizable by their silver metal filter rings on the front of the lens barrel which earned them the nick name “Chrome Nose”.

Introduced in November of 1971 it was quickly supplanted in November of 1971 by the “FD 50mm  f/1.8 (II)”, the second of our four versions. The first version can be quickly recognized by the chrome nose and the lack of a Manual Lock Lever on the back. (For the names of the various levers and bumps on the back of the lens see page 38 in the User Manual for the Original F-1 camera). It will also have a date stamp beginning with “L” , indicating 1971 manufacture, but so will some second versions. 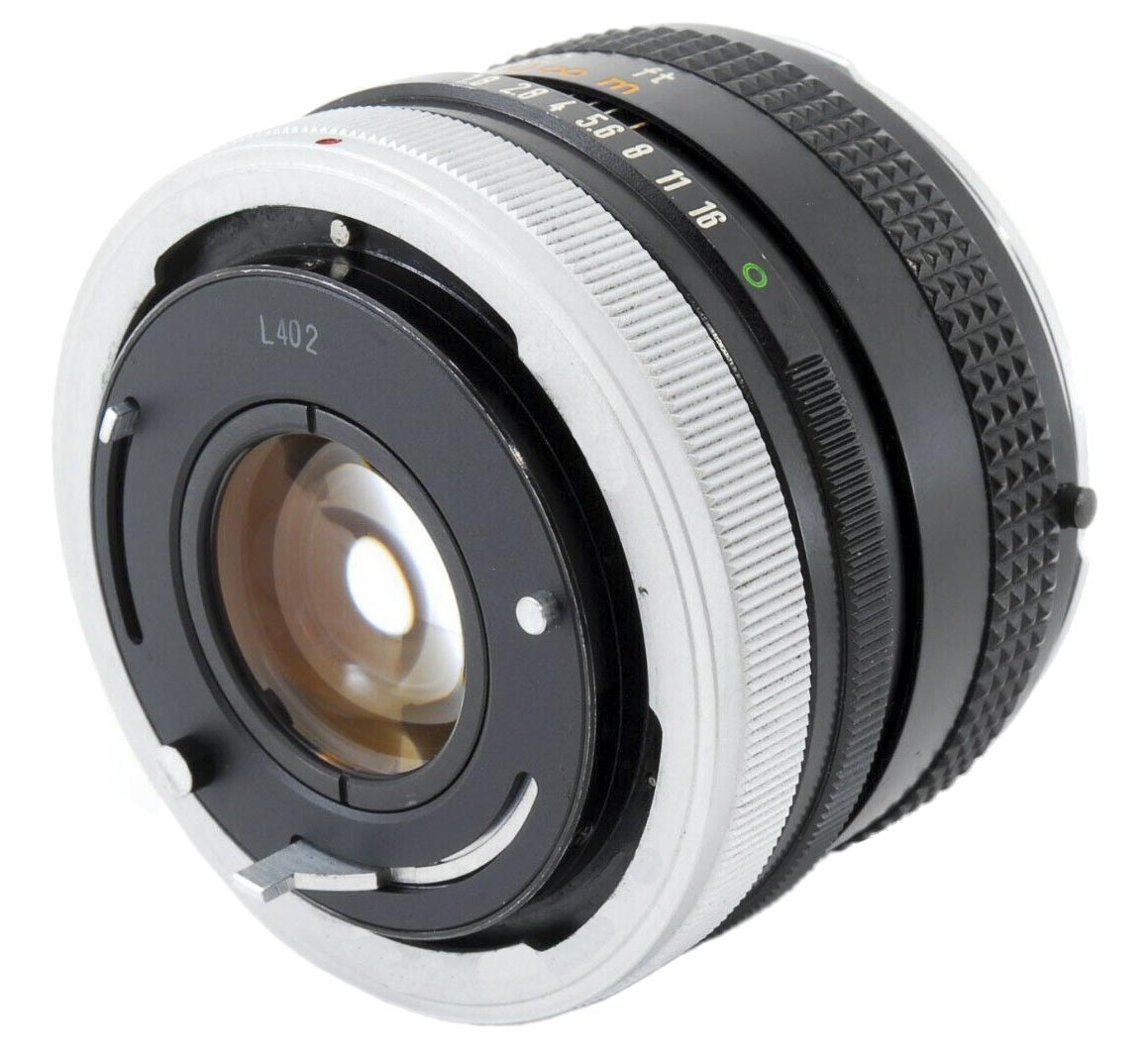 The date code on this lens, L402 tells us that the lens was manufactured in April of 1971. The Auto position, for use with the original F-1, is marked with a green “O” and there is no EE Lock Pin. The aperture ring could move easily from the manual aperture settings to the Auto setting simply by turning it.

The black tab on the front of the lens barrel, visible here on the right edge of the lens image, is a “Coupling Pin for the Flash-Auto Ring A2 or B2” according to the User Manual for the original F-1 page 38. 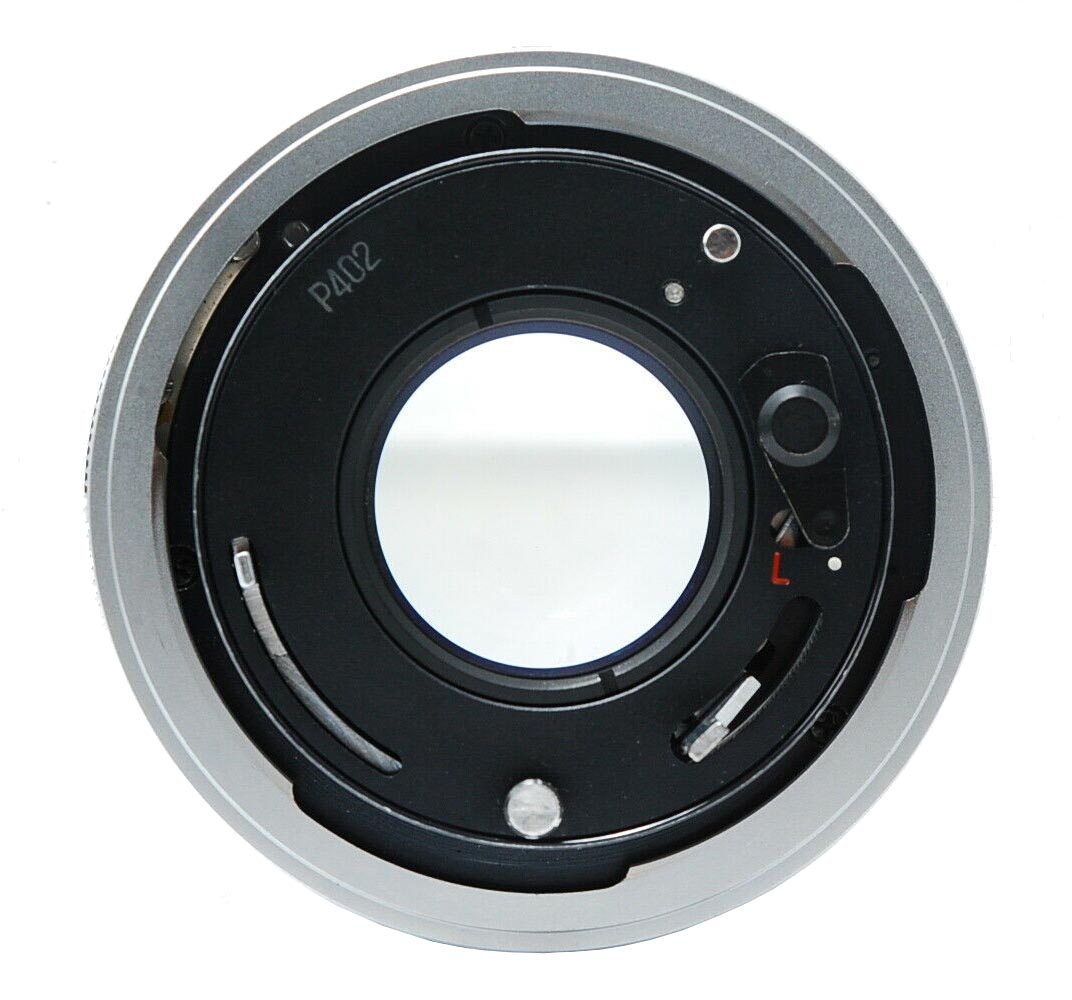 The back of the FD 50mm f/1.8 (II) showing the Manual Lock Lever. Compare this image with the back of the Type (I) shown above. In all other respects, externally, the two lenses are identical.

On the FD 50mm f/1.8 (I) if you push the Automatic / Manual Aperture Lever as far as it will go it will latch into that position and stay there till you push it back. In this position, when on the camera, the lens is completely manual and will not go to full aperture between shots for focusing. Apparently there was some equipment that could be used that went between lens and camera which did not allow the camera to control the aperture. When using such equipment this feature was necessary to allow the lens to function at apertures other than wide open.

I bring this up because when the Type (I)  was replaced by the Type (II) the only external difference visible was the addition of a Manual Lock Lever that could be set to keep the lens in fully manual mode. This is also the means by which we tell the (I) and (II) versions apart. What other changes were made internally to the optics I don’t know. Maybe none? But other than the addition of the Manual Lock Lever on the back, the two lenses are externally identical. 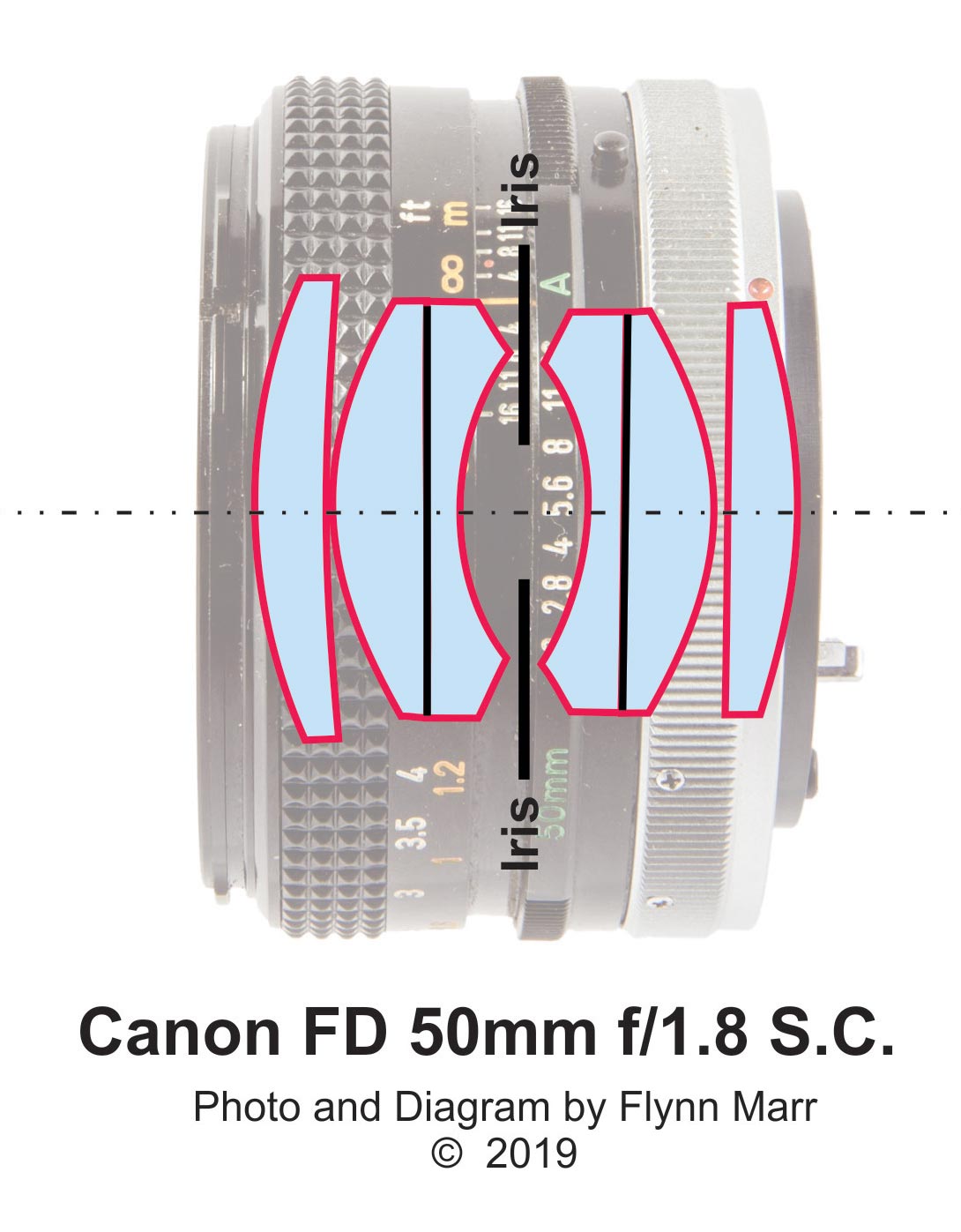 Internal construction of all four lenses we are looking at is basically the same: classic Double Gaussian. This is an old design and it produces excellent images. I am not aware what, if any, changes to this structure were made from one lens to the next.

Lens Characteristics Summary
When we chart the various features of the four lenses we can see how very similar they are. How similar the optics are I cannot say but I believe that they are identical or close to it.

In March of 1973 Canon introduced the next in the FD 50mm series: the FD 50mm f/1.8 S.C. (I). The biggest change that you notice right off is the absence of the Chrome Nose. I suspect the reasons for the change involved ease of manufacture and decreased weight. The name ring is changed by the addition of the letters “S.C.” to the name of the lens. The letters stand for “Spectral Coating”, the name Canon has given to the coating process used on the lens. You will also see on some lenses “S.S.C.” which stands for “Super Spectral Coating” which is apparently a more advanced coating. But this was never applied to the FD 50mm lenses.

There are several differences to be found in this lens. They all have the Manual Lock Lever so the back of the lens is the same as the FD 50mm f/1.8 (II). The original version continued the use of a green “O” to mark the position of the automatic aperture setting. However, Canon added a silver locking pin next to the letter which had to be pressed to move to this setting. In subsequent variations the “O” was changed to a green “A” and finally the silver pin was changed to black. Wikipedia in its FD lens article says that there were released some FD 50mm f/1.8 (II) lenses issued without the chrome nose. They would look like the S.C.(I) except the green “O” would have no locking pin. I have never seen one so this may or may not be true.

This lens is easily distinguished from the FD 50mm f/1.8 S.C. (II) by the Manual Lock Lever. The latter is missing this feature. 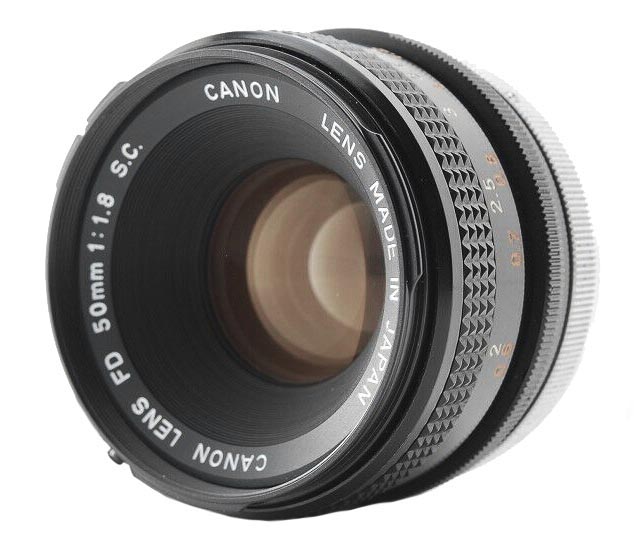 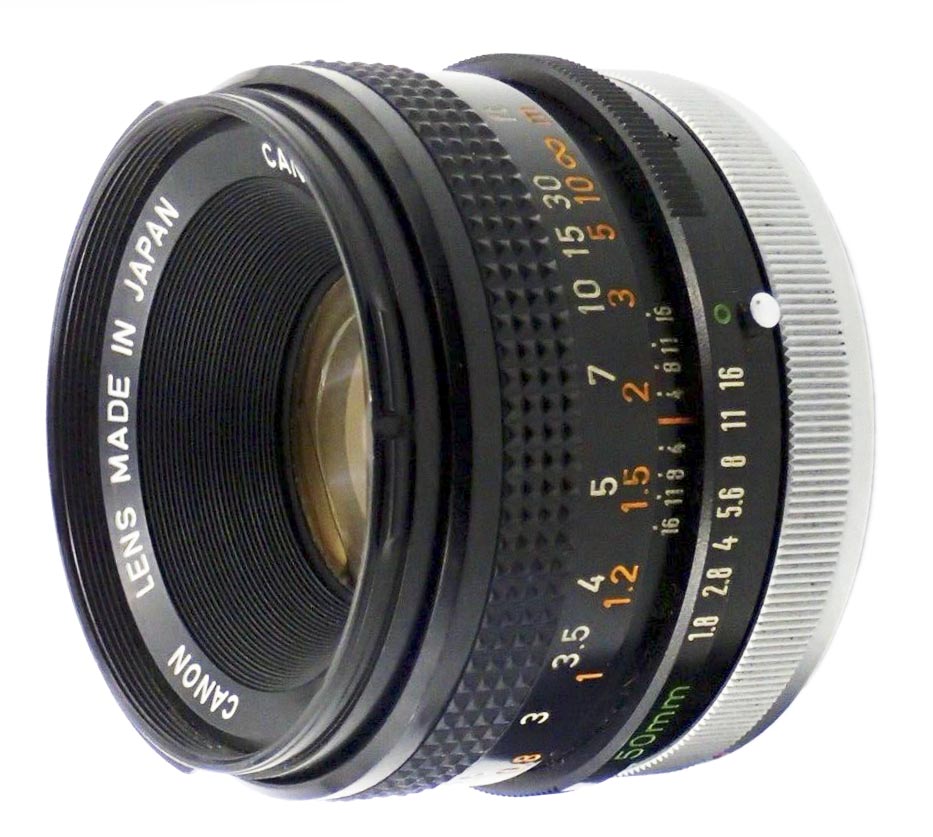 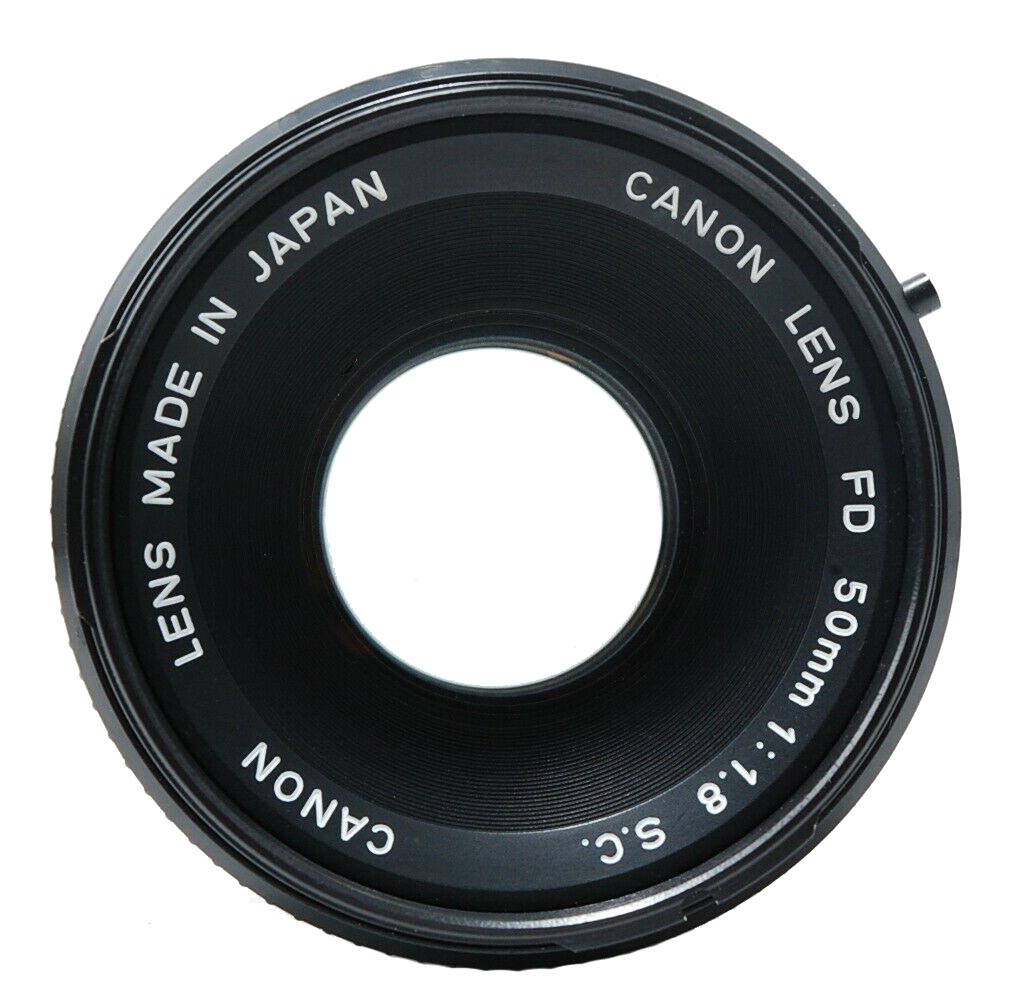 The FD 50mm f/1.8 S.C. (I) and (II) share the identical Name Ring so from the front they look identical. We have to look to the back of the lens to distinguish them. 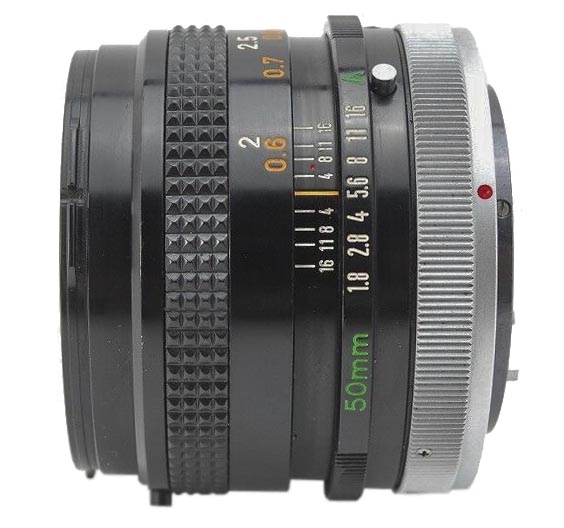 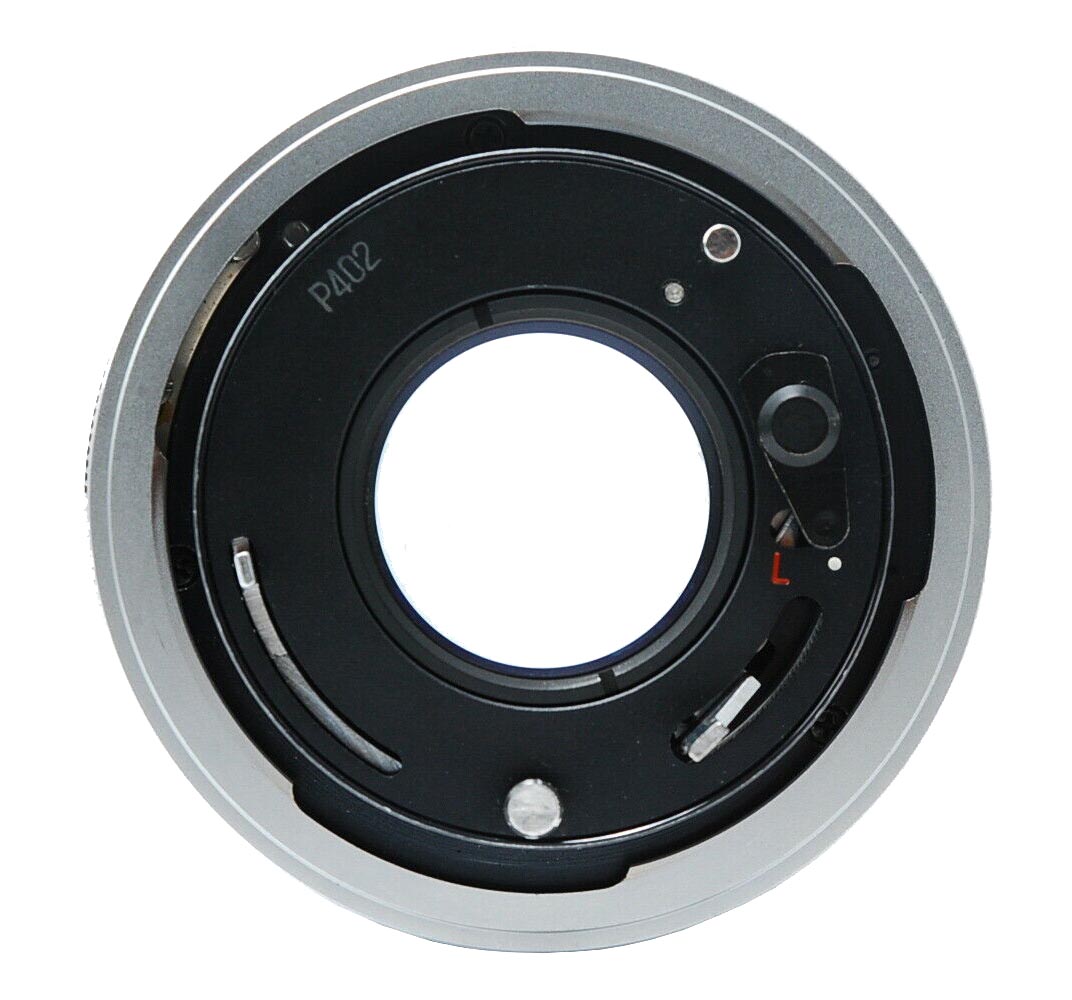 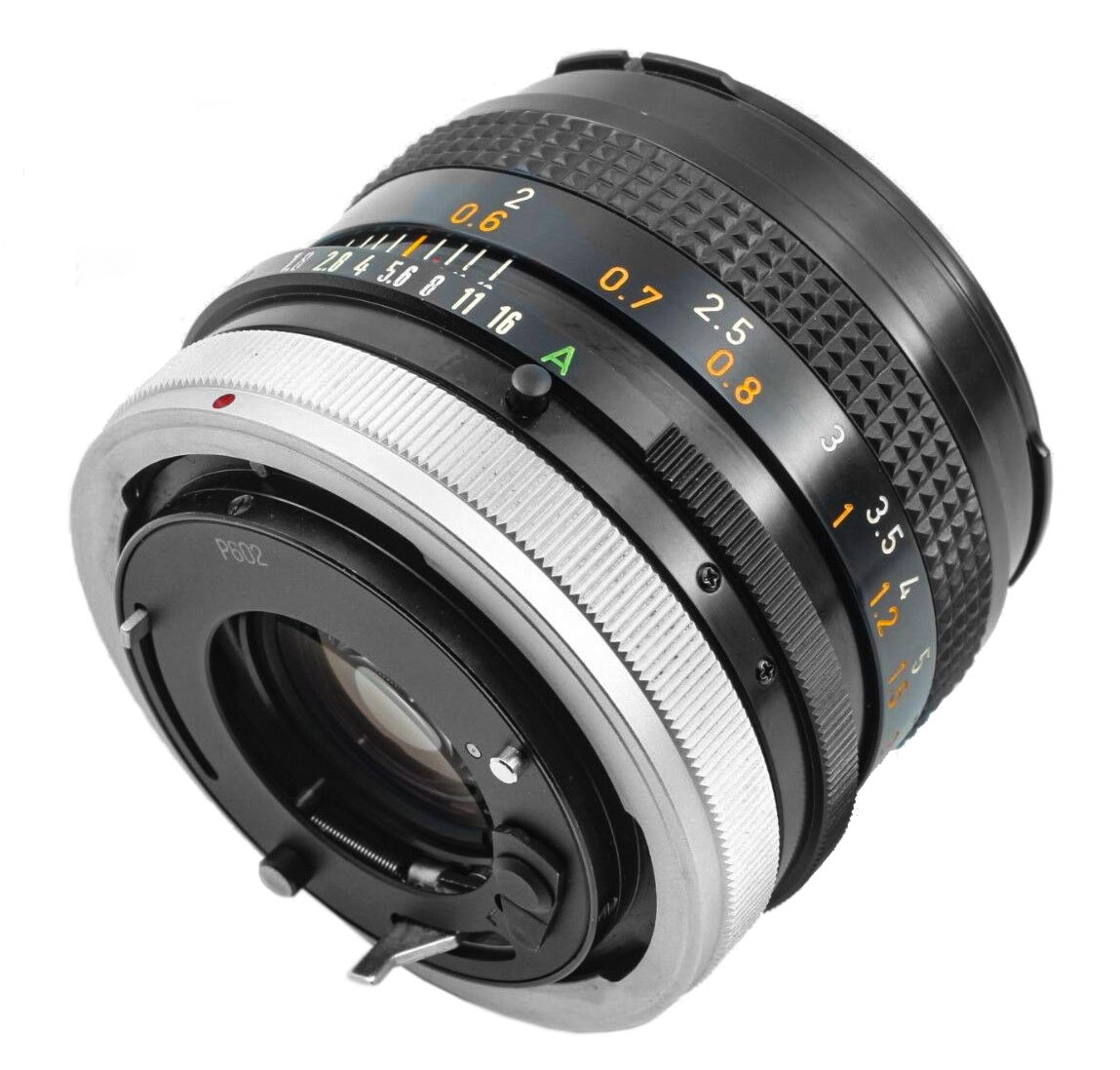 Here we have the green “A” but the pin is black. This was the last variation of this particular lens. On the S.C. (II) all pins are black.

And finally we come to the FD 50mm f/1.8 S.C. (II), the last of our FD 50’s. Introduced in Mar or 1976 this lens featured more plastic and still less weight and, again, easier to manufacture. From the front this lens is indistinguishable from the previous one. But on the back the give away is the lack of the Manual Lock Lever. A second clue is the green “A” on the aperture ring. The black button lock is offset from the letter by a full half inch. Other than those two things, it looks like its immediate predecessor. 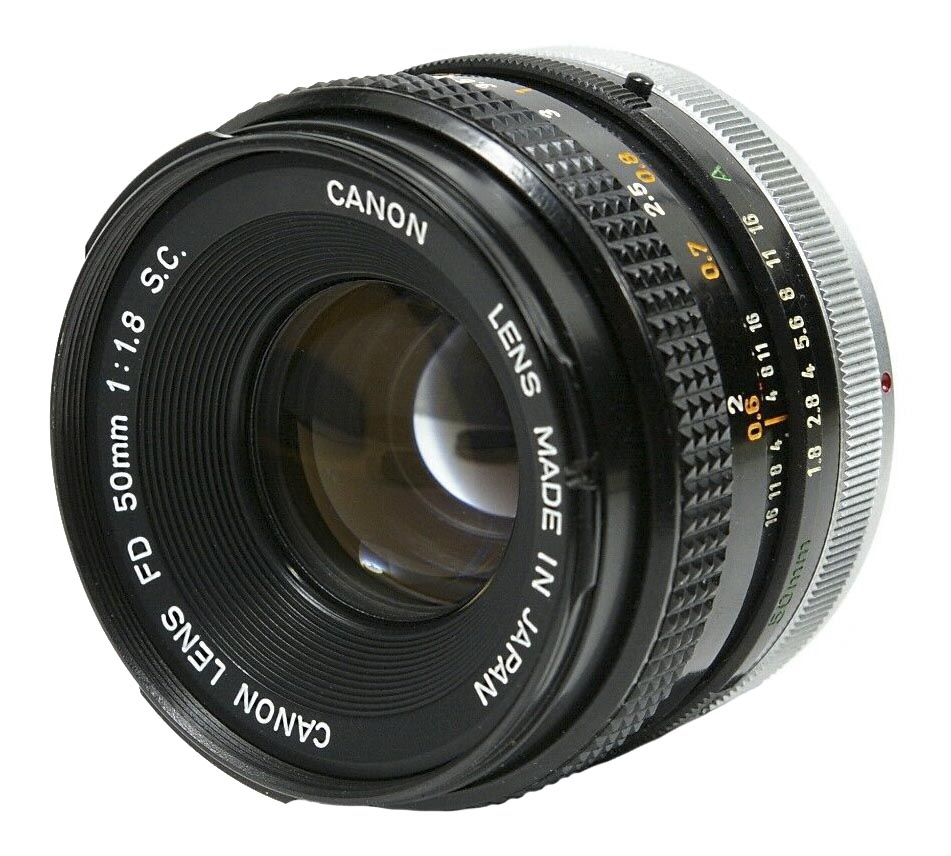 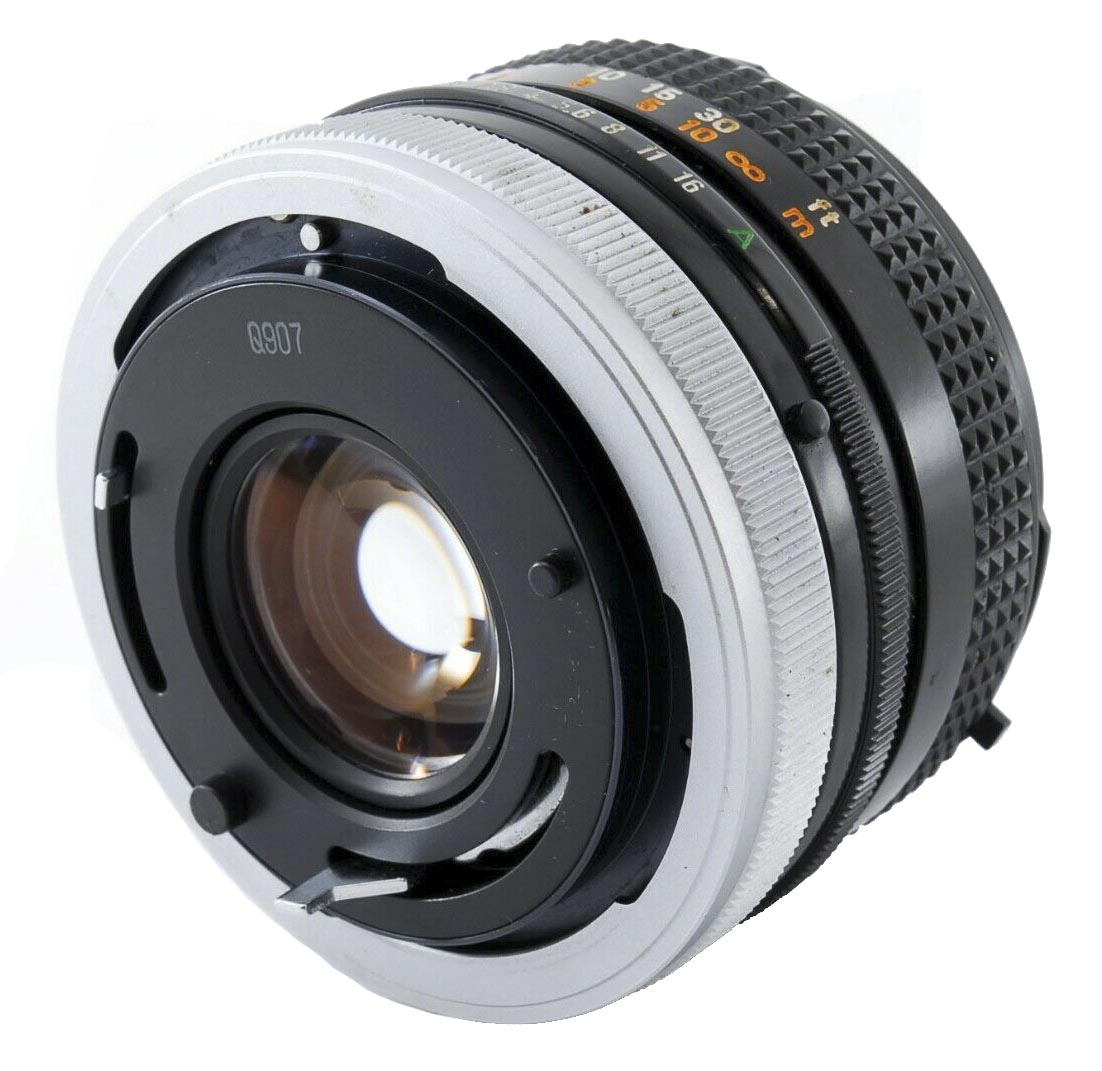 The back of the lens is clean and much simpler than that the S.C. (I). It lacks a Manual Lock Lever. Otherwise the back is identical. But note the black button lock offset to the right of the green “A”. 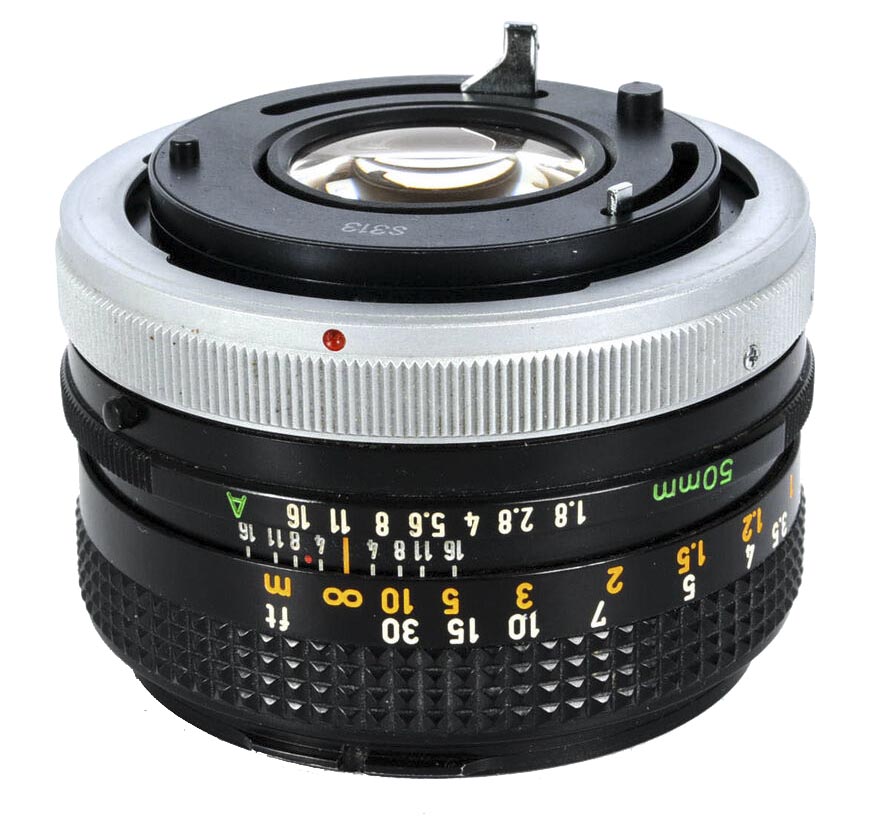 A different view of the back of the lens. Plainly visible is the offset of the black lock button from the green “A”. This is a giveaway that identifies this lens as an S.C. (II).

So there you have it. Four FD 50mm f/1.8 lens of equal quality and build. For years were the standard kits lenses for film SLR’s and as such were sold by the hundreds of thousands. At any camera show it is not unusual to see multiple examples of varying condition offered for sale.

The obvious question is “How good are these lenses?” Well, don’t wonder. Simply read on.

Comparison with a Modern EF Lens

So, now that we know the lenses and where they fit in the scheme of things, how good were the FD 50mm lenses? I do not intend to do an exhaustive comparison of all the models but simply compare two representative examples. It is my belief that the optical changes between the 4 FD 50’s are minimal so I am choosing as our test FD lens an FD 50mm f/1.8 S.C. (II) Serial Number 1581252 manufactured in November of 1978. The glass is clear and the outside of the lens is cosmetically excellent. I am sure it is representative of these lenses. For our EF lens I am using an EF 50mm f/1.8 (II).

I mounted my Canon R on a tripod and used adapters to mount the lenses. The day was cloudy and wet so the lighting was flat and even. I took my exposures both at f/8.0 and I focused both lenses manually wide open using the magnified LCD screen. Then I stopped them down. (These images are far from being “art” but they serve our purpose.)

On the Net I see comments that the FD 50’s are mediocre lenses, very soft with obvious failings at the edges. So lets see if that is true. 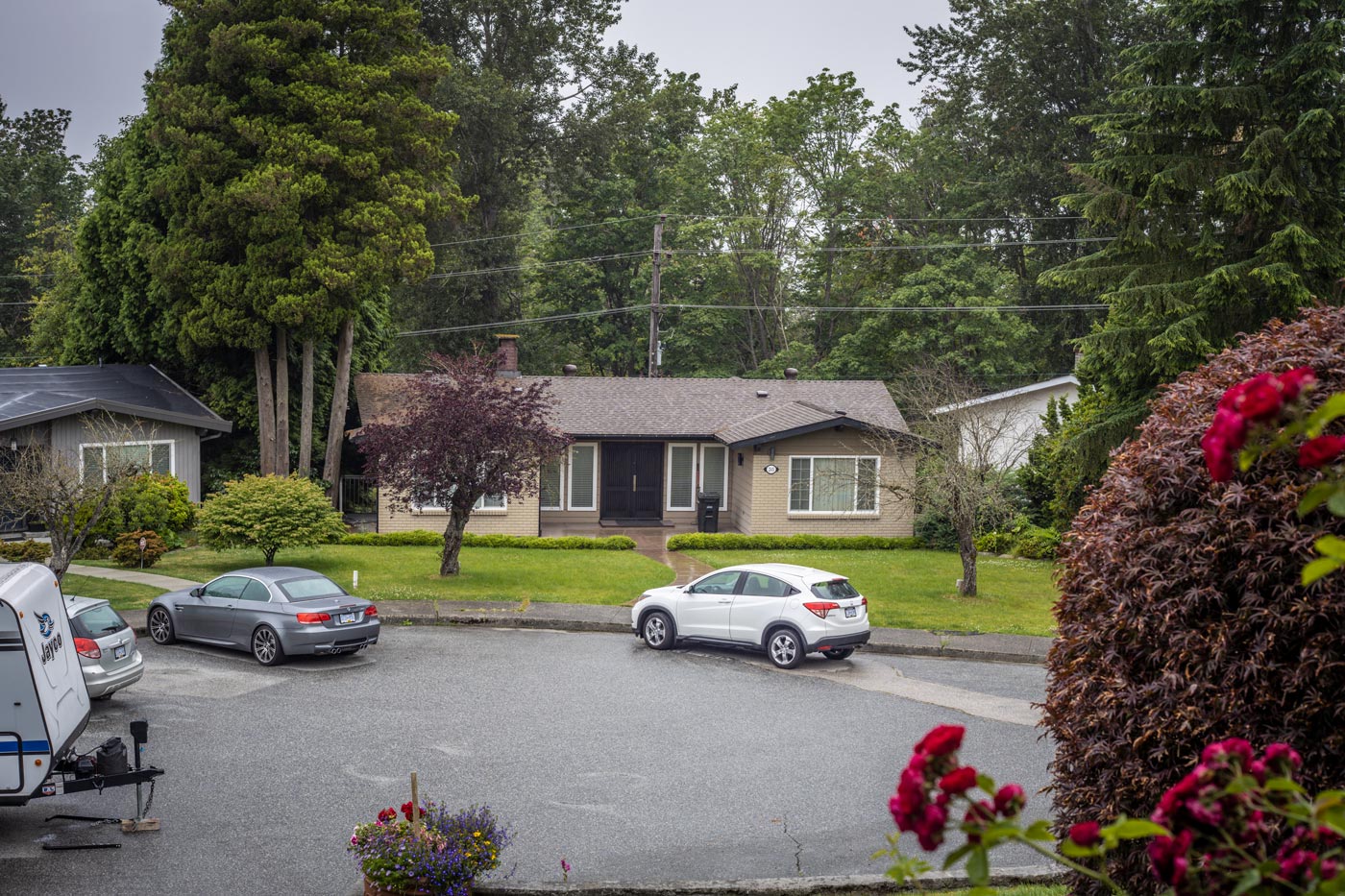 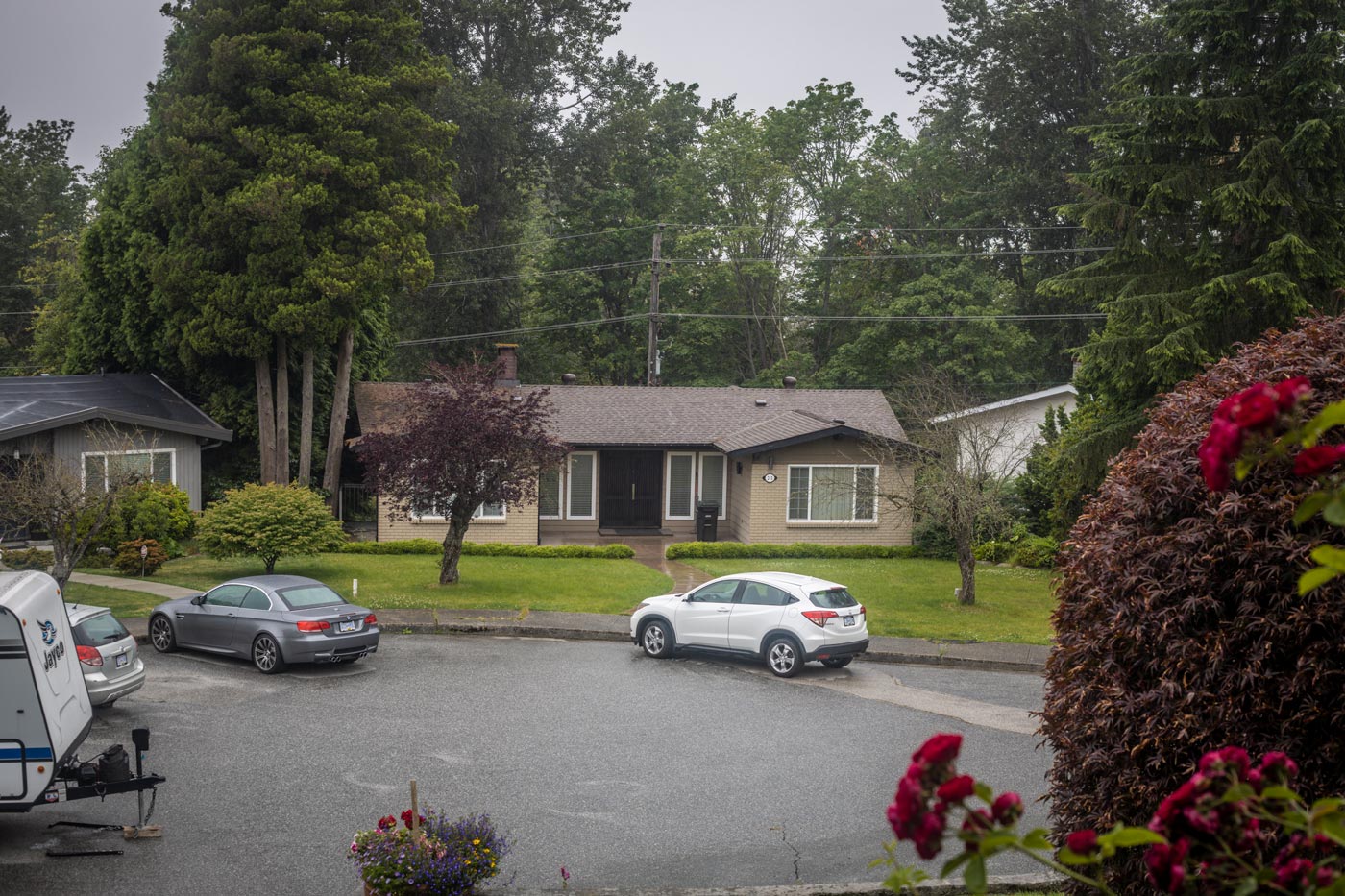 Here we have the two full frames. The camera chose the exposure settings and both images were treated identically in post processing. To me the FD lens image on the left seems to have given a snappier image but from here we cannot tell much about the relative quality. 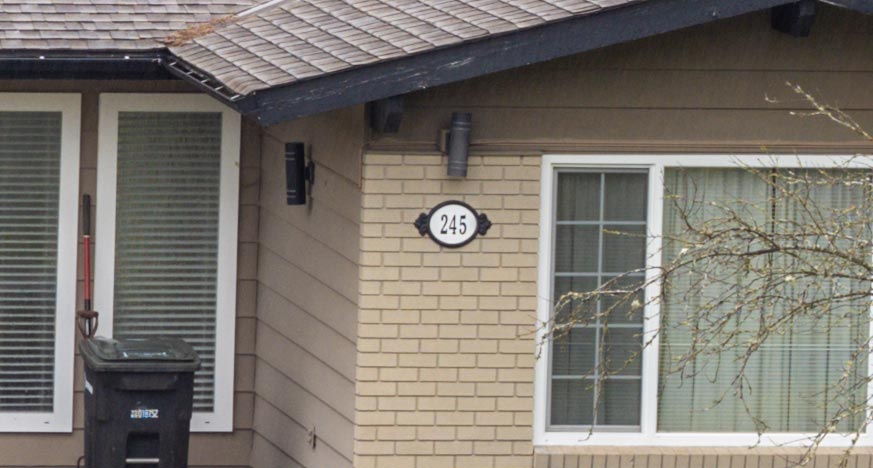 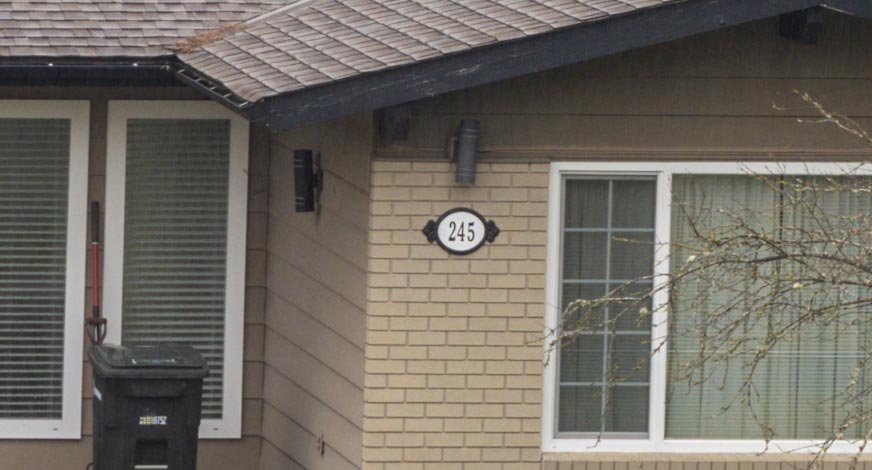 If we look more closely, at 200% in Photoshop, we can see the image begin to pixelate but, to my eyes, I can discern no difference between the two. They are so similar that I went back and double checked that I had put the correct images into the page. I did and these are images from the two lenses, FD on the left and EF on the right. 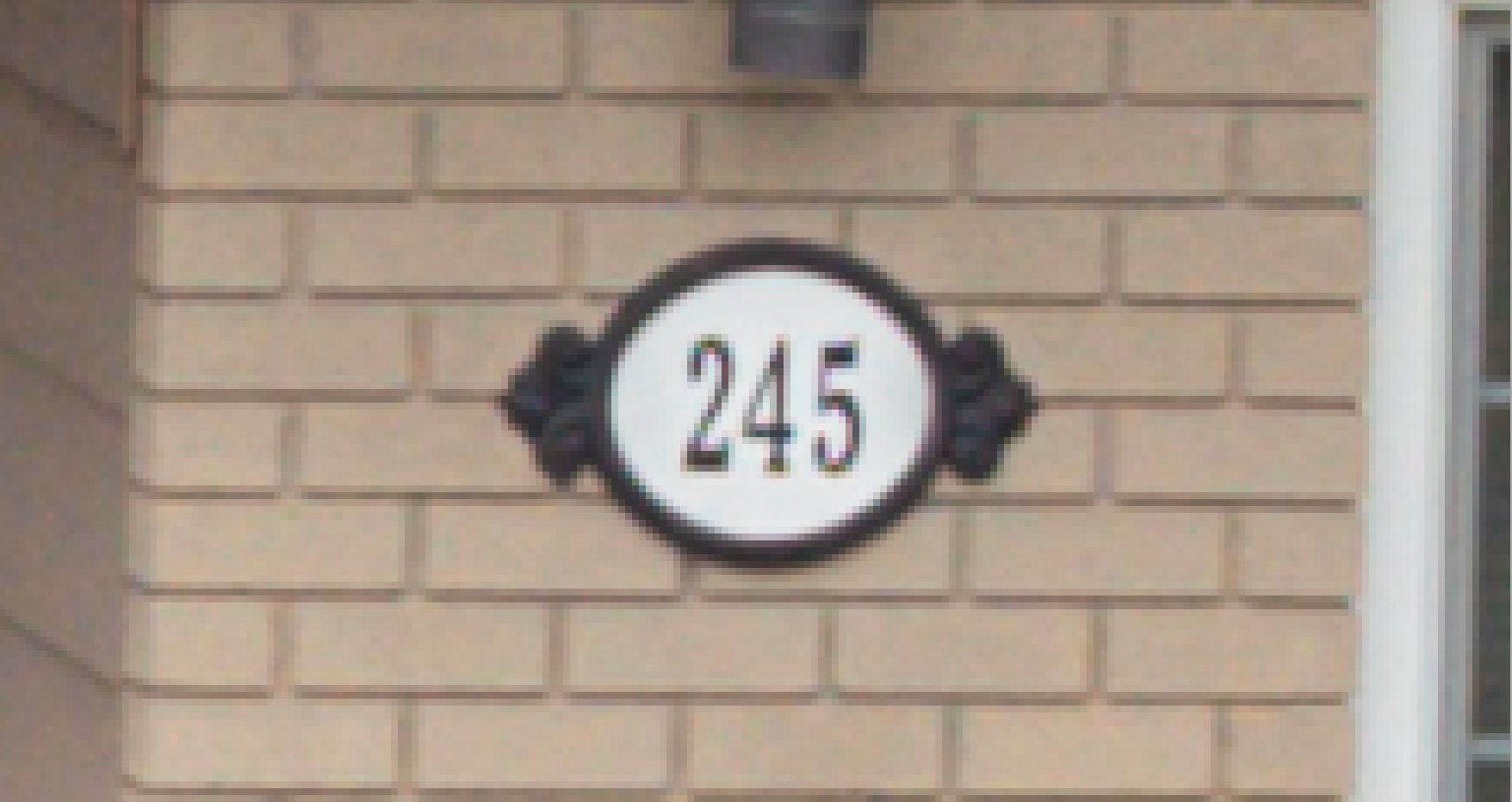 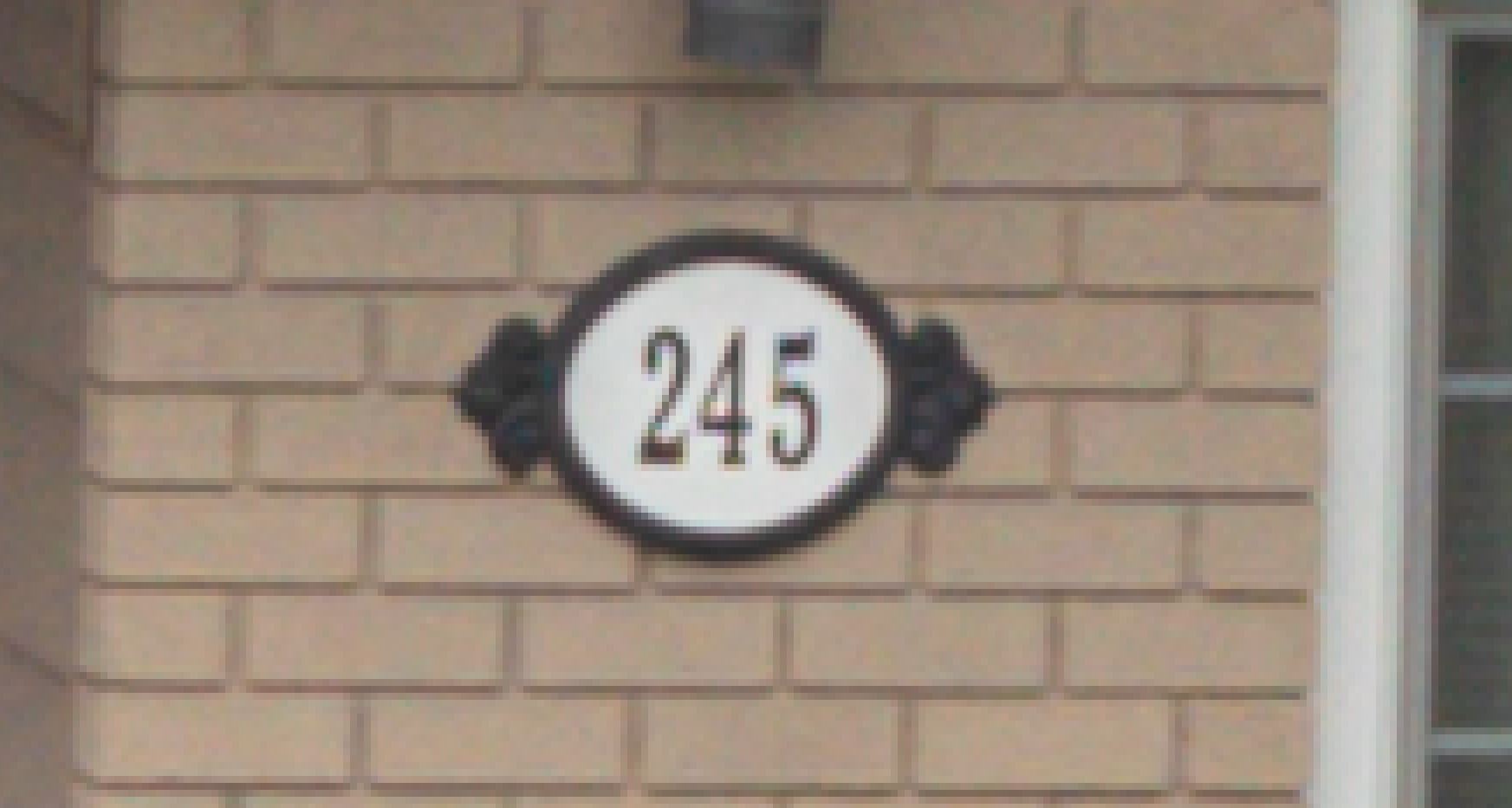 Zooming in further, until the pixels are obvious, I am still unable to say which is better! This FD lens holds up really well against the modern EF lens. I actually think I prefer the FD image as being more delicate with better color. But it is close.

So, in the center of the image where you expect the best results the FD lens is a definite performer. But what about the edges. This is where lenses struggle, especially in the corners. So lets have a look in the upper right hand corner of this image. How does the FD do there? 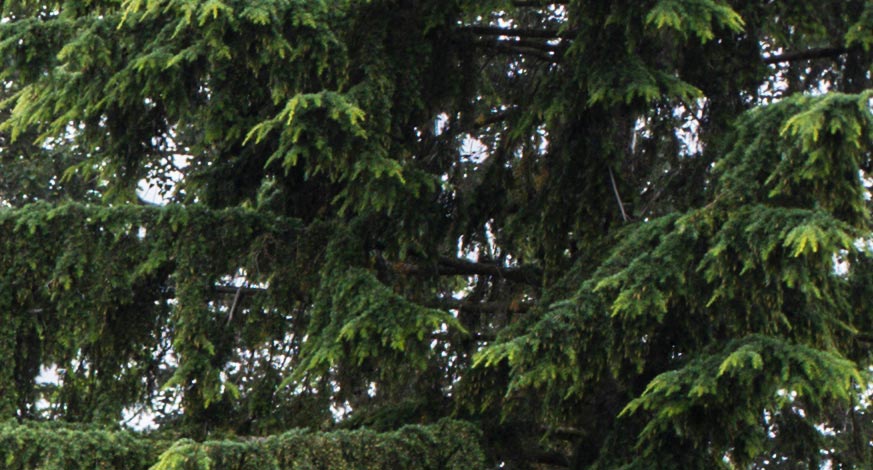 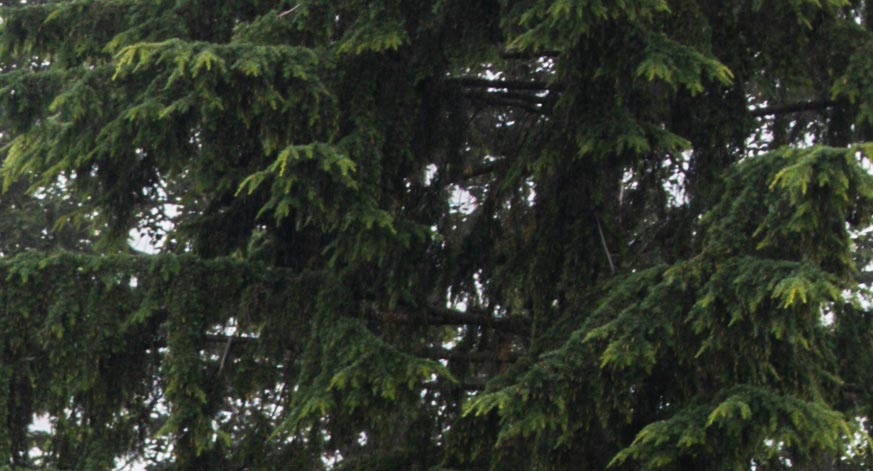 These images at 200% come from the upper right corner of the frame, FD on the left and EF on the right. If I had not labeled them you would have been hard pressed to tell which was which. Both of these lenses perform well in this most difficult spot. Of course, most lenses at f/8.0 do pretty well.

As I said, this is not an exhaustive test and I am not going to compare these lenses wide open. Both will perform less well. However, I always shoot at f/8.0 or f/11 when ever I can, even if that means pushing the ISO to 200 or even 400. On the EOS R it is hard to notice the difference at 400 or below.

At f/8.0 the FD 50mm is an outstanding lens. I don’t know where people get the comments that these lenses are soft or otherwise less capable. And now that I know what this particular lens can do, I intend to make more frequent use of it. It is a great lens notwithstanding its 40 years.