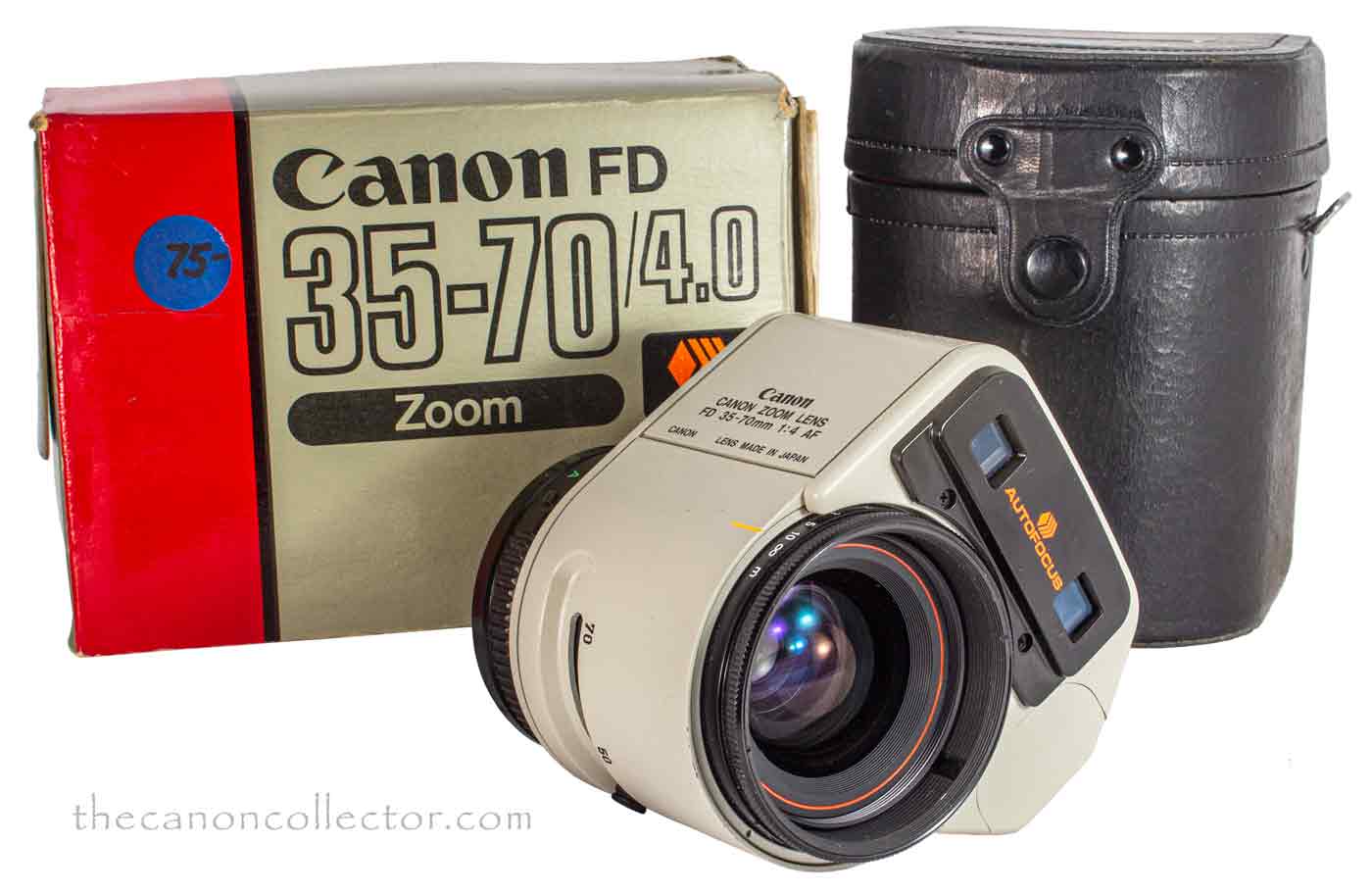 Automation has been the Holy Grail of
the photo industry for decades.
Rangefinders and light meters were
heralded as marvels in their day and
took much guessing out of focusing and
f/stops. But that was not enough. Next it was putting the light meter in the camera and letting it set the aperture at first and then the shutter speed. But a camerqa that would focus itself was

the unreachable goal throughout the 1960’s and 70’s. And, like all new technologies,  there were many false starts and missteps as the various camera companies worked out how this was going to work.

I have searched for information on the FD 35-70mm AF and there is very little. I do not have a manual for it and I can find no detailed description on how it worked. The best historical comments are in Bob Shell’s excellent book “The Canon Compendium”. He says that Canon had an autofocus development program prior to 1963 because at that years Photokina show 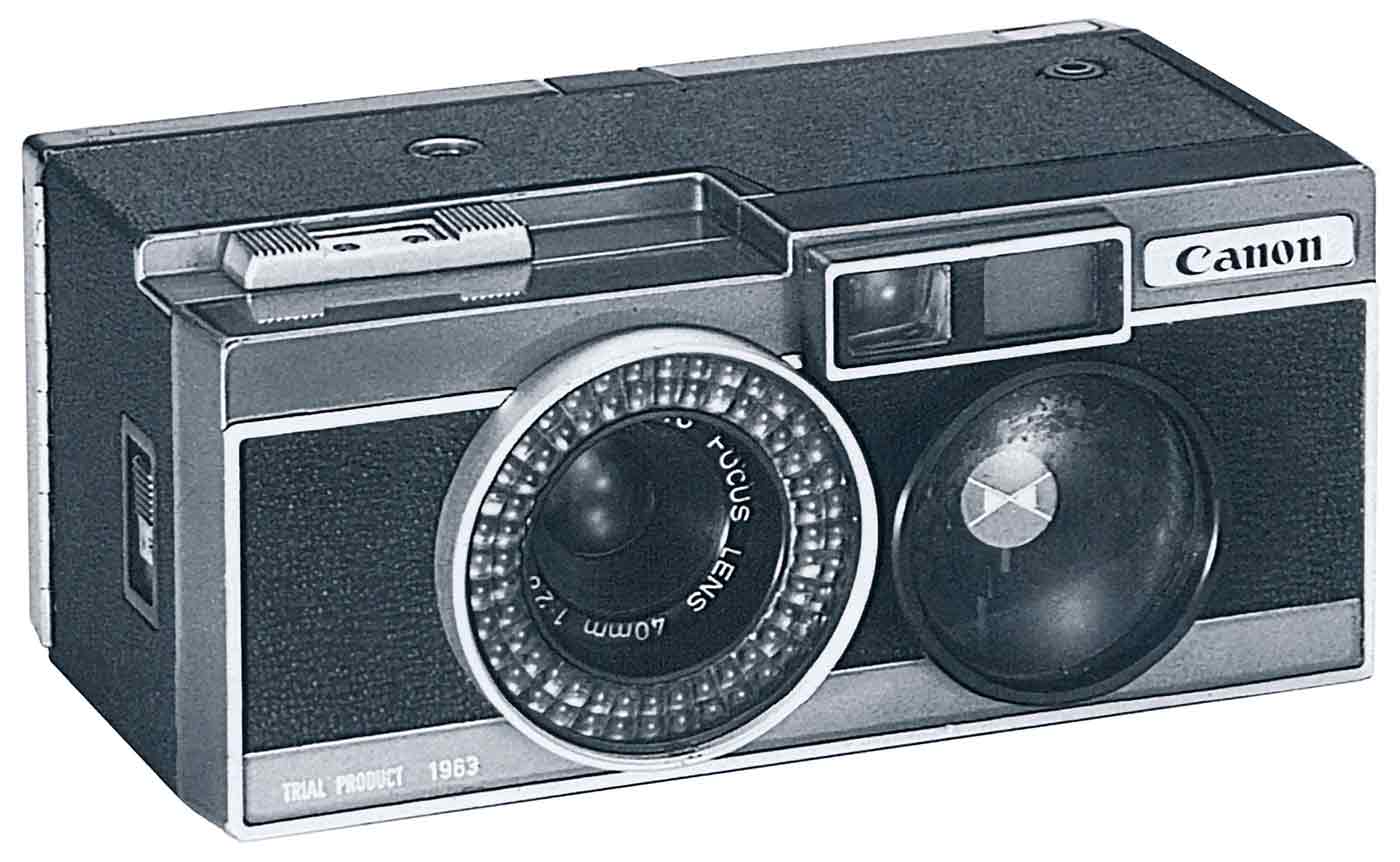 Canon Autofocus Prototype. The circular device to the right of the lens is the distance auto-sensor. I have no idea how it worked. (Photo is from Bob Shell’s “Canon Compendium“).

they demonstrated a working prototype of such a camera and suggested that a commercial product was only a few years away.

The next year, 1964, a more advanced model was shown at Photokina. These two were 35mm cameras. Then in 1966 they showed a third version which was built around a 126 film size.

It was not until November of 1979 that Canon introduced their first production autofocus camera, the Sure Shot AF35M. The autofocus system was based on triangulation with an IR beam sent out by

the camera. The AF35M was also the first Sure Shot camera of that long series. It was Canon’s first fully automatic camera with auto exposure, auto focus, and auto wind and rewind. Nice, but a long way from a professional lens for a real camera. But Canon was learning. 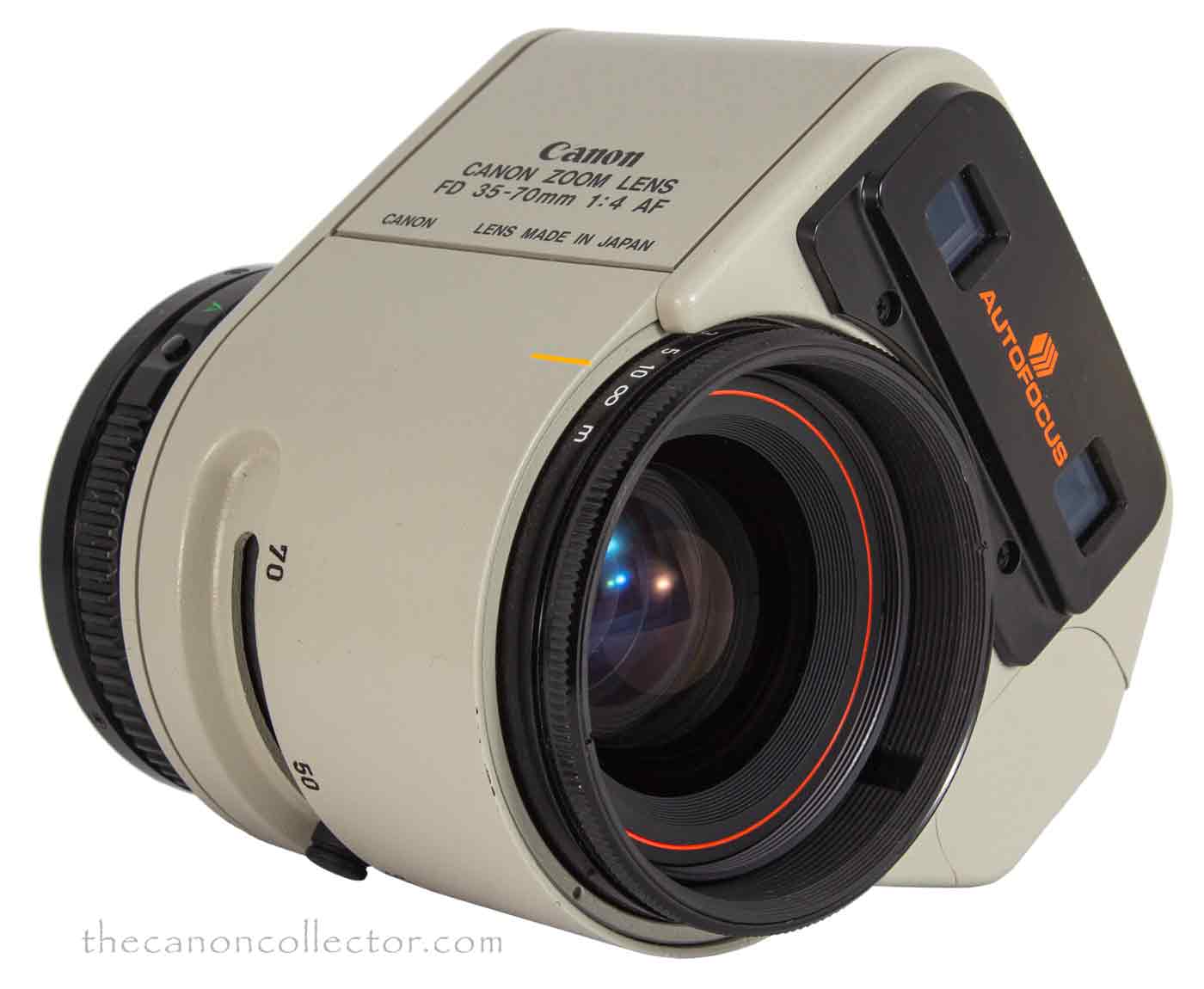 The FDn 35-70mm f/4.0 AF lens is an awkward looking device.  The two square windows set at 45 degrees to the axis of the lens sample light from the scene to determine the distance to the object.

In 1981 Canon was producing the FDn series of lenses and they had a large user base of FL, FD and FDn lens cameras. Their first foray into interchangeable
self focusing lenses was the FDn 35-70mm f/4.0 AF lens which they introduced in May of 1981.

This was not the first auto focusing production lens. That honor goes
to the Pentax ME-F camera which
was released a few months before
with an auto focusing lens. Olympus
also released the OM S Zuiko MC Auto Zoom 35-70mm f/4 for use on Olympus cameras with the MC lens mount.

This Canon lens was unusual in that it was a standard FDn lens and would
fit on any camera able to take such lenses, from the Canonflex to the then
current AV-1. The focusing mechanism

was internal to the lens and did not require communication with the camera. In fact, the lens would focus whether it was mounted on a camera or not. Canon called this system the SST (Solid State Triangulation) Auto Focus.

I think we have to view this as an experimental design because the method of focusing and the overall design and concept were not followed up with any further examples. This was a one of and, I think, a step in an evolutionary process.

The lens itself would appear to be the FDn 35-70mm f/4 of 1979 installed in this housing. It consisted of 8 elements in 8 groups, had a 6 bladed iris that went from f/4 to f/22. Canon says it was the world’s first auto focus zoom lens.

The lens is powered by 2 AA batteries and contains the motors required to drive the focus elements. It senses distance to the subject by sampling light from the object through two square windows on the front of the lens. The angle of the incoming light from the central axis of the lens is measured and that angle is transformed into a lens position that yields correct focus. This measurement has no moving parts and is done electrically. A diagram would be helpful here:

This diagram is a composite of a couple I found on the internet and some thinking on the subject. Much guesswork was involved. But I think it works like this: For a Photo Subject at an infinite distance the light rays entering the two rangefinder windows wilol be essentially parallel to the axis of the lens (blue rays). The light ray will be collimated by a lens and then by a series of mirrors strike a 240 photo sensor array. For any subject that is closer there will be an angle α that varies with the distance d1 from the subject to the lens. When the red rays hit the sensor they will be a distance d2 appart. The distance d2 will depend on the distance d1 which a small microprocessor will convert to a focus setting for the lens. 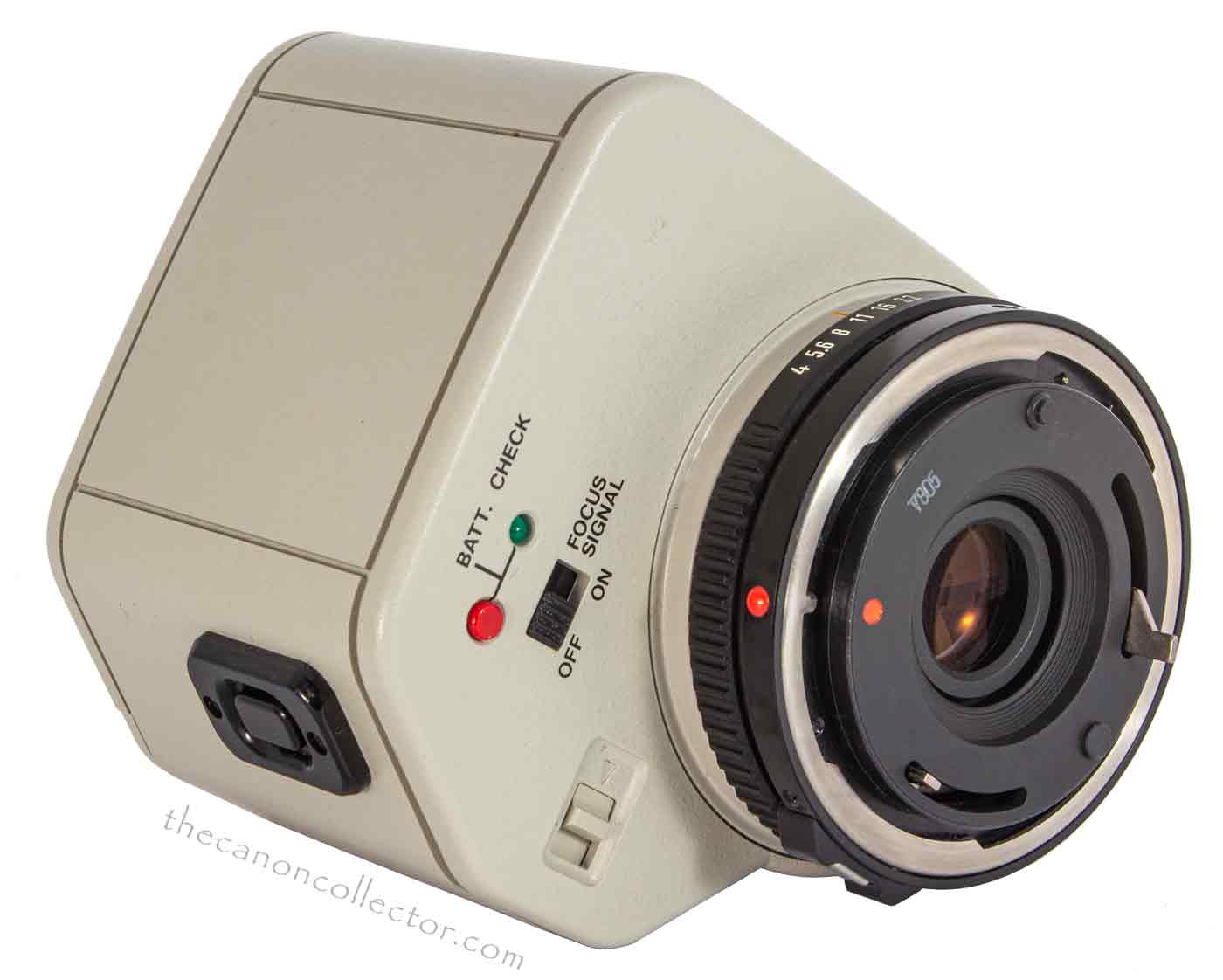 The rear of the lens is a standar FDn mount. The f/stop ring is visible just ahead of it. The red button is a battery check. The small on-off switch turns an audio signal which indicates correct focus on or of. Below that is the battery compartment release. There is no on-off switch. The large button on the left activates the focus mechanism. No current flows unless it is pressed. 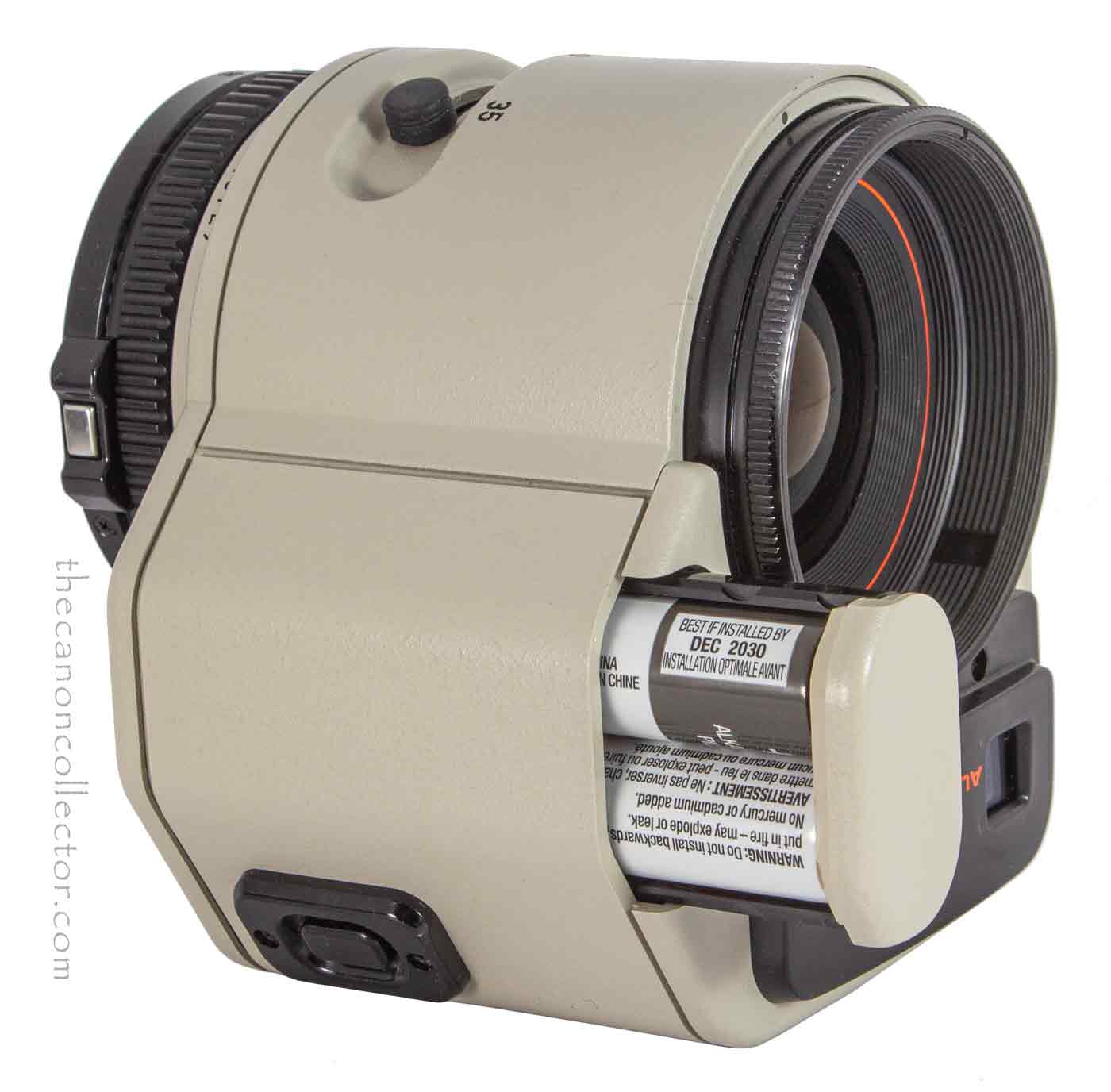 Power is supplied by 2 AA cells in a small tray that slides in from the front. The lever just visible at the top in the image controls the zoom focal length.  When the lens is mounted on the camera this lever is on the bottom of the lens in a position I found rather awkward to use. At the very front of the lens you can see the knurled ring for manual focus of the lens. 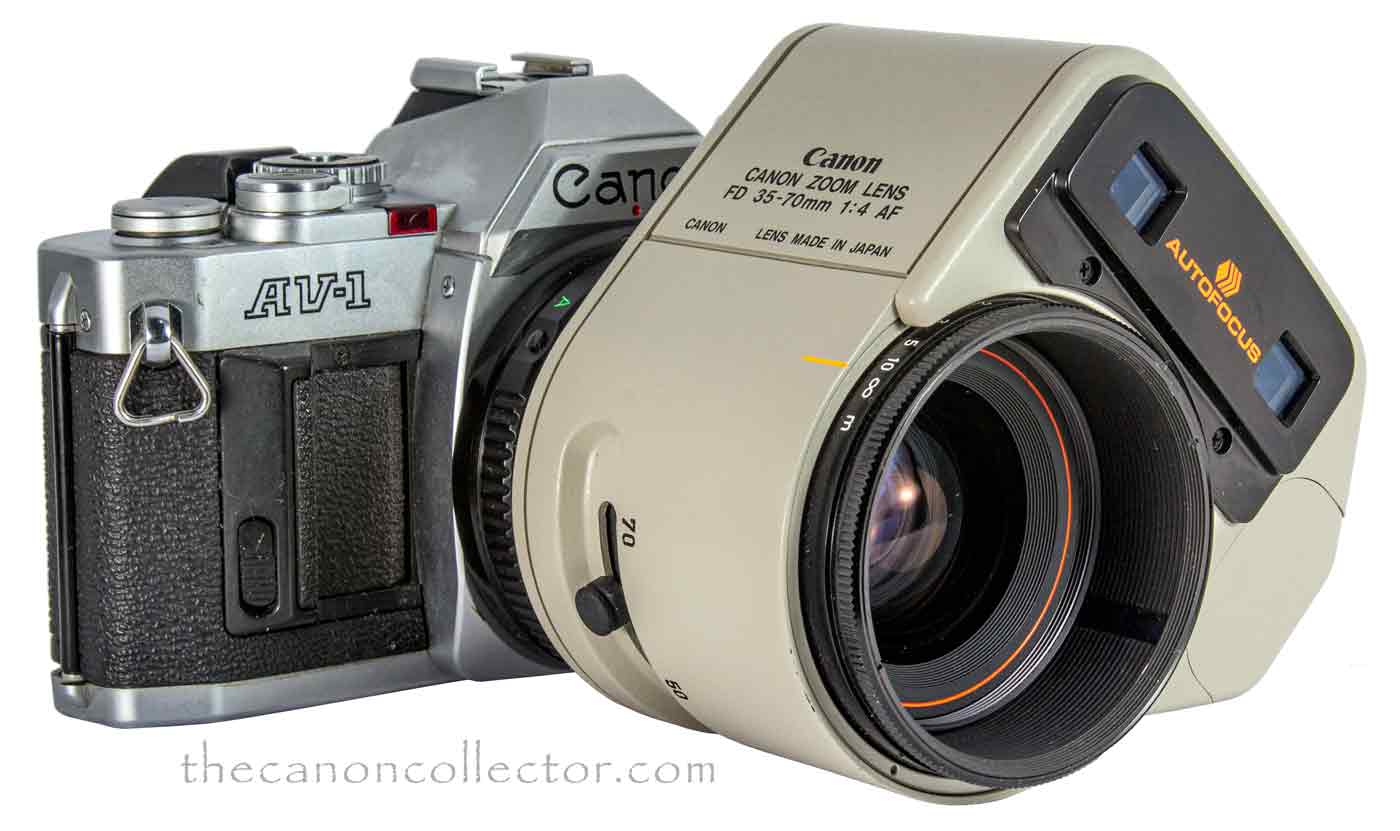 The FDn 35-70mm f/4 AF is shown here mounted on an AV-1 which was a currently offered camera at the time of the lens’ release. Notice the two Rangefinder Windows are arranged at 45 degrees to the horizontal. Probably significant but I have not figured that out yet.

The lens was very easy to operate. It mounted on the camera in the same manner as any other FDn lens. F/stops were handled as usual, with auto operation available by setting the lens to the green “A” setting. The zoom function was handled by a lever on the lower right side of the lens housng.

There is no 0n-off switch however no power flows unless the Focus Button is pressed. There is an audible beep when focus has been achieved. It is not very loud but it is useful to hear what the lens is doing. It can be switched off if desired by a slide switch on the back of the lens. There is also a battery test button and light there as well. 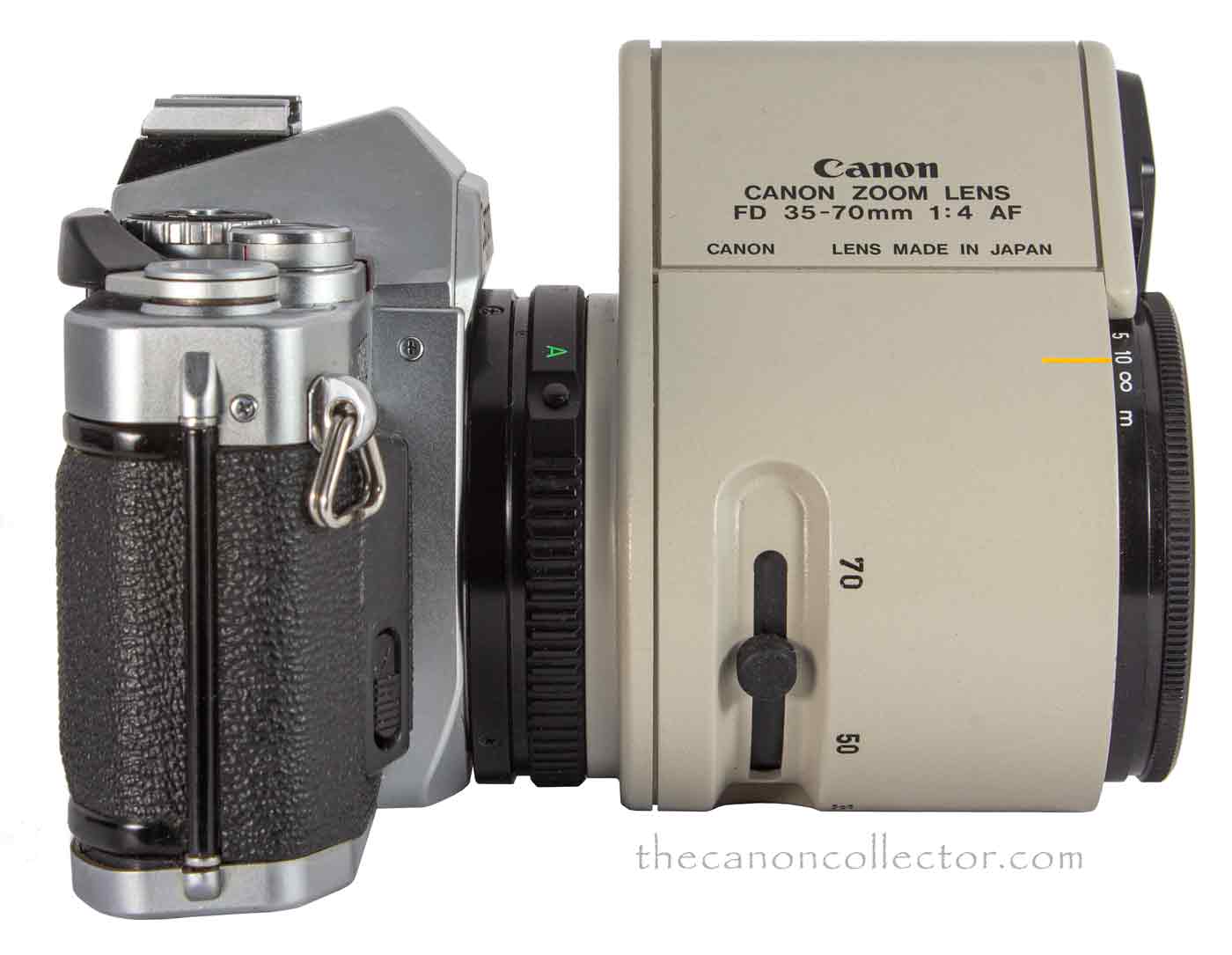 Mounted on the same AV-1, this is the side view. The zoom setting lever is visible on the side of the lens housing. 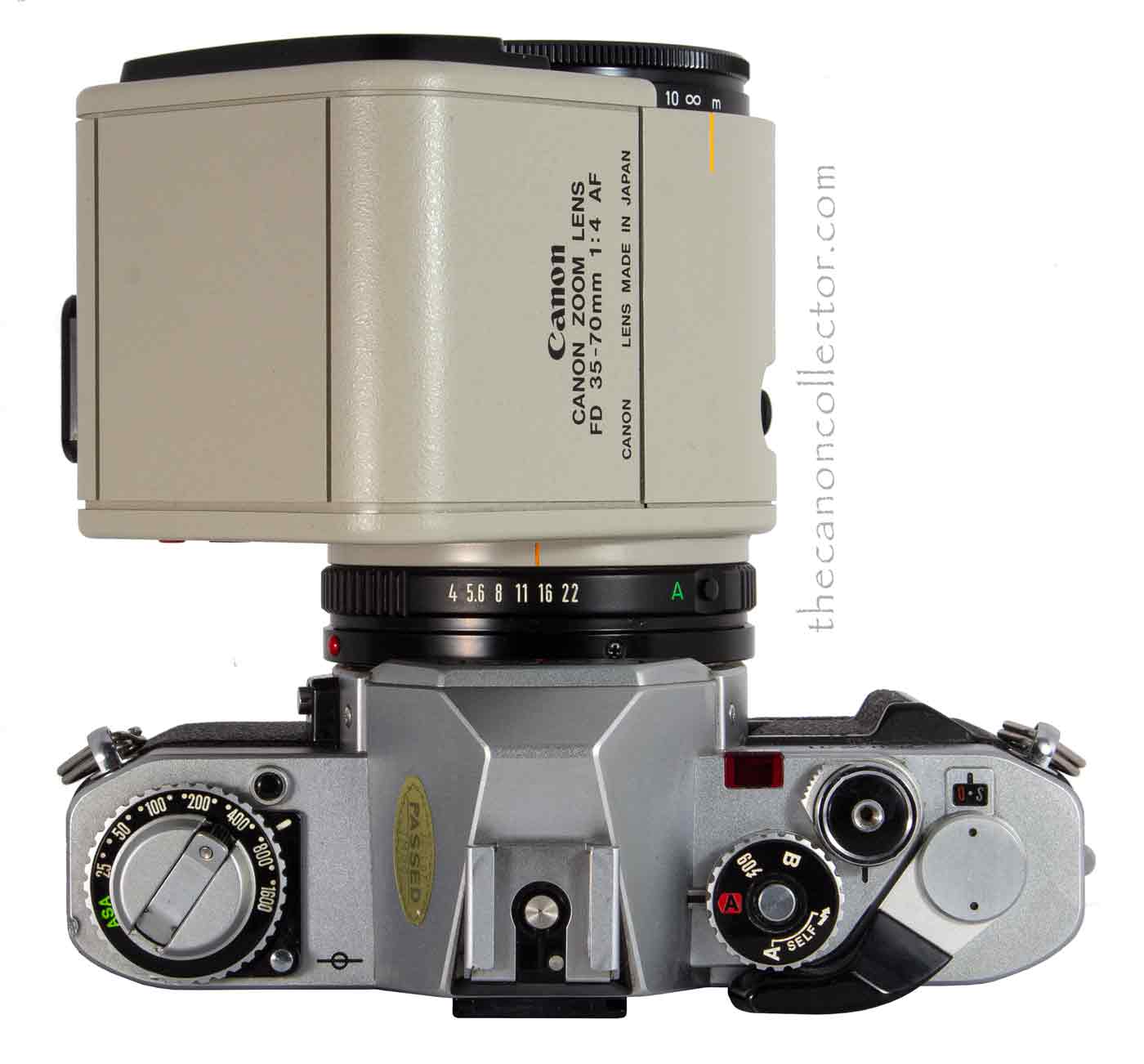 From the top view we can see the f/stop setting ring Like all FDn lenses, this one will operate in auto mode by setting the ring to the green “A”.

The FDn 35-70mm AF will mount and function on any camera with an FD lens mount. It will mount on cameras with an FL mount as well but it may be necessary to use stop down metering. It can also be mounted on Canonflex cameras but the aperture settings may not function and you will be stuck with f/4. 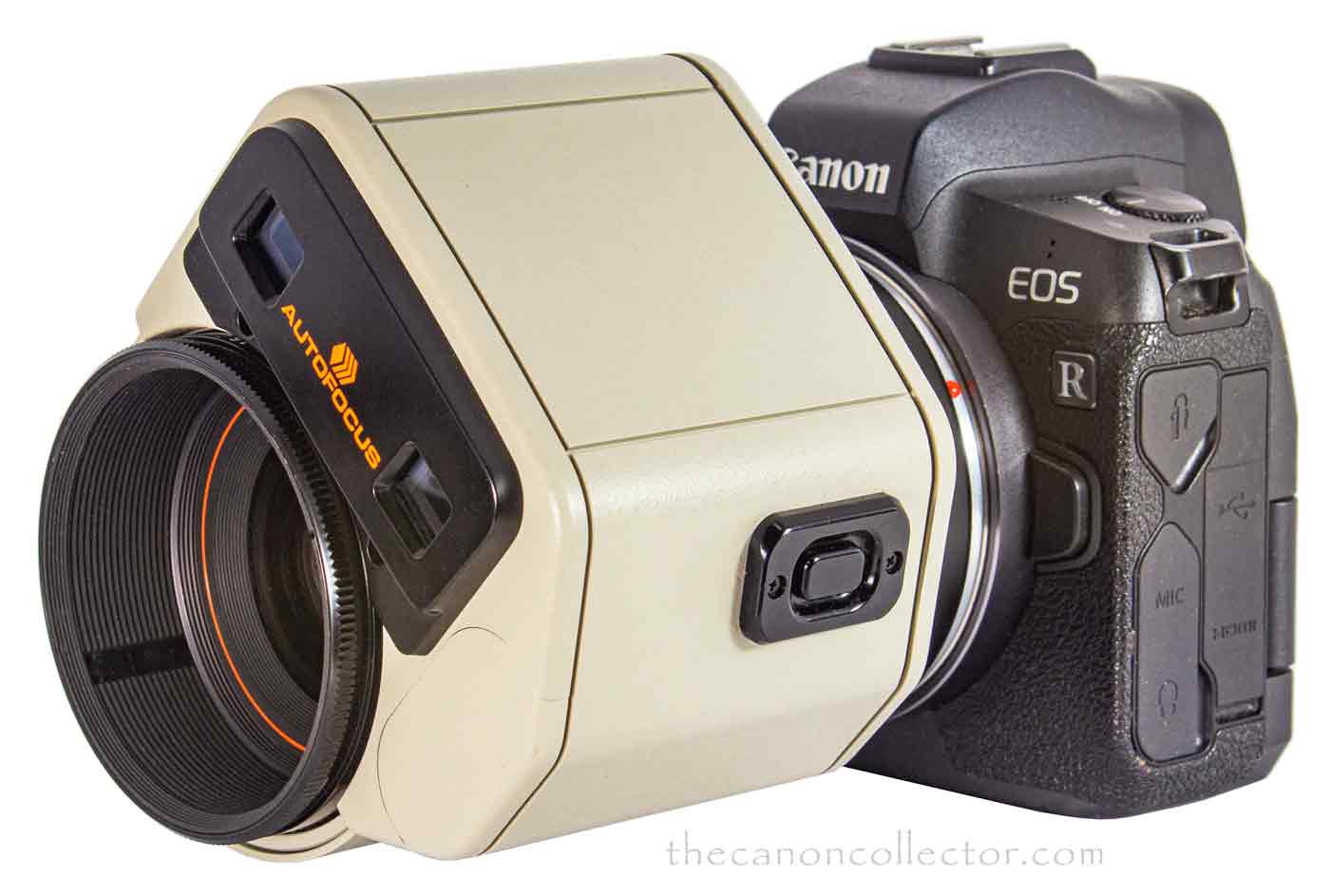 My copy of this lens appears to work so I mounted it on my trusty Canon R and took it for a walk. The first thing I noticed was me worrying that someone would see me with this lens. It is Ugly! But we have to remeber that we should be judging this by the standards of a user in 1979.  If you were a Canon shooter then, you had FD or FDn lenses and none were auto focusing. Then Canon comes out with this lens that will work on any F, A or T series camera and even on the Canonflex’s, sort of. So a little ugly was more acceptable. However, performance might not have been.

I had an advantage over 1979: I had focus peaking on a high resolution digital camera. I could watch what this lens was doing in real time. When I pushed the focus button I could see where it settled the focus. My first outing was on a cloudy rainy day. Contrast was low everywhere and the lens had trouble finding the right settings. Generally it tended to focus past the subject, further into the distance.

On a bright sunny day we had better luck.  But not much better. This lens tends to focus beyond the subject. And occasionally it goes completely wandering off. I could tell because of my focus peaking. But if I had been using, say,  an F-1 I would never know if I was focused accurately. And if I was earning my living with the camera, I could not afford the missed shots.

This lens was an experiment and it was only partially successful. It was capable of taking an accurate shot but with a film camera you would never know when you had the perfect picture. Not until you developed your film.

Now for two examples. This is not about the quality of the lens optically. It is about focus. On my first day out, in the rain I took the two pictures below. In post processing I adjusted contrast and color but not the focus or sharpness. The image on the left is the full frame and the one on the right is the center at 100%. This lens can focus well. But it is inconsistent and in 1979 it would have been frustrating to use.

For Canon’s first try at auto focus it was a good effort. But there was still a long way to go to satisfactory auto focus. 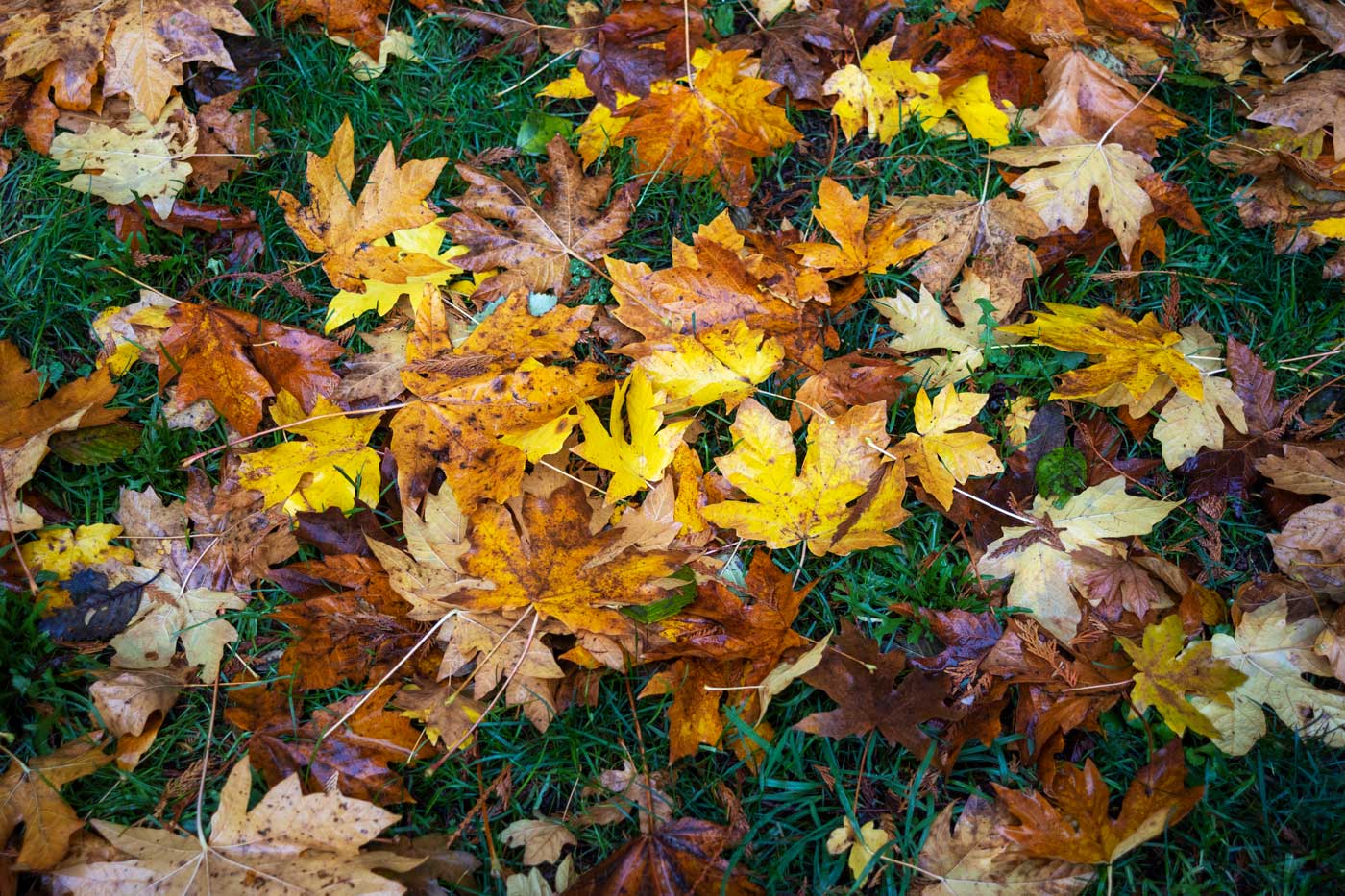 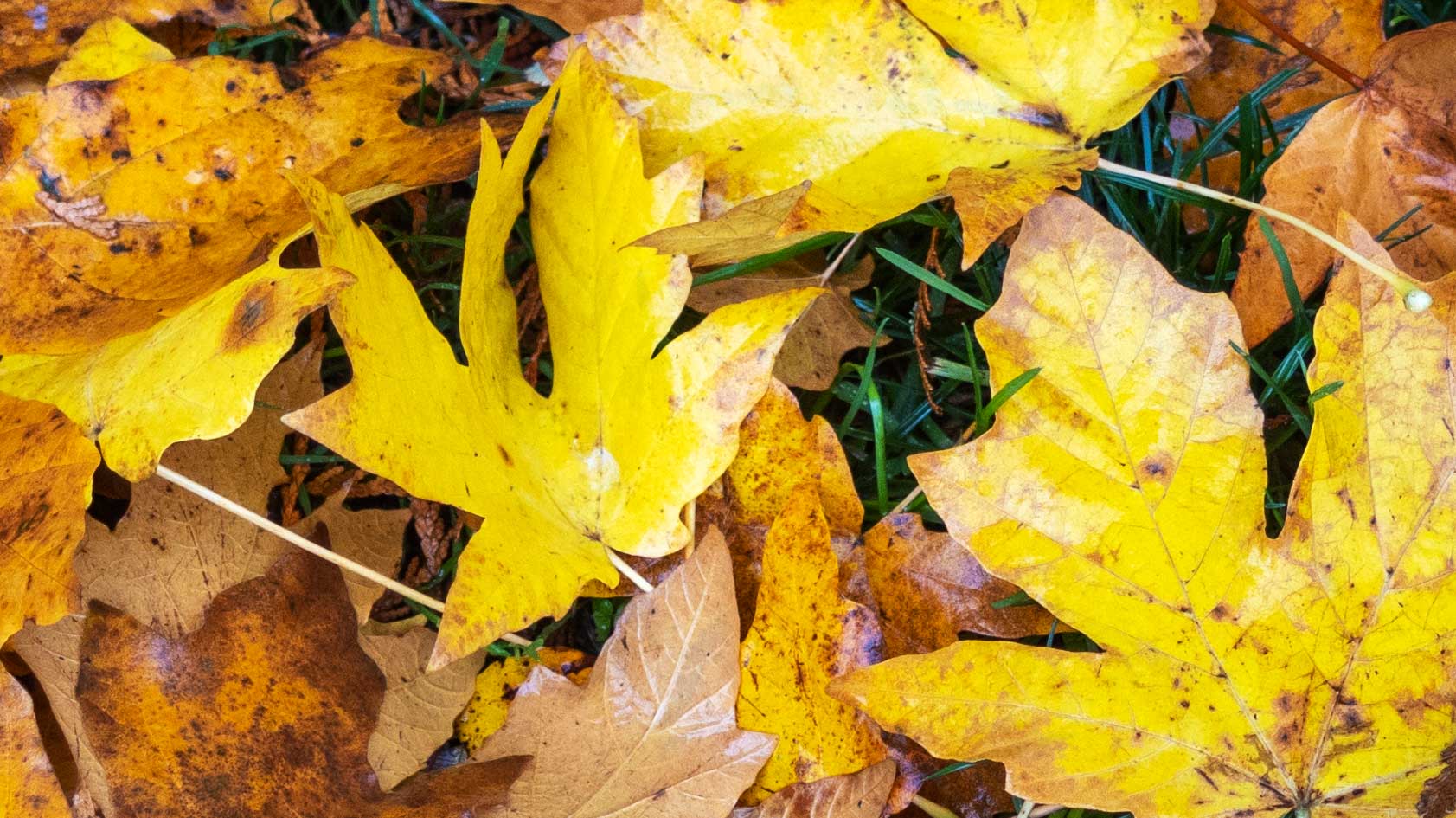 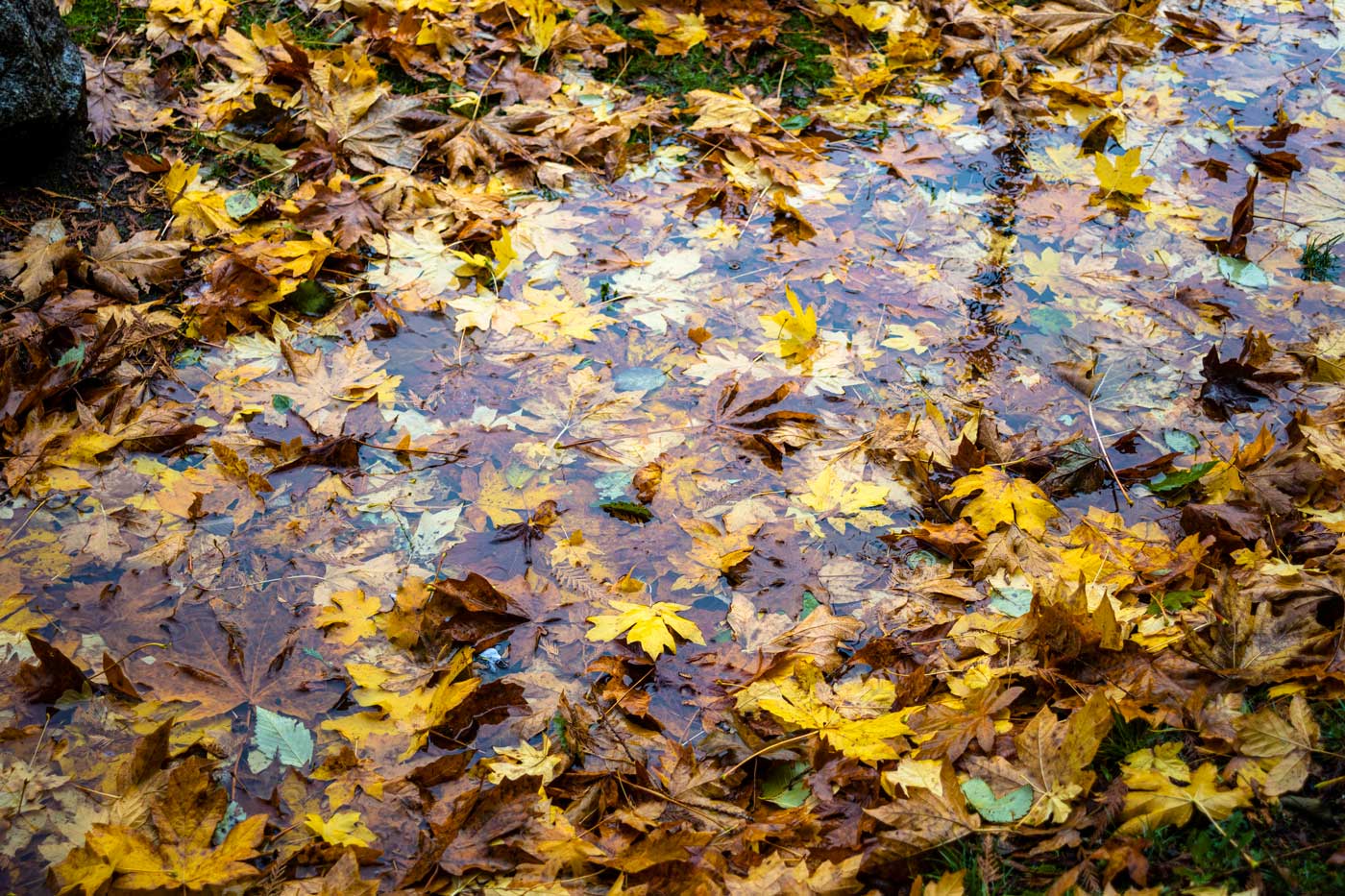 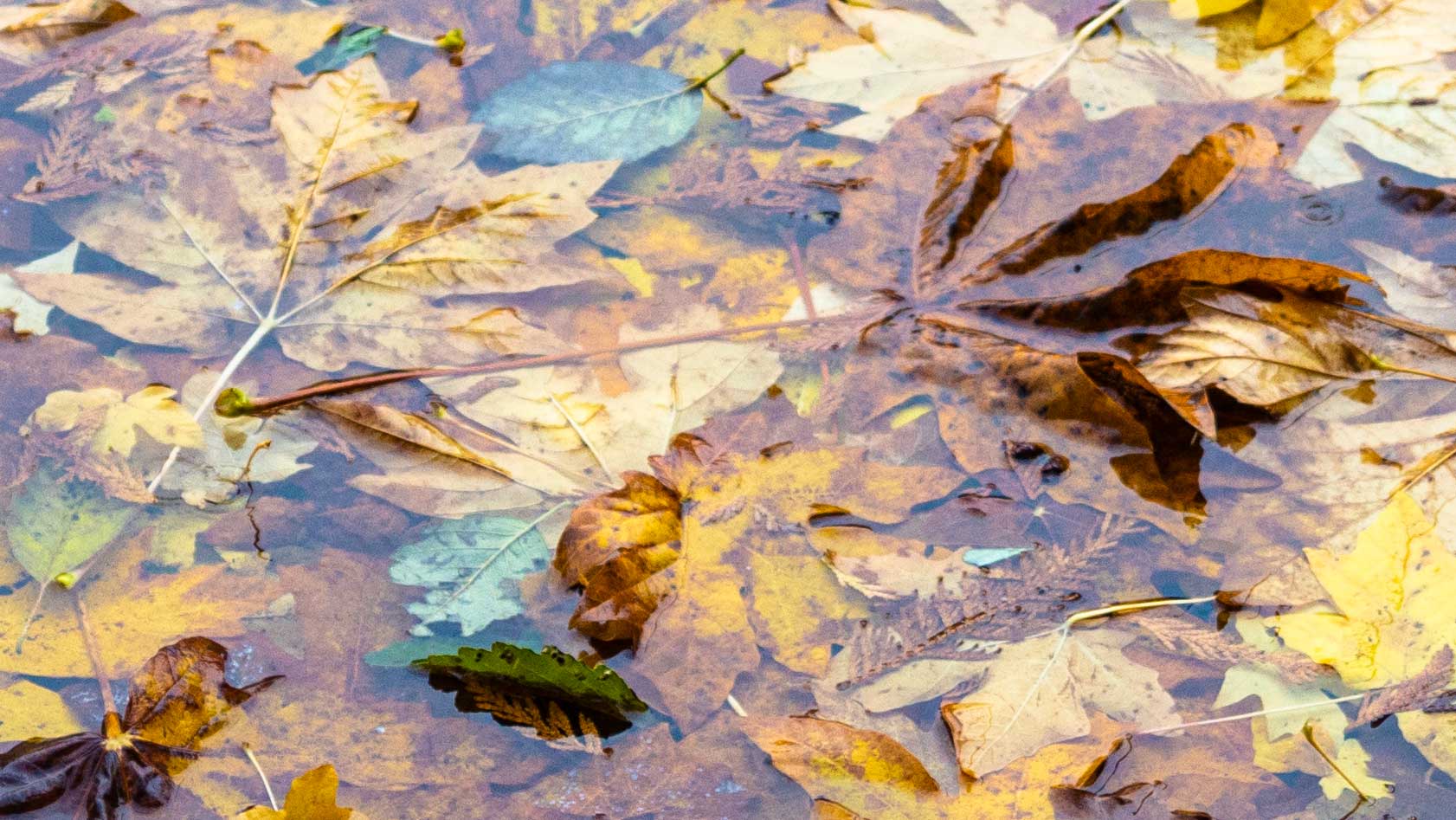