Canon Lights Up your Life 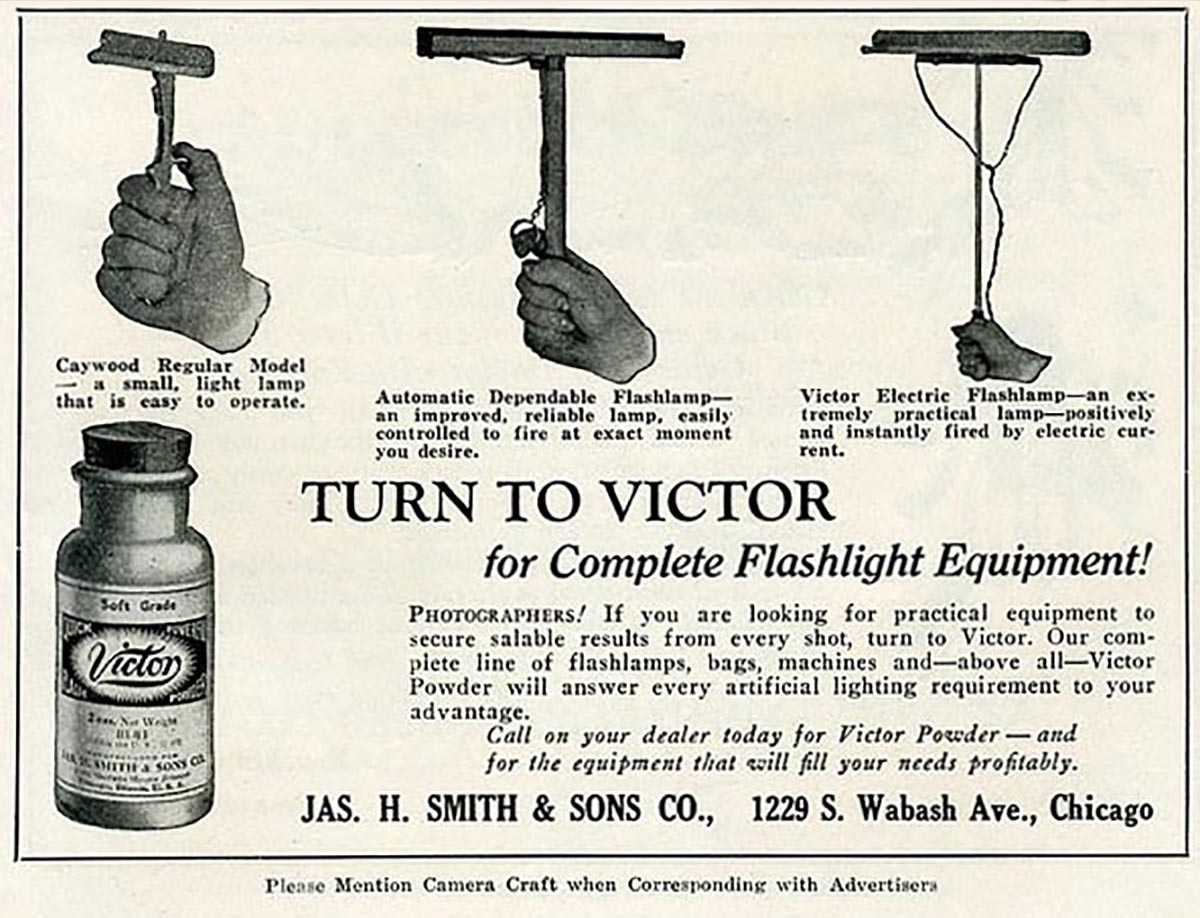 Canon came out with their first flash units in the 1940’s  to enable their cameras to take pictures with a portable artificial light. The first units were pretty crude affairs which relied on flash bulbs. On this page we will look at those units. On another page we’ll look at strobe units.

The Beginnings of Flash

When cameras became a thing in the 1800’s powders that burned brightly had been known for hundreds of years. Black powder used in firearms was one such substance but when not under pressure it burned too slow for use in photography.

It was well known, however, that certain metals, if finely ground and mixed with a source of oxygen, called an oxidizer, would burn brightly and quickly. A common recipe for flash powder was aluminum powder and potassium perchlorate. This mixture can be ignited and it flashes up releasing large amounts of light. This mixed powder was dangerous and care had to be exercised in handling it. On the internet there are discussions about making this mixture. Don’t do it! It can be dangerous.

It was used in a metal trough with a handle. A button on the handle caused a spark which set it off. However, it was prone to all kinds of problems. The amount used controlled the amount of light. While burning the flash powder produced copious amounts of white smoke. It was a serious fire hazard. Uneven light output was obviously a problem. A better way was really needed. 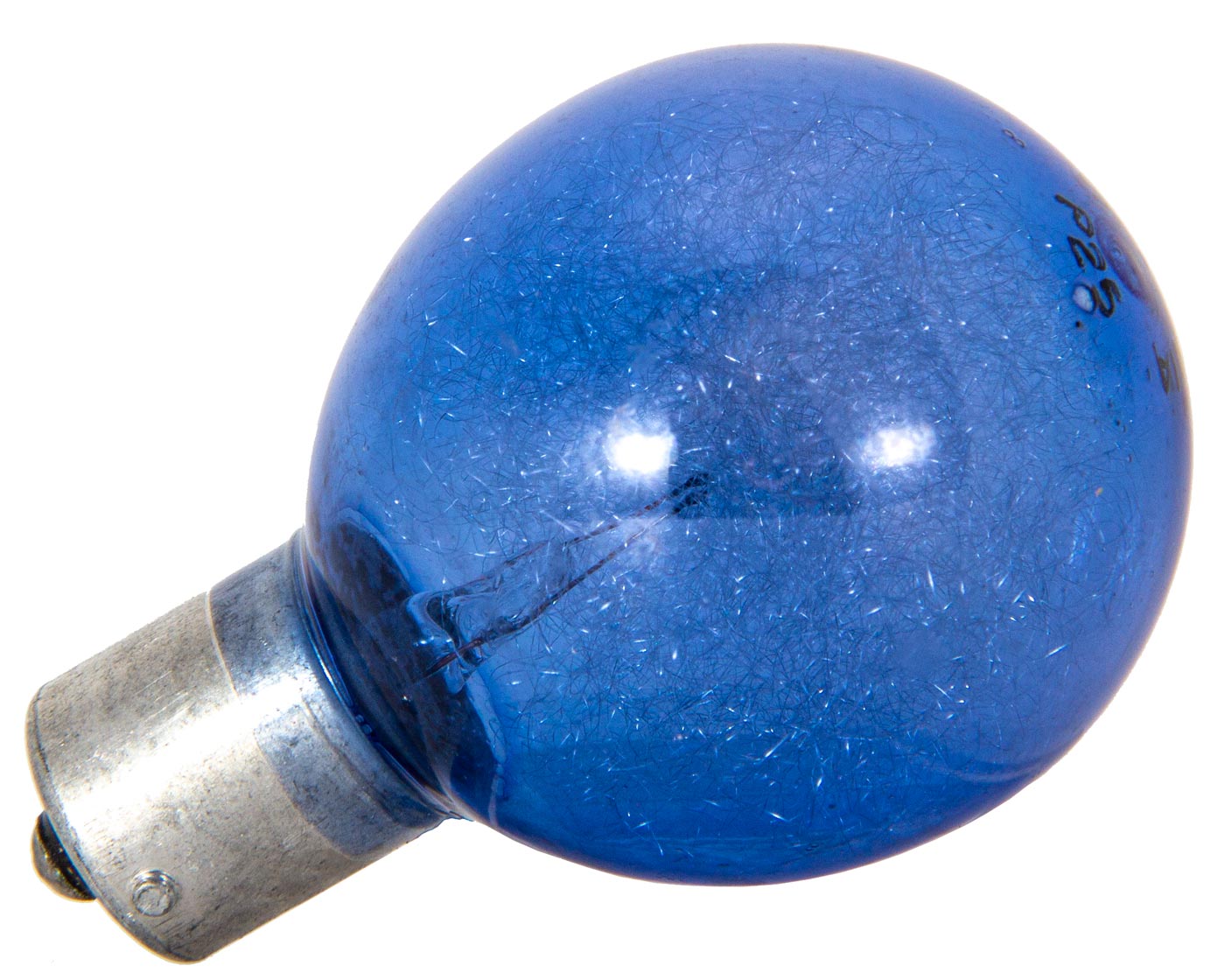 The answer to the flash powder problems was the flash bulb. In the 1890’s people were starting to place magnesium ribbons in glass bulbs full of oxygen. The ribbon was ignited by an electrical impulse. But it was not until the late 1920’s that commercially viable bulbs became available. The first of these were glass bulbs filled with aluminum foil and oxygen. Later bulbs used aluminium, magnesium or zirconium and for better combustion ribbons of metal were replaced by a fine “wool” of the metal.

It was found that the glass bulbs would break or explode when fired and this problem was solved by coating the bulbs with plastic. They were still too hot to handle immediately upon firing.

Because the light comes from burning metal the light is too “red” throwing color balance off. For this reason later bulbs were coated with a blue plastic to bring the color temperature closer to that of daylight.

Bulbs are normally made with negative pressure inside so that the burning gases did not overpressure the bulb and cause a bursting of the bulb on firing. However, if air leaked in the bulb would be more liable to over pressure. For this reason some manufacturers placed a dot of a cobalt mixture in the envelope which appeared as a blue dot. This would turn pink if exposed to air warning the user not to use the bulb.

Over the years several types of bulbs were developed for different circumstances. The more common ones include:

F Type Bulbs – called “Fast Peak” bulbs. When ignited the bulb’s light output rises to a maximum and then trails off. These bulbs peak in about 5 milliseconds (ms) and the peak lasts about 10 ms.

M Type Bulbs – called “Medium Peak” bulbs. These peak at 18 to 20 ms and last 8 to 12 ms. These are intended for leaf shutters. However, can be used with focal plane shutters at slow speeds, i.e. around 1/30th of a second or slower.

As you might expect, cameras have developed various types of synchronization to deal with various flash bulbs and strobes. Below we have a look at the ones you are most likely to run into.

X Sync – is used for electronic flash. The camera is timed to fire the flash as soon as the shutter is completely open. It does not work for some flash bulbs because the bulbs, once fired, take several milliseconds to build up to maximum light output. On most focal plane shutters from the 1940’s though to the digital era the fastest shutter speed during which the shutter is completely open is around 1/30th to 1/60th of a second.

F-Sync – is designed for “fast peak” bulbs. It has a firing delay of about five seconds to allow the bulb to reach peak output and then it opens the shutter fully. This means shutter speed on a focal plane shutter cannot exceed about 1/60th of a second.

M Sync – is an obsolete system found on older cameras. It is suitable for medium-speed flash bulbs. This setting fires the flash bulb slightly ahead of the shutter opening so it corresponds with maximum light output from the bulb.

FP Sync – is the sync system for FP Type flash bulbs. The longer duration of the flash allows time for the shutter curtains to cross the film plane with a travelling slit which allows for film speeds above the 1/60th limit imposed by the need for a fully open shutter.

B-Sync – is not really a synchronization but it is a means of using the flash. To use this you set the camera on “B” which will open the shutter and keep it open as long as the shutter button is held down. Then you can open the shutter, fire the flash manually, and then let the button go. It works but it is not often you want to use this method.

The camera closes electrical contacts with the camera but it is the flash unit that supplies the battery power. For this to work the flash must be electrically connected to the camera. The pricipal methods are through a PC Socket or a “Hot Shoe”. Canon rangefinder cameras also use a device called a “side rail” and some used a “Flash Unit Connector Socket”. Lets have a look at these. 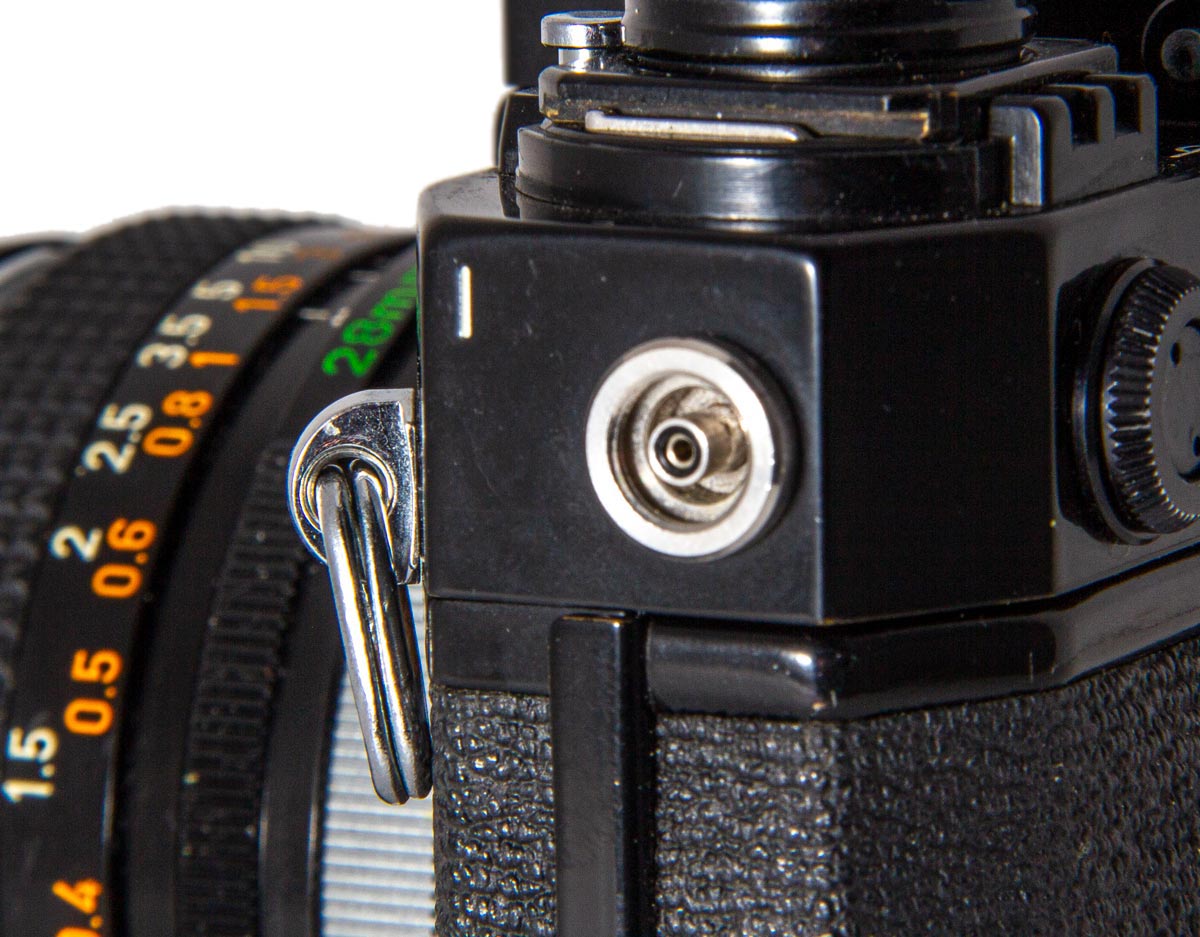 PC Socket – this is an old and almost universal standard on older cameras and actually came to have an ISO definition. PC is short for Prontor/Compur which were two German companies in the 1950’s who developed the connection. The corresponding plug is attached to the flash unit by a thin coaxial cable.

The PC Plug is not specific to any flash or camera. It is simply a connector between flash and camera. How any camera or flash functions will be found in their respective User Manuals.

On the left is an image of the PC socket on the end of a Canon F-1 which did not have a hot shoe or other flash unit connector. 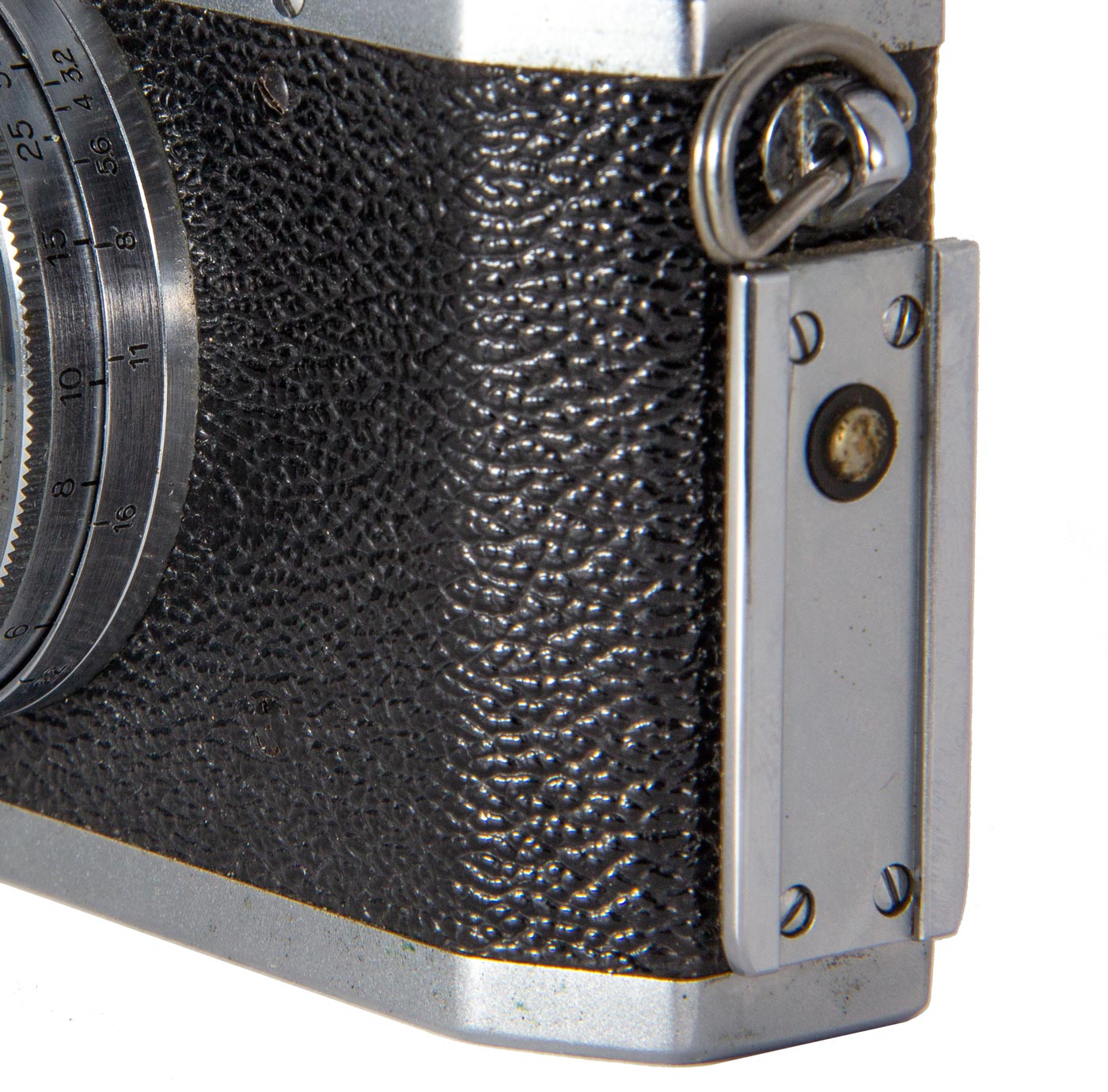 Canon Side Rail – was the Canon rangefinders answer to the Hot Shoe. It was a rail attached to the left end of the camera body with an electrical contact embeded in it. The fash unit would slide down over the rail and the electical contacts on the unit would make contact with the contact in the rail. It worked exactly the same as a hot shoe. Why Canon did not simply use a Hot Shoe I don’t know.  Did they not think of it or was there a patent problem. At this point I don’t know. All that aside, it was a solid attach point and it held the flash firmly.

On the left is the left end of a Canon Model II F rangefinder camera showing the side rail flash unit attach point. The electrical contact is visible in the rail above the center point. 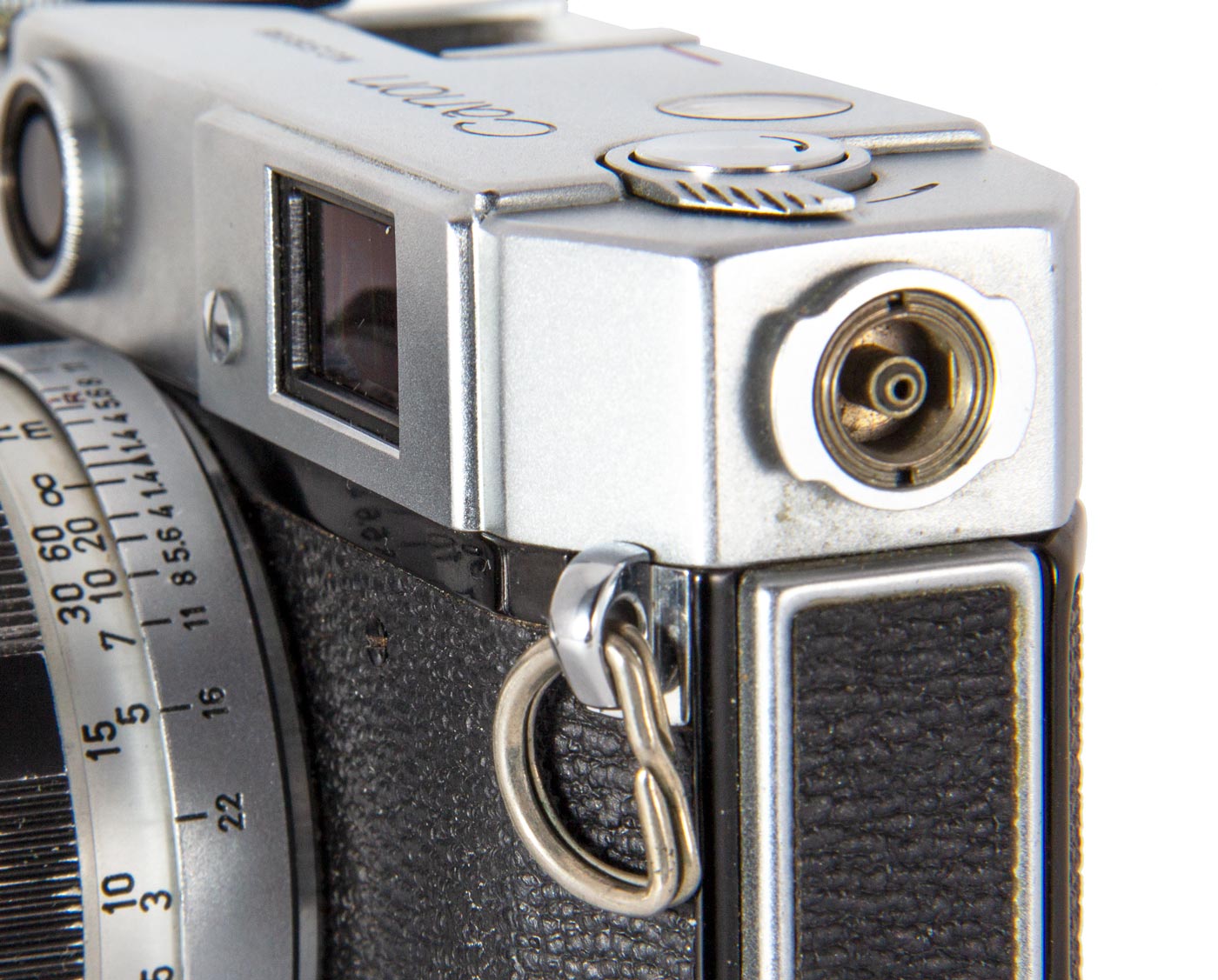 Flash Unit Connector Socket – was introduced on the Canon Model VT in 1956. It was basically a PC Socket in the middle of a bayonet mount into which a flash unit could lock. This flash attach point continued through to the F-1

On the left is the left end of a Canon Model VT rangefinder camera with the new Flash Unit Connector Socket. The similarity of the center connector to a PC  Socket is obvious. 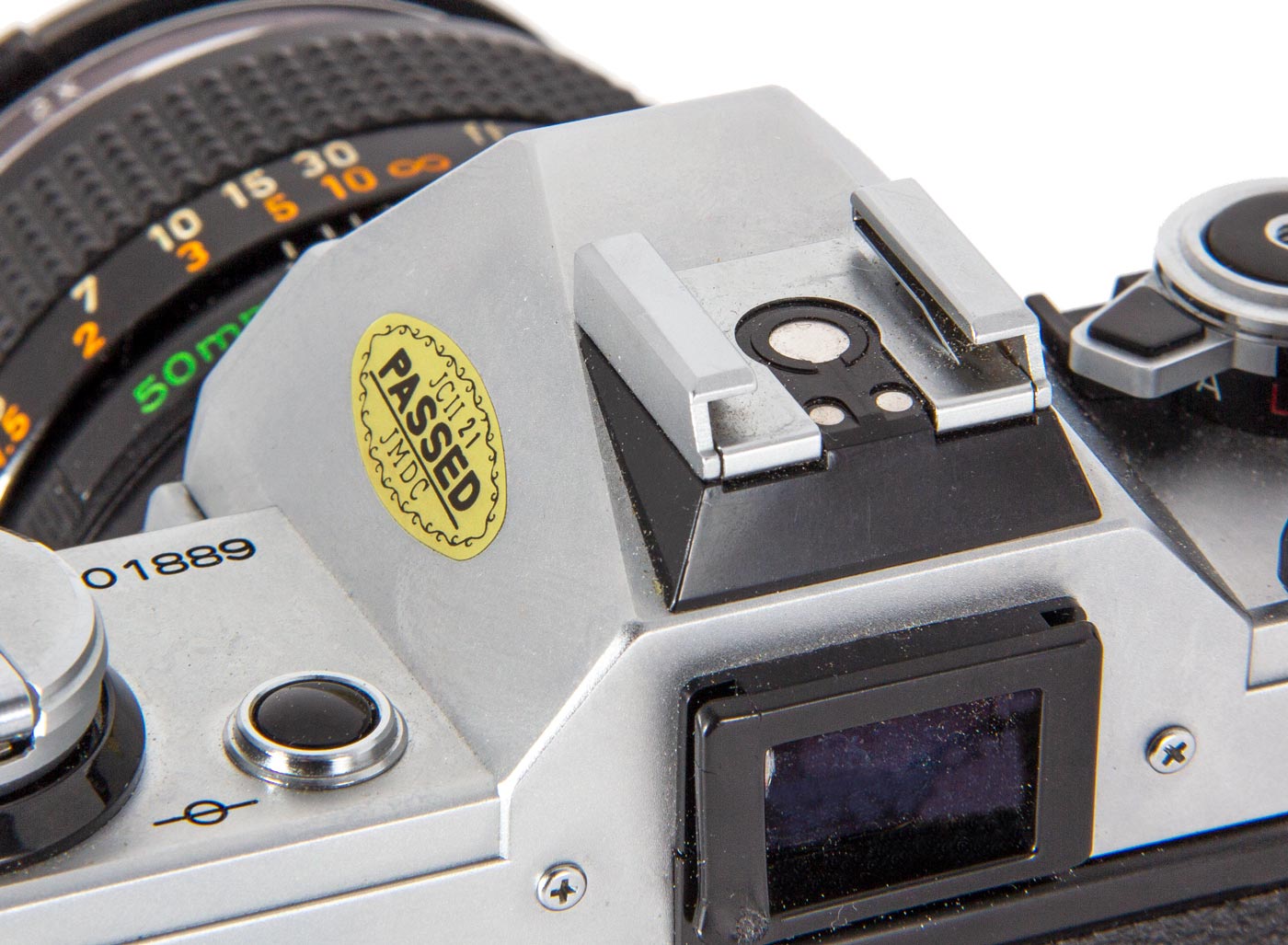 The Hot Shoe – is seen here mounted on top of the prism on a Canon AE-1. The two small circles and one large circle are the electrical contact points for the flash unit.

The hot shoe in this form has become the standard attach point for the flash unit and on professional cameras has become vital for the programable radio transmitter of our own day. My Canon R has a hot shoe but I have never attached a flash to it. It always has a radio trigger there.

On the left is the Hot Shoe on top of a Canon AE-1.

Flash unit Guide Number is an attempt to create an absolute way of talking about the output of a flash unit or particular flash bulb. It is derived by multiplying the distance between flash and subject by the f/stop on the camera for a perfect exposure.

It is usually used to determine the correct f/stop by dividing the Guide Number by the distance. However, looking at it you quickly realize that this is all dependent on film speed and shutter speed can enter into it as well. Frequently manufacturers will use a standard ISO of 100 and distance of 10 feet. Read the instructions for the camera and the flash unit for full instructions.

Guide Numbers were introduced by General Electric in 1939 with the introduction of their GE #5 flash bulb. They have largely fallen out of favour with automatic flash and the advent of light meters that can read incident flash light levels.

If you are serious about your photography a knowledge of the principals involved is a good idea.

In this discussion I am refering to Flash Units as devices for using flash bulbs. For electronic flashes I will ceate another page and I will refer to them as Electronic Flashes, or Strobes, or Speedlites. So what Flash Units did Canon create? Here is a list of the ones I have been able to identify and, again, the ones I have are indicated in blue.

This short introduction only skims the surface of this subject. However, by reading the manuals for cameras of the era you are interested in you will ususally find the details you need to successfully take pictures with a flash unit. These units seldom work now when you find them. There are two reasons: the first is the capacitors they use have long since died and the second is the batteries are long since expired, and, if you are lucky, have been removed from the device. Often they are of a type not generally available today.

I describe several of the old flash units I have acquired. I have tried none of them and have no desire to. Once you have used an electronic flash it is hard to go back.