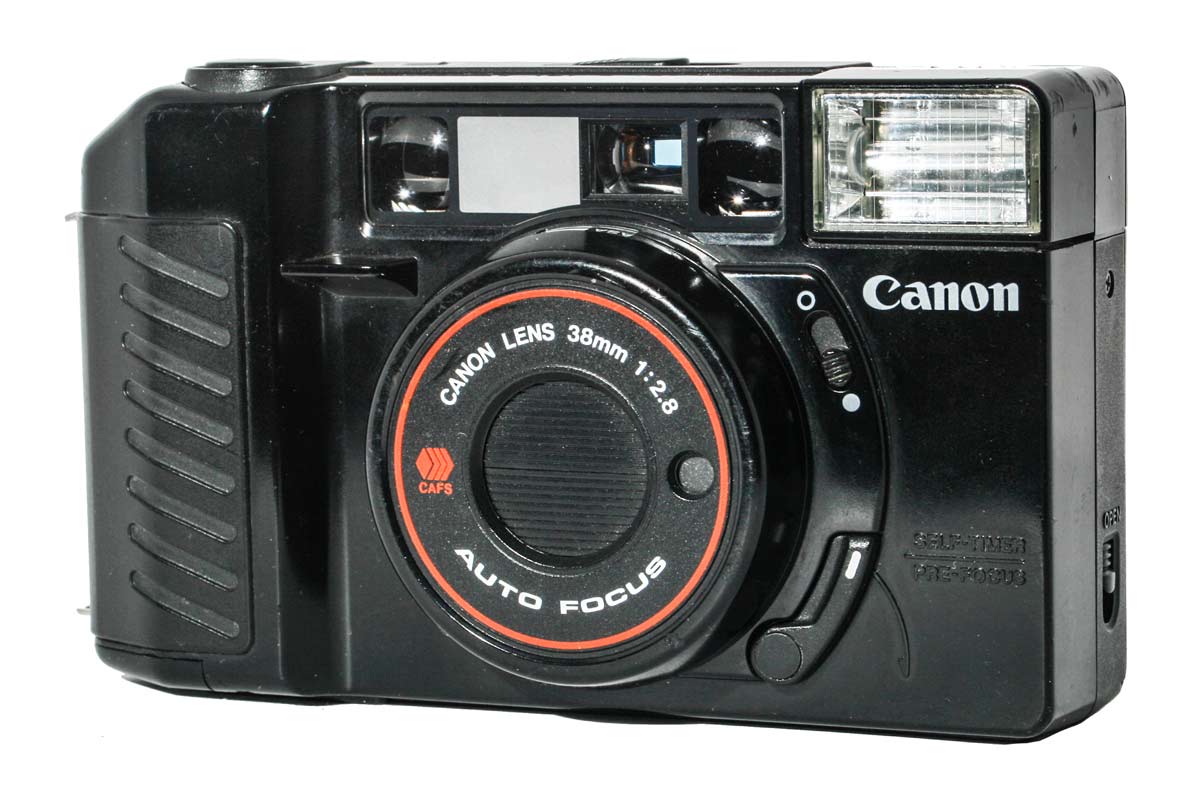 This is the New Sure Shot in its normal “Off” state with the lens cover closed and flash retracted.

At first I was confused identifying this camera because on the top it is designated as the “Sure Shot”. However, close examination of the cameras in the Canon Museum identified this as the New Sure Shot, otherwise known as the AF35M II or Autoboy 2.

This is a solid little camera. Made of plastic it is far heavier and more substantial than it looks. It feels like a quality product. By today’s standards the exposure and focus may be a bit primitive but when this camera was introduced, April of 1983, the digital revolution was still years away and automatic self focusing cameras in the consumer price range were new. 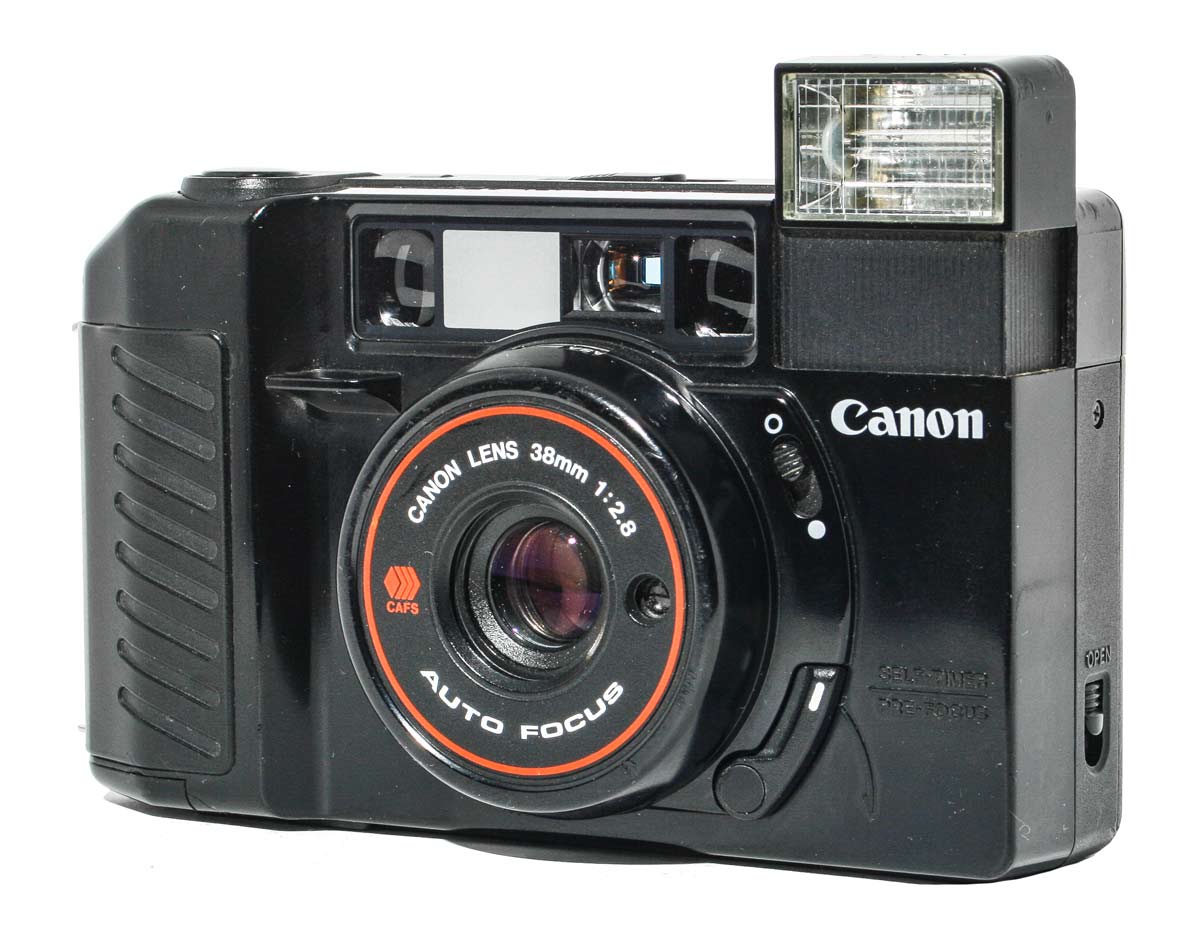 The small switch at top of lens housing just to the right in the picture opens the lens and turns camera on. If you select the flash it pops up as shown here.

The top of the camera is uncluttered. In the center is the rewind switch, to the right the film counter and in the top right is the shutter release button. 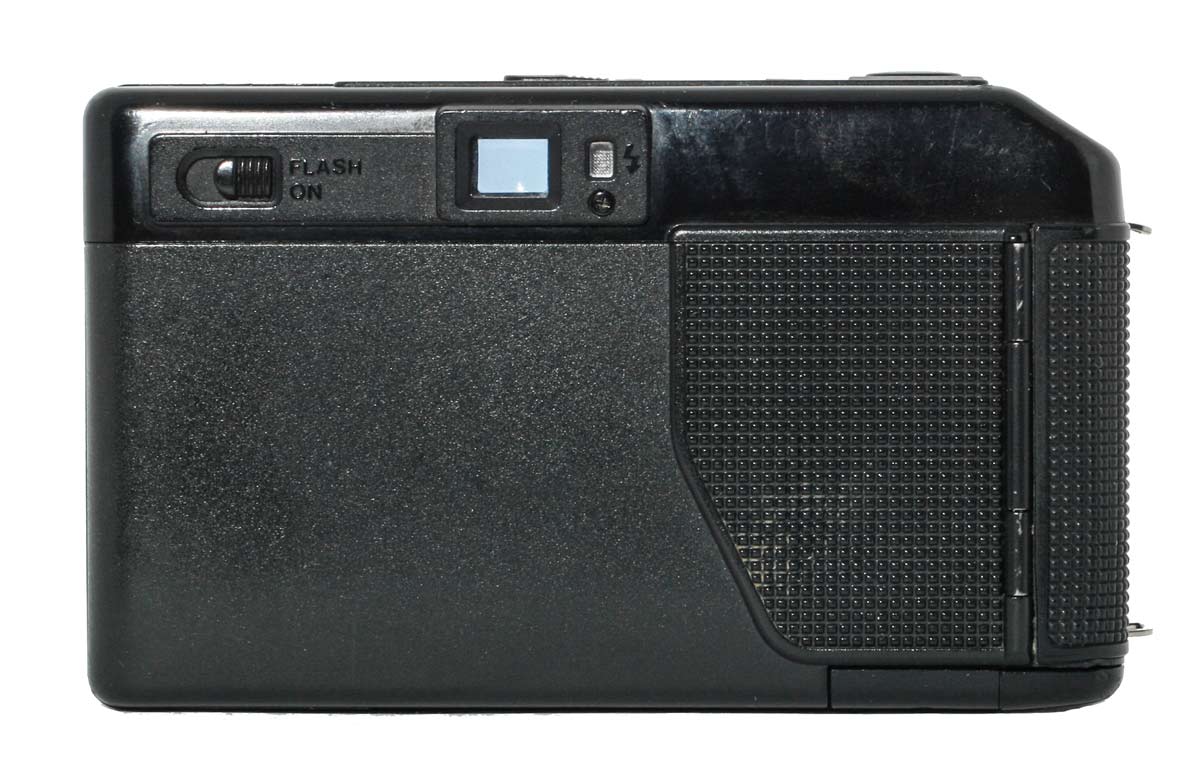 On the back is the  flash selector switch in the upper left corner.

The New Sure Shot replaced the original Sure Shot and the Super Sure Shot making it the third in the series.

It is a full 35mm frame camera with a non-zoom 38mm f/2.8 lens. It is a fully automatic camera that sets exposure and shutter speed. In fact there is no ability to set this camera manually. About the only thing you get to set is the film speed somewhere between 50 and 1000.

The auto focus is based on an infra red light emitting diode which sends out  a beam of infra red light that the camera then uses to focus on. This means that focus is largely independent of ambient light levels. The system can be fooled, however, by glass if shooting through it.

The built in flash is always visible but to use it it pops up. Guide number at ASA 100 is 13 (using meters). Of course this information is pointless as there is no way to control the flash.

Film advance and rewind is automatic in both directions although somewhat noisy.

But, having said all of that, shooting it is fun if you like to tinker with cameras. There is a lot to get used to but it is all easy stuff to learn. After taking several shots, the camera becomes transparent and you can concentrate on your photography without distraction.

Is it perfect? Absolutely not. But it was not designed to be. It was always intended as a snapshot camera producing small  4 x 6 images. In that roll, it performs admirably.

Internally there are no surprises. Loading film is simplified by a Quick Load System that works really well. Simply lay the film leader across the film guides to the red marks and close the back. 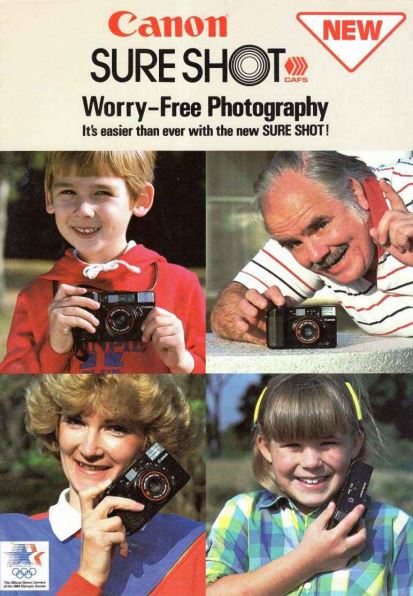 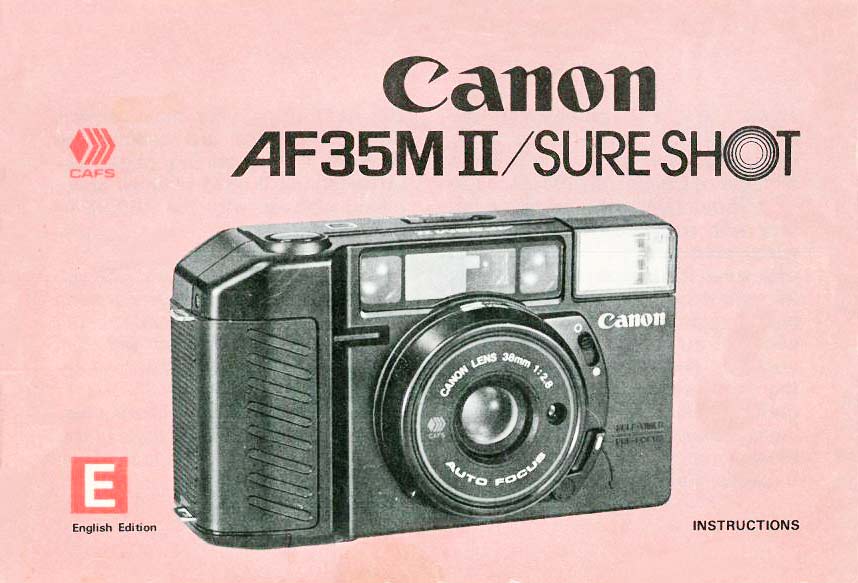