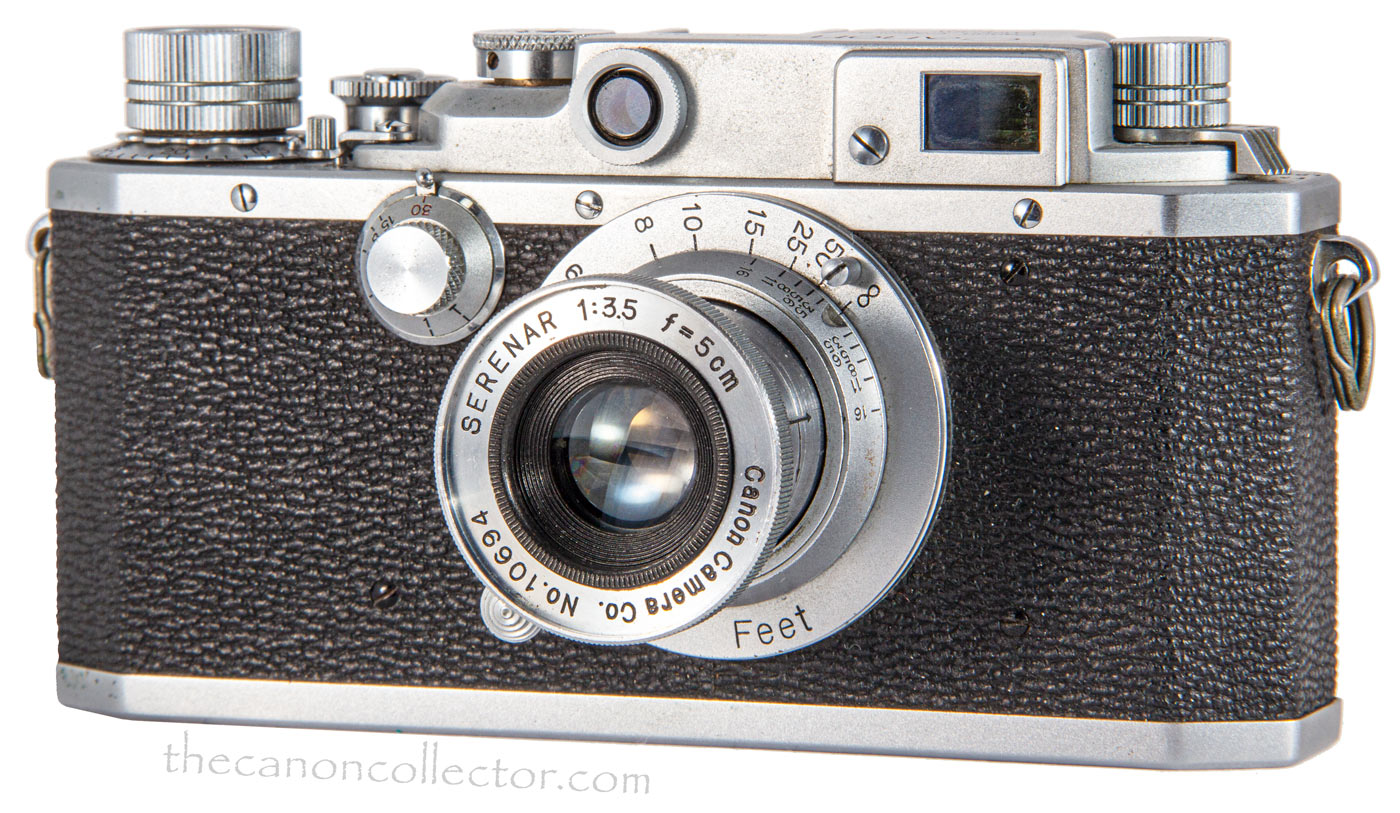 This is my Type 4  50mm f/3.5 collapsible  lens mounted on a Model IID 2. The lens is in the extended position. 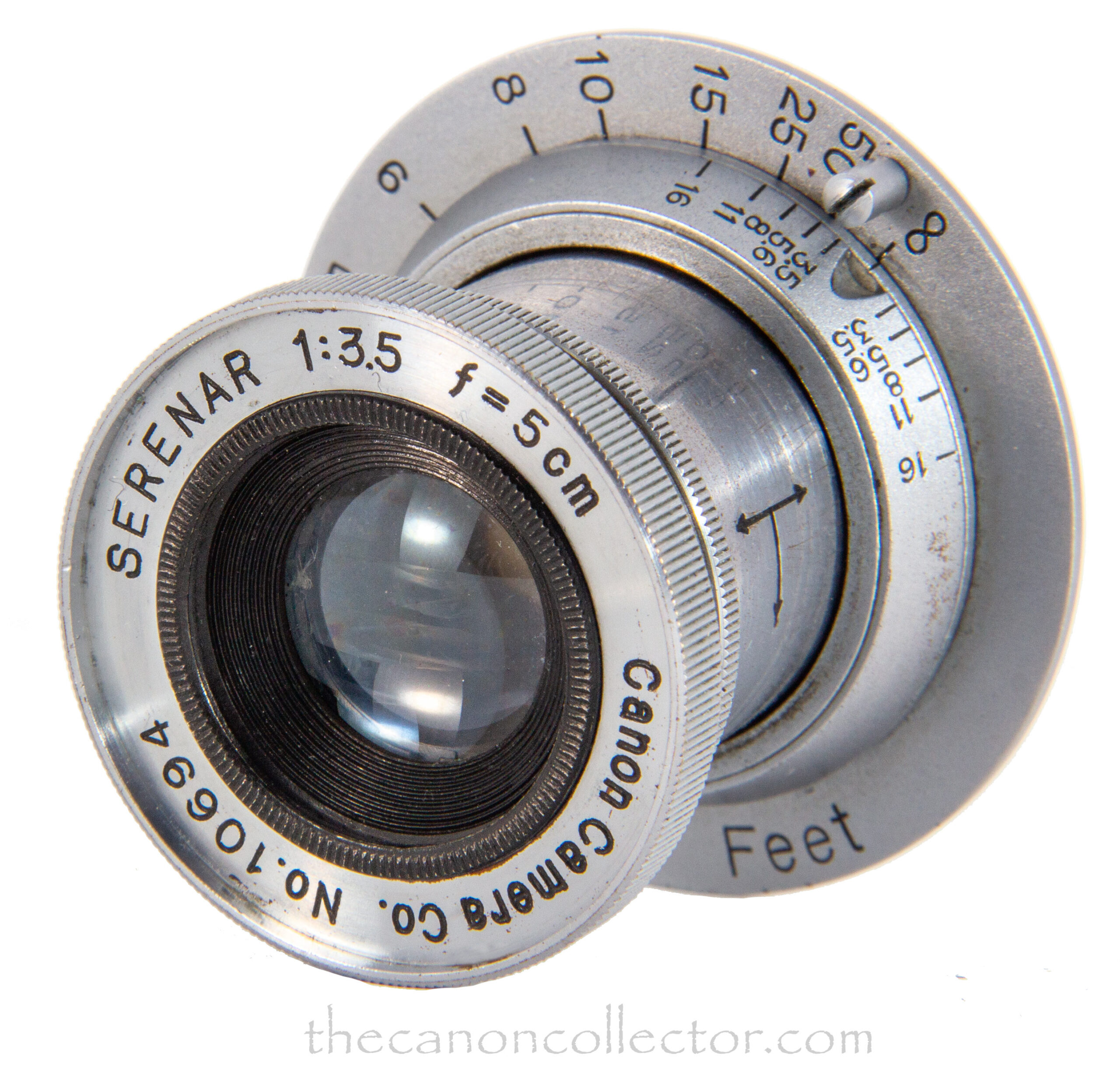 The Type 4 lens was the first model of this lens to carry the Canon name after the Company name change in September of 1947.

The 50mm f/3.5 collapsible lens that Canon made for its rangefinder cameras is historically a very significant lens. It was the first lens Canon made in “in house” and offered for sale commercially. First produced in December of 1945 it remained in production through eight variations, according to Kitchingman, and finally being supplanted by other lenses in February of 1955.

made the lenses for the earliest Canon cameras. During the war Canon began to create a lens making ability but their very first lenses were probably experimental. Unfortunately records from this period are very incomplete and there is a great deal of conjecture here.

Canon trademarked the name “Serenar” for its lenses in December of 1941 when the name of the company was still Seiki Kogaku. So when the first lens Canon produced, the 50mm f/3.5 collapsible, came out at the end of 1945 it was marked “Seiki-Kogaku” and “Serenar”.

Kitchingman notes three models of this lens bearing the name Seiki-Kogaku before the company changed its name to Canon in September of 1947 and the name rings on the lenses were changed. The fourth model of the lens was the first to bear the Canon name. It was 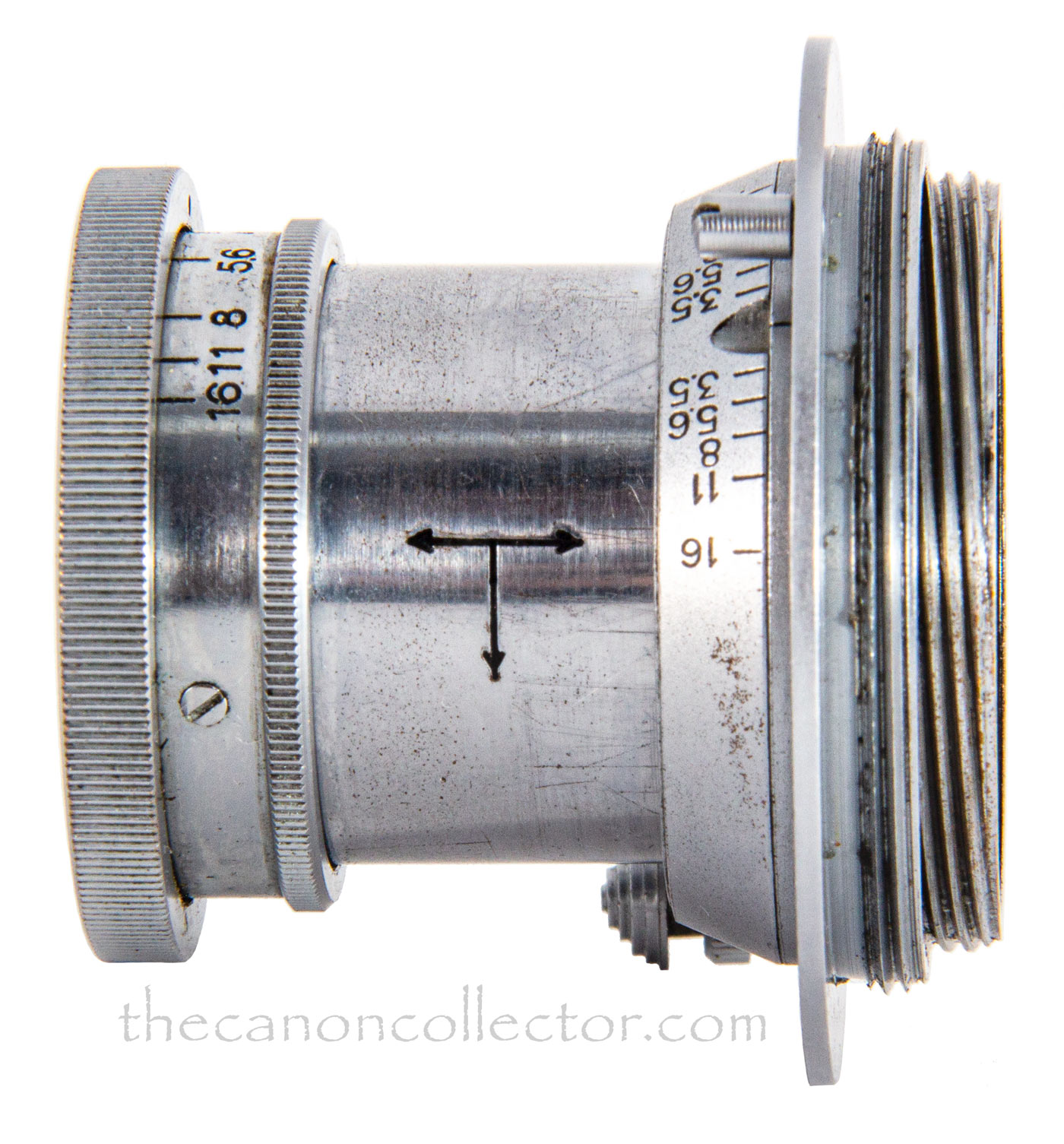 As far as can be determined the original version of this lens was designed by Furukawa Ryouzou who was a Nippon Kogaku (Nikon) texhnician who came over to Seiki-Kogaku in 1939. 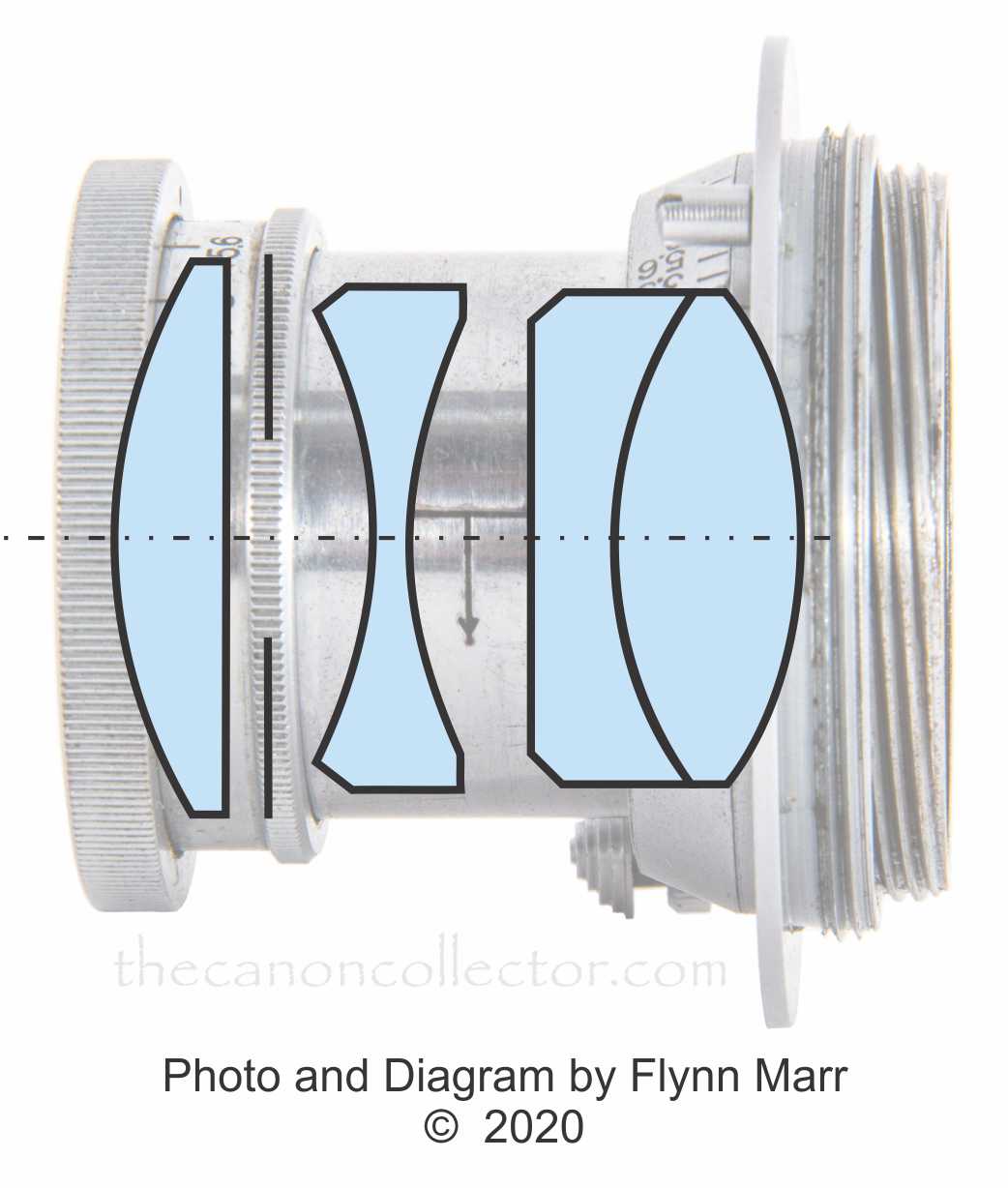 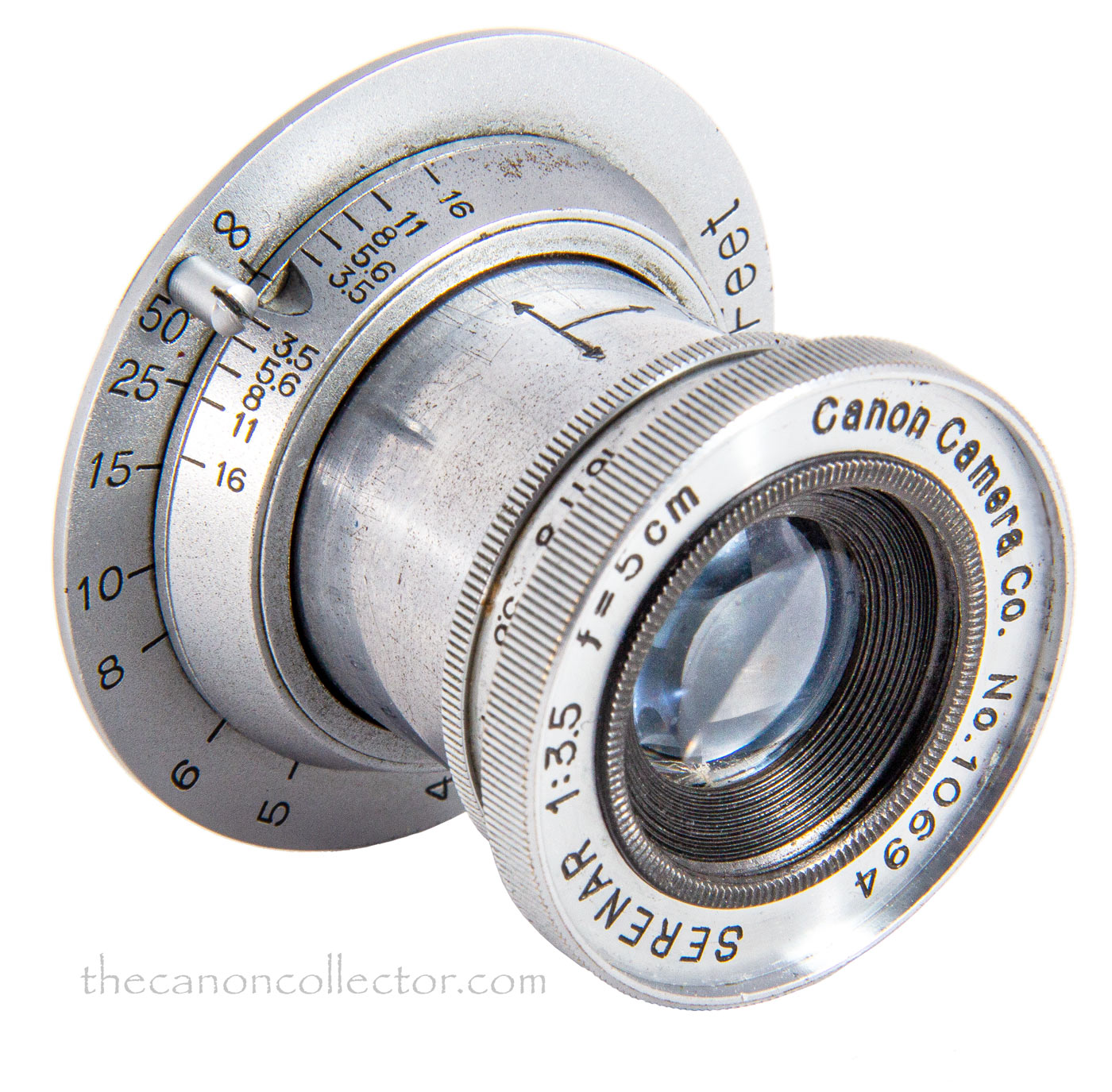 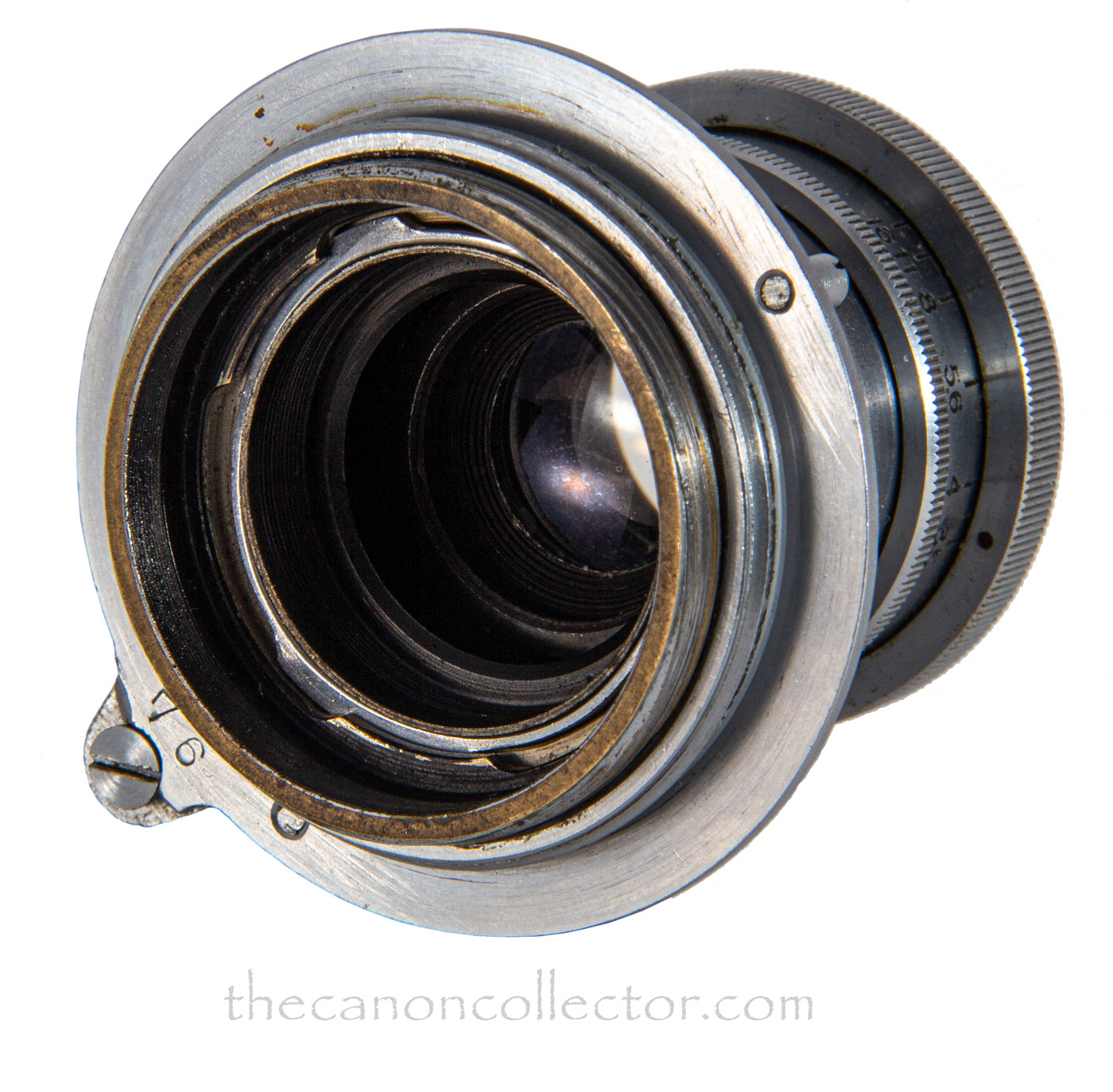 Let’s stop for a moment and take a look at the precursor to the Canon 50mm f/3.5 lens. I know there are those that say Canon did not copy Leitz and I don’t want to descend into that argument. So lets say that we are going to look at where Canon got its “inspiration” for its lens.

The Elmar 50mm f/3.5 Collapsible lens by Leitz. Look familiar? Iris setting is by moving the small tab on the front of the lens. Image is from Ken Rockwell’s website.

This is the structure of the Elmar lens which should look familiar!

When Barnack was first working on his 35mm camera, as early as 1910, he was creating a new film format and camera size. There was no stock of lenses he could chose ‘off the shelf’ for his new camera. He had to come up with a suitable lens specifically for his project. To do this he turned to Max Berek, a mathematician and physicist working at Leitz, for help.

Berek came up with a design for a 5 element lens with a cemented rear triplet. It was a variation on the Cooke Triplet which was a well known design of the time. This first lens, which they called the ‘Elmax’, was actually produced and appeared permanently affixed on the initial Leica 1 cameras that came out in 1925.

Advances in optical glass allowed for a redesign of the Elmax which eliminated one lens element resulting in a 4 element design with a cemented rear doublet. This they called the ‘Elmar’. It was a 50mm lens with an aperture of f/3.5. It replaced the Elmax on the original Leicas where it was also permanently affixed to the camera.

This is the lens that launched the 35mm format. It was the first interchangeable lens on a 35mm camera. It was manufactured from 1925 thru 1961 by Leitz who made an estimated 350,000 of them. It is an extremely important part of photographic history.

The original Elmars, from 1925 thru 1930 were not collapsible and permanently affixed to their cameras. They were then set in a classic M-39 screw mount that could collapse into the camera body. Eventually they were mounted in bayonet mounts for the M Series Leica cameras.

The Leica camera was so successful for Leitz that many companies produced their own version of the Leica and actual counterfeit copies are not uncommon. The difference is that most companies put their own names on them but some people created copies that actually had the Leica name on them so they looked like actual Leitz cameras. The Elmar was frequently copied as well, especially in Russia and Japan, and can frequently be found today on E-bay. The buyer should be careful as they often carry the Leitz and Elmar name and are offered as original Leitz products. 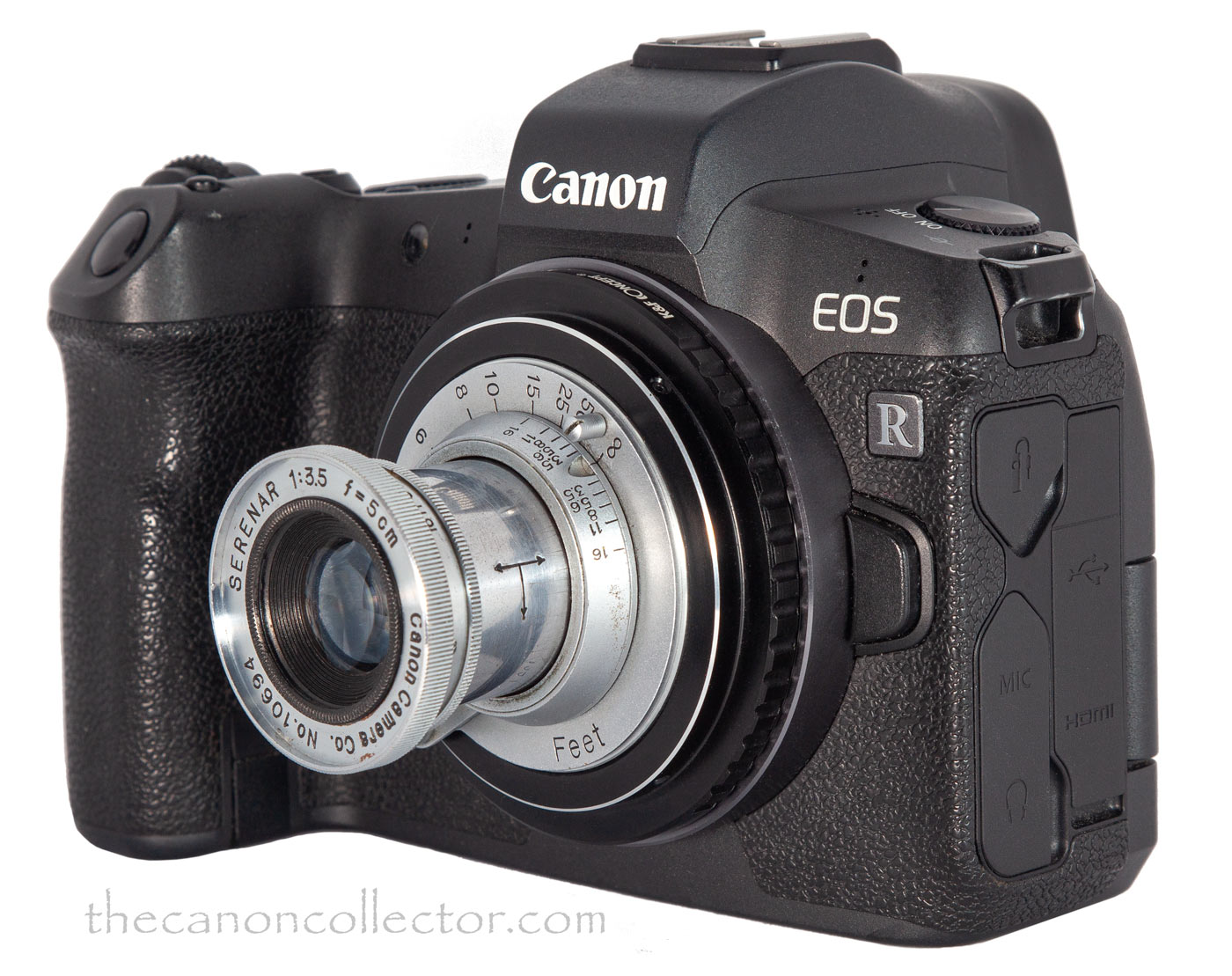 This is my R 50mm f/3.5 collapsible Serenar mounted on my Canon R using an M-39 to EOS R adapter by K&F Concept. Because the camera does not recognize the adapter it is set to fire without any lens at all. Then the camera is set to Av mode. To use it you set the aperture and let the camera chose the shutter speed. Focusing and setting the aperture is awkard as I explain in the text on the right.

So, How does it Shoot?

We have to remember that we are asking this question of a lens that was designed in the mid 1920’s and then copied by a company struggling in the midst of the chaos and ruin of the Second World War. How would you think it functions? Well, actually, it is pretty good.

To see just how good this lens is I mounted it on my Canon R. Now the lens was intended for 35mm film which is, at best, around 12 mpx. Don’t forget that in what follows. The Canon R is around 30 mpx which will really put the 50mm f/3.5 to the test.

The first thing you will notice is that the lens must be stopped down manually and for best focus should be wide open. That means focusing at f/3.5 and then stopping down to the desired aperture. This is annoying but on a rangefinder camera it is not an issue as you have a viewfinder that does not look through the lens.

Second thing I ran up against is that the “infinity lock” tab interfered with the lens adapter which prevented focusing to infinity. This problem was overcome by removing the Lock Pin from the tab temporarily for the test. 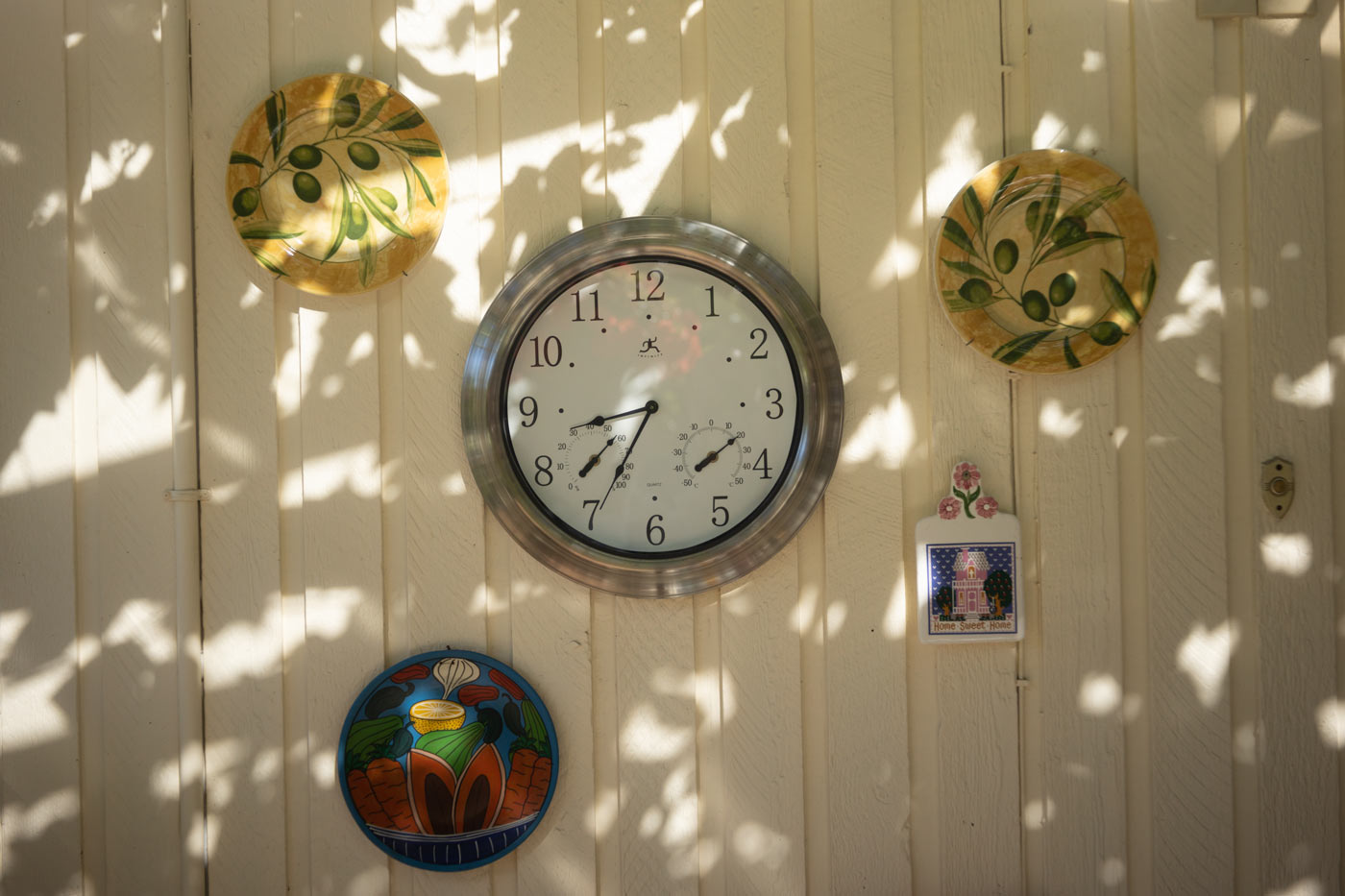 This is a full frame at f/3.5 withut any adjustments. This lens is a little soft but notice that it has almost no vignetting which I did expect to see. 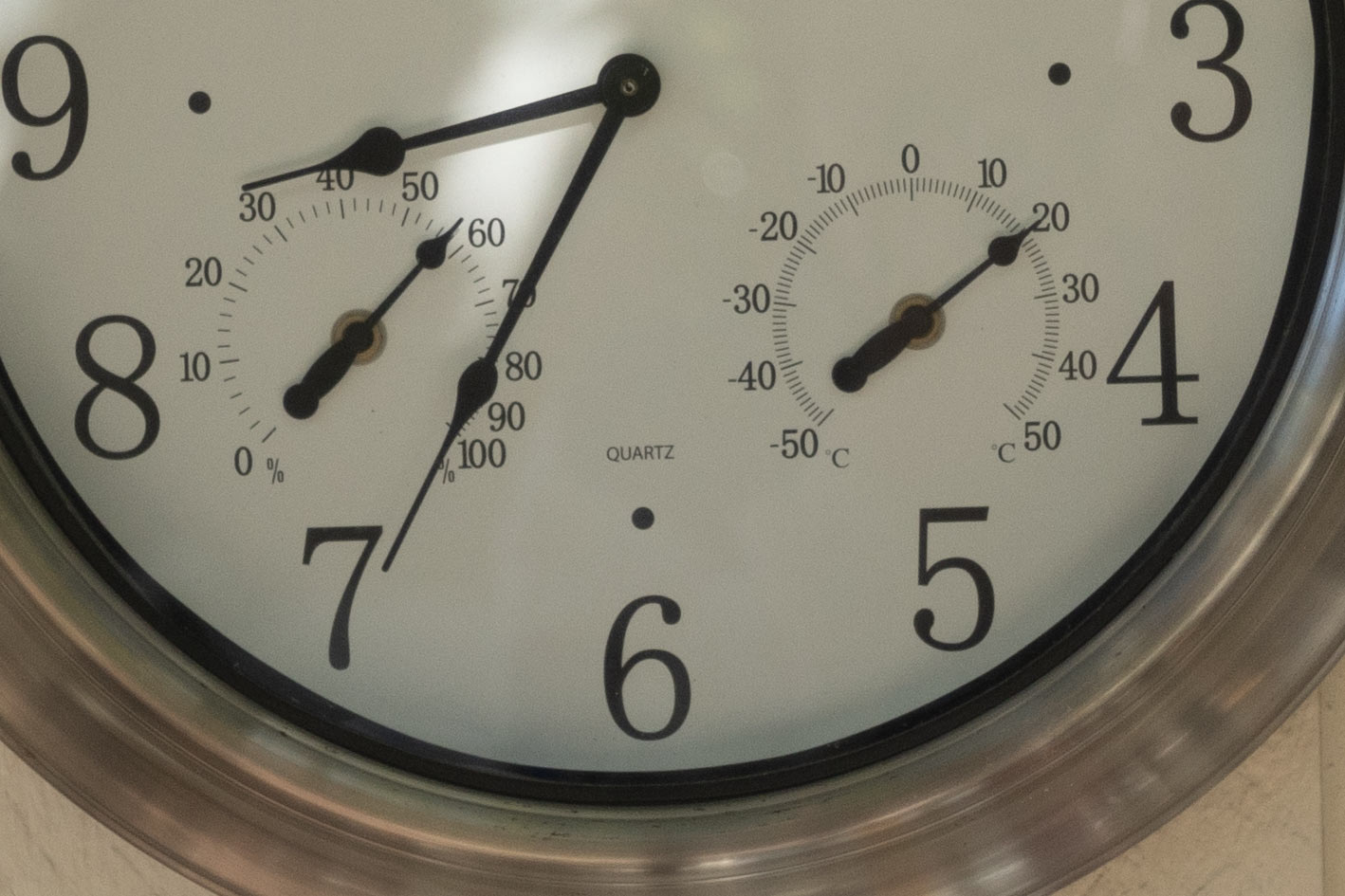 The surprise is when you zoom into the center at 100% and examine the detail closely. This is a sharp lens!

At least the center is sharp. But wide open the edges are soft and lacking in detail. Modern lenses have the same problem but this is really poor.

At f/3.5 where we expect to see a lens’ weaknesses this lens is a surprise. It is amazingly sharp in the center. The edges are another matter. The edges are out of focus and lack contrast. This is not generally acceptable performance for a modern lens but, considering what this lens was designed for, it is not so bad! It would certainly not pass today as a landscape lens but as a lens for family snapshots it is more than adequate.

If you look at it, the front element of the lens is right at the front of the lens barrel and has no protection from light coming from the side or front. In addition, these early lenses did not receive the advanced anti-reflective coatings we have today. As a result it will flare badly if the sun comes anywhere near the front of the camera. Either this lens needs a good lens shade or you should keep the sun firmly at your back. Of course this is exactly what people were told when this lens was designed. 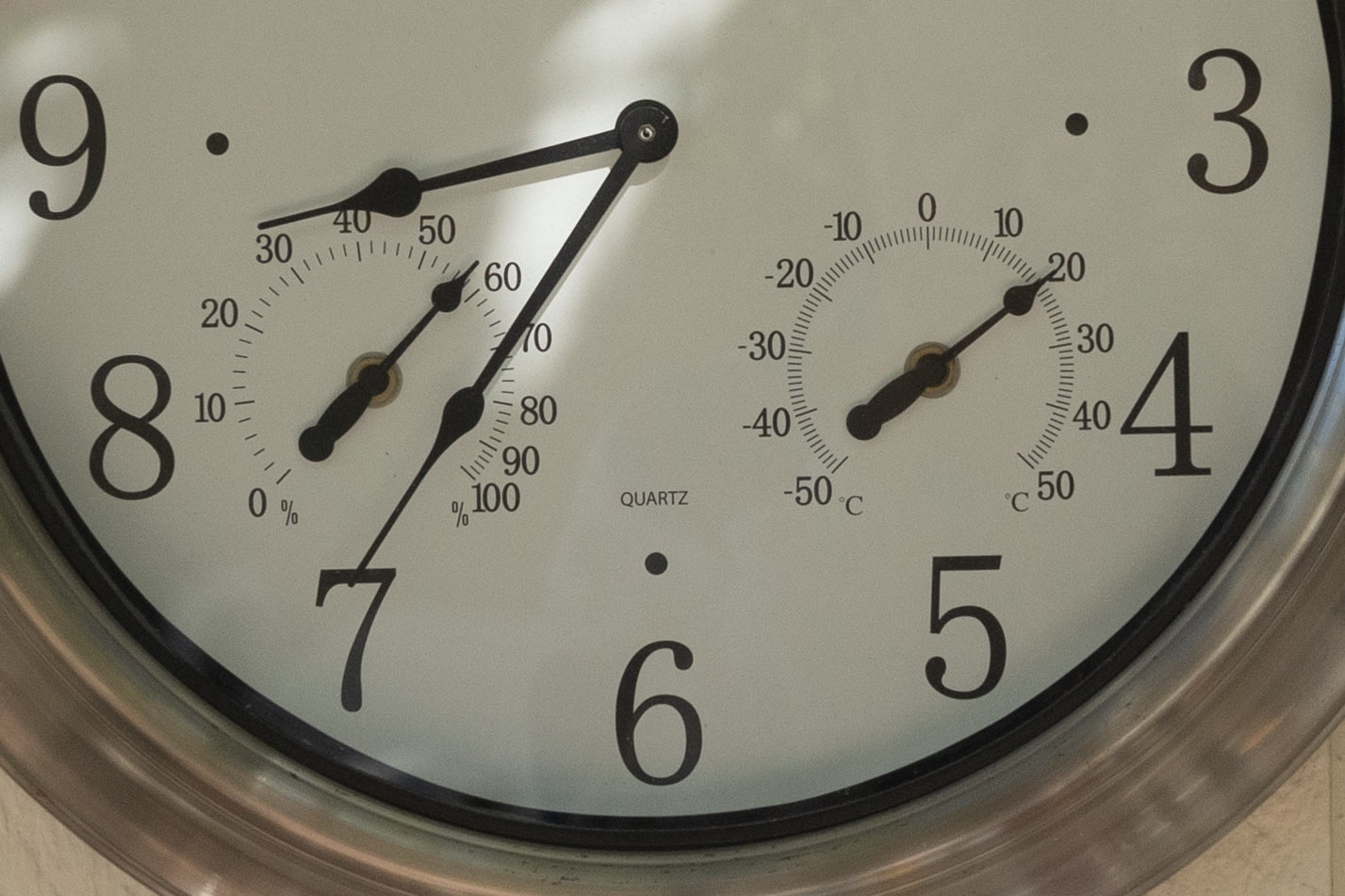 In the center sharpness and contrast are increased at f/5.6 and are excellent by f/11. 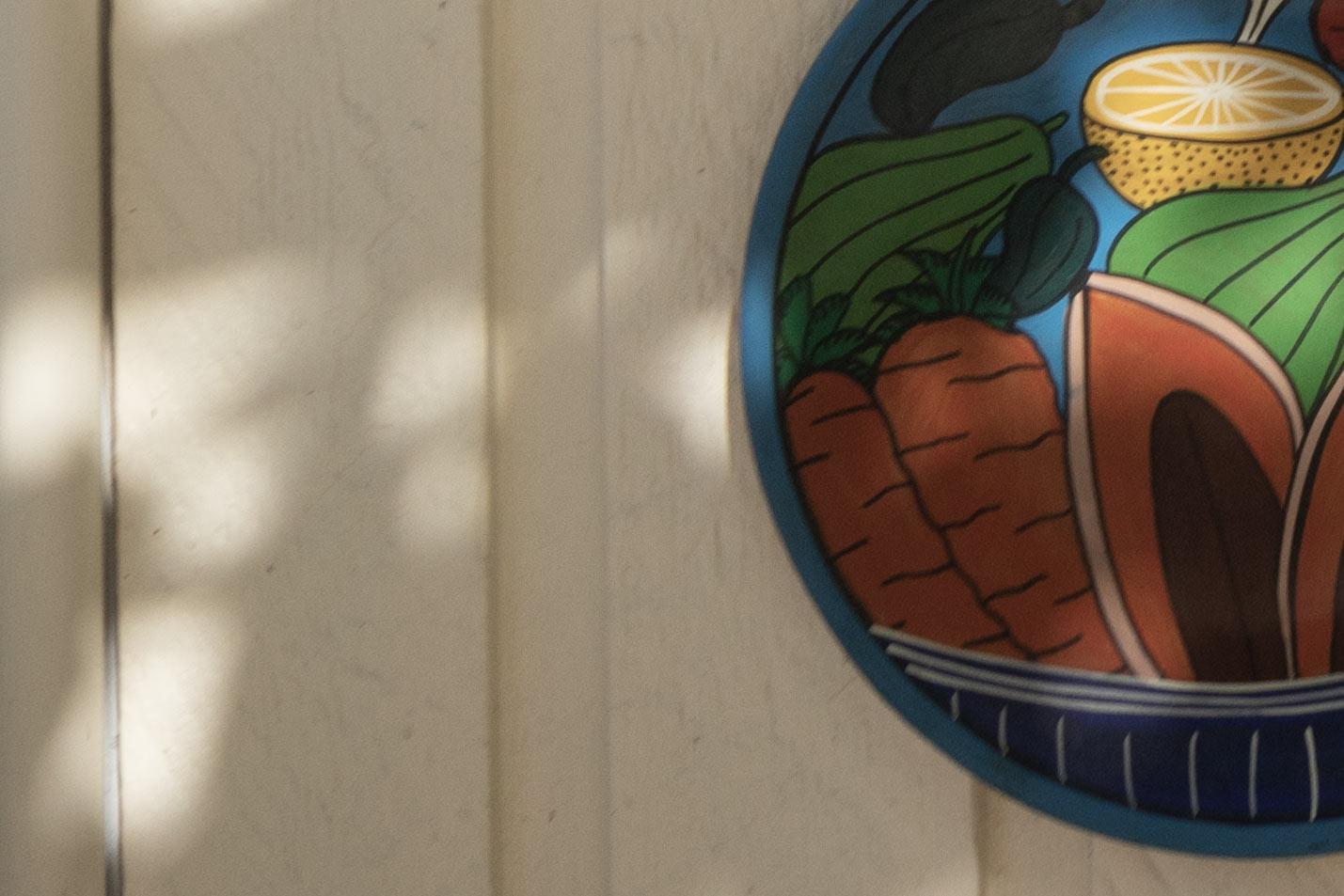 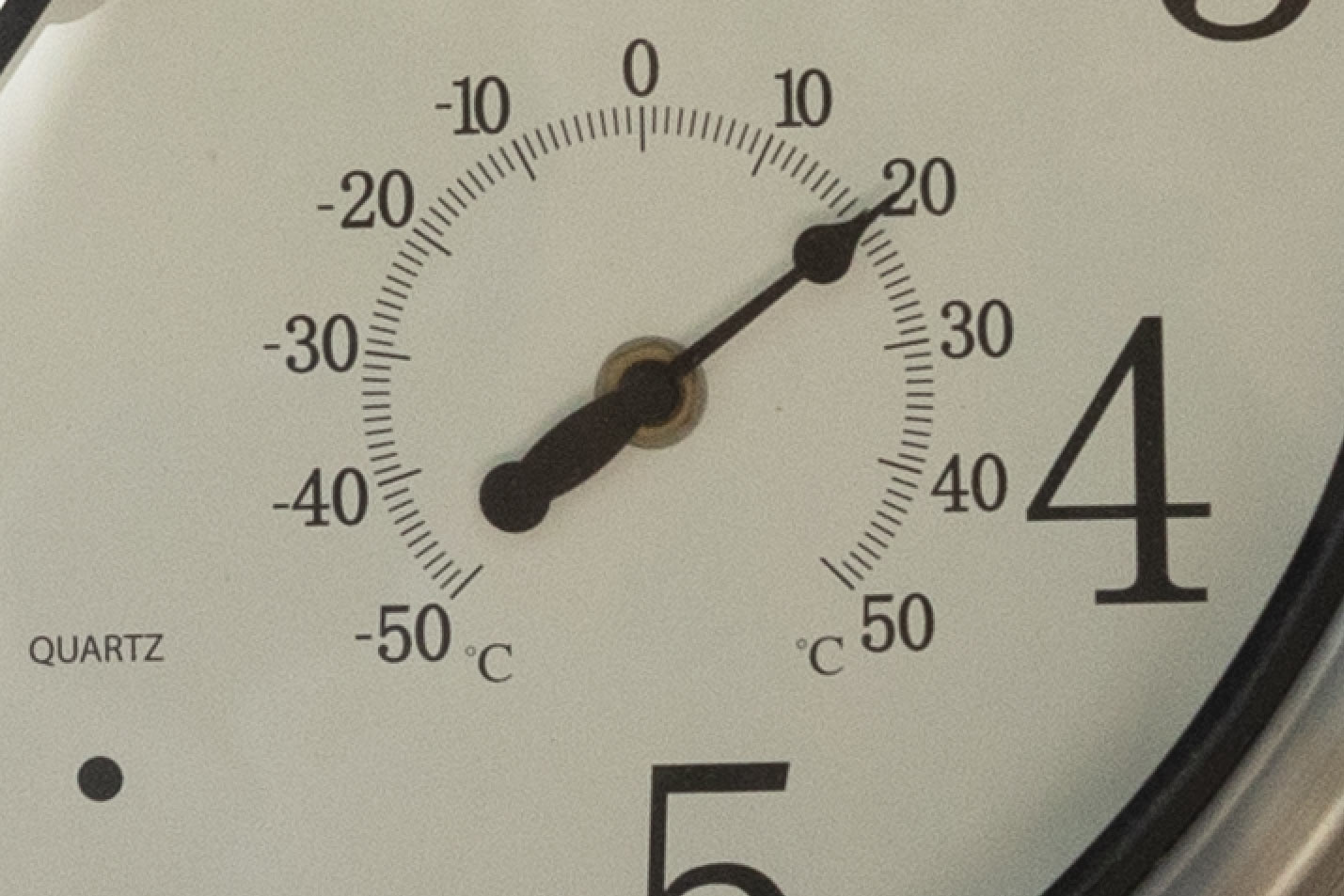 The center of the image at f/5.6 is amazing. It certainly exceeds the resolutions required at the time this lens was designed and made.

This lens certainly performs beyond what was required when it was designed and built. And don’t forget that it is constructed with four pieces of glass only. It is no mystery why it was in production for so many years and over 300,000 copies were made of the original Leitz lens. Kitchingman suggests that Canon made around 14,000 copies of their lens.

So, after all of that, can this lens take good pictures. Even with all its shortcomings, the answer is a resounding yes.

Look at the image below from Susan’s garden. The lens is set to f/8.0 and I have processed it in Photoshop the way I would any image to keep the playing field level. There is nothing wrong with this image!

I have not taken it out with film yet but that is next. I have it on one of my Canon Model III’s ready to go! 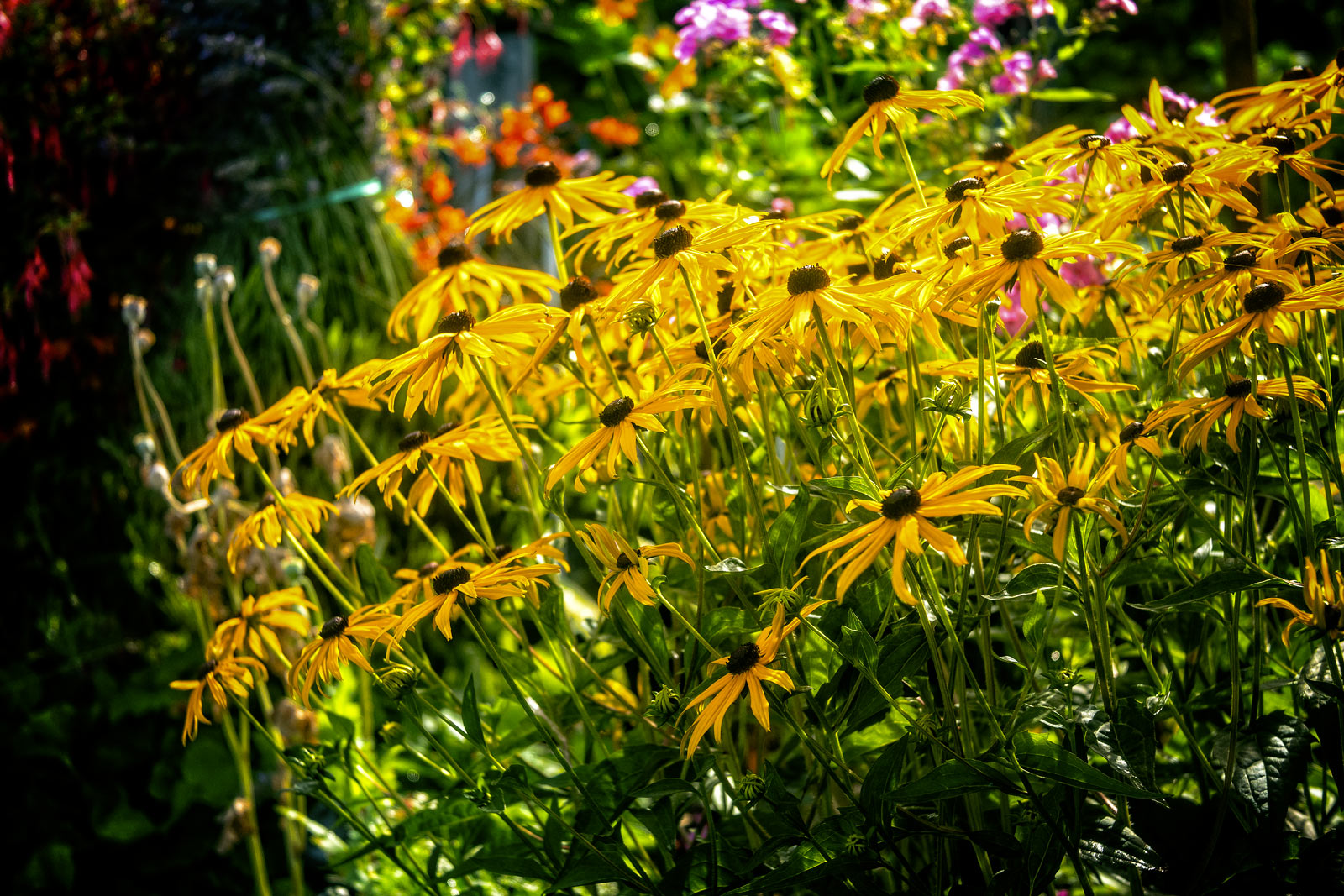 This is a full frame from this 50mm f/3.5 lens set to an aperture of f/8. The sun is in front of the camera but the lens is in the shade to eliminate flare. I have processed this image in Photoshop the way I would any image to allow the lens to look its best. 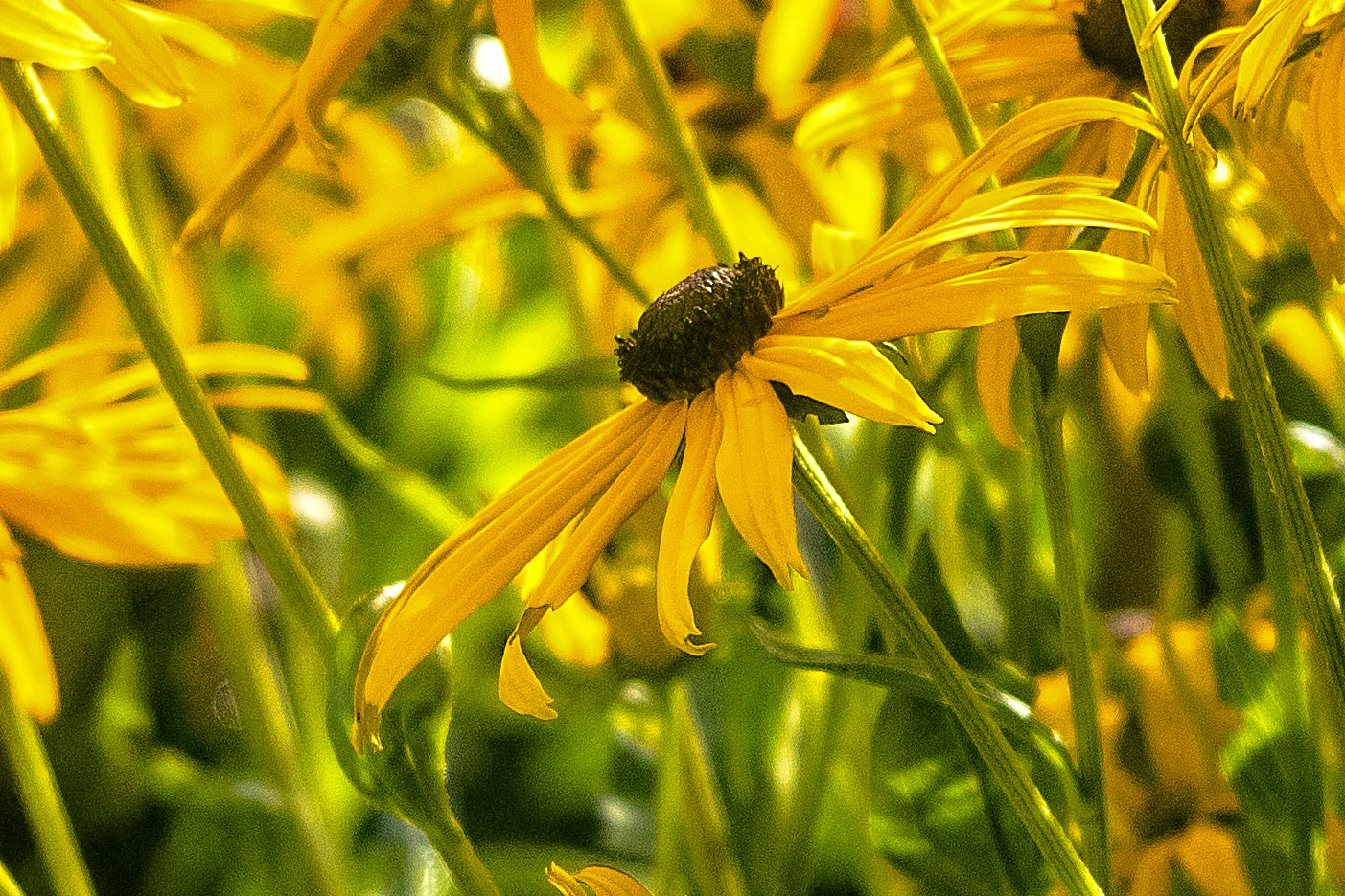 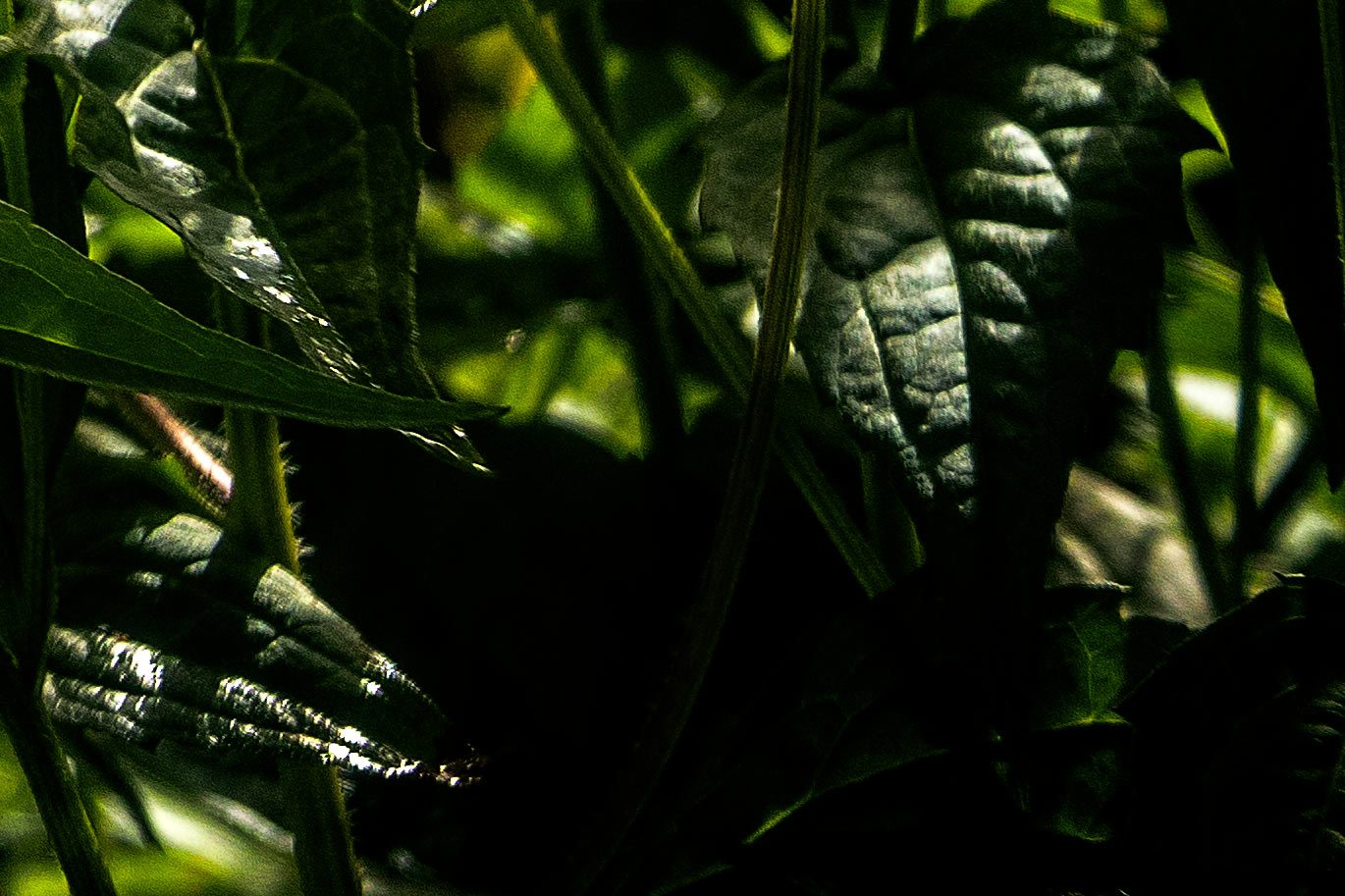 Even in the corners it is pretty good. Look at the hairs on that stem!