The early Canon cameras, before the Model VT, were designed after the Leica II’s and III’s. Just looking at them there can be no doubt. But they were not copies because from the begining Canon worked to improve on the Leica and to be different than Leica. The Canon Model IIB is an important development in that effort.

Before the War, and in the few cameras made during the war, Canon’s cameras either had no rangefinder or had a rangefinder and a separate pop-up viewfinder. However, with the S II camera,  introduced in October of 1946, Canon joined the two, the rangefinder and the viewfinder, into a combined device mounted under the camera top deck.

Unfortunately the short optical base and the lack of focusing magnification made the rangefinder imprecise and not sufficiently accurate for longer lenses or for focus critical wide aperture lenses. This accounts for the lack of rangefinder coupling in early S 13.5 cm 1:4 lenses. 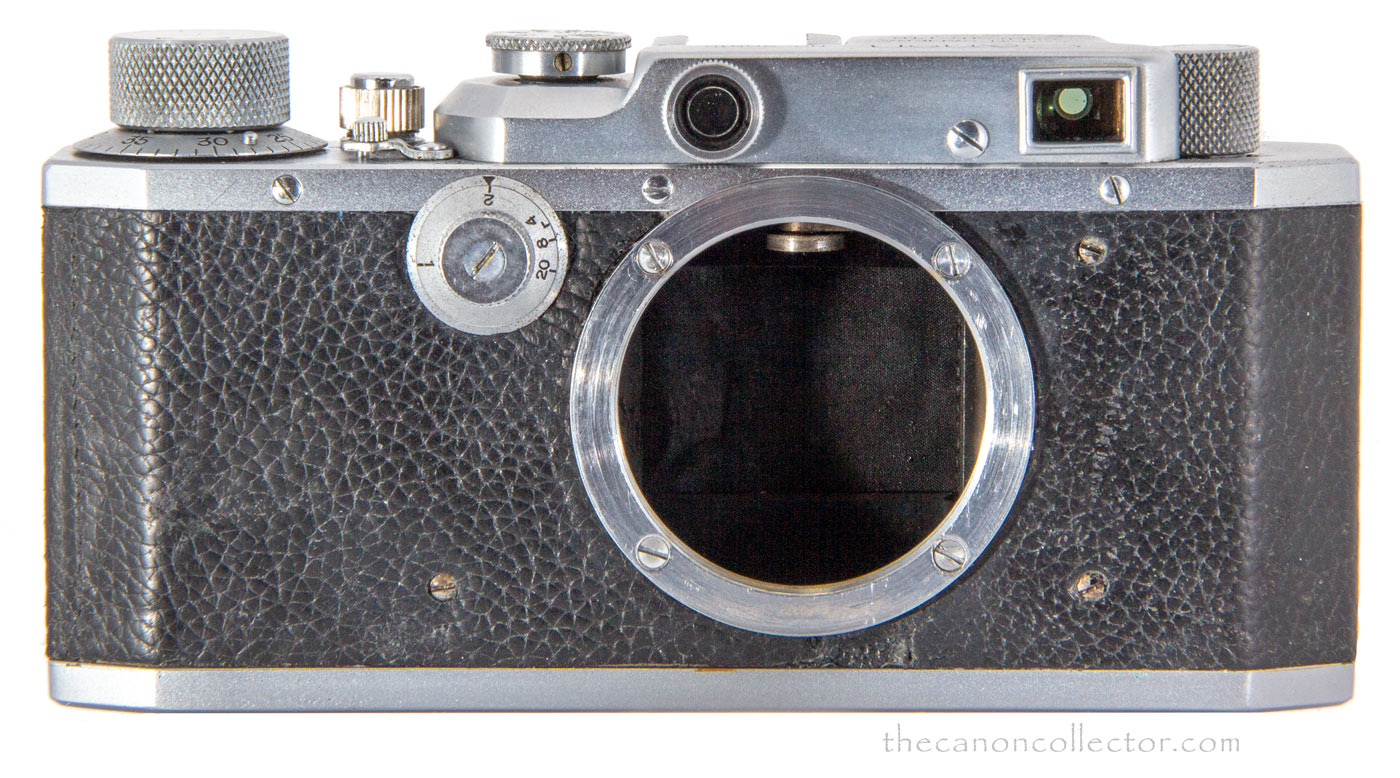 From the top of the S II the lack of the Viewfinder Lever is obvious as is the plain Equipment Shoe. 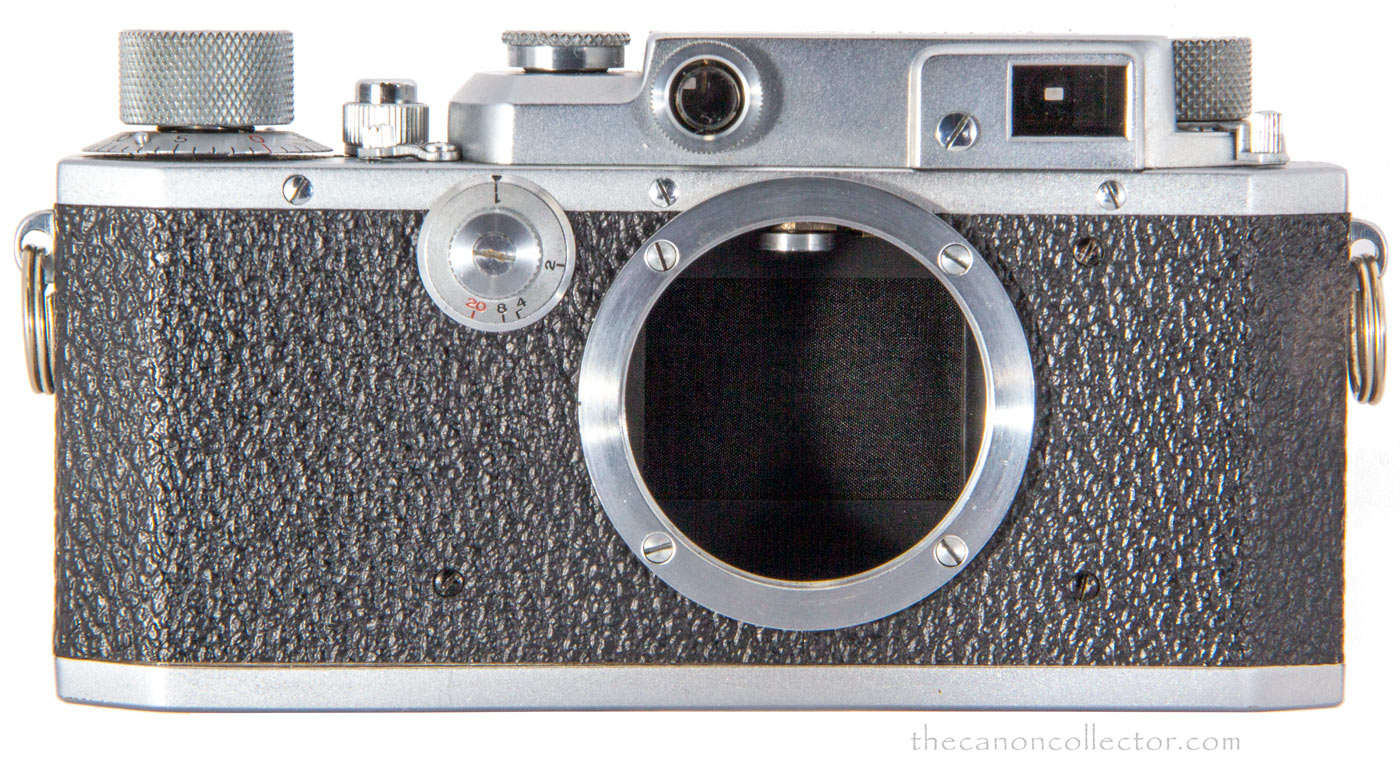 On the IIB above the similarity to the S II is obvious. But notice the larger Viewfinder Window, added Magnification Lever and Lugs.

On the top deck of the IIB you can see the settings of the Magnification Lever. Notice the springs added in the shoe.

Development of the IIB

The shortcomings of the rangefinder on the S II were obvious to the people at Canon. According to Peter Dechert they had an engineer named Ryotaru Yamazne who was set to work on a solution to these shortcomings. His solution was to place a rotating cube in the light beam before the eyepiece and, depending on the position of this cube, the view would be at normal magnification while two other positions gave a magnified view equivalent, approximately, to the view of a 100mm lens and a 135mm lens. The magnified views also magnified the rangefinders double image allowing for a more precise focus. 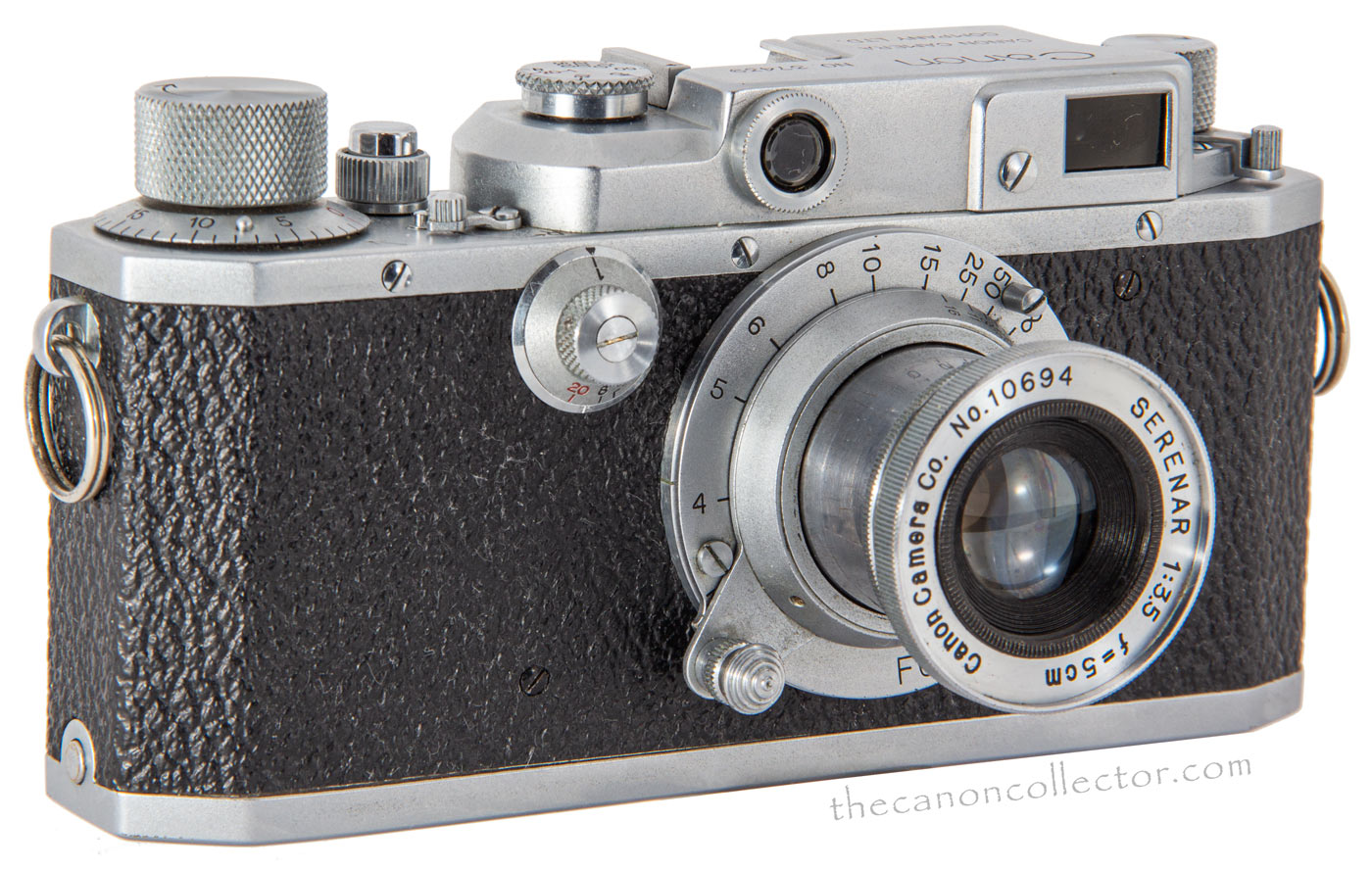 This is the IIB with the S 50mm 1:3.5 Serenar collapsable lens. This was another lens some later IIB’s were sold with.

Production of the new camera was begun in January of 1949. Early advertisements referred to it as the “S-IIb” however within a month or two this name was simplified to “IIb”. The lower case “b” is now usually changed to upper case.

The IIB is basically a Model S II with three changes. Camera Strap lugs were added to the body. The equipment shoe on the top of the camera was improved by the addition of springs to hold attachments securly in the shoe. And finally, the view/rangefinder was rebuilt. Otherwise they are the same camera.

With the introduction of the IIB it was now possible to focus more accurately with wide aperture and telephoto lenses which had more critical focus requirements.

The IIB was the last Canon Camera to bear the “Canon Camera Company Ltd.” corporate name. The improvements

to the View/Range Finder were a truly useful development and one that established Canon as a serious producer of fine cameras.

The IIB was in production from January of 1949 until July of 1952 and, according the Dechert, about 14,400 units were produced. They were very popular with Allied occupation troops and it was this market that became a mainstay of Canon’s customer base in the early years. 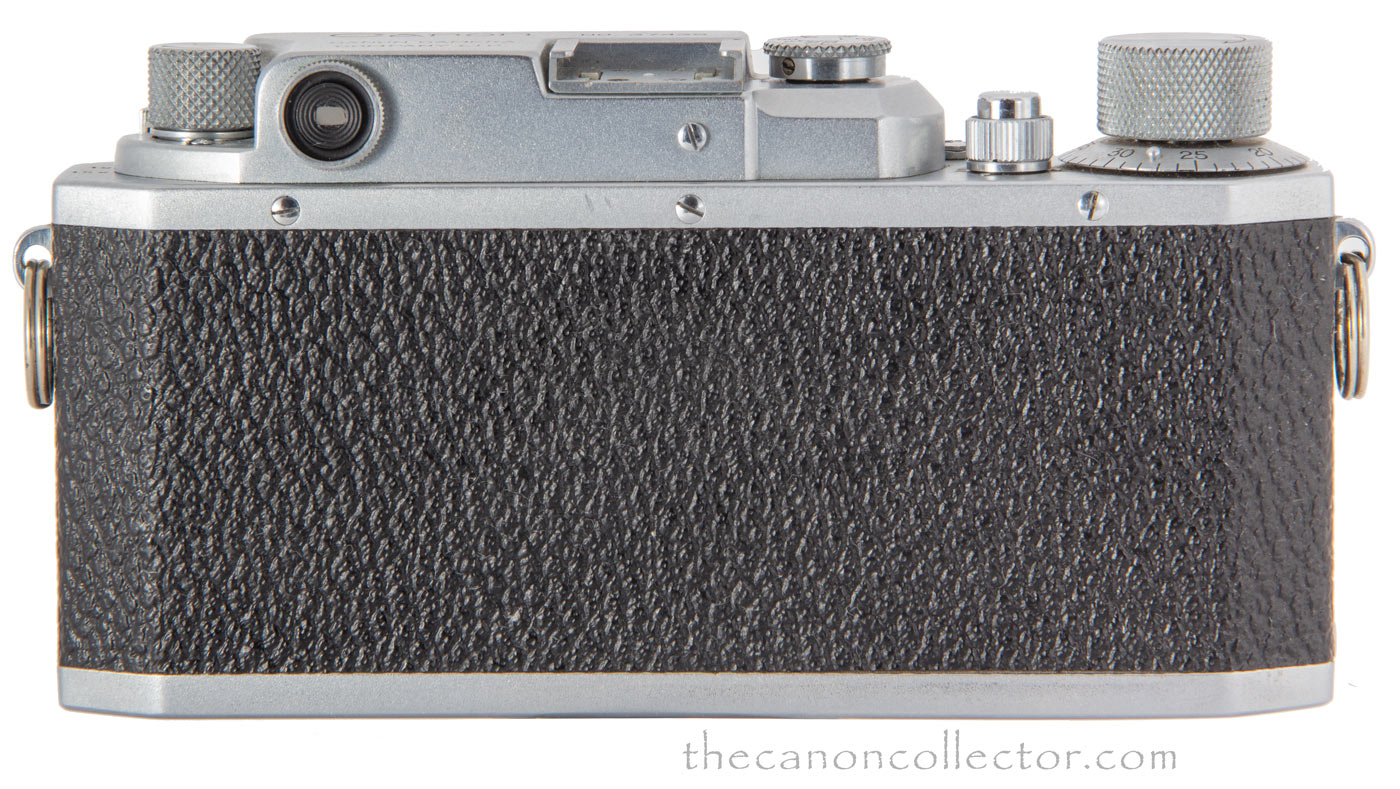 From the back this looks like an S II. How can you tell its a IIB? Look at the shoe on top. And the Lugs for the neck strap.

It is easy to tell what this is from the top. Check the Magnification Lever and the Shoe. And the Lugs for the neck strap!

From the bottom the S II and the IIB are pretty hard to tell apart. Your best bet is to look for the neck strap Lugs on the ends. 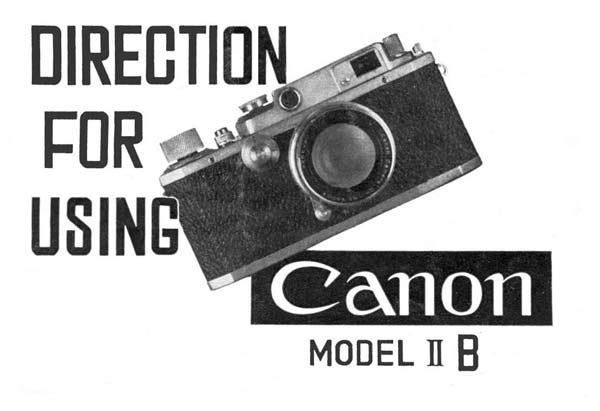 The Instruction Manual is very short on detail for a camera thatis not easy to load or operate. But this is all you get for your money. 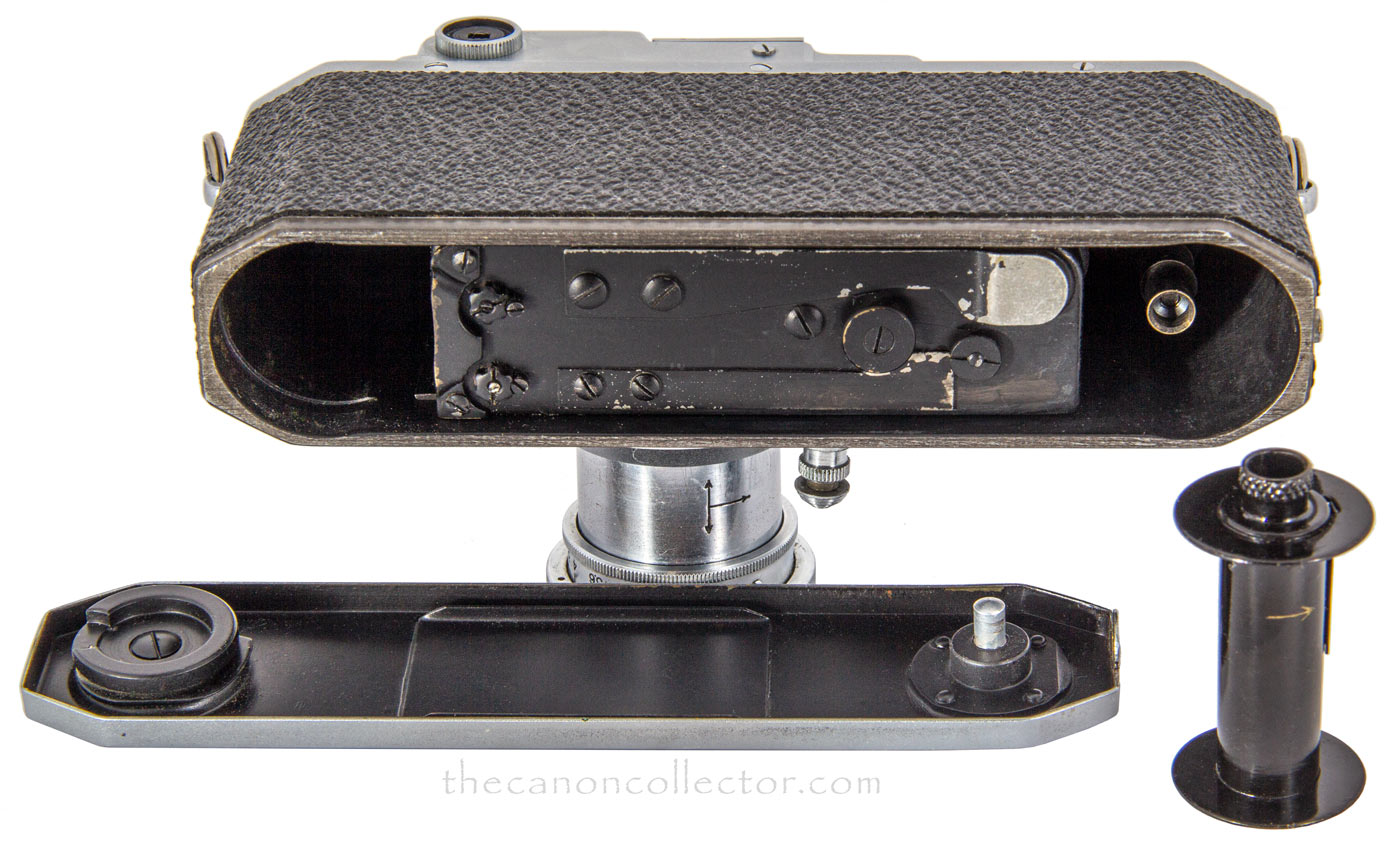 The IIB loads from the bottom like all early Canon Rangefinders. The trick is to have a long leader. About 4 inches.