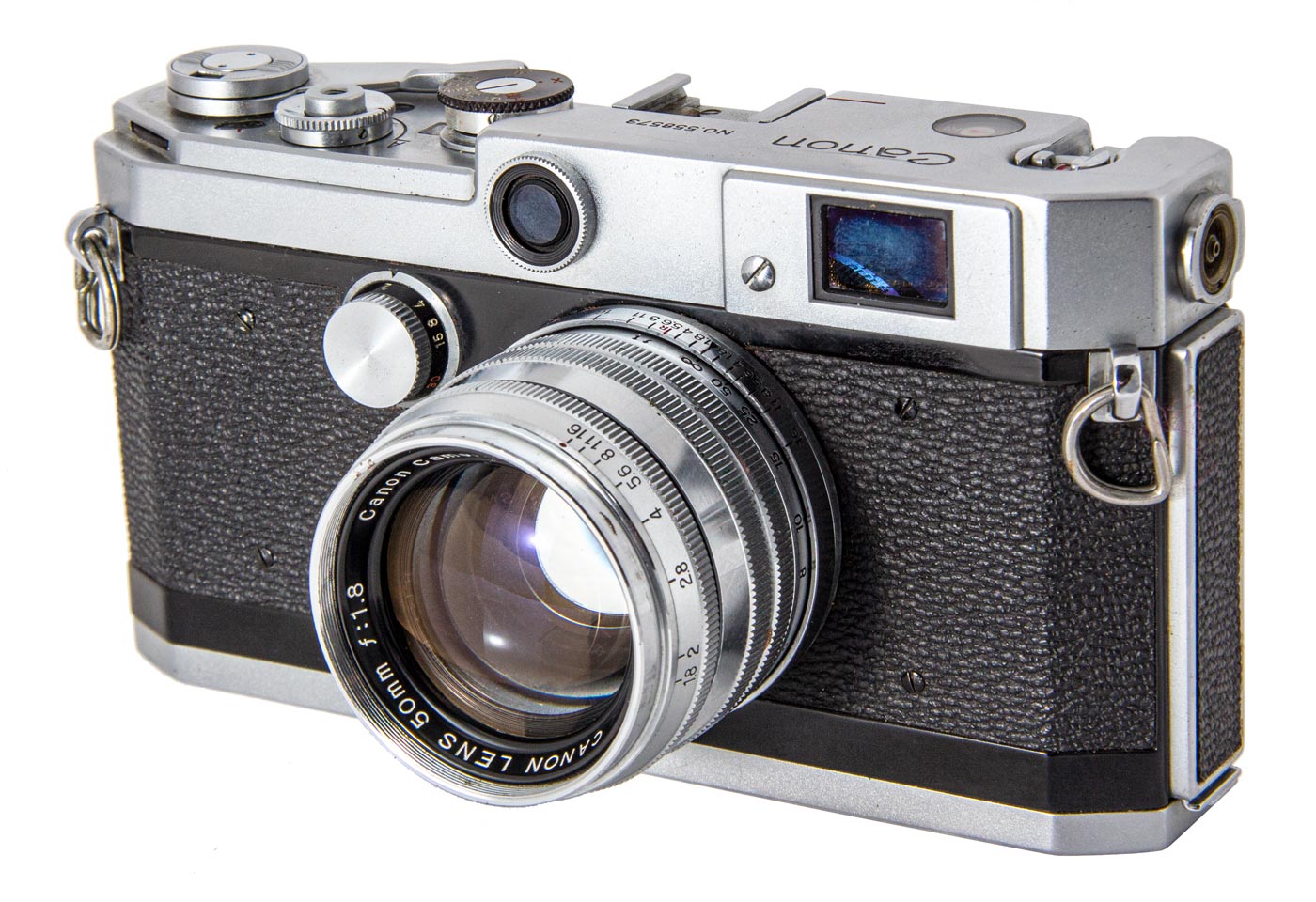 The Model L1,
pictured here with a Canon 50mm f/1.8 lens,
looks exactly likethe VT on which it is based except for the top mounted thumb lever film advance. 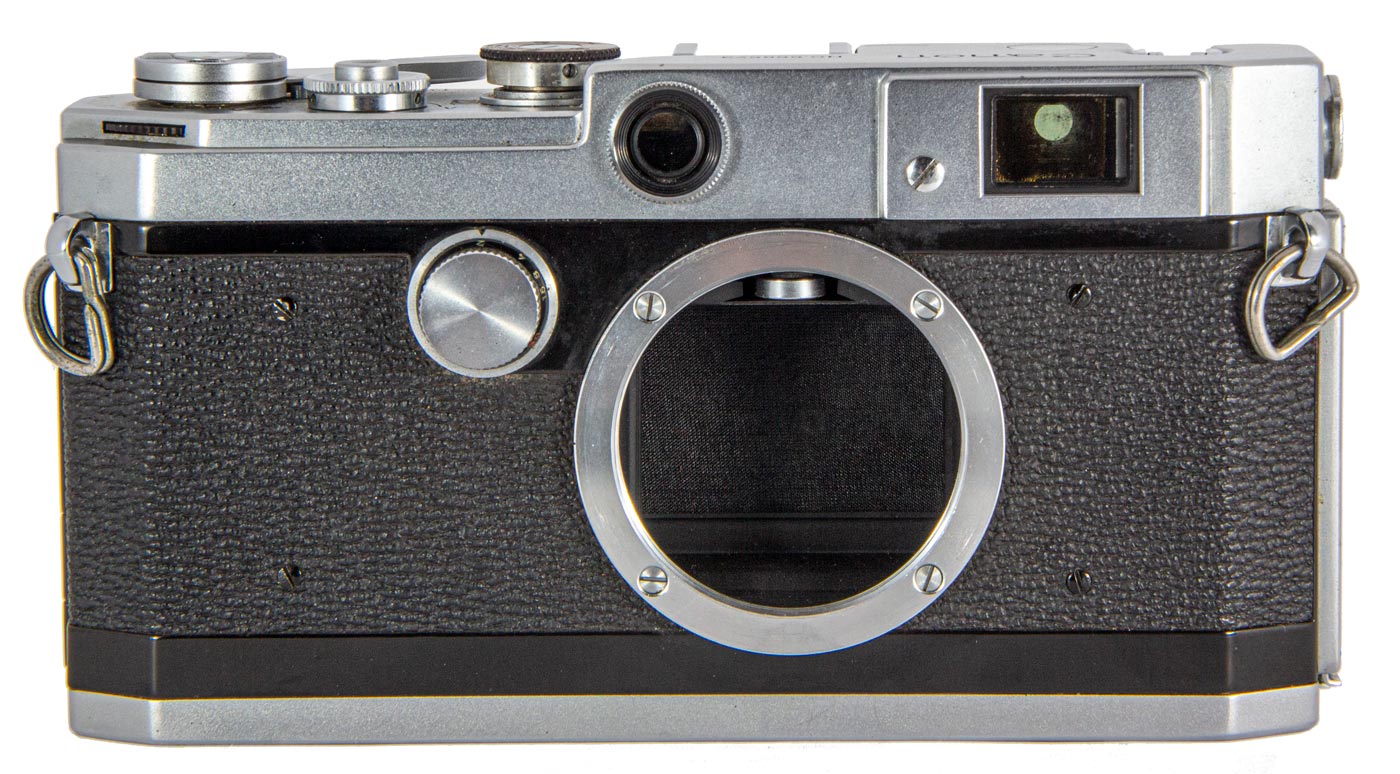 The L1 retains the hi and low speed dials of earlier cameras and it lacks a delayed self timer. It still mounts M-39 lenses. 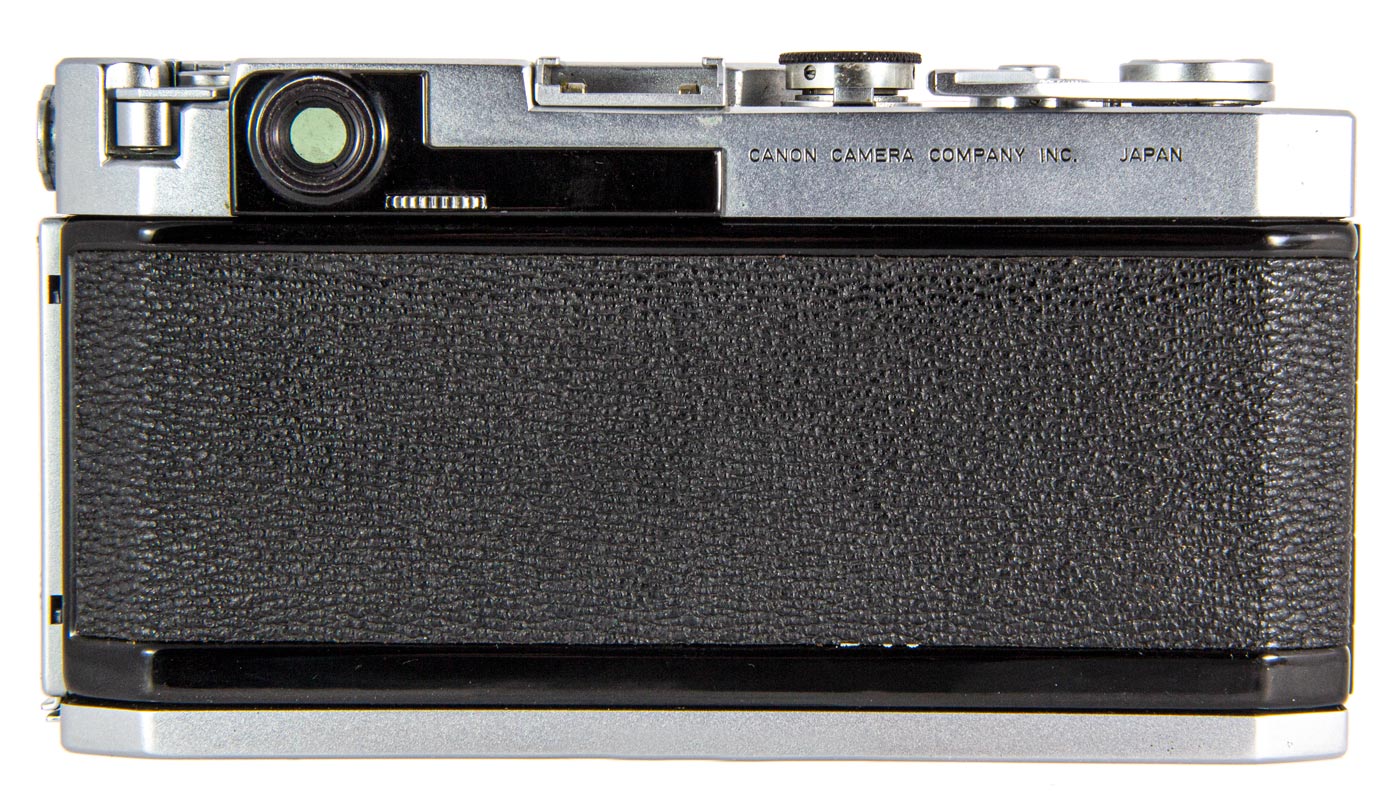 Below and to the right of the viewfinder eyepiece is a thumb wheel that allows selection of viewfinder magnification of 35, 50 or 135mm lenses.

Most of the controls are on the top deck. In the left end is the rewind crank folded into its stowed position. On the bottom is the Model name of the camera and the key that unlocks the back of the camera.

Variations on the Model VT

When Leitz introduced the Leica M3
in 1954 they introduced a change
in the design of 35mm rangefinder cameras. To that point Leitz, and
Canon, were introducing variations
on the Leica II’s and III’s which were pretty much based on the original Barnack designs for his 35mm camera. The M3 introduced a new
design and new features that were to make the M3 the most popular of all the Leitz 35mm cameras.

At the time Leitz was developing the M3 Canon was beginning production of the Model IVSB2 which proved to be one of the finest bottom loading 35mm cameras ever produced.  But it’s exterior design was based on the traditional Leica designs with all of their problems.

Canon immediately began redesigning their 35mm camera to counter the market threat posed by the M3. A year and a half later Canon was ready with the Model VT, a radically new camera design more along the lines of the M3 which they introduced in April of 1956. Internally, it was very much a IVSB2 with a rapid wind base plate, PC socket and no side rail, a greatly improved viewfinder and a swing open back.

It was a wonderful camera. But the trigger style film advance was not popular although Canon seemed to like it and continued to play with it right up till the introduction of the Canonflex. However, bowing to the demands of the market they introduced the same camera with a thumb film advance the following year.

In March of 1957 they introduced an economy model of the VT, the Model L2. It had a thumb lever film advance.

Then in May of 1957 they released the Model L1 which was presented as an improved Model VT. The L1 was a VT with the thumb lever film advance and a crank rewind rather than the familiar knob 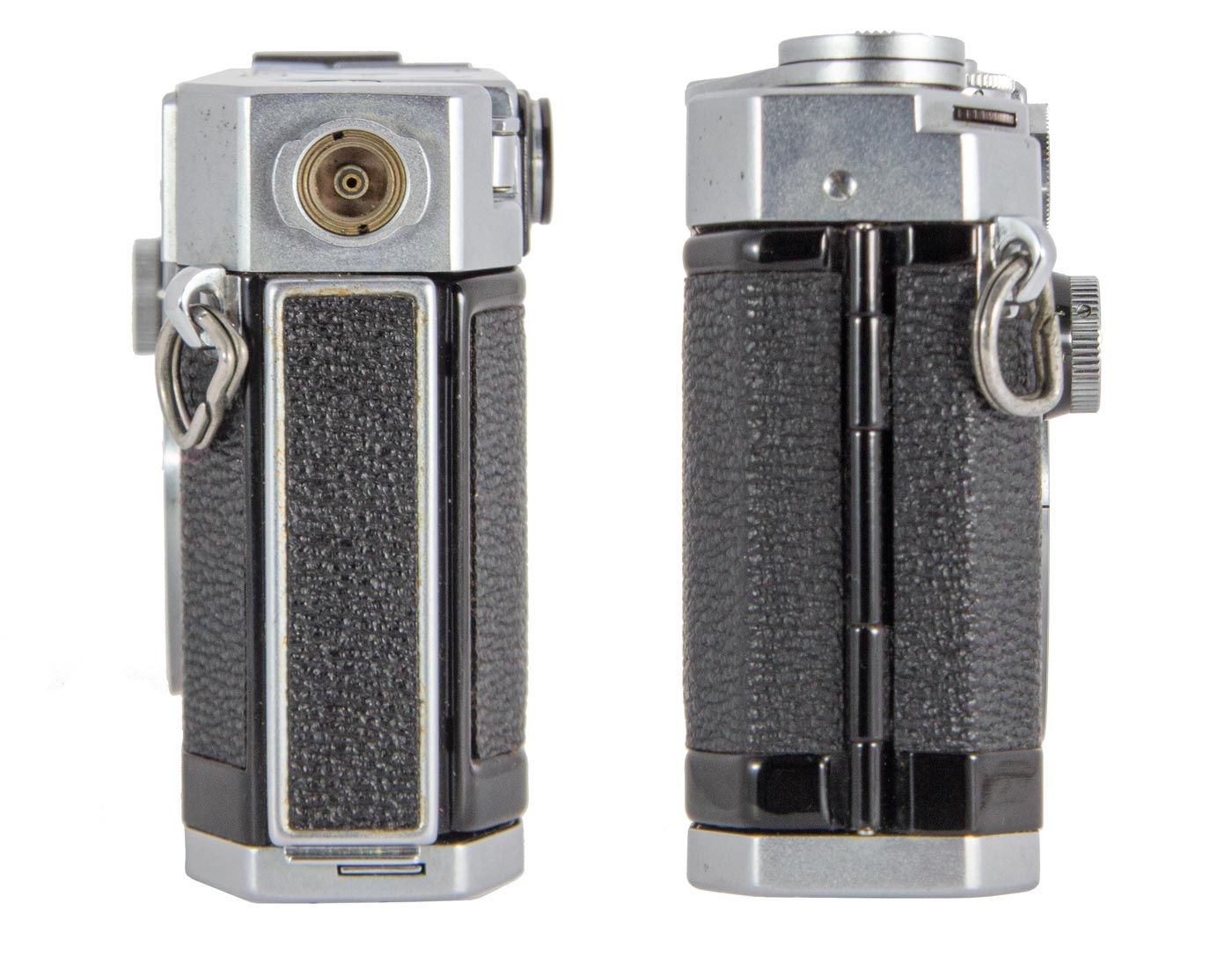 In the left end at the top is the new style flash attach point introduced with the VT. The other end shows the hinge for the swing open back for easy film loading.

style. This was the first Canon camera with a crank style film rewind.

Another “improvement” in the L1 was the addition of a locking key in the baseplate. To open the camera back you first turned the key, then you pulled a tab on the left end of the camera at the bottom to release the catch holding the back closed. The tab could not be pulled unless the key was turned.

According to the Canon Museum, early production L1’s had cloth shutter curtains but the later ones had thin stainless steel curtains which prevented holes being burned in the curtains by the sun.

The L1 and the VTD were the first Canon models to be available in a black paint finish from the factory.

Dechert says that some photographers view the L1 as the best rangefinder camera that Canon produced. 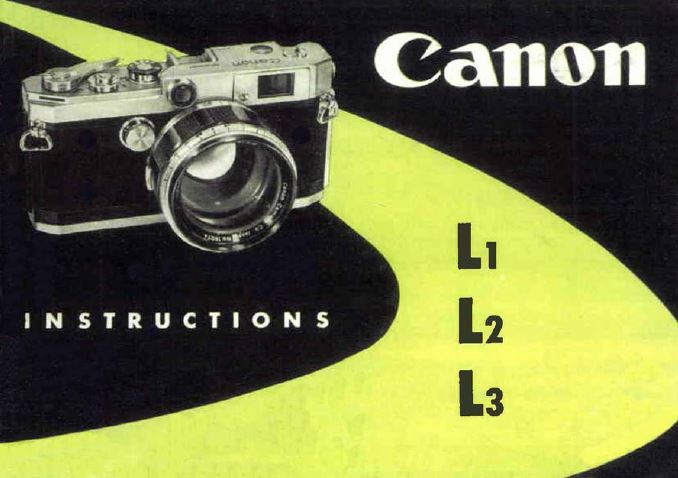 The User Manual for the Models l1, l2 and l3 contains operating instructions. All three cameras are based on the Model VT and are sufficiently similar that they can share one Manual.

Opening the back reveals
what is now considered the traditional internal layout for a 35mm camera but at the time it was innovative. The rewind crank is shown in the upper left corner in its stowed position.

This camera is in excellent condition. All shutter speeds work and are accurate. The viewfinder is bright and the split image is strong. I have used it with film and it is a pleasure to shoot.