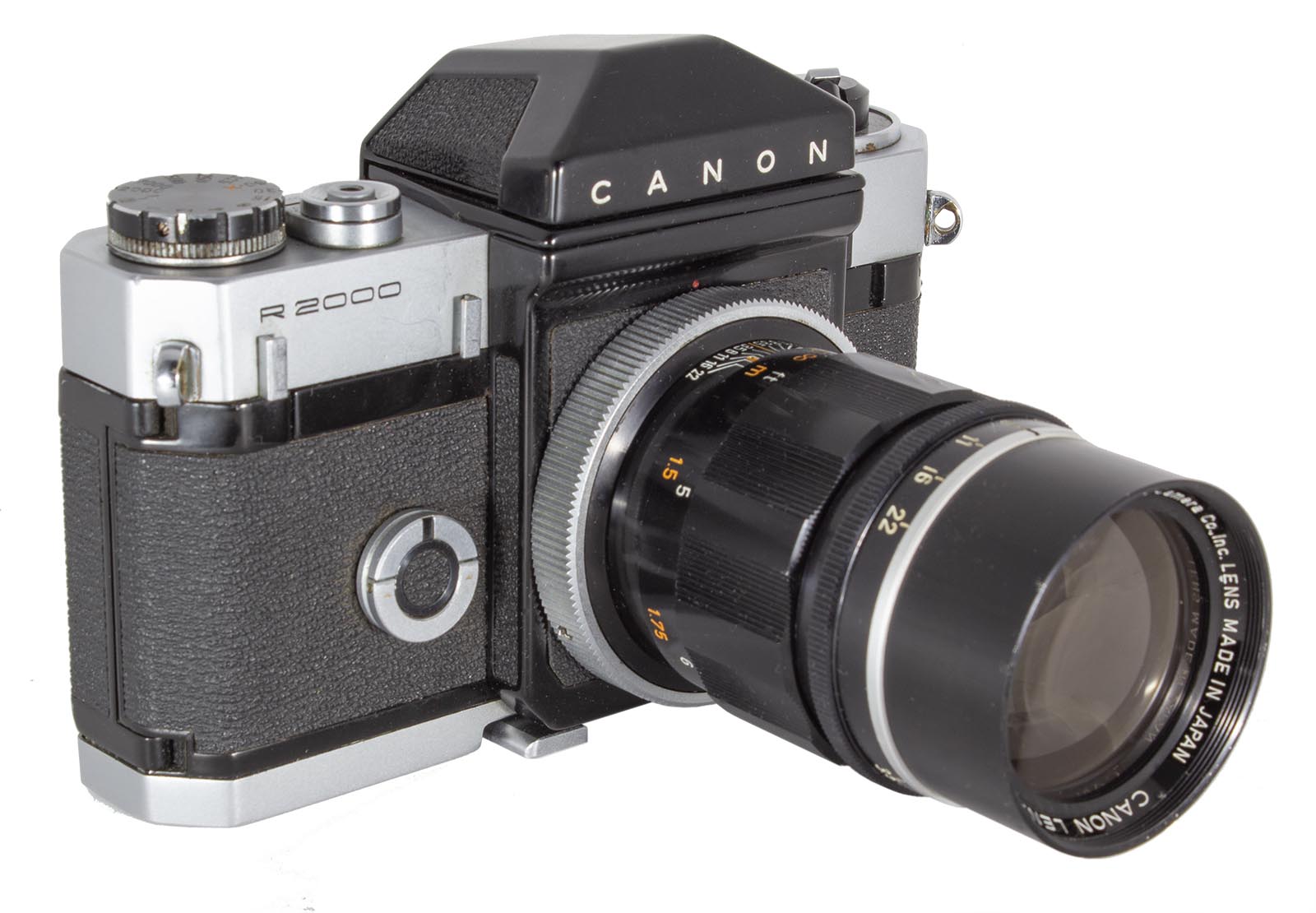 Lets talk about the 135mm lens that Canon produced for the Canonflex camera. Or did they?

This is a little bit of a tangled
story. The camera market
was in the midst of the
change to single lens
reflex from rangefinders
and an effort was made to
adapt existing hardware to the
new system which resulted in some confusion for the collector.

The story is complicated by the fact that the Canon Museum, a goto source for any Canon collector, lists two R 135mm lenses but the images shown for them are incorrect. Now, this is supposition on my part as I will explain but I am pretty sure I am correct.

Over the years Canon had produced various 135mm lenses for their rangefinder cameras. They had the Leica M-39 lens mount and these are all generally referred to as Canon “S” mount lenses. When Canon brought out the Canonflex they introduced a new lens mount, the “R” mount, presumably being “R” for Reflex.

This is the Canon Museum image for the S 135mm f/3.5 II lens vailable in 1959 when the Canonflex was introduced. 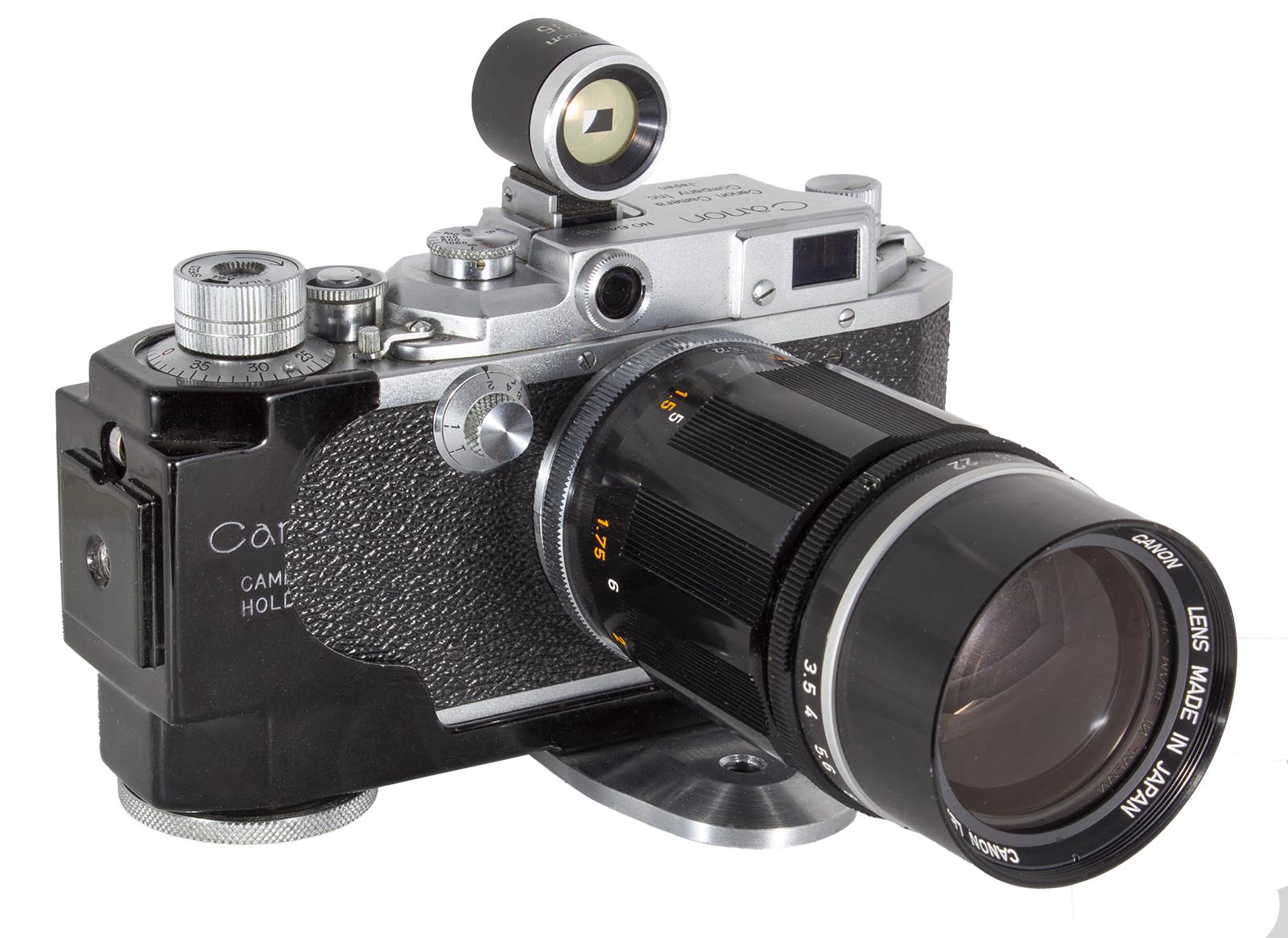 The Canon model IIIA in a camera holder with the S 135mm f/3.5 II lens mounted on it. In the accessory shoe is a 135mm viewfinder.

In 1959, when the Canonflex was introduced, the current rangefinder 135mm  f/3.5 lens was the S 135mm f/3.5 II pictured on the left. It was a beautiful lens, all metal construction, finished in black paint. On a rangefinder camera it was well balanced and looked and performed fantastic!

Faced with creating a lineup of lenses for the new Canonflex camera Canon pressed the S 135mm f/3.5 II into service. Because the flange distance on the new reflex camera was greater than for the rangefinder cameras, the barrel had to be shortened. Doing that, adding a locking collar for the new lens mount and removing the focusing tab was all that was required.

The R 135 f/3.5 was available with the introduction of the Canonflex. Now, the Canonflex is a big camera compared to the rangefinder cameras and so this lens, to my eye, looks awkward and out of place. However, it was a performer and it served its purpose. 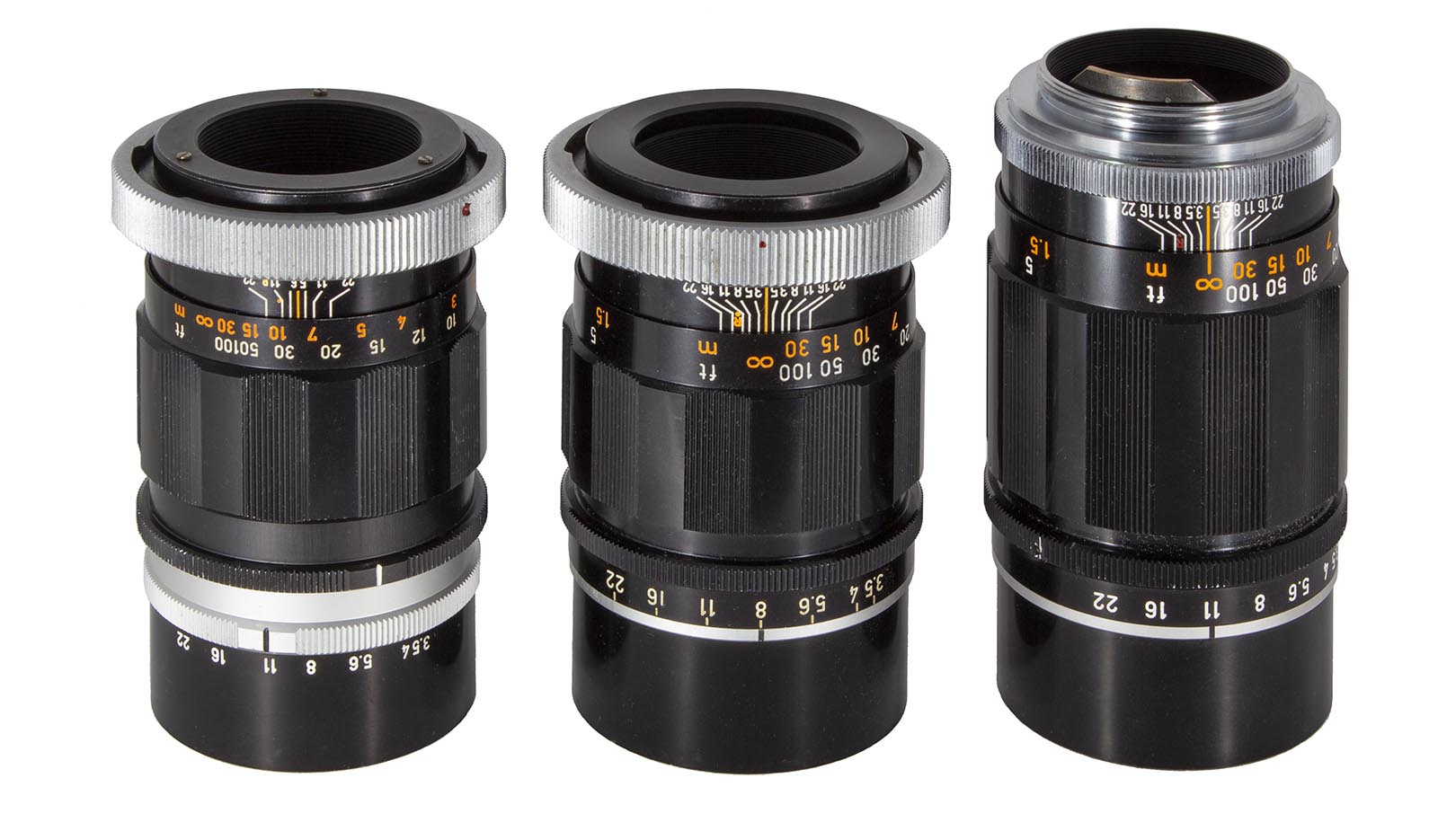 Line up the “S” lens and the “R” lens on their respective cameras and you can see that the distance from the front of the lens to the film plane is the same. The “R” lens is shorter due to the added space for the mirror on the Canonflex.

Now this is where a little supposition comes in. The Canon Museum says that there were two R 135mm f/3.5 lenses for the Canonflex. And they show two lenses but they appear to be images of the S 135mm f/3.5 II for rangefinder cameras. I have looked everywhere on the internet and I can not find these lenses. There are two 135mm f/3.5 lenses for the Canonflex but they don’t look like the images Canon gives us. I think the images are simply wrong. I have two “R” lenses that I think are the correct ones and they are shown below. However, if I am wrong, I would like to hear from someone with the correct images. 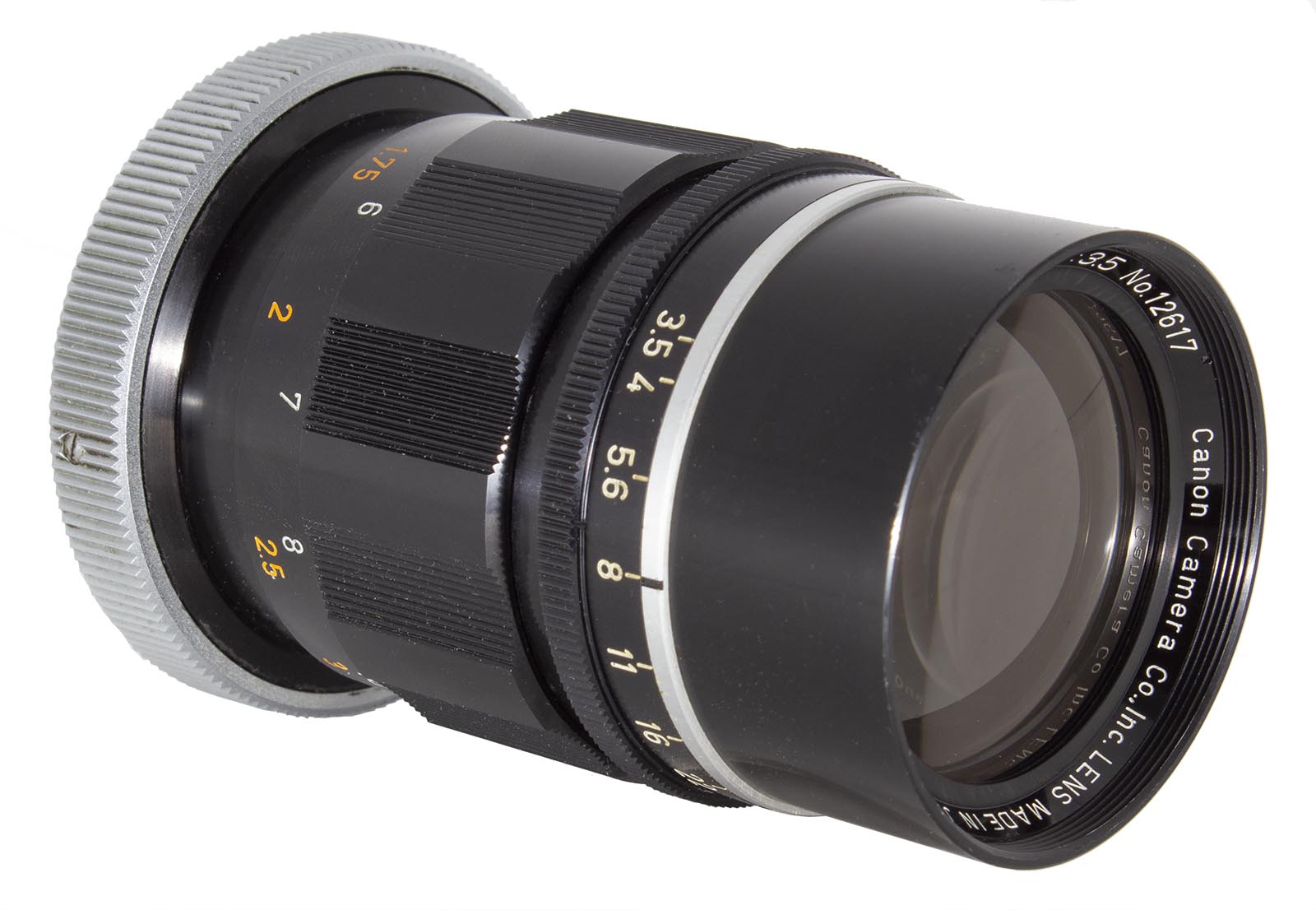 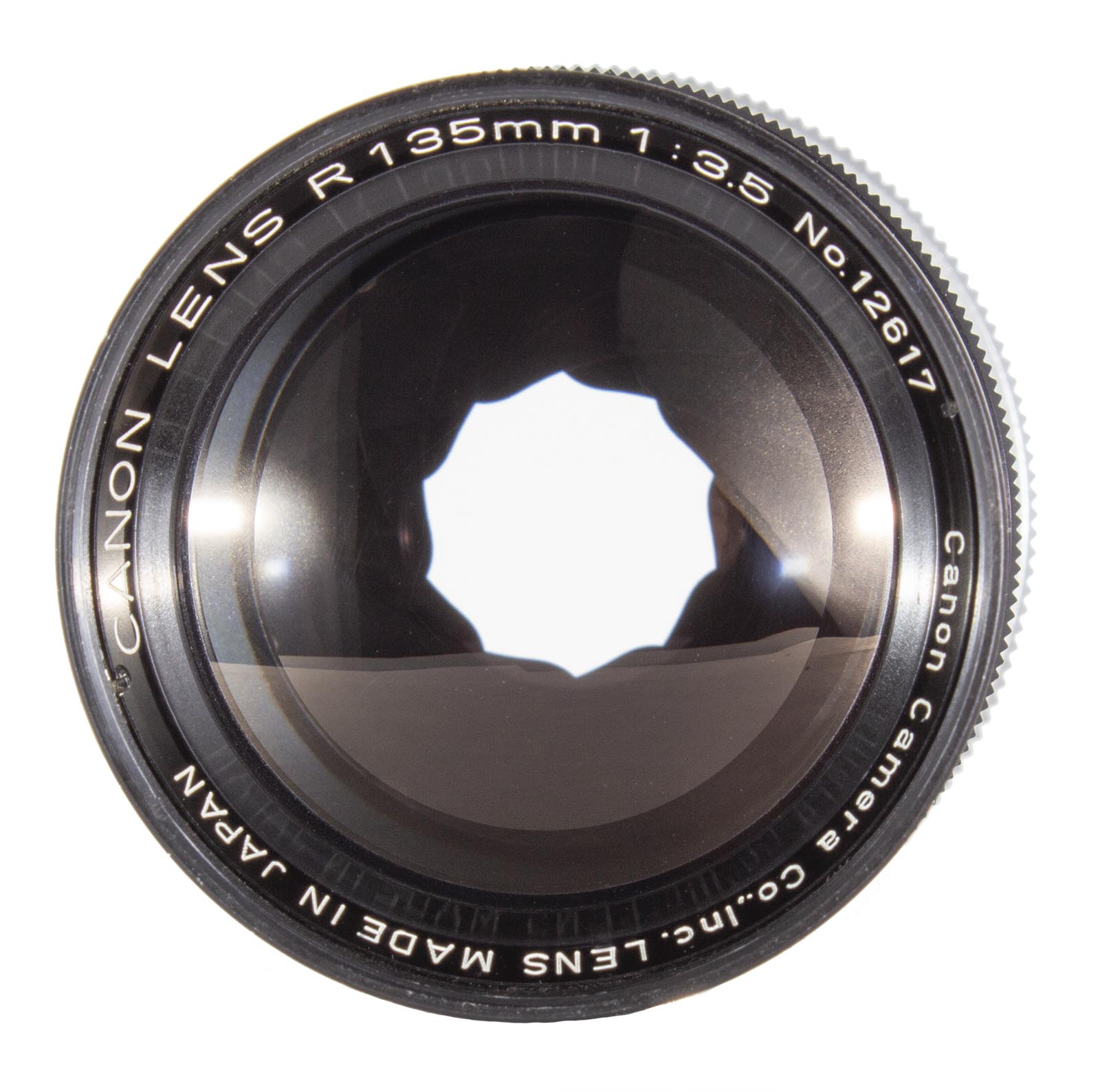 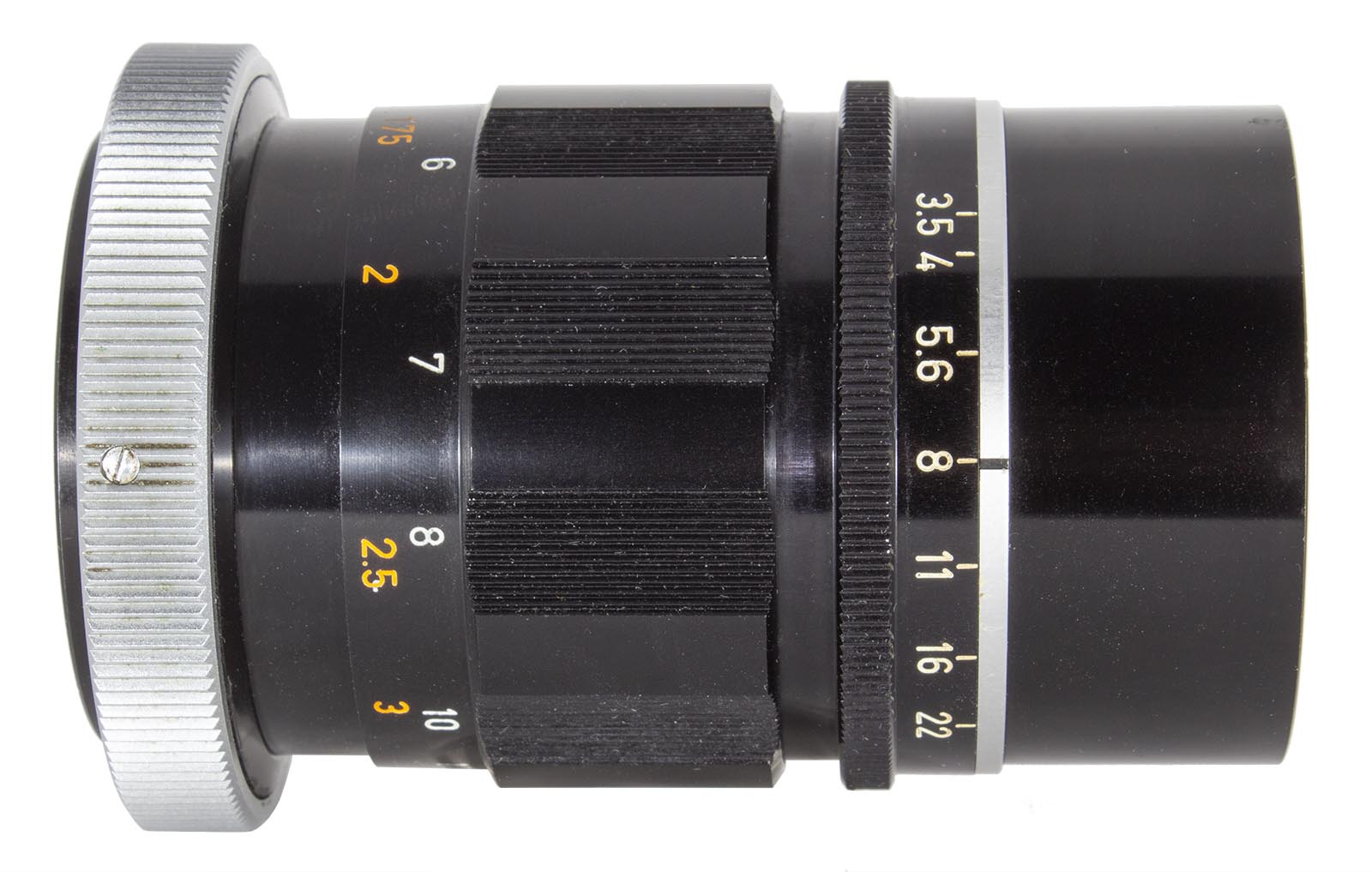 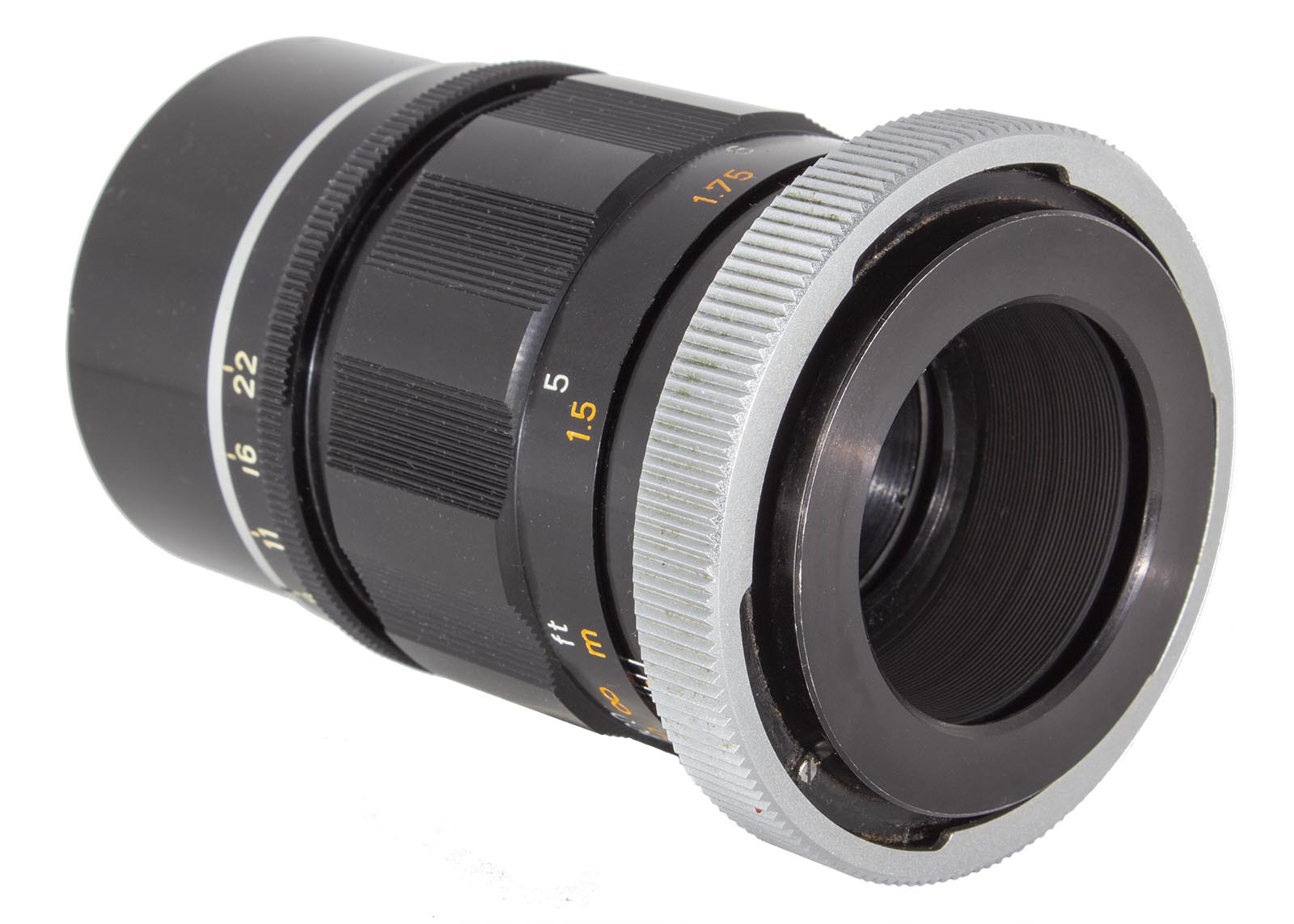 The R 135mm f/3.5 I was introduced in May of 1959 at the same time as the original Canonflex camera. An inspection of the photographs here will demonstrate clearly that the lens is simply the S 135mm f/3.5 II that was currently offered for rangefinder cameras. The barrel has been shortened to accommodate the greater flange distance on the camera body. The descriptions of the two lenses in the Canon Museum are identical.

The silver locking ring looks overly large for the lens but it is necessary to fit on the much larger R lens mount.

Construction consists of 4 elements in 3 groups with 10 aperture blades. The minimum aperture is f/22 and the filter ring is 48mm. Canon says the weight should be 370 grams whereas my lens is 383 grams. I have no idea why the discrepency. 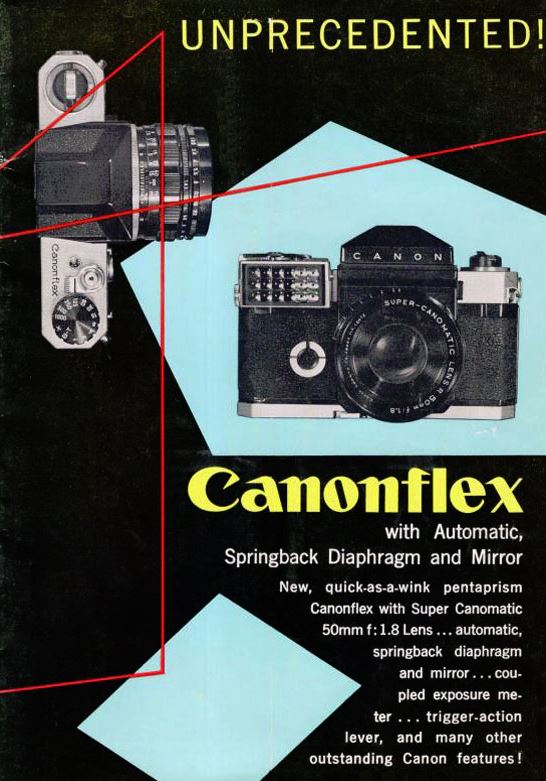 The R 135mm F/3.5 I is shown on Page 14 of this Canonflex Brochure from Canon as one of the lenses available for the Canonflex system.. 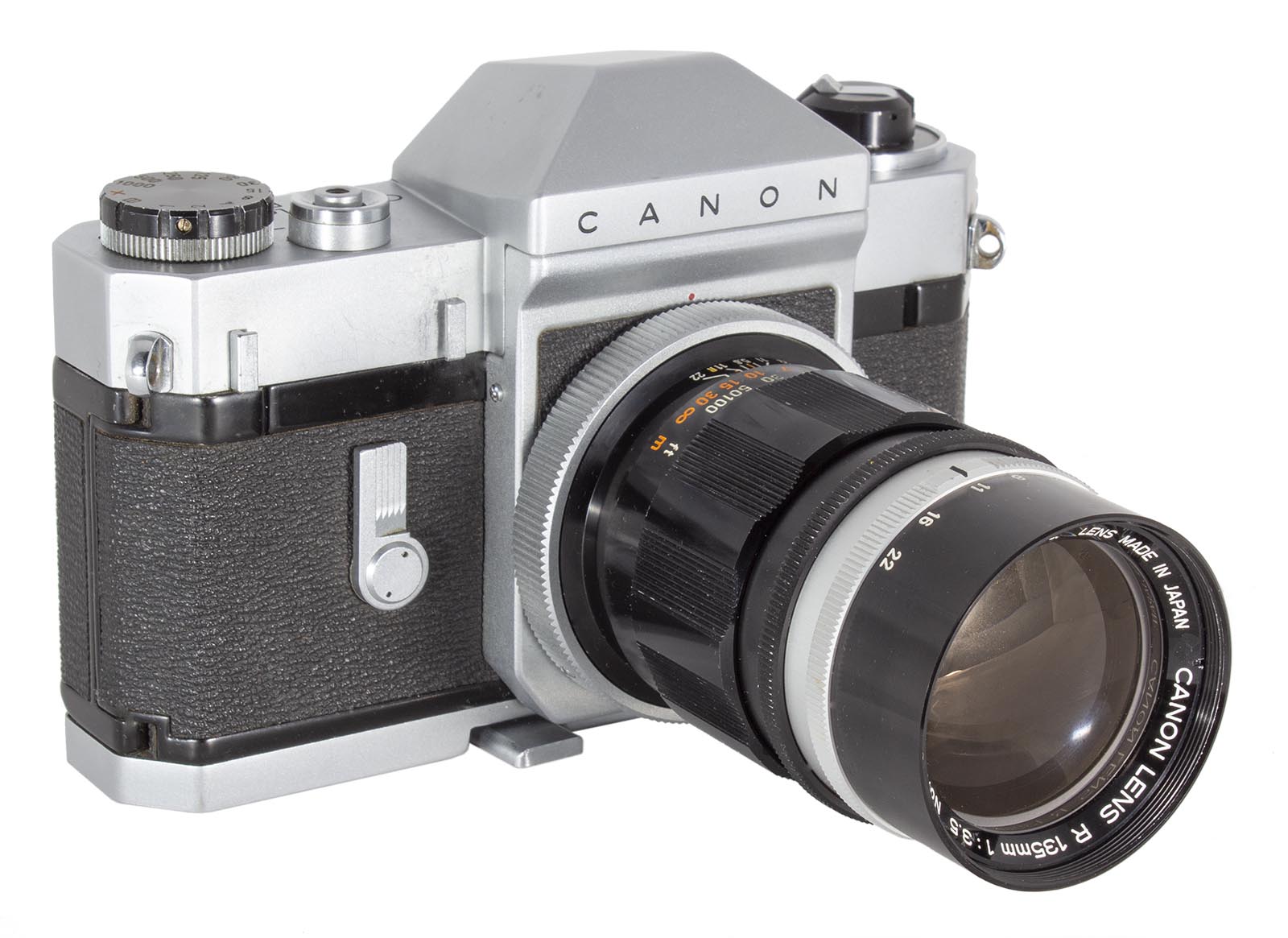 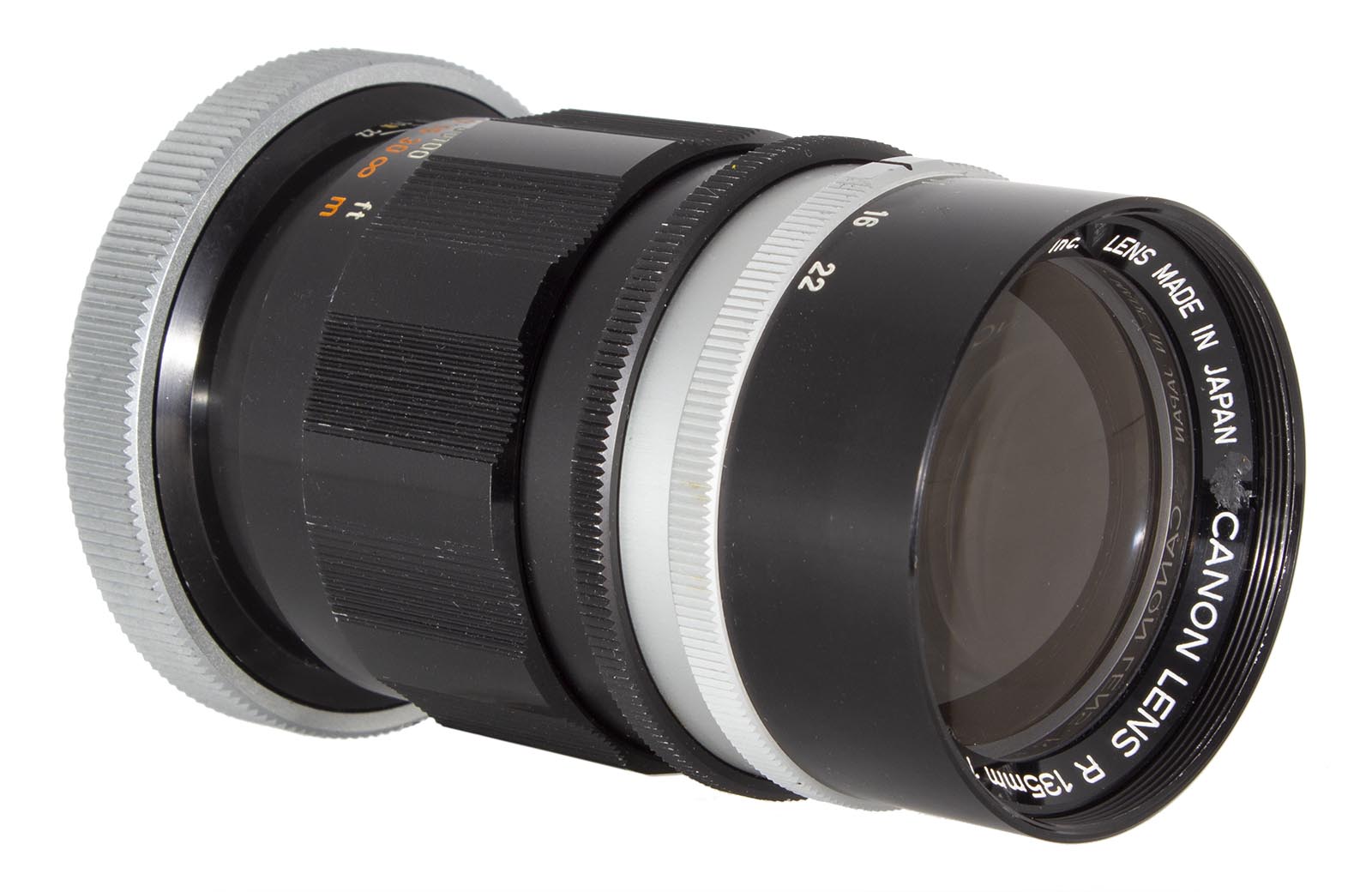 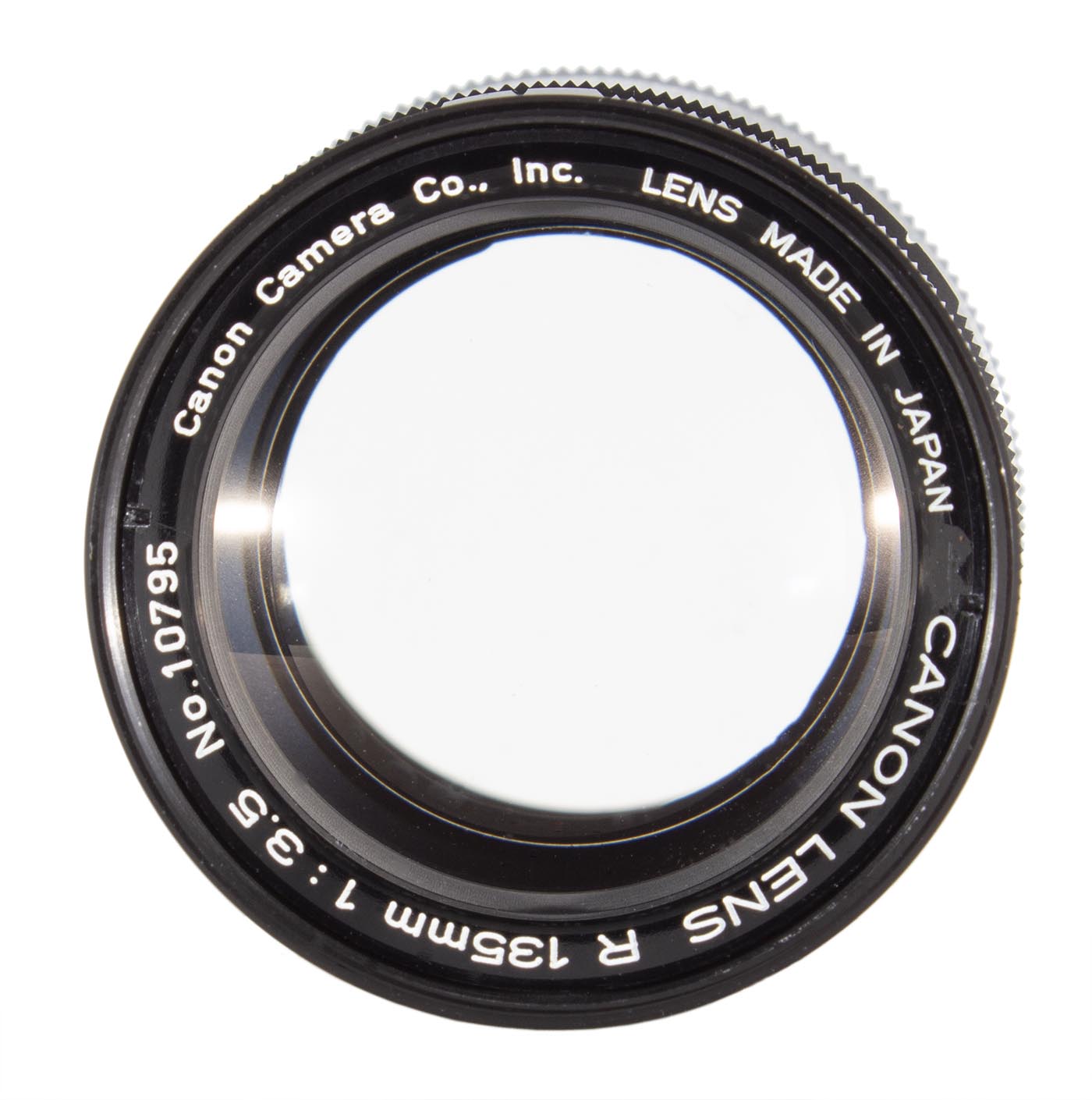 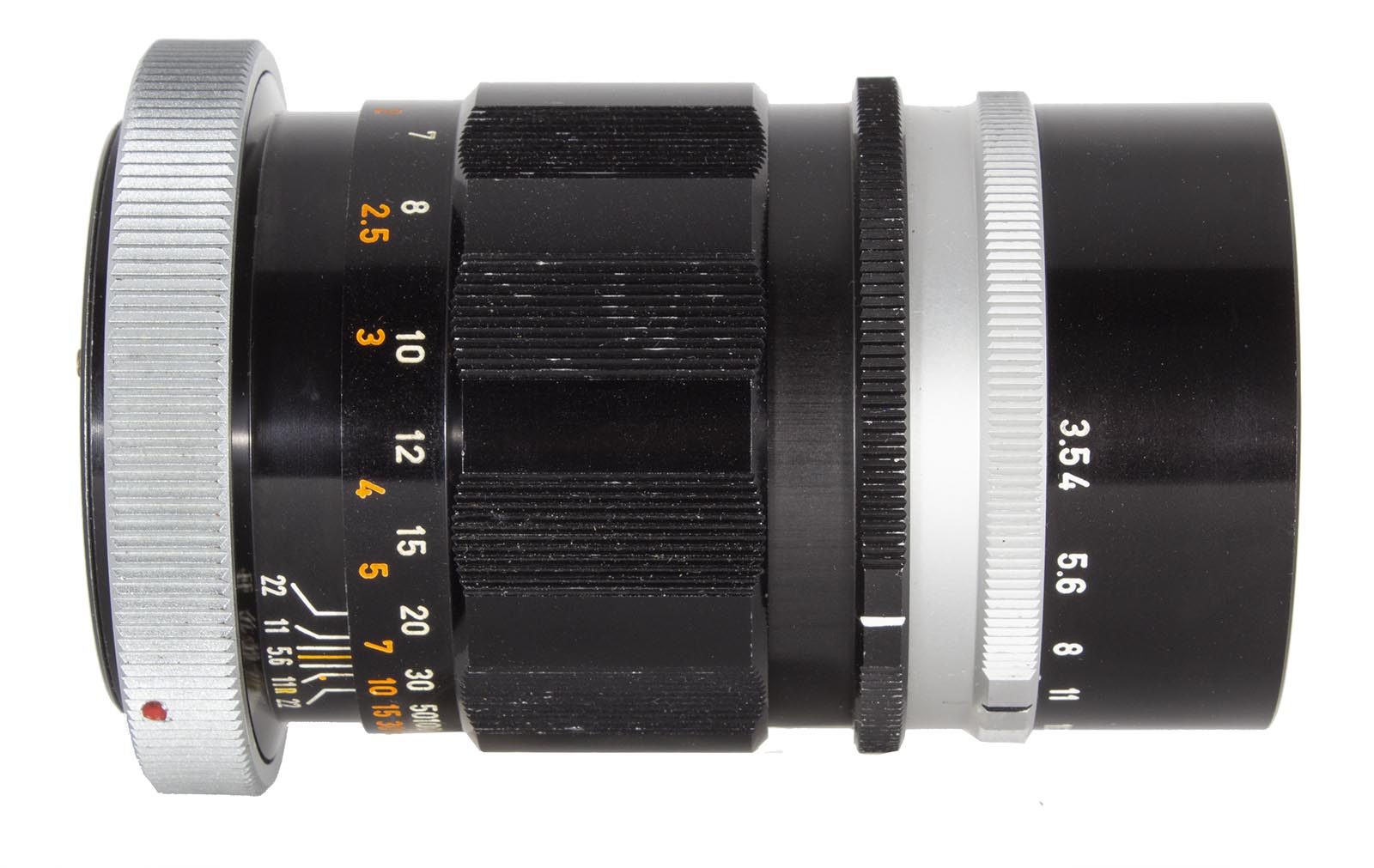 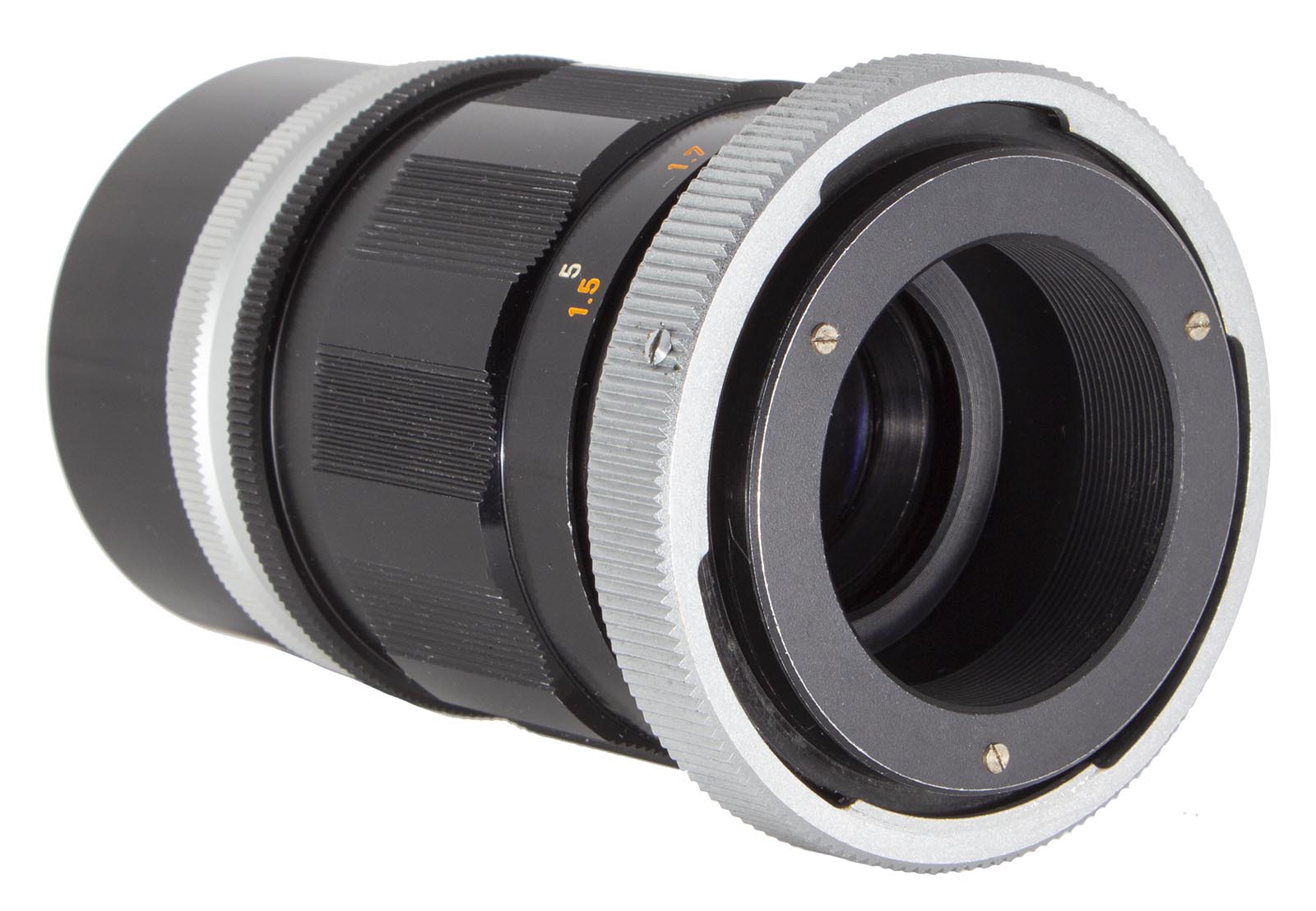 In July of 1961 Canon introduced an updated version of the 135mm f/3.5 lens. It most respects, and in the description in the Canon Museum, it appears to be the same lens.

Well, I have actually used the first version to take pictures and it is a frustrating lens to use. The whole lens barrel turns when you focus and with it the aperture ring turns. This means that when you set your aperture you disturb your focus. So you have to focus after the aperture is set. This works on a rangefinder camera because you are not focusing through the lens. Stopping down has no effect on the brightness in the viewfinder.

However, when you focus on an SLR you want the lens wide open because you are looking through it and the brighter the image the easier it is to focus. But if you focus and then set your f/stop you stand a good chance of disturbing your focus setting. As you turn the aperture ring, if it is stiff at all, the whole barrel turns which changes the focus. I have tried this and it is very annoying.

Well, annoyed customers are bad for marketing. So the solution Canon came up with was to stop the front of the barrel from rotating when to turn the focus ring. They then added a second ring next to the aperture ring which could open the aperture or close it to the setting on the aperture stop ring.

An added benefit was that you could use this ring to check your depth of field at the chosen aperture.

The description of the lens build in the Canon Museum is the same as for the first version, 4 elements in 3 groups, 10 aperture blades, minimum f/22, 48mm filter ring. But again, Canon gives the weight as 350 gr. but mine is 363 gr.

I believe the lens is identical optically and the changes are concerned only with the operation of the lens.

So how does it Perform?

Well, that is all very interesting, but, is this lens any good? Well, it is a Canon lens so I was expecting great things. And I was not disappointed! You will recall that I said above that I had actually used the Version I of this lens and in fact it was in preparation for this page.

I attached the 135mm f/3.5 (I) to my Canon R (I love that camera!) and took some pictures. The weather was cloudy dull so I stood on the front porch of our house and took a few images.

The problem encountered was the need to focus wide open and then set the aperture. I had to be very careful not to disturb the focus while I did that. I took images at f/3.5 and f/8.0 to get an idea of how this lens performed. So, lets have a look. 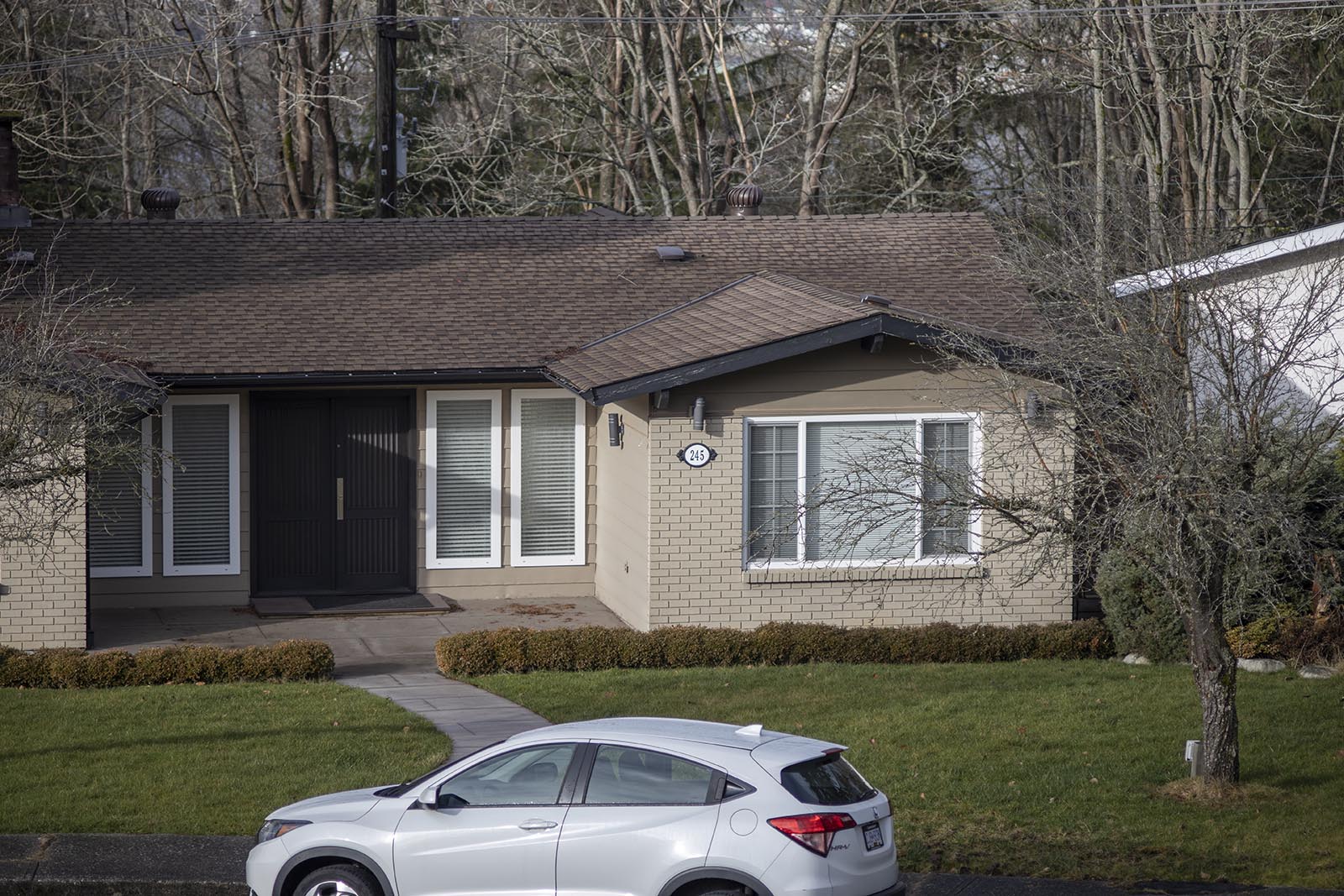 This is the house across the road. I use it all the time testing lenses and my neighbour must think I keep them under sureilance. One of these days I must tell them what I am doing! This is the full frame image at  f/3.5 and everything looks sharp. 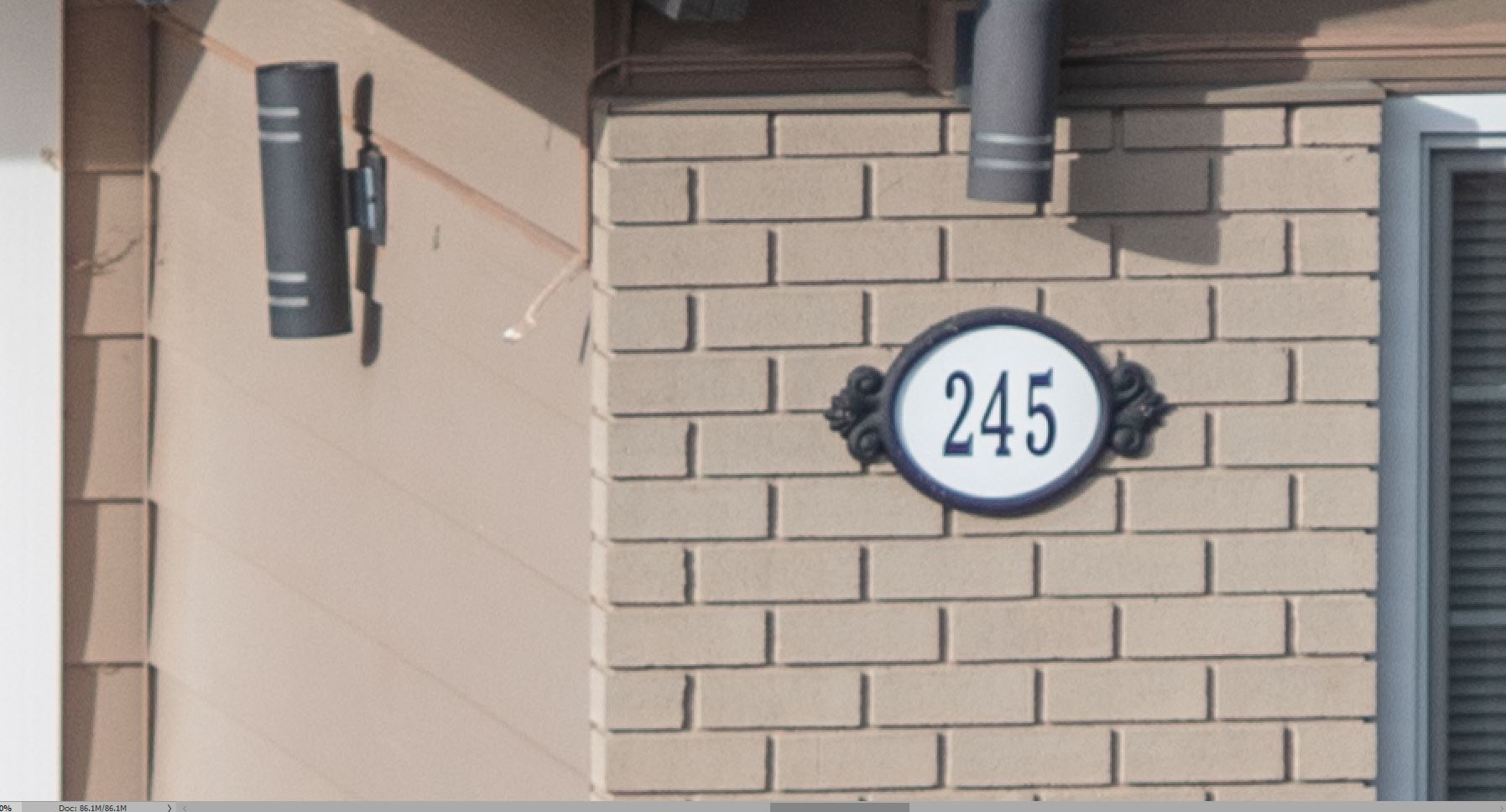 Zooming into the center at 200% the image is sharp even though we are almost at the pixel level on a 30 mpx sensor! 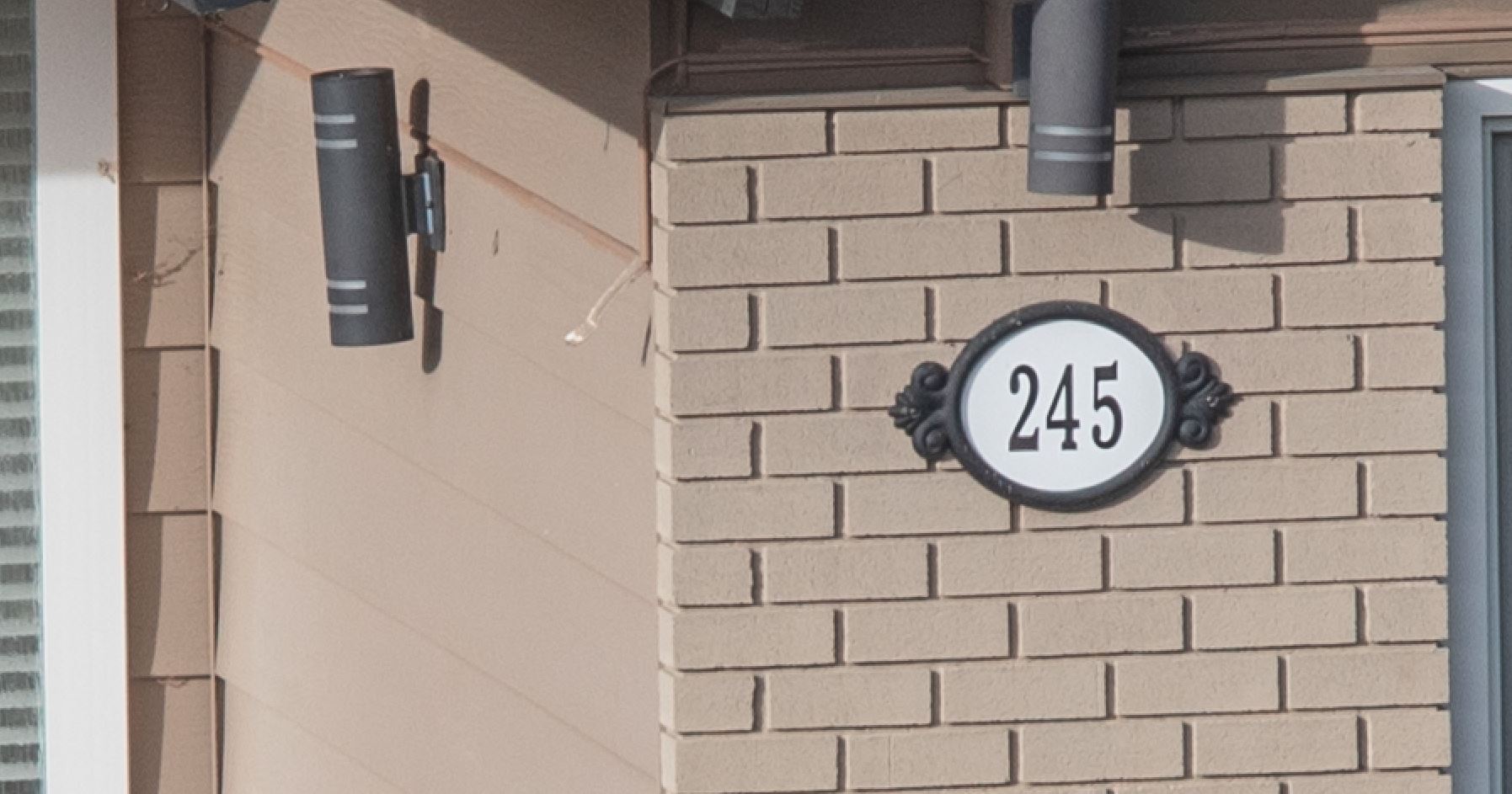 Stopping down to f/8.0 and zooming in to 200% does tighten things up a bit. There is no question that this lens is a performer. 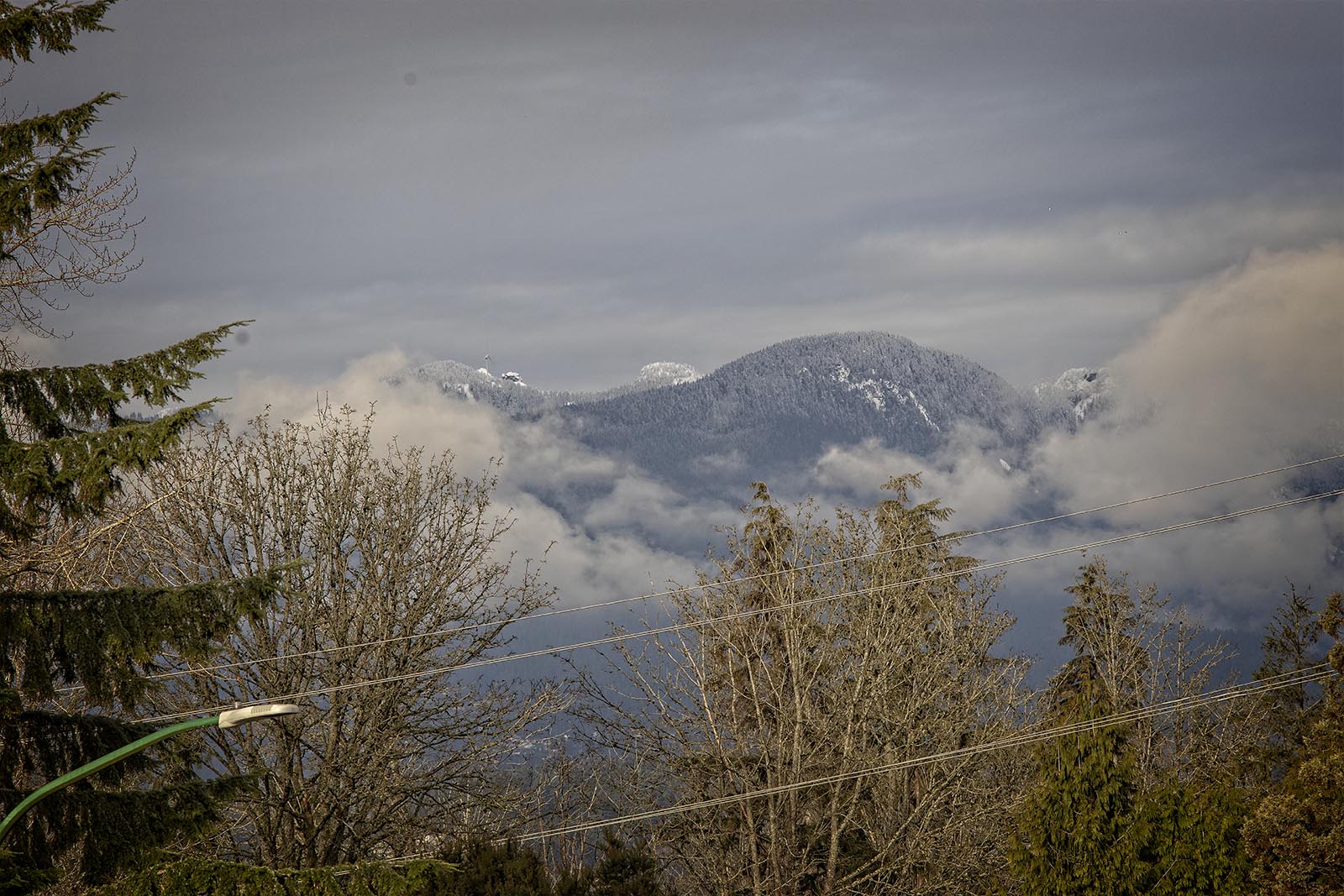 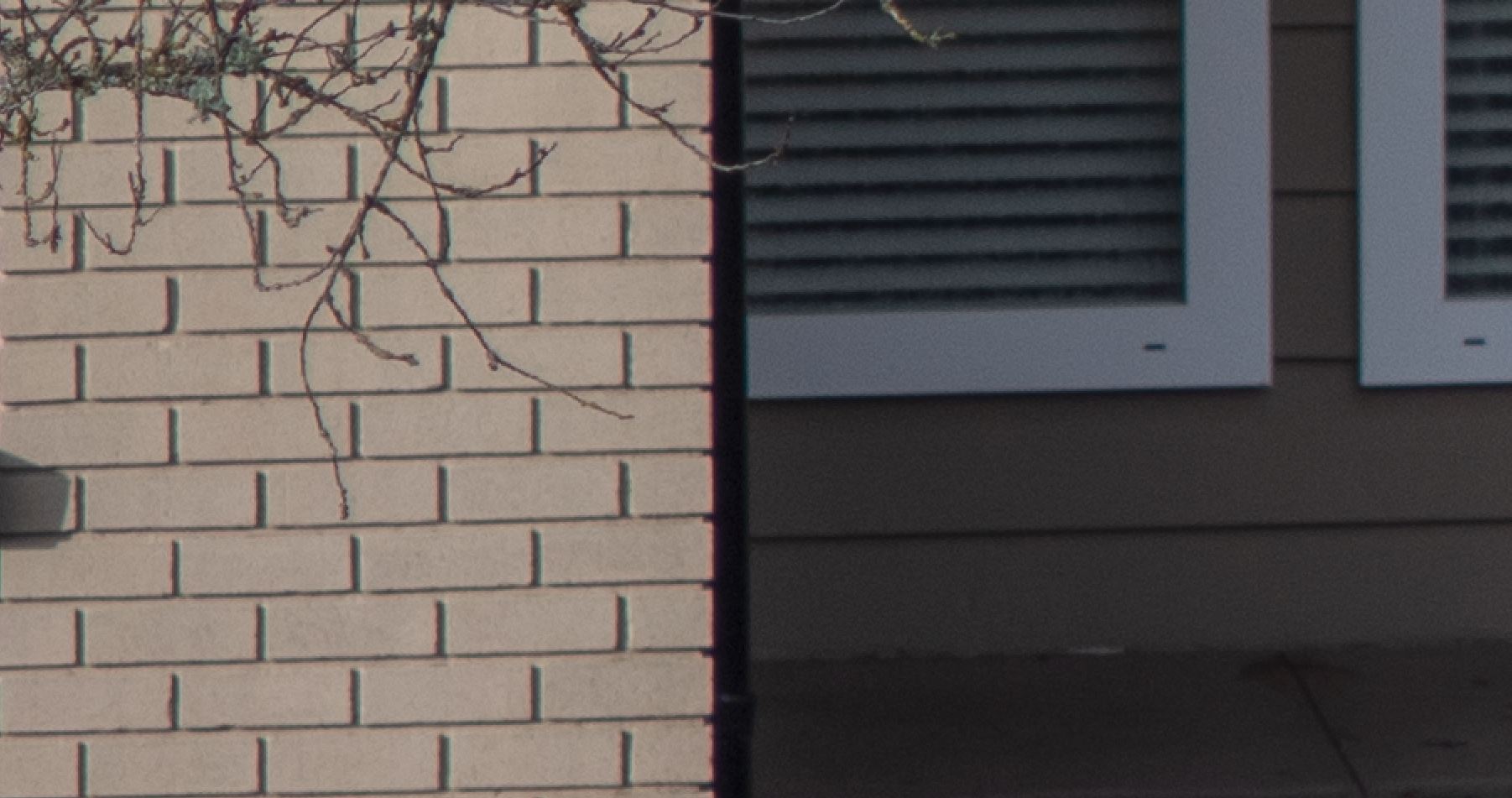 Going to the left edge of the image it is still sharp with a very little color fringing. Sharpness has suffered a little but it is pretty good. 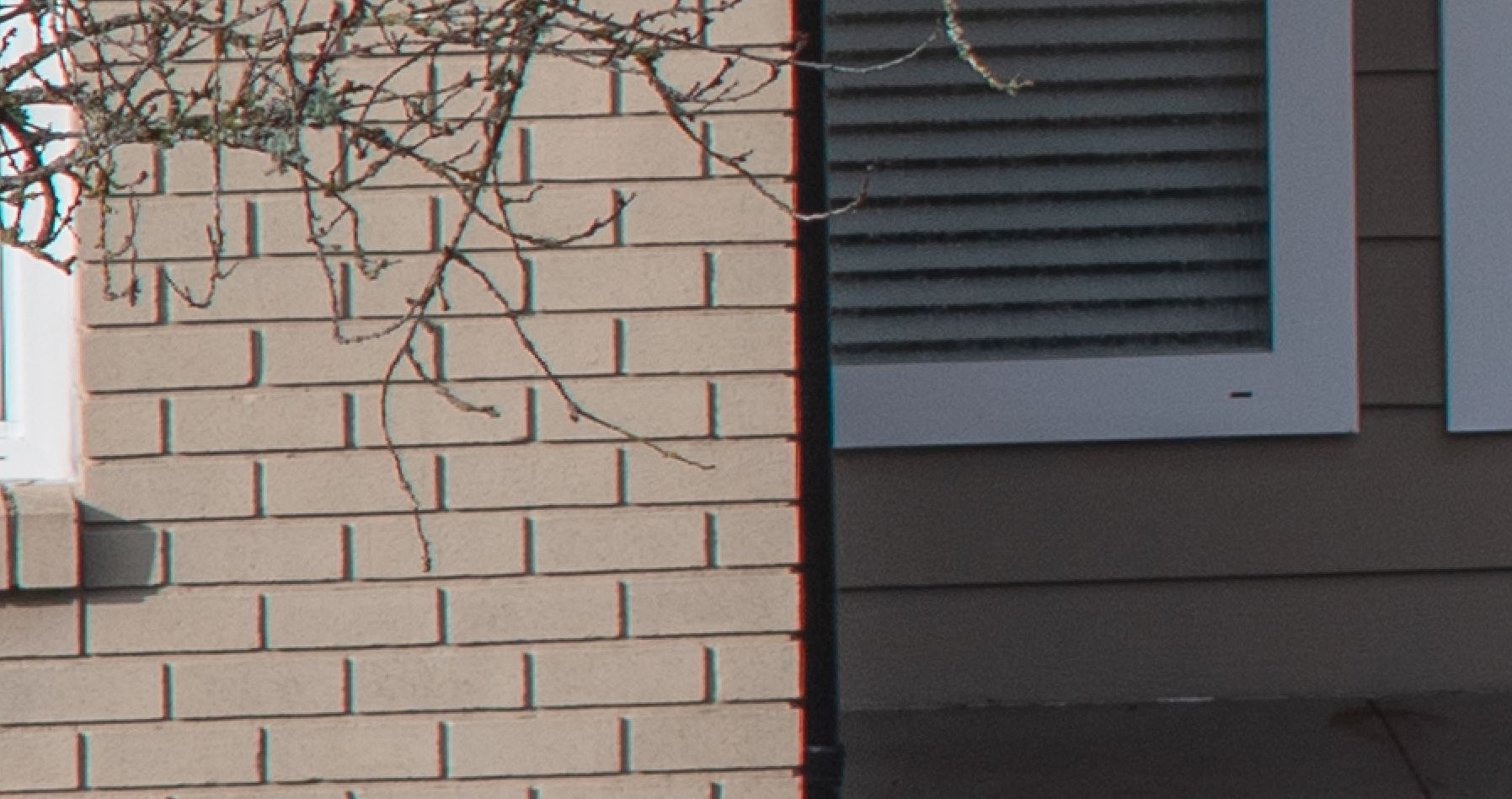 On the edge of the frame the camera picks up a bit of sharpness but it was already pretty good. I think color fringing is a little worse.

So let’s just take a picture with it. If we look down the street from our porch we see the scene on the left. We see more than that but this is a telephoto lens after all.

Now, to get a nice image out of this we have to zoom in a bit. And I have processed it, including sharpness, unlike the pictures above which are not sharpened. But this lens does not let us down.

Below is the image I have pulled out of the center of this picture. The lens was set at f/8.0 and ISO was set at 200. I am actually surprised by it considering the overcast day and the degree of magnification.

This is a great little lens and on my Canon R it takes a great picture! 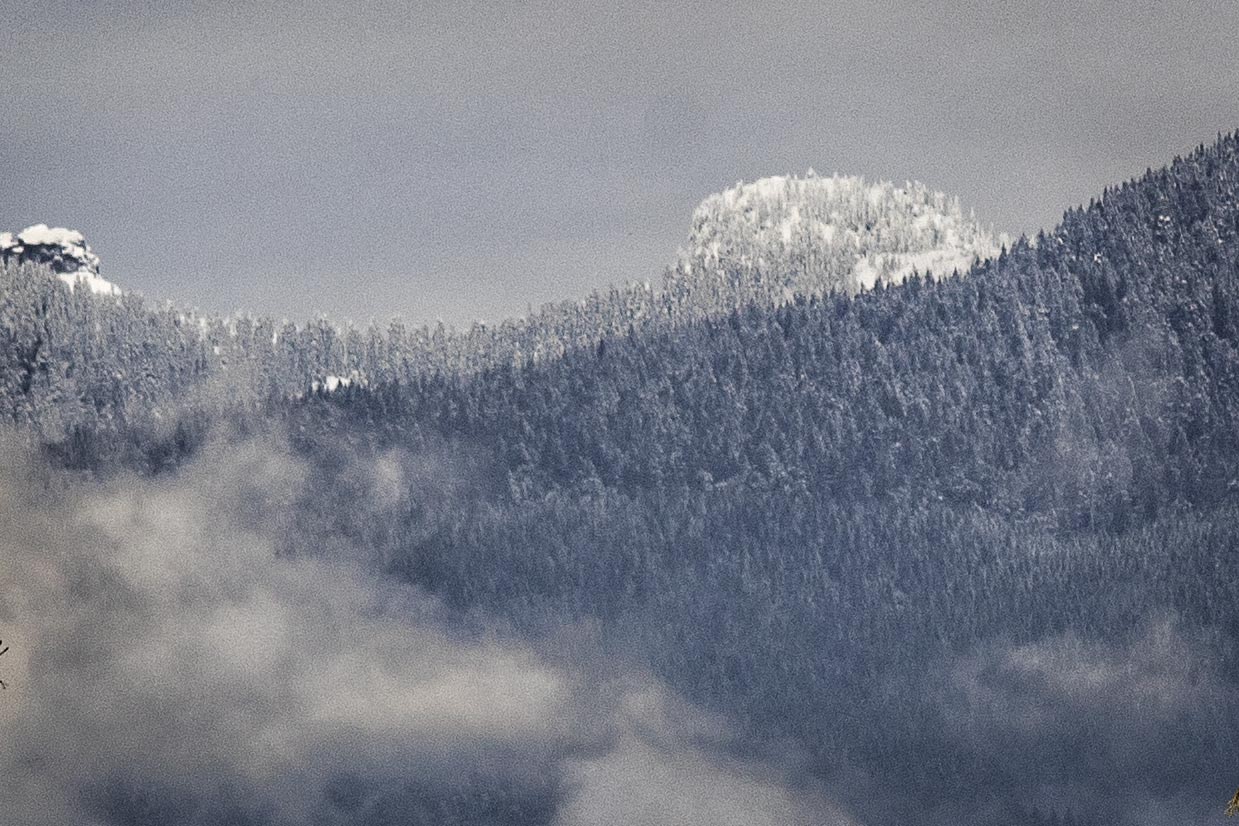