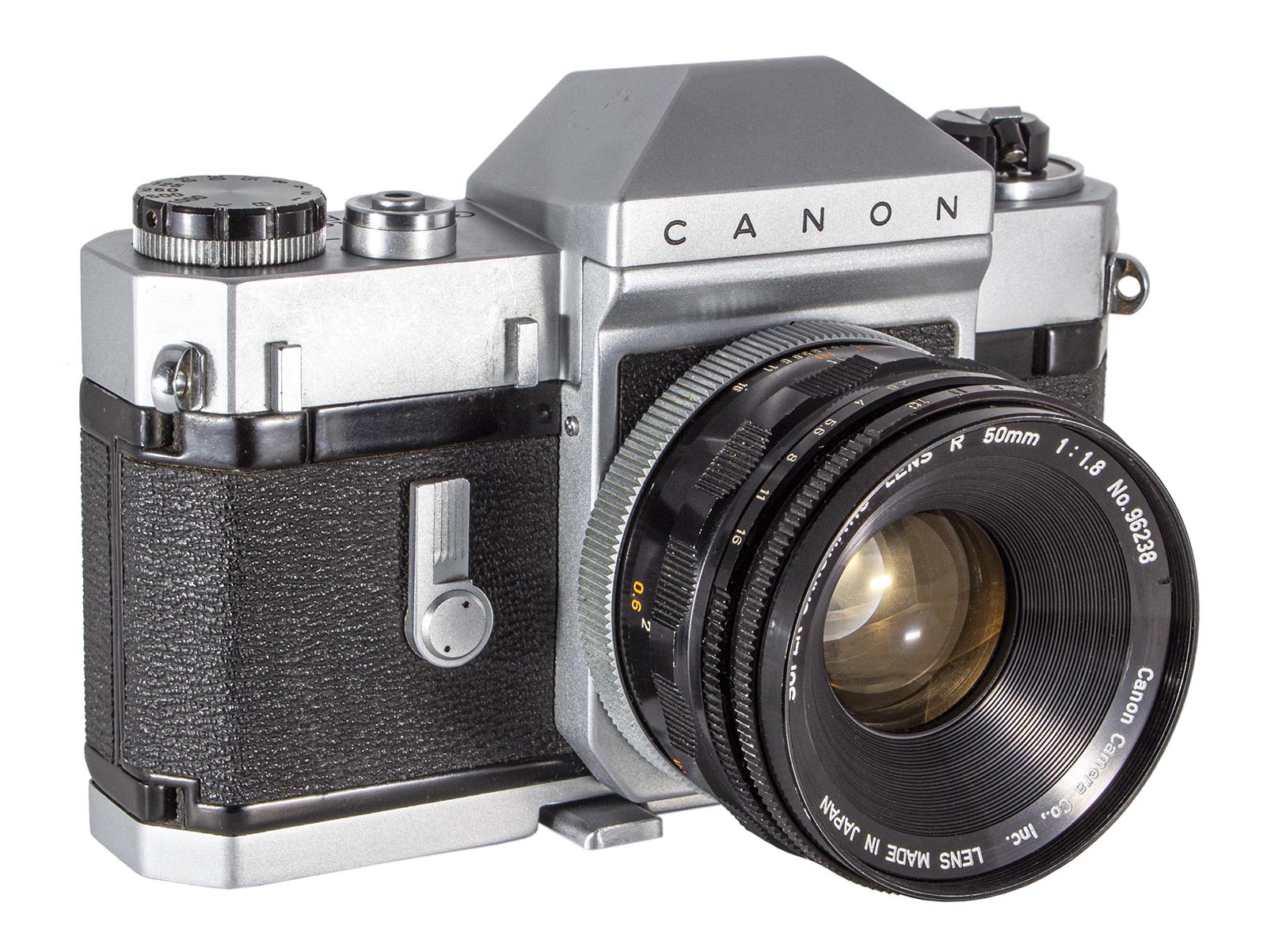 The Canonflex RP is a delightful manual camera. It is solidly built with clean lines and few controls. Simple and functional.

Canon has always created full featured, for their time, cameras and then followed up with an economy version at a lower price to capture a wider share of the market. Such is the case with the Canonflex RP.

The original Canonflex was introduced
in May of 1959 and less than a year later, in September of 1960, they brought out the RP. It was a Canonflex simplified and less expensive to produce, but, a Canonflex nonetheless. 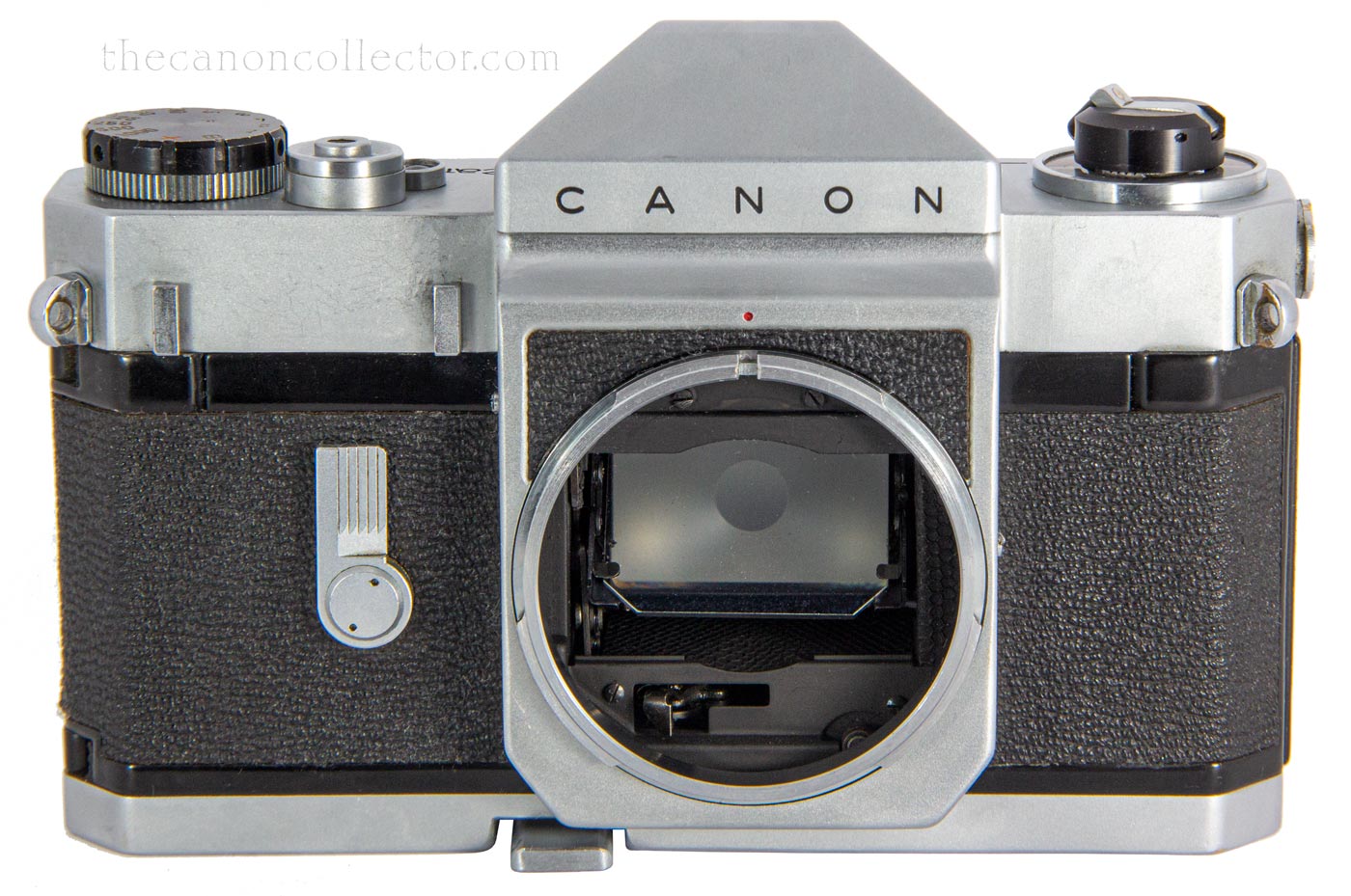 On the left of the picture, below the clip-on light meter mounts, is the lever for the self timer, unlike the circular key on the Canonflex. 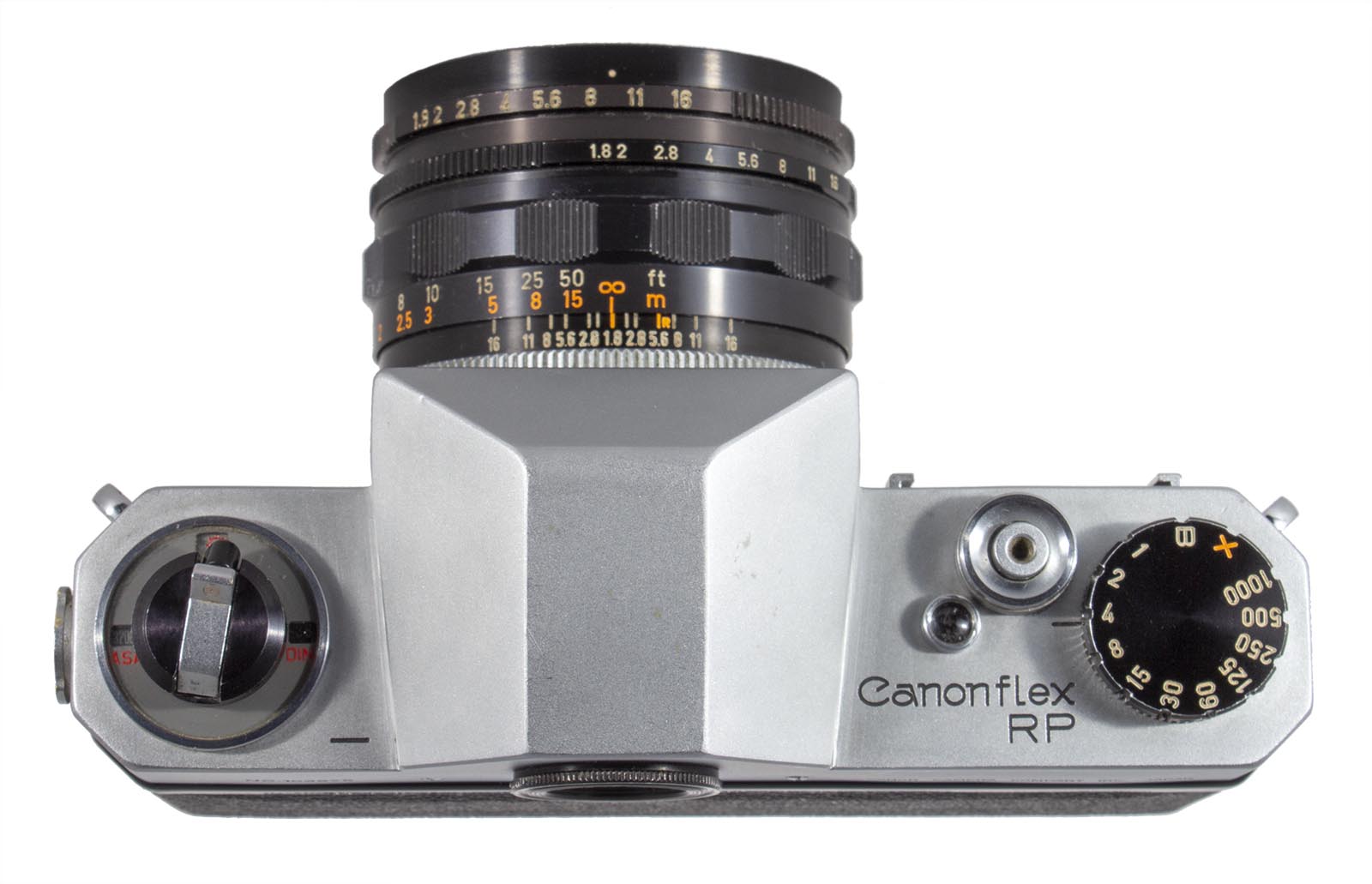 The one piece top deck has no shutter lock and the lack of thumb lever film advance and accessory shoe is obvious. 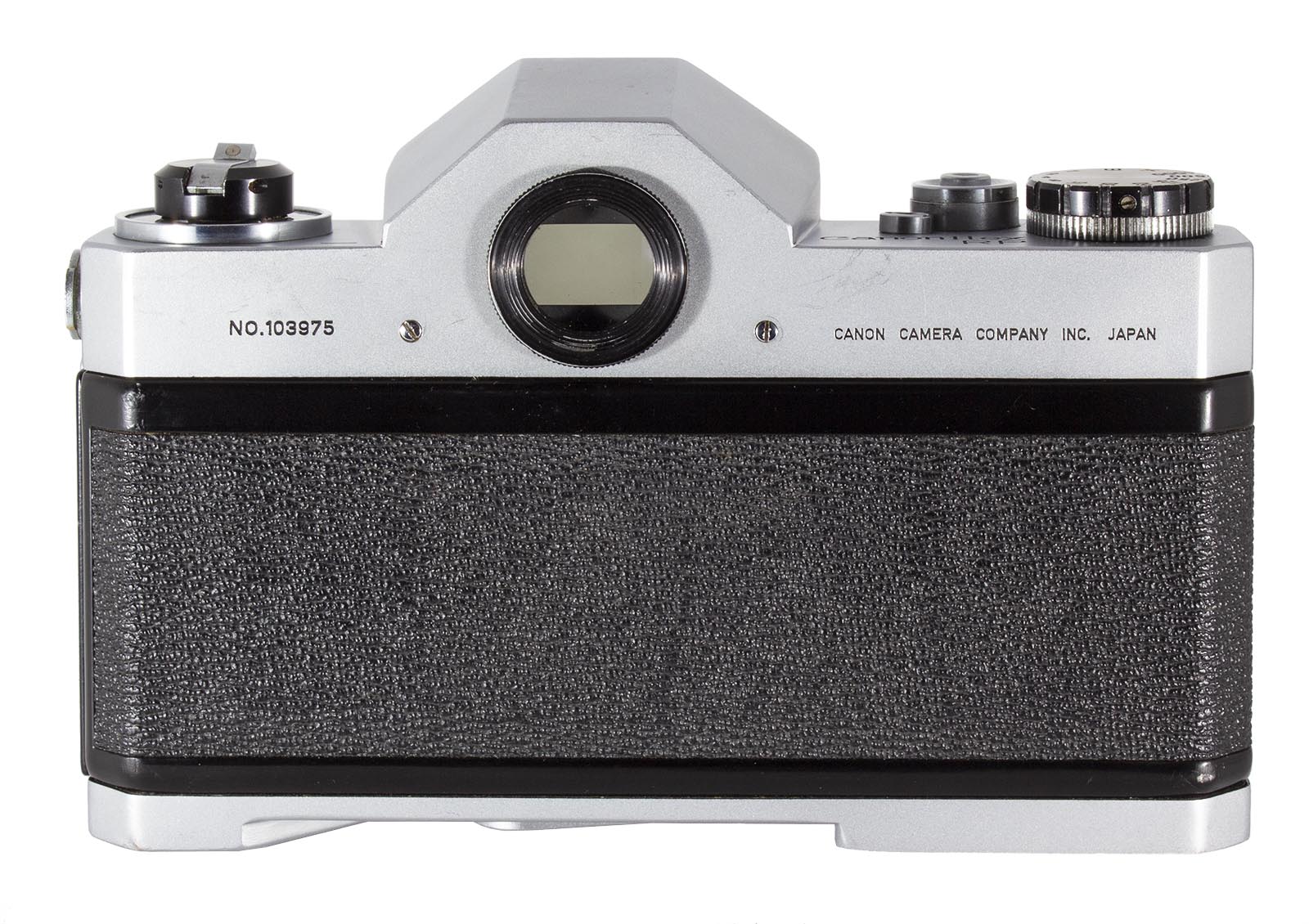 The lack of thumb lever film advance is obvious in this image from the back of the camera. Also there is no accessory shoe.

From the left we have the key lock for opening the camera back, the film advance trigger, the ratchet release for film rewind and finally the tripod socket. 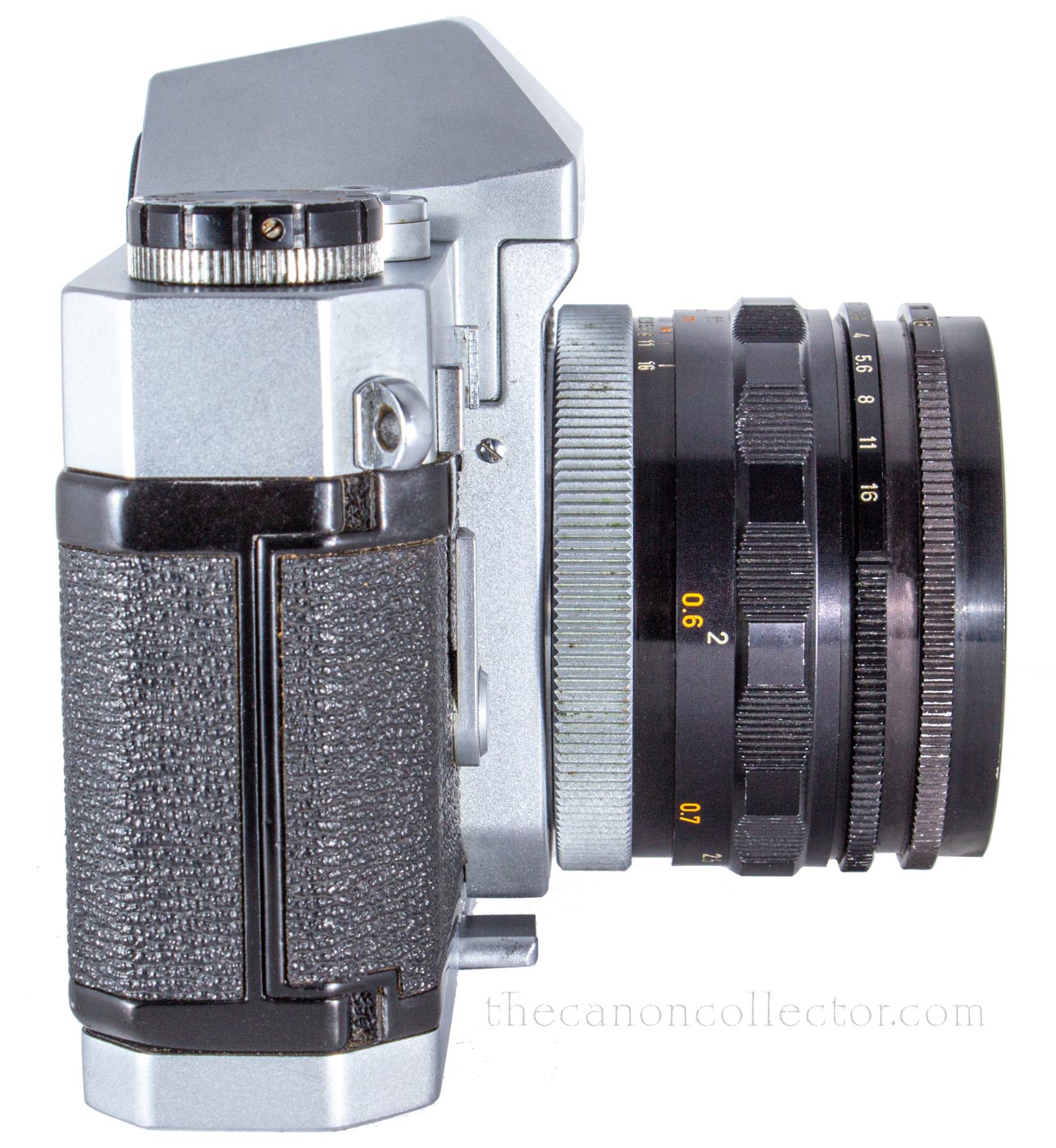 From the side the locking ring of the new “R” mount is visible on the back of the kit 50mm lens.

The most obvious change in the RP is the non-removable silver prism housing. The RP lacks interchangeable view finders. On the Canonflex the top deck is actually in two pieces but on the RP it is one piece all the way across the top of the camera.

The other changes are minor. There is no shutter lock around the shutter button as there is on the Canonflex. The focusing screen is a simple ground glass whereas the Canonflex has a split image. And finally, the self timer is operated by a simple lever on the front of the camera rather than the attractive round key that is found on the Canonflex.

There is one other very minor difference that must have saved considerable time in assembly of the camera. If you count the individual pieces of leatherette on the body of the RP you will find 5. And they all had to be mounted by hand, I am sure.

However, count the leatherette pieces on the Canonflex. If you include the standard prism view finder there are 14  individual pieces. This makes the camera look luxurious but can you imagine how long it took to put those on?

The standard lens for this camera was the same R 50mm f/1.8 as on the Canonflex. 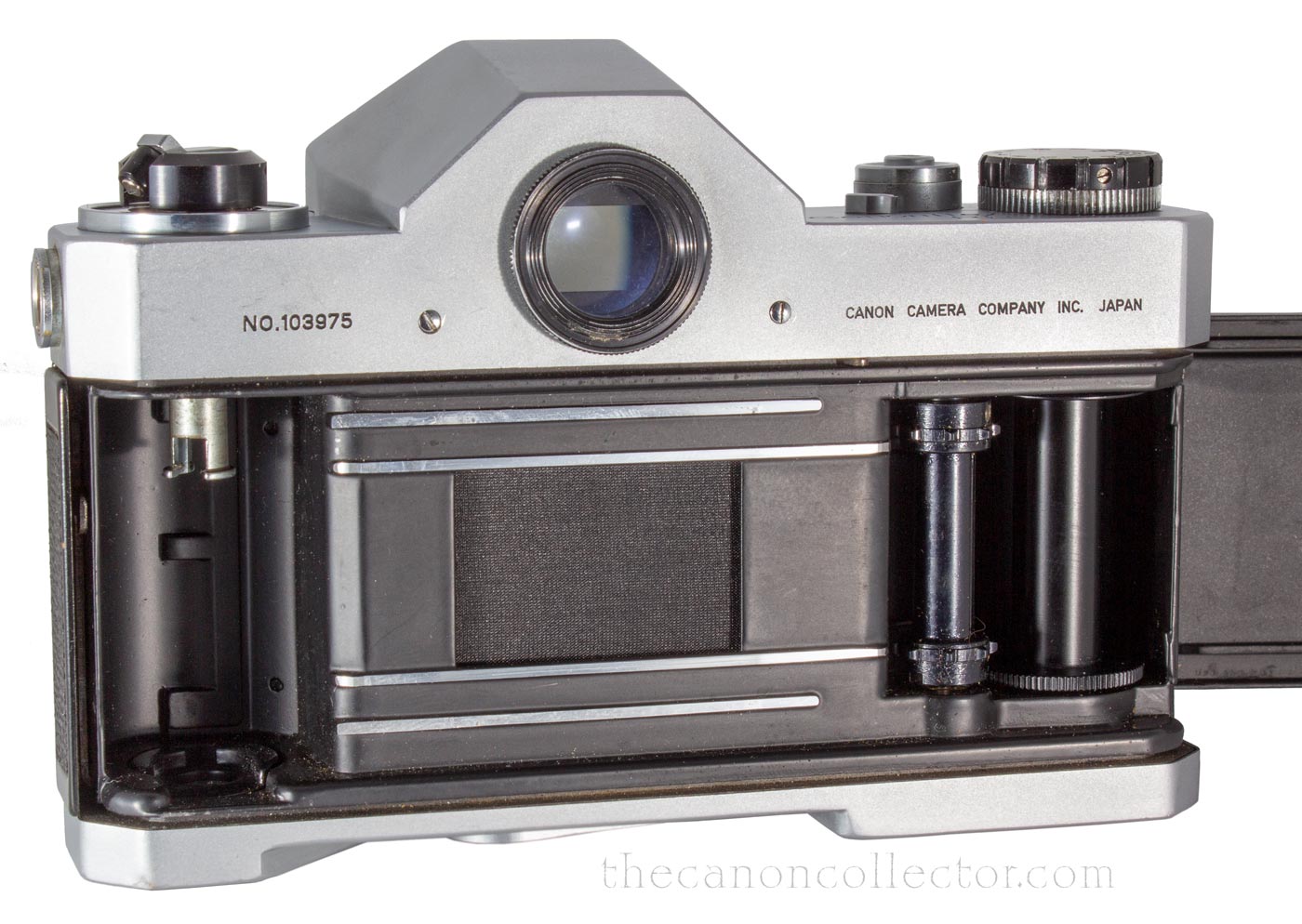 The RP inside looks like every Canon SLR until the coming of the digital cameras. 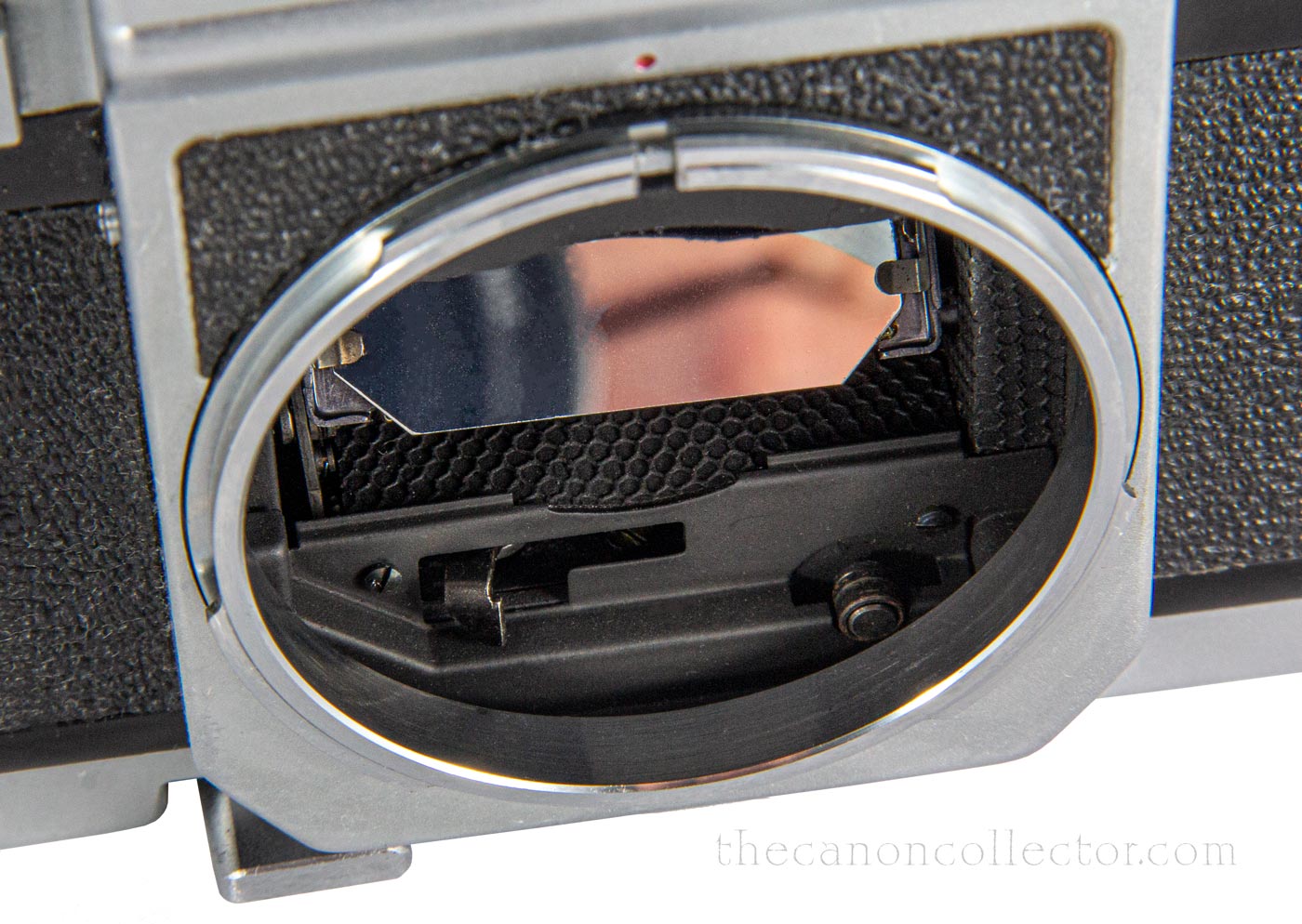 The use of the Clip-On Canon-Meter R is fully described in the RP Manual below and I have discussed it on the Clip-On Lightmeters Page. Lots of photographs showing how it goes on.

I found a website that says only 8000 RP’s were made, all chrome finish except for just 75 finished in black with matching all black R 50mm f/1.8 lenses. Now this would be a nice collectible to have!

One final comment: this camera is a tank! It is large and heavy and feels very durable in the hand. I do not care for the design as much as I do for later Canon SLR’s such as the F-1, EF or A-1 and I definetly prefer the design of the AE-1 but those cameras lie in the future.

In the Collection I have: 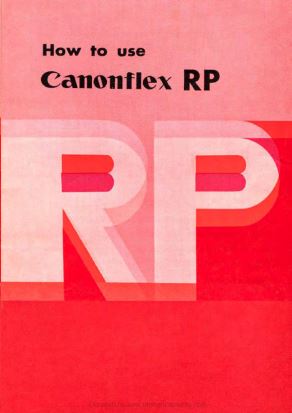 Detailed instructions for operating the RP are found in the instruction manual which came with the camera. To open it click on the image. 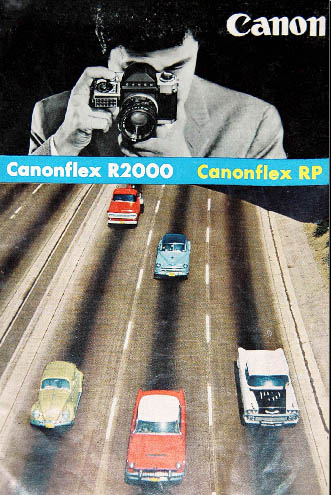 The R2000 and the RP were both very like the original Canonflex and so they shared this brochure from the 1960’s about the Canon “Flex” System.