The Last of the “T” Series 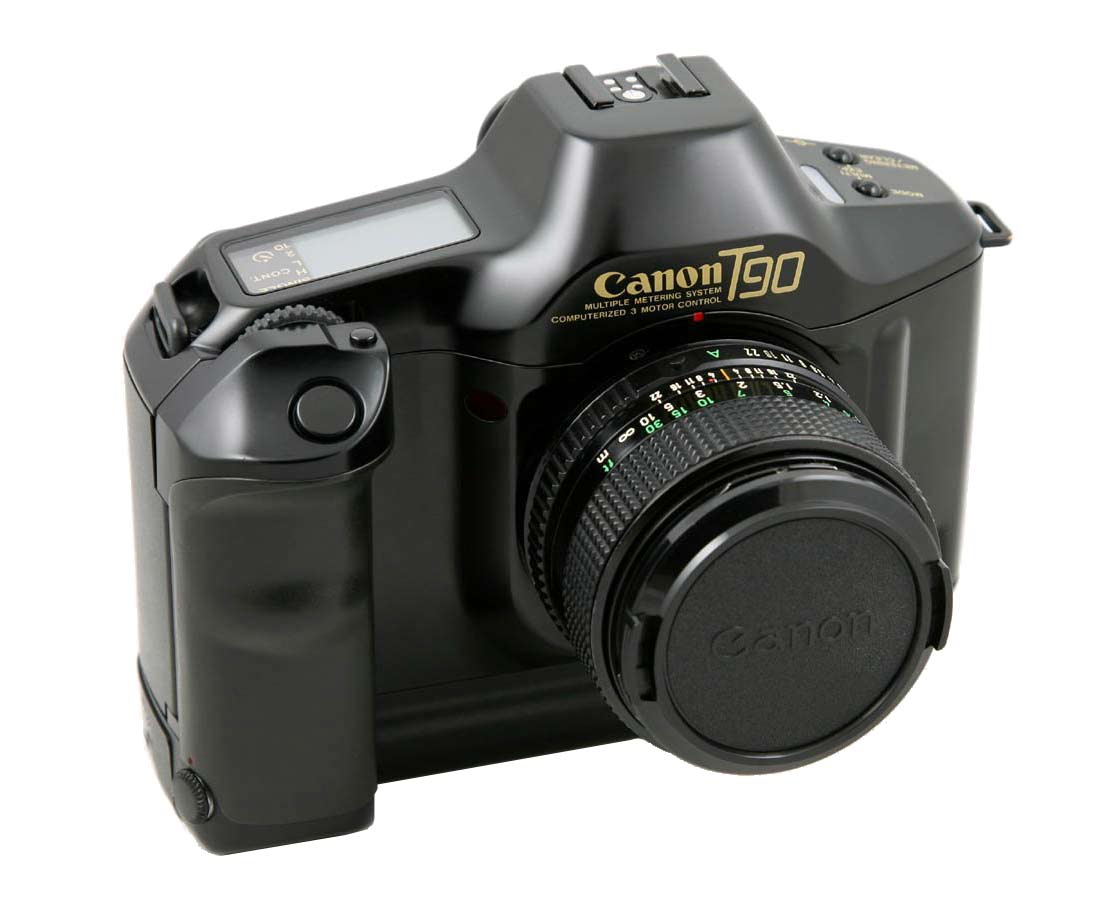 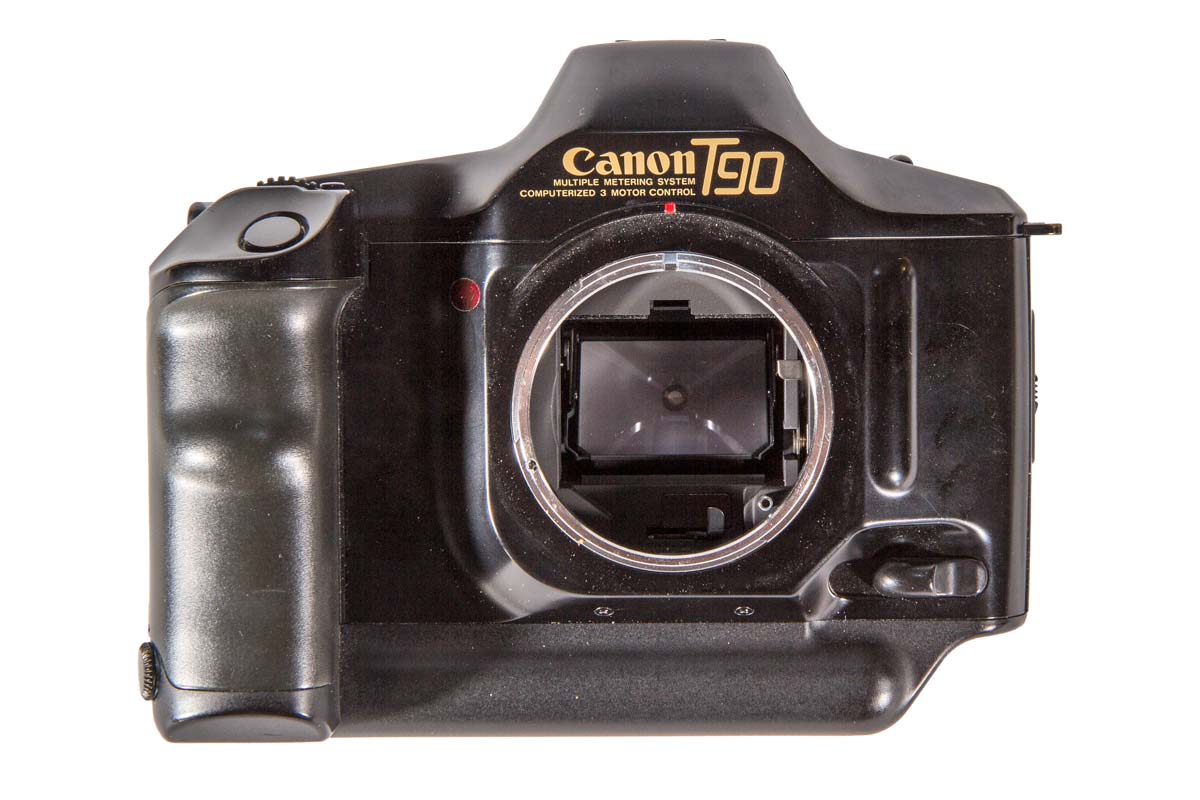 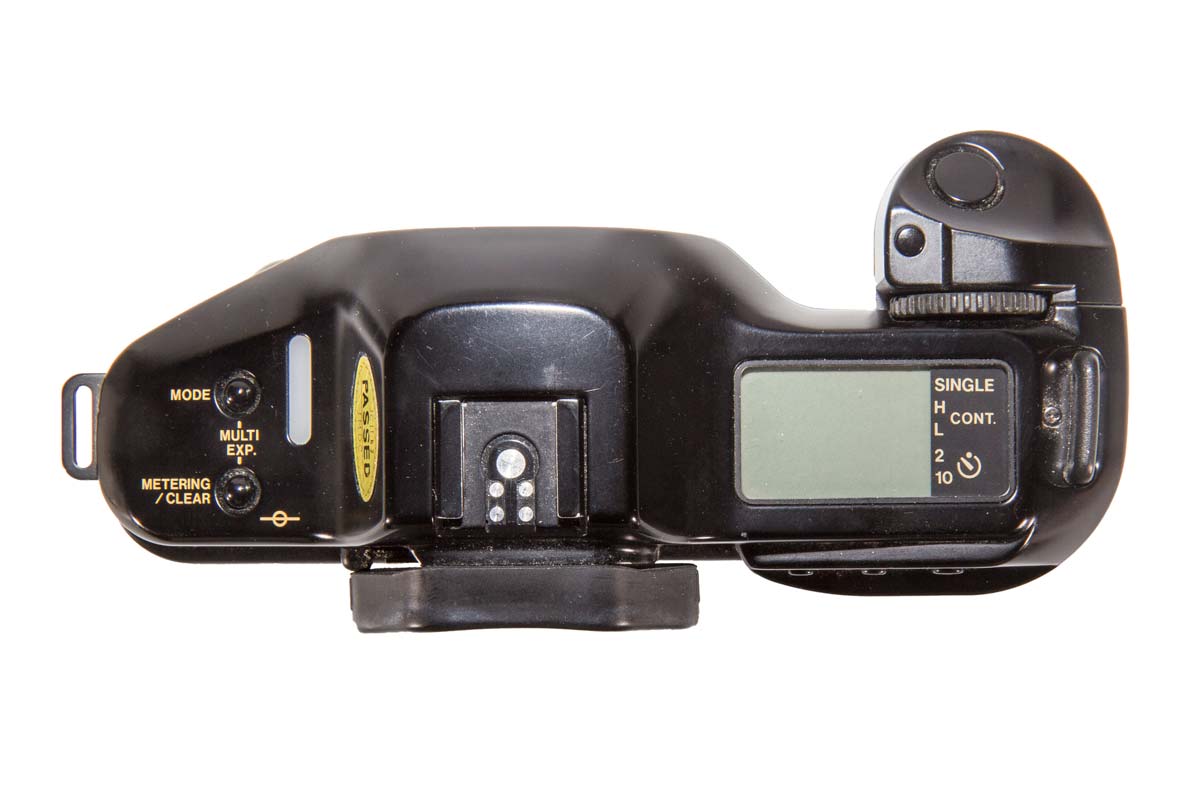 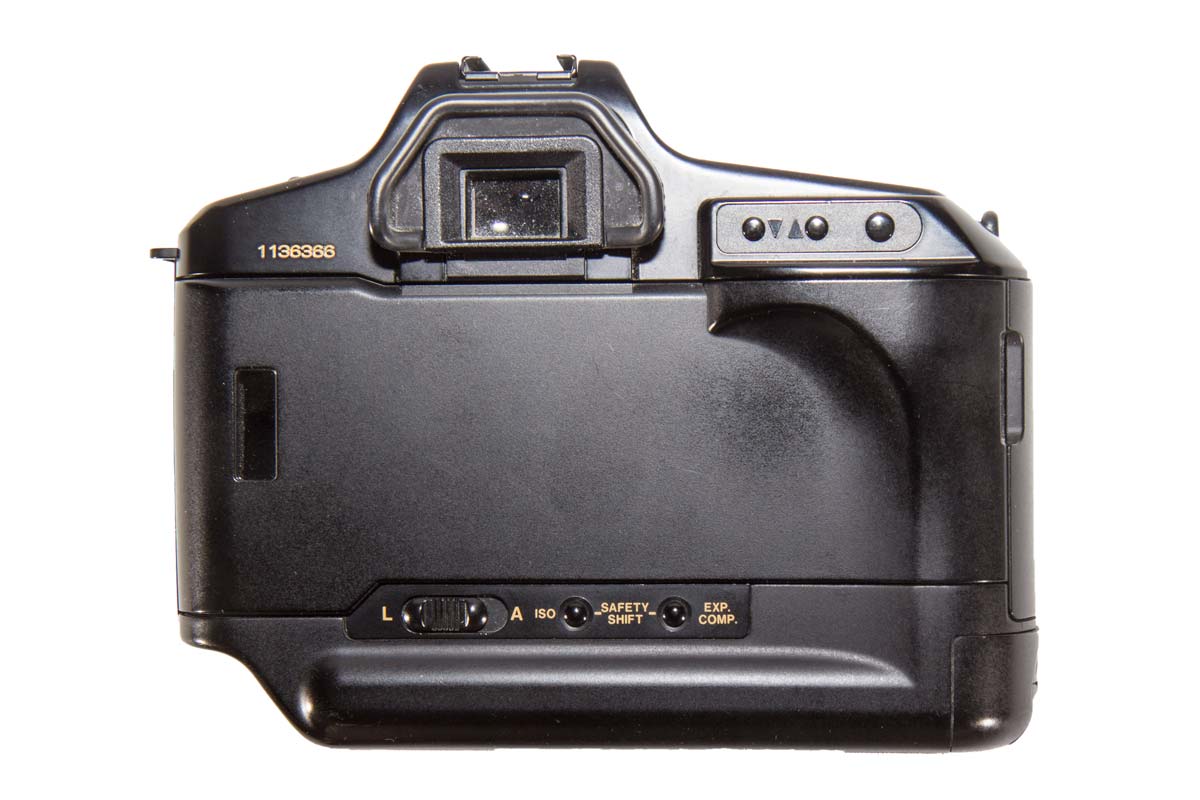 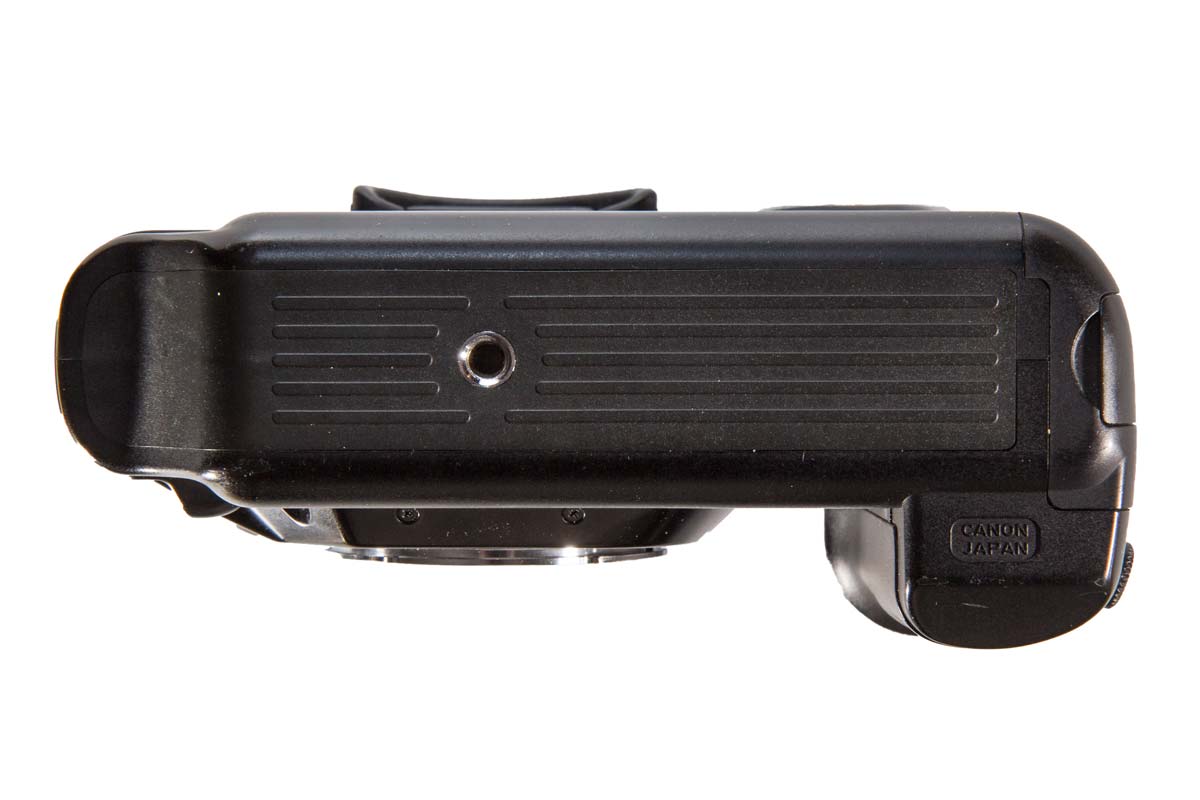 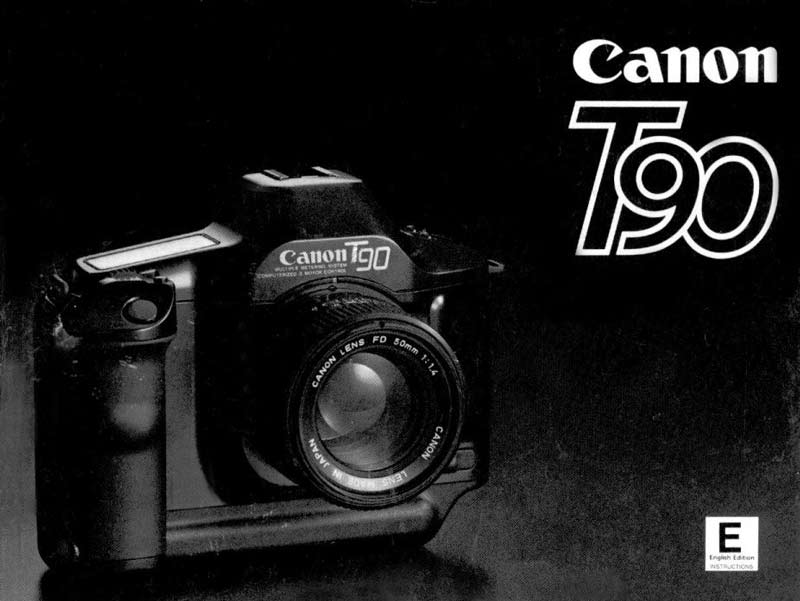 The T90 is a complex camera and to understand how to operate one should really read the manual. 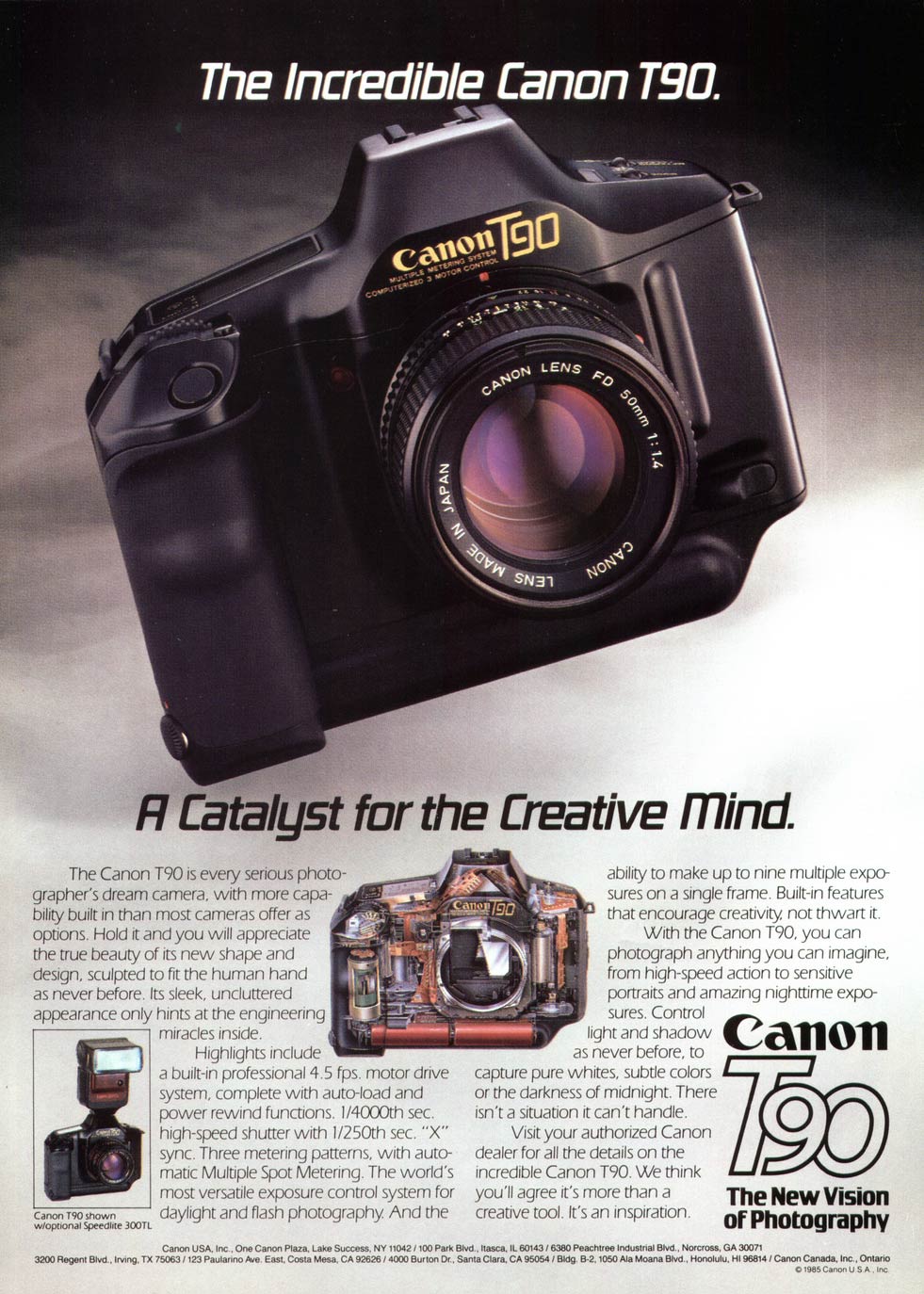 The T90, introduced in 1986, was Canon’s last and most advanced FD mount professional level 35mm film SLR. (Canon did offer a Cosina made T60 model in 1990 with an FD mount but the line was effectively over with the introduction of the T90.) It was, for its time, way ahead of anything else available. From the styling to the electronics, this camera was a milestone.

For the design of the T90 Canon turned to German born industrial designer Luigi Colani. Colani was noted for his smooth curving designs on products from Alfa Romeo and Fiat automobiles, to trucks, television sets, pianos and even ball point pens. He is often quoted as saying “The earth is round, all the heavenly bodies are round, they all move in round or elliptical orbits. … We are even aroused by round forms in species propagation related eroticism. Why should I join the straying mass who want to make everything angular.? I am going to pursue Galileo Galilei’s philosophy: my world is also round.”

This design philosophy is very apparent in the body design of the T90 and in all subsequent EOS cameras. Canon considered his contribution so highly that they presented him with the first production model engraved with his name. In 1986, he received the Golden Camera Award for the Canon T90.

Up to this time features on cameras were largely driven by the requirements of the mechanical linkages the cameras relied upon to operate: the rewind crank, film advance lever, shutter speed dial, shutter release button. These considerations dictated the form of the machine. With the introduction of the T90 these requirements were unnecessary. The controls were either not required, the film rewind crank, the shutter speed dial, the film advance lever, or they were no longer mechanically connected. All was electronic.

As a result the design could conform to the needs of the user, could be easier to control, could be easier to hold. This was bold new thinking. The T90 introduced features that are still in use to this day. The LCD screen, introduced with the T70, was given much more information to display. A control wheel was located behind the shutter release button to work in conjunction with thumb operated buttons on the back of the camera. Canon still uses this design layout.

The camera is powered by four AA batteries and it is totally dead without batteries. Everything is power operated. But there are built in power regulators so that as the batteries drain the camera operates normally. It is either fully functional or dead. There is also an internal lithium battery to power memory circuits. That battery is not user changeable and is expected to function for 5 years and then be changed by a technician.

Shutter is electromagnetically controlled metal focal plane with a top speed of 1/4000th of a second and it can time an exposure up to 30 seconds.

Film is automatically advanced, single frame at a time, or low speed continuous (2 fps) or high speed continuous (4.5 fps). Film loading is automatic as is rewind. A total of three motors are used in this body: one to wind film, a second to power the mirror and shutter, and the third for the rewinder. The control was provided by two CPU’s. The first was the main CPU which was slower and used little power. The second, or sub CPU, ran faster, used more power, and shut down when not in use.

It is interesting that there is no flash socket for studio strobes. At one time Canon offered a retrofit through its service depots. This suggests that they realized they had overlooked this feature in the original design.

Metering modes are center weighted, partial and a multi spot mode. Exposure modes include aperture priority (Av), shutter priority (Tv), program auto-exposure (AE), and a fully manual mode (M). Have a look in the manual for all the details.

For all of its innovation, it was eclipsed by the autofocus revolution and the EOS lens mount system after only a year of production with the introduction of the Canon 650, the first of the EOS line. Handling the T90, although the polycarbonate body feels a little “plastic”, it feels surprisingly like an EOS camera.

These cameras do not function without batteries. And they were famous for the “EEE” or “HELP” error message which usually indicates a sticking shutter. (Apparently there is a washer involved in the operation of the shutter which can become “gummy” with age and cause the shutter to stick and not function. The fault is fixed by replacing the washer.) The LCD panels also had a life of around 5 to 10 years. Canon stopped stocking parts for this camera in 1998 and repair services are now difficult to find.