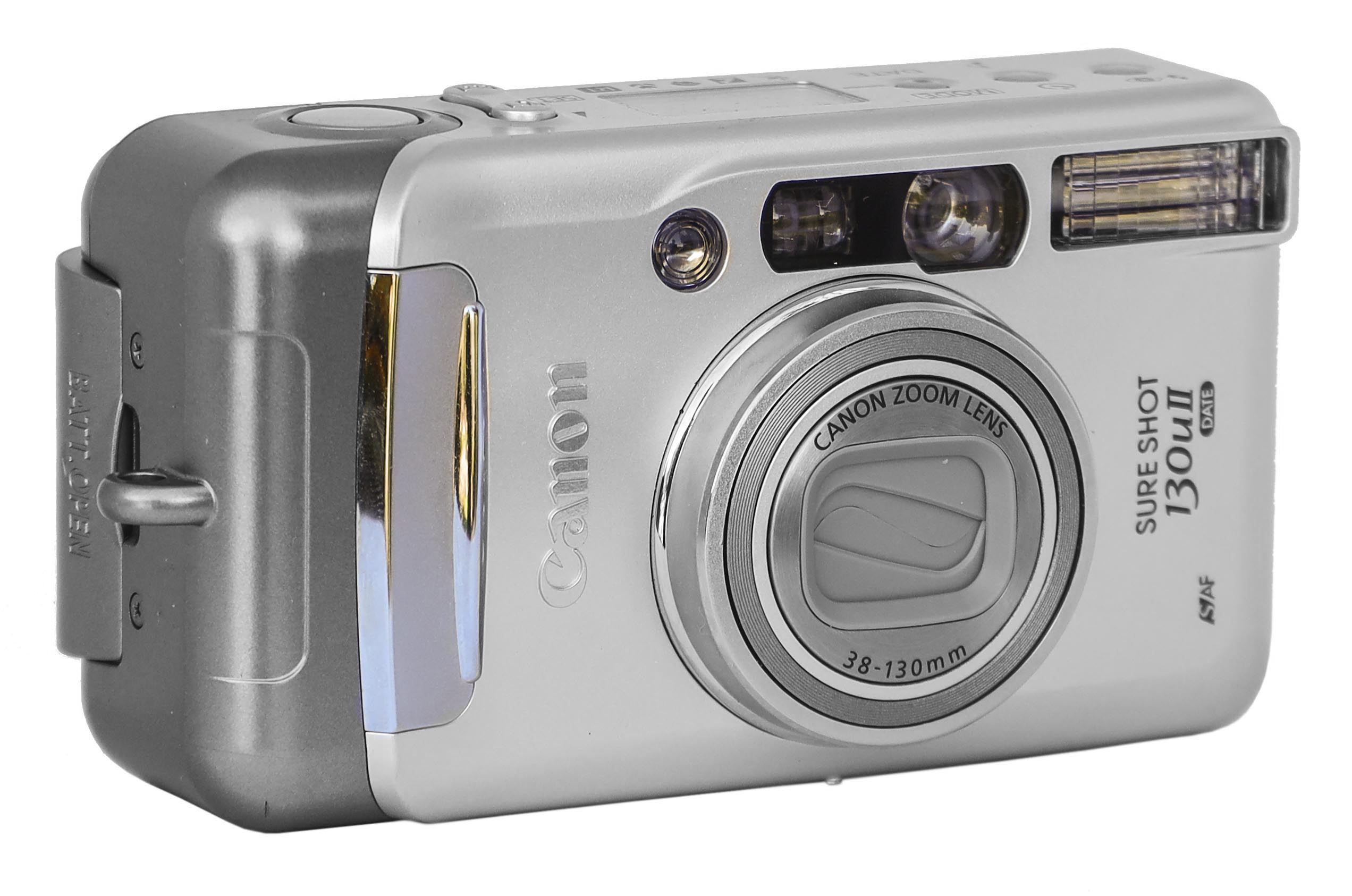 With the lens retracted this little camera easily fits in a pocket or purse or, as I would prefer, in a case on the belt. 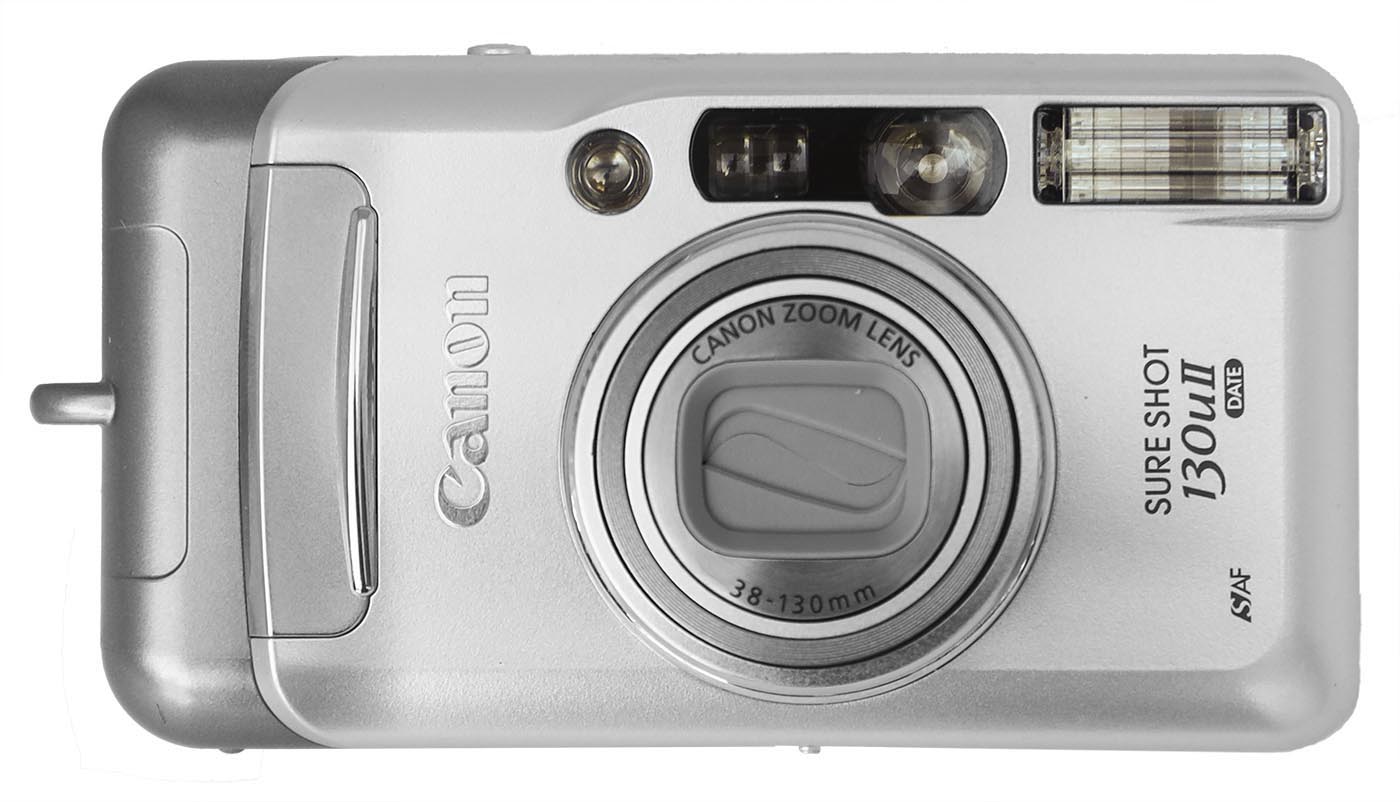 In the upper  left corner is a green light which illuminates when focus and exposure are acceptible.

All of the camera’s controls are on the top deck where they are easily seen and operated. 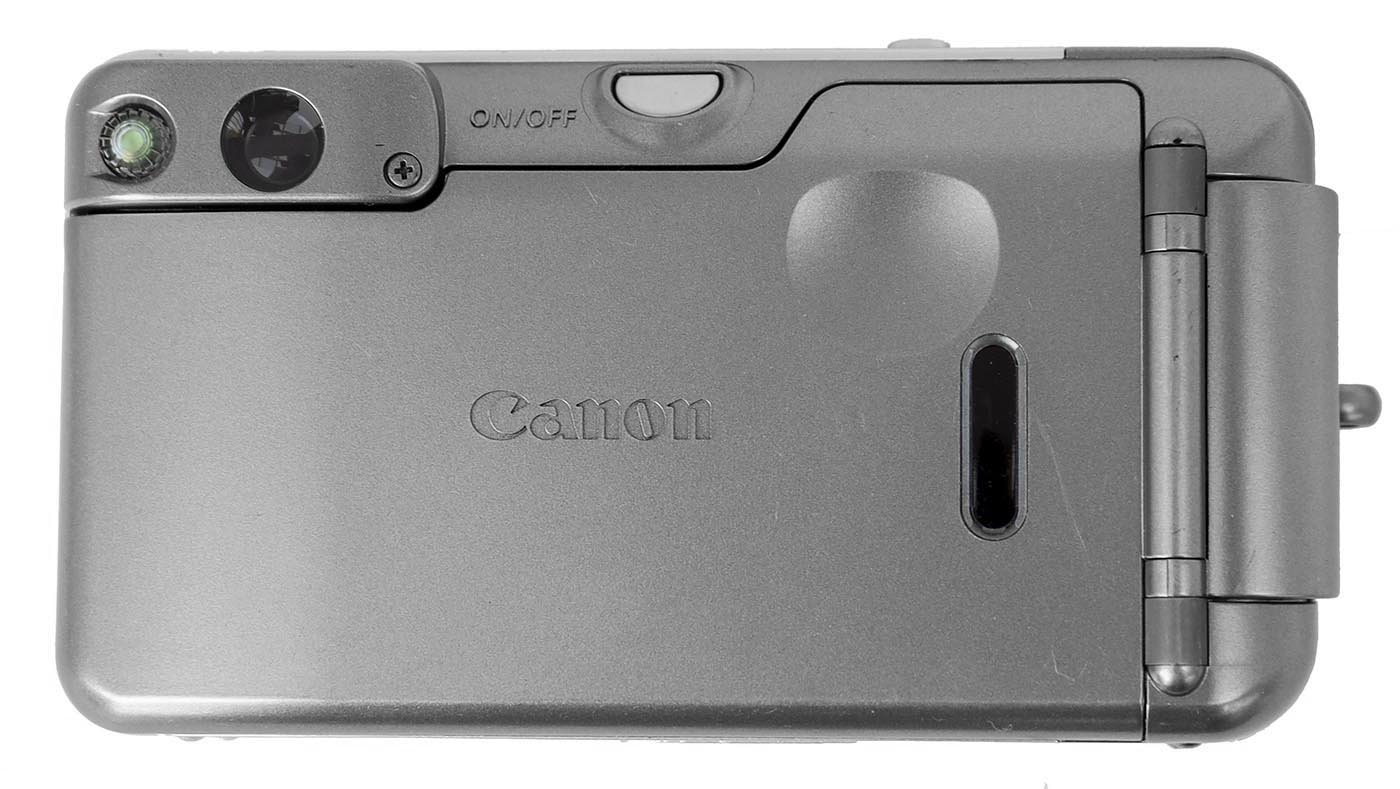 In the upper  left corner is a green light which illuminates when focus and exposure are acceptible.

This “Point and Shoot” was introduced by Canon in March of 2005 near the end of their film based pocket cameras. In Japan it was called the Autoboy N 130 II and in Europe it went by Prima Super 130U Date.

This, again, is a fully automatic 35mm film camera that will actually fit in your breast pocket. To one used to modern digital DSLR’s it will seem a little restrictive. There is no ability to manually control focus, aperture, or ISO setting. You literally load the film, point the camera and shoot.

The lens is a 38 to 130mm zoom controlled by a rocker switch on the top of the camera. Focus is achieved by a 3 point AiAF (Artificial Intelligence Auto Focus). ISO is read from the DX code on the film can. The ISO range is 25 to 3200 and, although I have not found confirmation of this, I suspect that the camera defaults to an ISO of 25 with a film can without DX code.

Shutter speeds range from 1/500th to 2 seconds, depending on the zoom setting.

The shooter can chose one of 6 modes for different shooting scenarios: Auto, Action, Night Portrait, Portrait, Closeup, and Real Time Release. Full specifications for this camera are easy to find on the internet.

I was unable to find a copy of the User Manual for this camera on line. But be patient. I will find one eventually and see that it is posted in the Library. In the meantime, this is a camera that really does not need a manual. It is pretty easy to figure out.

In use the camera is too small for my liking, and I have small hands. It may be because I usually shoot with a full frame DSLR that I prefer something a little more substantial in my hands. 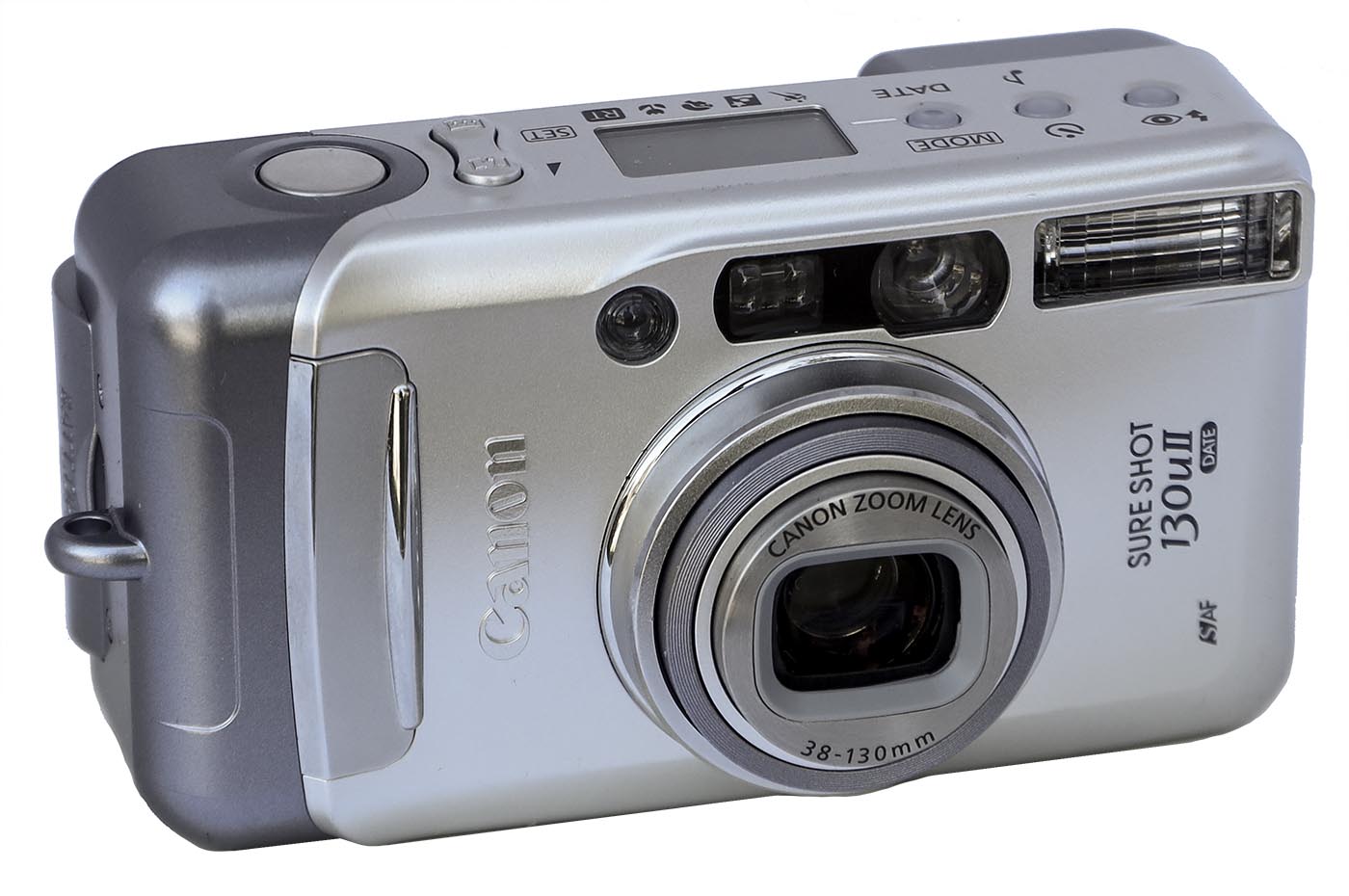 The lens open and set at 38mm does not extend far beyond the body. As focal length increases it extends further. 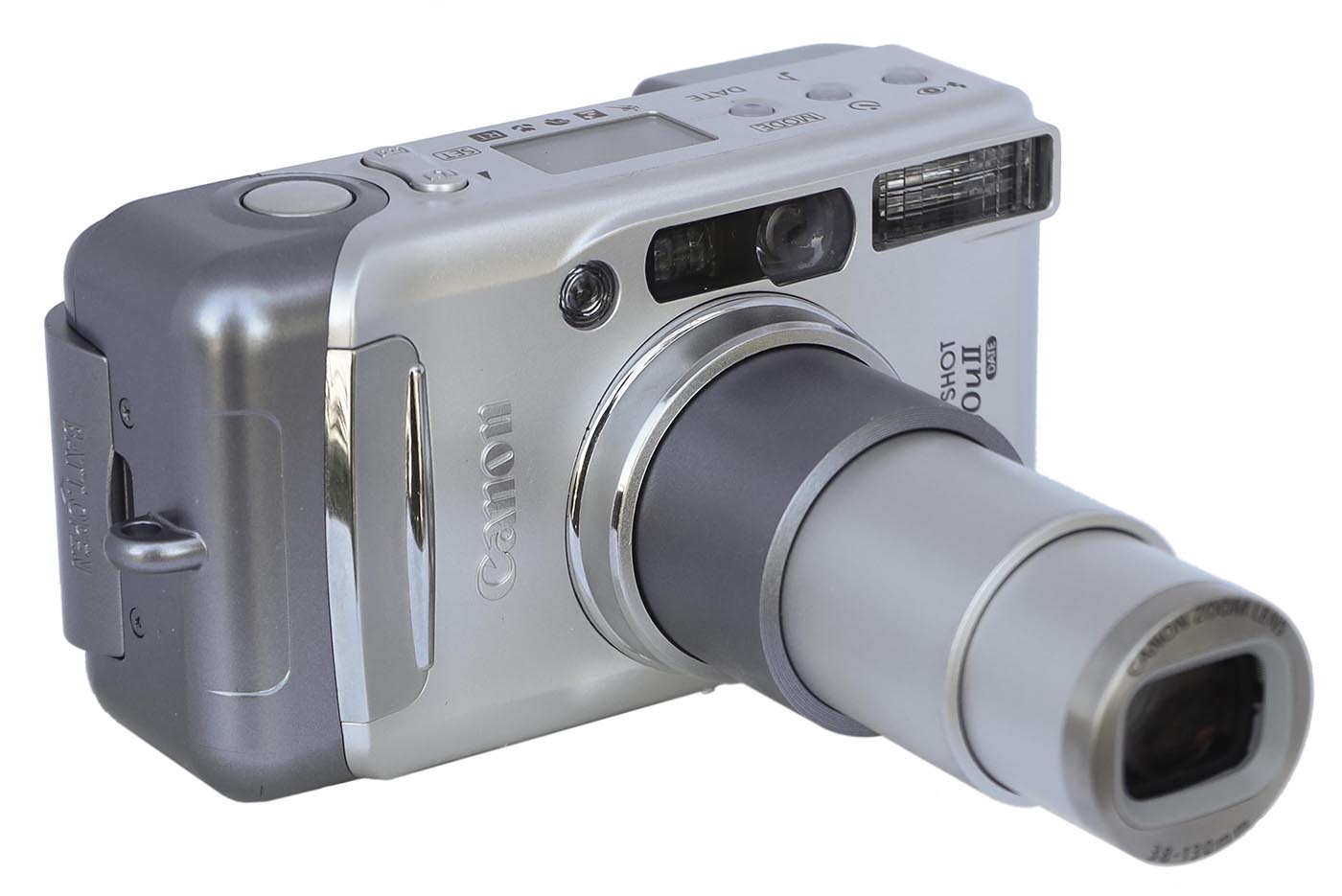 At 130mm the lens is fully extended and appears quite unwieldy, however, it is light and handles well. 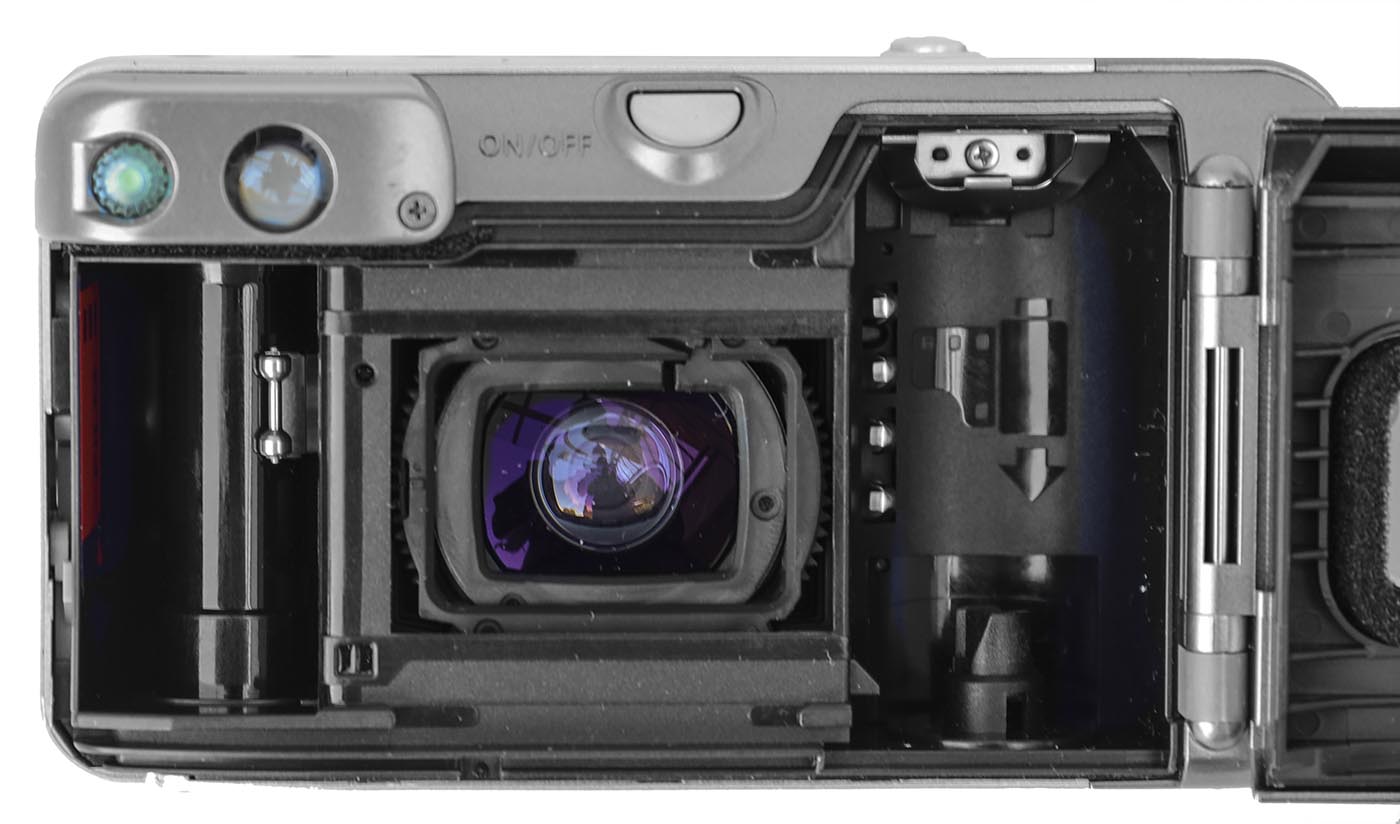 With the back open, film loads on the right side and winds to the left. One simply lays the film leader across the back and down into the chamber on the left and shuts the door. The camera automatically winds the film two frames and sets the counter on the LCD screen to “1”. You are ready to shoot.

My Copy of this Camera

Notes:     Camera is fully functional including the light meter. It read the DX codes on the film can and set the ISO without difficulty. Focus was decent although the lens is not capable of fine detail regardless of focus setting (see examples below).

Picture Taking with the Sure Shot 130U II Date

When I bought this camera it was in such nice shape I was very anxious to actually shoot it. That is something I cannot do with all of the cameras I come across because some don’t work well, or at all, and shooting them is impossible. I loaded this one with a roll of Ilford Delta 100 Professional and went for a walk. All of the pictures below are from that one outing.

This camera can be carried comfortably in the breast pocket, although, it is a bit thick. I found the totally automatic design disconcerting because it gives you no feedback that things are being done correctly.  There is no way to know that until you develop the film. That aside, it feels good to hold. It is very light and you can carry it without knowing it is there.

The zoom is controlled by a toggle switch beside the shutter button in the top of the camera and it is a crude control. No fine adjustments here. The shutter button is set into the camera top and it is hard to sense with the finger alone. I found myself looking to confirm my finger was on the shutter release. But all of this aside, I did get used to it and finished the short roll of film. 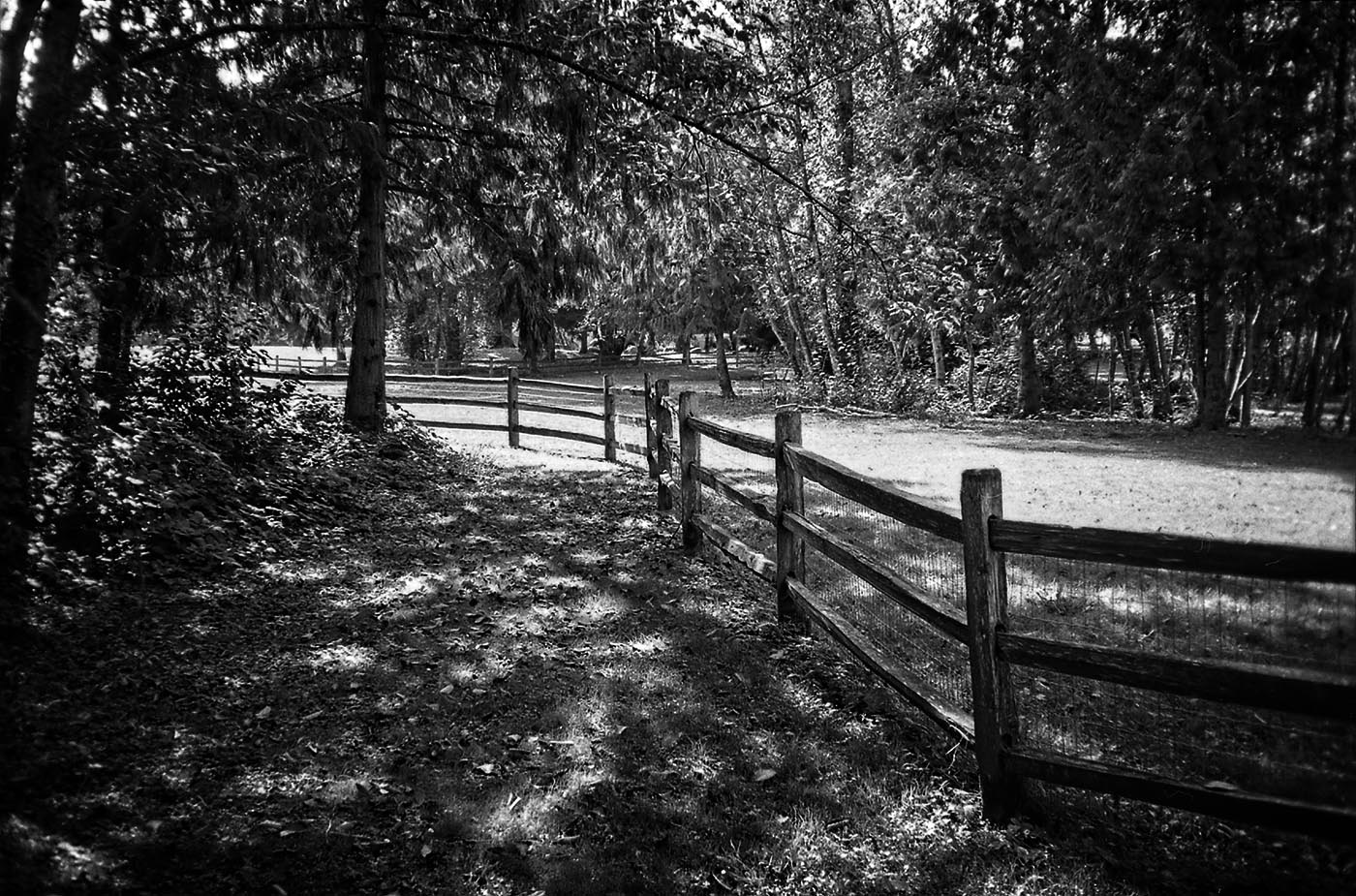 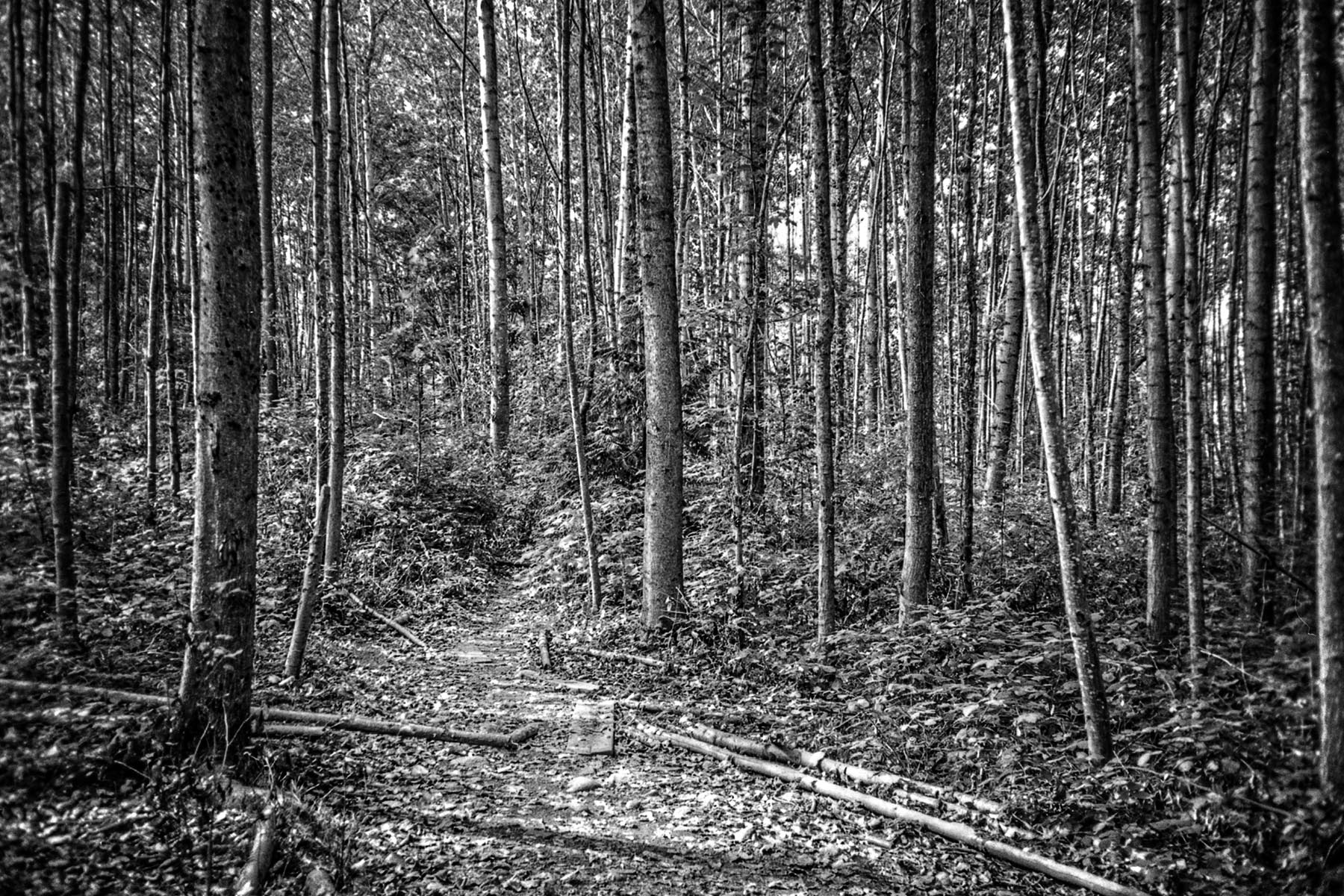 These two images taken in the park near our house demonstrate that the 130U II is a capable camera able to take fine pictures. I have processed these with my usual suite of image programs to overcome whatever deficiencies exist in the film and camera. I often complain that modern cameras can be too sharp to create the mood I want and for those pictures this camera would serve admirably.

I found that the camera’s metering is averaged over a wide field. I missed the spot metering I habitually use. A few high constrast images of a white object on a black background were over exposed as the camera averaged the scene giving too much weight to the dark background.

The shutter is almost silent. The film transport is noisy but it is also very quick.

Once the film was processed I used my flatbed scanner set to 2400 dpi which Is the maximum usable sharpness setting. This is usually adequate for posting to the internet as it appears to be here.

In judging this camera we must remember that it was never intended that it produce razor sharp images. The target market for it wanted 4×5 or 5×7 prints or color slides. These are not demanding requirements and to design the camera to do anything more would have been a waste of effort. For its intended user, this camera functioned perfectly! 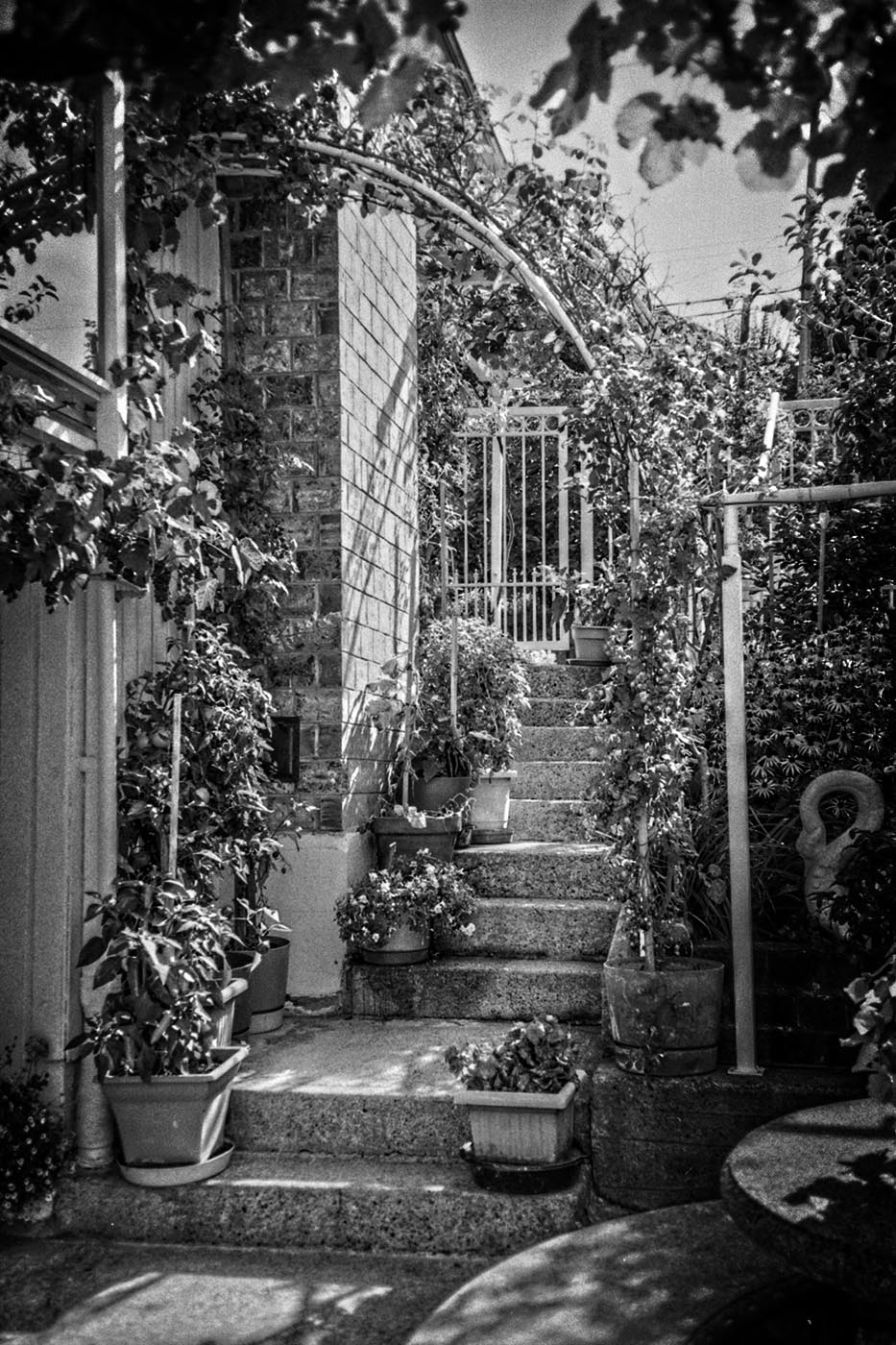 This is the full frame image from the camera showing stairs on the side of the house. There is no doubt this is a capable camera. 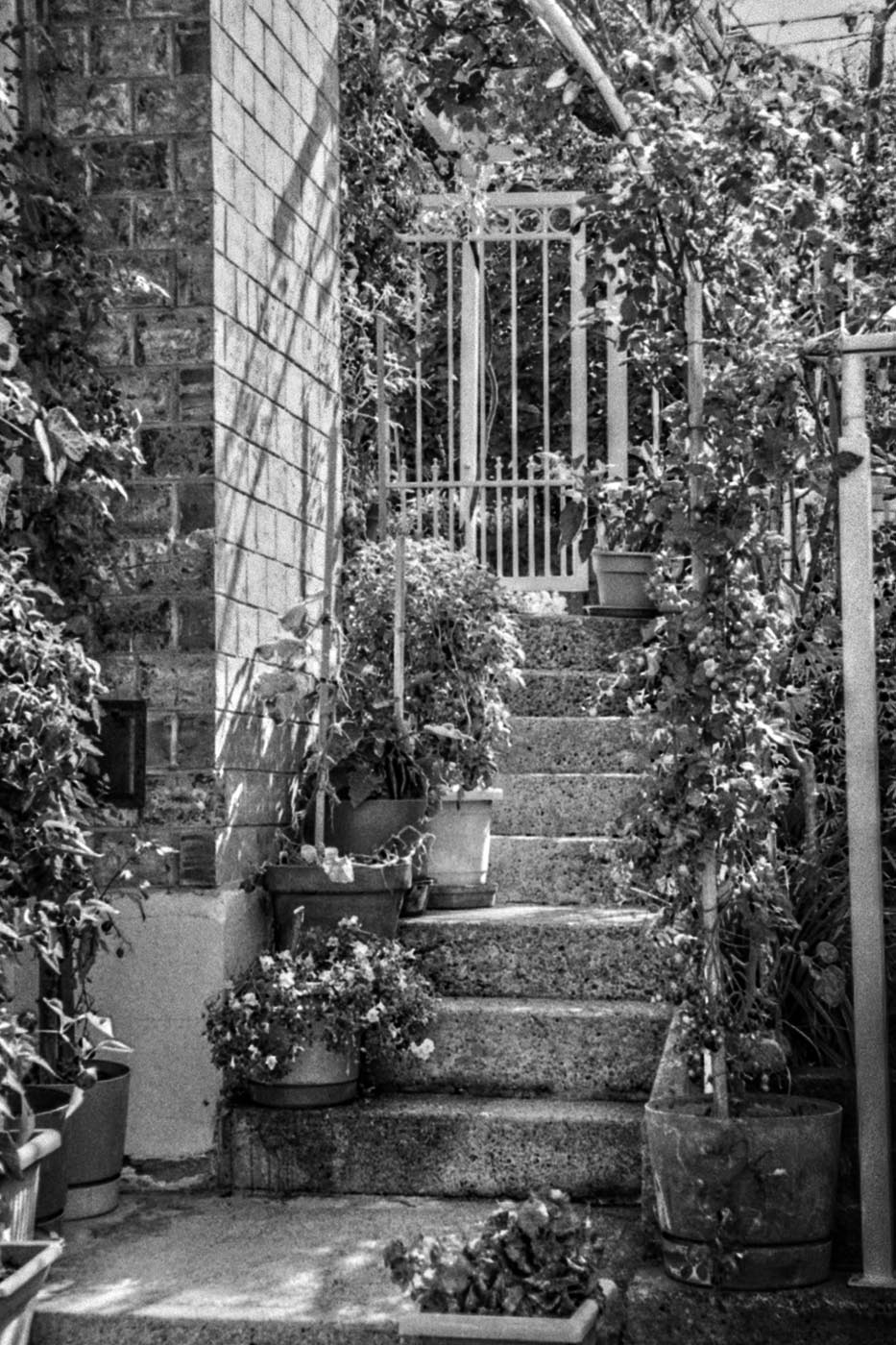 Zooming into the image on the left you can see that the sharpness holds up well. At this magnification you would have a very nice 8×10 inch print.