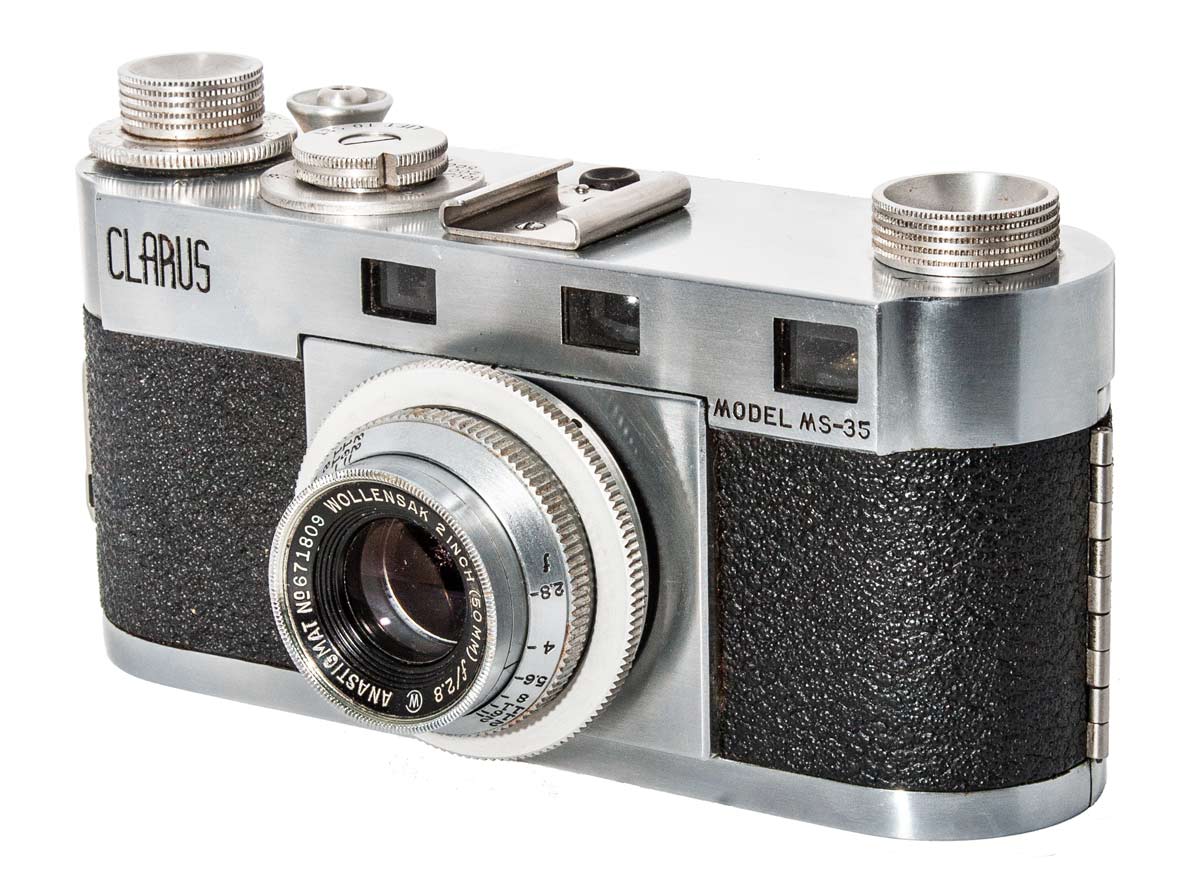 An American made 35mm camera from the late 1940’s that was almost a Leica copy but not quite. It never found acceptance in the American, or any other, market in spite of a vigorous sales and promotional campaign.

As with most of my miscellaneous cameras, I cannot say why I bought this camera. I had read about the Clarus Model MS-35 but I had never seen one in stores or at camera shows. I came across this copy on E-bay and really did not intend to buy it. But no one was placing serious bids and so I put in what I thought was a very low bid not expecting to actually acquire the camera. But I won with the high bid at what I thought to be a very fair price.

After I paid for the camera with Paypal I got a nice note from the vendors, Angela and Barry (E-bay sellers “barryandangy”), thanking me and saying they would ship the camera immediately. It was a really pleasant experience with some very nice people. And a week later my camera arrived. 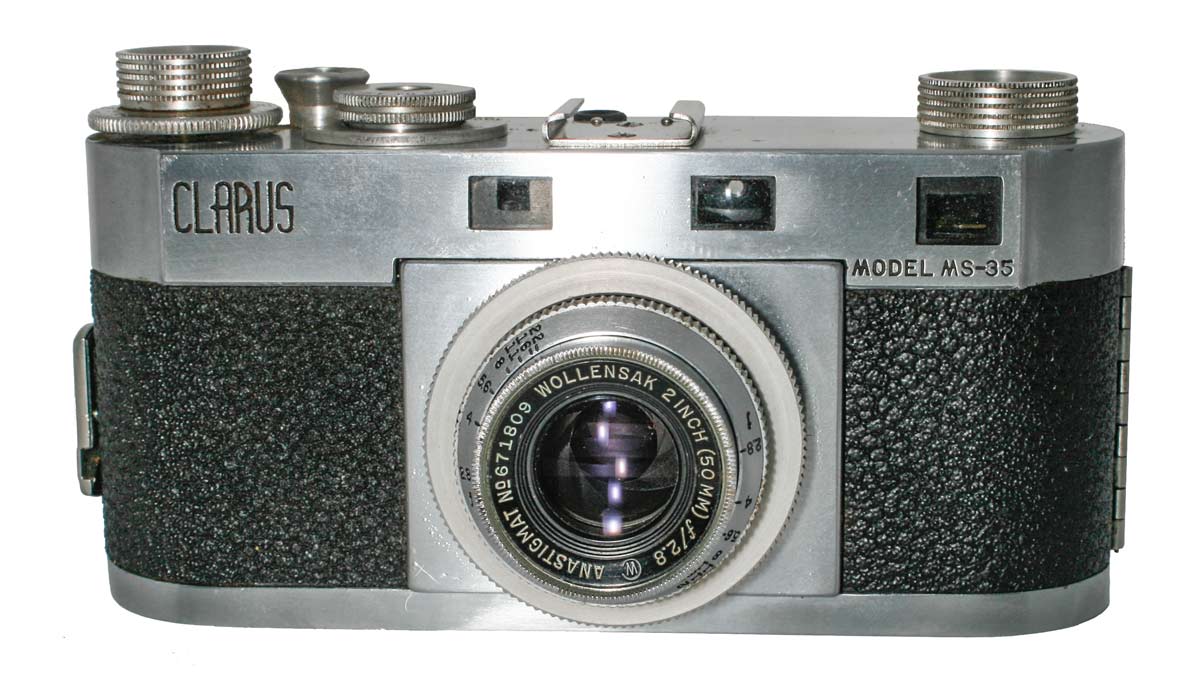 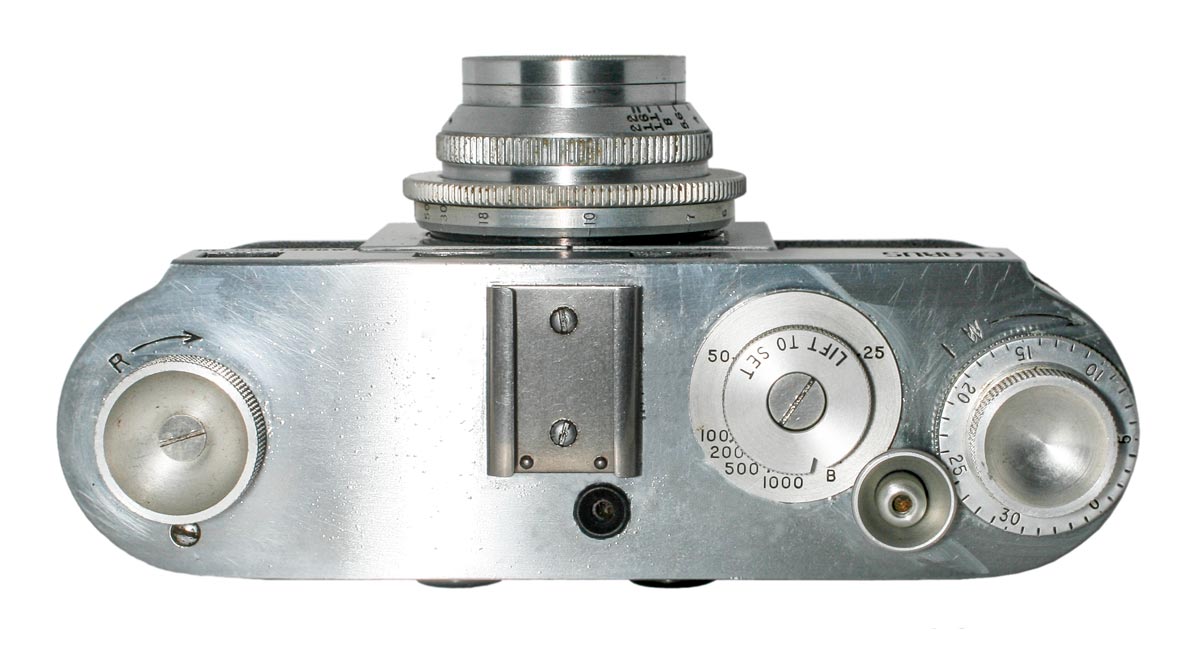 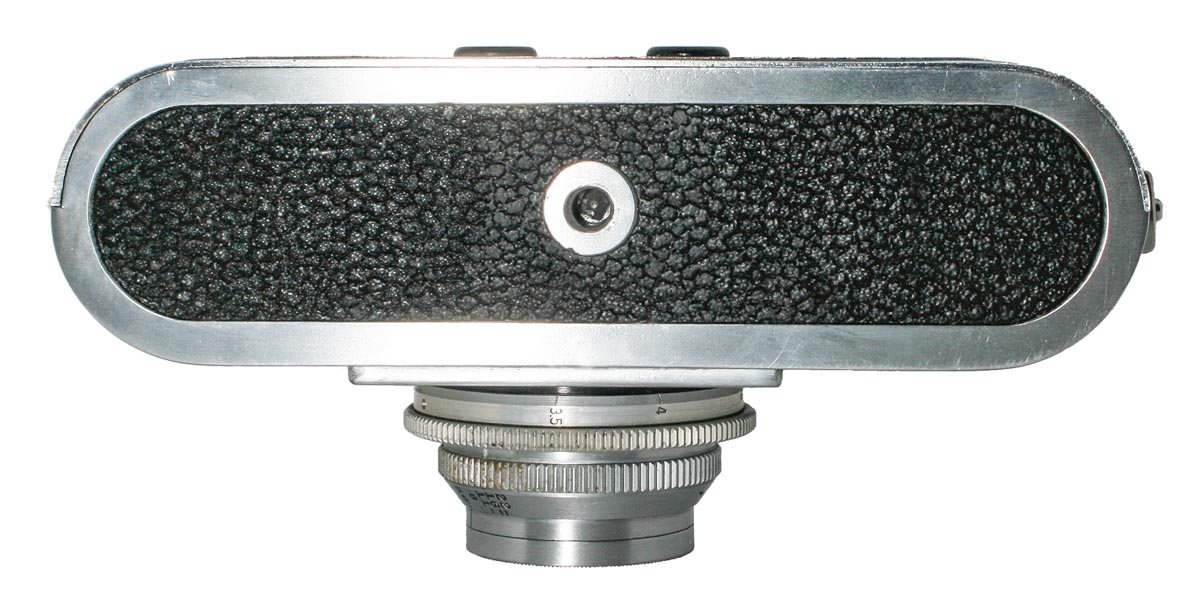 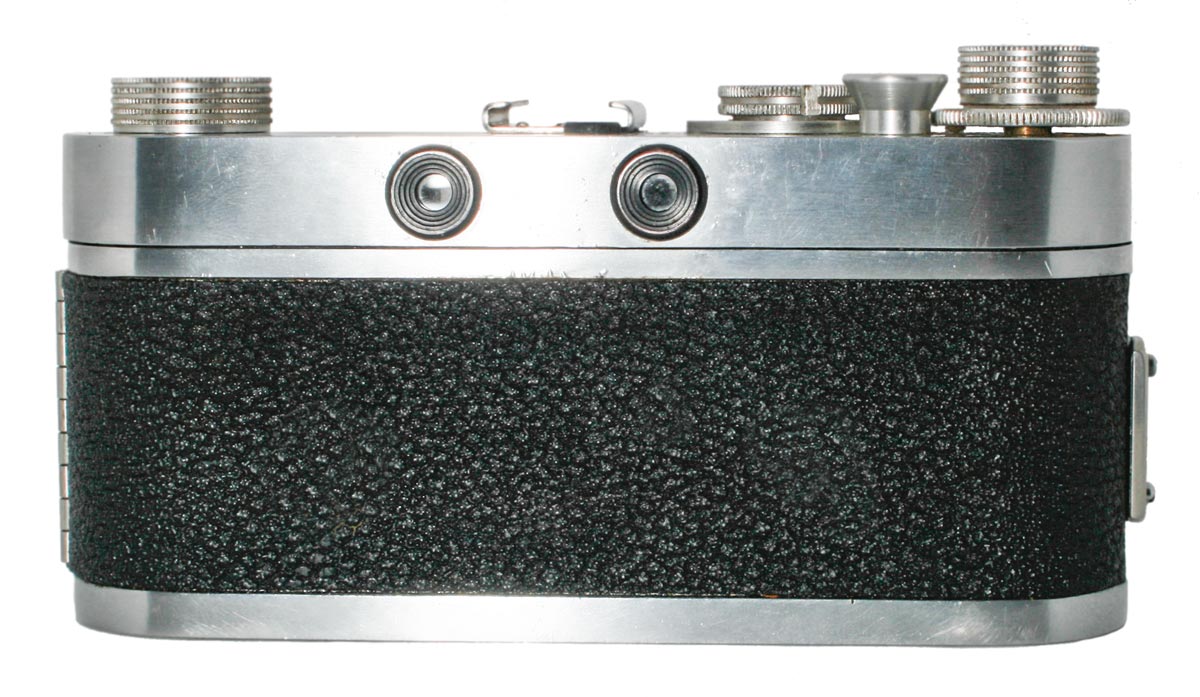 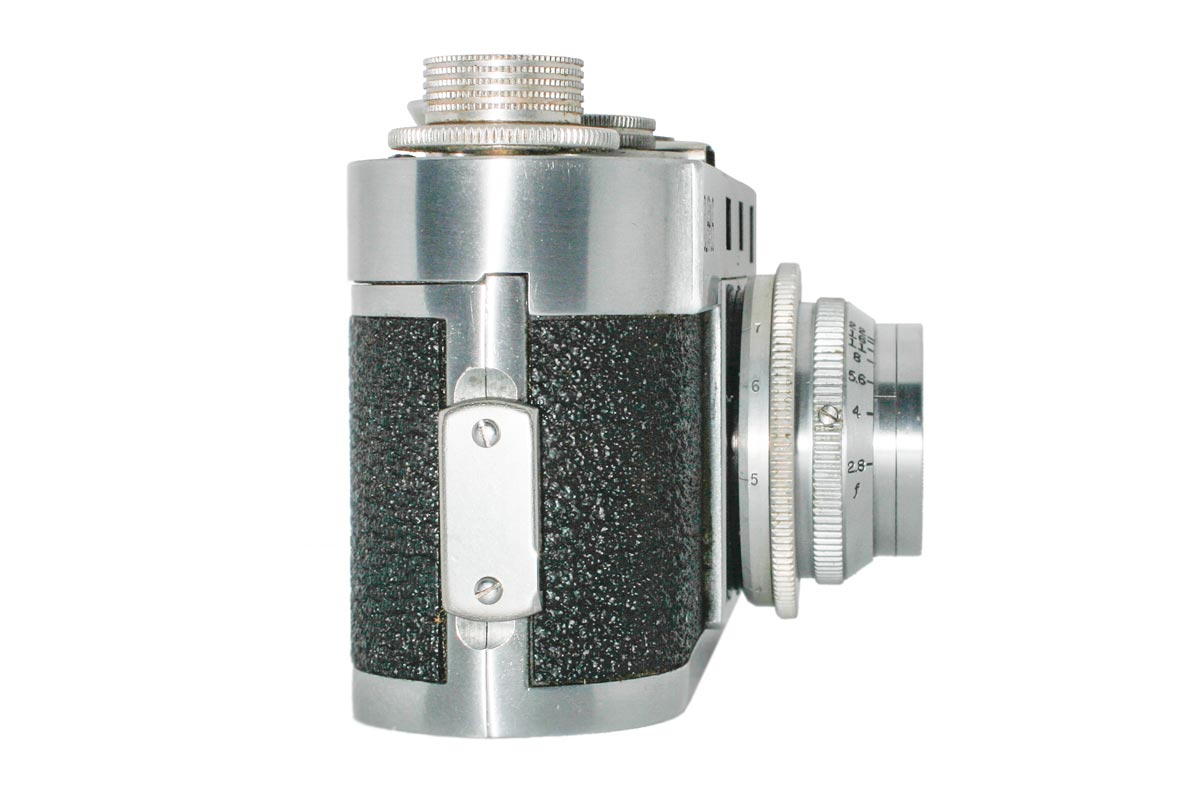 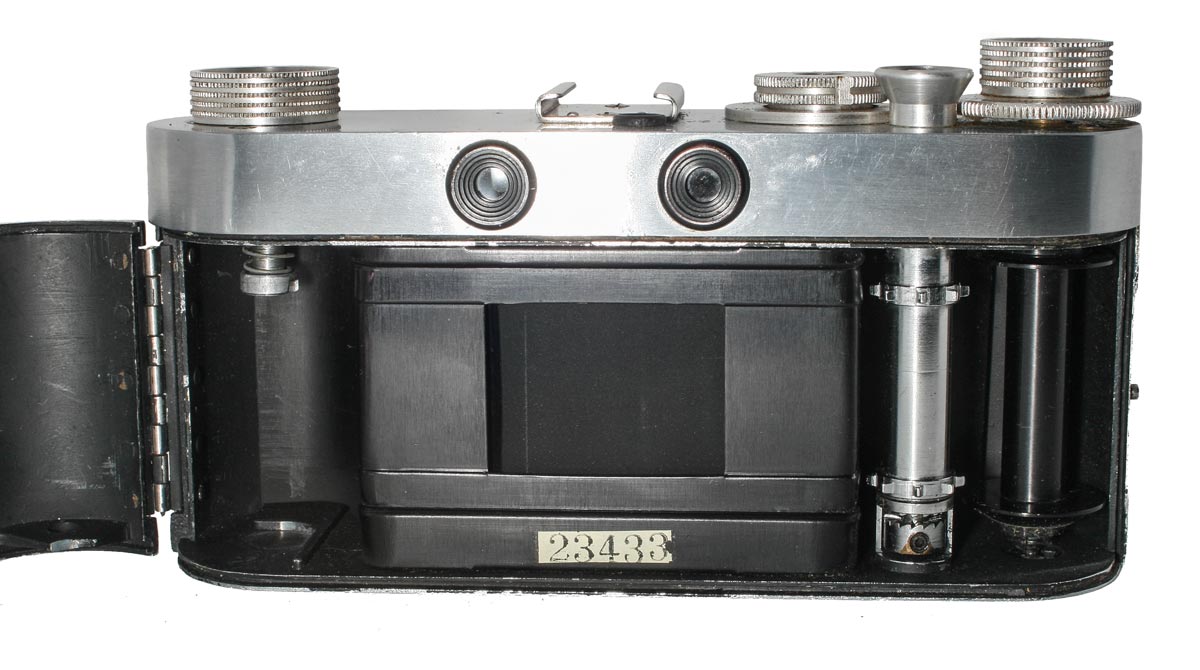 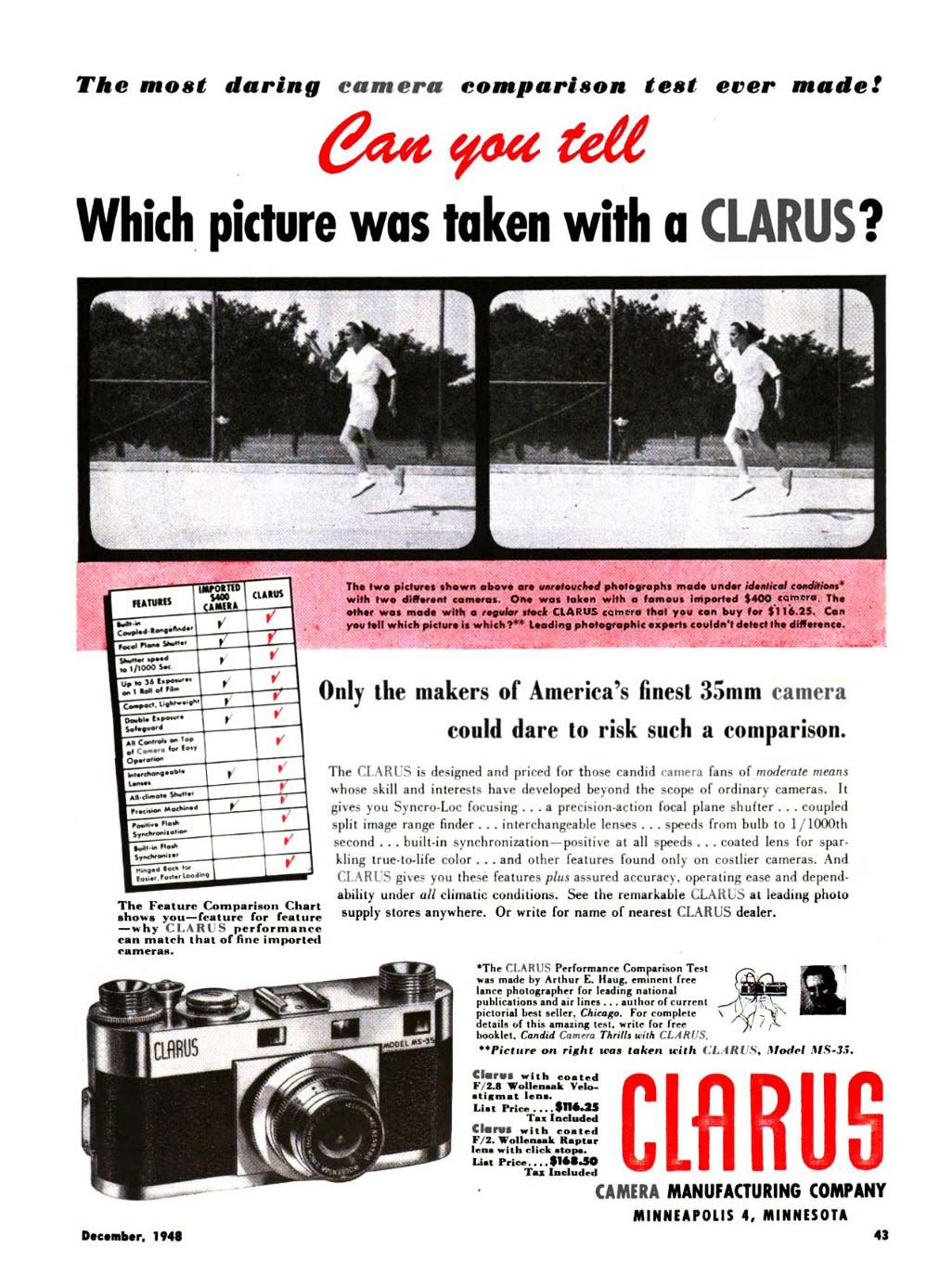 So, what is this camera’s story? The Clarus Camera Manufacturing Company of Minneapolis, Minnesota, was crated specifically to make cameras. Their first, and only, model was the Clarus Model MS-35 which was manufactured from 1946 to 1952. This was a 35mm range finder coupled camera with shutter speeds from 1/25th through 1/1000th and B.

I say it was almost a Leica copy in that it failed two important tests. When the camera was designed the lens mount was a screw mount based on a proprietary thread size that fit no other cameras and the “flange distance” was greater than 28.8mm. To me it is a mystery why the planners of this camera would not copy the Leica mount so that new owners would have a large choice of existing lenses. It may have had something to do with Leica patents which did not expire till after the war. If the camera was designed before or during the war the patents could explain this. Unfortunately, by choosing to create a unique mount with an approximately 41mm thread they restricted owners to a choice of a half dozen or so lenses.

Although Claraus came out with only one model, the MS-35, several changes were made to the camera during production so there are several variations. Mine is a later model from around 1950. However, I am not going to get into all that detail. There is a great deal of information on the Internet about these cameras. Check out Mike Eckman’s site for lots more information. He is obviously into these cameras.

The early MS-35’s gained a reputation for unreliability and there was apparently a very high return for maintenance rate. They simply did not function well. This is generally attributed to early manufacturing problems and unskilled workers. By the time these problems were ironed out the damage to the name had been done and the company could not overcome the injury to the brand.

At the end the company passed to new owners and some of these cameras were rebranded as “Wescon” cameras but it was too late and the camera passed into history.

My copy is in excellent cosmetic condition. The steel exterior seems to have been nickel plated and that finish has become very slightly pitted. The camera seems to function but the shutter sounds slow and erratic. It needs to be cleaned and adjusted.

In the hand the MS-35 does not feel like other cameras. It is heavy, apparently built on a machined cast steel frame. It is too thick front to back and it has sharp edges that are uncomfortable to hold. It feels like a product of a machine shop and has a totally different feel than the Canon rangefinders, the Leotax or Niccas or the real Leicas. They feel like fine instruments. This camera feels like a tank.

But all of that aside, I like it. It may not technically be a “Leica Copy” but I am putting it on the shelf with my other rangefinder cameras. It looks good there and it represents an interesting piece of photographic history.

So, my camera can be summed up like so:

Notes:                   The camera appears to work fine but the shutter sounds slow and erratic. It needs to be taken apart, cleaned and re-oiled before it could be used reliably.

The case is in good shape except for a repair done to the bottom attach point for the top of the case. Also, the dome fastner snaps on the back flap are missing. The case is a required item because this camera lacks lugs for a carry strap. Early models had the lugs but the later ones did not. 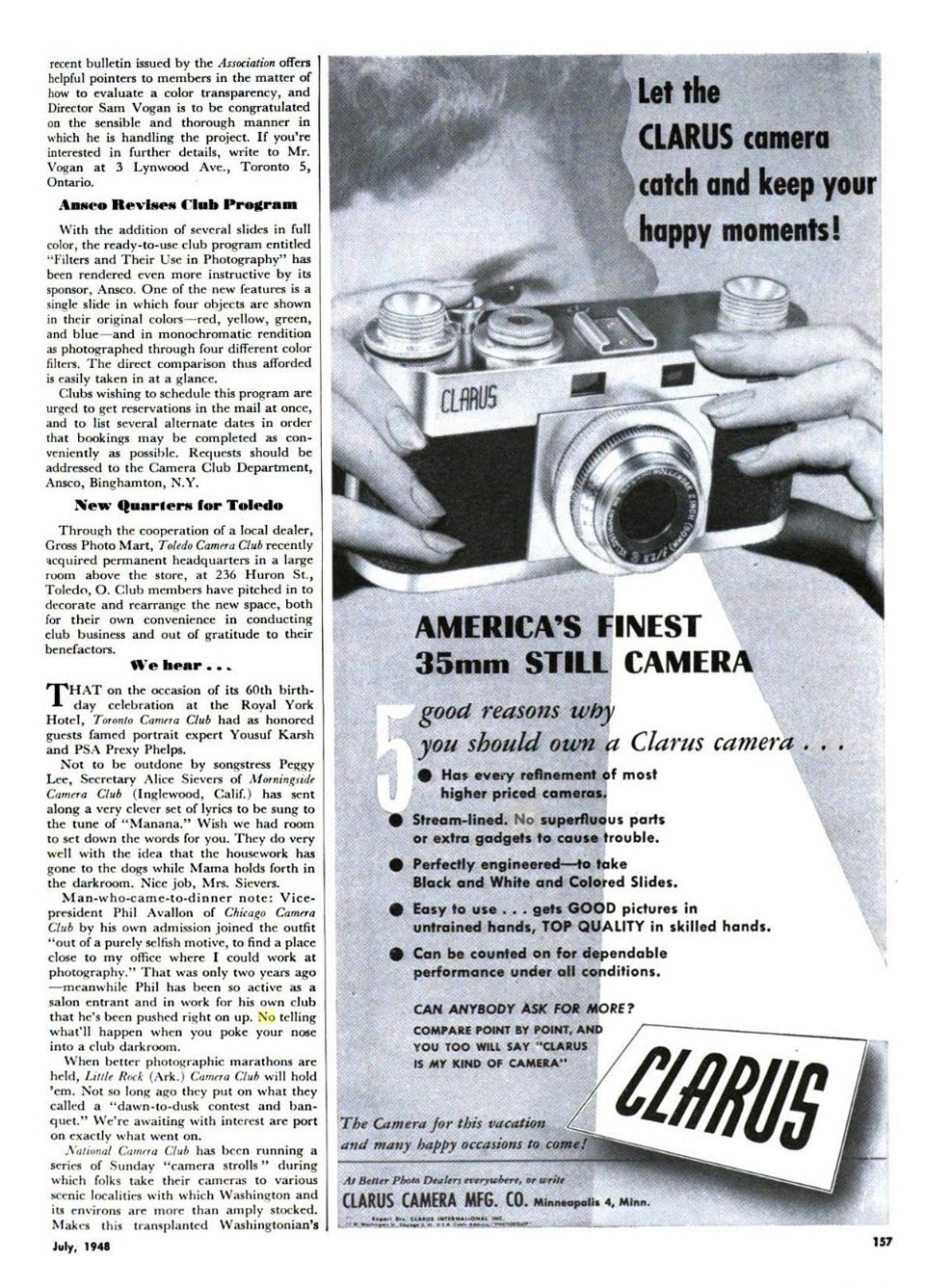 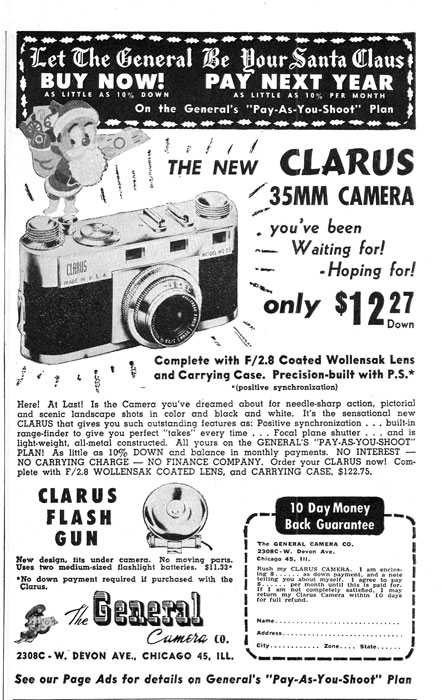 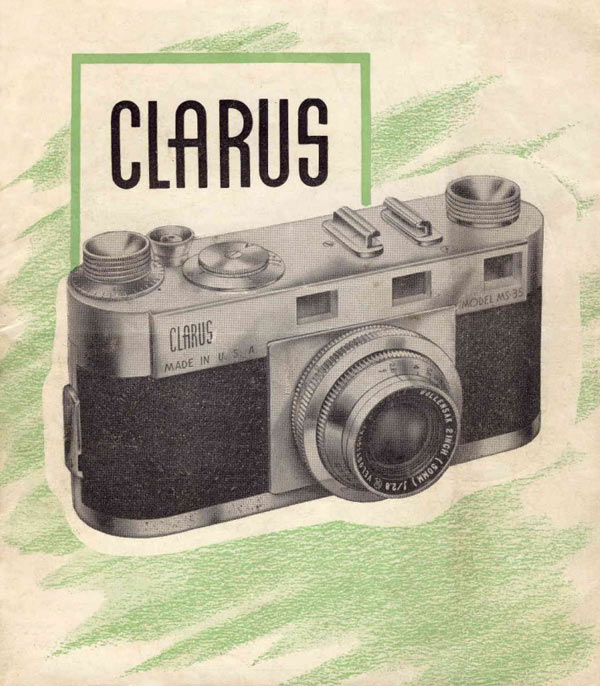