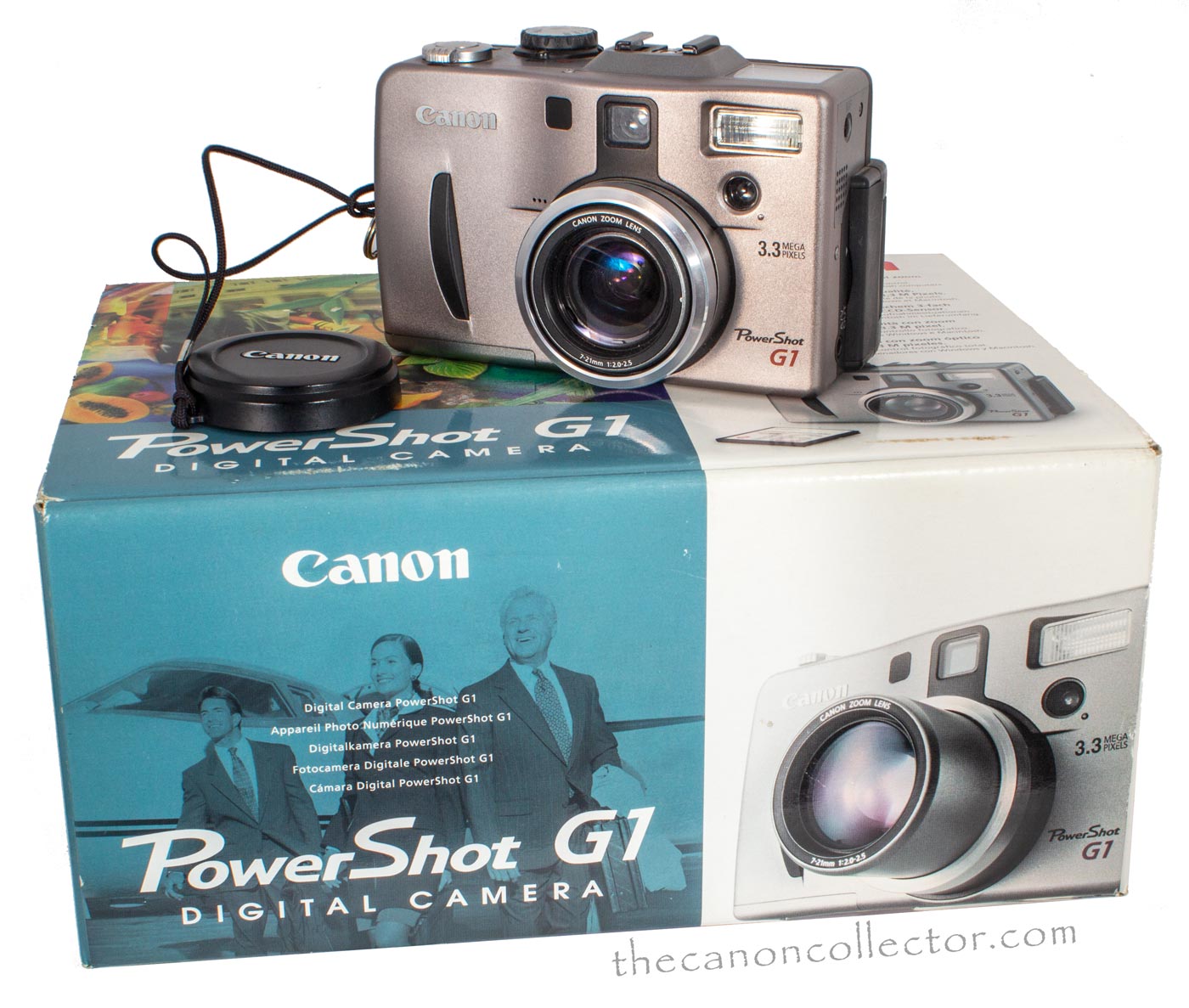 The PowerShot G1 was a 3.1 mpx digital “point and shoot” camera aimed at the “enthusiast” shooter. 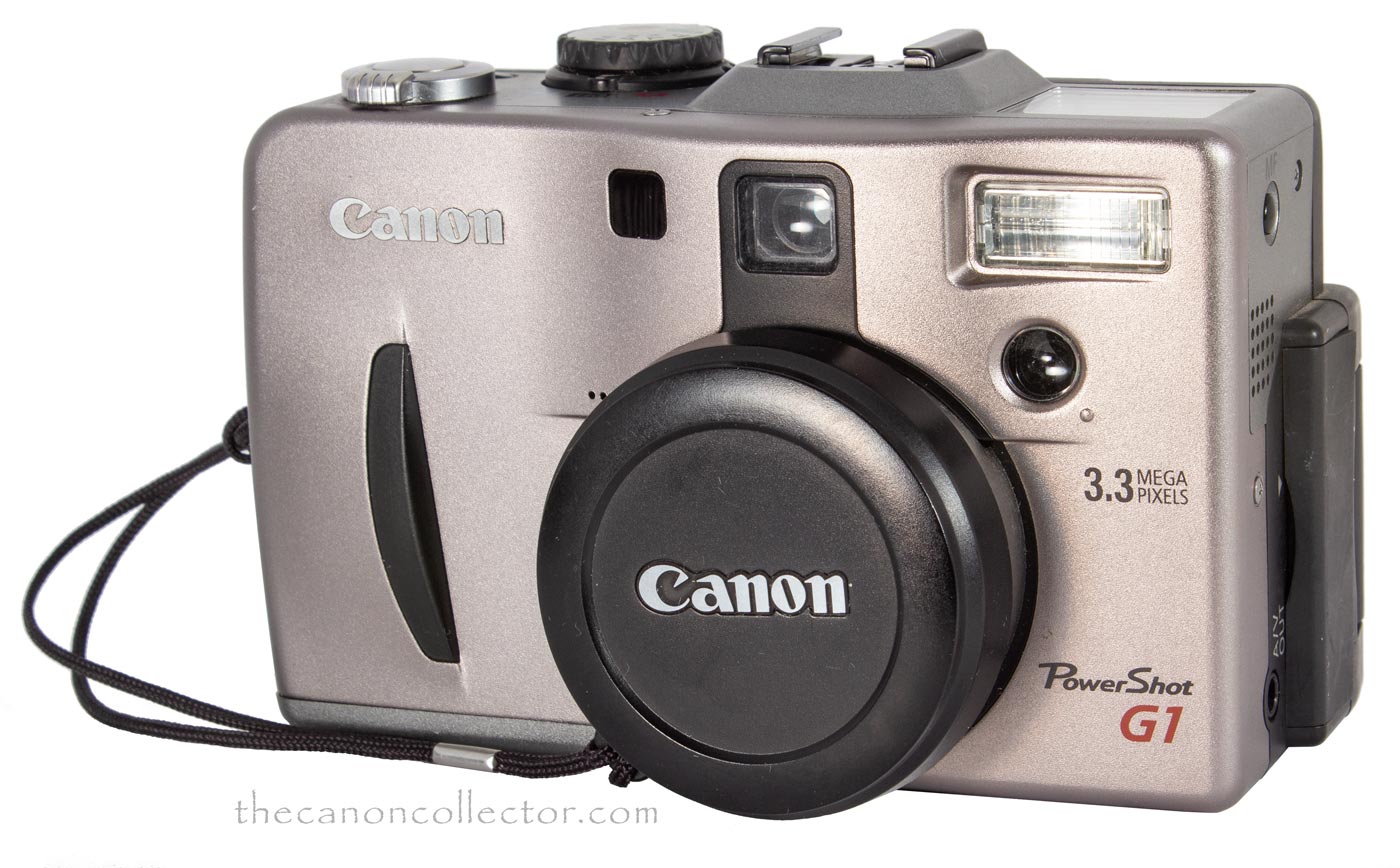 The G1 does not have a built in lens cover. It uses a traditional lens cap on a string to protect the lens. 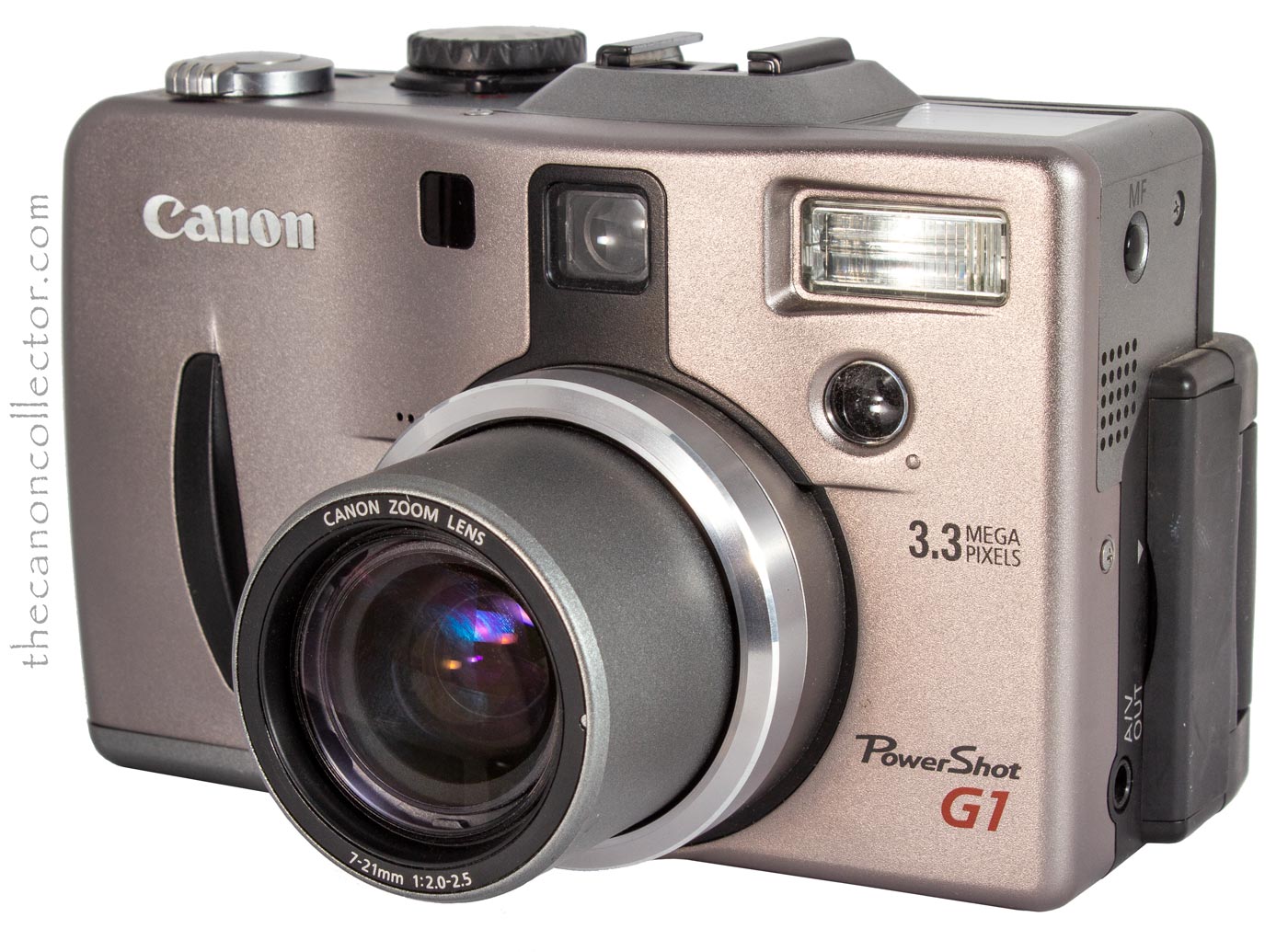 The G1 does not have a built in lens cover. It uses a traditional lens cap on a string to protect the lens.

The First of a Series

Canon introduced the G1 in October of 2000 aimed at the “enthusiast” user. At the time the current film cameras were the Elan 7E and SureShot Z90W and the current digital cameras were the EOS D30 with 3.1 mpx and the PowerShot A50 and S20 at 1.3 mpx and 3.1 mpx respectively. So when the PowerShot G1 was introduced with features found in higher end digital cameras and with a megapixel count as high as the D30 it was impressive.

The G1 is a 3.1 mpx camera with a 34 to 102mm (35mm equivalent) f/2.0 – 2.5 zoom lens. It has shutter speeds from 8 seconds to 1/1000th of a second, Iso range of 50 to 400, TTL auto focus and light metering in either center weighted average of spot metering modes. It can record images in JPEG or RAW formats and AVI video. For the year 2000 these specifications are indeed impressive.

In the top deck is a dial for setting the capture mode. The ones we are interested are  interested in are Auto, Program (P), Tv, Av and Manual. These are familiar because they are on pretty well all Canon digital SLR’s. As a m atter of fact they are on my Canon R as well. So this is a familiar camera to modern users. The dial also has several modes denoted by symbols for less sophisticated users but if you are reading this I suspect those modes are of no interest to you.

The camera writes to CF type I and II cards which were the fastest available at the time. Because of the pixel count, best images are 2048 x 1536 pixels, images are around one megabyte in size so really large cards are not necessary.

The G1 introduced a new battery, the BP-511, which was a Li-ion Battery providing

7.4 volts at 1100 mAh. This is a rechargeable battery that provides an impressive battery life of 200 to 300 images per charge.

This was not Canon’s first Point and Shoot aimed at the Enthusiast. That honour goes to the 1998 Pro70 which had a 1.68 mpx sensor and stored its images in a proprietary Canon RAW format. This was one of the first digital cameras to offer a RAW format to the user.

There is a full review of the G1 on the DPReview website and they do it so much better than I might. Very complete!

The most frequently used controls for the G1 are on the top deck. The LCD on the left reads out the basic status of the camera 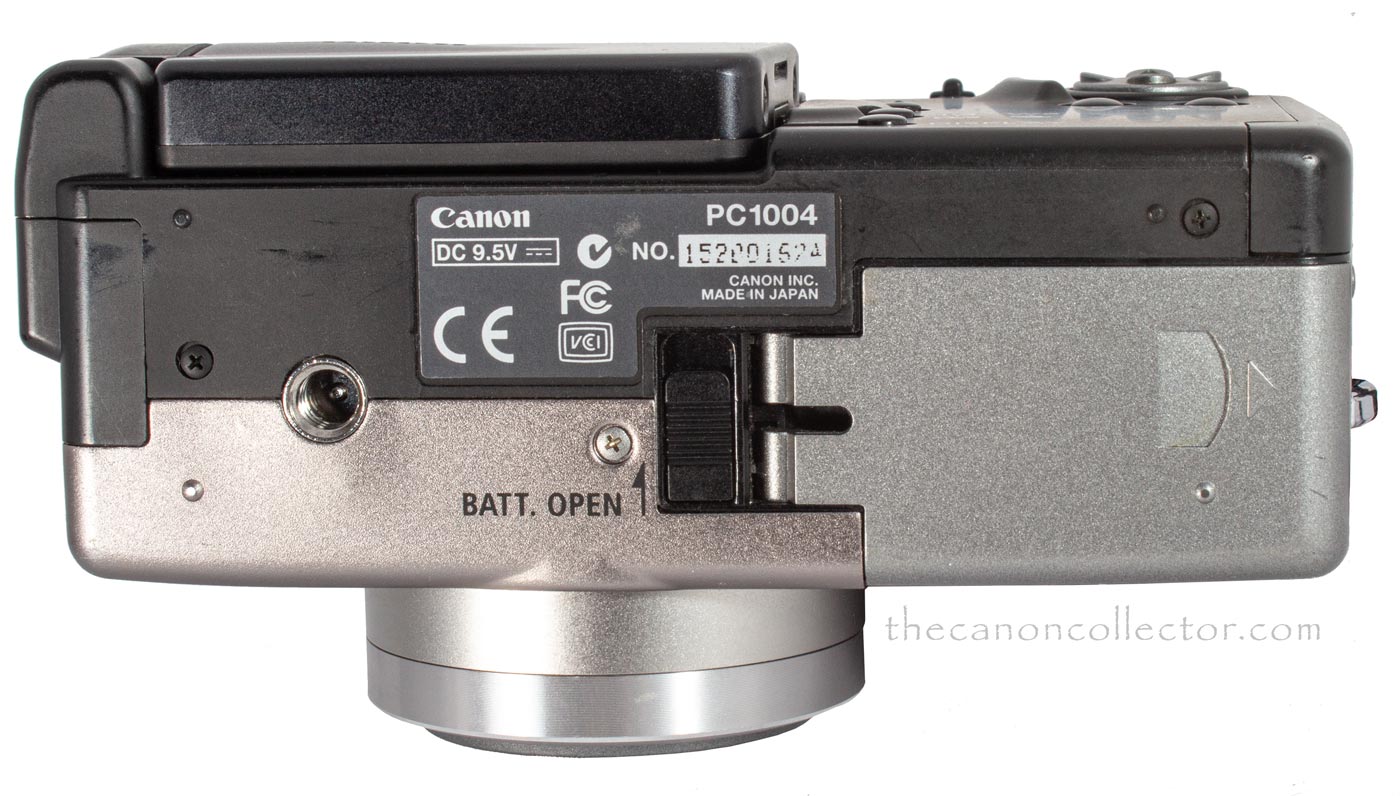 The bottom has the door to the battery compartment and the tripod attach point.

On the back of the G1 is an articuated flip-out LCD panel for reviewing images or shooting using live view. The functions of the various buttons and dials are explained in the User Manual available on the right. 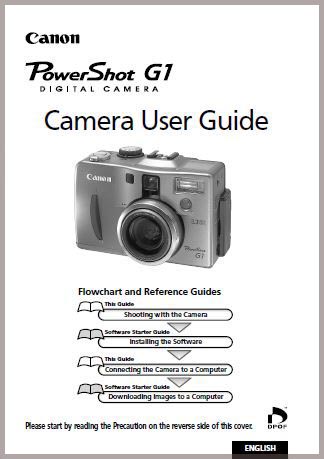 If you require detailed operatng instructions you will find them here in the User Guide.

Shooting with the PowerShot G1

This camera is a brick. It is heavy and feels well made and solid. But it does feel thick and chunky. The controls are positive and the trugger is light and positive. After shooting with it for a few minutes I felt right at home. Most of its features are to be found on any modern DSLR and even on my Canon mirroless.

The shutter is silent and I don’t like that but shutter noise can be controlled in the Menu. I like it nice and loud so I know if I have my picture.

My first picture was of chairs in the back yard while I was raking leaves. It was a dull day and it had been raining on and off. That said, the pictures turned out rather nice with accurate color. 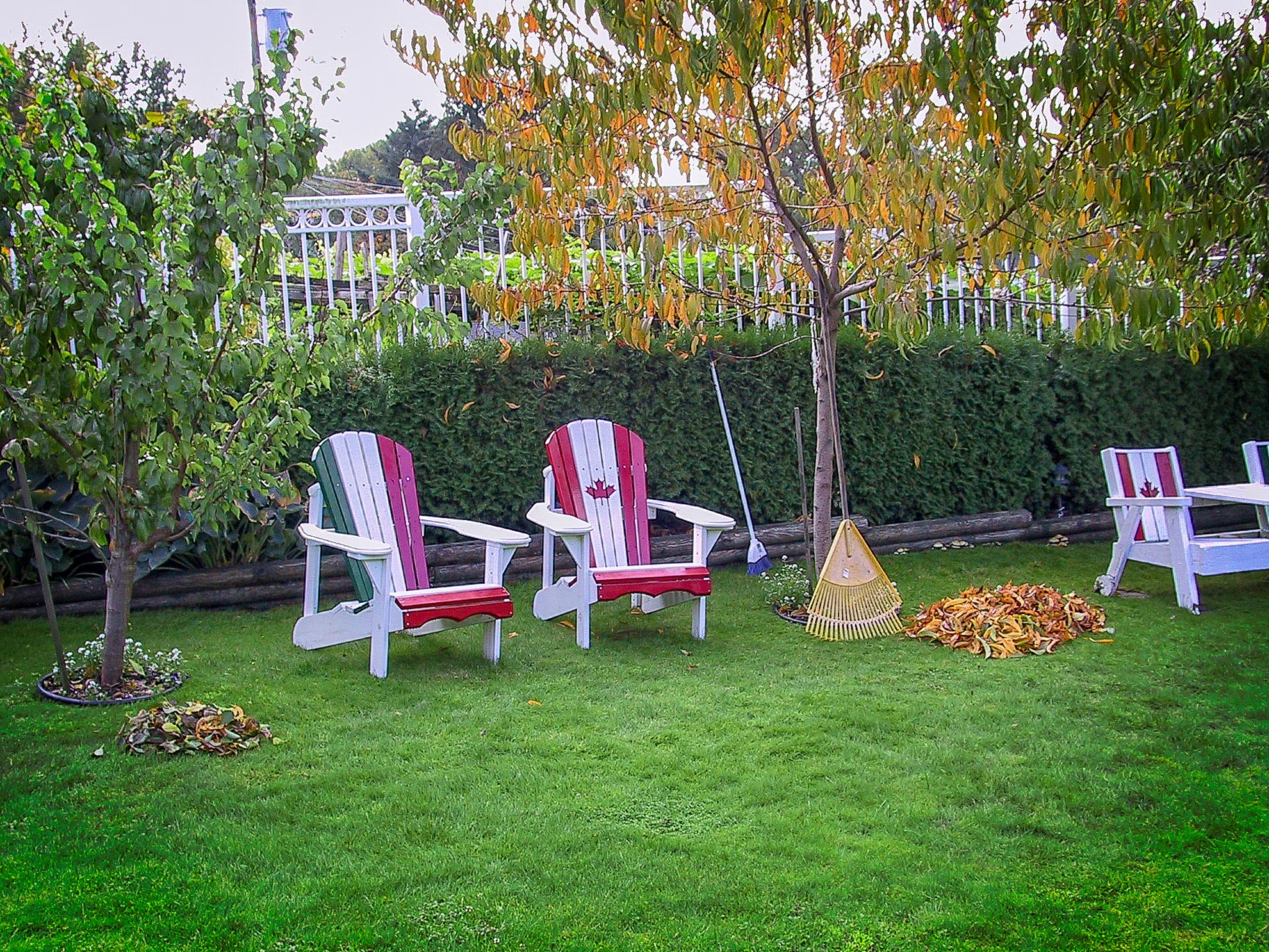 Full frame image with some post processing. Colors are accurate for a dull rainy day. 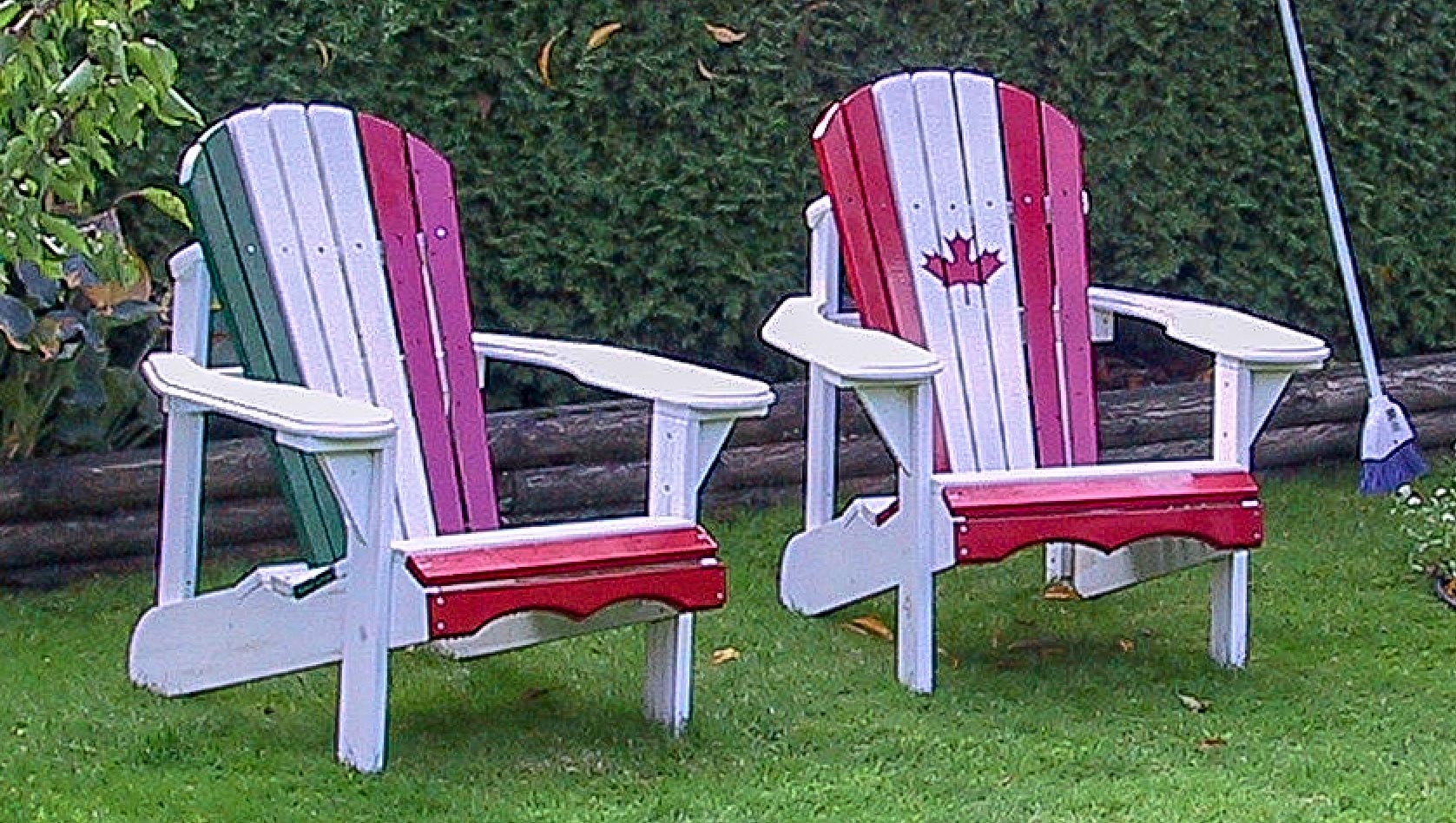 The center of the image enlarged on Photoshop to 200%. The quality is better than I was expecting considering the 3.1 mpx size. 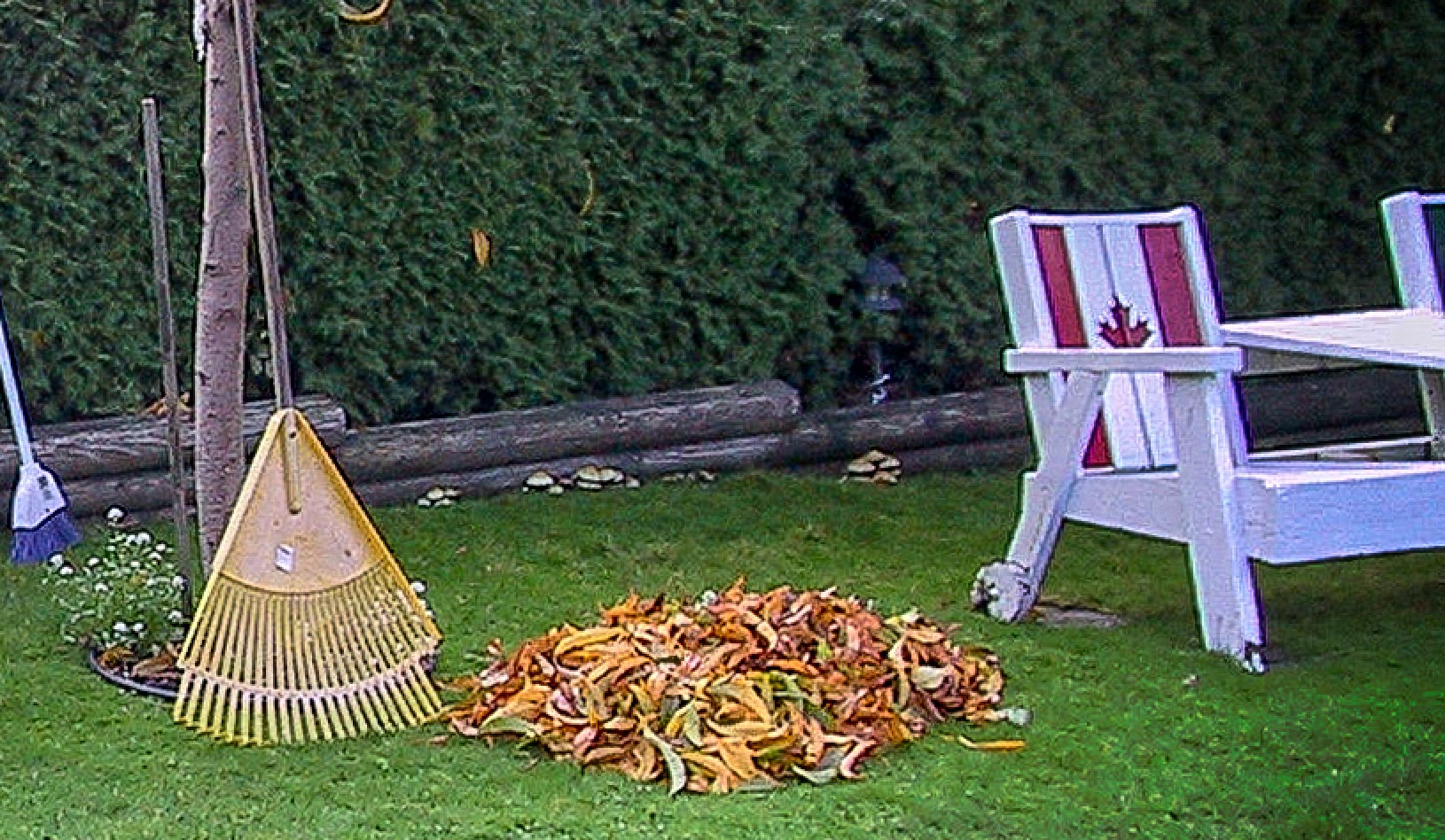 The right edge of the image at 200%. This camera is amazingly good and certainly adequate of Online images. 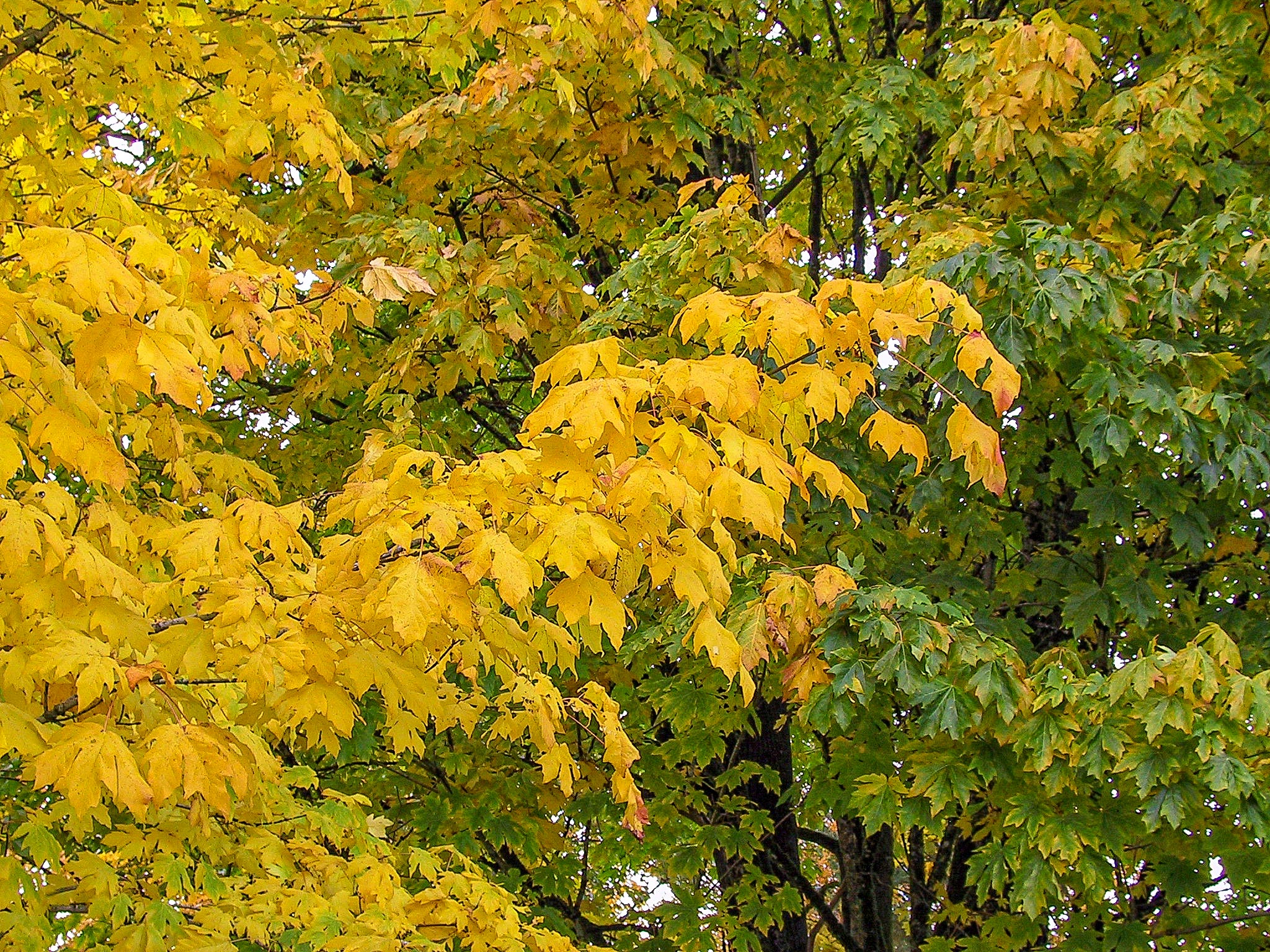 The same Fall day. It was overcast and raining occasionally. This is a full frame image taken with the camera set to “Auto” so I simply pointed it and pressed the shutter. The color is good, the image seems sharp corner to corner. 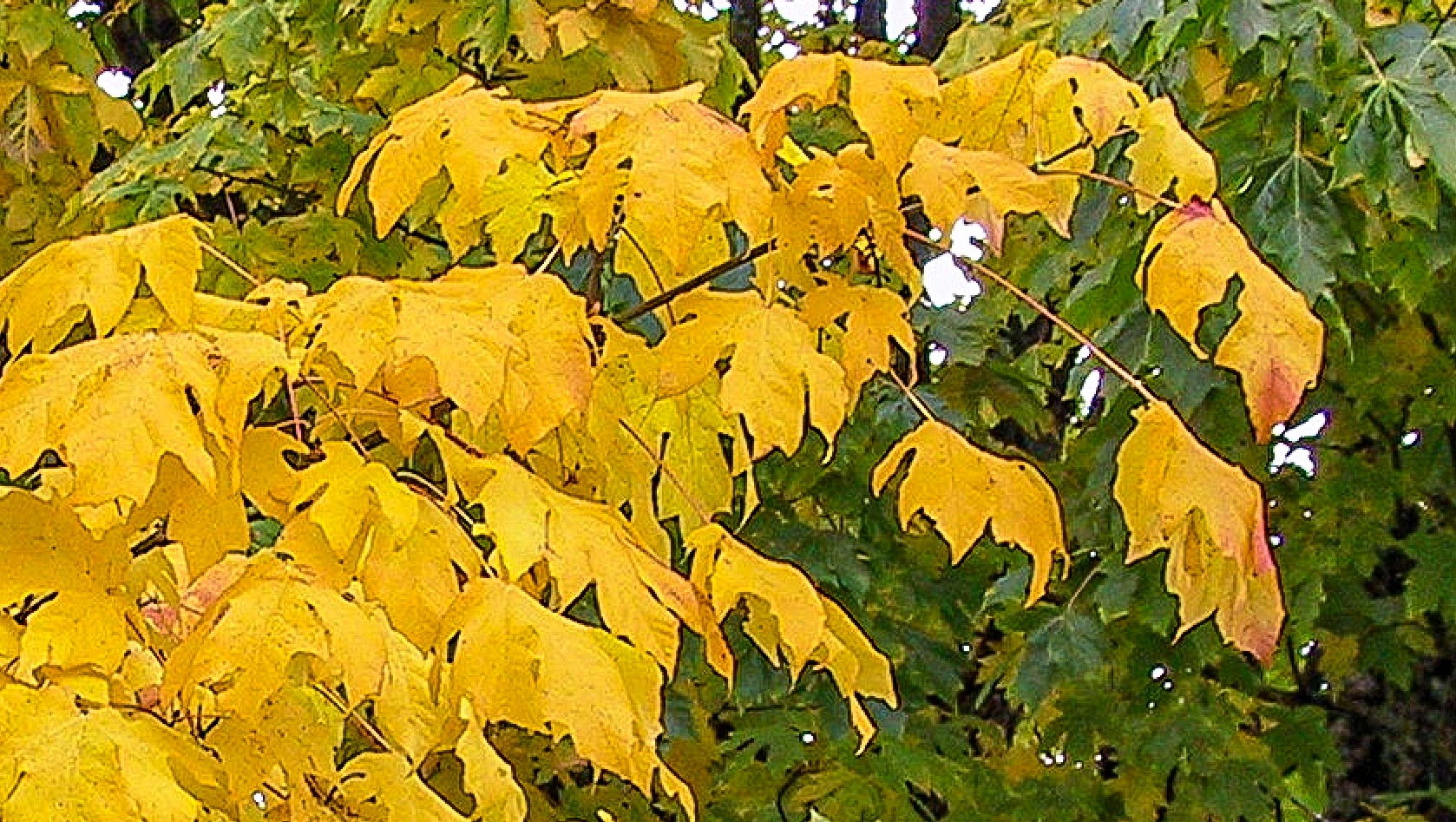 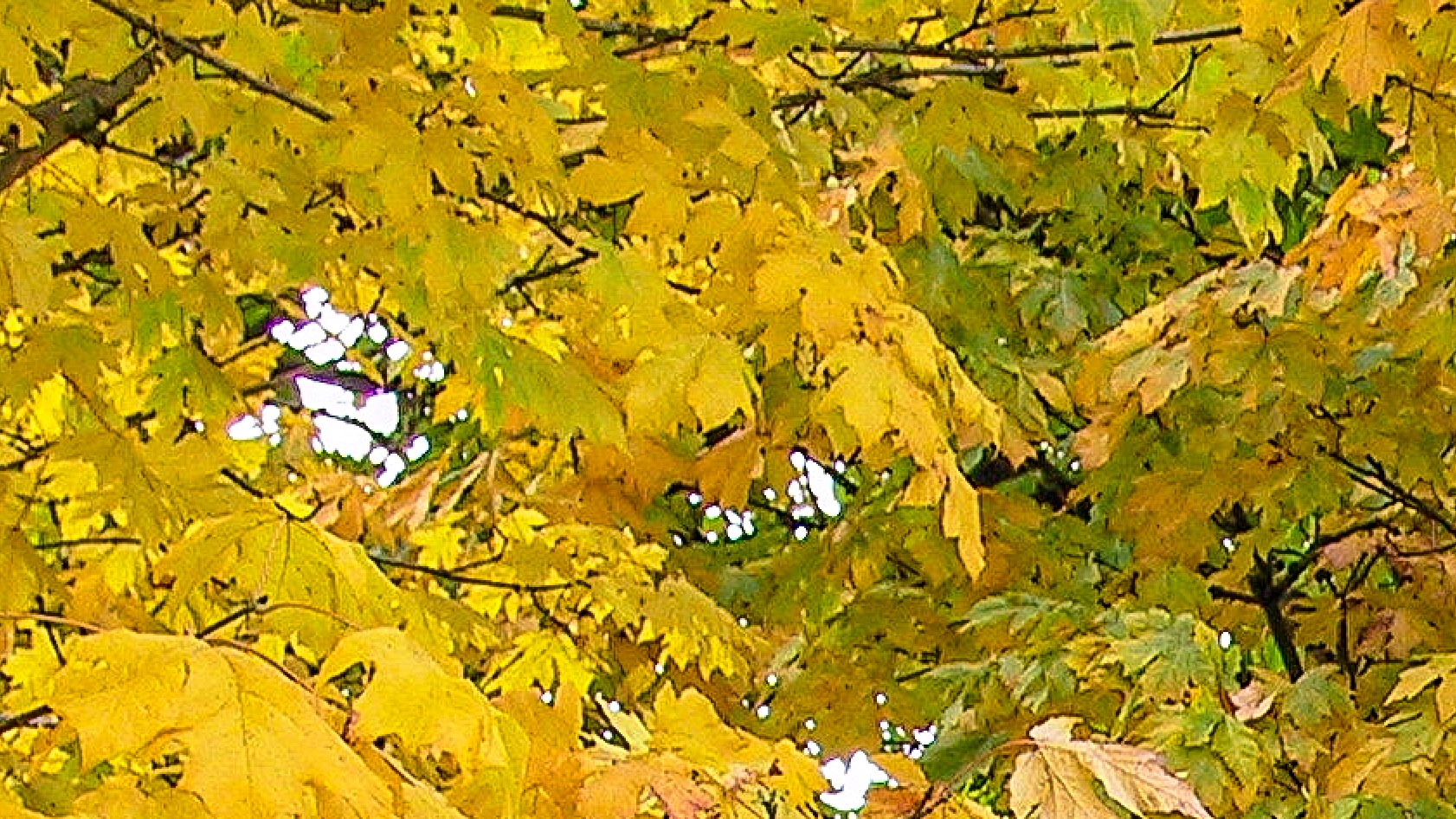 The top left corner of the image at 200%. Impressive!

I like it. The shutter is smooth and the controls feel really solid. But it does feel bulky in the hand and it would not fit in one’s pocket comfortably. For twenty years ago, when digital cameras were only a few years old and film cameras were still being developed and sold, this was a good camera. And remeber, this was before smart phones became cameras. For the average and slightly advanced shooter, this was a great camera.

After I took these images the sky brightened for a few minutes I took the image below from my front deck. This is stitched together from five vertical images to give me the panorama. You can see that with a little imagination this camera would be capable of taking some serious pictures. So there you have it: the PowerShot G1 from the year 2000.