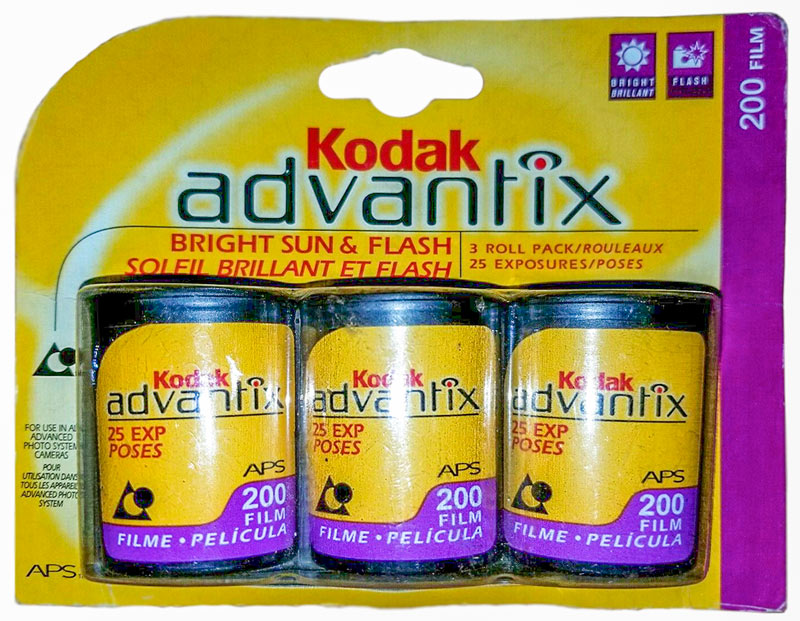 A three pack of Kodak Advantix film. Each cartridge came in a plastic can ready to be dropped into the camera. 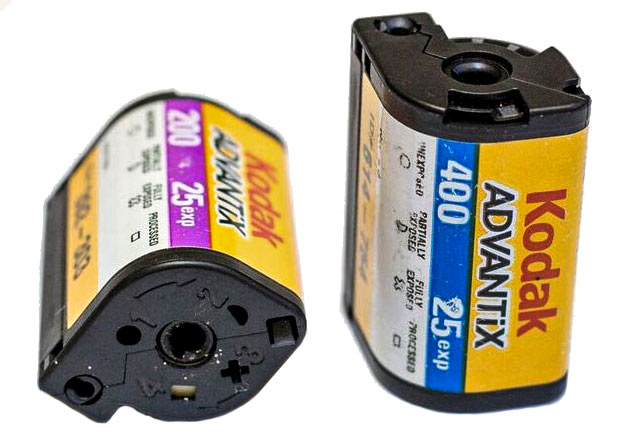 The Elph series of cameras began as film cameras but survived into the digital era. However, before we talk about the cameras we have to talk about developments in film.

By the 1990’s 35mm film had been the standard small camera film and it had not changed since its introduction in the 1920’s. Cameras had come a long way, auto exposure, auto focusing, auto loading, they had changed, dramatically! But film had not kept up.

Digital cameras had just arrived on the scene but they were still an unknown quantity. And the film companies, Kodak in particular, had huge investment in the film industry.

In an attempt to forestal the inevitable, Kodak designed a new film system that was smaller, easier, and more automatic than anything seen to that point. Only it was two decades late.

The new film package was called the Advanced Photography System and was introduced by Eastman Kodak in 1996 under the name “Advantix”. Other film manufacturers followed suit, Fuji Film calling their “Nexia”, Agfa coming out with “Futura” and Konica with “Centuria”.

The format was selectable depending on the camera features. Film came in 15, 25 or 40 exposure lengths. The format used was indicated by exposed square markings on the edge of the film. The film also had a magnetic coating which enabled coding to be totally electronic. The camera used an encoding scheme called Information Exchange, or IX, and so the film format was sometimes called IX240. With the magnetic encoding not only could the format used be encoded but also such things as date and time. This was dependent on camera features.

The film cartridge had a six digit code printed on it and this same code was recorded optically and magnetically on the film along with film speed and length information. Once exposed the film was rewound back into the cartridge. At the processing plant the processed film was loaded back into the original cartidge where it would be stored thus protecting the images. 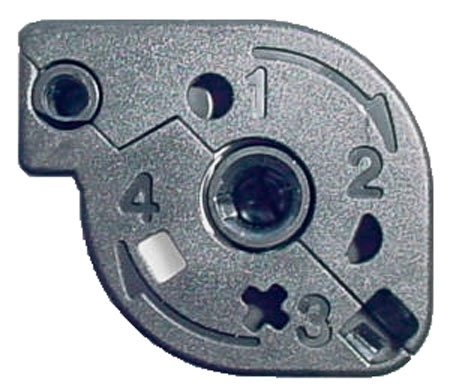 This roll of film is showing the white square, #4, meaning the film has been processed.

Another feature of the system was that, if the camera allowed for it, the film could be removed half way through a roll and later reloaded into the camera to carry on from the last exposure.

To keep track of the state of the film the end of the cartridge had symbols that would show white for different states. A white circle, #1, meant that the film was unexposed. A white half circle, #2, meant partially exposed film. The white X, #3, meant the film was exposed but not developed. And finally, a white square, #4, meant the film was processed. All of these indicators were set automatically and the user never had to remember to set them.

So what happened to APS? Well, ultimately, it was just too late to the party. Firstly, it was never adopted by professional photographers. The wanted greater and greater resolution and with the smaller image areas this was a step backwards for them. This format was incorporated into many point and shoot cameras very successfully.

There were even some mainstream SLR cameras that adopted APS. Canon’s own EOS IX and IX Lite were examples. These cameras adopted the APS cartridge and could mount any of Canon’s EF lenses. But it was too late. Digital cameras overtook APS and made it irrelevant.

APS required costly processing equipment that could read the format codes, optical or magnetic, and produced different sized prints. It also had to keep track of the film’s cartridge so that the proessed film could be placed back into the original cartridge. It was difficult to justify the investment in the equipment with the approaching digital revolution. 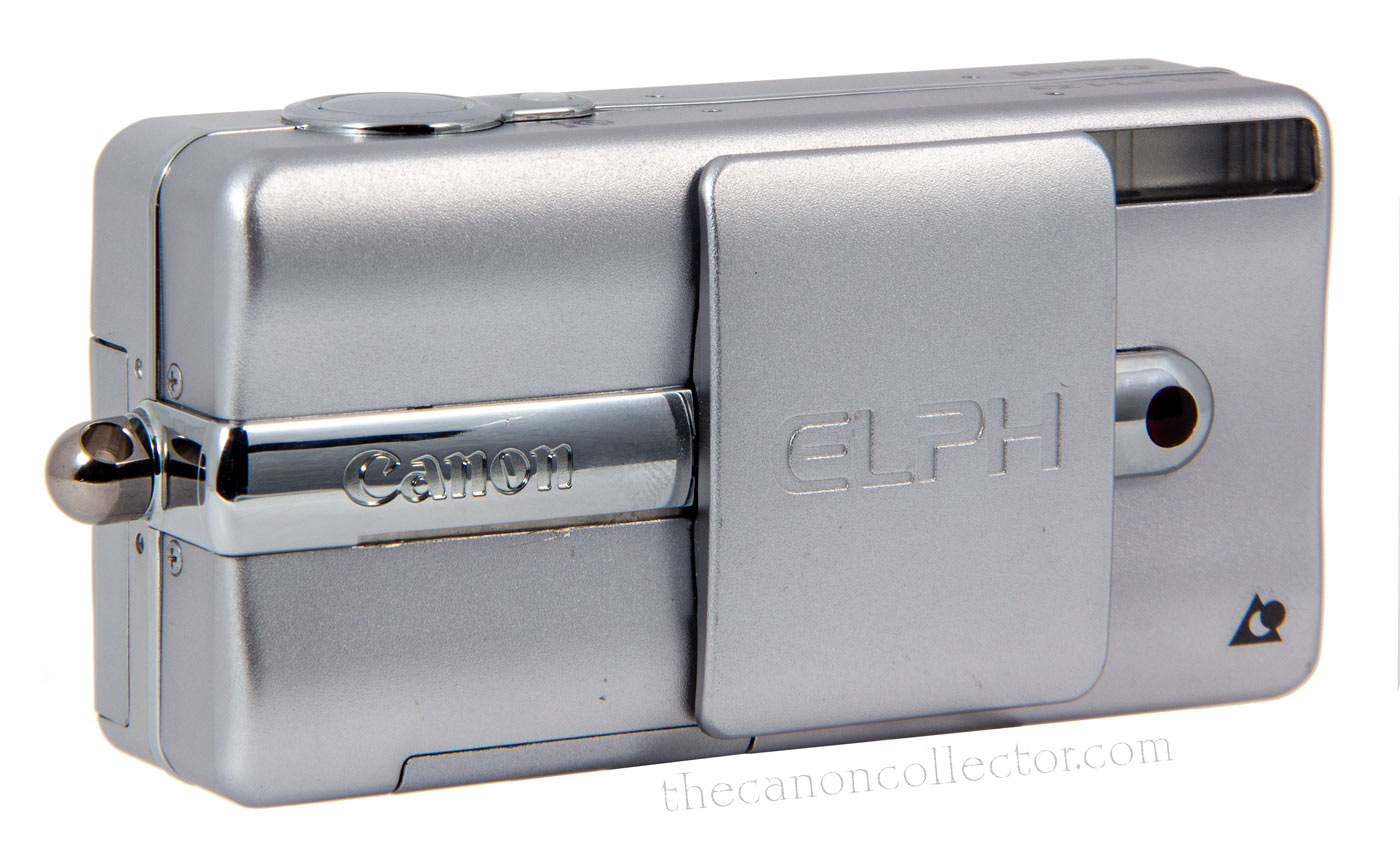 Canon, like many other manufacturers, saw the advantages of the APS system. In particular, they could create smaller, lighter and more convenient point and shoot cameras. And this they did with the Elph series of cameras, called Ixus in the European market and Ixy in the home Japanese market.

These are delightful cameras. They are compact and well made. In operation they are probably the simplest to operate of all Canon’s many models.  Starting in 1996 and ending in 2002 Canon came out with 16 models of APS Point and Shoot.

These cameras are listed in the following table. Cameras I have acquired are high lighted in blue.

I have been picking up these cameras at Goodwill Stores, camera shows and Craigès list for a few dollars. Some are not in the best condition and many don’t work any longer. Eventually I will have to replace some of them with better copies.