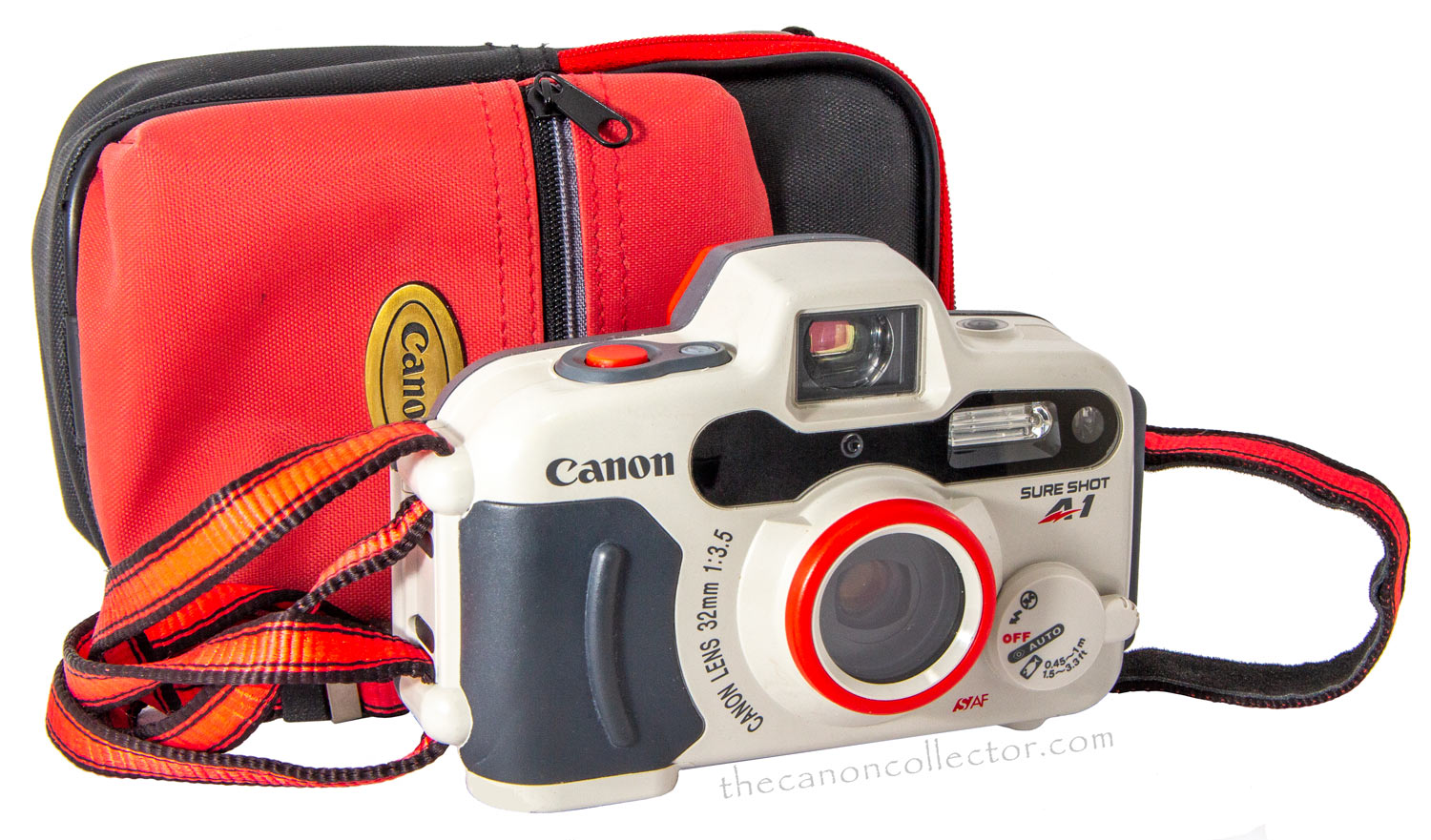 This is my Sure Shot A-1 camera (Serial Number 6900872) with its carrying case and strap. The camera is watertight and needs no additional waterproof housing. 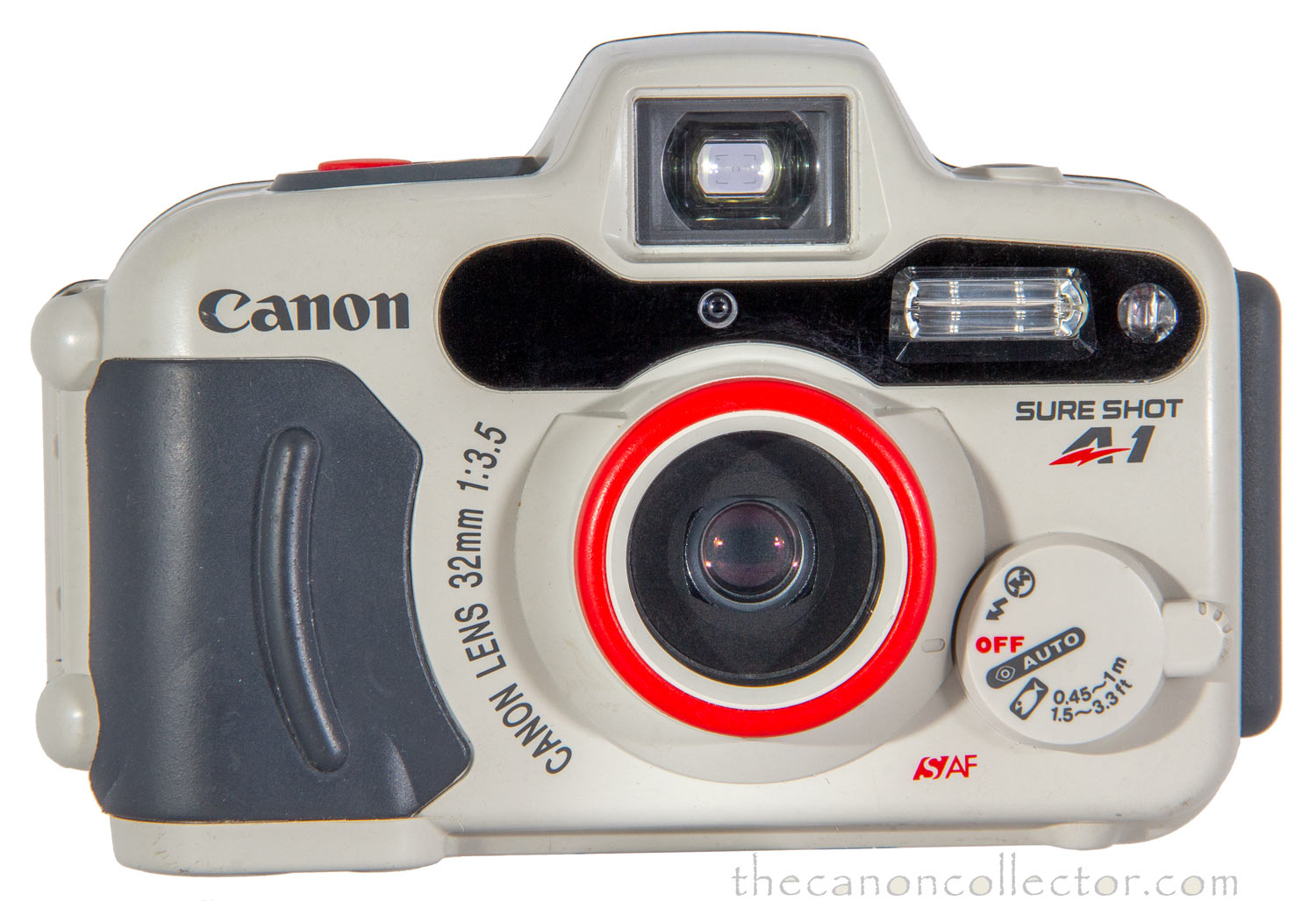 The lens, viewfinder and eyepiece are all sealed. The lens has a flat filter over it and any focusing movement of the lens is within the camera.

The top of the camera is totally simple. Film counter window is on the left, large red shutter button on the right, and the self timer button at the 10 o’clock position beside it.

The Sure Shot A-1

This is actually an accidental report. Following Craig’s
list, as I do, I came across a listing for a Canon WP-
DC800 underwater housing for a couple of
dollars. I already had one so I bought
this one as well and that got me to
thinking about underwater cameras, of
which I knew next to nothing. And when
I began to dig into the subject I found
that underwater photography is a thing with Canon. There are several underwater cameras and dozens of water tight housings for regular cameras. So this is the first of several discussions we will be having about underwater equipment.

Canon Introduced the Sure Shot A-1 in April of 1994. It was a sealed camera that could withstand depths up to 5 meters or 16.4 feet, according to the instruction manual. But it was not just for underwater use as it could be used in almost
any environment. At the beach, for example, if
it was dropped in the sand, no problem, just
rinse it off! Obviously a very appealing  all
around camera.

The lens is a moderately wide angle at 32mm
with an aperture of 3.5. The structure is 6
elements in 6 groups. Exposure settings go
from f/3.5 at 2 seconds to f/22 at 1/250th
second. This is all set automatically based
on sensed light level.

The camera sets film speed from the DX code on
the film can.  If you are using a film without a DX code the camera defaults to ASA 25. DX codes
from ASA 25 to ASA 3200 can be read by
the camera.

Out of water the camera focuses using a
three point infra red autofocus system.
However, underwater, the auto focus
system shuts down and fixed focus is from
3.3 to 9.8 feet (1 to 3 meters). There is also an
underwater macro mode focusing from
1.5 to 3.3 feet (.45 to 1 meter). 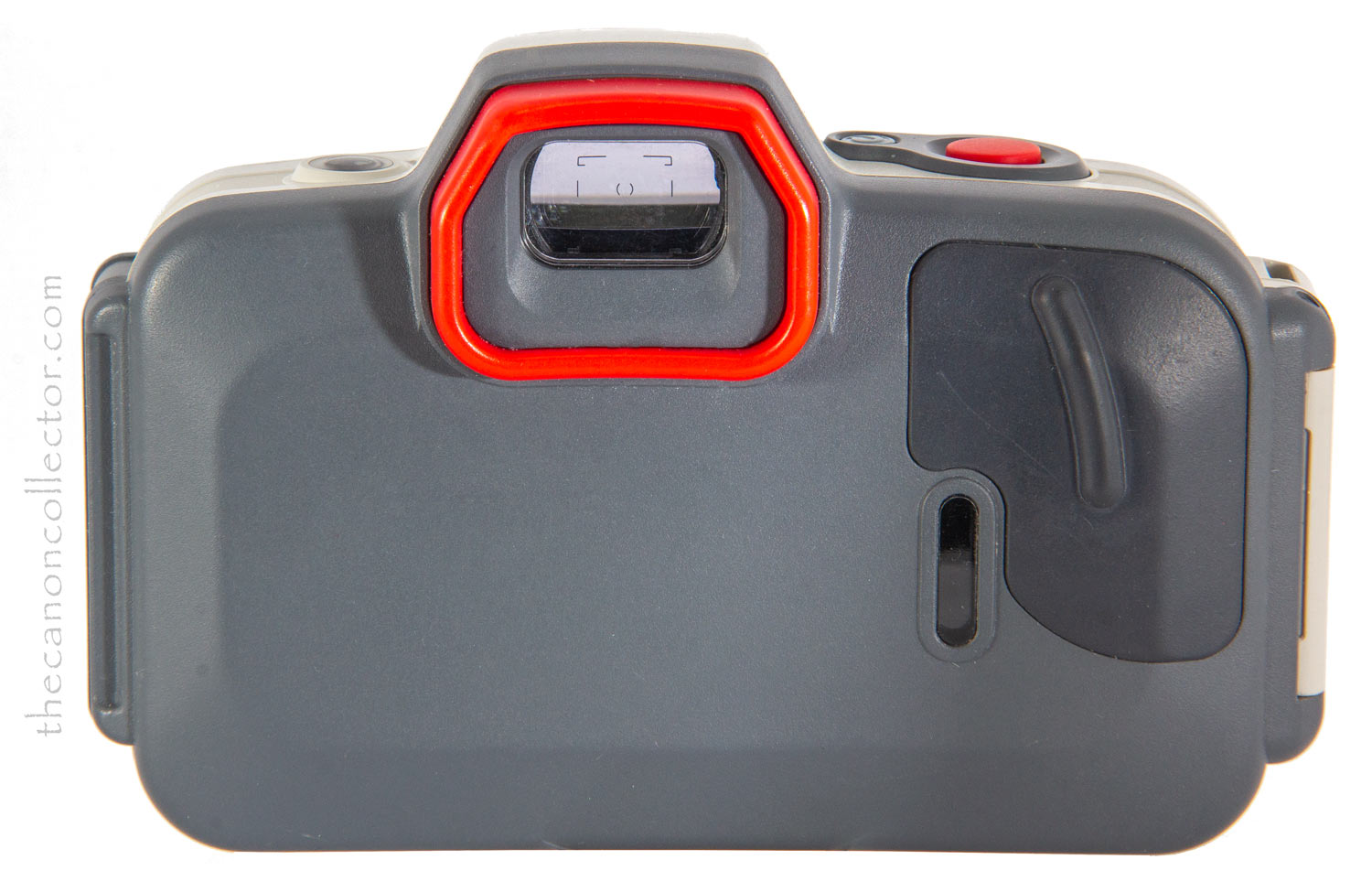 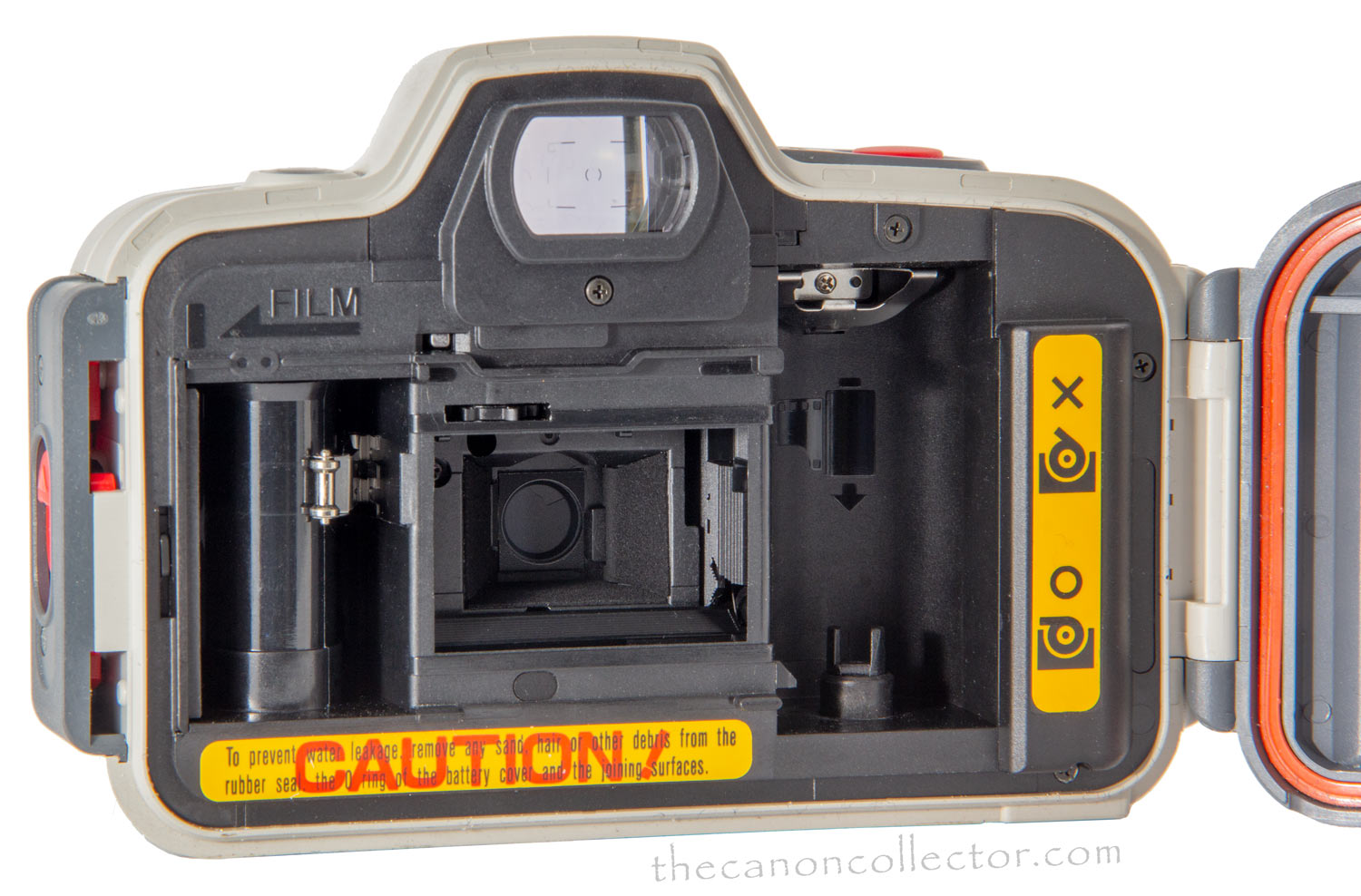 Inside the  A-1 is like any other 35mm camera. The “Caution” tape says to be sure to clean the seals before closing the camera. 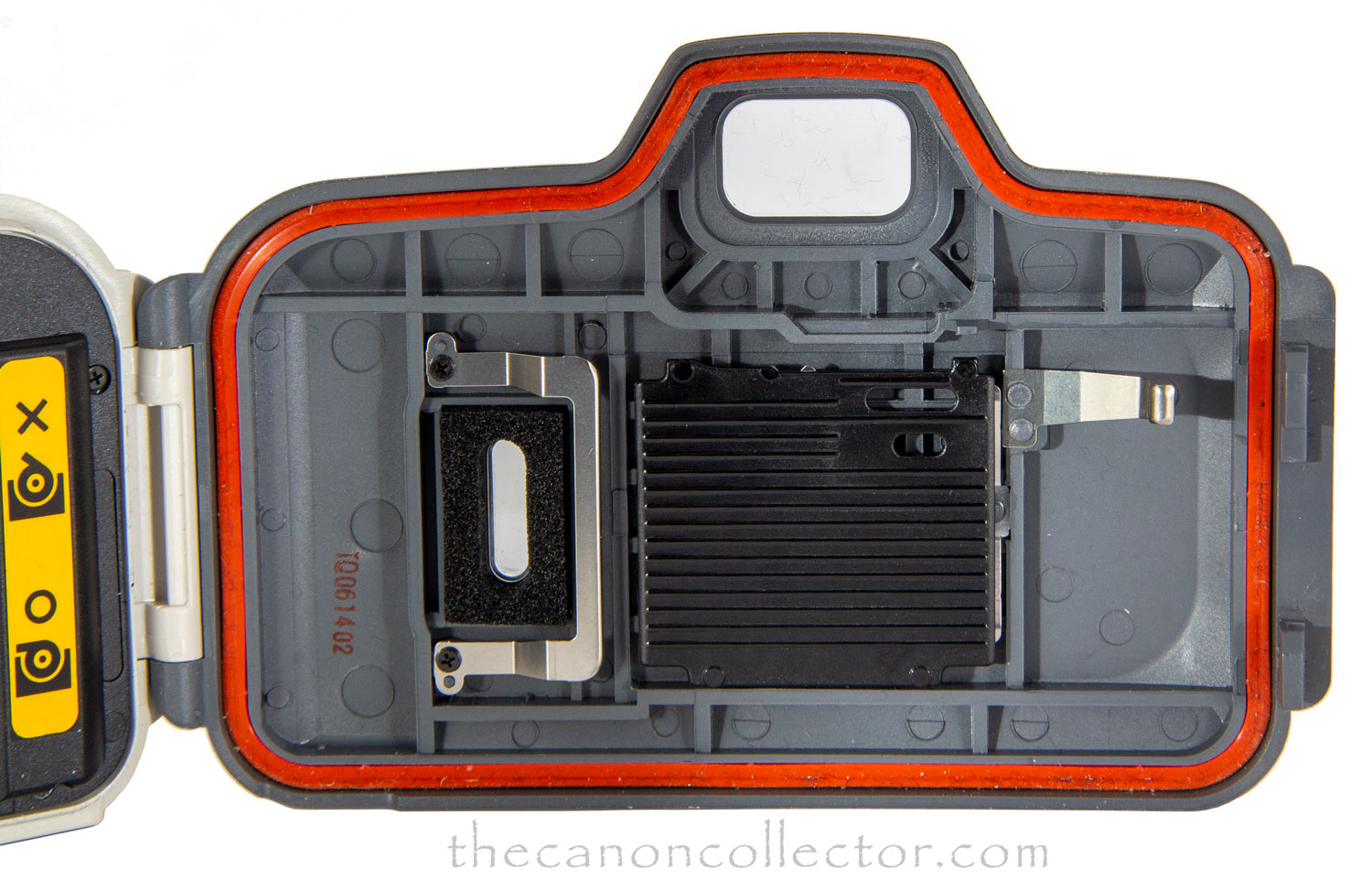 Along the edge of the back cover is the red “O” ring seal needed to keep the water out. The back is hard to close as it compresses this seal. 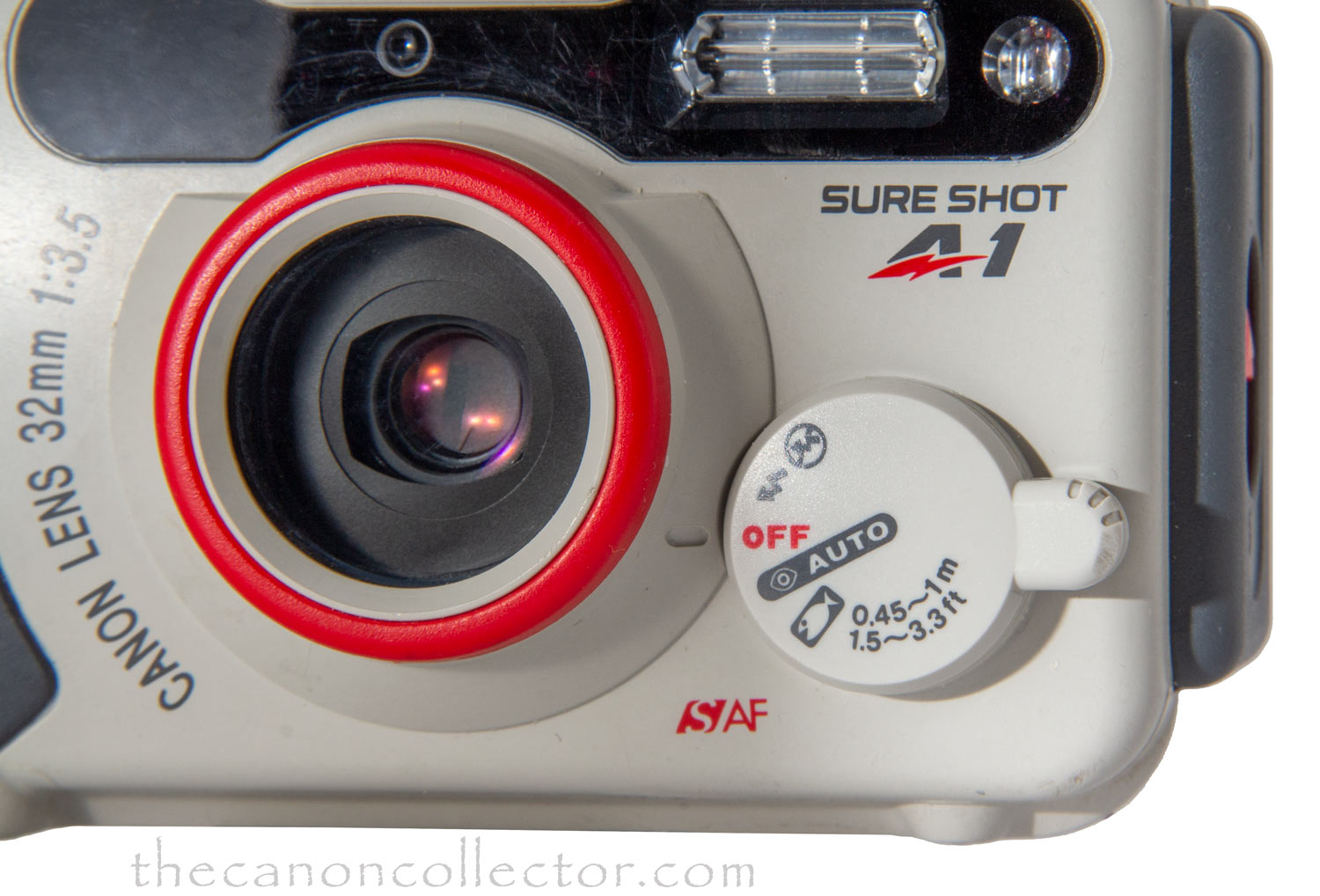 The dial on the front with the large tab is where all camera functions are set. The only functions the user controls are really only on or off! 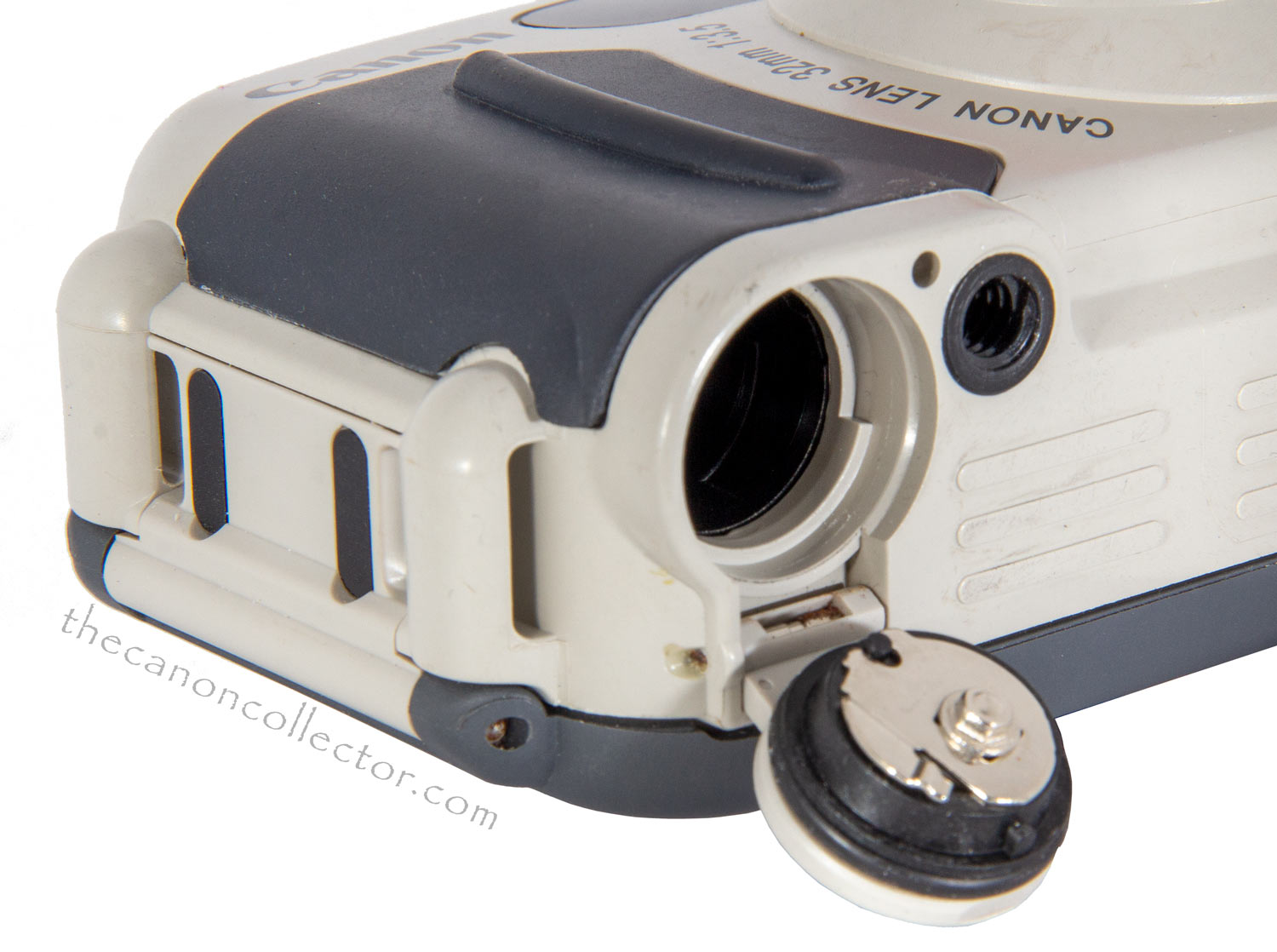 The camera takes a Lithium CR123A battery. The battery compartment is on the bottom. Notice the rubber seals on the compartment lid. 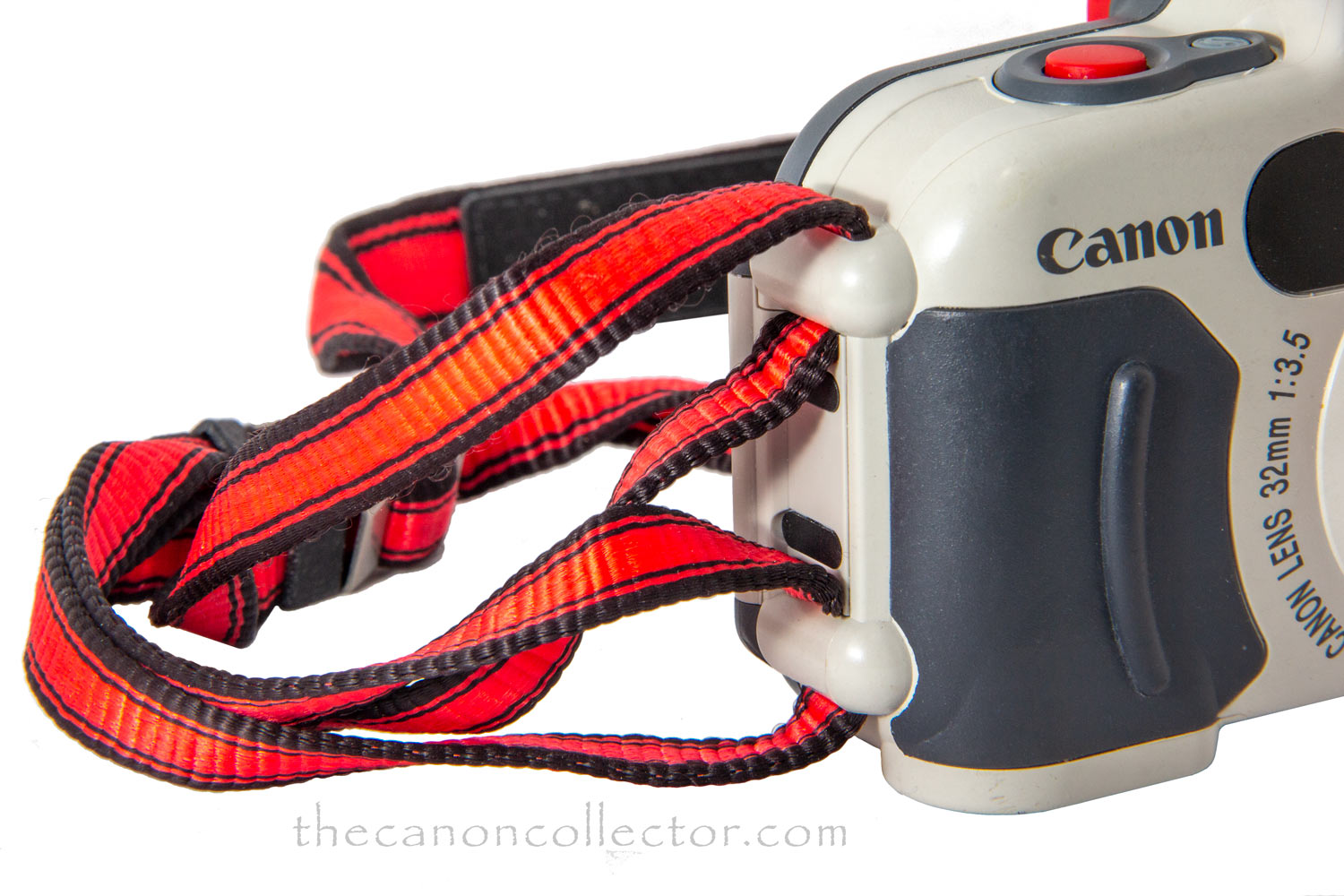 The A-1 came with a very heavy duty strap, much more substantial than one usually finds. And it came in a handsom canvas case

The camera back has an “O” ring around the edge which is compressed when the back is closed creating a seal to keep out water. However, this means that considerable force is required to close the back and the latch to open the camerqa is not easy to more. The User Manual warns the user to ensure to keep this area clean and dust and dirt free.

The user is instructed to have this “O” ring replaced every two years and possibly every year if the camera is getting hard use.

Another interesting feature is the long eye relief of the viewfinder.  You can use the viewfinder even if you are wearing googles or a face mask and you cannot get the camera right up to your eye.

As I have said many times in these pages, this is not intended as a full review of this camera. It is just a description of the A-1 and some of its features. I have not really tried to use my A-1 and I am not certain it works. The seals are certainly old and may not be water tight.

This camera is a little different and if you want to use one you should really spend time reading the manual carefully from cover to cover. This is especially true because if you do things wrong you may end up with a ruined waterlogged camera! 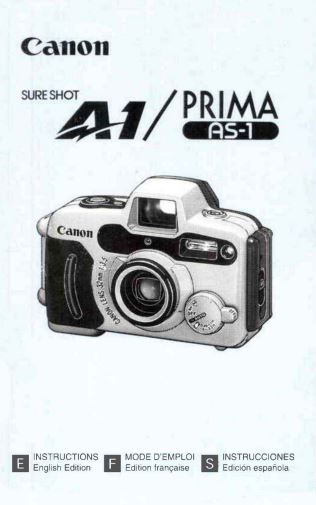 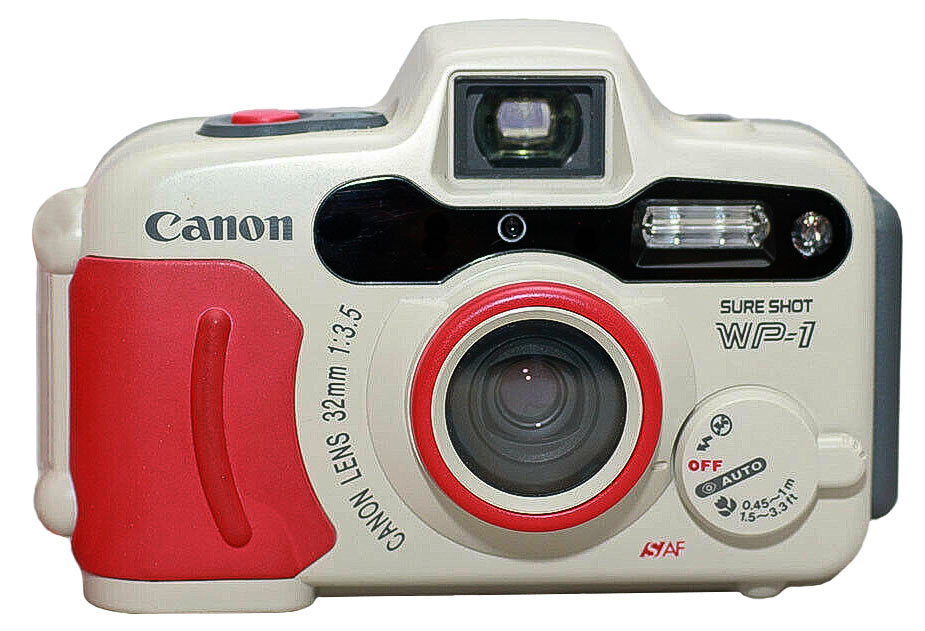 This is the Sure Shot WP-1. The only difference I can see is the red finder grip and what is written in the User Manual.

The Sure Shot WP-1

And now for a little quiz: What Canon Sure Shot camera cannot be found anywhere in the Canon Museum? (Well, at least I can’t find it!)

You are right: the Canon Sure Shot WP-1. And I believe it is missing because its called the A-1? Well, there seems to be a lot of differing opinions on the matter on the internet. On the left is a picture of it. Look familiar? It should if you have been reading this page! It looks to be identical to the Sure Shot A-1. And if you compare the manuals for the two you will see that whole sections of the A-1 manual have been carried over into the WP-1 manual.

However, at page 6 in the WP-1 Manual we find the following: “This camera is designed to be waterproof and can be used in the rain or splashed with water with no ill 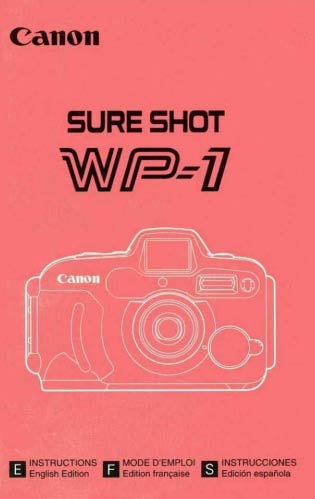 Compare this Manual with the one for the A-1 above. You will see the Manuals are very similar except for the “underwater” part.

effects. However, this is not and underwater camera.” (the added emphasis is mine) So what is going on?

I don’t have a WP-1 (yet) but I have looked at every single one listed on E-bay and examined all of the pictures and I can see no fifference between the two camera. Even the User Manuals seem identical except for the “underwater” part. Oh, and the red finger grip is different. The A-1’s is black.

If you search on line you will find conversations were people say they have used the WP-1 successfully underwater and many people simply assume the names are interchangeable. So what is going on?

I have a theory but it is a pure guess on my part. I think that people began using the camera underwater but they were not careful enough keeping the seals clean and they were flooding their cameras. As a result I think Canon began getting complaints and camera returns and unhappy customers. So I think they simply changed the name of the camera and published a new Manual that said this was not an underwater camera. That got Canon off the hook with customers. If someone flooded the camera the Company could say, “See, we warned you!”. Problem solved.

I have no idea if I am right but I think it is a good guess. So, is it an underwater camera or not. I think the answer is yes, but at your own risk. Canon has warned you. And I recommend reading the instructions carefully and follow the recommendations about cleaning the camera and seals. I doubt you can still replace these old seals so you are on your own there. As for me, I intend to try my camera but not underwater.