Our island retreat in the Gulf of Georgia. Fourty years and four generations it has been our summer place.

I first heard about Valdes in 1970 when we were living on Wilmot Street in Coquitlam. Grandpa and Grandma Marr came over for dinner and Grandpa Bill began talking about this island that he had obtain a government lease on. In those days you could lease government land if it had not already been claimed. It was a hold over from the old homesteading days when people could simply stake land and register their title. By the 1960’s all of the waterfront south of nowhere had been staked and there was none available. However, Grandpa had come up with government leasehold waterfront. Here’s that story. 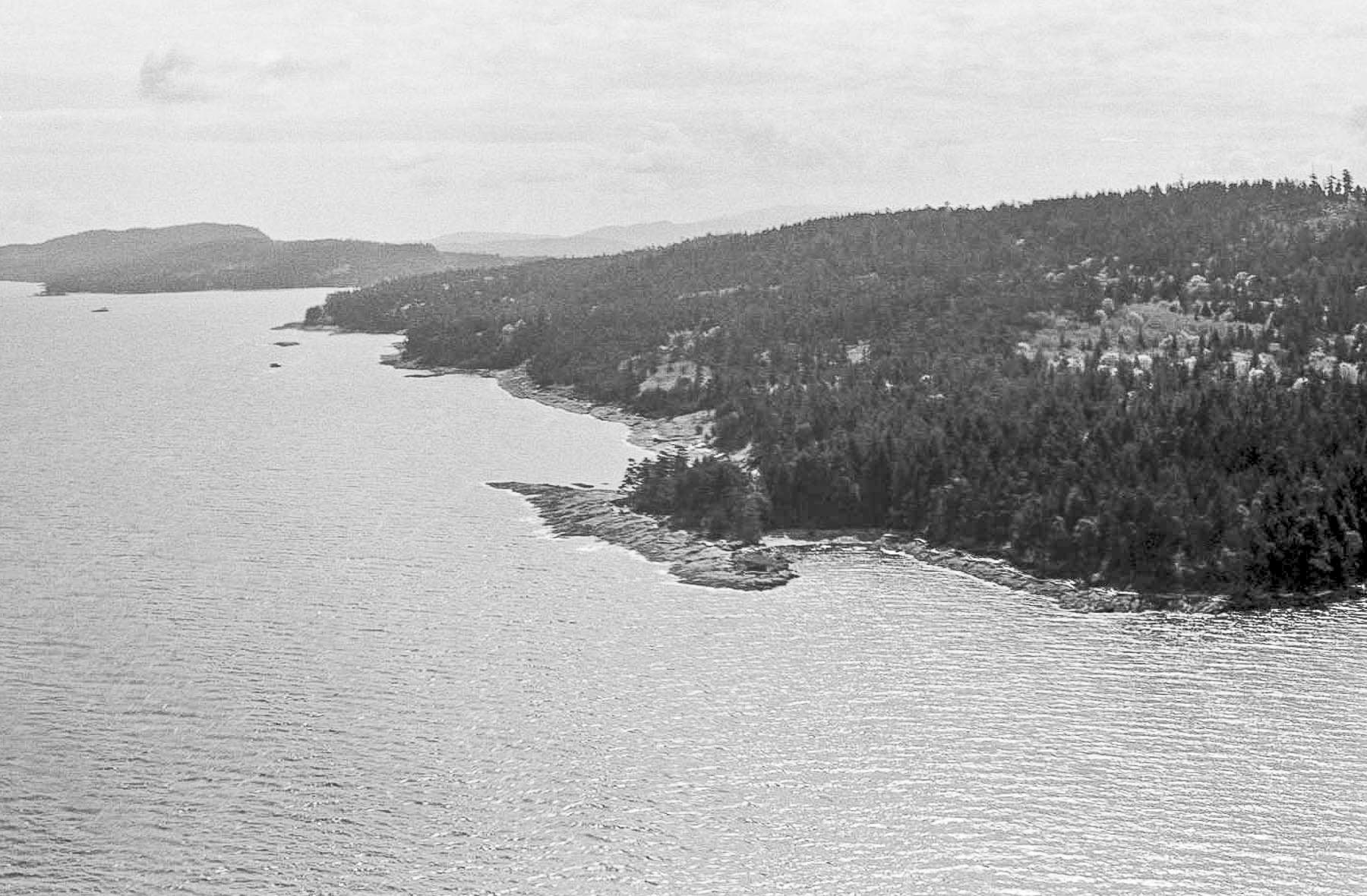 When Grandpa went to UBC to study medicine in 1937, or thereabouts, he had to board near the campus because it was too far from Langley to commute. Remember that there was no Highway One and the Patullo was a brand new bridge. It was a major journey from Langley to Vancouver.

He boarded with a family by the name of Detweiller who lived out towards UBC. He shared a room with Lloyd Detweiller, a son of the family, who was also going to UBC. Every morning they would drive to class in an old car that Lloyd had.They became good friends and, as it turned out, life long friends.

When the war began they both entered the service. Lloyd ended up flying for Coastal Command protecting convoys and, as we all know, Grandpa ended up flying with Fighter Command in England.  After the war they picked up their friendship where they had left off. 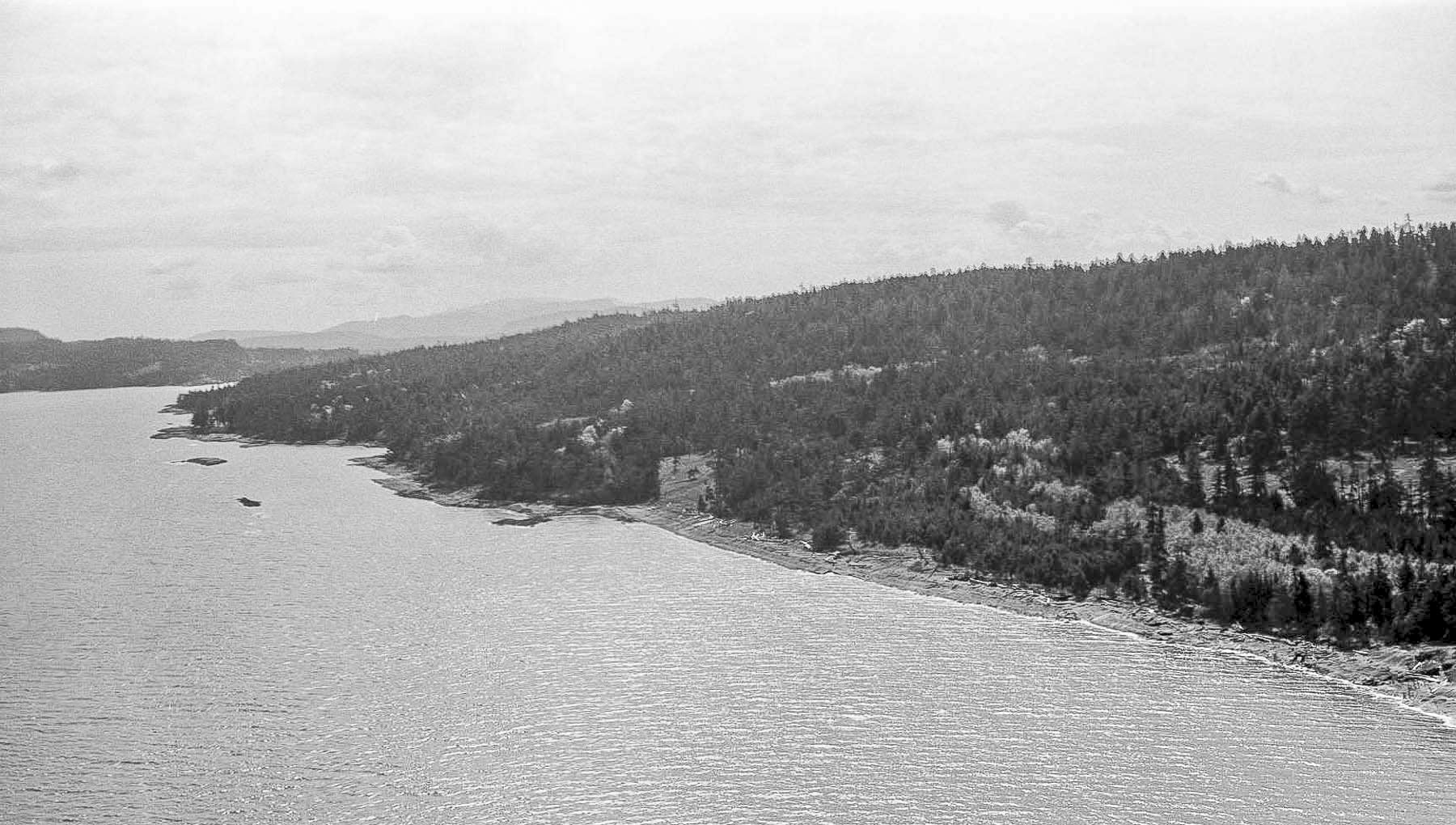 My first view of our property. We are looking up the cut to where the cabin will be in a year or so. The beach is wild. No cabins, no people, no anything. Perfect!

Fast forward to about 1967 or 68. I don’t know what Lloyd was doing but he had a government job and in the course of it he was asked to  search out all the government land presently leased out which involved him in going through records in the Land Registry Office. Now, in those days you could homestead government land. All you had to do was survey it, stake it, register it and pay an annual rental. There were a few rules. Within, I think, two years you had to build an “habitable dwelling” on it. I don’t believe that was ever enforced on Valdez.

The problem was, all the waterfront anywhere near the Lower Mainland was already staked out and there was no land available unless you went way up the coast or inland. 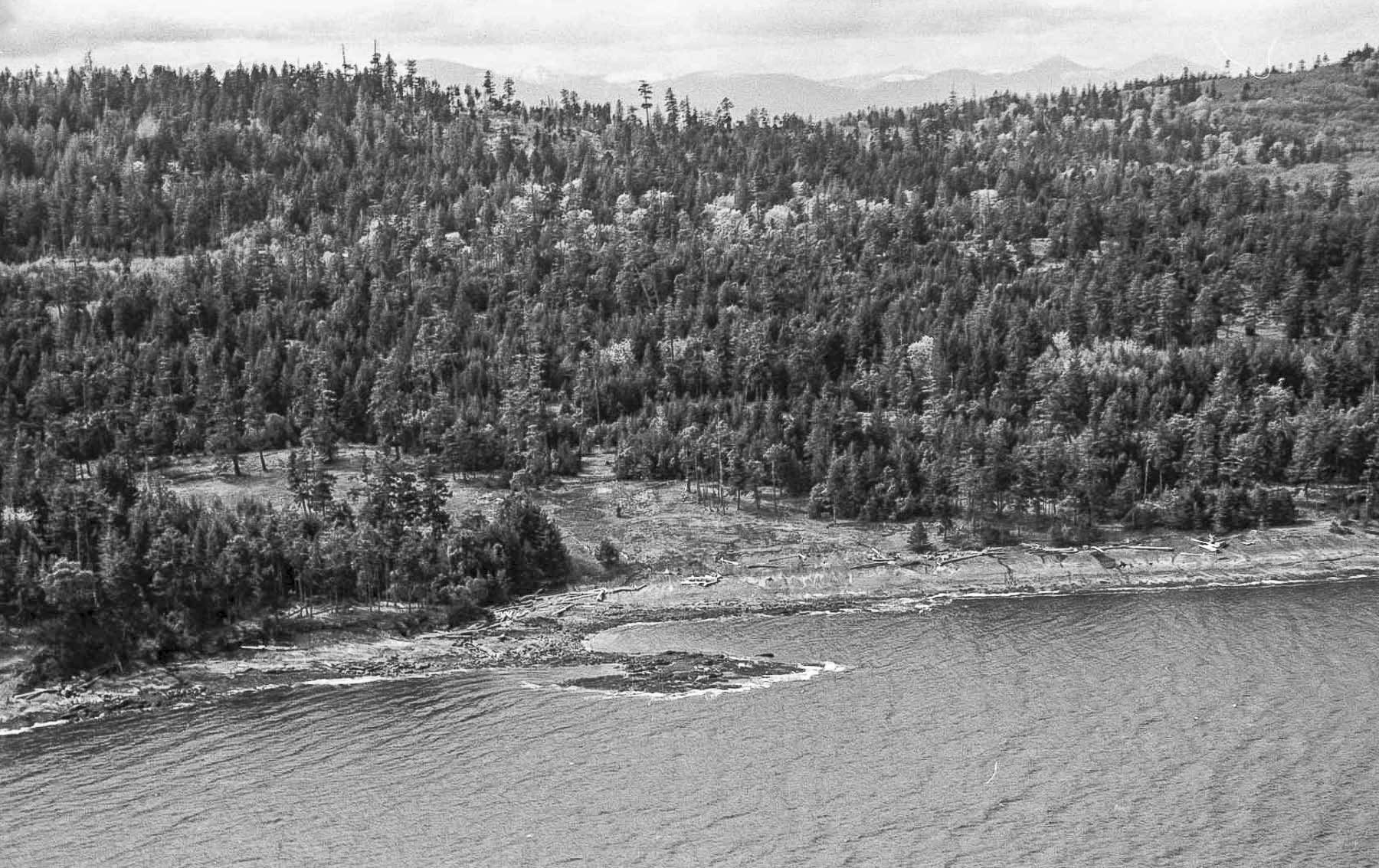 In the early years there was no one else and this was our beach, although it was a few lots north of us.

However, Lloyd found this strip of land on Valdez that government records said was leased out but the Land Titles said was still in Government hands, unstaked. It was available!

There were limits on how much a person could take and so I think to stake the whole piece Llyod needed 25 or 30 friends to go in with him. I am not sure what the number was but he needed people to help cover the survey costs and take the individual titles. And so he approached Grandpa Bill, among many others, to take one of these pieces.

The original deal was that, all of the original owners being friends of Lloyd, all would share in the survey and staking cost and that would be the cost of their piece. Of course, each would be responsible for all rental fees, taxes and so on from that point. Anyone who wanted to sell was to offer it first to the others and only then could he sell it to another party. Sale price was to be simply their accrued cost in keeping the land without any profit taking. This was a loose agreement, not in writing, and I am not certain how many understood this. Anyway, it never worked.

Grandpa did not know the island and all he had to help him chose a piece was a large survey map of the whole strip showing the survey stakes and pins. So he chose our site without having seen it or the property. They all looked the same!

And that is how we got the property on Valdes. It was put into my name and was to be for our family to use and enjoy. Which we have done!

However, having it and getting to it are two different issues altogether. The first time I saw 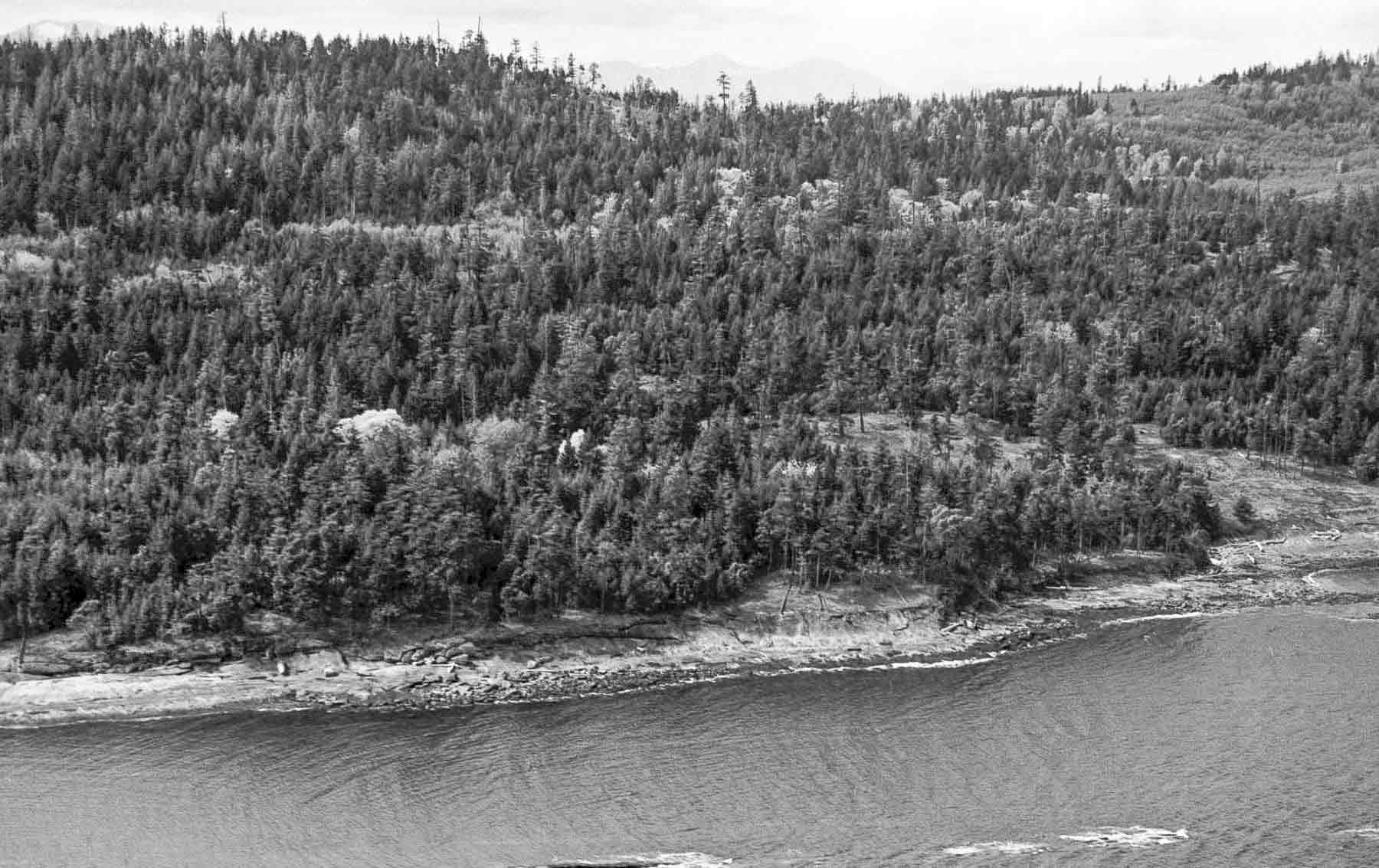 This is the front of our property and the location of the new cabin the kids have built.

Valdes, and I think it was Grandpa’s as well, we chartered a plane and flew over. With the survey map in hand we set out to find our property and the pins that bounded it. In those days the corners of the lots were marked with nice fresh triangular survey stakes painted white. In most places there was no soil so the were held in place by little piles of rock set up to hold the stake. The stakes have all weathered away but the pile of rock still exist in places and , of course, the iron pins are still in the ground. But try and find them! 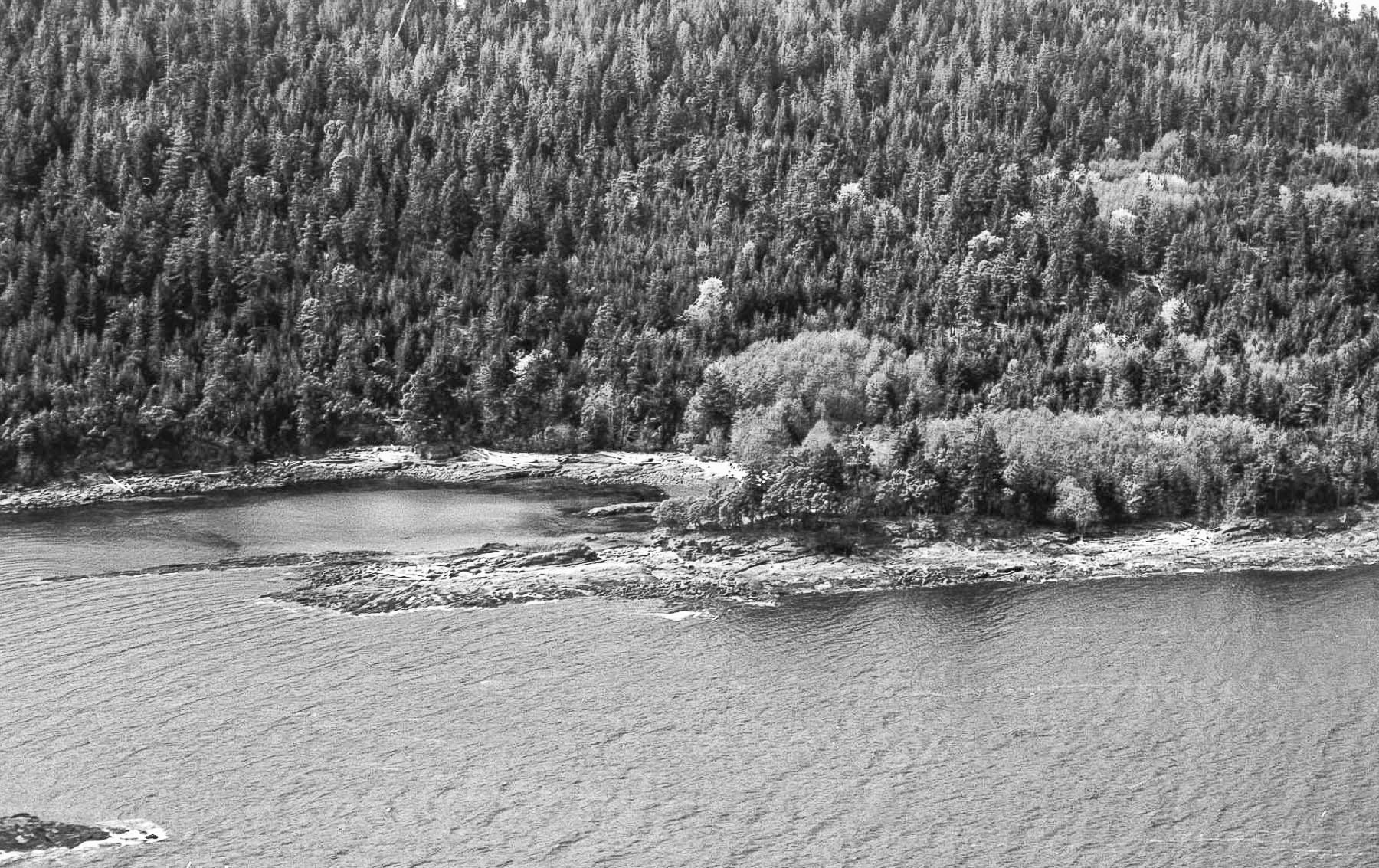 We originally knew this bay as Oyster Bay. It was eventual named after Gordon Noel as Noel Bay. 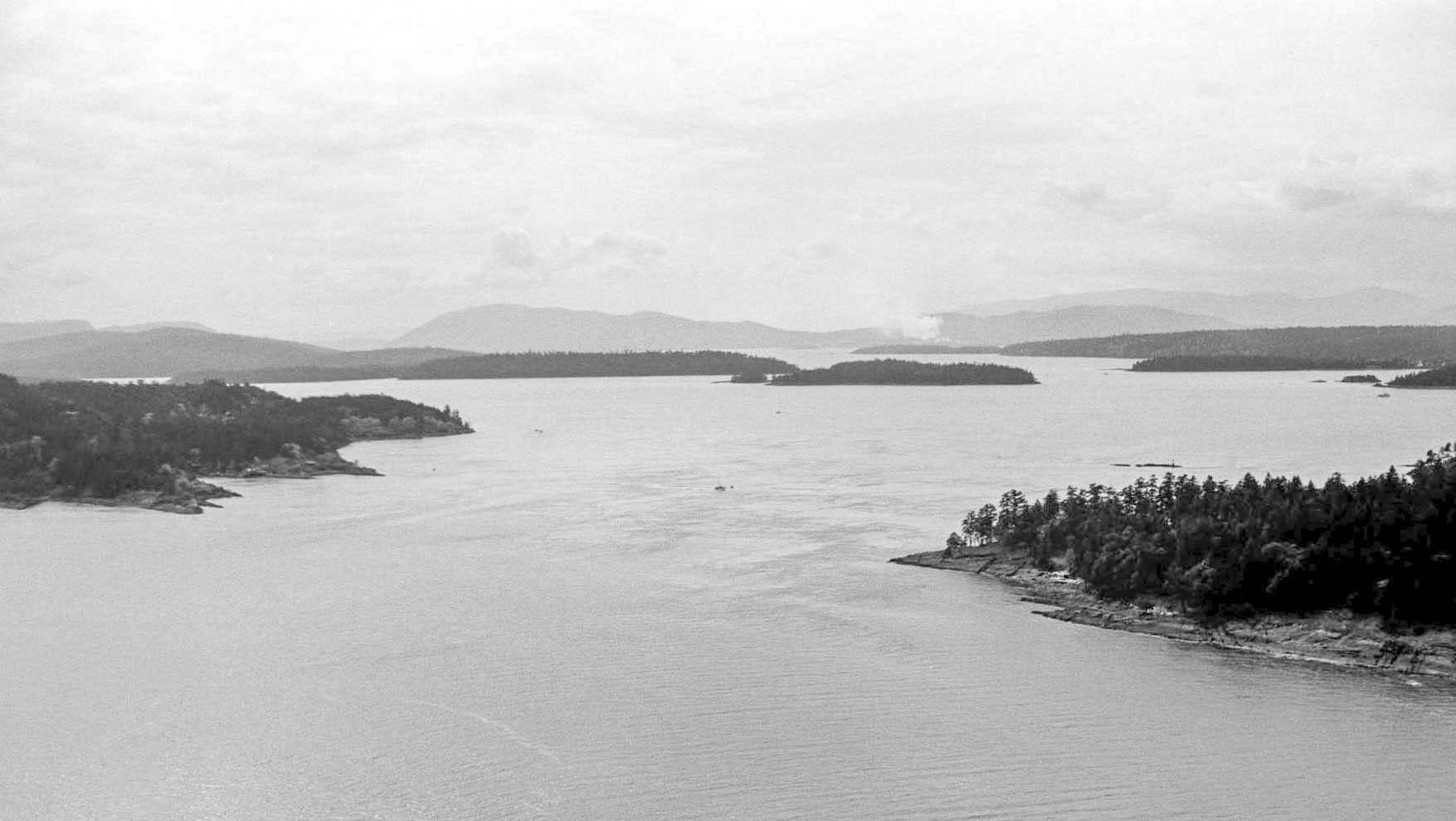 The south end of the island and the infamous Porlier Pass.

We found the front pins first because we were searching along the beach where travel was easy. The lovely trails that exist through the back did not exist then and the salal was much thicker than it is today. (It was Grandpa who cut the first trail from Oyster Bay to Detweiller Point and Starvation Bay) We had trouble finding the rear pins because we had no compass and we got the angle of the lot lines wrong. However, we eventually found those too, because they were so visible in their nice white paint.

And that is the story of how Valdes came to a part of our family. So now we can turn our attention to how we came to use it and spend our summers there.

A note about the pictures. In those days I developed all of my own pictures using black and white film. Basically, color film was too expensive and I could not process it my self. So these early photos are not in color. And most of them you will not have seen before. So this is going to be a fun story to tell.